Aloha all,
It’s been a while! As I just got sent off to college and no longer on island I got bored because I can no longer fish so why not write about it. I hope you all got the

off your back… if not it’s okay, the time will come sooner or later. Now to the report! The fish are definitely here, just gotta be at the right place at the right time.

06/8/21 - On board the beautiful Dana (30’ Knife) captained by Uncle Brendt the legend! It was my first Ahi trip of the 2021 season. Loaded the boat with ice around 7:30-8 am and headed off north/west with no plan. Uncle asked us “so what where you guys like fish, west side in flat water or Haleiwa in the rough water” and I quickly responded Haleiwa (knowing Waianae is always hit or miss). So off to Haleiwa we went, arrived around 9:30 and was in the water by 10. Shot it straight out to J buoy and the wind was ripping at least 25! Birds were all over and the Ahi’s were exploding, it was only a matter of time. After 30 mins or so working the pile boom rigger slams but comes off. Pile runs off so we zig zag through the area where we knew the fish were and sure enough the lines start ripping! Get them in the boat, turn up seas, and start setting up again. Not even 30 seconds later while letting out the rest of the lines the short corner slams and we’re on again. In less then 15 minutes the fish is already welcomed aboard. Took 5 strikes total in a hour and a half called it a day and headed home early! It was one of those lucky days. Mahalo uncle Brendt for putting us on the meat! 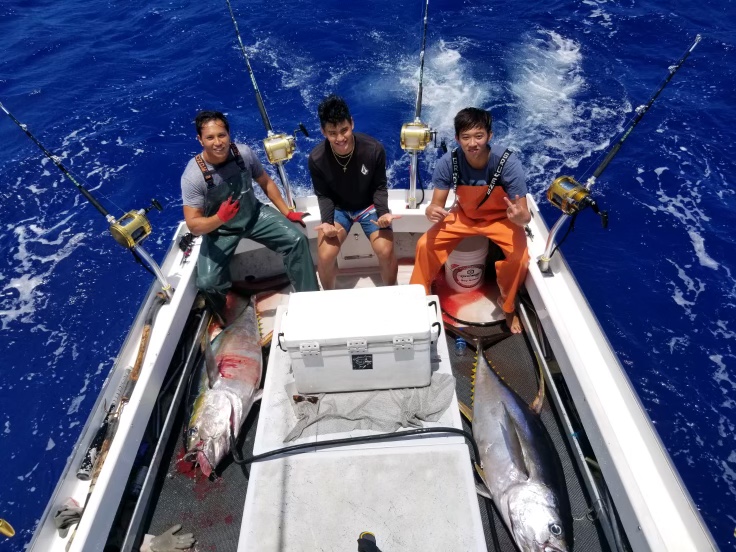 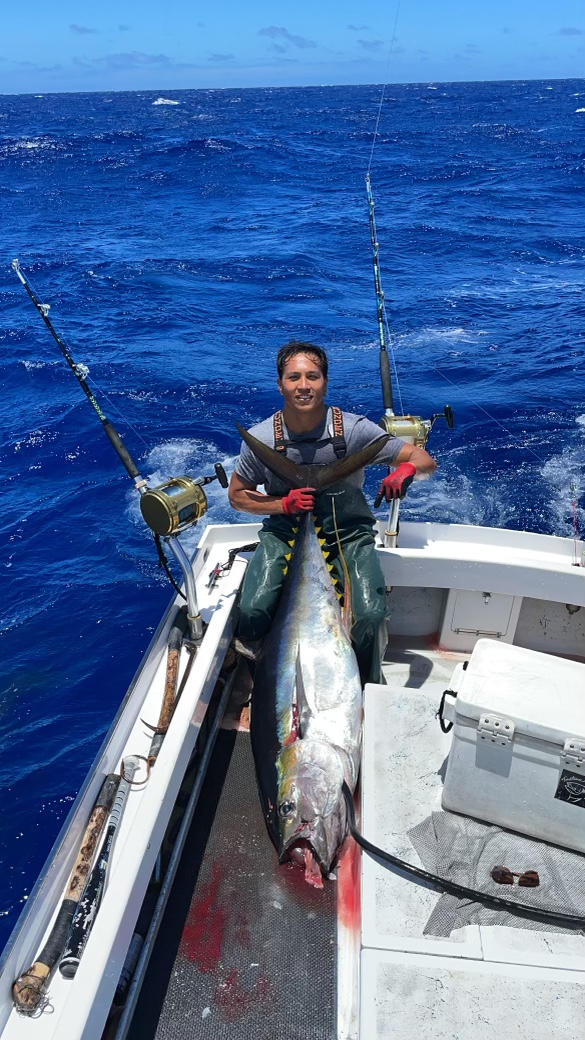 06/12/21 - This day I joined my Uncle “OP” who has a 25’ Parker named the Kehaulani. Heard the fish were biting good the day before so we had high hopes. Harbor was packed to the max so the word must’ve traveled. Launched before sun break in hopes to get the morning bite. Headed straight pass U and up to the 1,000. Needless to say it was dead all morning in between U and MM which was the area everyone was working. No birds no nothing. No boats stopped all morning so we decided to go to LL and catch some dinner. Middle rigger slams in the blind a mile before arriving to LL but came off. Set back up and we continue on. Marked tons of fish but no bites on the big lures so we downsize and load about 20+ 8-10 lb shibis and akus. Figured it was enough we headed back over to the area we worked in the morning in hopes to find the big guy. Capt takes a nap so I take the wheel. Majority of the boats called it quits already but some were still around. Trolled around for 3 hours in between the 1,000 and 1,300 and nothing. Everyone on board seems kinda over it already so I tell Capt let me make one more pass in the inside. You could tell their morale was very low by looking at their faces. I make a straight line down to the 800 and turn up for the one last pass. As soon as we pass the 900 the middle slams down and we’re on. Fish decided to bite the black reel instead of the other 4 130 shimanos so it took a little longer to bring him in. Boated the fish G&G and pushed throttle home. 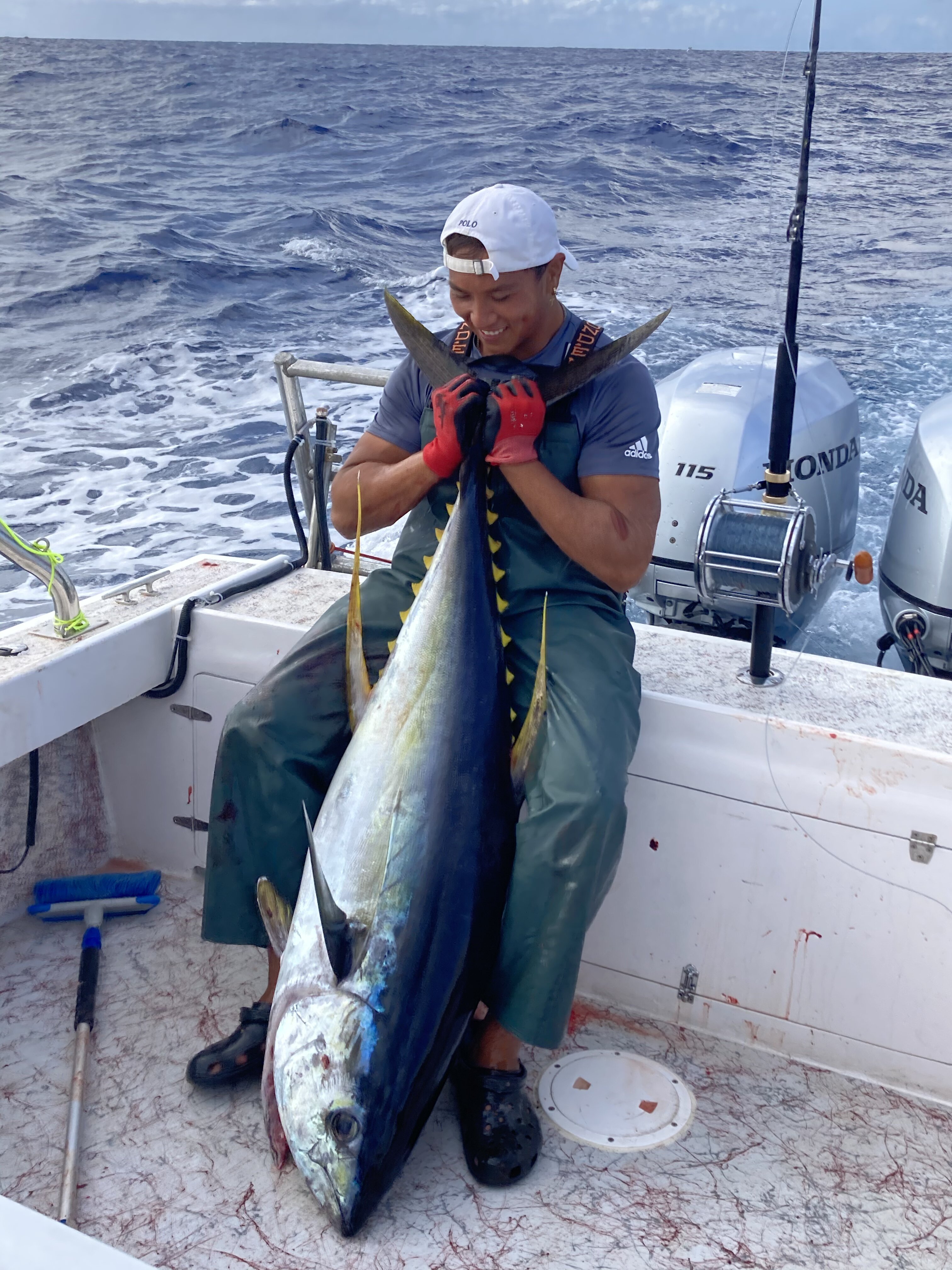 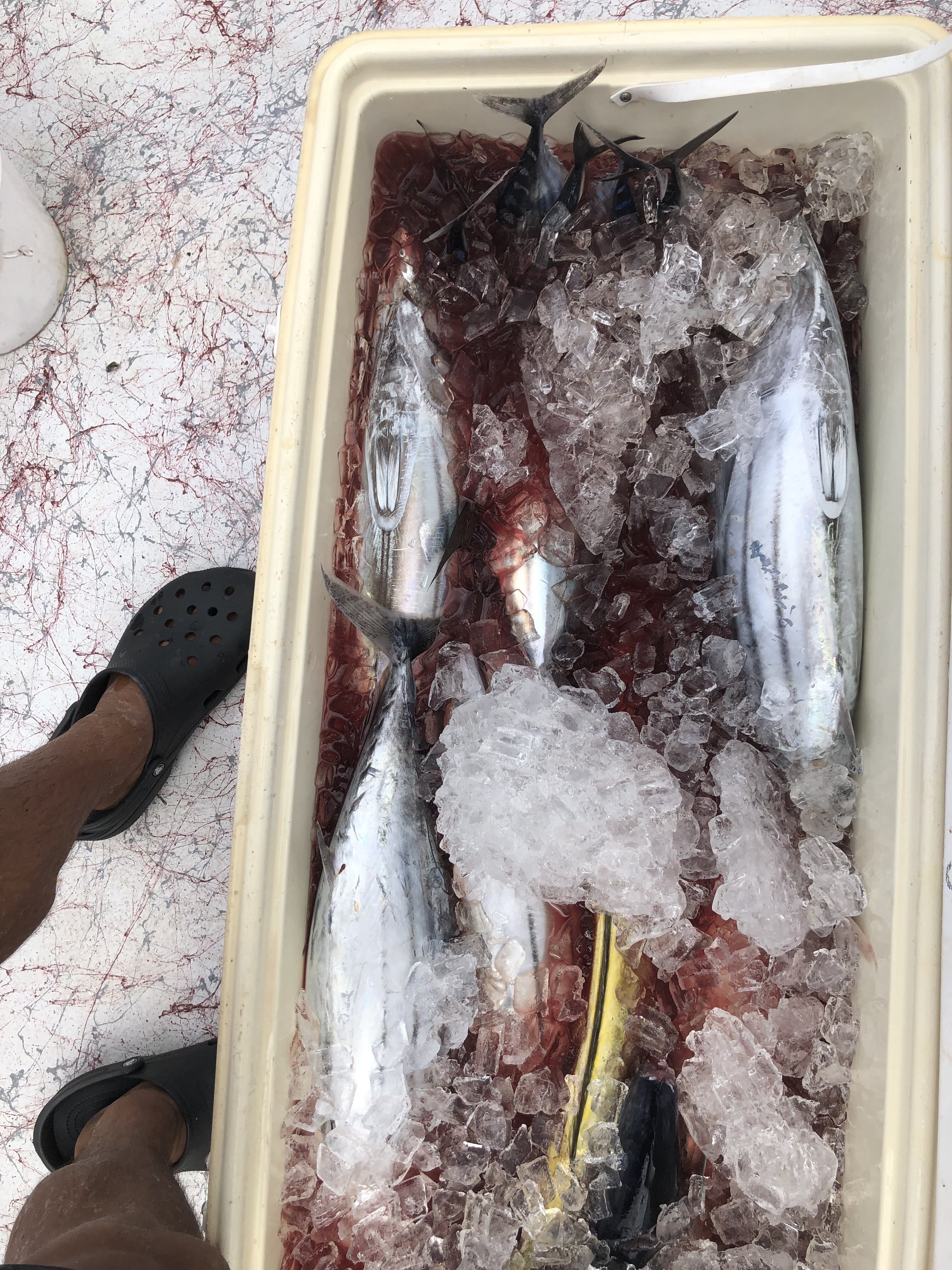 06/20/21 - Father’s Day Waianae. Launched Ko’olina on board Uncle Eric’s (E&L Lures) boat with my dad in hopes to get a Father’s Day Ahi. Knew the fish was somewhere in front Ko’olina as people have been consistently catching around the area for a couple days now. Headed straight out and picked up a ono early in the morning. Headed to the 1,000 then worked our way to the Ko’olina pinnacle. Boats were stopped so we knew the fish were around, no bites at the pinnacle. So we run the 1,000 back down a couple degrees to work around the area and boom rigger slams down. Same lure that caught the Ono is now hooked up with the Ahi! E&L Lures going off today (you can find him on Instagram and Facebook)! Boated the Ahi and the stoke was real. Dads were happy to say the least. It was the first Ahi of the season for Uncle Eric and also the first Ahi to be onboard his new boat! Pictured is my dad holding the fish up. 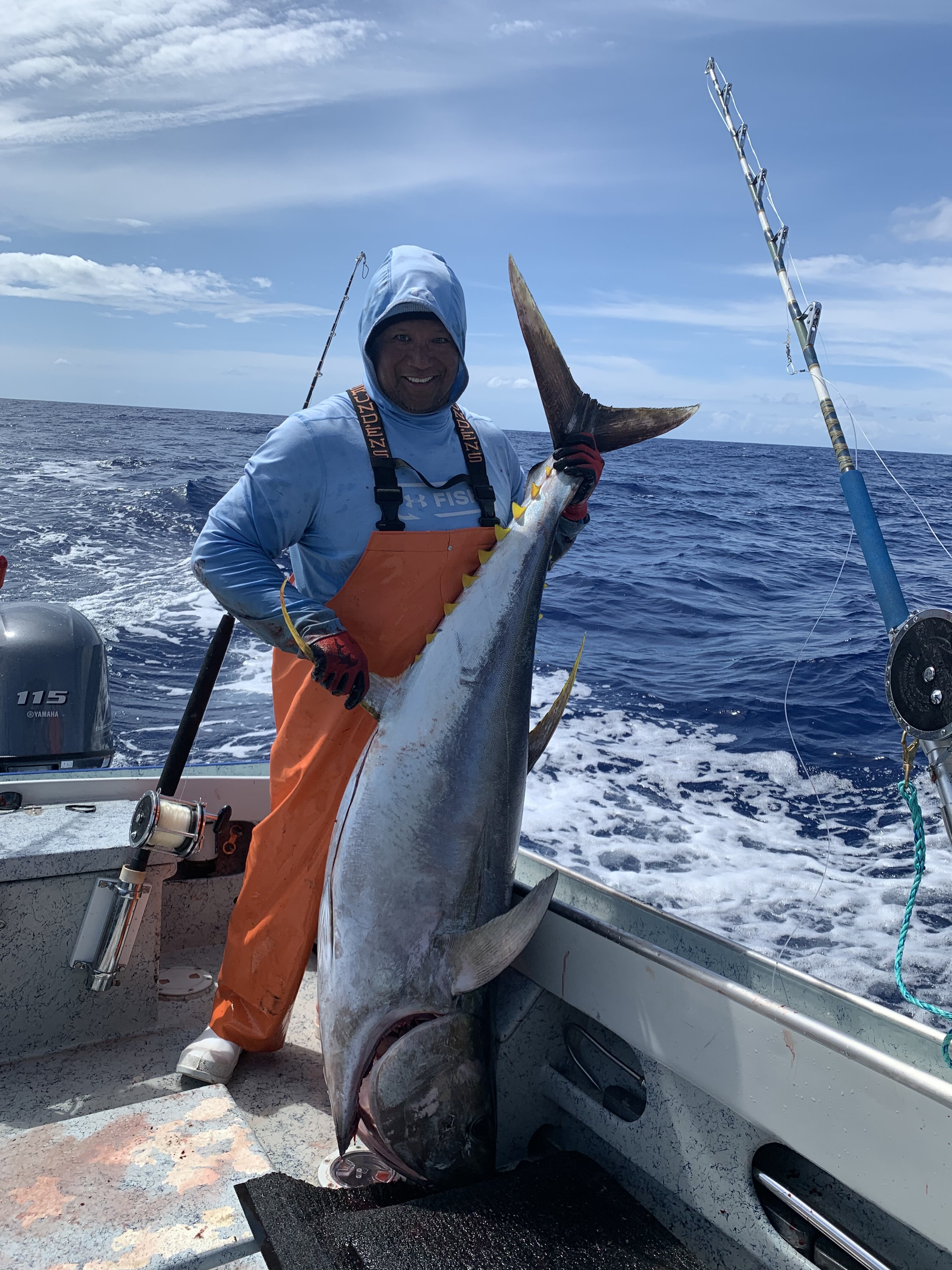 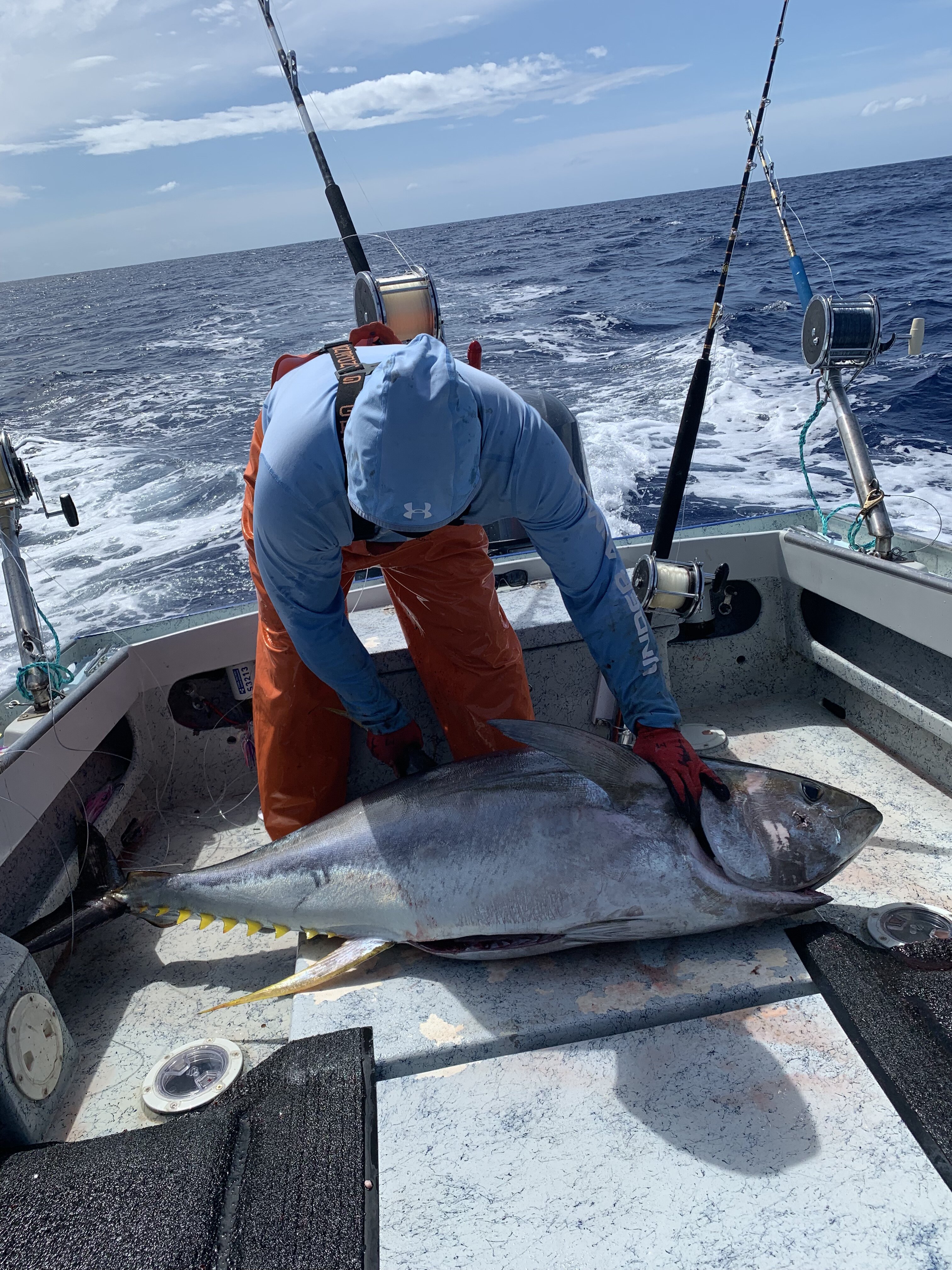 06/21/21 - Headed back out to Waianae but this time launched from Waianae harbor on my close friends 16 ft whaler! Thought I would help all my friends get the monkey of there back as I knew where the fish were. Got the boat in the water and everyone was sleeping but me. I Let the lines out pretty early around 5:30 on the 500 and headed straight towards the 1,000 then was planning to turn down where we caught the Ahi yesterday. Luckily we didn’t need to go Ko’olina way because once I passed a small pile on the 900 it was game on! Ratchet screams and the boys wake up to a fish on. I drive to let them fight the fish then hop on the leader when the fish is close. None of them have gaffed a fish before so it took them a couple tries but we got it in the boat! Headed in before noon!! Then straight onto my flight to the mainland later that evening. 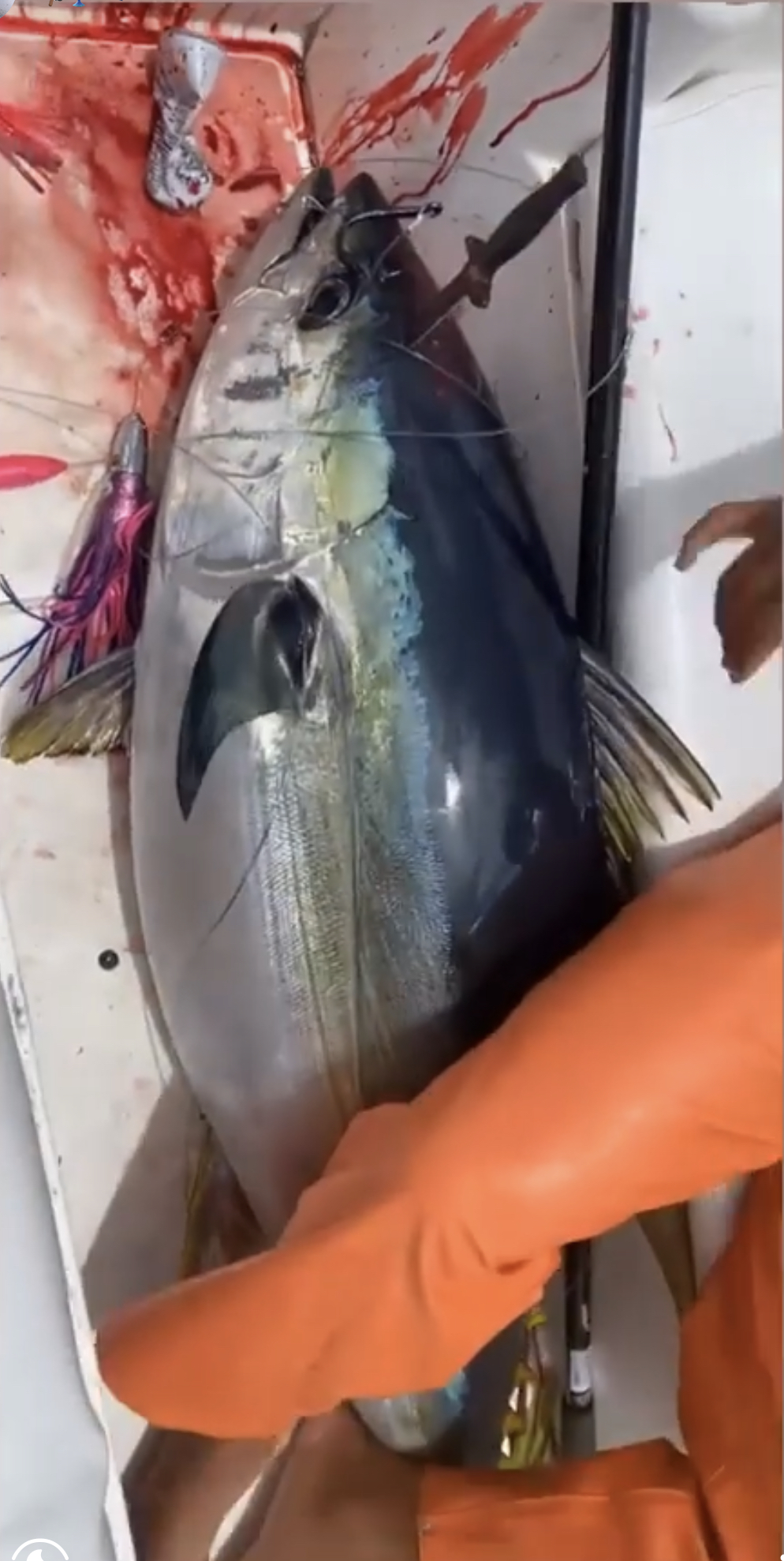 Its been a very fun month of fishing! Glad I could hanapa’a before I left. Wish you all luck for the rest of the 2021 season, hopefully they bite good soon! It’s full moon now, it’s only a matter of time.
You can watch videos of my catches on my Instagram @hiramdefriess
Last edited: Jun 25, 2021
Reactions: James bradley, mackereljoe, Matt S and 6 others
Upvote 1

BoomDown said:
Ratchet screams and the boys wake up to a fish on. I drive to let them fight the fish then hop on the leader when the fish is close. None of them have gaffed a fish before so it took them a couple tries but we got it in the boat! Headed in before noon!! Then straight onto my flight to the mainland later that evening.
Click to expand...

Cool helping your buddies get on some fish, and showing them how!

Let'a have a better day today, than we had the other time.
Upvote 0
G

Wow that is some good fishing & writing!