Boat headed out around 5:30am, loaded with 50 people for the full day off-shore adventure.

Lots of rental rods and people making their first off-shore trip. Some experienced folks as well, but I got the sense of the four full day boats heading out of Seaforth that his boat had the most novice anglers.

Captain RJ said we would start patrolling the BFT grounds west/outside the islands. Reports were showing YFT another 20 miles south, but that would be a long boat ride each way for a full day trip. So we got to the spot around 9 am and began circling the grounds.

After about an hour of nothing, captain said to start throwing bait. Nothing really happened, and we kept cruising. It was about 10:30 or 11 now, and I started to get that sinking feeling that this would be one of those days. The counts had dropped the previous day, so I was prepared for some difficult picking, but feared we would struggle to find the fish.

Those fears were misplaced. Our next stop we started a drift, and whammo, fish on. All of a sudden a bunch of bent rods. We proceeded to drift with that school for the next four hours. This was our only drift/stop of the trip. At times it was fire, other times just one or two biters, then it would pick up again. It never stopped, and we ended up keeping the school until another boat slide in to get their count up. Could have stayed there all day. Boils all around the boat as we were leaving...

Nice grade YFT, ranging from 20-30 lbs with an occasional larger model. As recent reports have shared, light flouro and small hooks were the key. I was fishing 20 lb flouro and a ringed size 2 J hook. 30 lb flouro and/or larger hooks were getting ignored. I don't believe a single fish was landed with a jig/stick bait/flat fall/etc. Live bait only.

I hooked into 10+ YFT. Lost the first one in a tangle, second one pulled the hook right at the boat. I was fishing straight braid to a small three foot leader. Captain told me to add a mono top shot next time to provide some shock absorption. Most battles lasted around ten minutes on a Trini 14 w/ Terez 8 ft rod. Good fights.

I ended up with four in the bag. The sun came out and eventually the swells calmed down. Ended up being an epic full day of fishing.

At some point, one person landed a random BFT, and then two Dodo got hooked and landed. Not sure where they came from. Finished the day with 100 YFT. Sadly some people on the boat didn't catch any, and refused to get help from the deckhands. Can't understand why. The captain felt like we could have easily landed 200+ fish.

Great crew. Great fishing. To top it all off, a freaking Marlin was jumping out of the water next to the boat on the return trip home. Amazing day. 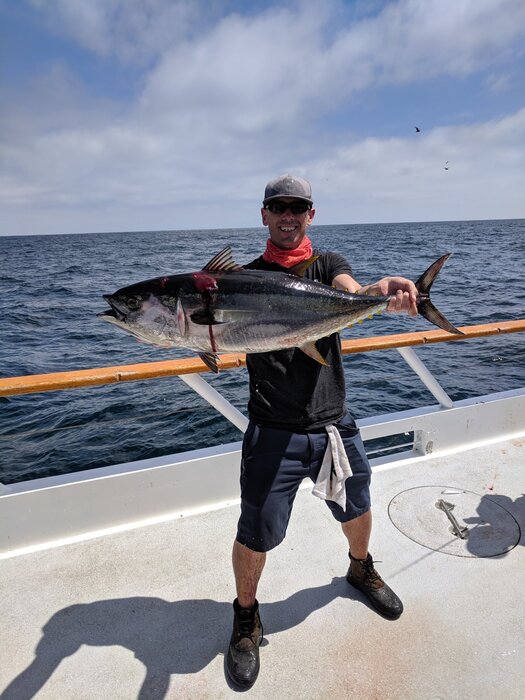 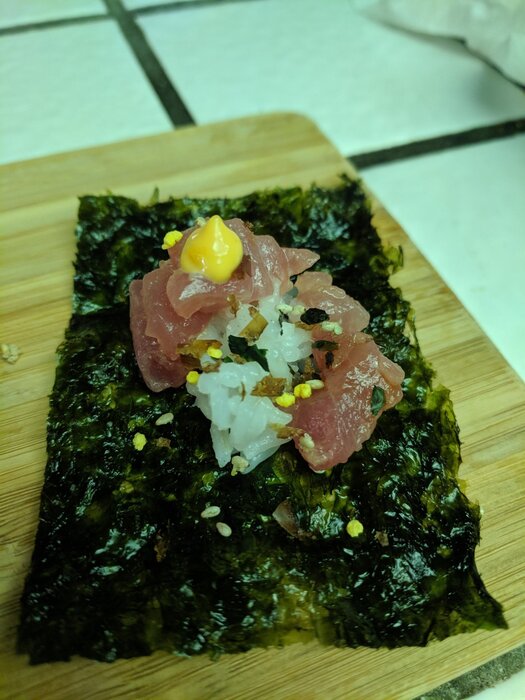 I've been recommended for a recommendation...

Thanks for the report.
Reactions: samhigh


samhigh said:
Sadly some people on the boat didn't catch any, and refused to get help from the deckhands. Can't understand why.
Click to expand...

Some people you just cant reach or teach, because they think they know everything. Can only lead a horse to water....

I've been fishing for over 50 years, and I learn something new on every trip!
Expand signature
Go ahead, make my day...

mhanson59hb said:
I've been fishing for over 50 years, and I learn something new on every trip!
Click to expand...

yep! gotta have an open mind, I learn as much from others as from teaching others.

this reminds me of an instance a few years ago where we were leaving the harbor for a full day trip mid fall and we have on board a whole bunch of tourists from like Monatana. (I dont know for certain but considering we were freezing our giblets off and these people were wearing tank tops and shorts with no apparent offense to the weather) midway out to the first buoy it begins to rain and blow, to the point that the rain is falling at over 45 degrees and we are going side to side, and we are still in the bay. everybody raced to the galley for shelter and this lone dude in a wheel chair is holding for (in my opinion) dear life at the stern. So me trying to be a good Samaritan race out to help this person in need getting banged around by the weather only to get an earful and almost my head chewed off by him. go figure. Cappy decides is not worth it and as soon as we clear the point we make a u turn and head back in for the barn. as we are un-boarding said dude in the chair sees me and proceeds to complete the chewing off session he began in the bay. I wish i could say I learned something about that incident but sadly I did not, to this date I'm still confused about how to approach people that apparently need help.
Reactions: ElLoboDelMar and samhigh

is that mustard on the fish?

mike82 said:
is that mustard on the fish?
Click to expand...

Nice tuna. Thanks for the report.
Reactions: samhigh

Sounds like fun....don't think I could do the 50 anglers part though.

It was rough at the start, but thinned as the day went on.
S

weather in the pic looks totally do able.

thanks for the report
Expand signature
-steve

samhigh said:
Sadly some people on the boat didn't catch any, and refused to get help from the deckhands. Can't understand why. The captain felt like we could have easily landed 200+ fish.
Click to expand...

Humm... Listen to the guys that are out there daily? That would be logical. Same thing with us 2 weeks ago. Pro Tip, listen to the crew.

New Seaforth gets it done for sure! Grew up fishing that boat and hit it thursday when i saw the reports they were going offshore. Great captain and great crew for sure, my captain was Brian when I went out last week i believe.

Great Capt and crew fish them religiously. They do get the bulk of the newbies, everyone wants to ride the San Diego. But 50 people on that boat is entirely doable. Don't let that keep you away. Plenty of room to fish that boat and RJ will be on deck the whole time helping out hook and hand, of course if they don't want the help. Go home empty.

Do they fillet the fish on these trips?

I'm with you 50 angles 50% greenhornes no way in hell. Thanks for the report ..
Expand signature

Hugo Bendo said:
Do they fillet the fish on these trips?
Click to expand...

Yes, $7 per fish for fillet, collar and belly. Very reasonable.

I was fishing on the Aztec, we took over the New Seaforth spot and pulled in another 45+ fish. Very cool to see these guys working together. We stay on that spot till 5 PM. I fished on the New Seaforth a week ago, that boat is huge, 50 people is definitely fishable.