My first BD trip report, I will try to give basics first then a few personal details/observations. Pics maybe tomorrow/just got back home a bit ago long drive. A bunch of us from (mostly) Oregon chartered the entire boat - Fun!

Believe we fished in the general vicinity of The Butterfly, roughly 60 miles from port. Several large boats in the same general area. First full day of fishing (Wednesday) produced a 10-hour drift yielding 33 BFT 30 to 90 pounds and 85 YFT 20 - 60 pounds. Fly lined bait on mostly 40# leader and size 4 Mutu hooks was the deal, sardines were healthy but mostly small. Some fish caught on bigger gear and healthy sized Mackerel. A couple nice (daytime) jig fish were landed larger fish up to about 90#.

Second day seemed like the whole fleet was stumped, Tuna were not to be found. We finally found some around 10:00, seemed like bigger models. Got the kite up, produced a 190# and an estimated 324# Super Cow (estimate based on length/weight and gutted/gilled weight). Ben landed the first kite fish in about 15 minutes Wow! Pete landed the Super Cow all on his own, it took a bit longer! Had a few other blow-ups on the kite that didn't stick. Added another 8 fish, good size, mostly on fly-lined bait and another 90 - 100# jig fish (day time) landed on 40# leader!

Total weight gutted/gilled fish turned in to 5-Star for processing was 4,793 pounds for 22 anglers

Personal observations (from a Rookie - stop here unless you have a sense of humor and enjoy reading about Rookie mistakes!). Turns out catching Oregon Albacore isn't really the best practice for catching your So Cal Bluefin!

The early morning bite the first day produced some very nice fish, unfortunately this Rookie went from free-spool to full drag way too quick. My first 2 fish felt amazing! but ended in zing-pows on Seaguar Premier 40#... I learned to s-l-o-w-l-y move the lever up, and not get to strike until well into the first run. The deck hand also thought my drag was set way too tight; set with a spring scale but I should have asked them to check it before I lost 2 really nice fish... Later in the day I lost another nice fish by pulling just a bit too hard when it stalled out just a foot from the gaff; pulled the hook. Ouch! Another lesson I already knew but just had to learn again.

What worked for me was remembering all the tips and how-to's gleaned from reading the BD Long Range and So Cal Offshore posts this past year. As soon as I popped those first couple Tuna I knew what I was doing wrong. My equipment, purchased after seeking advice here on BD, worked really well once I remembered that I really did know how to fish. I was careful about maintaining contact with my sardine while maintaining as little drag on the sardine as possible. In 2 days I was only caught up in 2 tangles during the day. My practice casting paid off, I was launching the small 'dines about 30 - 40' most casts. I really took the advice here to heart about choosing a hard to catch bait, hooking it up carefully (belly hook) and getting it in the water ASAP. If the 'dine didn't swim either really strong or start diving down quickly then I changed it out right away and started over. That first day I hooked 16 Tuna, broke off 3, pulled hook on 2, and boated 11 Tuna including 2 BFT and 9 YFT up to 55#. My most productive rig was my UC Tilefish Jr. with a Penn Torque 25nld2, 60# JB solid and a 15' topshot of 40# Seaguar Premier fluoro with the afore-mentioned Mutu #4 circle hook (no ring). My second rig also worked well, a UC Gusa 76 HP with a Penn Fathom 30/2 loaded with 60# braid and 15' of Seaguar Premier 50# fluoro.

My "Heavy", a UC Centaur with Mak 16 SEa and 100# JB solid with 80# Yo-Zuri fluoro, was a pleasure to fish both mackerel and heavy (night time) glow jigs with, unfortunately I never managed to hook up with this rig. Nobody on board caught a jig fish or a sinker rig fish at night. The wind was gusting both nights up to 15 knots, and it is possible the drift was just too fast for successful night fishing...

Adam was our captain, and I must say the Captain, Crew and Cook were Terrific! We all had a tremendously good time. It was a great pleasure to charter the whole boat, and fill it with fishing friends from Oregon (plus a few from CA and WYO). So much so, I think I will book the New Lo-An again tomorrow for the same time next year!
Last edited: Nov 16, 2019
Reactions: robaire, tunastryker25, historic and 20 others
Upvote 0

baller shit right there.
thanks for the report.
Reactions: 2Rotten
Upvote 0
P

I call BS without pics

Great report and bet you already booked the boat for next year !!
Glad you guys got into a good and memorable trip. Thanks for posting.
Upvote 0

Well done you are on your way to tunakiller. The advice you picked up on is good. 11/16 is respectable

Don't feel bad. In September on the long soak at Lupe. I got bit and went into full (accurate reel easily slid past strike into full). Pow
Upvote 0 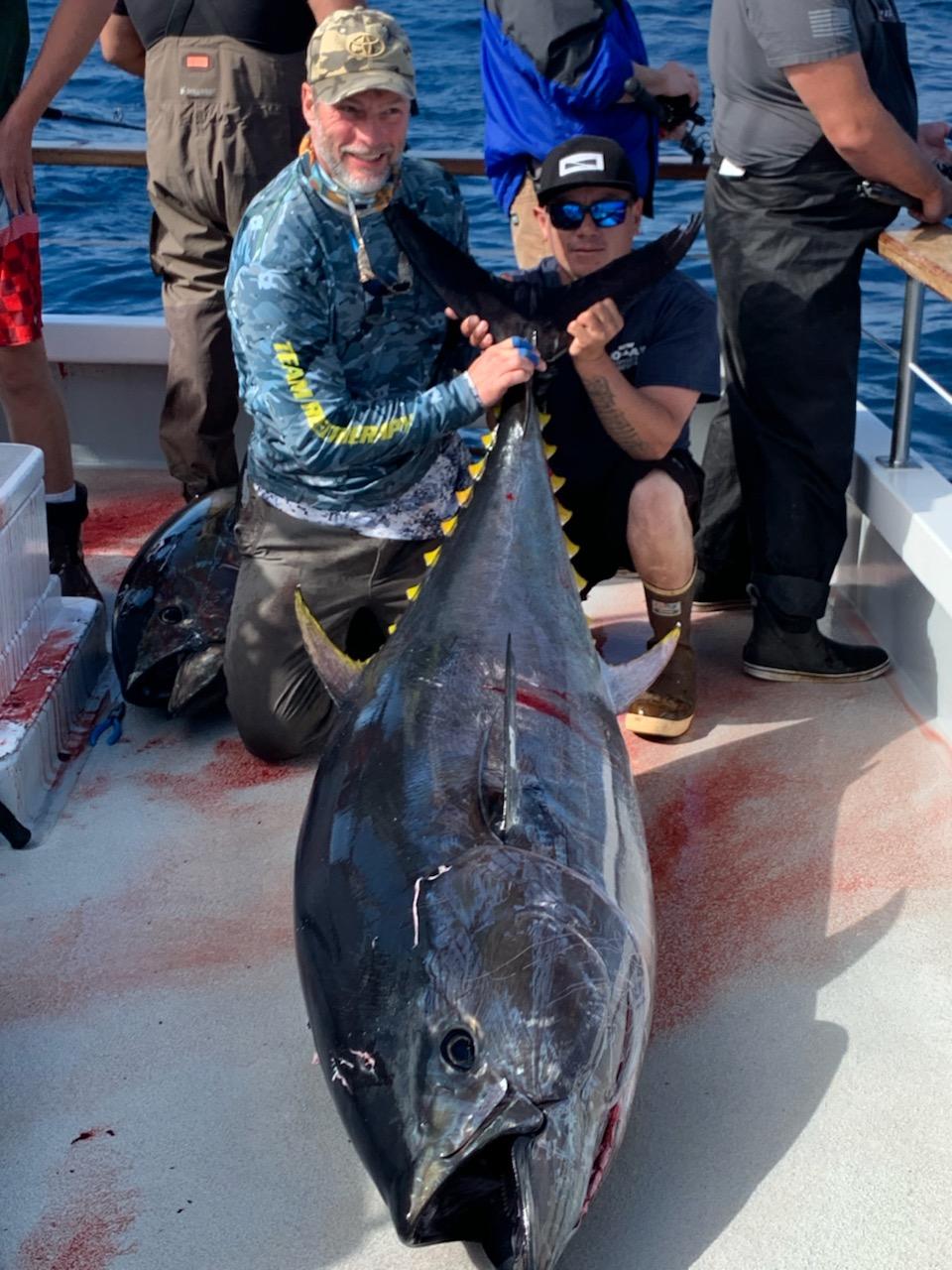 Is this the "Pic or it didn't happen" shot? Pete is 6'4" for reference.
Reactions: ripped, yakmandan, Tackleho619 and 3 others
Upvote 0 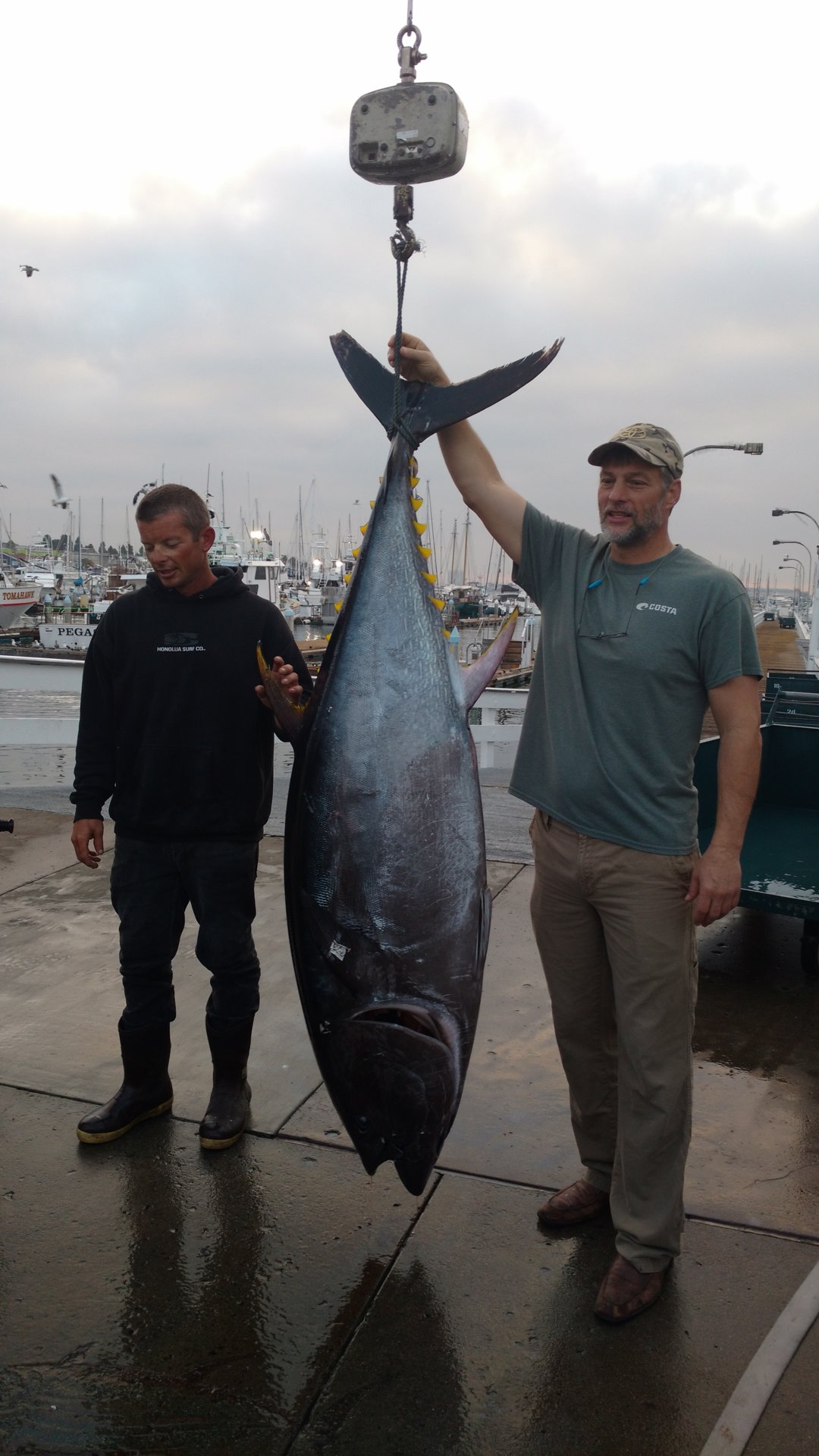 Captain Adam on the left, Pete on right. Adam is super cool and fun to fish with!
Last edited: Nov 16, 2019
Reactions: ripped, grahams98, Peg North and 1 other person
Upvote 0 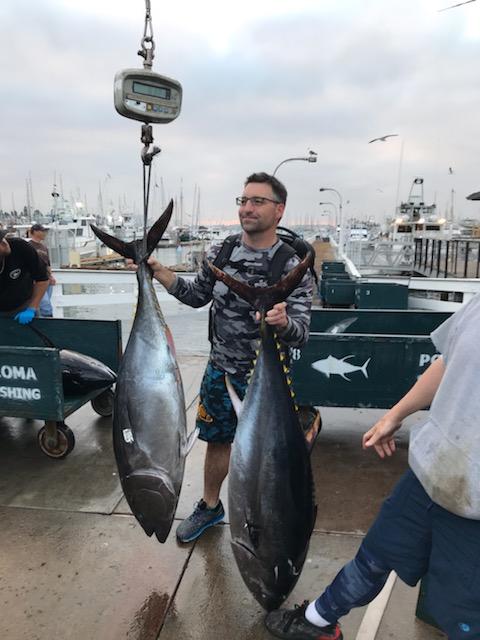 Aaron with 2 of his jig fish
Reactions: yakmandan, Peg North and effigy
Upvote 0 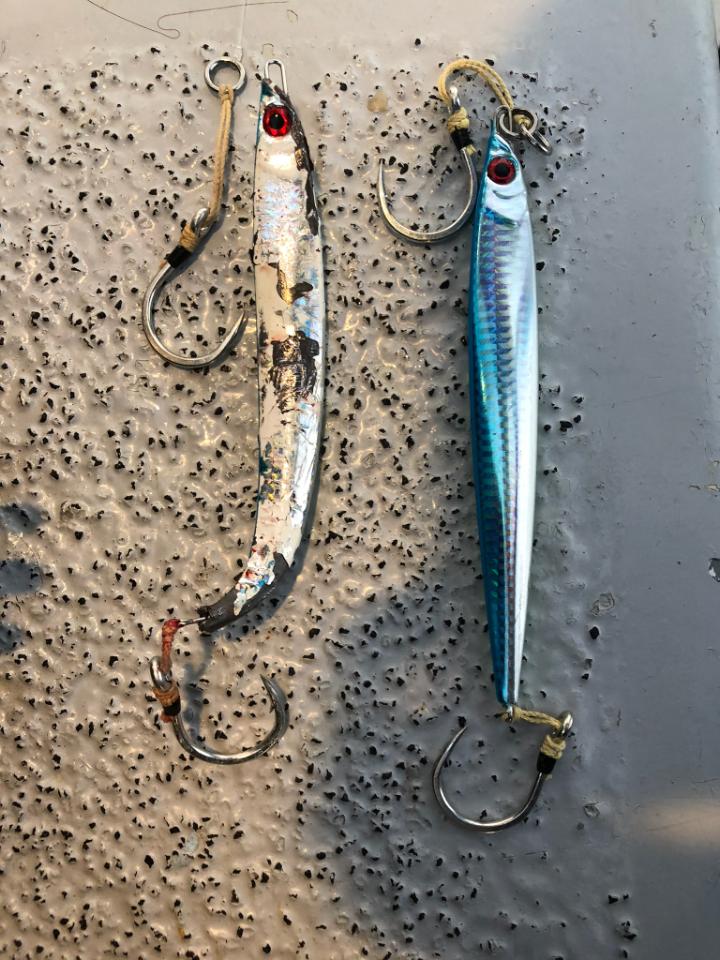 The jig is now relegated to the Trophy Case!
Reactions: ripped, yakmandan, SD Fish Guy and 7 others
Upvote 0 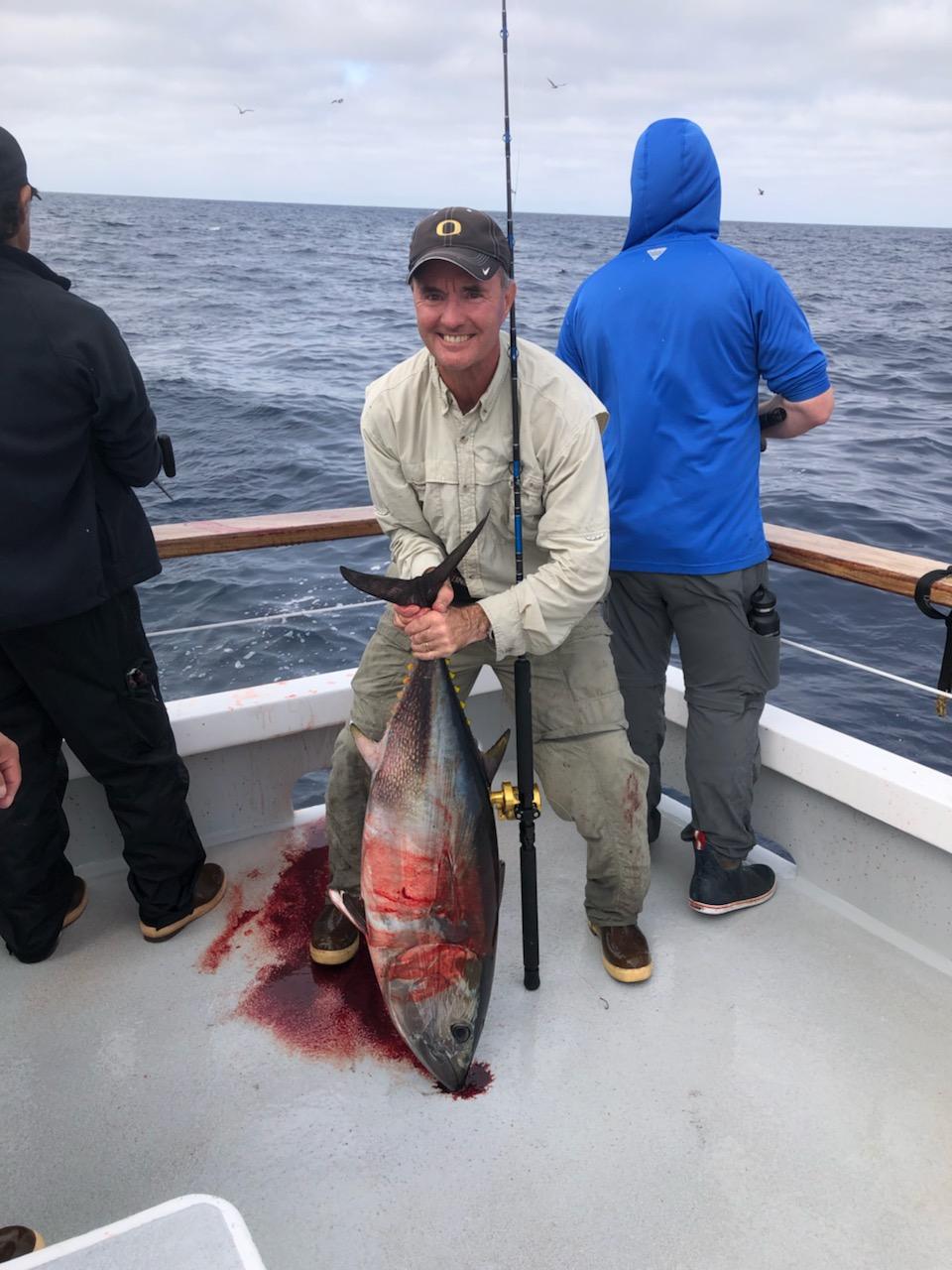 Great report Rod! So glad you all had a stellar trip. Look forward to hearing some stories.
Last edited: Nov 16, 2019
Reactions: locvetter
Upvote 0
A

Rod, thanks for having me along with such a great group!

I think it was huge having Alan Tani and Danny Tanaka aboard, SO helpful and generous with their advice!

You killed it and had a better plan than I did when I went back to fish my SoCal roots after being in the NW for many years. Let me know if you need a boat ho for albacore next season as I'm in Dexter and won't take my 19ft that far out (will split cost and help out on clean up).
Last edited: Nov 19, 2019
Reactions: locvetter and 2Rotten
Upvote 0

The jig is now relegated to the Trophy Case!
Click to expand...

Did you rig these? Are those Capt Jays, or Colt Snipers, or, .. do you remember?
Upvote 0

locvetter said:
Did you rig these? Are those Capt Jays, or Colt Snipers, or, .. do you remember?
Click to expand...

These are Aaron's jigs. They are Black Dog Eclipse jigs, 150 grams, Blue Chrome on one side, Glow on the other. Unfortunately Black Dog went out of business...

There was a nice Tuna caught on a Colt Sniper burned back to the boat.

Nothing at night, on any jig or on bait, not through lack of effort!
Upvote 0

Great write up as usual Rod! What a bad ass trip.

Loc : I rigged the eclipse jig with 9/0 VMC assist hooks and 250 lb western filament Kevlar cord. Figure 8 rings and hyperwire split rings (170 lb, but I’ll go up a size or two for next year). I always give the tail hook a slight offset. At least on our plentiful Oregon albacore, it improves the landing percentage.

PharmDoc said:
Loc : I rigged the eclipse jig with 9/0 VMC assist hooks and 250 lb western filament Kevlar cord. Figure 8 rings and hyperwire split rings (170 lb, but I’ll go up a size or two for next year). I always give the tail hook a slight offset. At least on our plentiful Oregon albacore, it improves the landing percentage.
Click to expand...

I love it - but, of course, the Black Dog Eclipse jigs, 150 grams, are not to be had on Amazon, Ebay, Tackle Direct, Fisherman's landing, the Longfin or the couple of other places I checked.

At 150g those things must cast like raiders or Wahoo bombs. What fun!

Weird that I am now absolutely convinced that they are a must have - pushing last year's Snipers aside. I wonder what possessed you to try them.

Way to go guys!
Toggle signature
Thanks for your report. Hook up! Cory
Upvote 0
Show hidden low quality content
You must log in or register to reply here.