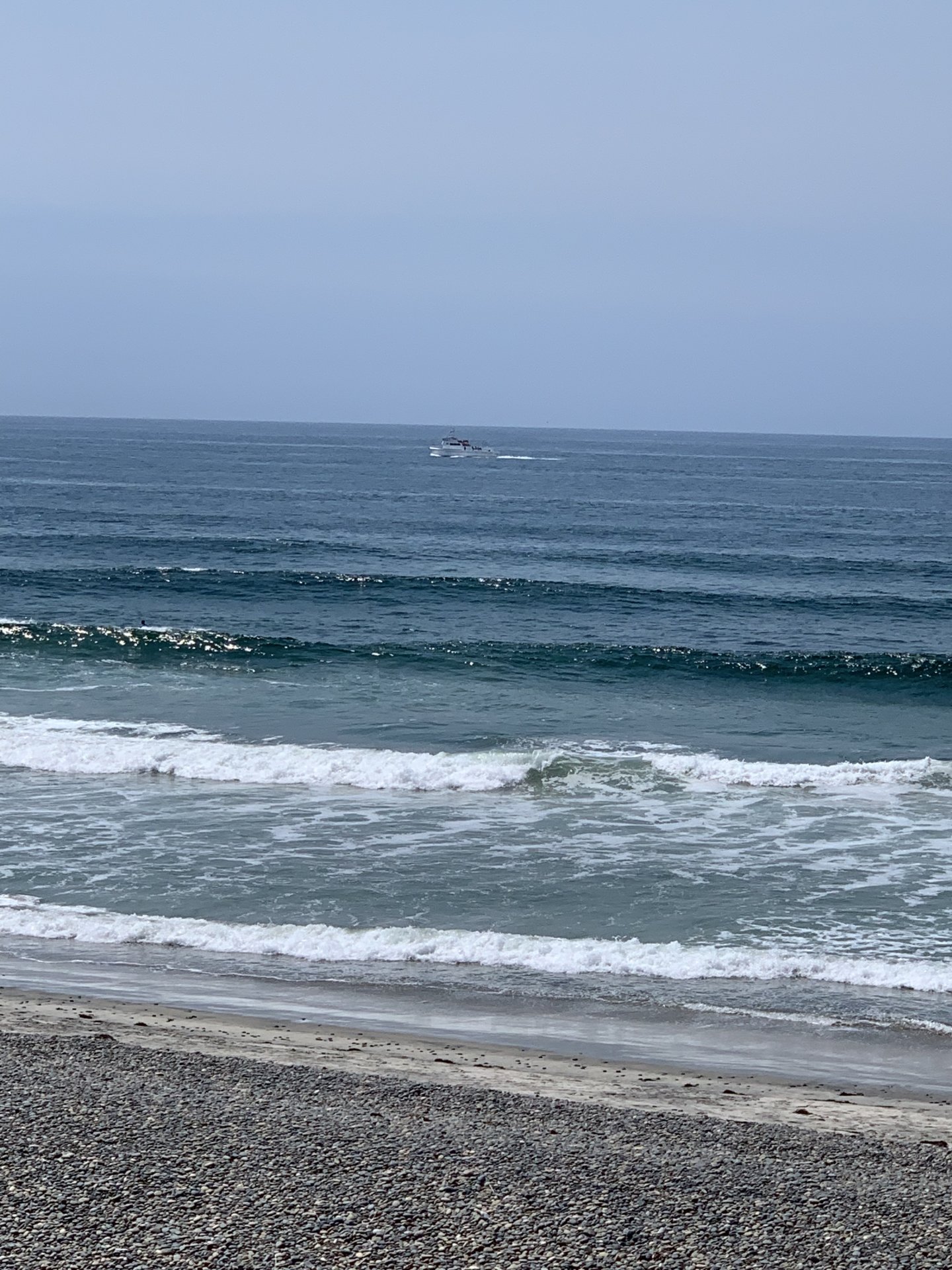 Was lucky enough to get on this charter (Thanks Scott Galletta CM) for the second year on the New Lo-An for Captain Adam’s Birthday. This was also my first trip since having my right hip replaced July 22nd. We left Thursday night (early too!) heading out to the Cortes Banks after picking up some mediocre bait. We had plenty of high hopes, as the Freedom had left them biting the day before, and bait, yo-yo irons, etc were all working. Weather was “beautiful” for the Outer Banks, so, stiff breeze, whitecaps, and at some points a tightrope walk for me up to the head on the way out.
Tyree (probably spelled wrong) started out the trip with an incredible breakfast plate, and in short order and after 1000 mg of Ibuprofen, it was out to the rail. I grabbed a Tranx 500 my wife gifted me during recovery, after a few casts, big yellowtail were hitting the deck, and wham, game on. Fish rocked me on a mint surface iron, I was impressed at both the pulling power of the yellowtail as well as the reel. After several minutes, fish popped off, I was a little miffed to be sure, hard to loose ‘em on iron.
The limited load (Outstanding group of Anglers) did reasonably well on the slob yellowtail, and since it was fishing, everyday was different, and when we left after an handful of hours, we didn’t drive away leaving them biting unless you mean the incidental sheepshead. I kept no fish from day one, giving away a bonito, and throwing back small white fish, rock cod, and bocaccio. ( another 1k of Ibuprofen at 2:00)
We hunted around for bluefin, and a brilliant call by Captain Adam had us heading in for a shot at better bait, this turned out to be a game changer.
The Rib Eye presented for dinner was phenomenal, such a key part of any trip is a good cook, and The New Lo-An has one. I have seen some shitty cooks, Tyree is NOT one of them. That meal, another Ibuprofen and my first beer in 11 weeks, I slept well.
Saturday Morning wake up, coffee, wished Adam a fantastic birthday . and out to the rail. (More meds, and apologized to an angler close to my rack, as I probably woke him up, throwing my gear around looking for my pills and additional meds) Boat was bit and bent hard on the first stop, new bait was a major upgrade, and Captain and crew were working hard to get every one bent. I grabbed my light gear, a Fathom25 2 Speed 30 lb test, on a Calstar 700M on a 2J hook, and away we go. Got bit, line singing like crazy, and I knew the fish was at least 20-25 pounds and this would be the first legit test since Surgery. Fought it, pulled on it, got it to deep color and off it popped, damn. As it got that close and it was straight up and down, I couldn’t get the rod leverage correct for my probably poor J hook set, as I have fished circle hook last few seasons.
Within a few more casts, back on again, felt heavy, got this one on the boat, got a peek at it, figured 25-30 lbs. Boat took advantage of that first stop and we had over 40 yellowfin on the boat, and off to look for more..
Throughout the day Adam repeatedly put us on the fish and kept us on the perimeter of the parking lot. I put on a few more fish, Adam handed me off one, and you just couldn’t ask for a better group to fish and enjoy a few beverages with. Next year, I will share the Vertical Half gallon Tequila shots with Wilbur, can’t do that now, as my liver has to be under pressure from my surgery meds. Had my second beer in 11 weeks for lunch, and checked my half pint bottle of Jaeger for defects.
Day progresses to the Sunset bite and Adam again, gave us all a wide open Yellowfin bite as a present. It was all that you could ask for, watching your buddies get bit, Tyree short gaffing fish, pure bedlam.
For some reason, I just couldn’t get bit at Sunset, tried everything, light line (probably should have dropped to 15, as 17 was getting bit every cast)
I was flabbergasted, slightly irritated, then, just took a few deep breaths, and decided just to enjoy the show, and that I did. We finished up with 182 yellowfin for Saturday, the majority at Sunset.
Well, started to break down my gear, then I hear Adam is taking u to the 302 for a shot at flat fall blue fin! Insane! We did make it there, nothing bit, but amazing effort by the Captain and crew. Cane, Louie, Gerald, and another I can’t remember plus both Captains, Incredible cook and great group of Anglers made this a perfect way to get back on the water.
Tight lines, oh, a far as pictures, my large YFT put me in a tie for jackpot, money to the crew, it looked and was a 28-32 model.
Reactions: KneppNasty, Blue Frontier, thefishcatcher and 7 others
Upvote 0

Great report. Watch the ibuprofen, if you take that much they need to do a kidney check on you after 4 weeks.

There is no need to go down to 15#, 30# is fine, you just need lively bait, short leaders, and tail or butt hook the bait.
Reactions: Ctony.clark
Upvote 0

I will be on a trip with them 10-22/25 2.75 day.... I really hope we get into the bft!!!but if we get yft wide open or steady pick of what you got. I would’ve happy as well.
Nice report and I agree with you regarding Tyree’s skill, some of the best cooking I have had on a boat by far!!!
Toggle signature
Maing
Reactions: Ctony.clark
Upvote 0

afraser said:
Great report. Watch the ibuprofen, if you take that much they need to do a kidney check on you after 4 weeks.

There is no need to go down to 15#, 30# is fine, you just need lively bait, short leaders, and tail or butt hook the bait.
Click to expand...

Good job getting out there Tony after a short 2 - 1/2 month recoup from hip replace. And pulling on nice fish. I'm getting a new hip in early 2020 . Good read , inspiring.
Reactions: Ctony.clark
Upvote 0
C

chachi10 said:
Cooks name is Kairi (Kyrie), not Tyree. He can definitely cook
Click to expand...

That’s what his name was!! I though I was saying wrong.Those chicken burgers are the bomb!
Toggle signature
Maing
Reactions: Ctony.clark
Upvote 0

chachi10 said:
Cooks name is Kairi (Kyrie), not Tyree. He can definitely cook
Click to expand...

tom donohue said:
Good job getting out there Tony after a short 2 - 1/2 month recoup from hip replace. And pulling on nice fish. I'm getting a new hip in early 2020 . Good read , inspiring.
Click to expand...

Thank you, at therapy now, minimal pain, working out the stiffness, I shopped for my Surgeon too, he has done over 10,000 of these. I also rode an exercise bike 8-10 miles a day for months leading up to the surgery, loose as much weight as you can, makes a bog difference. That part was harder for me. Also, it is a marathon, you have to, “ go get it” and it is NOT a linear recovery.
Best of Health
Upvote 0

That’s why I keep going on the nla.. Capt Adam his crew and Kyrie are awesome!!! You can see the Capt. wants to get fish as do most however I see real passion, not that burnt out fuck this attitude that some get after years of customer abuse.. I appreciated that effort night and day..
Toggle signature
Maing
Reactions: Ctony.clark
Upvote 0

Kyrie is the absolute best. He made the best carnitas burrito I’ve ever had in my life
Reactions: Ctony.clark
Upvote 0

soopaflyjm1 said:
Kyrie is the absolute best. He made the best carnitas burrito I’ve ever had in my life
Click to expand...

In that closet of a kitchen and 7-8’ swells he made the best chicken burger I have had.. the chicken ground and he formed it into patties and delivered with a masterpiece of a burger!!! I will eat that over a red robin gourmet burger or anything burger for that matter!!!
Toggle signature
Maing
Reactions: soopaflyjm1 and Ctony.clark
Upvote 0

Thanks for the report. New Lo-an is one of my favorite boats.
Reactions: Ctony.clark
Upvote 0

Boat
Whoever is Hot that week

I went to high school with Kyrie! He used to be on the Eclipse. Great cook and mellow dude. Former military too.
Toggle signature
... and I'm 6'5"
Reactions: Ctony.clark
Upvote 0
Show hidden low quality content
You must log in or register to reply here.