Boat
dont have one yet

Got to the landing around 7pm to get everyone checked in and grabbed food down at Jimmys since the boat was refueling and grabbing bait. We got off the dock at 830pm with some great bait and headed straight to the Cortez Bank. Captain told us that the fish were not really concentrated anywhere on the ocean and that there was some ok fishing on the anchor on the outer banks. The weather was ugly on the way out [email protected] seconds and windy the whole way so it made for a rough night of sleep.

Woke up around 6am and we were still about 2 hours out from the banks and the weather was still really lumpy and choppy and windy but almost everyone didnt get sea sick. Raul cooked us up some amazing eggs bacon and grits.

We dropped the hook around 830am and were told to use 30-40lb flouro and size 1-2/0 hooks. The Pacifica, Aztec and Ranger 85 were all right next to us. The morning started off with mixed bites of YT, BFT, and bonito. The seals really werent very bad at all. Lucky for us. But it was pretty slow. I had a long soak on a hot bait and finally got a nice 25lb YT. Was fishing a Shimano teramar PX 20-50 and Torium 16 w 30lb flouro and size 1 owner gorilla hook.

Around 12pm Captain Markus told us we were gonna move in between the banks where he heard some bites were coming on the kite. So on the way Raul made these monster skirt steak and bean burritos before the first swing on the yummy happened. I was watching at the same time that deckhand Ben who was tending the yummy rod when this monster whiffed it. I looked up at him and he looked down at me and said "that was a scary fish!" if only it had stuck.... the next 6 bites missed but it kept the energy good and then we finally got a biter.

My good buddy Richard who got a call from me with 24 hours notice to filll a last minute cancel drove down from the Bay area to make the trip. His kite number was up when the first one ate it. He put on a valiant effort on this mean ass fish then invited me in to take turns. Wow what a treat! 25 min later 3 hooks drop and on comes Mr. Cow (204 lbs) the boat erupted. 10 min later rinse and repeat yummy #2 gets eaten and big BFT #2 is on board (143 lbs). Then at the moment everyone figured it would just turn on it went quiet for 3 hours no bites.

Its now just about sunset and we are with the whole fleet looking around for meter marks. Captain Marcus cuts the engines and says grab your heavy gear and start dropping it down. Sinker rigs with 60-80lb and flat fall / knife jigs 250-500g were what all the fish were caught with. My buddies son Luke who is 10 years old was onboard and standing next to me while I was dropping my 80lb singer rig down to about 250ft. I got it down there looked over at him and said, hey take the rod, theres a great bait on here, if the line starts ripping off just put the lever up the the middle and crank hard! Well I turn away and start walking up to my heavy rod when I hear him yell from behind "Fresh Oneeeeeee!!" What a great sound. I got my camera out and took photos and video of most of the the fight, including the fish coming over the rail. He fought it like a pro and the captain, crew and all passengers aboard were going nuts over it. I didnt get a great look at it but I think it was around 25-35lbs. Im guessing about half his body weight. Stoked! My bother hangs a nice one on a 250g zebra glow flat fall, and puts it in the boat quickly, also around 25-35lbs.

Running up to the front of the boat for my rod now, I notice my old man off the bow and his rod is fully bent. I yell a little encouragement and then decide to get in on the action. Grabbed by rail rod my buddy Charlie built for me (its probably similar to the Seeker 2x4) paired with a talica 50 on 150lb braid. Tied on a 500g Mustad Rip Roller w the Mustad assist hooks 7/0 and crimped with 150lb yo-zuri flouro. Dropped it straght down 300-400ft and felt a really weird double bang on the line so I put it in gear and then the line just started screaming at 25lbs drag. I knew it was a good one and settled in on the bow. Now the boat had 4 of these going. We weaved up and down keeping tangles to a minimum, before I got deep color. Put it in second gear and winched up a 153lb BFT for my biggest jig fish ever. So stoked. All that money spent on jigs, hours spent rigging and prepping finally paid off. Next fish was landed on a williamson knife jig katy perry and that fish taped out at 130lbs. Now theres two left and the next one pops off at the braid to mono knot, total heartbreak. The last man standing was my old man and its at this point that I realized what was going on. As I stood there next to him Captain Marcus was saying enjoy it while it lasts... as I looked at his set up I see hes using a 1973 rock cod rod and has a 1970s vintage penn jigmaster spooled with 40lb mono. I immediately realized that the odds were very heavily in the tunas favor based on what we were all landing. Fast forward 45 min and the old man drags up his tuna tail first tail wrapped and its DEAD. Drama free gaff job and his BP 165lb BFT come onboard. Its going to take time to process all of it, but he got the fish of a lifetime on shithouse luck. The boat erupts again.

Marcus said were going back as we stayed 2 hours longer than scheduled. The ride back was silky smooth and everyone slept like babies. A trip for the ages. Of course it could have been more full speed but time with friends and family is priceless especially when so many personal bests were made on the trip. Seeing my old man put that fish on the boat will be one of my fondest memories! 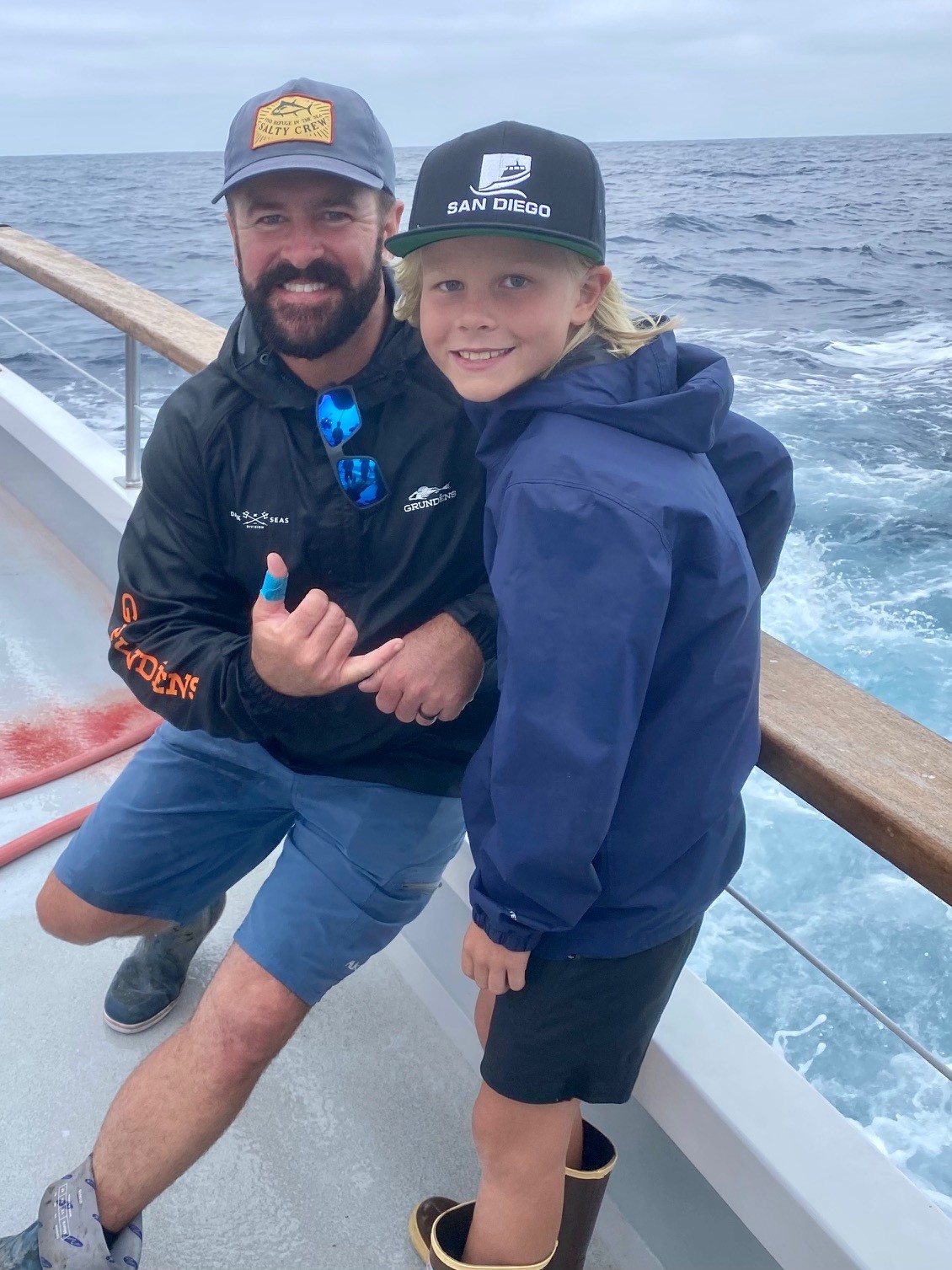 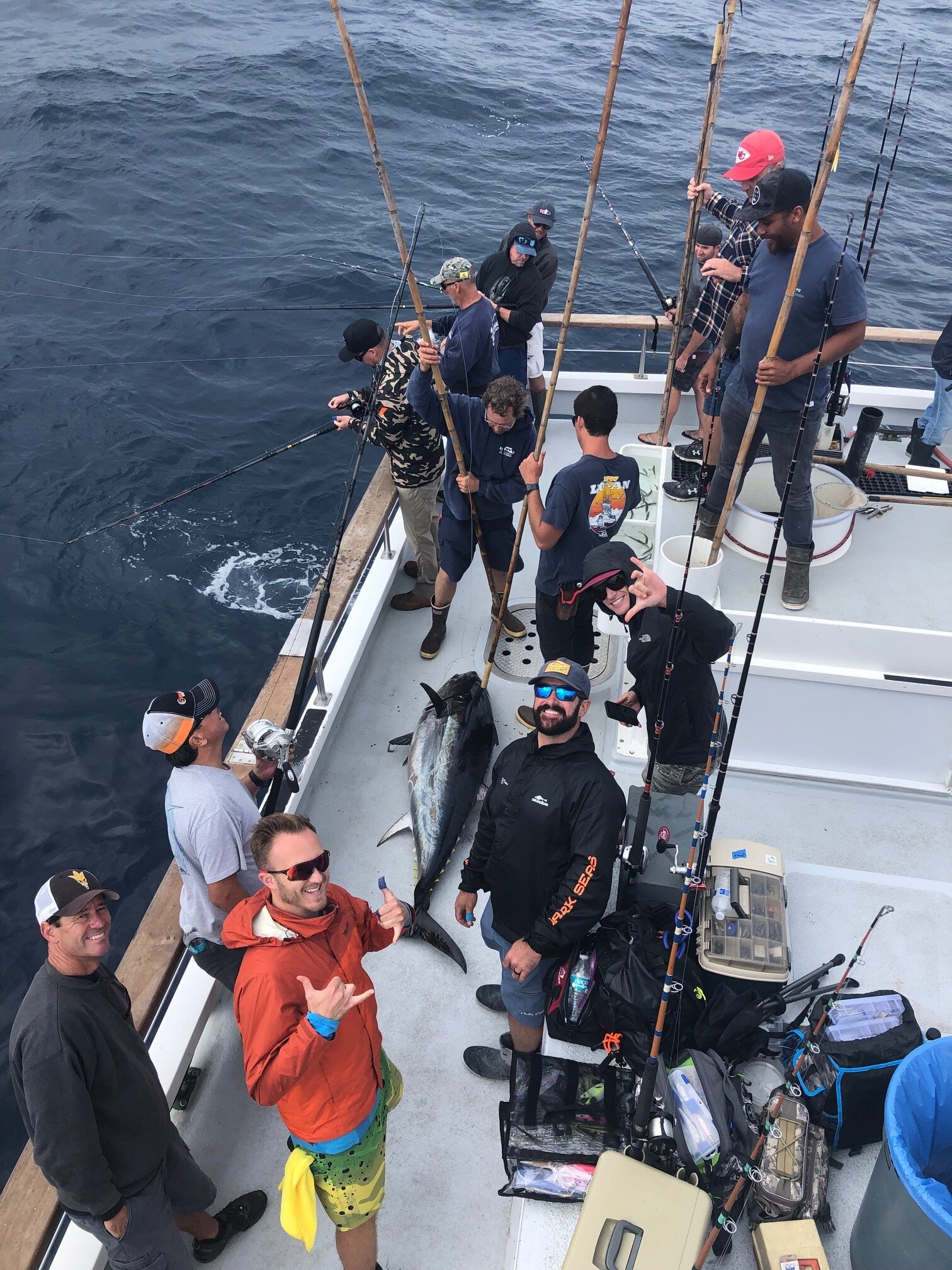 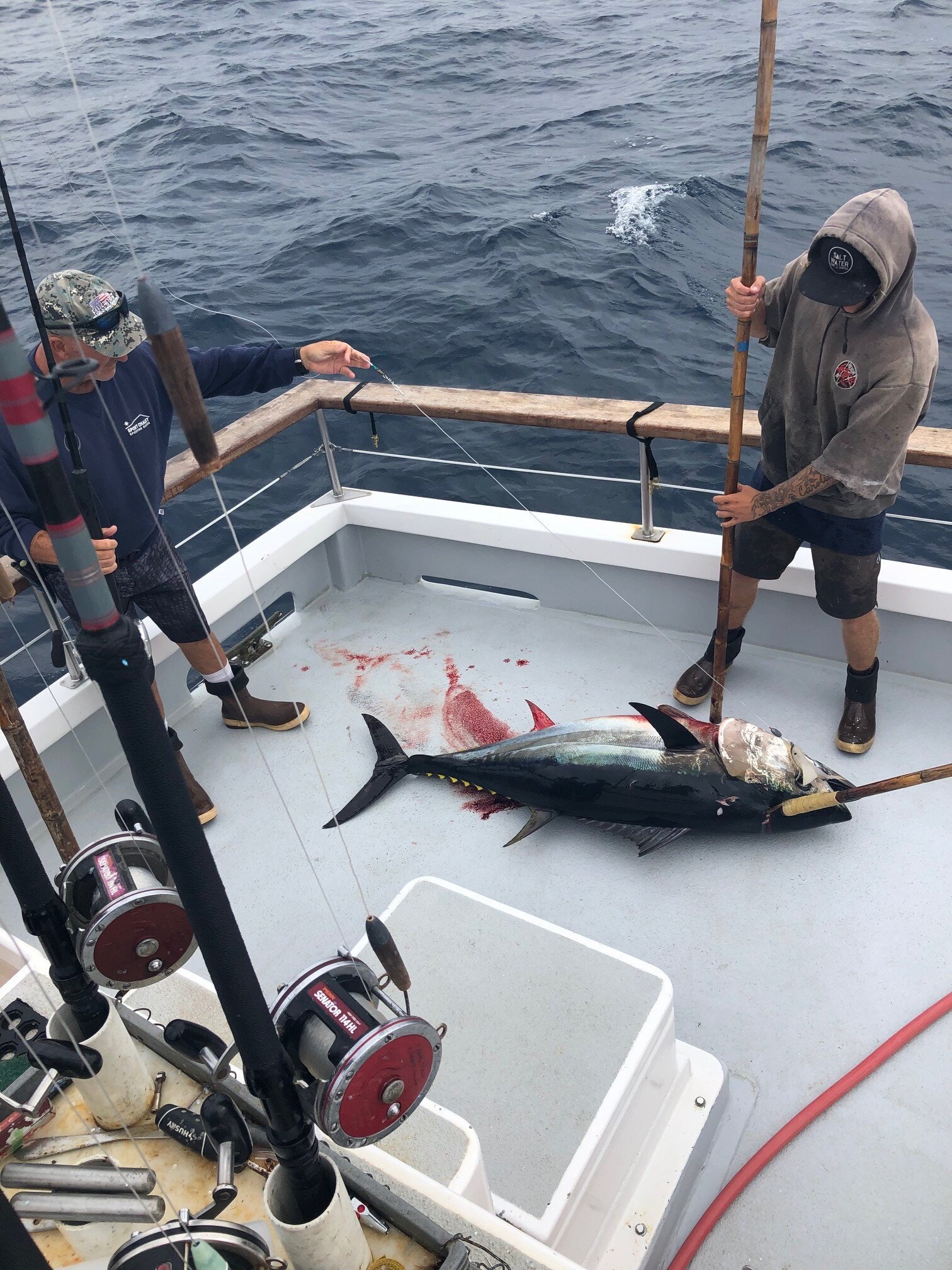 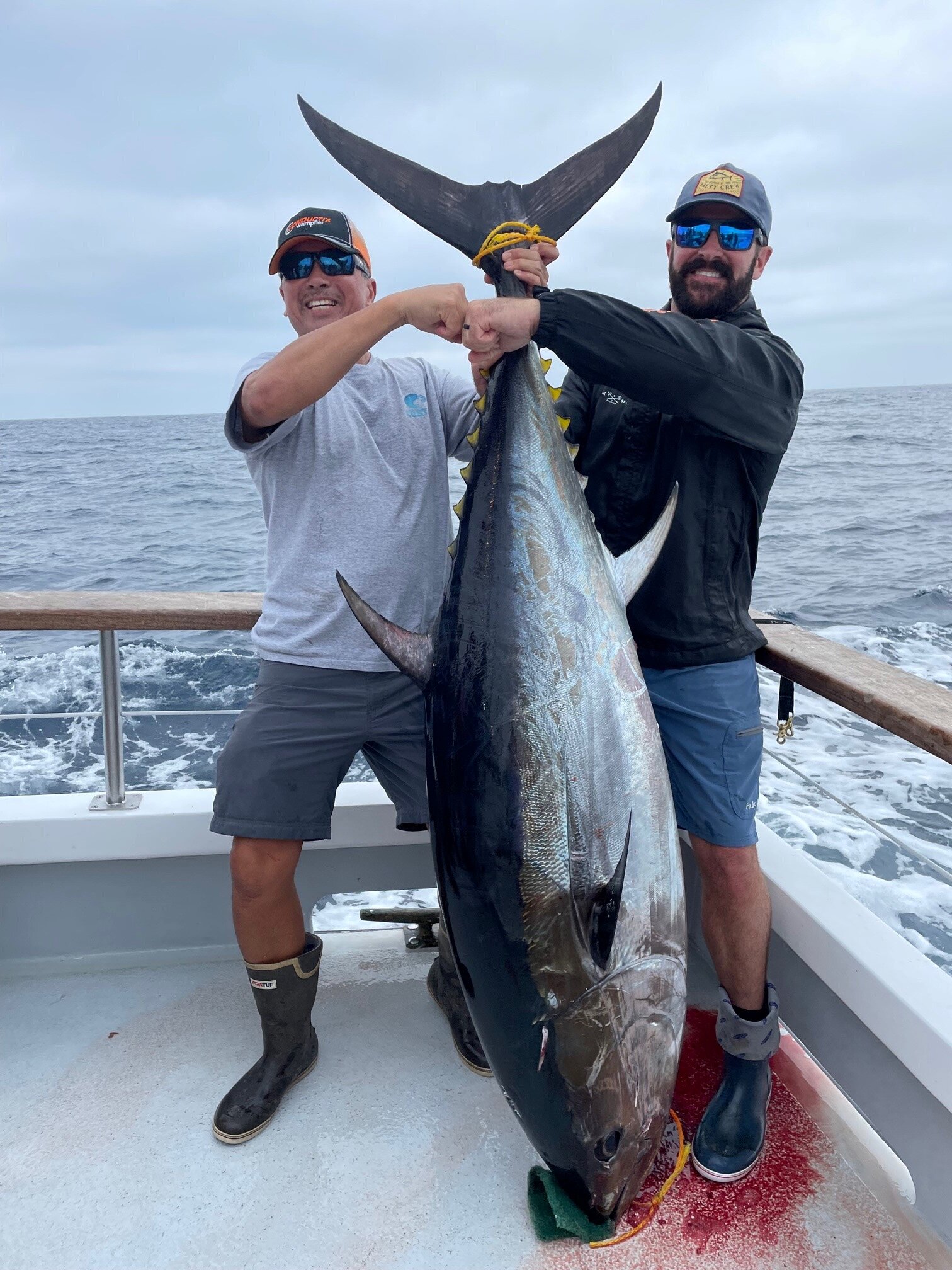 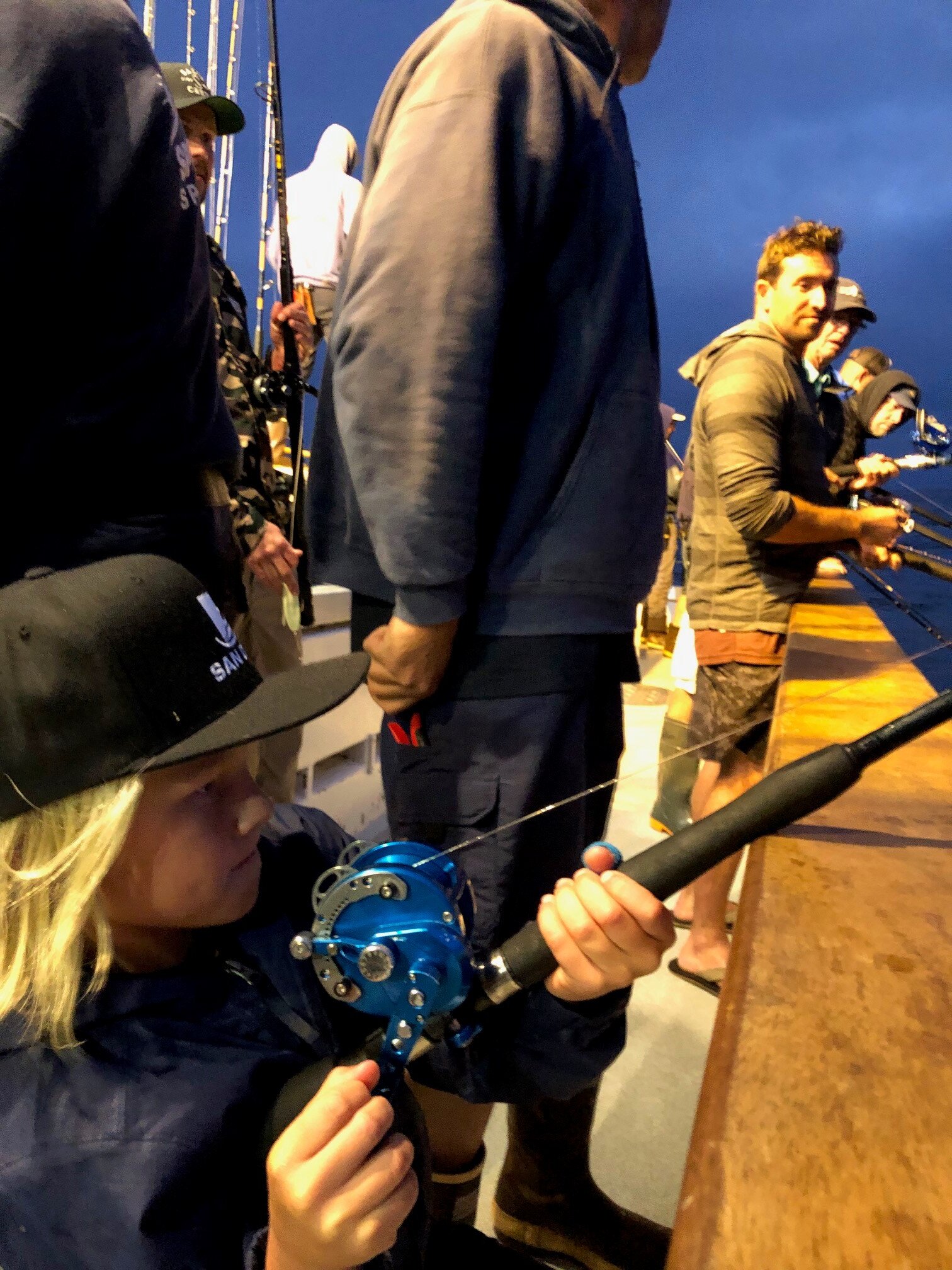 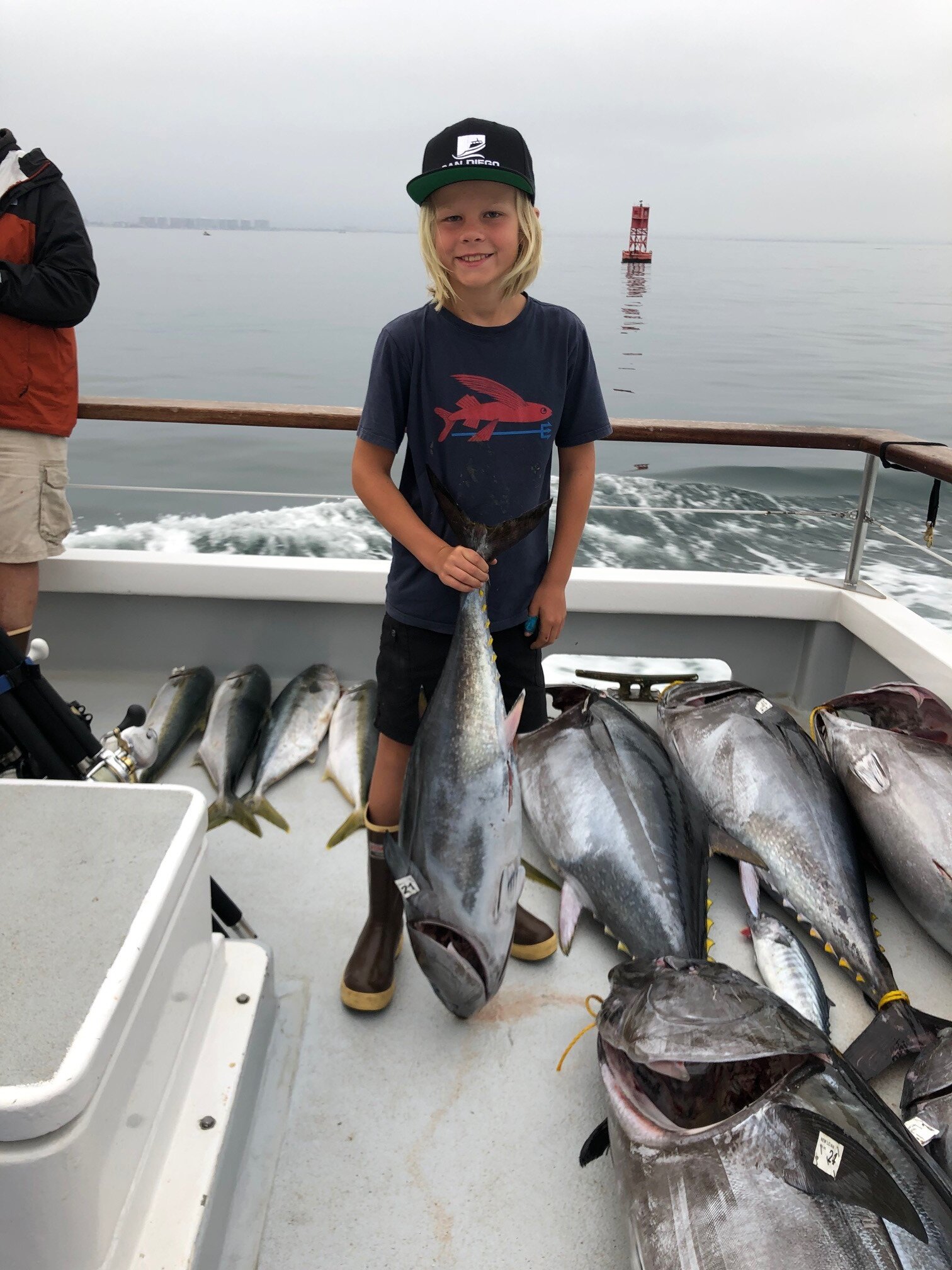 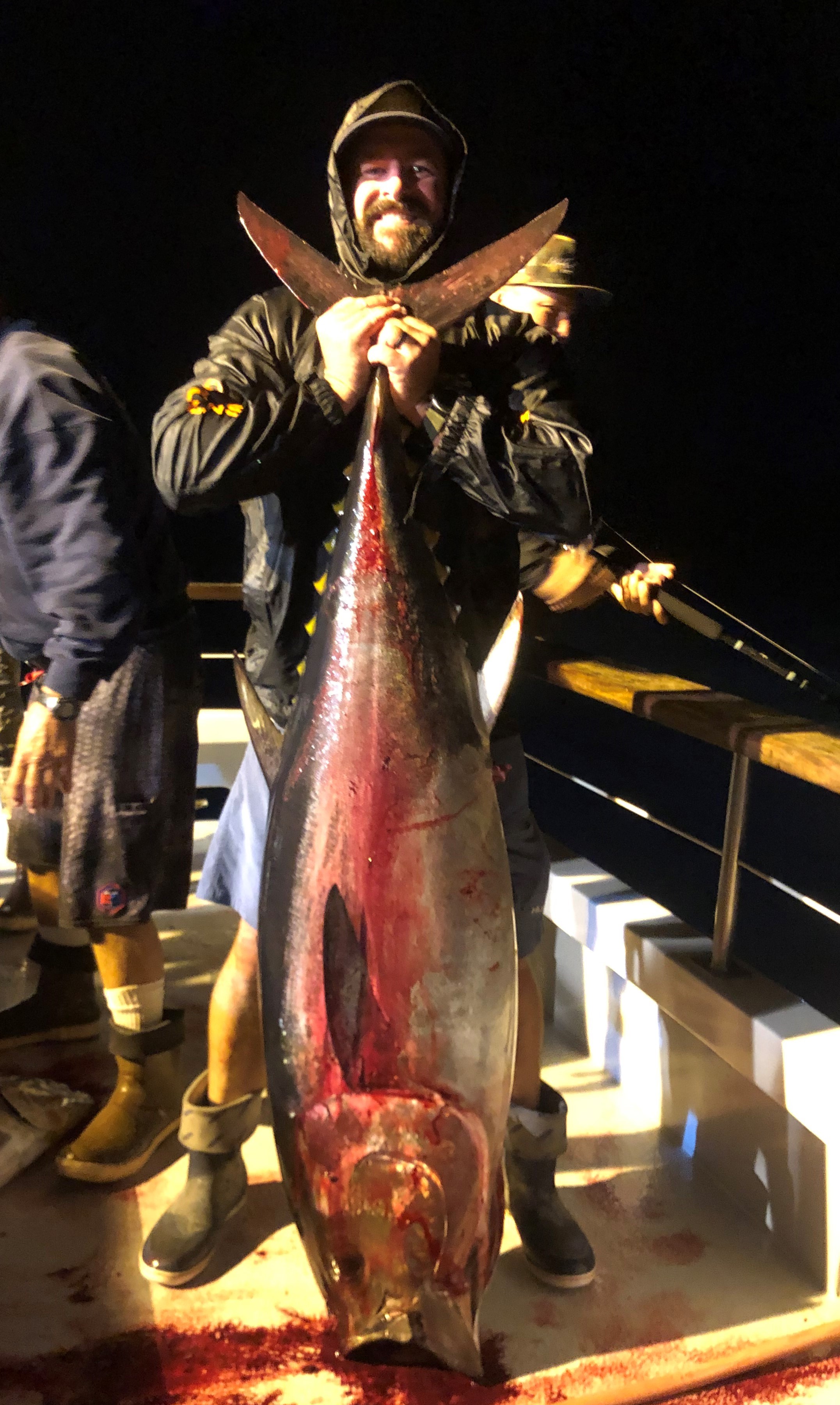 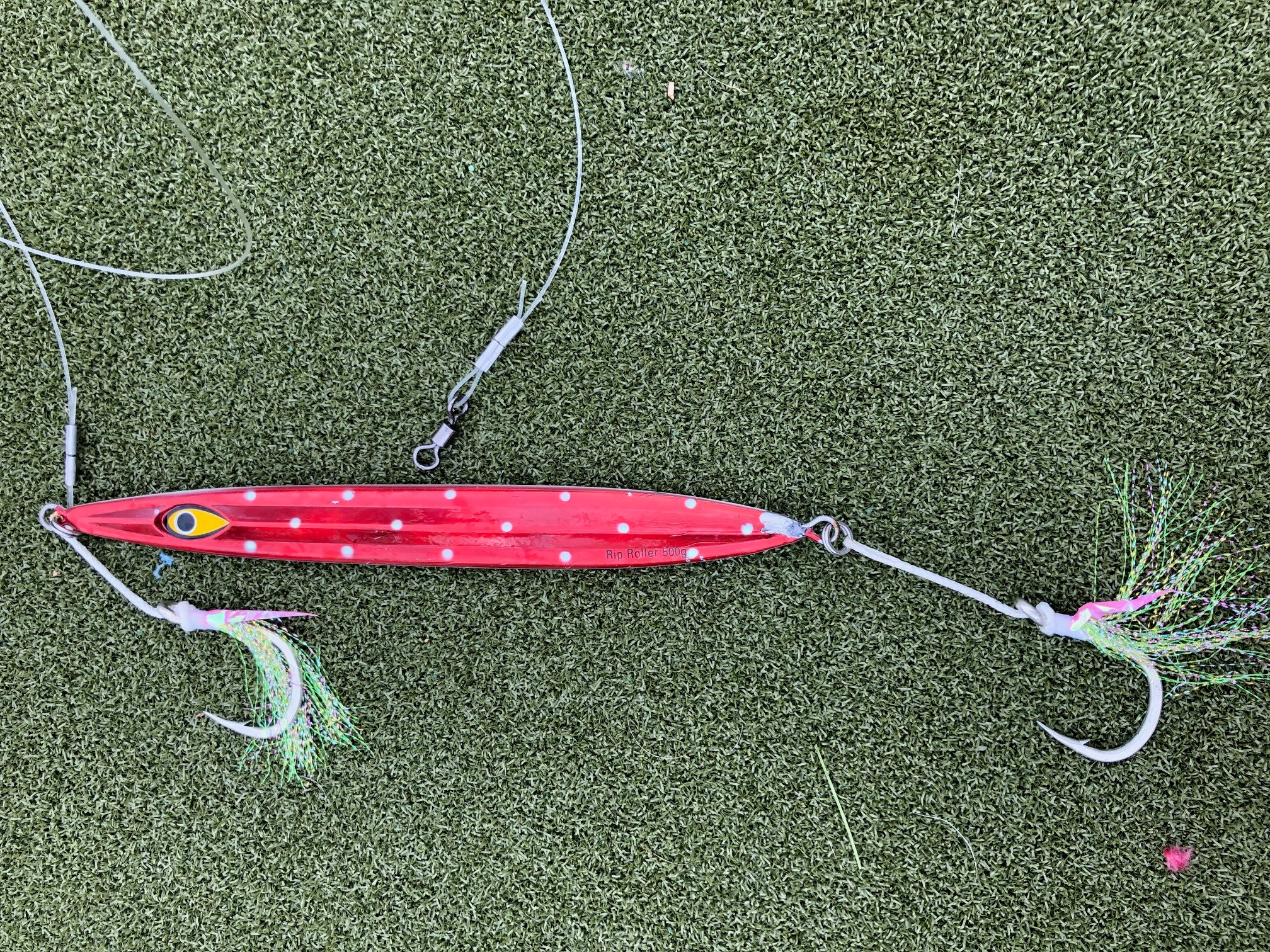 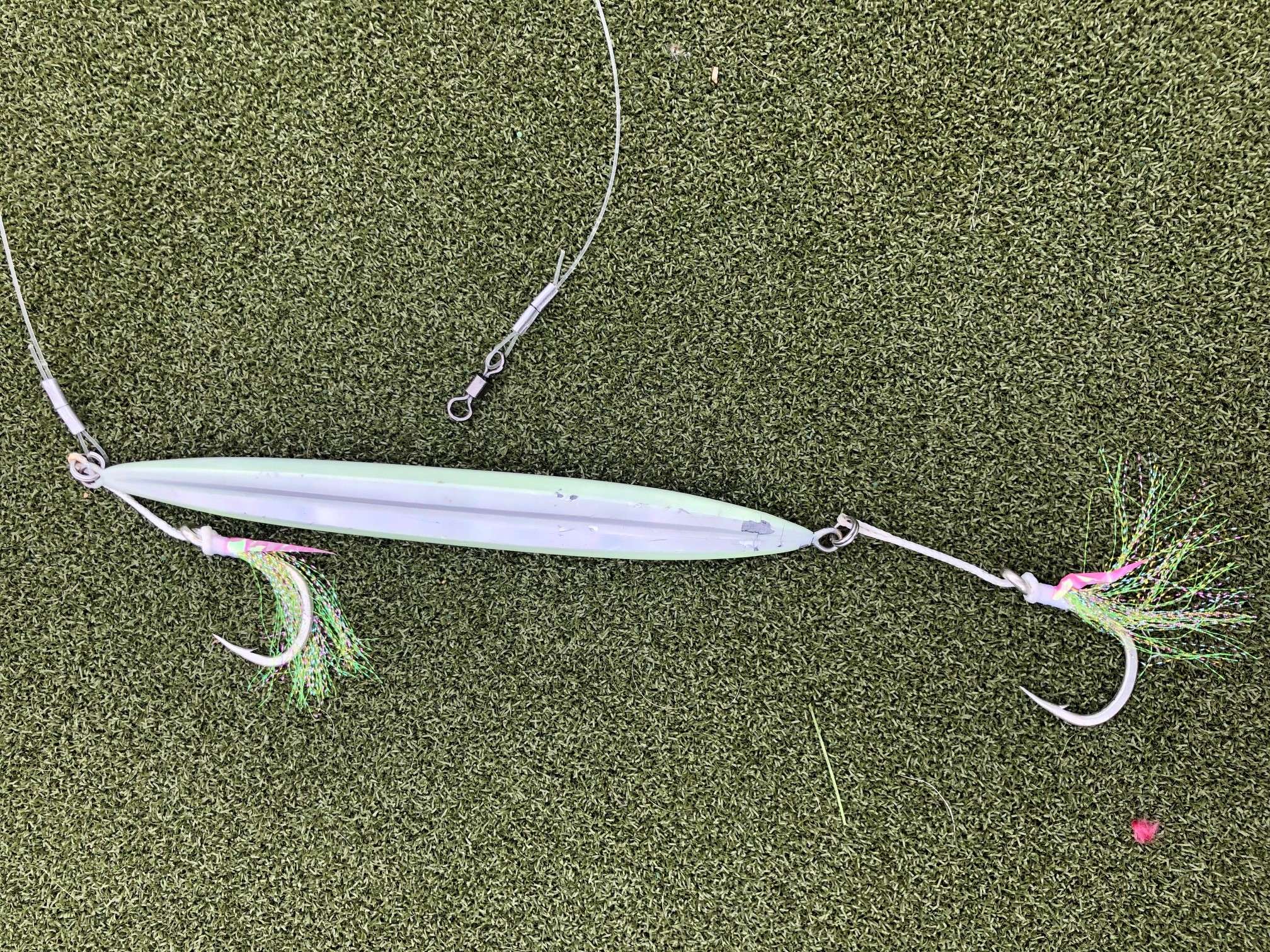 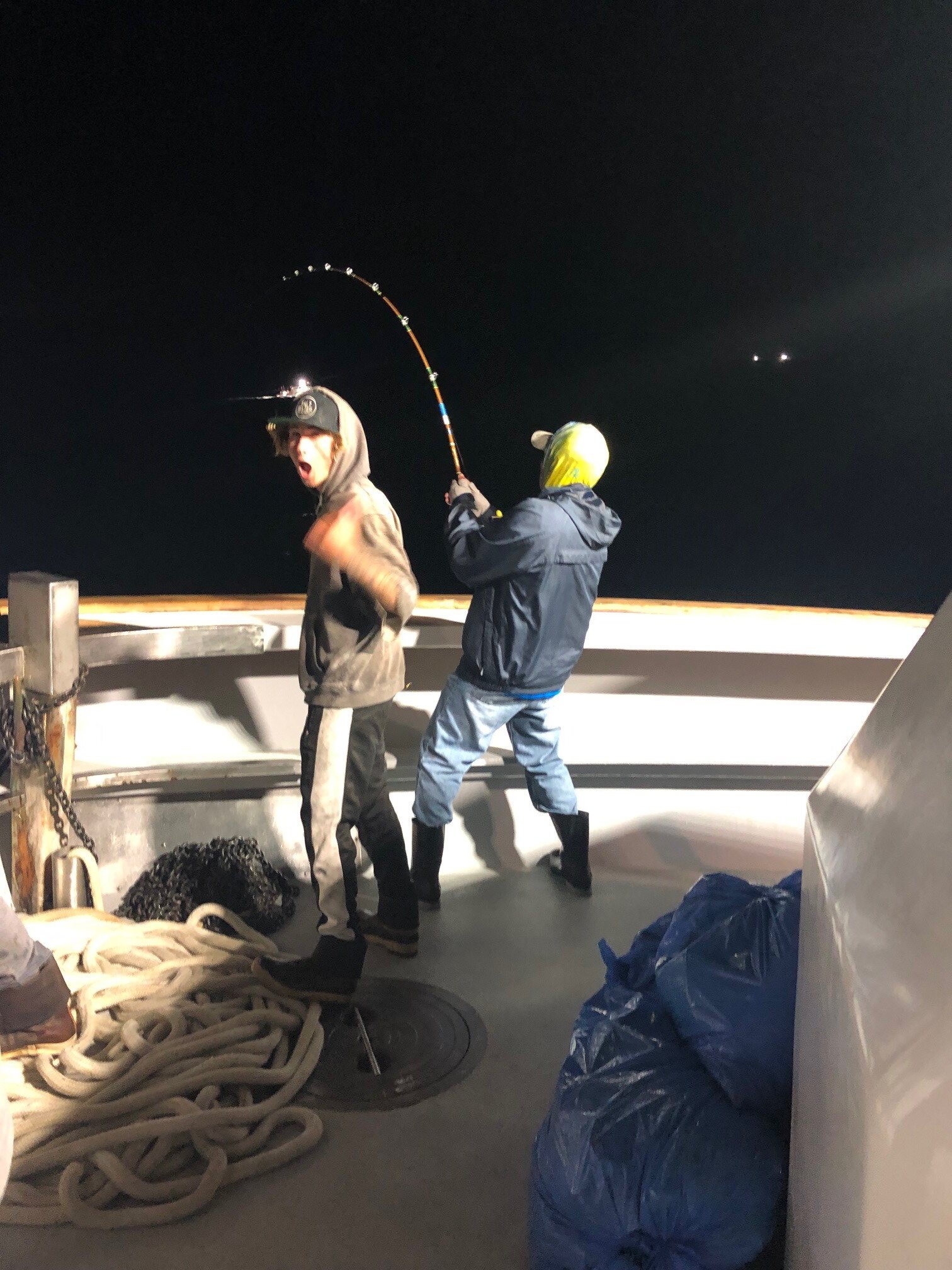 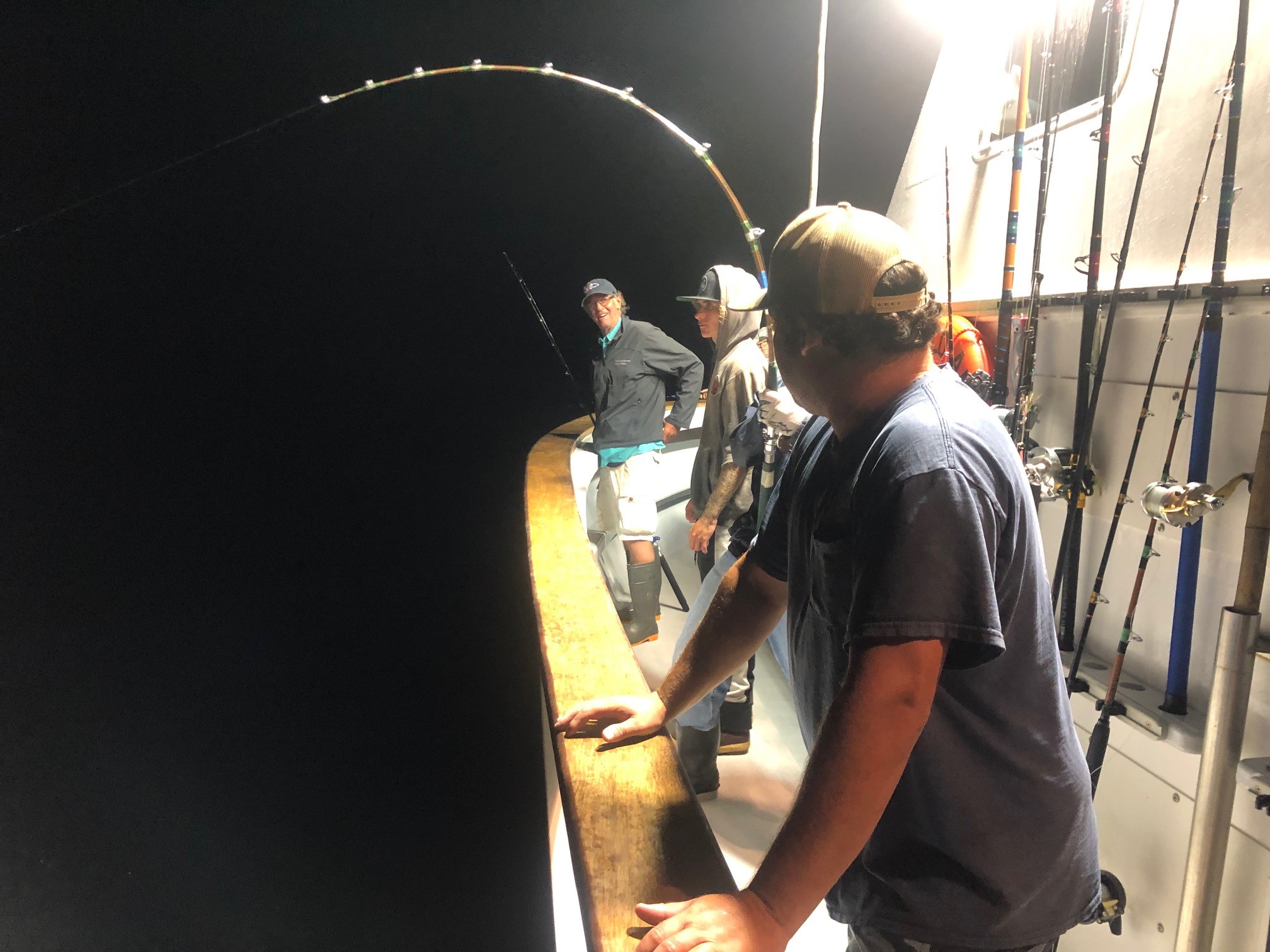 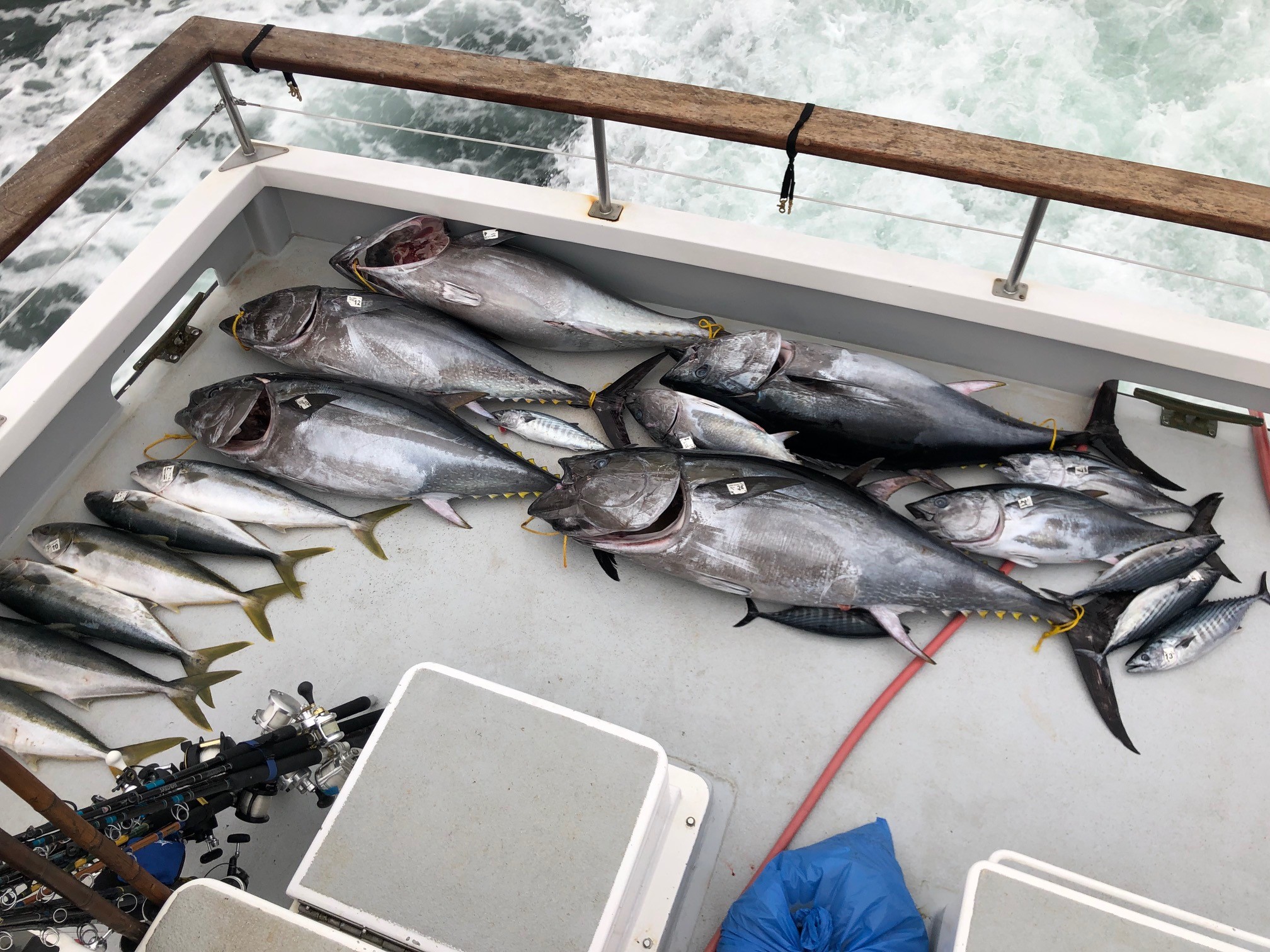 Fresh ONe!!!
Reactions: marlyn, katchfish, Peg North and 70 others
Upvote 4

Born to get down.

Family Crest - My Lure is True

A daydream about fish

Greatest report in awhile.
PENN JIGMASTER.
Was it straight mono on the reel?
If so, your dad is a great American Hero!!!!

First....HATS OFF FOR DAD!! I just started laughing.... and can see myself behind my dad.... on a JIGMASTER and the rock cod "broomstick" ...with a big tuna on... insisting "he's got it".... lol. AND YOUR DAD DID!! Maybe his proudest fishing moment ever... Thanks to you!

Well the fish GODS didn't ignore your plight either.... nice fish as well!! AND your buddies kite fish.... holy crap. Cashed ALL your KARMA chips at once did ya?

Thanks for the great post and the awesome picts. My Daddy use to always say..... "Magic happens when you least expect it". YOUR DADDY PROVED IT....and so did you! Be safe out there.
Last edited: Sep 2, 2021
Reactions: Rocket Dog, Tom123, Ahkhuang and 2 others
Upvote 1

Well the fish GODS didn't ignore your plight either.... nice fish as well!! AND your buddies kite fish.... holy crap. Cashed ALL your KARMA chips at once did ya?

Thanks for the great post and the awesome picts. My Daddy use to always say..... "Magic happens when you least expect it"
Click to expand...

YEP the kid looked stoked....he's got a bunch of back to school stories to tell on 1 trip.

The jigmaster did it 50 years ago and is still doing it today! Fuck ya! Dope ass report! thanks for sharing!
Toggle signature
Some times killing fish is like masturbations, you just don't talk about it. -AlbacoreShuffle

We were out there behind you guys on the OO. Once you guys left the bonito bite went pretty crazy. But the YT and BF were spotty the whole day. I kinda wish we moved now but the captain said no heavy gear and I think that’s why we stayed put.
Reactions: slatts and Ahkhuang
Upvote 0

Dang. I sold my 3 jigmasters a few months ago
Reactions: Rocket Dog, slatts, Abusaade and 1 other person
Upvote 0

Congrats! Can’t wait to use my rip rollers in October. Did you get them on a 500g?
Reactions: slatts and Ahkhuang
Upvote 0

On the old Penn!

FUUUUUUUUCK YEA!
That's so sweet!
God knows how much I love slaying on original gear!
Love it. Love every minute of it!
Great report!

Trip of a lifetime! Awesome job

Congrats on all the PB BFT. Thanks for the pics and report.
Toggle signature
-AH
I get skunked and I can not lie
Reactions: slatts
Upvote 0

Awesome trip with great results . Trouble is: can’t get on the New Loan these days
Reactions: slatts
Upvote 0

Yay! Big tunny on the 500! Lighter to fish with than a 113H, haha. Pretty phenomenal trip you scraped together all in all!

Thanks for taking the time to put that together - great to read - had a smile on my face the whole time - congrats
Reactions: slatts and woodfish330
Upvote 0

Hell of a trip with everlasting memories! Love the overhead shot of the fish, giving perspective to just how large some of those fish are.
Reactions: slatts
Upvote 0
I