I've tried 'everything' (read all the how to guides, searched the forum, called bait tank shops, etc) and hoping to get some guidance from the BD Community on this thread as a last resort.

The problem:
As soon as the bait goes into the tank, they bunch up in a corner as pictured below and start a slowly dying (pic 1). They seem to be 'gasping' for air from the get go and start darting sporadically. If they are not bunched up in the corner, they swim in random directions bumping into each other which accelerates their death (pic 2/3).

Things I've tried:
1. Timed a 7 minute fill and bait died quick.
2. Adjusted outflow so that the tank is always full (no sloshing) and timed an 11 minute fill, the bait was noticeably happier but still struggling.
3. Loaded a tiny amount of bait to see if over crowding is an issue, they tend to survive but still struggle and don't swim in a circle. Noticeably weaker over the course of the day..

What is the best way to troubleshoot this issue? 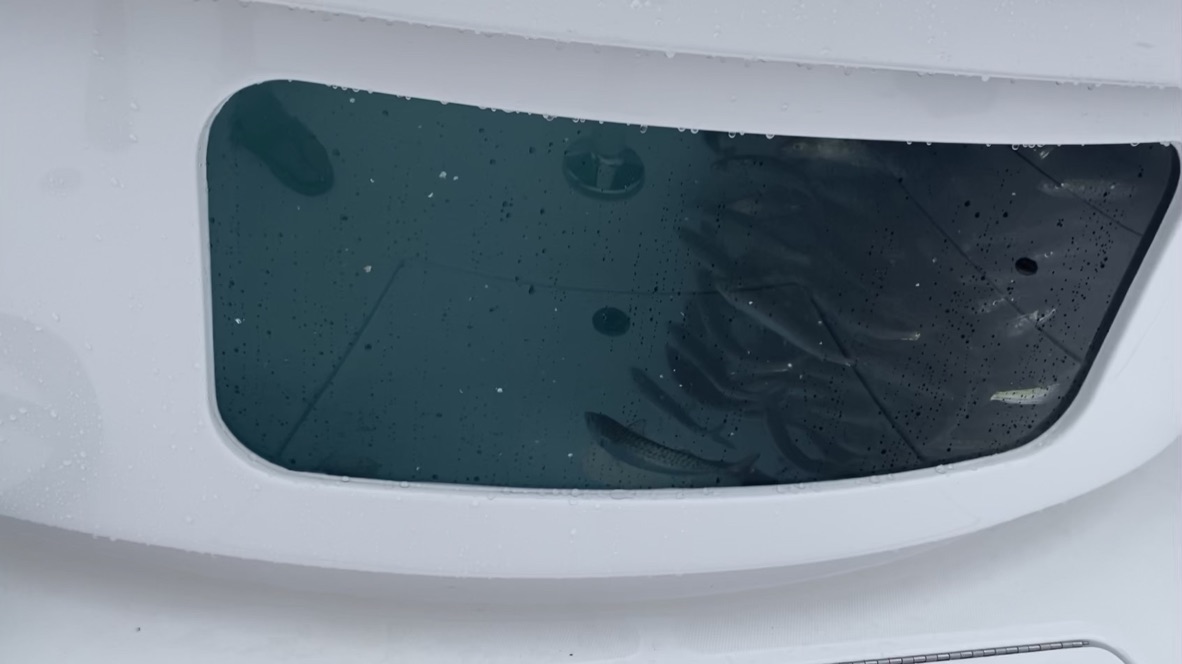 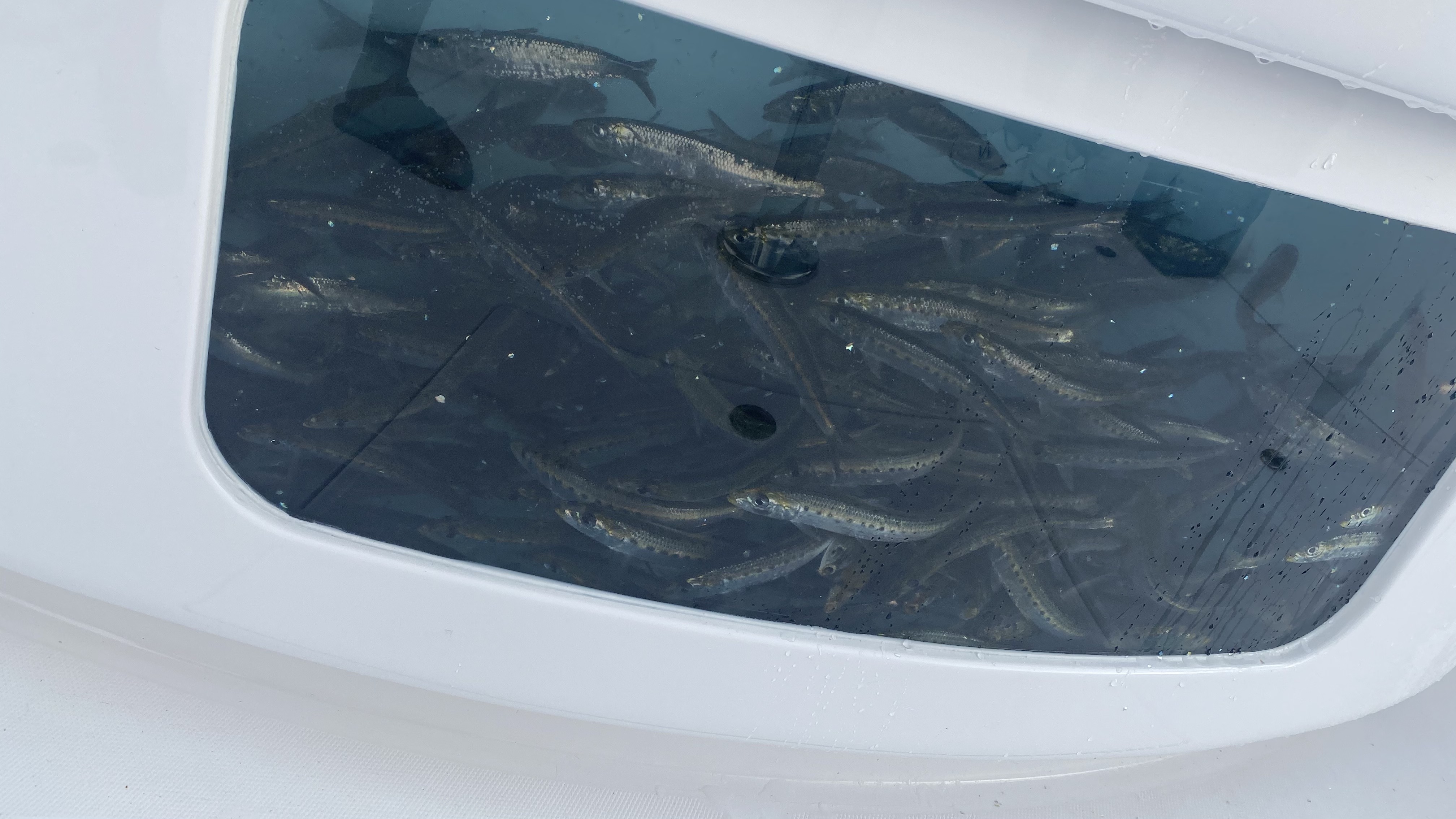 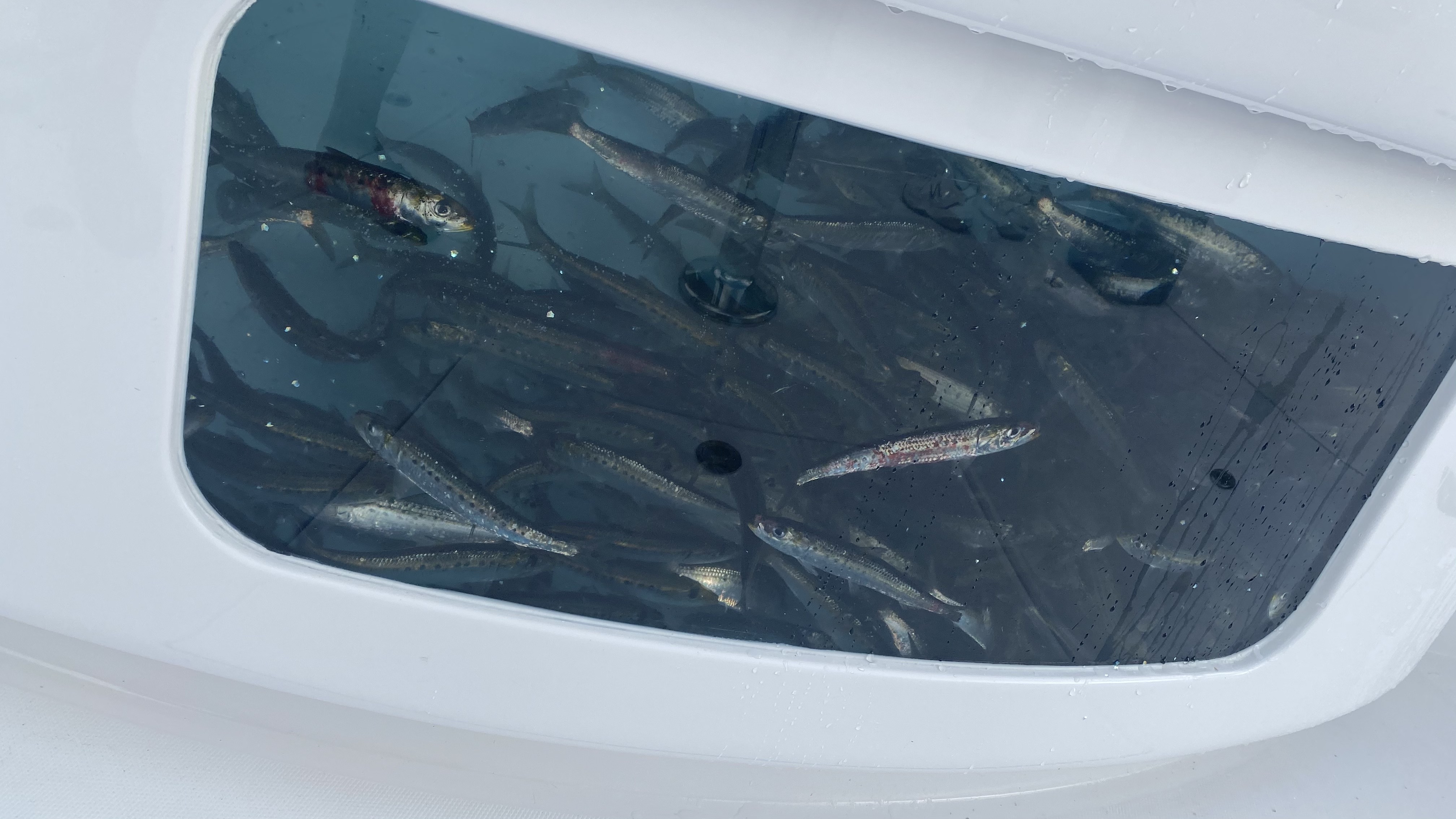 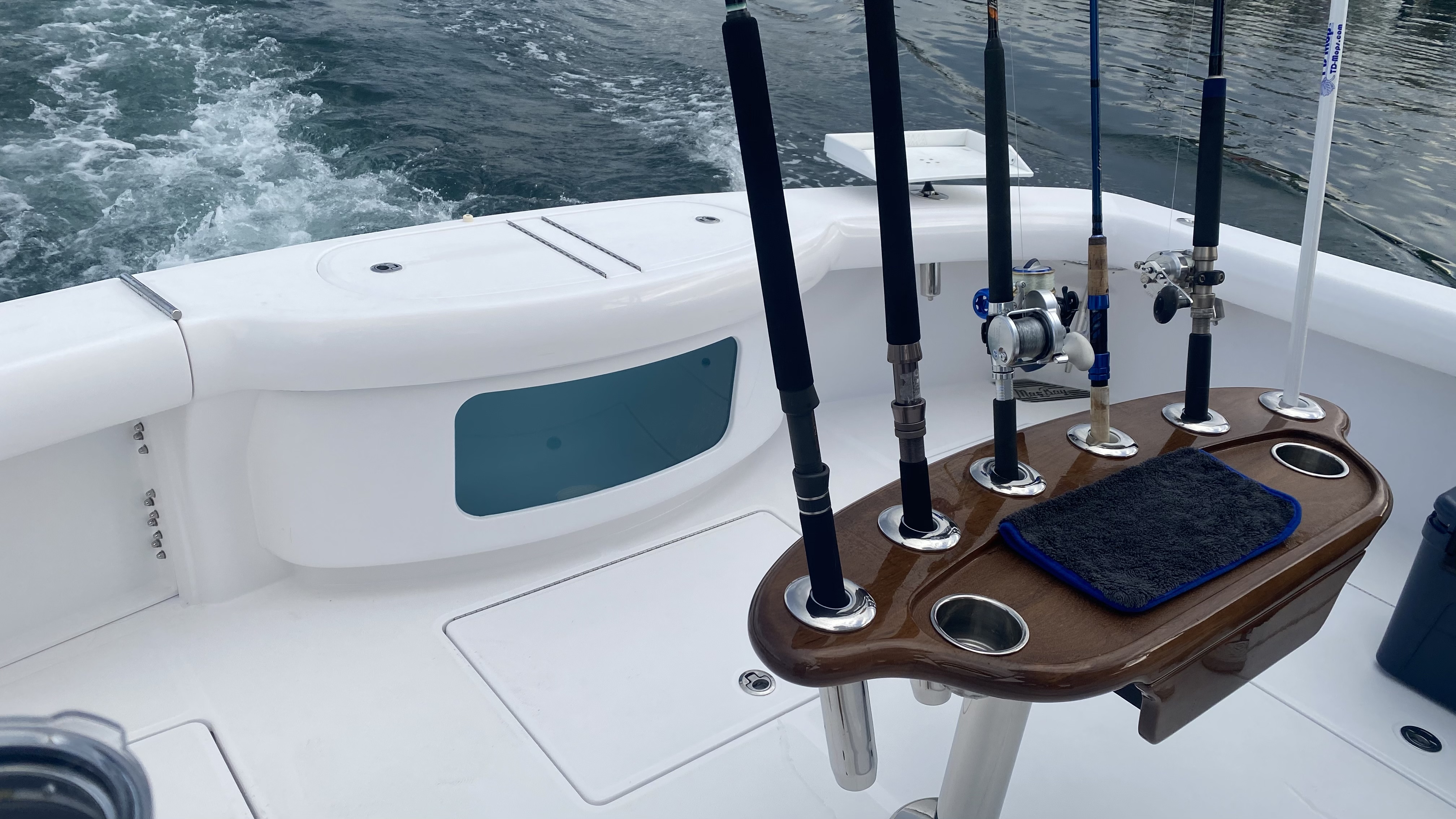 Some pictures shot from the top of your tank and pictures of inside your tank would help in the diagnosis. What shape is your tank, where are the water inlet nozzle and outlet drain placed?

Have you tried the owners forum for Magbay to find if others with same boat may have or have had a similar issue?
Reactions: RicGao, Blackfish and Taco Maker
Upvote 0

Is it a square or rectangle tank with corners? They should swim in a circle against the current of the water flowing into the tank. Need a round or oval tank or you’re kinda screwed.
Reactions: SkipJack Boats and Taco Maker
Upvote 0

Typically from my experience if bait is darting around sporadically as you describe it is because of a bad fill pipe orientation.

Make sure when your bait tank is filling you are creating a current for your bait to swim against. (create a small/low pressure cyclone) This is achieved by having the holes on the fill pipe run parallel to whatever wall it is up against. This will give the bait something to swim into/against and hold them in a relatively stable position within the tank.

(I also agree with what Tom said above, that bait looks like it is pretty beat up to begin with)
Toggle signature

clevel said:
Some pictures shot from the top of your tank and pictures of inside your tank would help in the diagnosis. What shape is your tank, where are the water inlet nozzle and outlet drain placed?

Have you tried the owners forum for Magbay to find if others with same boat may have or have had a similar issue?
Click to expand...

There are 2 outlet overflow drains on the top (both sides), and a main drain in the bottom center.
Last edited: Jun 1, 2021
Upvote 0

Brand new tank, beautiful btw, maybe it has some residue inside. I wouldn't recommend cleaning the inside of a tank but maybe check it out when it's empty and see if it smells like it's got any chemicals left on it or if it feels different to the touch in some areas like there is something left on it from manufacturer.
Upvote 0

There are 2 outlet overflow drains on the top (both sides), and a main drain in the bottom center.
Click to expand...

The drain is not your problem . You need to look at your inflow .
Toggle signature
Better to do battle and lose than not to do battle at all
Reactions: onehottip
Upvote 0

Try covering that big window and see if the bait settles in better.
Reactions: oceanjake and Reel hip
Upvote 0

Three thoughts:
1) Baits don't actually like windows. They get scared when they see movement on the other side. Probably looks like a seal coming. That can cause the behavior you show, in one picture but not the other, of the bait huddling in the corner. Put a towel over the windows, at least until the baits settle down.
2) The best way to adjust the flow is with an oxygen sensor, which will cost you a few hundred bucks, but well worth the investment considering all the other costs of getting live bait to the grounds. Flow is necessary to allow adequate oxygen replenishment, but excess flow is bad for the bait. I find that when the bait is first introduced, they consume oxygen at a much higher rate and need a correspondingly higher flow rate, but once they settle down, you can choke back the flow quite a bit. I also find that there is much less oxygen in the water at night (so higher flows are required), probably because of the lack of plankton, photosynthesis, which may actually consume oxygen at night. I suspect that is why it is so common to wake up with a tank of mostly dead bait.
3) The Magbay guys know how to build a boat, and should know how to build a bait tank (and as I recall, their tanks are pressurized), so I doubt that there is a problem inherent to the design of the tank. I also dismiss the thought that uncured fiberglass resin is killing them, though that could be easily tested by seeing if just a handful of bait has any problem surviving (with just a handful, oxygen deprivation should not be a problem, even at low flow rates, which should be used for such a test).
Reactions: Shewillbemine
Upvote 0

How many times have you used the bait tank (i.e. want to know how many times this issue has shown up for you)?
Upvote 0

Get Barrett down there to fix the flow.

For the price of your rig it should be breeding in there.. however if you picked up bait in Newport it is rarely cured and many times right off the bait boat that morning, but a circular flow should help it settle down. They are hiding in the corners to get away from the sunshine coming through the window.

Vigilant32 said:
Get Barrett down there to fix the flow.

For the price of your rig it should be breeding in there.. however if you picked up bait in Newport it is rarely cured and many times right off the bait boat that morning, but a circular flow should help it settle down. They are hiding in the corners to get away from the sunshine coming through the window.

Also windows are for show, not bait preservation. Well known fact, you don’t see windows on any long range boats that depend on live bait for their living.
Click to expand...

Hate to bump an old thread but I’m still having issues figuring out the bait tank.

Still waiting on MagBay to figure it out, but since only 3 boats were built (2 in Florida) they don’t seem to have it figured out.

Does anyone have any recommendation on who I can reach out to for help? Would love to have someone come troubleshoot and fix this mess!

Thank you.
Upvote 0
A

If me I would just cut it out and have a Blue Water real bait tank glassed in.Not cheap,I think the 38 BW I had Steve Keene build into my 21 Outrage was like 4K done BUT it keeps bait and looks like it was factory.Tom
Upvote 0
A

See if this works 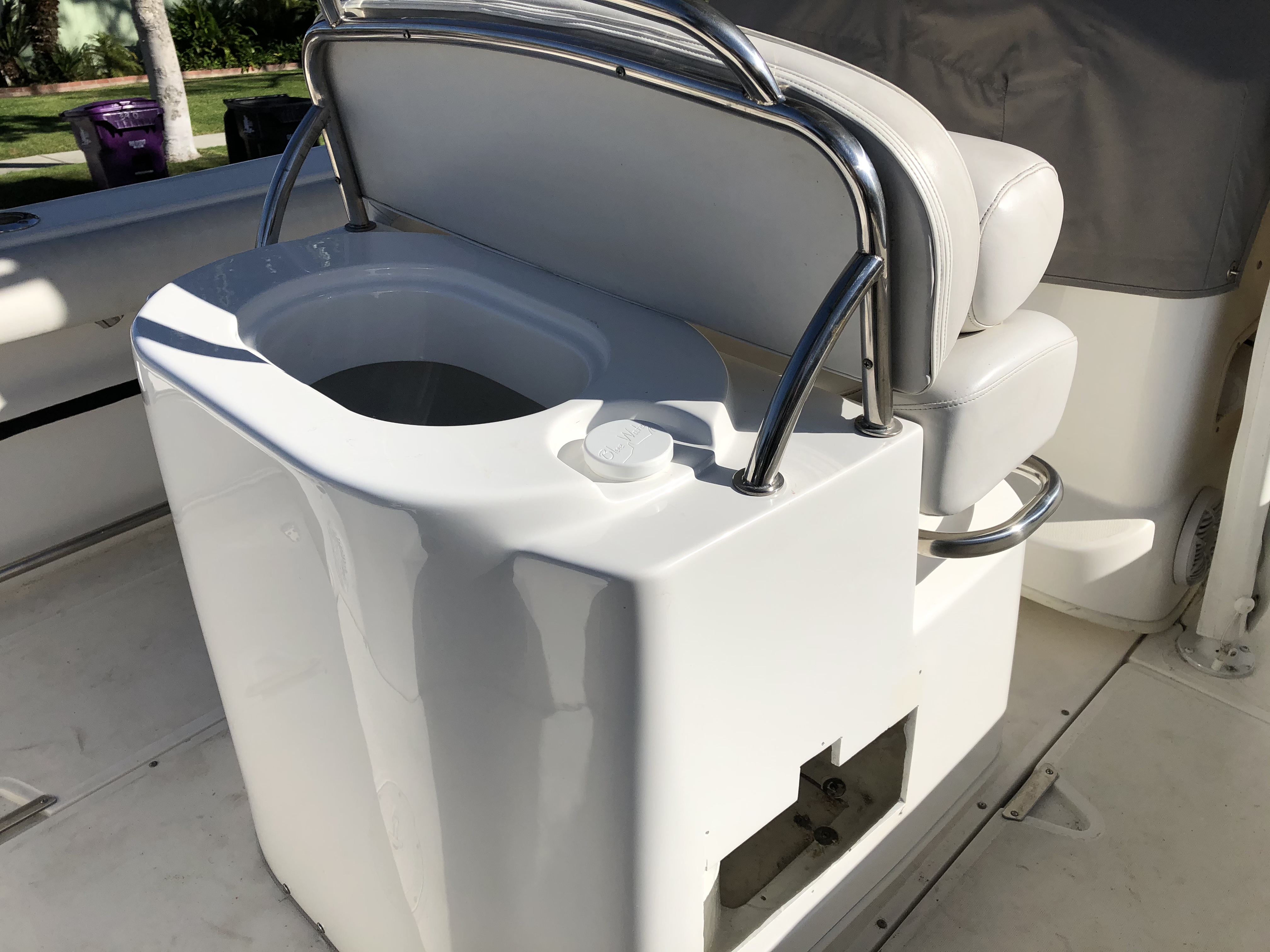 Try covering up the window temporarily with cardboard and tape. As far as they are concerned, anything they see through the window they will view as something that is trying to eat them and they will run to a corner.

Make sure the fill flow is baffled and gentle. They are not trout and do not do good if the flow is like a river.
Reactions: sickcat
Upvote 0

I remember your original post and always wondered if u found a remedy. Lots of good advice above. But yet it still exists….. can you take some detailed picks of your tank? In side, inlet,outlet…. It seams bait tanks have been dialed in yet yours from a big name builder is flawed…. Is there a chance the problem lies downstream? Like maybe something from the pickup to the tank that is intruducting the black magic? Highly unlikely but gotta see the problem from all sides to best find a solution.

how long has this bait been in the tank? They looks really bad…..also have macs had the same fate? 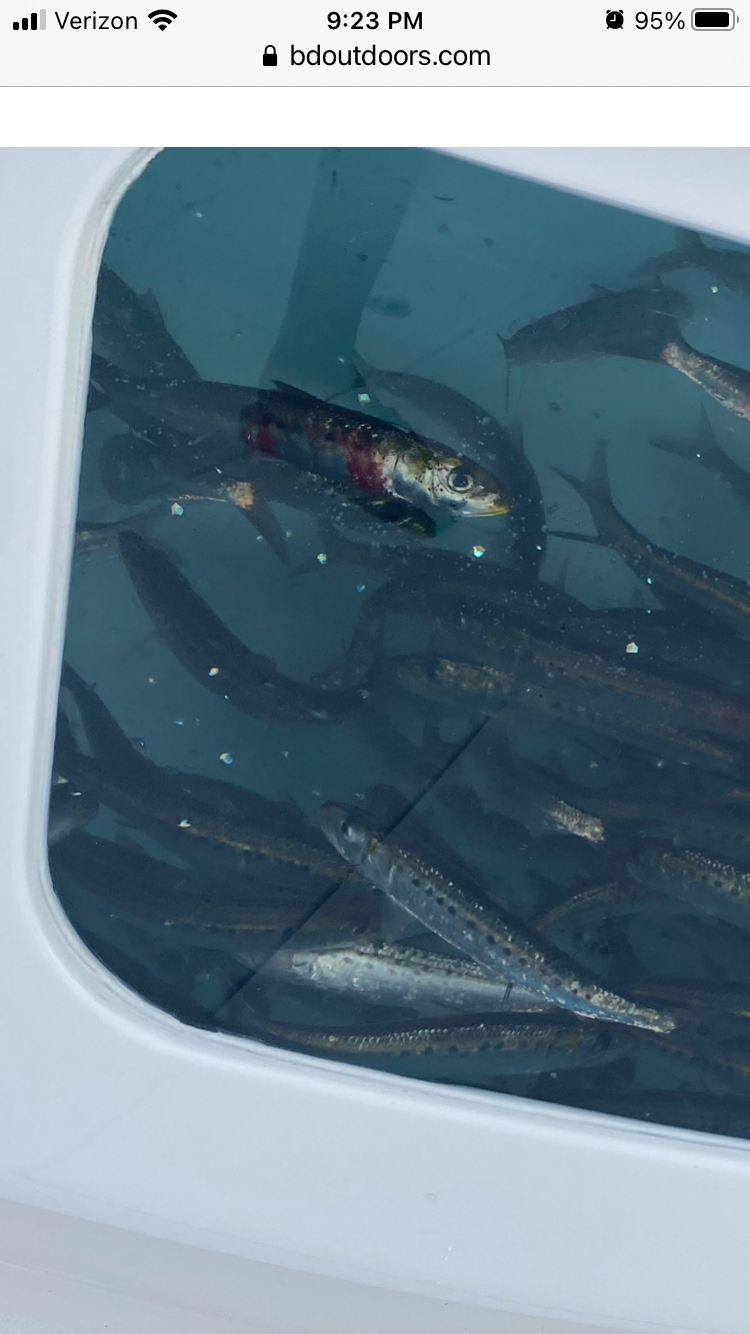 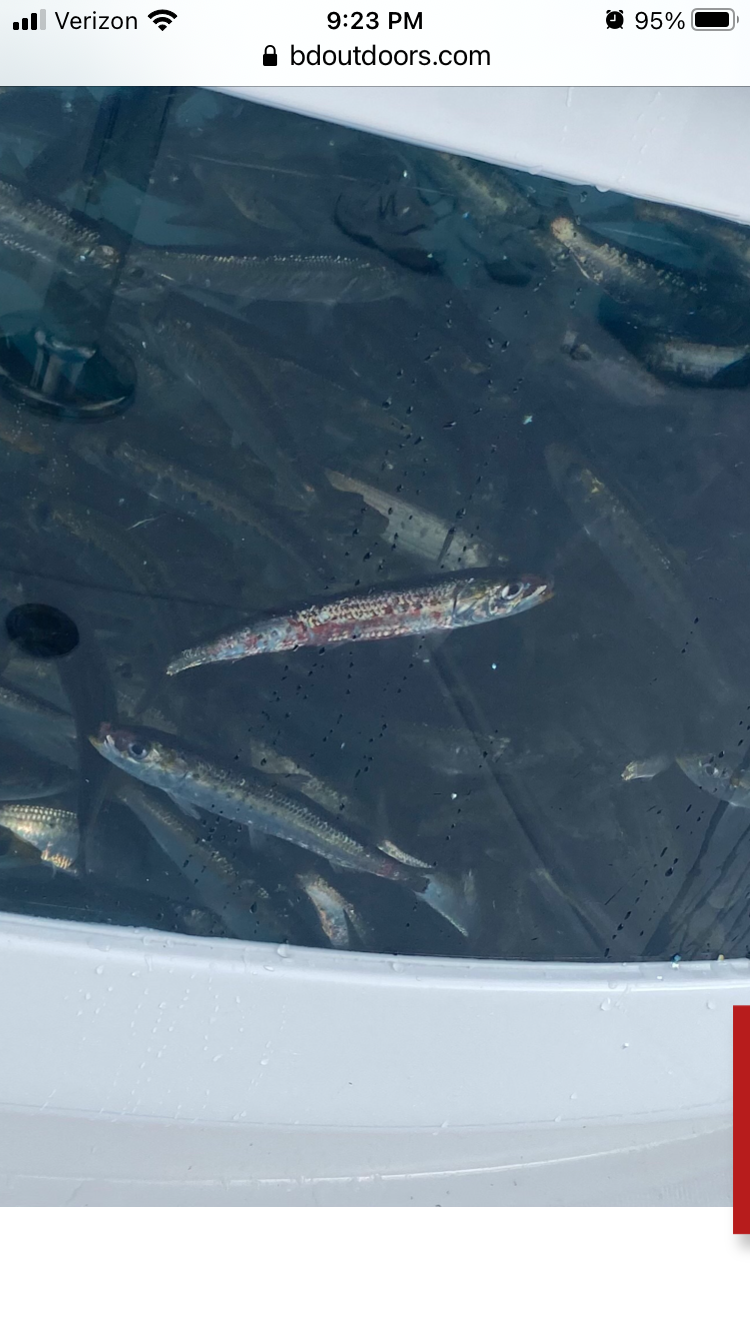 No customer service call from MagBay Yachts? Maybe call Dave New from Basin Marine since they were involved with your delivery.

Covering the window was no help?

Hasn't reported back. Either fixed it or over it.
Upvote 0

thanks for all the tips, I can’t figure it out on my own so going to call Barrett again from MagBay and have them come out. Will update when it’s fixed, failure is not an option.

Contact info on the person who did this build please.
Toggle signature
28 Have you never heard?
Have you never understood?
The Lord is the everlasting God,
the Creator of all the earth.
He never grows weak or weary.
No one can measure the depths of his understanding.
29 He gives power to the weak
and strength to the powerless.
30 Even youths will become weak and tired,
and young men will fall in exhaustion.
31 But those who trust in the Lord will find new strength.
They will soar high on wings like eagles.
They will run and not grow weary.
Upvote 0
A

He cut out my 25 gal live well and glassed in the 38 gal bait tank.I wanted to retain the factory seat-leaning post.Tom
Upvote 0
Show hidden low quality content
You must log in or register to reply here.