Boarded Sunday morning at 10:30, took a while to get bait sorted at the receiver. Off to the grounds and by 3:30pm in the zone with a lot of other boats. Hunter was an epic skipper on the trip with Brian, Berto and our overnight skipper and chef.
By 7pm I had two 30lb fish on the board, flyline no sinker on my 30lb setup. Stoked to have my first day limits I slowed down in anticipation of the evening flat fall bight. Got one around 11pm, another 30lb fish that came to the boat quickly. We did have two brothers on board that both hooked 110lb fish on the flat fall. They were stoked but wrong rod for the fish, had Brian’s and Hunters help in getting the fish in. Fast forward to 12am and they hook up again, two hour fight and the fish takes off right as Brian lands a gaff in it. He nearly went over the rail if not for Berto catching him, young lady on board got it on video, it was gnarly to see the fish take off with the gaff stuck in it.
Fast forward to my experience, Monday was slow only one fish hooked and landed on 30lb sinker rig prior to my hook up. As the afternoon progressed we seemed to be stopping on larger grade per Hunter. I switched to a 60lb outfit. Penn Fathom 60ld 2 speed and Penn Carnage 7xxh, 60lb topshot and 60lb mono, about 150 yard and then loaded with 80lb braid, I felt good about my choice. Stopped at 4pm on deep school and I slowly drop down the 8oz sinker rig. Long soak and on a slow retrieve I get picked up, feeling confident from my Fathers Day trip on the Constituion where I landed a 60lb model I was smiling...wrong....First run was up and out from the boat, nothing too weird but just a slow steady pull dragging line. I have the deckhand Brian come over after me fighting for 15 mins and asking if I need help, yes says I as my back was giving me shit. He plays it for about 5 mins and smiles as he looks up at me, bigger fish he states. I go through the motions of trading off with him every 5 mins or so, emulating his approach of kneeling and rod in the corner, this goes on for 20 -30 mins, he takes the rod again, bigger fish he stated again, hmmm thinks me. I take the rod and off to the bow we go, I let him fight it a little longer, taking turns to let him have a break. The rod was perfect, loaded up nicely and he was happy with the progress. We both went through the angst of getting about 75% of the mono back only to have the fish slowly flip us the bird and just walk the line off the reel, no searing runs just a slow fuck you I’m taking line and there is nothing you can do.
After the one hour mark Hunter comes down to assist, at this stage I’m deferring to his experience in doing this and let them fight the fight. Hunter hands off to Berto for 10 mins and returns to the bow with a harpoon, after last nights loss of a gaff he wanted to be read, he tells me solid 150 to a 200lb fish.
Hunter takes the rod and fights for another 25-30 mins, gaining line but expressing concern that it’s acting weird with no head shakes and the way it’s pulling line. He handed off to Brian and we are so close to getting to deep color when it happens....not a pop but just a poof and that’s it. Fish is gone, I reel in and everything was there with the addition of a nice curly four foot section of the fluoro...tail wrapped it was.
I was bummed but also happy and to have had the experience of what they confirmed as a big fish. We all did everything right and the fish won.
So there was my first real rail rod fishing experience and stoked to have learned it. Cannot say enough about the skipper and crew as they were a top notch operation...I’ll be back. Photo of one of the flylined from the first day 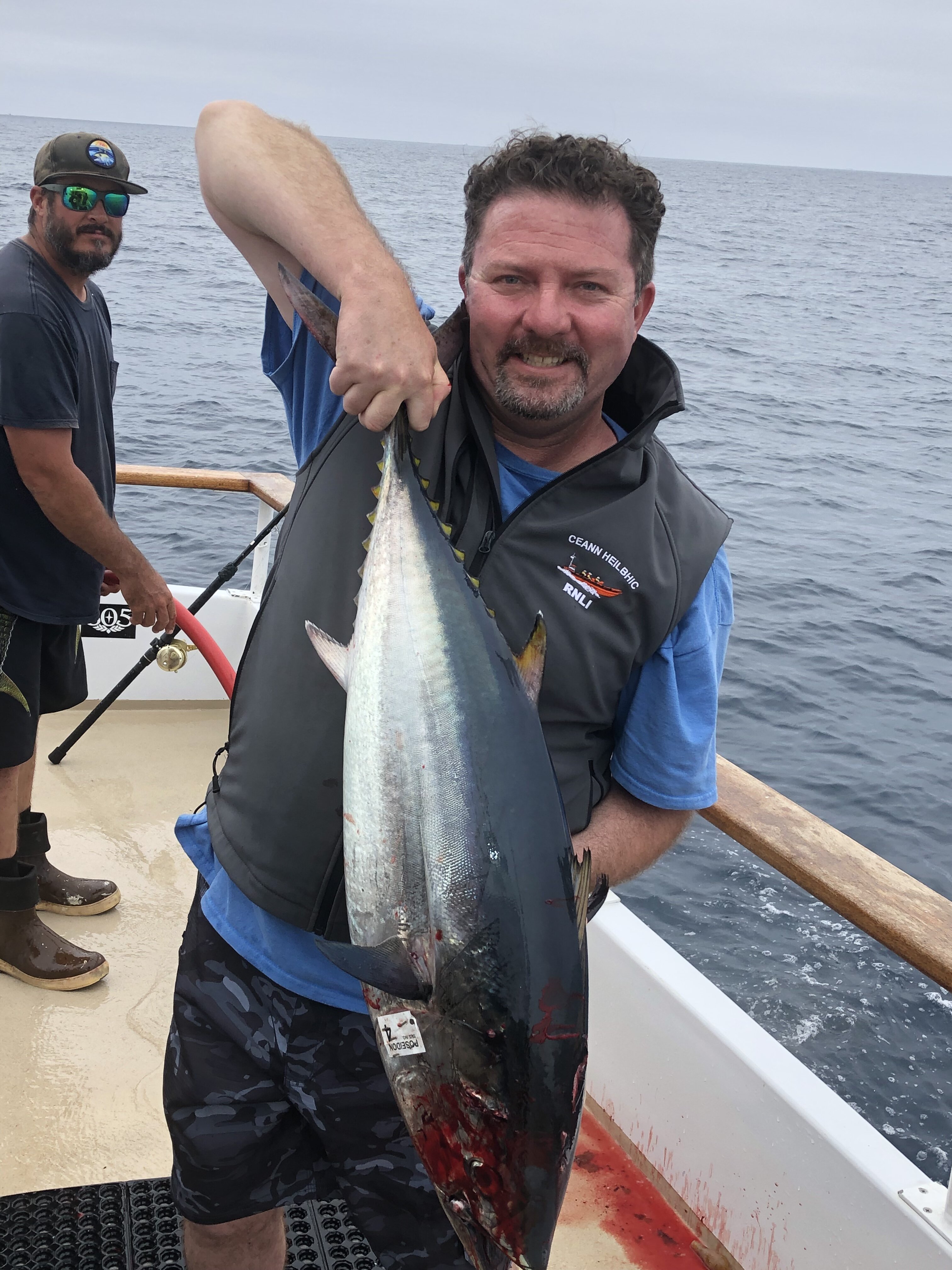 Fishing is fishing...but what the mind catches is unreal and very hard to translate into words.
Reactions: SDSailandFish, dougbenc, palella09 and 49 others
Upvote 1

Great write up. I really wanted you to land that fish! Next time you'll be ready!!
Reactions: Tuna Dreamer and Tom123
Upvote 0
J

Nice job! My first large bluefin was tail wrapped. Fortunately it was on the flat fall with 200# leader. But, man, it was brutal. I feel your pain.
Toggle signature
Get offa my lawn.....
Reactions: Tuna Dreamer and Abusaade
Upvote 0

GREAT REPORT, pics and info. NICE FISH..they all taste the same. Glad you and 2bros had fun trip.
You'll always remember your first "rail rod" fish pinned to rail. You'll get the big one next time!

I've seen guys holding a beer in 1 hand rod/reel in other LAUNCH their rig into the Blue deep jigging with reel in gear. OUCH. I heard a story couple times on tuna boats, about a well known top tuna guy with the full harness/belt on hooked up to a big bluefin, tightened up his drag and got pulled overboard...GONE. The many battles won or lost on the rail, teach you to do it better next time.
Reactions: Bearaz, Tuna Dreamer and Tom123
Upvote 0

Thanks for the report, you will get em next time. every fight is a golden opportunity to learn something new, sounds like you capitalized on it!
Reactions: Tuna Dreamer
Upvote 0

Irishman said:
I was bummed but also happy and to have had the experience of what they confirmed as a big fish. We all did everything right and the fish won.
Click to expand...

Way to stick with it! Next time!

Let'a have a better day today, than we had the other time.
Reactions: Tuna Dreamer
Upvote 0

Great write up. Keep fishing and you will have redemption!!
Reactions: Tuna Dreamer
Upvote 0

majority of times you tail hook the fish during the retrieve. Nothing you can do, except enjoy the fight . Good luck next time. Thanks for the write up
Reactions: Tuna Dreamer
Upvote 0
H

I am embarrassed for you.
Toggle signature
Hillbilly
Upvote 0

I like your attitude. You win some and you lose some. As much as you’d like to get the bigs ones in, quite often it doesn’t work out that way. You can moan and pout forever, or you can be happy you had the chance. Just remember, if you win the fish dies. If the fish wins you’re still alive.
Reactions: RodRage and Tom123
Upvote 0

On my last trip there was this one guy, nice guy, who just couldn’t get any love. People catching fish all around him, just not his day. Finally, almost at the last hour, he hooks up. A tad undergunned and not too experienced it was like your story, getting a lot of help from the crew with that fish. At color, gaff at the ready, the leader snaps. Crocodile tears until another angler instantly yells hookup!

. The fish had tail wrapped itself on another line during the fight

. Even got the jig back

The fish our there can be real ass kickers-just got back from a Producer trip, lost a jumbo to a pulled hook. The knowledge you gained will allow you to get them next time! Just got done cutting up a #30 now, good grade of fish.
Toggle signature
He' on again?
Upvote 0

what exactly do you mean by "confirmed"? how did they possibly confirm when you never saw it? when a fish is tail wrapped it makes it feel MUCH larger than it actually is. probably a good 60 lb fish. oh well, next time.
Upvote 0

mike82 said:
what exactly do you mean by "confirmed"? how did they possibly confirm when you never saw it? when a fish is tail wrapped it makes it feel MUCH larger than it actually is. probably a good 60 lb fish. oh well, next time.
Click to expand...

Not really Mike, not often you have four guys rail fighting a 60lb fish, three of the four do it day in and day out for a living, lastly skipper and crew “confirmed“ the fish size by their comments. I never made mention of me calling the fish size. A good sixty pound fish I brought in easily the week prior on the same rig.
Toggle signature
Irishman

Irishman said:
Not really Mike, not often you have four guys rail fighting a 60lb fish, three of the four do it day in and day out for a living, lastly skipper and crew “confirmed“ the fish size by their comments. I never made mention of me calling the fish size. A good sixty pound fish I brought in easily the week prior on the same rig.
Click to expand...

the important thing is you had fun. next time.
Upvote 0
Show hidden low quality content
You must log in or register to reply here.