Been wanting to post my little project here for a while, finally got it to a point where I feel it's worthy!

Long story short... I grew up on the shoreline of Connecticut, my dad had a 26' SeaRay Sundancer we used to take across Long Island Sound and sleep on as a family. He also had a 15ft Whaler we'd rip up and down the Connecticut River, and his side of the family had a lake house with a 17ft Wellcraft we all learned to waterski behind. Next thing you know, I'm a grown ass man living in Santa Barbara, been thinking about getting a little boat as I spend more and more time around the harbor, realizing the big driveway I have at the place I rent would really help make things cheap and easy. Started searching for Whalers to try to get a feel for pricing, somewhere along the way learned about Livingstons and started seeing all the homebrew cabins and the super cool stuff Ryan @ Off The Hook Boatworks is up to...

Unfortunately in April 2020 my pops passed away suddenly & unexpectedly, which definitely took a toll on my mental health coinciding with all the COVID lockdowns. It also ended up pushing me to start taking the boat dream a bit more seriously, reinforcing that life is too short to wait to do the things you want.

Originally, I thought I'd be in for a long haul up to Oregon or Washington to find a project in the price range I was hoping to pay, but I somehow lucked out and in May 2021 I scored this 1987 14' Livingston in great shape from Orange County Craigslist. Pretty much all original with the stock center console and an 1987 40hp 2-stroke Tohatsu, all sitting on the original trailer. I'm the third owner, supposedly the first owner was an older guy in LA who bought the package new but ended up hurting his back and rarely used it. Second owner was the guy in OC who I bought it from who had it as his "backup fishing boat," also rarely used. Nice.

From the CL ad 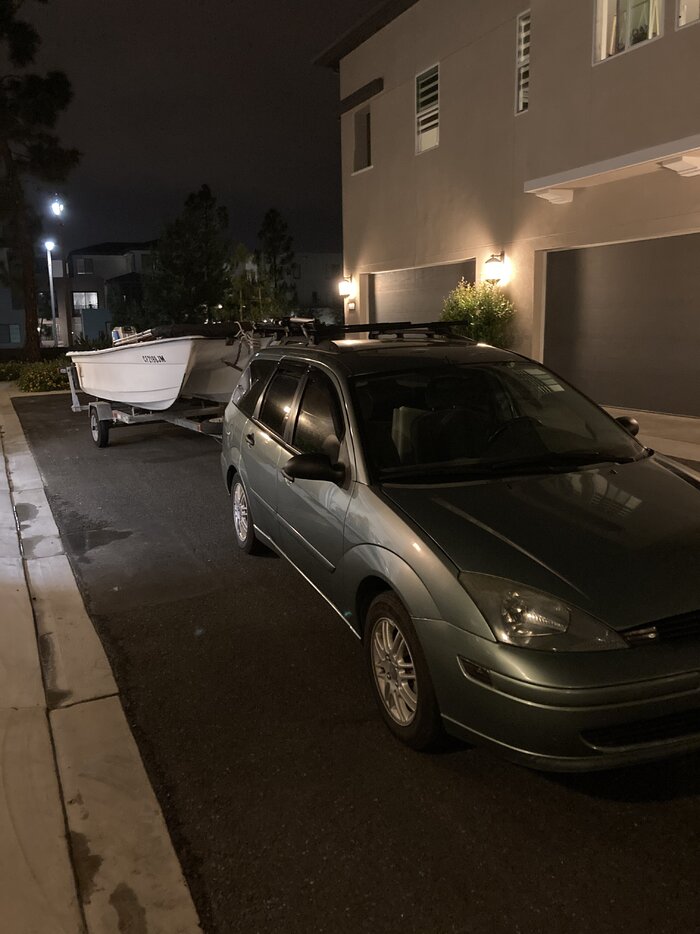 The night I scored 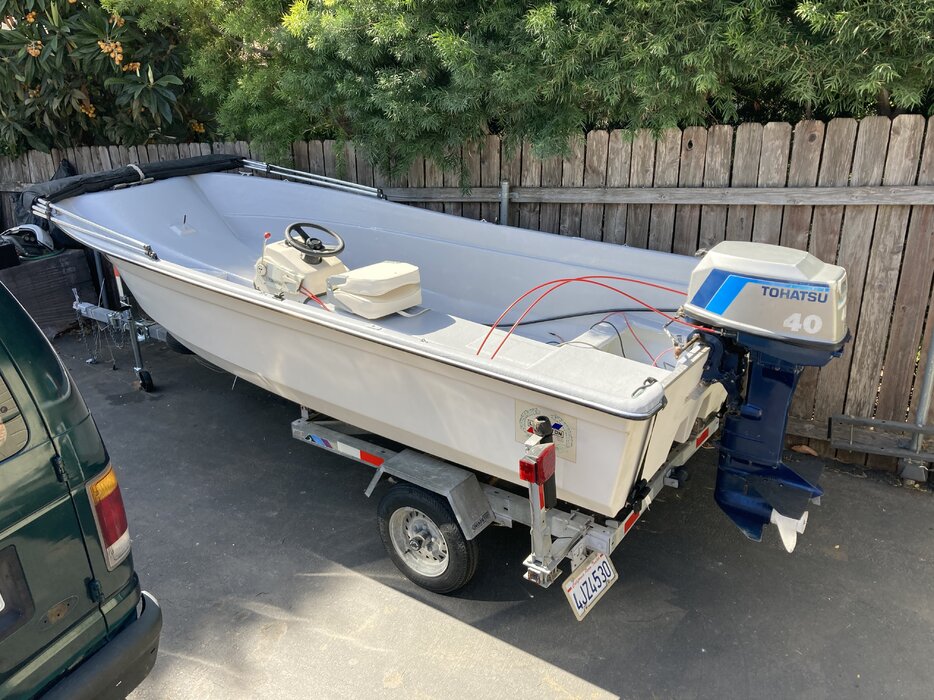 What I woke up to in my driveway the next morning


I originally thought the little center console setup would be great and keep me occupied for a while, but after running the boat just a few times it became obvious the ergonomics were less than ideal. At 6'1 I felt goofy and uncomfortable sitting down, but running the boat standing up meant I could barely reach the wheel and kinda felt like I could fall out at any time. No bueno. This is a video a friend shot of me running the boat like this. At this point I was having a ton of fun taking the boat out and it was becoming obvious how capable the hull is, but the ergos just weren't there. Time to start working on that... 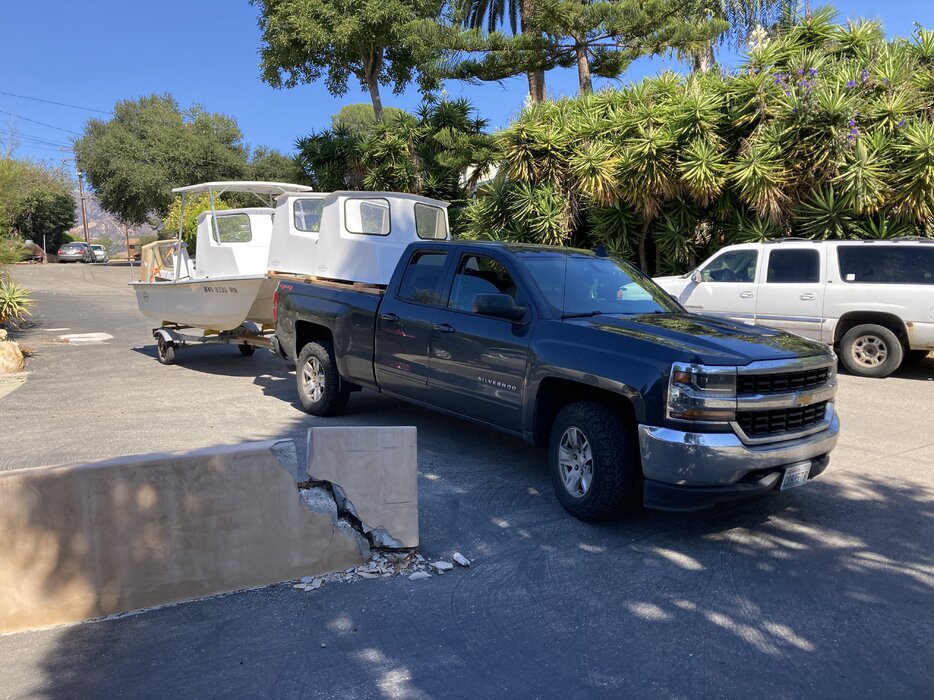 Your delivery has arrived! Note, just one of the cabs was for me - I was the first of a few stops for the driver 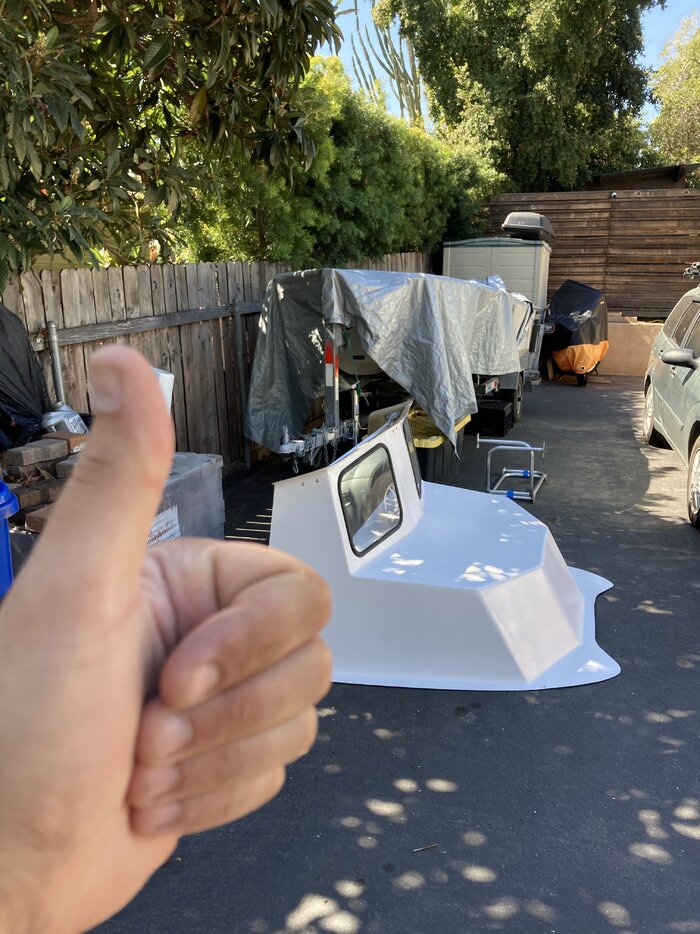 Stoked! Time to get to work 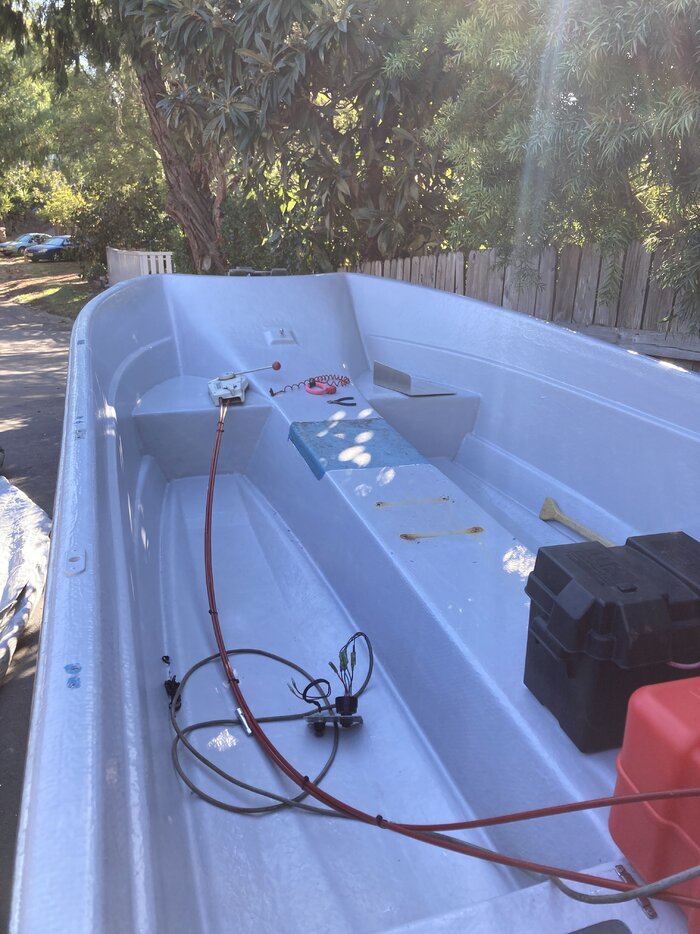 Pulled off the console to learn it was still OG blue underneath, time to fix that and some holes along the gunwale 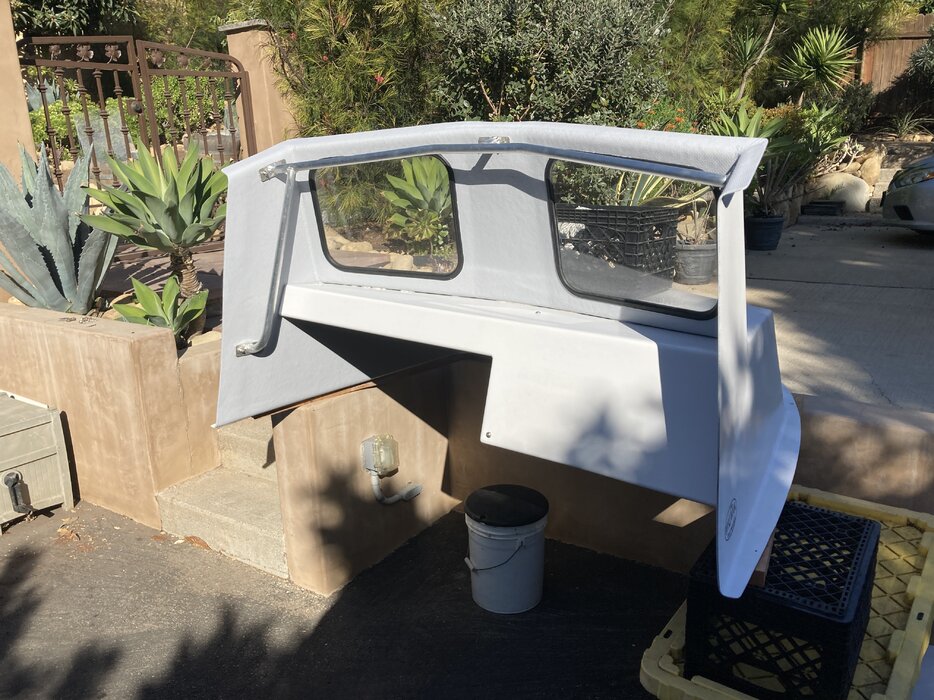 Also time to paint the inside of the cab to match 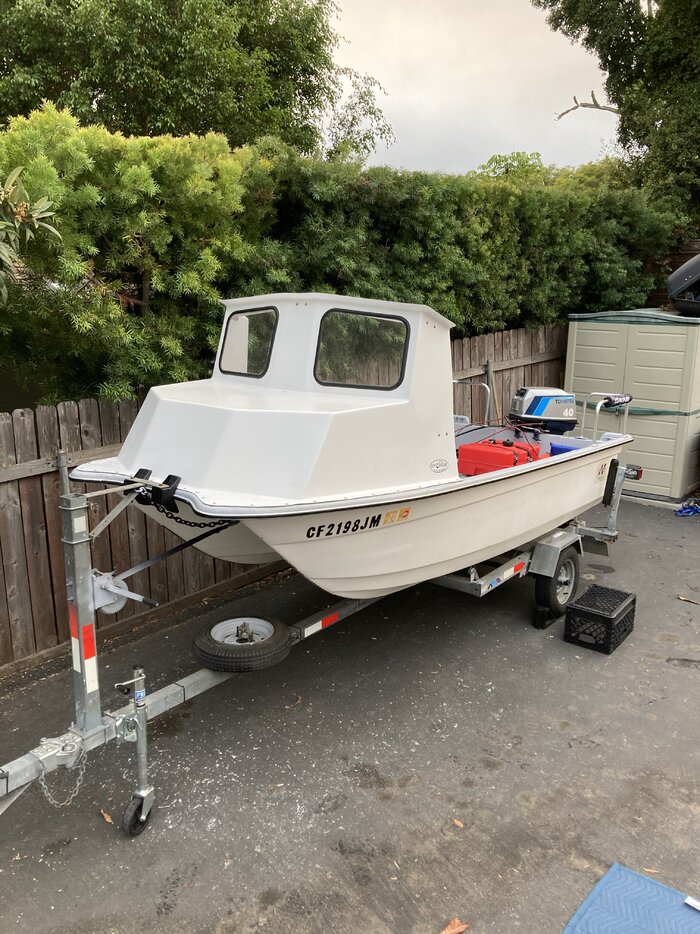 She's on! This was a super rewarding day. It's crazy how the cab changes the feel of the whole boat 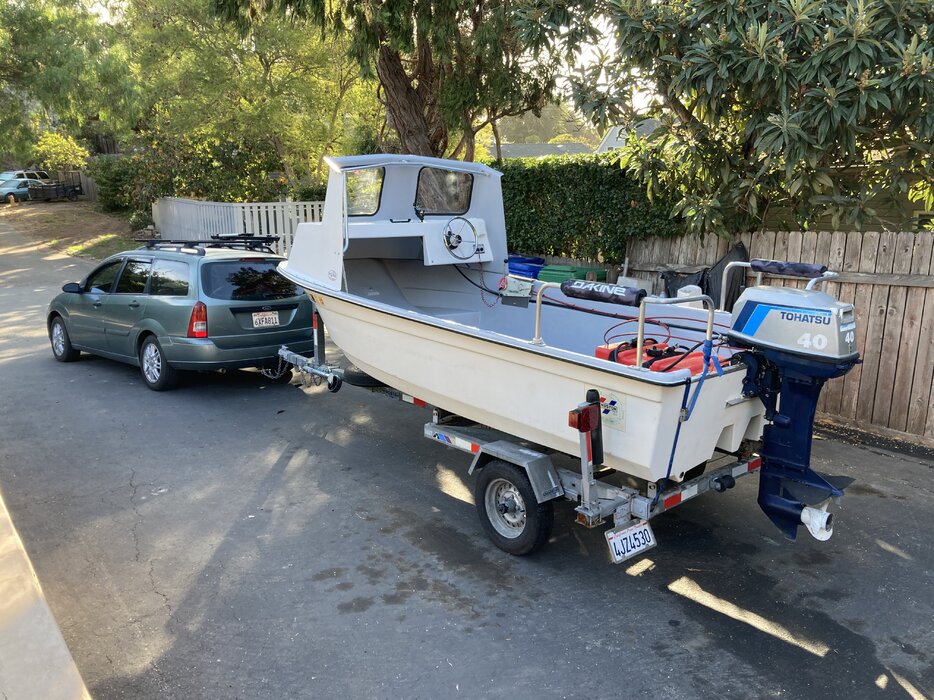 Super simple rigging at first - goal was to get the boat usable and take it out a few times before deciding what was next. Nothing like pulling your boat with a 4cyl station wagon! 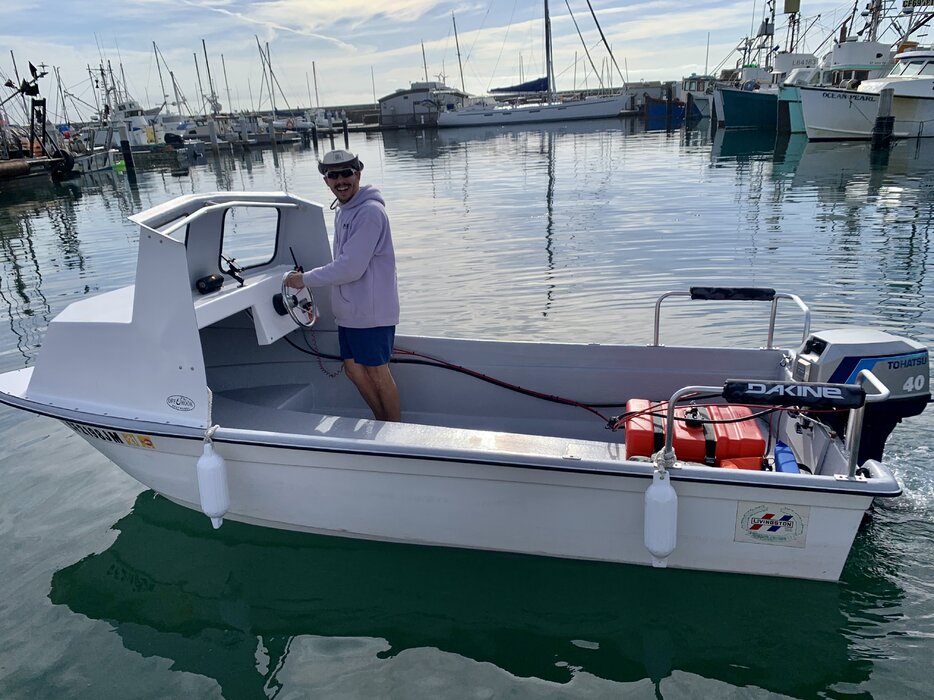 Photo a friend got my first time out with the cab on. The boat felt pretty big and wide open for what it is, but I knew eventually I wanted some permanent seating. Also, the humps and curves in the floor of the boat start to become an issue with the controls mounted forward - where I was standing was not flat and would get pretty uncomfortable in any kind of chop. Time to do something about that... 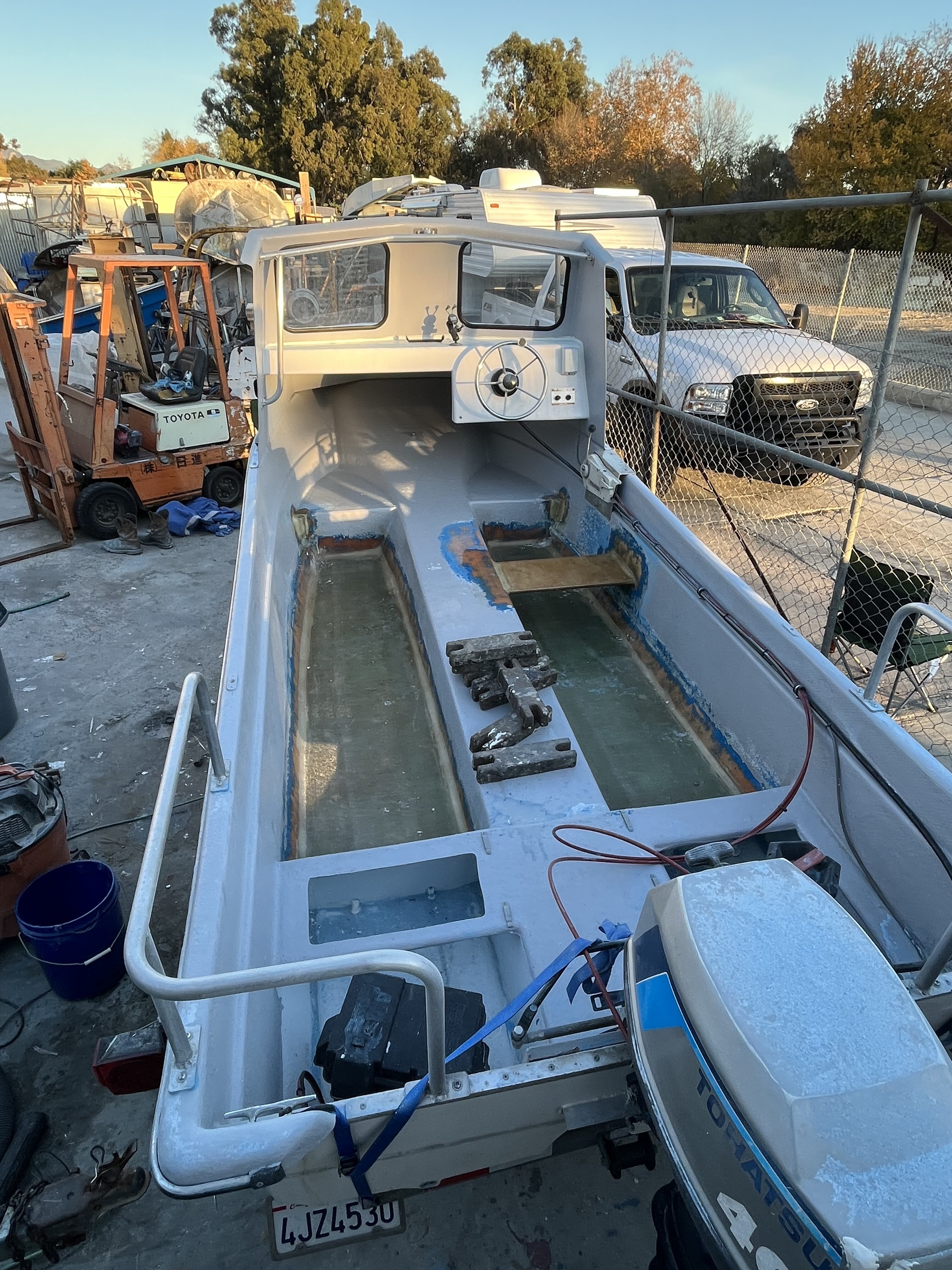 Got in touch with local fiberglass guy Travis Harder after seeing some of his work on the Livingston Boats Instagram page. Told him what I wanted and here's the magic he worked: nice flat full-length Divinycell decks, 3/4" marine ply glassed in for a seat support, and two vertical tubes glassed in to the front corners for this idea I had for a gear saver sorta inspired by a stake-bed truck. More below. 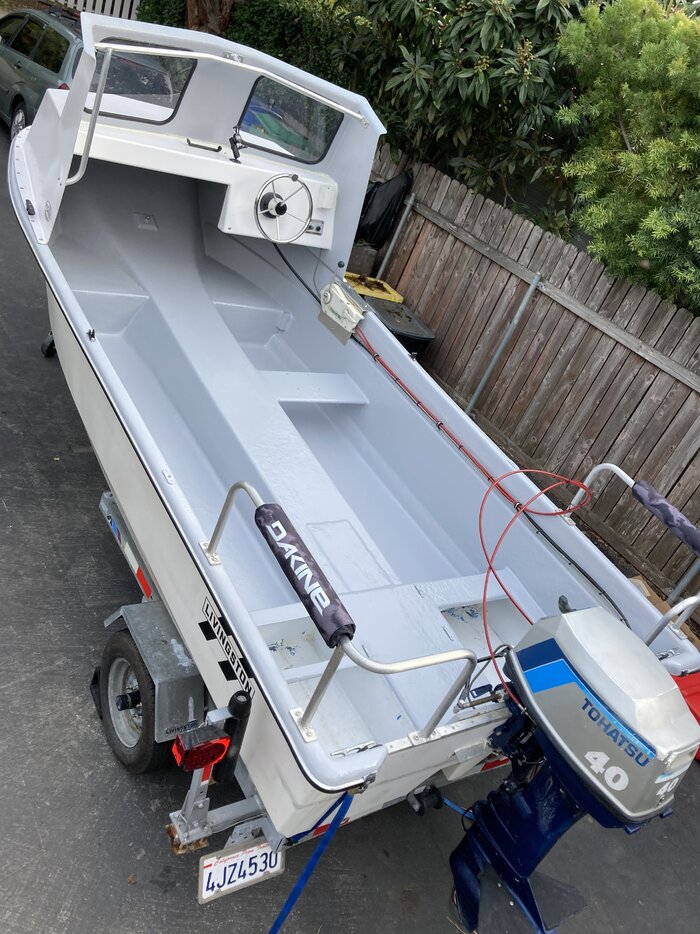 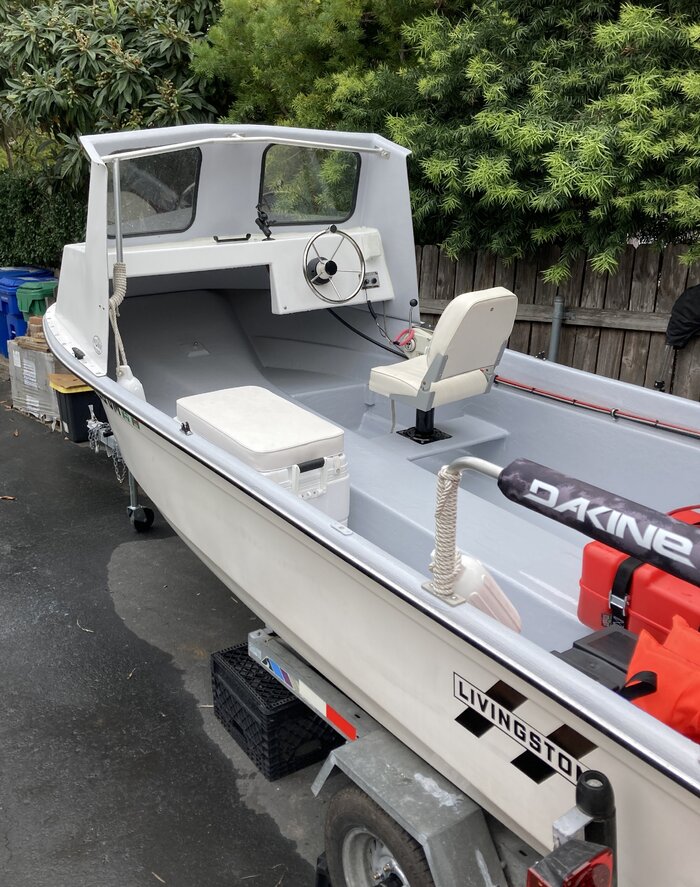 And with the captain's chair installed (same one that originally came on the boat, fresh pedestal and swivel). Decided to go with the Igloo cooler for passenger seating so I can move things around and keep that port side hull wide open if it's just me running the boat. 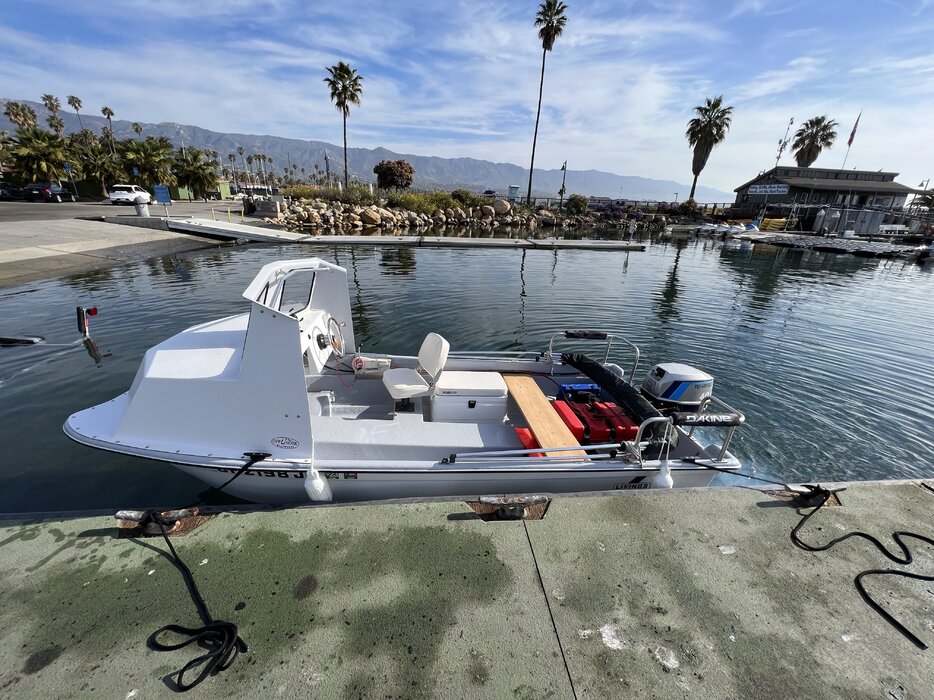 Built this wooden bench for the back of the boat, it just sits on the little lip built in to the sides of the boat but isn't the most stable. Might have to revisit that idea. Also found out the bimini top that originally came with the boat still works well! 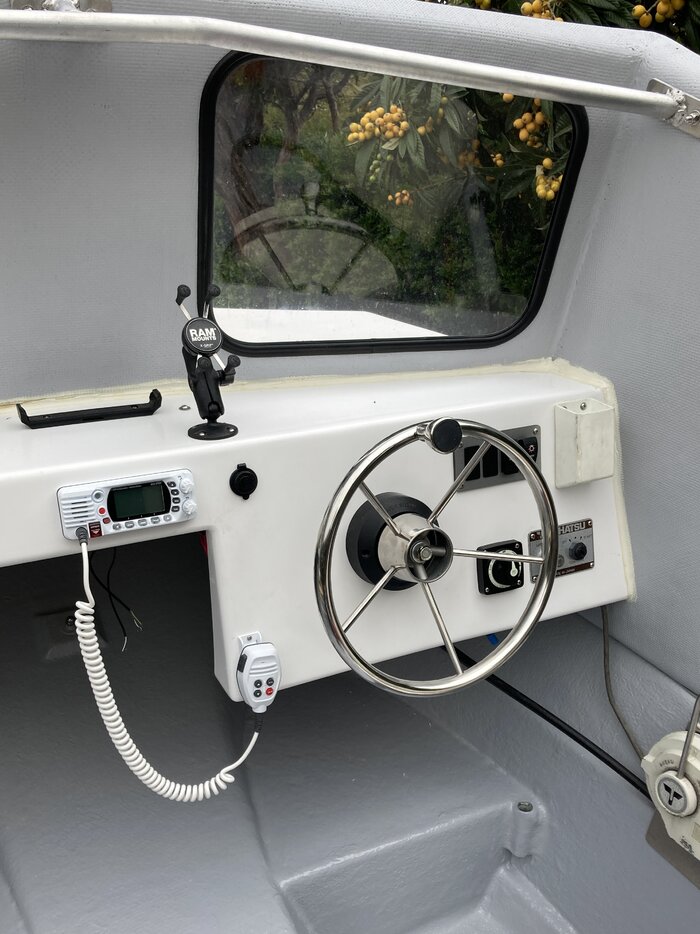 Decided it was time to add a real VHF, lights, and some other basics. Up until this point, the electrical system had been dead simple with just an ignition and engine cut off switch. I added a Standard Horizon GPS-enabled VHF, Blue Sea USB outlets, Blue Sea battery switch for the accessories, a New Wire Marine 4-switch panel, SeaSense bow/stern lights, an LED strip light under the cabin, and a Blue Sea breaker panel to power it all. Everything is installed but I'm currently awaiting battery cables and wiring to get it all hooked up. Blank switches are for two bilge pumps (one for each hull) that I hope to install in the near future. 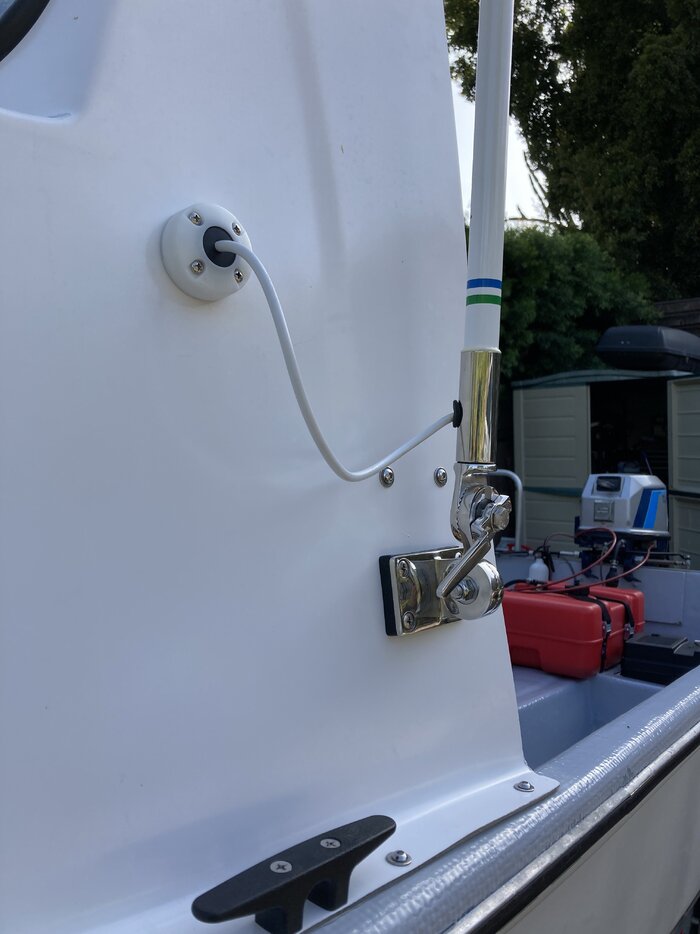 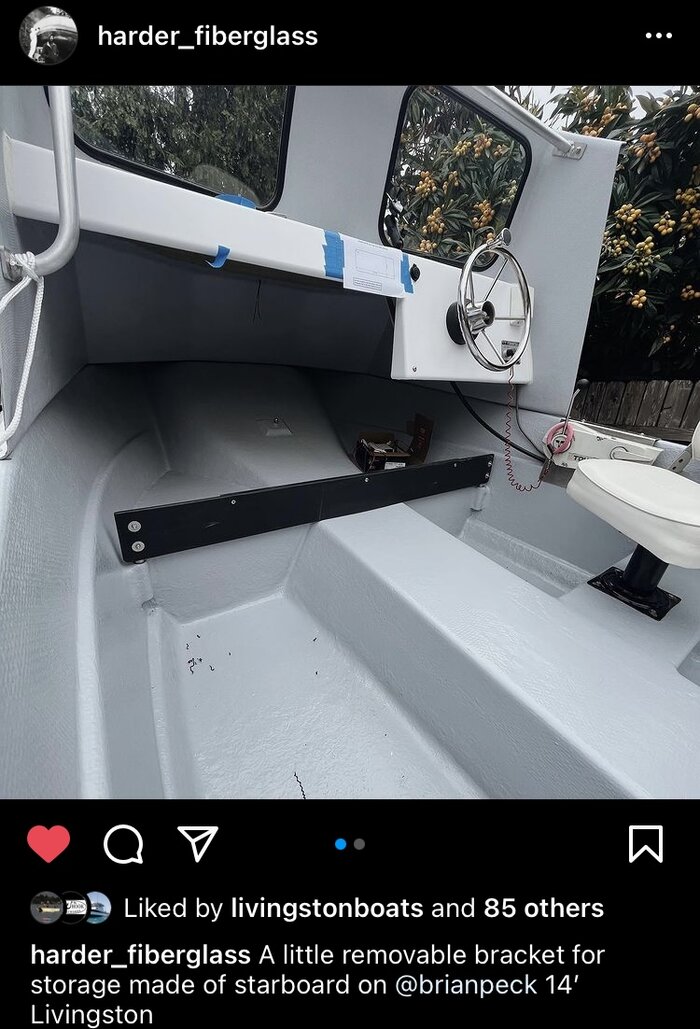 Here's that gear saver I mentioned above after Travis got it built out of Starboard for me. This under cabin area is perfect for storage but gear loved to slide off towards the back of the boat, even just getting up on plane. This should fix that! 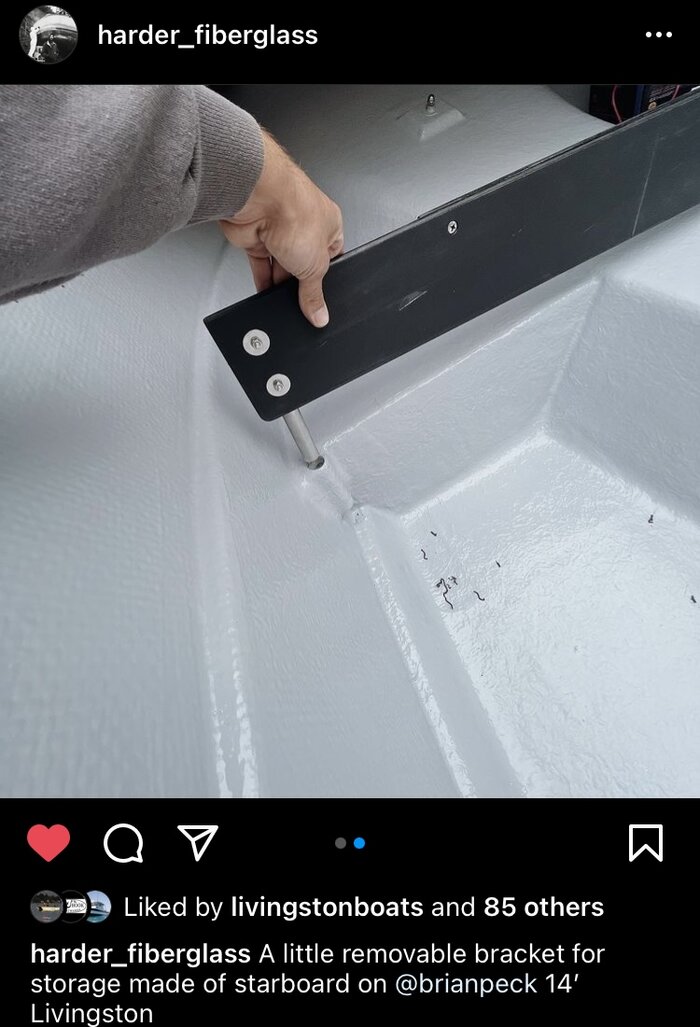 Removable because I thought this would be a better solution than permanently glassing something in place. 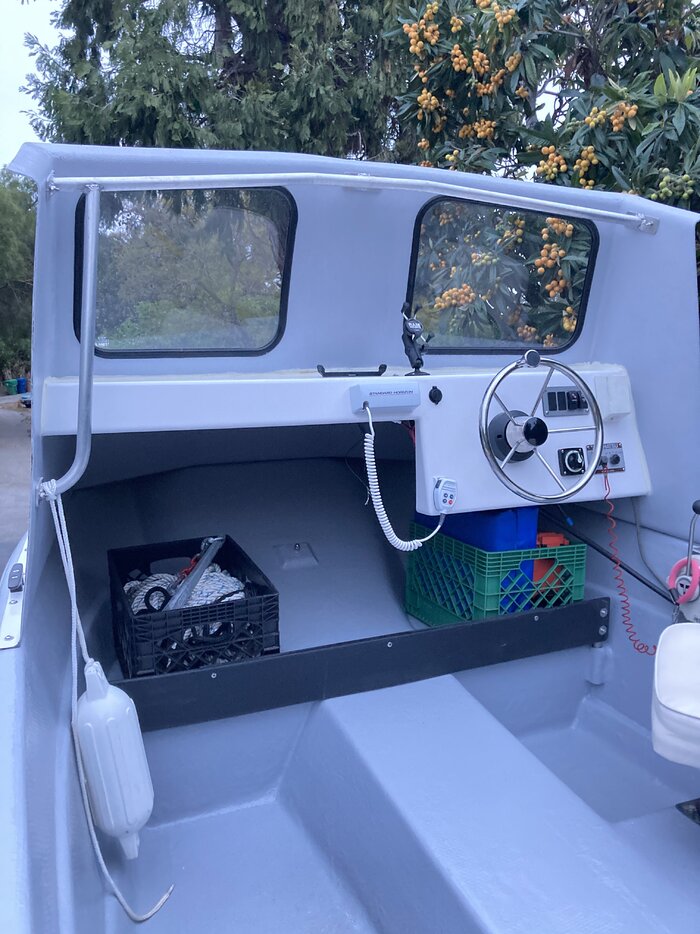 These big milk crates fit perfectly snug and help lock the gear saver in place. Now I can keep my anchor, life jackets, bags, wetsuits, etc. up here and know that everything will stay dry and not budge.

And that's where she currently sits! Next plans are to wire everything up, probably install a compass and maybe a navigation system (I've just been using my phone), install some bilge pumps and to use the crap out if it! Probably should have mentioned earlier that I don't fish at all, just plan on using the boat for cruising the coast, surf and dive missions, and island runs on select days. She's cheap to run, easy to launch by myself, and fun as all hell! Thanks for checking out my boat
Last edited: Apr 25, 2022
Reactions: sbsurfer, CHADDY, Jose Caballero and 22 others
Upvote 1

You guys are lucky I'm not into fishing or I wouldn't leave any behind for the rest of ya!
Upvote 0

Wish I was new

You,lol be fishing in no time. We all said that at one time
Upvote 0

Awesome stuff Brian! You are getting her dialed perfectly! Thanks for sharing the journey!
Toggle signature
"Share the stoke to expand your own"
Current: "Reblochon" 1989 LV14 - 2007 Honda 30HP
Seeker rods and Newell / Shimano reels Primarily
Past: "Raclette 74" Costco...Tobin Sports aka HydroForce 11ft - 2020 Yamaha 9.9
Upvote 0
C

Very nice work Brian! One of the most thoughtful layouts I've seen. Now that you have had several months to enjoy it, I'm wondering if you would have done anything differently. I recently purchased a very similar setup; 1986 Livingston 14' with 1993 Tohatsu M40C. Are you cruising @ 23-25 MPH and 30 MPH @ WOT?
Upvote 0
B

Do you mind telling how she fast she runs at cruise and full throttle? How does handle head and following seas?
Upvote 0
B

Quick update - I epoxied in two teak strips up under the cabin, attached some QuickFist mounts, and now I have a safe and handy place to store my stern light pole and paddle. Boat's been feeling good and the weather cooperated so I made my first run across the channel to Santa Cruz Island, was very pleased to have nice flat seas there and back. 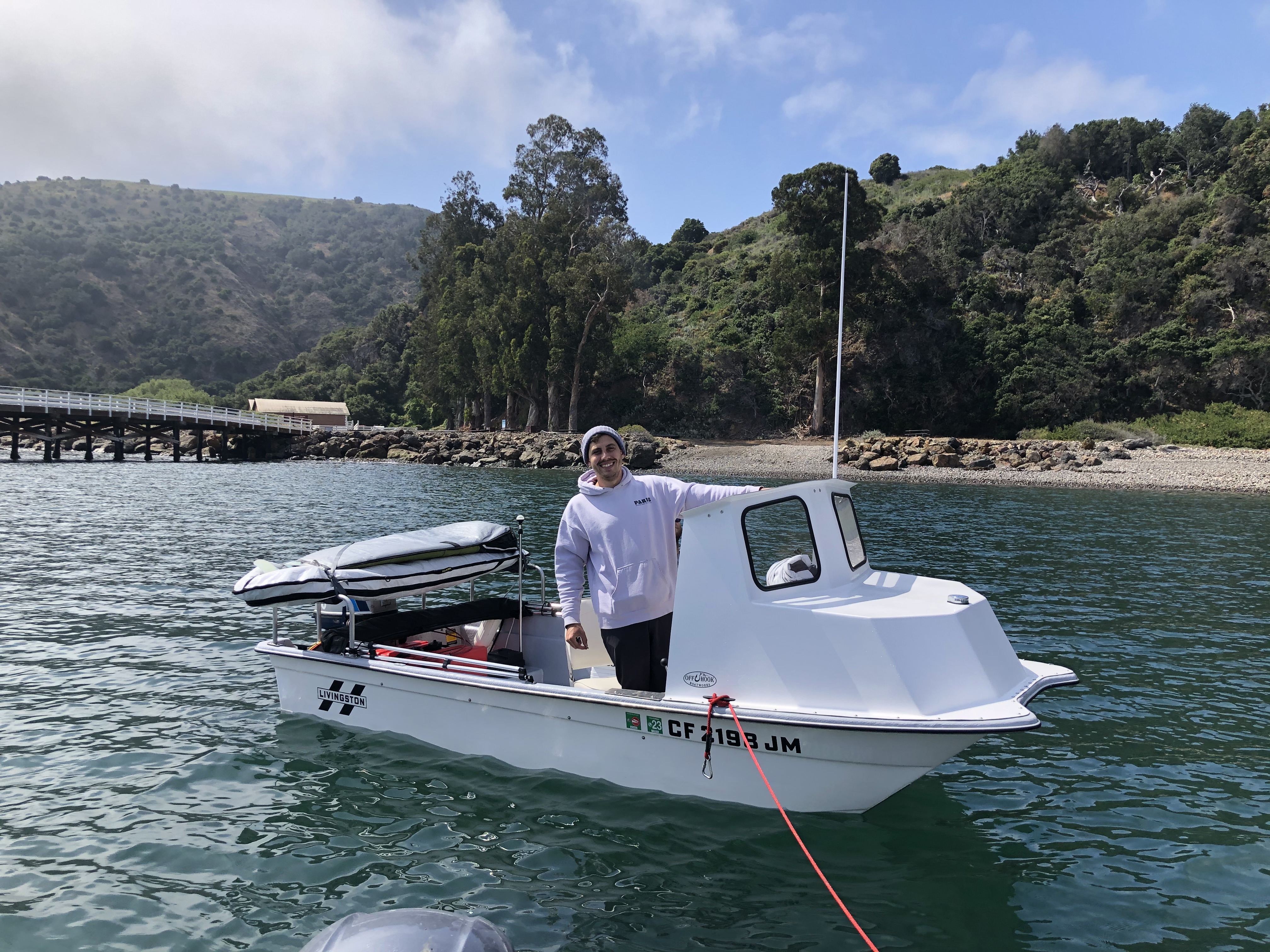 Hello Brian,
I am trying to find the correct dive ladder setup, do you mind sharing what your solution is?. I am very inspired by your project, appreciate the guidance.
Upvote 0

ConchyJoeATL said:
Hello Brian,
I am trying to find the correct dive ladder setup, do you mind sharing what your solution is?. I am very inspired by your project, appreciate the guidance.
Click to expand...

I haven't had any problems climbing back in over the edge of my boat in the back corner, using my stern rails for a little help.
Upvote 0

Sweet build! Thanks for sharing
Upvote 0 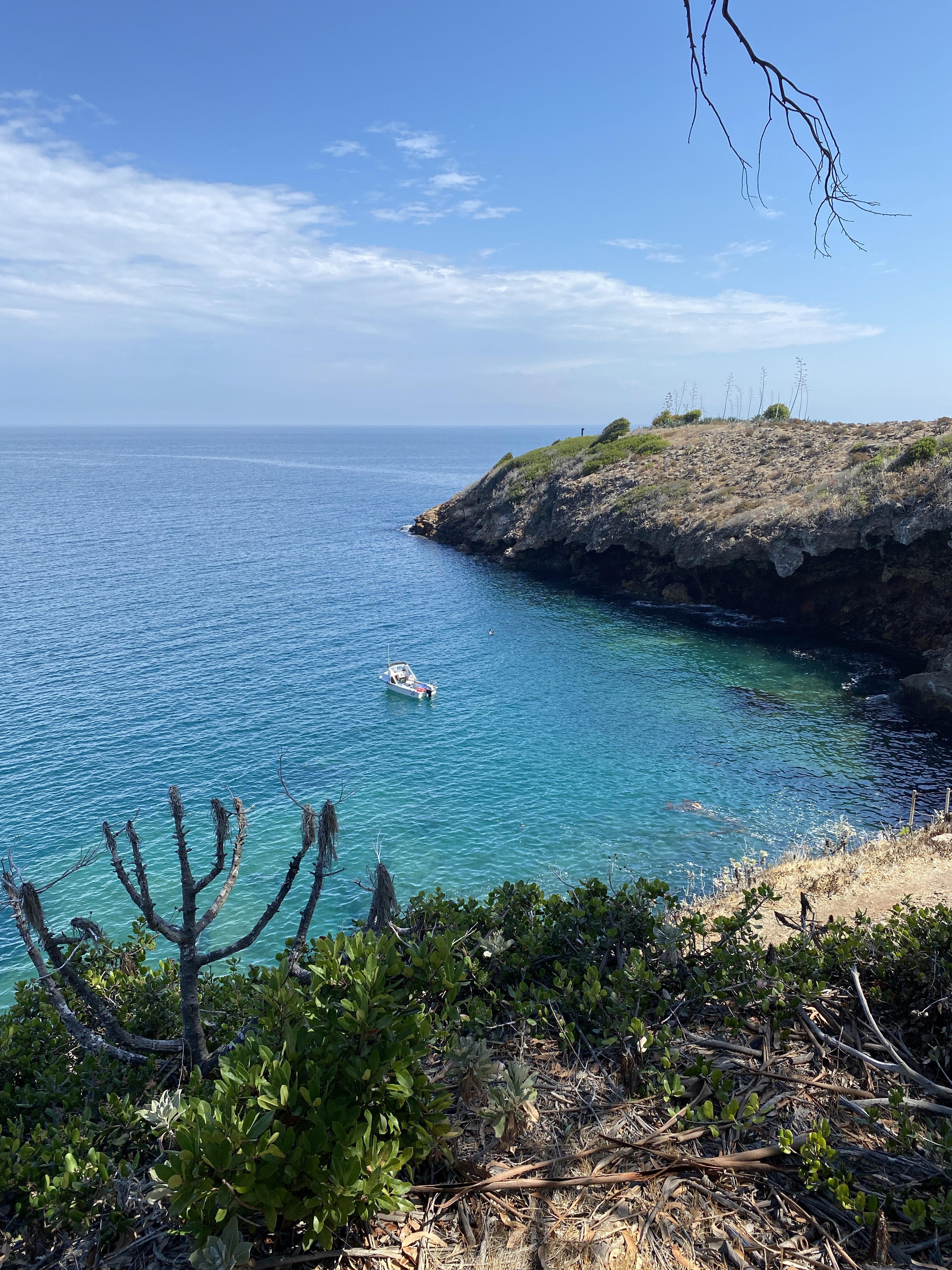