I know this is basically a week late, but life happens.

last week I took a buddy who is a "Newbie" on an overnight out of Channel Islands Harbor on the Mirage. I put it in quotes cuz of course he says he's fished before and caught fish, but one look at his reel / rod handling skills and I knew he'd appreciate help.
so, I pulled together a pair of outfits for each of us and made the drive up to Oxnard to get on the Mirage on Tuesday night at 10pm
after loading up and the safety talk, the captain (forgot his name) let us know we'd be steaming out to San Miguel Island and were looking at about an 8hr ride. couple a beers and some tactical talk on the stern and we hit the bunks with the rest of em
we woke to a nice sunrise, but it clouded over shortly after and by say about 6:30am we were dropping into 250-300' for the classic mix of rockfish and an occasional whitefish. nothing special, mostly 2-3lbs with a few standouts maybe nearing 4lbs
we moved a few times and things began to pick up
limits of rockfish for the 20 passengers by say 10:30am
but the standout moment for me happened around 9:30 .. . I asked the captain if they were hitting flat falls, to which he replied "that's what they're made for . . . " and I tied on a 160gm blue and pink and lobbed it off the bow. I had my first one on in less than 30sec and another 4 in 4 minutes. I was kinda laughing at how easy it was and my friend (the newbie) asked what I was up to. I explained the basics to him, handed him my set up and grabbed his to tie on a different jig, a silver 200g. got him next to me on the bow and told him to just drop it down as he didn't need to complicate things with casting. well about 30 sec down he says he feels he's hooked up. told him to start winding, slow and steady. when the brilliant red began to show color I quickly fetched my phone outa my pocket, got the action shot of the fish breaking the surface and shared the buzz with him when he hauled the little fella over.
"what is it?" he asked me
"the fish I was trying to catch you fucker! that's a nice one!!"
"what do I do?"
"take that sucker back to the stern where the deckhand is and tag it!!"
as he ambled off around the bow, I yelled for him to hold on "we need another photo, hold it out"
he looked awkward, and out of his depth, but he looked SO damn happy that it was all that mattered.
I was proud and so satisfied with the simplicity of it.

we kept on fishing until those limits were achieved around 10:30am
the captain then had us making a short move to fill up on some white fish and then begin our grinding ride home around noon back to Cisco's.
while were enjoying cold beers and shooting the breeze with the rest of the gang, rehashing little moments from the day, he leaned over and told me "that one red was my best fish of the day". and that "i'd never caught so many fish in one day in my life".
that was really all I needed to hear.
it was a fun day for me, I caught fish, but it was my first time taking out a friend who'd been wondering what the hell it was I was doing out on these boats. I wanted him to have fun more than I did. I wanted him to catch fish and maybe even to wanna go again some day.
I accomplished that and I'm sure he has been telling his own fishing tales since last Wednesday.
I even kept his fish overnight and vacuum sealed em for him early the next morning. before I cleaned up all my gear (our gear really). I delivered it to him later that afternoon and he'd kept one fish whole. it was that red.
he put that sucker straight on the grill and just smiled
I left so he could have his own moment, maybe share it with his girlfriend.
when he texted me later to say he hadn't even waited for it to be finished cooking and was just picking at it with a fork and squeezing lemon on it, I knew he was in his own version of hog heaven.

it was my first time on the Mirage.
I will say an outstanding operation!
the captain was really friendly and came out several times to help when it was needed
the deckhands were great!! right on top of any and every situation, though there wasn't;t much to deal with besides tagging fish
Marissa in the Galley was a force. of course I remember her name, you would too. but that's not the point, she made fantastic breakfast burritos (I had one) and outstanding looking burgers (I was too full from that burrito, but next time . . .)
I'll return some day for sure! 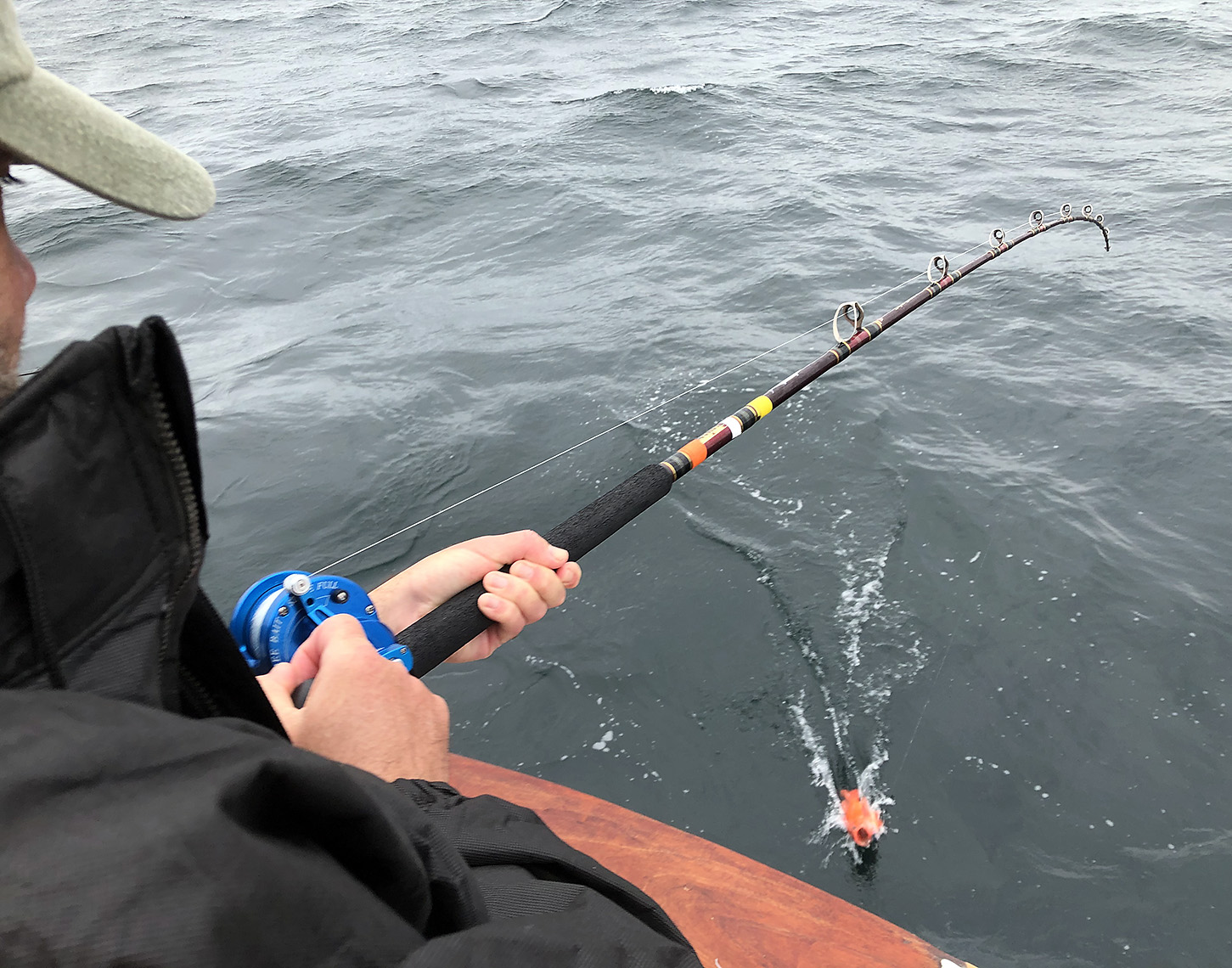 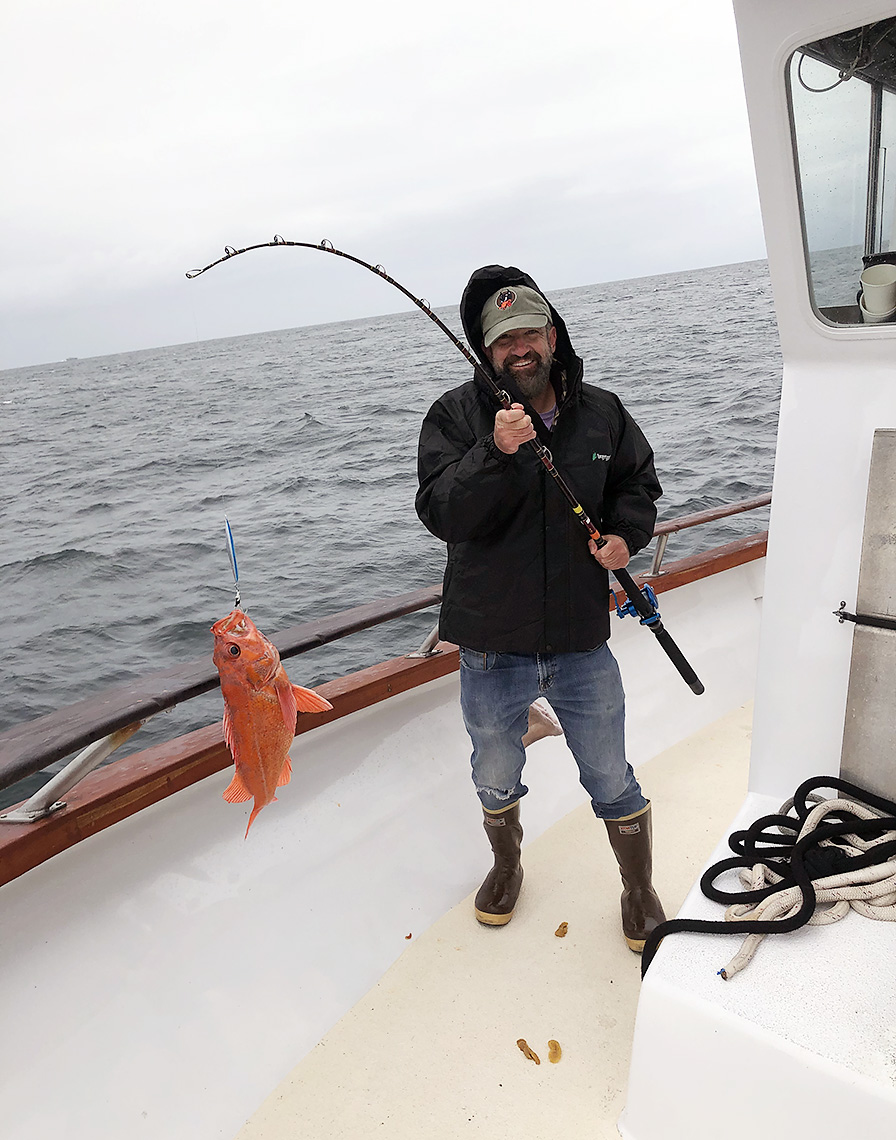 Great job settling your friend up.
Great Boat and awesome fishing.
Your friend will hate you for life for knot telling him what happens to us Fishermam.
The cost.
The excitement.
The never ending quiver.
Reactions: tom fowlks
Upvote 0

pacificscout said:
Great job settling your friend up.
Great Boat and awesome fishing.
Your friend will hate you for life for knot telling him what happens to us Fishermam.
The cost.
The excitement.
The never ending quiver.
Click to expand...

thanks!
I'm still getting a good deal of satisfaction out of it.
especially with a cold beer whilst reflecting
cheers!
Upvote 0

Way to go! Hooking up another brother to this addicting sport!!!!

easy . . . she's a tuff cook and it's "international women's day"
she'd probably lay you out with the swipe of a spatula
Reactions: stormwater
Upvote 0

cool! stoked for you. It’s enjoyable to teach others.

Whenever somebody tells me they have experience fishing I always inquire a bit more. Usually I say “oh what kind of fishing do you do?” Anytime the response is “deep sea fishing” I know that means they have been on a sport boat once in their life 10 years ago.
Reactions: Mike in Murrieta, Kayfishy and tom fowlks
Upvote 0

805mike said:
cool! stoked for you. It’s enjoyable to teach others.

Whenever somebody tells me they have experience fishing I always inquire a bit more. Usually I say “oh what kind of fishing do you do?” Anytime the response is “deep sea fishing” I know that means they have been on a sport boat once in their life 10 years ago.
Click to expand...

yeah, that was about the size of it
known him long enuf to know . . .
especially when he asked me about how the collars were on my wahoo
Reactions: Mike in Murrieta
Upvote 0

tom fowlks said:
easy . . . she's a tuff cook and it's "international women's day"
she'd probably lay you out with the swipe of a spatula
Click to expand...

I wasn’t talking about the cook

stormwater said:
I wasn’t talking about the cook

HAH!!
yeah, my buddy owes me one, that's for sure
I owe you a beer!
Reactions: stormwater
Upvote 0

My friends are always saying they want to come deep sea fishing with me someday. I usually stop trying to explain to them that it's not deep sea fishing just before their eyes glaze over and their heads implode. Whenever I ask any of them if they want join me on a trip they always have some lame excuse.
I am envious of your ability to trick one of your friends Into having a good time.
Reactions: wildbunch and tom fowlks
Upvote 0

tom fowlks said:
HAH!!
yeah, my buddy owes me one, that's for sure
I owe you a beer!
Click to expand...

stormwater said:
hahah. You’re the man. Was just playing around. Glad you didn’t take it too seriously. Tight lines amigo
Click to expand...

It caught me off guard at first, but I laughed when you replied “wasn’t talking about the cook”
She’s a cutie!
Tight lines to you too!!
Upvote 0

Awesome report and kudos to getting your buddy hooked. Have a ON scheduled on the Mirage in Mid April. Hopefully the WSB will cooperate. Sounds like a solid operation.
Reactions: tom fowlks and jer dog
Upvote 0

chilidip said:
Awesome report and kudos to getting your buddy hooked. Have a ON scheduled on the Mirage in Mid April. Hopefully the WSB will cooperate. Sounds like a solid operation.
Click to expand...

oh man! hope you get on the WSB!
I'll get on that boat again, that's for sure!
Reactions: chilidip
Upvote 0

tom fowlks said:
oh man! hope you get on the WSB!
I'll get on that boat again, that's for sure!
Click to expand...

Yeah, we’re going on the 16th fishing the 17th. Hopefully they have some live squid and bass want to play. Fingers crossed!
Reactions: tom fowlks
Upvote 0

Good Karma coming to you for hooking up your Bro to our addiction. Mirage is an awesome operation & Marissa rocks. WTG Bro !

What up guys?!!!!
Tom, thanks for the report and good on ya for hooking ur boy up. I am actually doing the same thing on The Mirage this weekend leaving Saturday and fishing Sunday, really hoping for the squid to float and the Cbass to come out and play.

I saw that you guys fished up to 300 feet, are you or is anybody else aware if they fish any deeper? I am getting my rigs together and wondering if I should bring one of my old school Rockcod rigs with the broom stick and big handle if they drop deeper than the 300. For sure gonna bring some jigs to toss off the bow.

This will be my first trip up there, usually fish OC and SD, so any and all tips and suggestions are welcome. Also, we will be getting there a few hours early so if anyone knows a good chill place for grub and a cocktail my ears are for sure open.

Sorry to Jack your post but figured this group would know.

thanks y’all and have a good, safe season.

Offshore Teach a man to fish