I just got back from a mini-Long Range 3-day on the Polaris Supreme, Nov. 20-23. I had booked this trip a full year ago, so had been looking forward to it for a long time. I have to book a long time ahead so that I can get the extra-long bunk that I need. I was hoping that the yellowfin tuna would be around, because I can play with them all day long and not hurt myself. But NO, they are still way down south, and there are still a huge quantity of fat bluefin tuna roaming around the waters south-west of San Clemente Island, so that is where we went.


I really like the way that the Polaris Supreme loads the boat. You sign in at their table just outside of the Seaforth Landing office, and your tag number is the order that you booked the trip. I was Number 2, and my requested bunk had been reserved when I had booked the trip a year ago. So two numbers to each dock cart, cones are set out alongside the carts, and then a crewman pushes the cart and takes two people at a time alongside the boat. Your gear gets handed up over the rail and you get to put your tackle box wherever you desire, and there are at least four spaces of rod-holders under each number on the side of the galley, odd numbers on the port side and even numbers on the right side. Then you take your duffle bag or backpack (or both) into your stateroom.

The boat was all gassed-up and fully baited with nice sardines, so at the 10am start time we left the dock and headed south-west and then west and started looking around when we got below San Clemente Island. It turned out that we spent the whole trip looking around between the West Butterfly and the Cortez Bank. The sea was pretty calm overall, some smallish waves but no whitecaps. I don't think that we saw any real surface life at all, no fish on the surface, no bird gatherings, it was a steady sonar hunt.

And the bluefin were there, for sure. Once we got into the right zone, about every half-hour we would be informed that a school was under us, almost always "two forty to 300 feet" and down would go the lures. Sometimes one or two would bite, sometimes a little flurry of action, often they would scatter and we would get nothing. But the hunt was constant and relentless, and after darkness fell it began to be more successful. I had rigged up a 300 gram knife lure that had glow paint on it, but as I was using my UV flashlight to fire it up a deckhand came over and advised me that non-glowing lures were getting bit better lately. "It seems to chase them away, not attract them." Sooo, I always try to listen to the crew. Even though I have caught a bunch of tuna during the past several years on flatfalls and knife jigs that glowed, I am always going to listen to someone who is out there constantly.

It's now about 9pm or so on Sunday night, the first night of the trip. I'm still using the 300 gram knife jig, just not making it glow. It has two strong assist hooks on the top and a 5/0 ST-66 treble hook on the bottom, and three feet of 200# mono leader to 80# fluoro over 80# braid, with the depths marked. I drop down to 300 feet, wind up rapidly twenty turns, and drop back down. And repeat. And repeat. I feel a bump but don't connect. And repeat the drop. Then I feel a bump and slam the lever forward to strike and ZOOM the line starts ripping off. "Fresh One!"

This fish is tough! I get line, he takes it back. He moves me all around the drifting boat, in and out of a half-dozen tangles. I'm getting tired, my left had is injured from a fall I took five days before and I can't make a fist so pulling is very hard. I pass-off to a deckhand for five minutes to rest and then resume the fight. This happens several times until the fight has gone on for about 50 minutes, the fish is now at deep color and looks to be a good one, maybe a hundred pounds. I see the line NOT going into his mouth, but high on his left side, where the treble hook has snagged him, above and in back of the left fin. I get him up to about ten feet beyond the gaff's reach and he freaks out at the boat looming over him and rips free, leaving my lure with a patch of skin on the treble. Rats!

Well, there are now about two dozen good fish on the boat, and none of them are wearing my tag. The quality of the fish that we were finding was just excellent. I think that maybe ten fish were caught in the whole three days that were just barely under forty pounds, the majority were in the sixty pound bracket, and at least a dozen were 100 to 120 pounds. I had brought four rigs, 30-40-80-80, and only used the two heaviest because I could see what was coming aboard.

There were 24 fishermen on this open trip, and only a couple were new to tuna fishing. The cooperation was excellent, everyone tried to be helpful, and it quickly became apparent that a half-dozen of the people were serious tuna killing machines. When they saw that I was hampered by my injured left hand and as-usual wobbly legs (I'm 76) I was offered a hand-off fish twice, and was glad of it. I've done that dozens of times over the decades, and it was nice to have the karma come around my way.

It was interesting, but really tiring fishing. We didn't go much more than an hour during the entire three days that we were anywhere near the zone without the boat stopping on a sonar school and an intense effort was made. Lots of chum went into the water, and sometimes the school would come up for a little time and cause chaos and then sink away, and we would go back onto the hunt. ALL NIGHT LONG. ALL DAY LONG. And repeat. I was getting a couple of hours sleep, and then back into the boots and back onto the rail. This is really a lot of fun when you are younger and bulletproof, but I have to admit that at 76 it began to be really hard. And I wasn't the only one feeling the strain. On our last night as we began heading back to Mission Bay, and most of us had already broken down our tackle, another big school came onto the sonar and another stop was made, and the dozen guys who had the strength to keep fishing boated almost twenty nice bluefin in the last hour that the boat had to spend possibly fishing.

The boat ended up with 118 bluefin tuna for the 24 of us, not full 3-day limits but certainly a nice load of fish! And these weren't schoolie tuna, these were good solid break-your-heart models. We had a lot of casualties to get those 118 into the RSW. Every fish got spiked and gilled and gutted. I was very impressed with the intense effort that everyone on the crew made to make sure that we all had the best time possible during the trip. This was my second trip on the Polaris Supreme, and hopefully I will be able to ride her again. 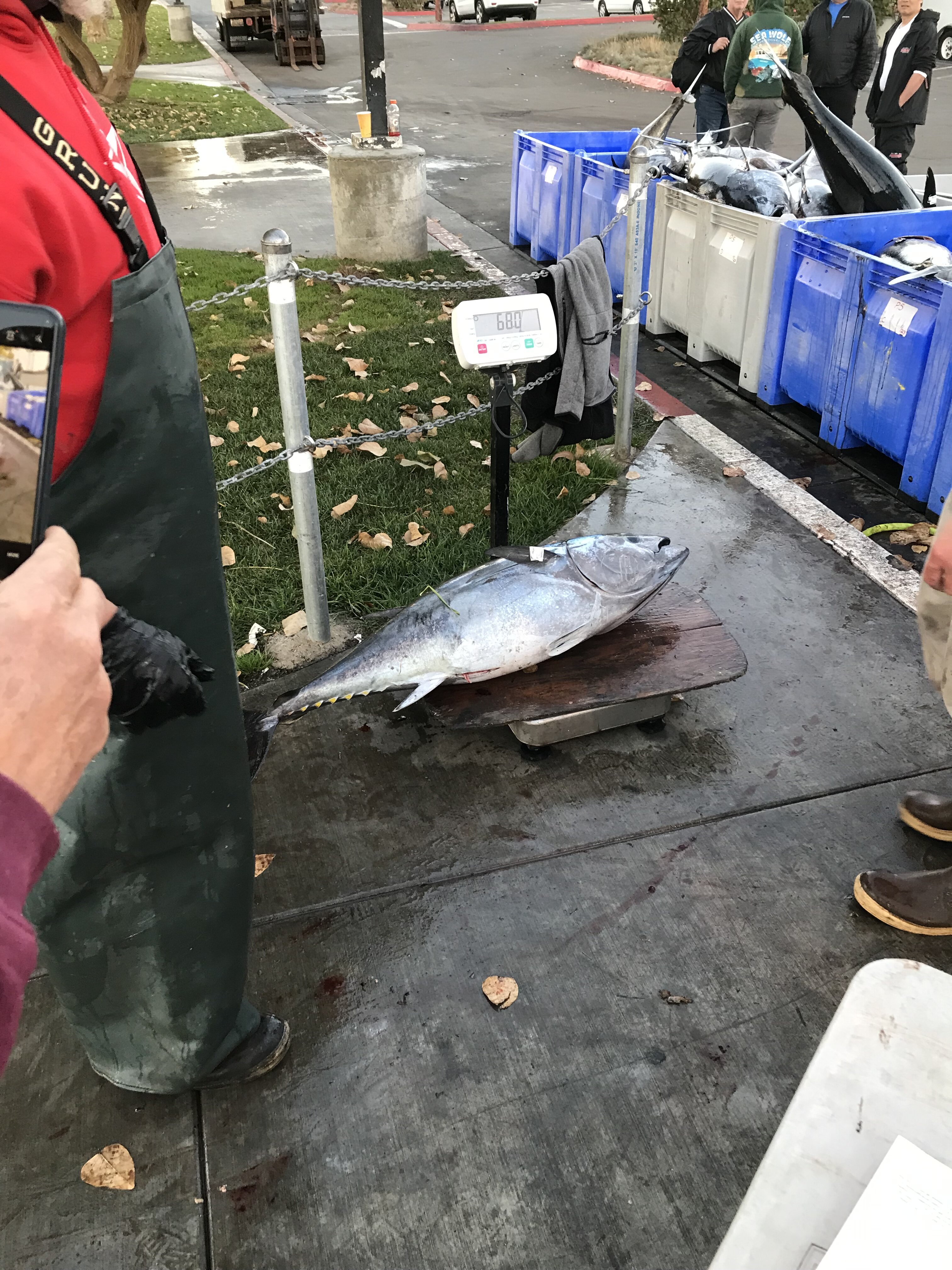 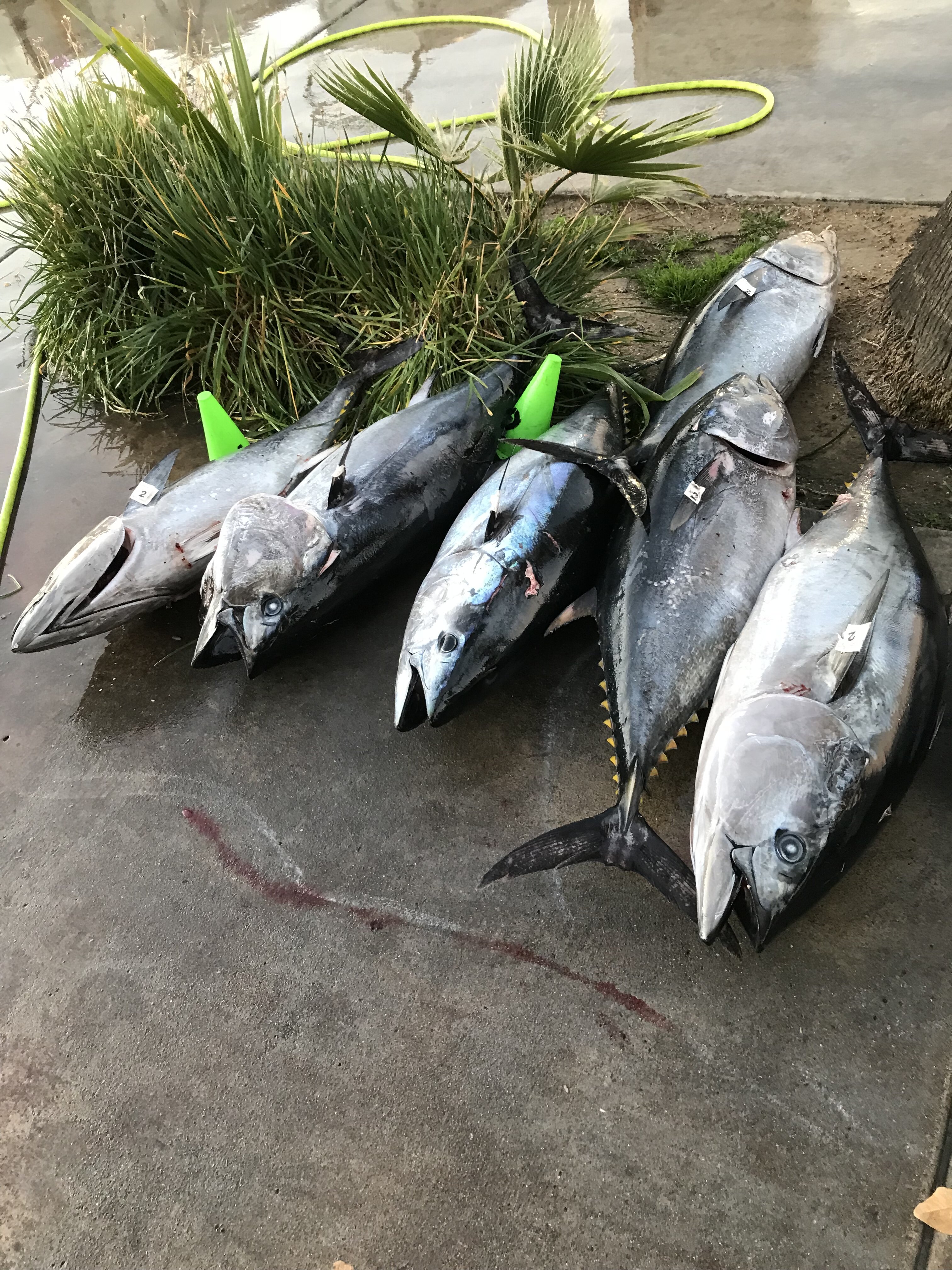 Nice to see Tommy got the boat into good hands, love that boat
Thanks for the report!
Reactions: Noah & Scoot, surfgoose and Tunahead
Upvote 0

Nice!
Did you get the upper bunk of Room 7? That thing is massive. I love that bunk!
Reactions: surfgoose
Upvote 0

GREAT report/read and NICE fish for some.
Yeah also at 76 almost 77, 3 days of that up and down little sleep not for me. Been there, done that for years. Glad you got out again!
HAPPY THANKSGIVING to you and your family.
Reactions: surfgoose
Upvote 0

RockHopperNCKA said:
Nice!
Did you get the upper bunk of Room 7? That thing is massive. I love that bunk!
Click to expand...

There are a lot of excellent bunks on that boat. I signed up early so that I could grab the lower bunk on Stateroom #1, which is on the deck level. I try hard to avoid ladders nowadays.
Reactions: butcherboy
Upvote 0

Designed for Long Range multi day trips, the boat has head/shower, down with the staterooms in the bow section and aft section. Nice for waking up and taking a pee middle of the night. Only one head, no shower, on the deck level in the galley. Creates lots of space for seating for dining. A unique design for sure, with no portagee bridge and controls on the back end of the upper deck, entrance to the bridge from the rear, too.
Last edited: Nov 29, 2022
Toggle signature
Longer Rods, Longer Boats, Longer Trips, Lighter Loads
Reactions: surfgoose
Upvote 0

Wow, what a nice report of a grueling hunt!
Reactions: surfgoose
Upvote 0

Bluefin fishing is definitely brutal. The fish are generally on the large side, the hours are long and my calendar reading is old. It's not as easy at 84 as it was when I was 40 but I'm not quite ready to give up. Got one more three day this year and a full schedule for next year. Not ready to play bingo yet.
Toggle signature
Yale Combs

Professor said:
Bluefin fishing is definitely brutal. The fish are generally on the large side, the hours are long and my calendar reading is old. It's not as easy at 84 as it was when I was 40 but I'm not quite ready to give up. Got one more three day this year and a full schedule for next year. Not ready to play bingo yet.
Click to expand...

I’m of another school, nighttime fishing for Bluefin is just not my thing. I tried to like it, tried to “get into it” but, no thanks. I’m not ready to play bingo either. At the age of only 74 next May, I won’t be taking any trips shorter than a 7-8 day. If we end up finishing off one of the trips by heading north, I’m OK with that, but probably won’t be up late. I like fishing with the sun.
Toggle signature
Longer Rods, Longer Boats, Longer Trips, Lighter Loads
Reactions: COSDoug, Cubeye, surfgoose and 1 other person
Upvote 0
Show hidden low quality content