Before we headed out on our 19th annual "Tuna Runners" on the INDEPENDENCE, I had to do some preparations.
Reports were that the bluefin bite was off and on, mostly off.
And the weather forecast was not promising for the entire duration of our upcoming trip.

Also, deep dropping jigs for giants bluefin was all new to me.
So, I acquired a Phenix rail rod,
a MK30II SEA spooled with 130 braid,
and a bunch of these 300-400 gr JIGMAN knife jigs that I rigged with 300# split rigs,
200# leader, 300# swivel, super Mutu on the bottom and BKK assist hooks on the top.
I also marked my line in 50' increments as some suggested.
I was only going by what I've read on reports and seen on videos.
Taking that into a real time application was going be a different matter.
Cross my fingers and pray. 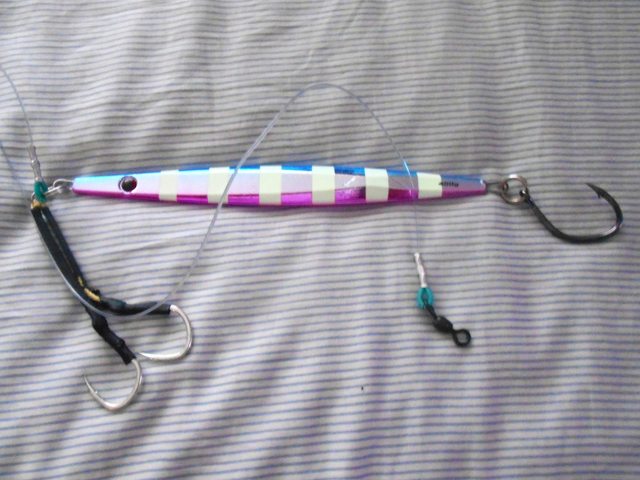 After we all boarded and unloaded our gear,
I sat down briefly with Capt. Brian about the tentative gameplan for the next few days.
We both agreed that we would spend the first couple days looking for the big bluefin since other boats had reported a rebite.
Then we would maybe head south and paddy hop for yellows, dorado, and yellowfin. Sounded good to me.

Soon following the brief seminar by the captain in the salon, we quickly dispersed the give aways to all the passengers.
A pair of Jims (Jim and Jim) won the grand prizes: a Calstar Grafighter and an Okuma 2sp reel. Congrats guys! 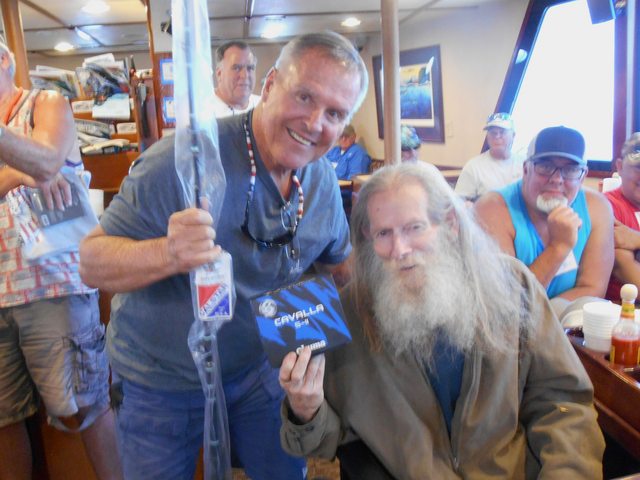 After we loaded bait at the receiver,
the nose of the Indy pointed west past the Point and into the slop of the nasty trough.
Because not many passenger fishing vessels can handle undesirable weather conditions like the Indy,
we poured wine and delighted in our first night's dinner of prime rib in total comfort. 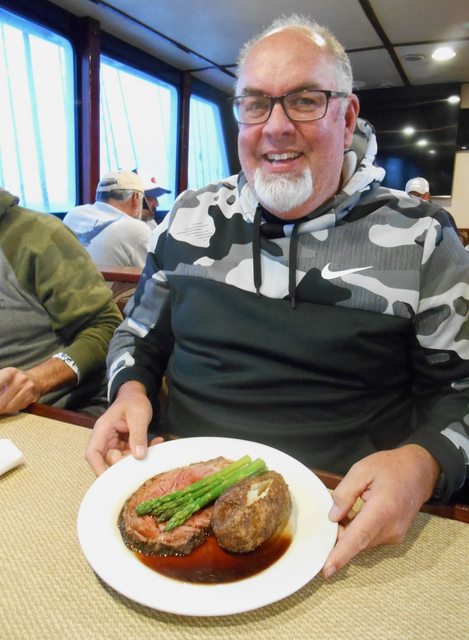 We started looking in the dark about 10:00 pm.
And after stopping on several meter marks, Patrick landed the first triple digit.
More to come... 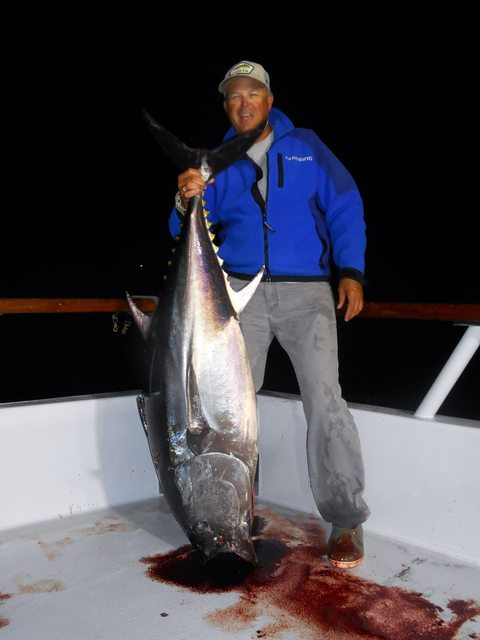 Long time passenger Mike quickly subdued this brute with his well-honed techniques.
We would make many stops that night on many meter marks.
The window of opportunity was there.
And if you stayed up and put your time at the rail, you were rewarded.
But those chances soon dwindled at the night wore on. 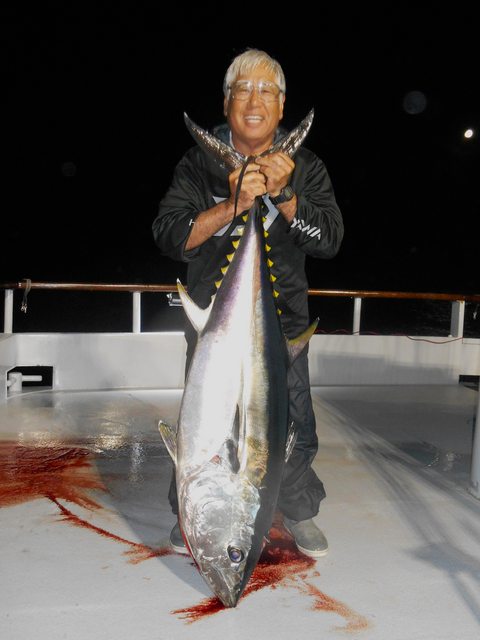 This young lad, who is about to gorge on a triple helping of lasagna, came on the trip by himself.
We soon adopted him, and he became our mascot.
He would more than demonstrate his experience as a skilled angler. 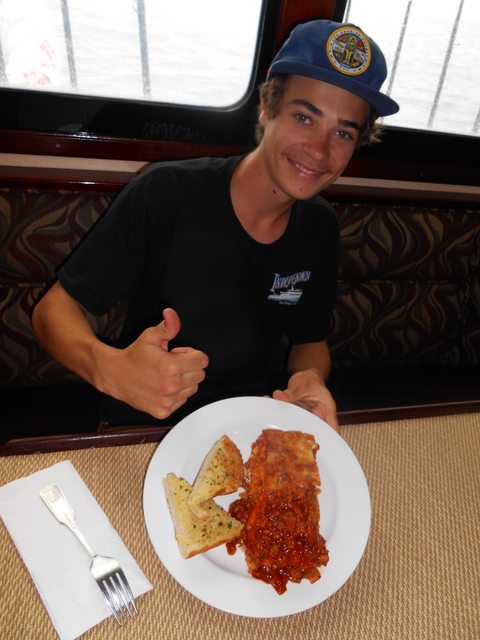 During our searches in the daytime,
we encountered tons and tons of bluefin-
frothing, foaming, breezing, air born-
having a good old time chasing micro baits.
Unfortunately, we would only land 1 on bait. Eli was the lucky angler. 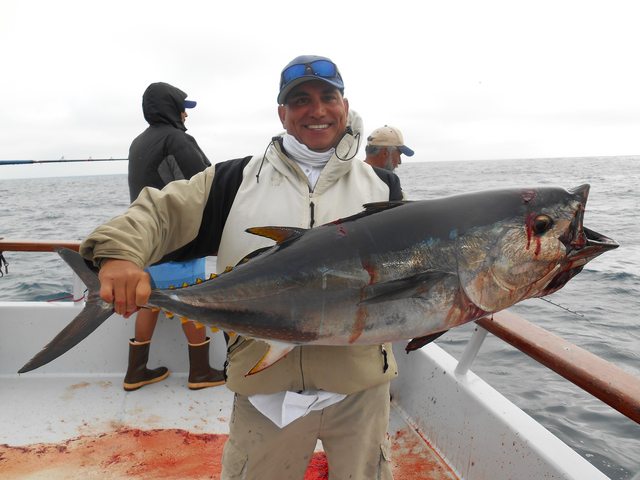 The 2nd fish bit the slow pitch jig.
Danny's in for a lot of hurt! 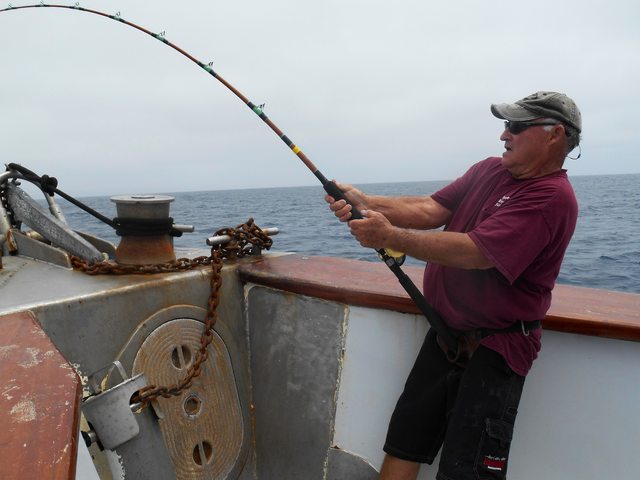 After about an hour and a half of back-and-forth struggle on light line/ gear,
the 150 lber was finally subdued. What a battle! 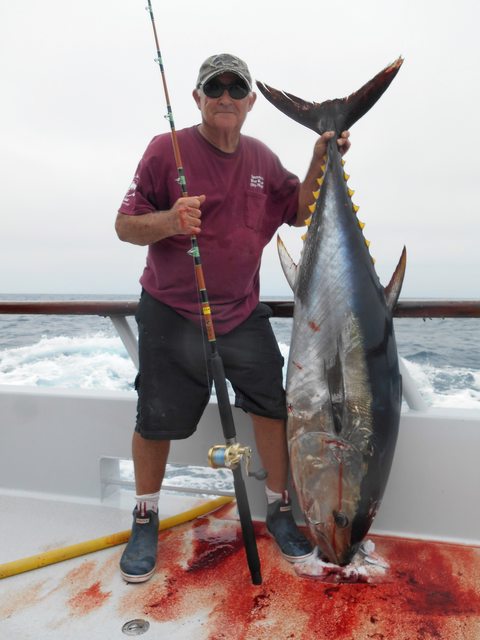 He had tied on one of the giveaway jigs: 200 gr Fish Lab Carnada. 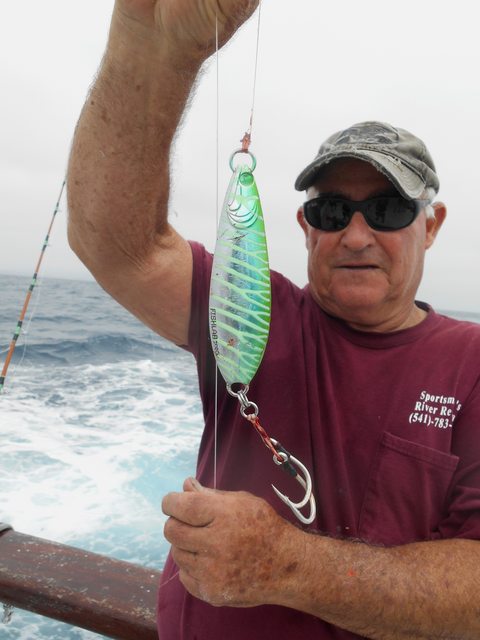 Time to take a load off and have dinner.
Roasted half chicken in some kind of cream sauce. Delish! 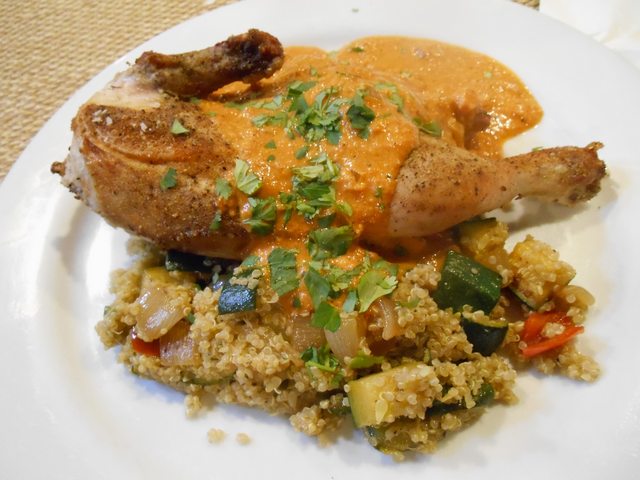 Second night rolled around for another round of deep dropping up to 400'.
My old buddy Fernando is always posing with big fish. Why? Talent... 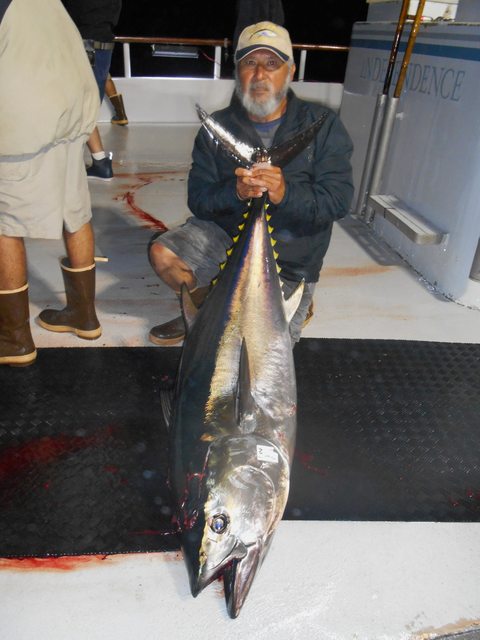 After several stops on the meter marks,
we finally get into a real bite that turned into a ripper of straight big ones! 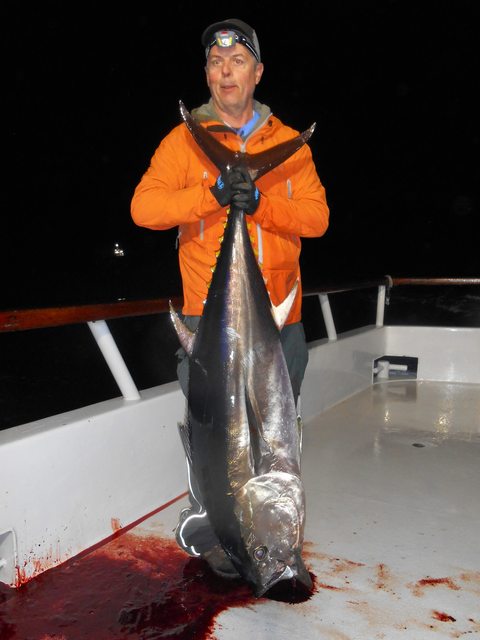 If you worked your jig in the announced depth,
your chances were high- very high.
Huge smiles for Dan and Jim! 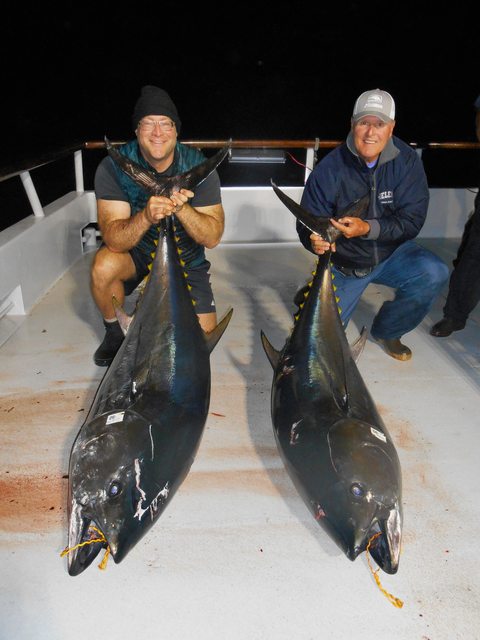 It was around midnight, and it became full speed.
My buddy/roommate Joe and I had a little difficulty lifting ours for a photo. Weak! 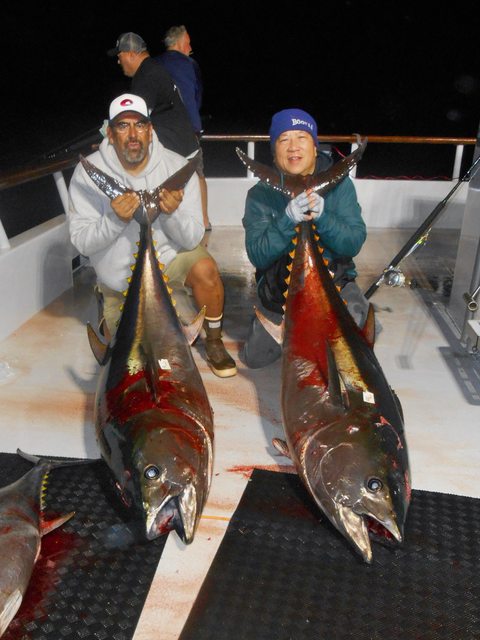 Here's the young gun Tyler with his 161# JUMBO that had surpassed his previous PB.
SKILLS!
Yes, it weighs more than him... soaking wet. 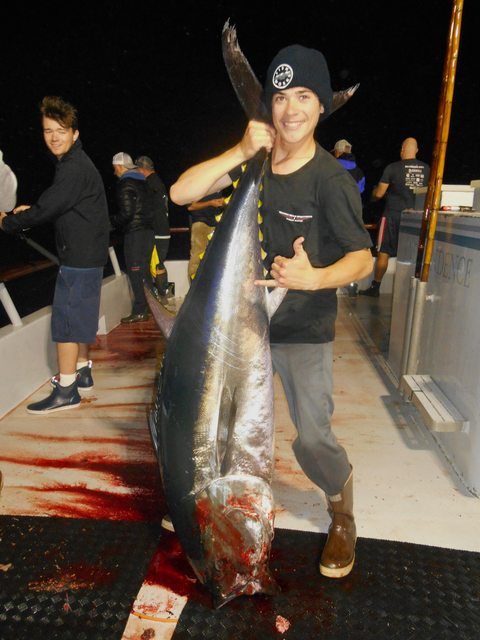 This stop would last about 2.5 hrs.
And in that time, we managed 42 with over half going over the triple digits!
Absolutely unbelievable!
After we regrouped and kept looking, Capt Brian stopped on a mark that filled the screen from 150-400'.
That's 250' of straight cattle! But we couldn't get them to bite.
They had completely shut off. Time to lick our wounds.
There were some obvious heartbreaks on legit cows.


The next day we decide to do something tamer like paddy hop.
Discussing it with the capt, I told him that many passengers didn't get a bluefin
and maybe we should get some fish in the bags.
We both agreed. So, south we went.
Found some biters! 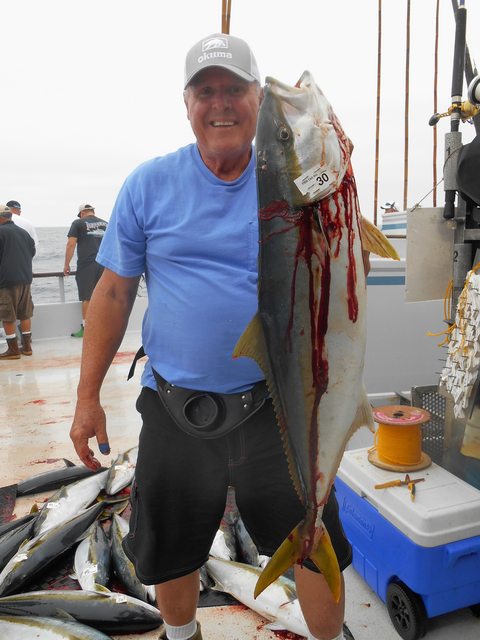 Long time passenger on our trip Lorraine, has many years of experience under her belt. She likes to pull hard. 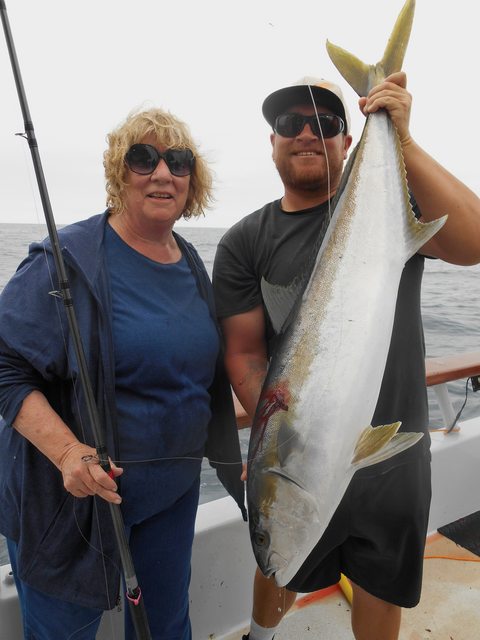 Tell me. Does any other boat serve elk burger?
Holy crap this was good!
The new Indy "antler and cheese" combo. 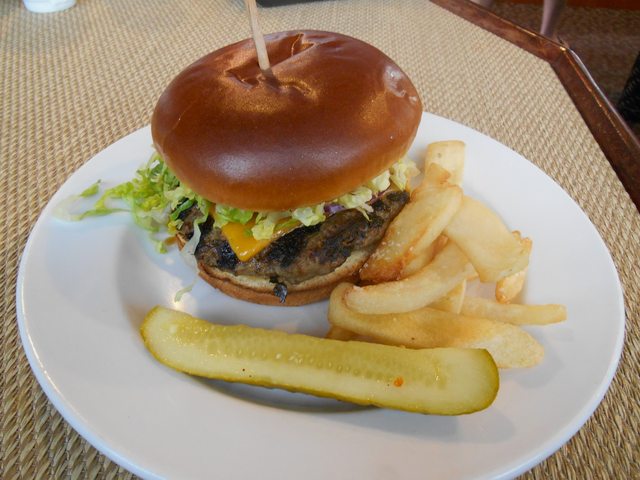 And for the evening, one of my faves... charbroiled pork chop in mushroom gravy. My mouth is watering again! 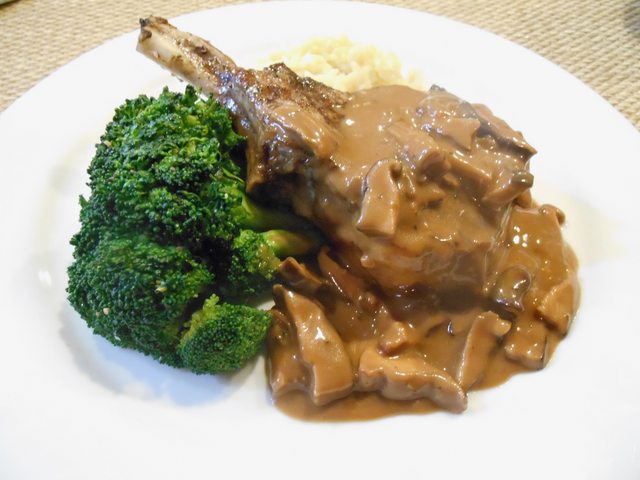 Topped off with Bananas Indy. 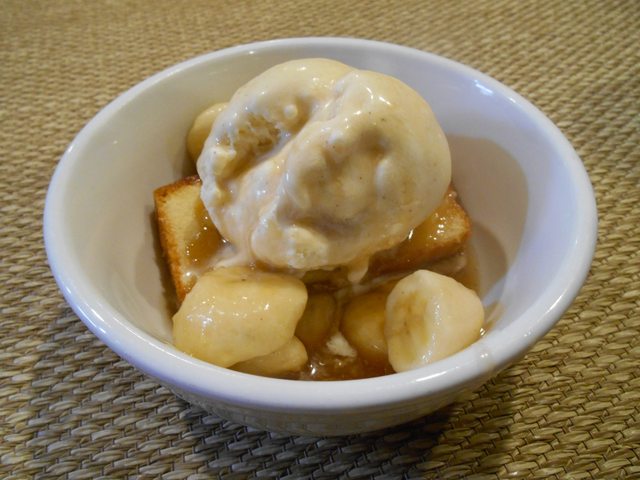 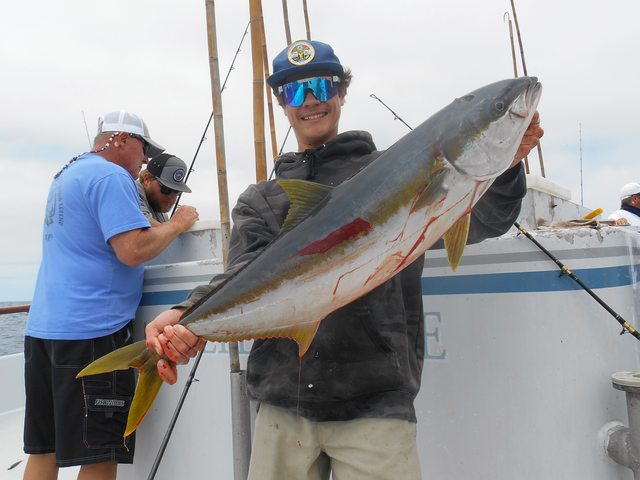 With dodos in the mix. 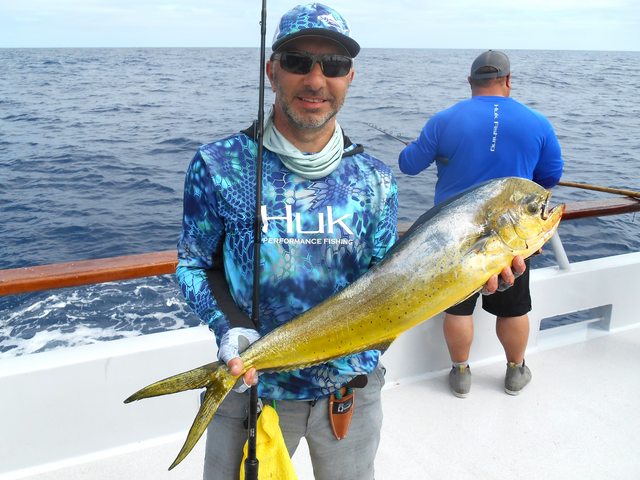 I took my time with this lunch. Chicken fajitas. 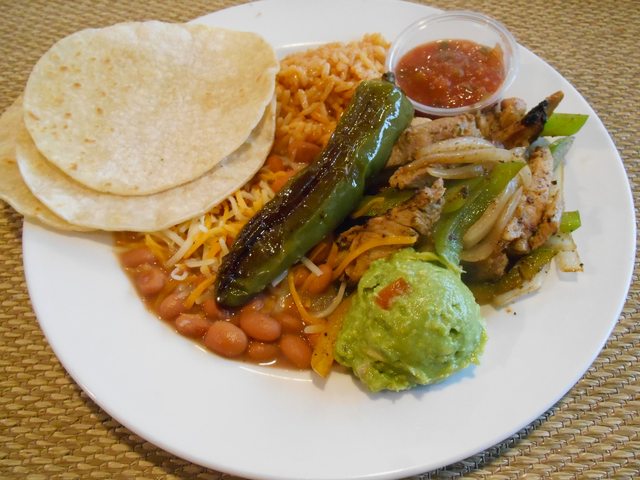 And our last dinner, charbroiled New York and asparagus. 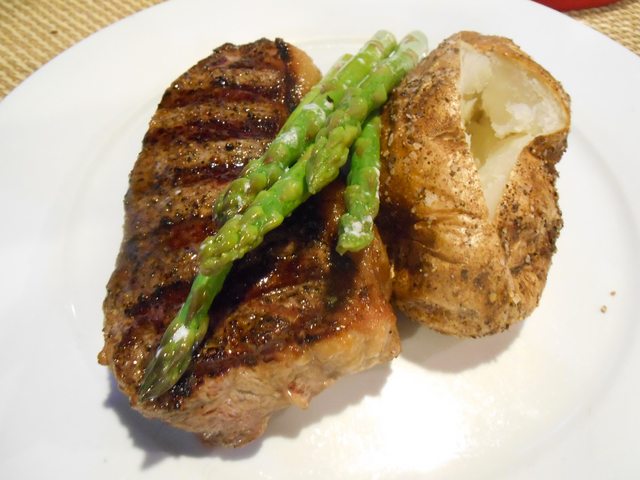 Three very close friends from different parts of the country and varying backgrounds.
Fishing just brings people together. I guess food does too. 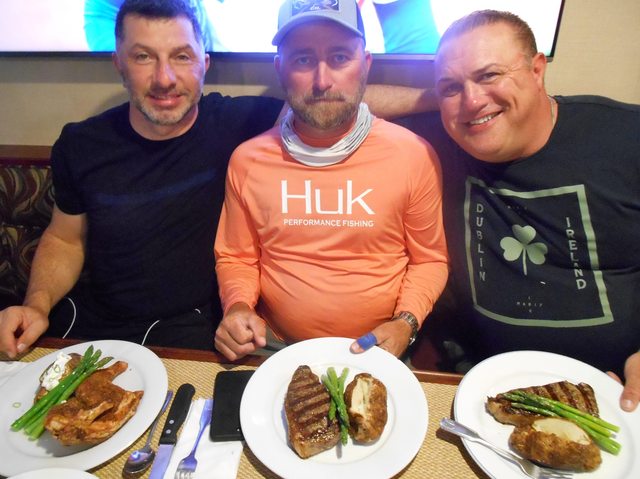 And this concoction.
One bite and I almost passed out from flavor overload! 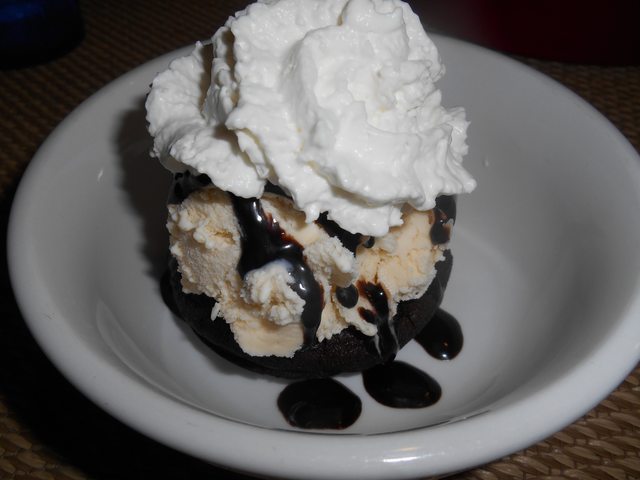 As we returned to the dock, I just can't shake that crazy night of Bluefin fishing.
Outstanding, amazing, epic, incredible...
are all adjectives that barely describe what we experienced that night.
Some would call it organized chaos. It is a memory forever etched in my brain.
Luckily, I recorded it on video in case I go senile. 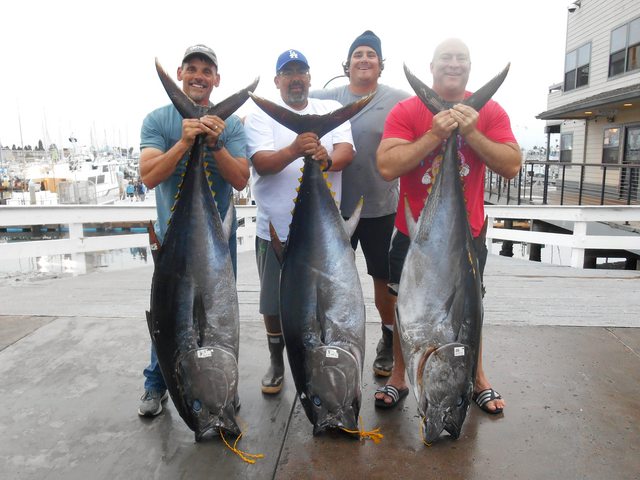 Yes, the fishing was great.
But I have to say that without all of us getting along and being courteous to one another,
it wouldn't been half as fun.
And I can't give enough praise to Capt Brian and the entire professional crew of the Independence.
They were on the spot for any issue or hook up.
Not just an incredible trip, but the Indy is a top tier operation.


See ya on the next one!
-Sherm
charter master 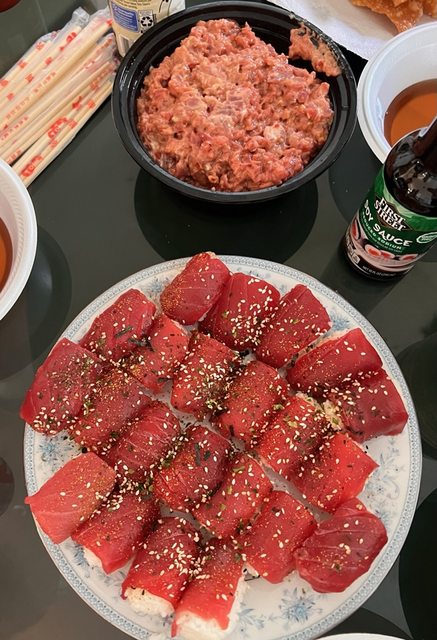 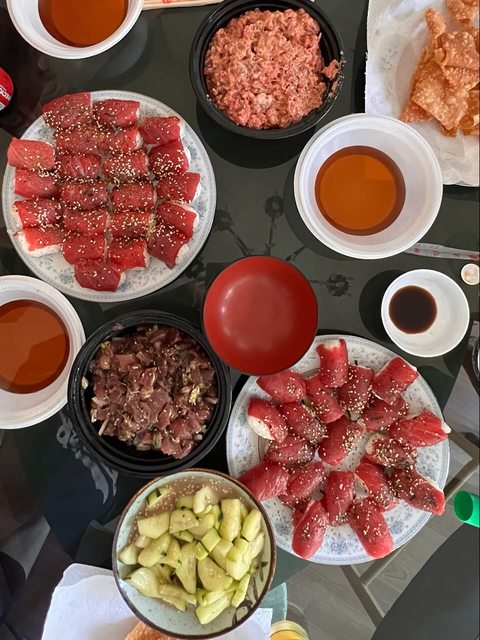 Like how you guys adopted the kid... and ya gave him 'ish too. Can you go over to the light so we can get some better footage? Are you 18 or 80?

Thanks for taking us along for the ride.
Reactions: bajapaddyhopper
Upvote 0

Nice. Thanks for the report and the video.
Reactions: bajapaddyhopper
Upvote 0

What a trip!
Reactions: bajapaddyhopper
Upvote 0

Great report/pics Sherm. NICE FISH everyone.
Glad I just had only a salad for lunch! All those
food pics started to rattle my A1C again.

Great report. Thanks so much for taking the time to share with us

. I assume Ed was running the galley. He works magic in there for sure!!!
Upvote 0

Talk about envious. When I was 18, I was still going on 1/2 day boats and twilight trips on the Matt Walsh and Sport King. If I did a 3/4 day I really doing something. What a nice write up and read!!
Reactions: pacificscout and Tom123
Upvote 0