Wow what a trip. Lots of personal best on some beastly fish. This is a 20+ year charger on memorial day and I've been lucky enough to go with this crew a few times.

Only game in town right now.. is the big boys. Capt Mark told use that the bite had been at night and that we should be prepared with 100# gear and either Flat Falls (caught both mine on Flatfalls on the drop) or the sinker rig.

Jackpot fish below was more the crew than me. I hooked and stayed on it for 20-30 minutes and tapped out. I knew it was big and told Cody am not going to kill myself and the ENTIRE crew took a whack at it. They taped out to 192 and 185 When we weighed them on short without kills and blead out they were 164.

So, this was personal best for me. Been fishing out of San Diego for 50 years and never one over 100. so to get 2 about an hour apart. Was a trip of a lifetime for me. Feel bad for Brad and Chuck who had to cancel and glad I was able to fill the last spot.

Lady luck was working for me, as I got on from the waiting list last minute and 8 hours later catch my personal best. No bad Than at daybreak get the Jack Pot fish. There was an equal sized fish if not bigger Day 2. His tapped out a little less than mine, but his weighed more on scale.

But this one was an absolute beast, we had to the boat 5+ time and it just turned its head and took 100yrds I cannot take credit for the fish, I hooked it.. but it kicked the behinds off of Cody, Mitch, Charlie and the Capitan. I'd take my 5 min every once in a while.

After 2 hours. Capt Mark said give me a whack at it, he thought it was tackle and soon found out the rod and reel/drags were all fine.
Total fight time was just under 3 hours.

We put 28 on the deck and more than half of those were 100# + and for every one that had smiles the Bluefin won the war and we must have had 50 breakoffs, Several after 2+ hour fights. On one of the last stops we went 3-12 and the Capt was not amused :-( If you've ever fished with Mark.. well ya know how he is.

Just about any color on Flat Falls. Obviously you one that glows in the dark for the night drops. 4 oz sinker rigs seemed to get bit the most. Problem with that is it was 40-60# test and smaller reels. You need 80-100# 2 speed is a must.

I cant say enough good things about this crew. They have been together 5+ years and they make it fun and they are darn good.

Thanks to Capt Mark, Charlie, Mitch and Cody and the new cook Will.
Great crew and great boat to fish. 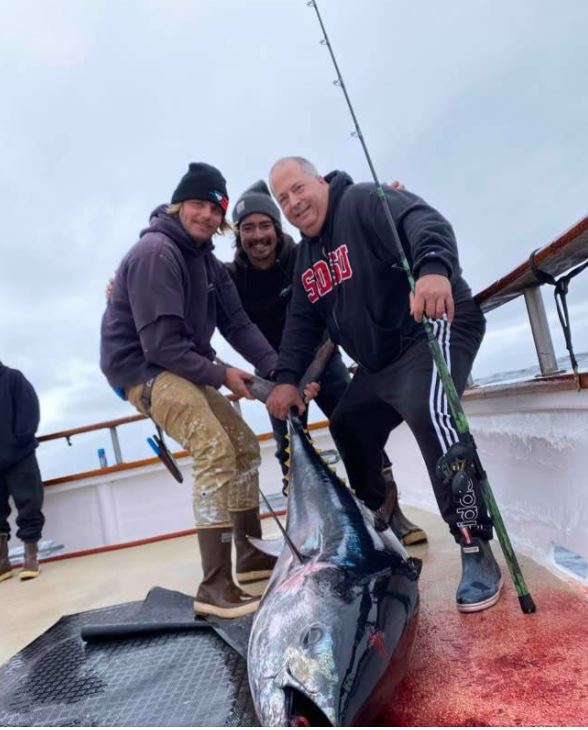 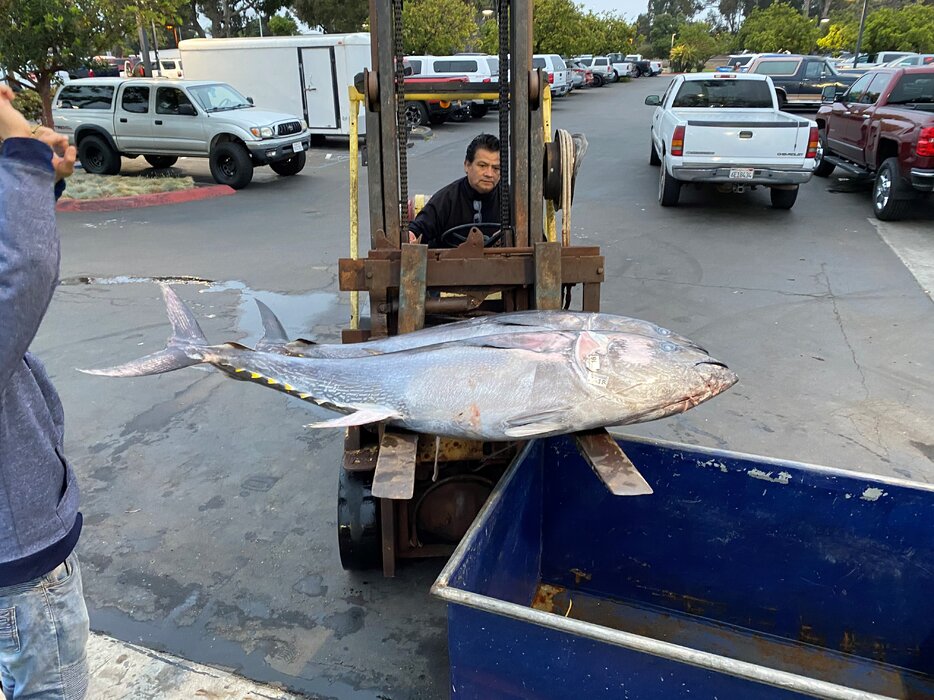 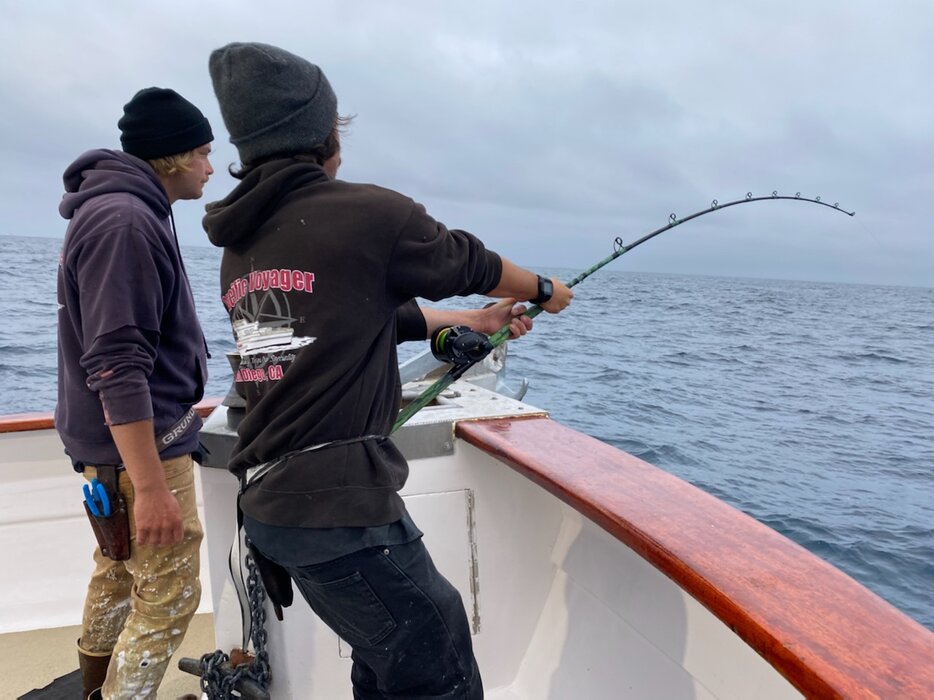 Was absolutely shocked at how well the rod worked. This was a build I put together and wasn't sure if I was going to sell it or keep it.
Varamac VC-5- 7' 30-60 We had it on almost max drag of 30#'s and it never bottomed out. The whole crew loved it. 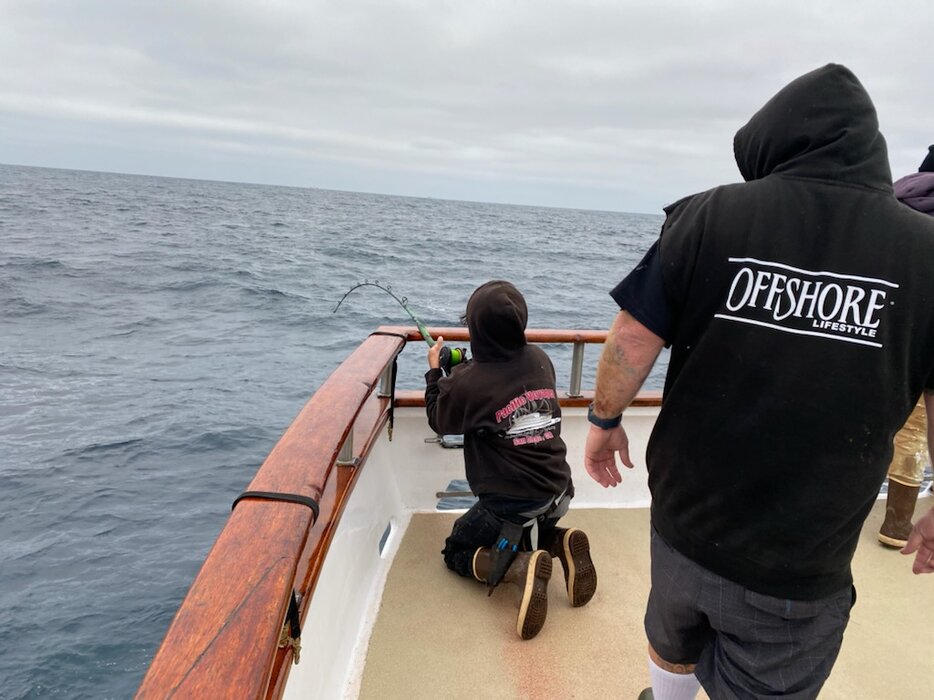 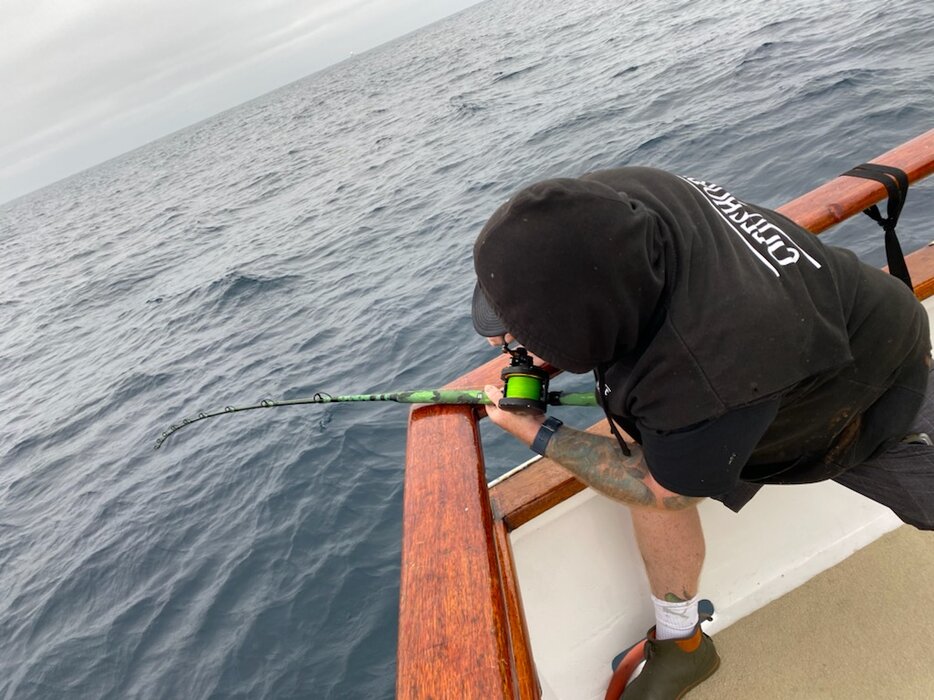 Wow. Congrats awesome omg all of the above. Wait list to that trip !!!!
Reactions: Tuna Dreamer
Upvote 0

That fish was angry as hell! Good fishing with ya hope to join you guys next year
Reactions: Saponi73, Tuna Dreamer, Noah & Scoot and 2 others
Upvote 0

MattFred1414 said:
That fish was angry as hell! Good fishing with ya hope to join you guys next year
Click to expand...

Likewise Matt It so nice to fish when there is cooperation and most people know each other vs 30+ on an overnight boat. night and day difference.
PS my fish tapped out bigger! I dont trust no damn scale on grass


But who cares.. when they have to lift your two fish with a forklift
Reactions: Saponi73, Tuna Dreamer, Peg North and 1 other person
Upvote 0
P

What reel, lb spectra and lb leader were you using?
Upvote 0

Yep, lots of big fish caught... and lost! That fish was pissed off and didn’t want to die! I was 1 out of three, with a few bumps on the FF. The 1 was about 50#, caught on a 40# sinker rig with a 6 oz sinker and a 2/0 hook.
Toggle signature
When I was your age, Pluto was a planet.
Reactions: One_Leg, Tuna Dreamer, Shon and 2 others
Upvote 0

peter lupo said:
What reel, lb spectra and lb leader were you using?
Click to expand...

tgorman said:
Likewise Matt It so nice to fish when there is cooperation and most people know each other vs 30+ on an overnight boat. night and day difference.
PS my fish tapped out bigger! I dont trust no damn scale on grass


But who cares.. when they have to lift your two fish with a forklift
Click to expand...

I was surprised when my bigger model weighed 106 bled. I thought it was in the 90s.
Reactions: fishin_kid, Tuna Dreamer and Noah & Scoot
Upvote 0

Was a fun trip "That guy" was absent unless it was me !!. Watching those guys with the TLD's rented from Seaforth was painful. Mark and his crew were amazing as always.
Reactions: Tuna Dreamer, Zr1tech and bullyo
Upvote 0

Congrats on the pb. Those are some beasts
Reactions: Tuna Dreamer
Upvote 0

Great read, I've been lucky enough to fish with this crew and always have had a great trip! Congrats,
Reactions: Tuna Dreamer
Upvote 0

Wow you guys, nice report and great fish! I have always wondered what would happen if I ever hooked one of those brutes. Probably take me to the wood shed....

I was on the Top Gun 80 two years ago and hooked up, but it jumped 3 times and cap said it was a marlin. 10 minutes and the hook pulled.

Maybe one day!
Toggle signature
Go ahead, make my day...

Way to go, Todd! Amazing beasts and enjoyed the report. Makes your catch all the more special on a custom wrapped rod you built. Can't sell that stick now, great memories are attached!

Oronoz and the boyz run a tight ship for sure. (Pardon the pun) Hot local boat that flies under the radar in SD but always crushes it. One of many reasons she's hard to book or fish on. Great job on your first triple digit fishes...

I went one for seven on this trip. You name the calamity and it happened to me!

Life is good when you need a forklift to move your fish! Great report. Thanks for the pics.
Reactions: Tuna Dreamer, terryc. and tgorman
Upvote 0

bullyo said:
I went one for seven on this trip. You name the calamity and it happened to me!

Anthony....I got only good reports of fishing with you. You are welcome on my trip anytime.

Todd.....Thanks for the write up. Well done sir
Toggle signature
C-Ya
Reactions: Tuna Dreamer, bullyo, terryc. and 2 others
Upvote 0
Show hidden low quality content
You must log in or register to reply here.