Thursday evening checked temp breaks and cloro reports saw some purple colored water and a temp break near the 101, decided to head there. Headed out of SDB made a dozen Maks near channel bouys, headed out to the 101. Dodged several heavy showers and bounced quite a bit. I was surprised that I was the first boat to arrive in the area. Scouted a bit looking for marks, then I saw the SD move in, I then realized this was the area that produced BFT results the past couple days.

Dropped and slow trolled pair of healthy Maks bridled, lead by purple feathered teasers about 3 feet ahead of the live bait. After about an hour got hit but fish took the teaser which did not have a hook, and for some reason he held on to it for a while then line was cut . Then I decided to troll the bait naked, still bridled of course. Bam solid hit on the 1/0 Mustad circle hook on 40 lb floro atop 65 lb braid.

The last time I had a BFT this size I lost it at the boat after a tuff fight. I read an article that advised make short work of the BFT because they will saw through the line. I followed that advise and buttoned the drag to the max, about 25 lbs, well the 40 lb floro snapped after several attempts at gaffing. My fault I should have tired out the fish, live and learn.

This time I applied about 15-18 lbs drag, took 2 hrs to get to the boat, but I still had some strength even though my hands and arms were starting to cramp up. I started reaching for the gaff and SLAM the BFT hits the side of my boat and the fish goes apeshit, peels off a couple hundred yards in just a few seconds. I figured a sea lion must have took on the BFT for lunch, because there is no way the BFT could have had the strength to pull after two hours like he did. In any event after another 30 plus minutes I get the BFT back to color and I realize he's still intact. I'm so happy, now how to land this beast, SOLO.

I previously raised my engine so as to keep the tackle from snagging the engine so that keeps the boat orientation abeam of 2-3 ft seas with a bit of a breeze. It was very tricky and never done before but I successfully did a perfect gaff set, midway up my gaff there's a lashed SS "D" ring that was at the perfect height of my caprail where there was a pop up 6" cleat that I slid the "D" ring over, then I wrapped the "D" ring to the cleat with lashing. The fish is now secure, I started her up slide into gear at idle and proceed on AP downseas, I returned to the fish slid a slip knot over its head guided to its tail and chinched up, wala, just like they do on Wicked Tuna, fish caught. I then used a 4:1 purchase pully to bring the BFT over the rail. Done deal. 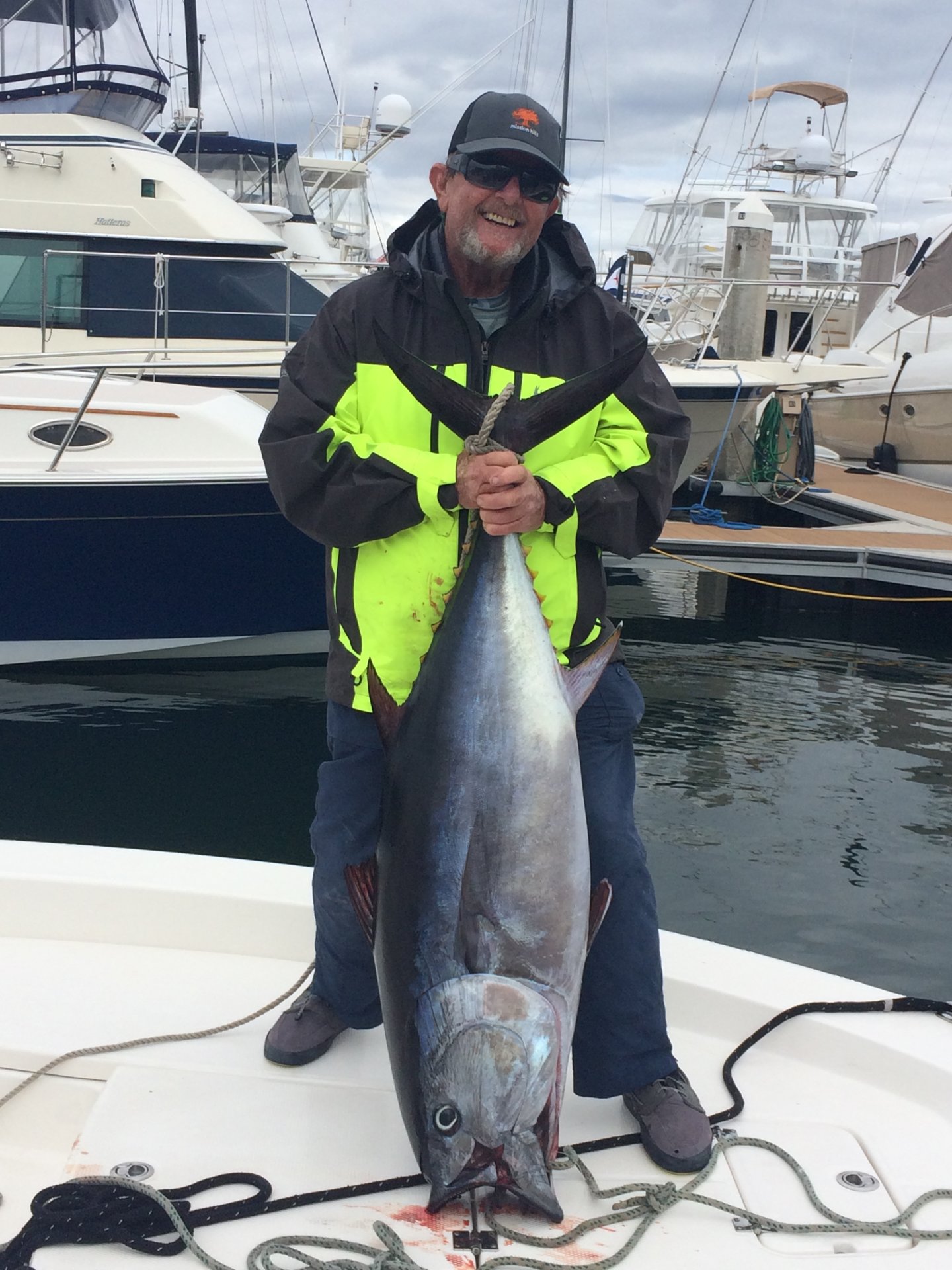 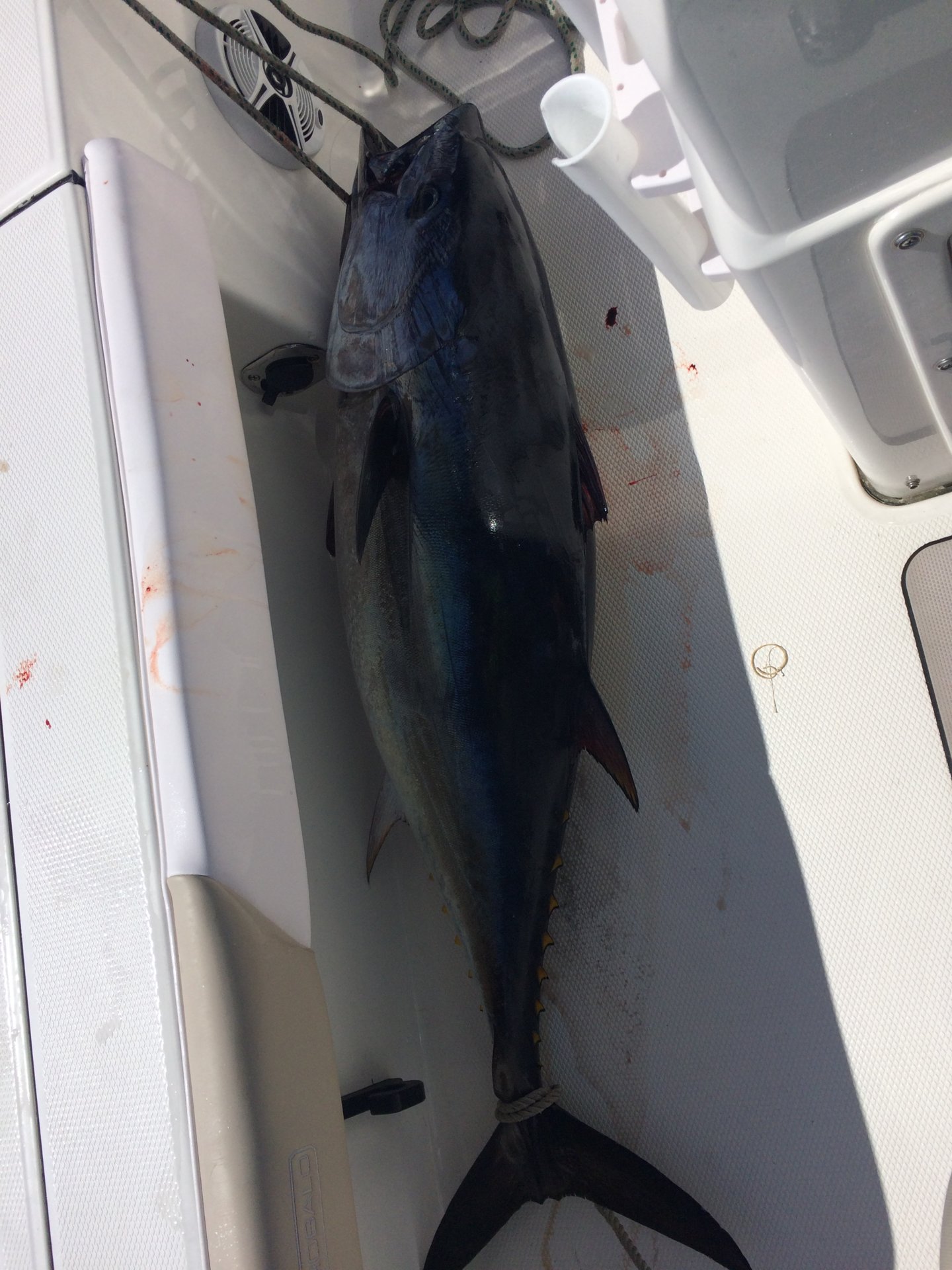 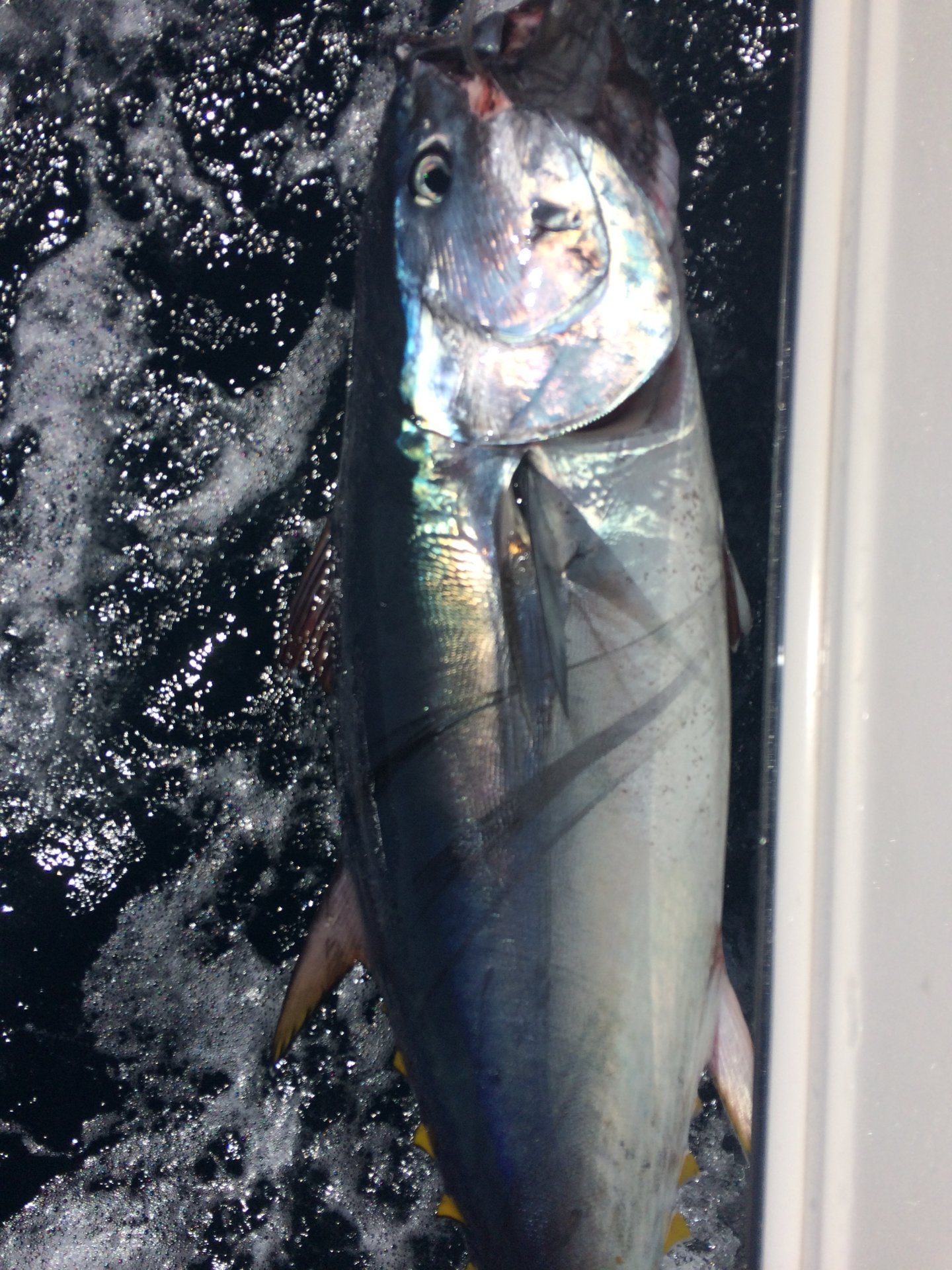 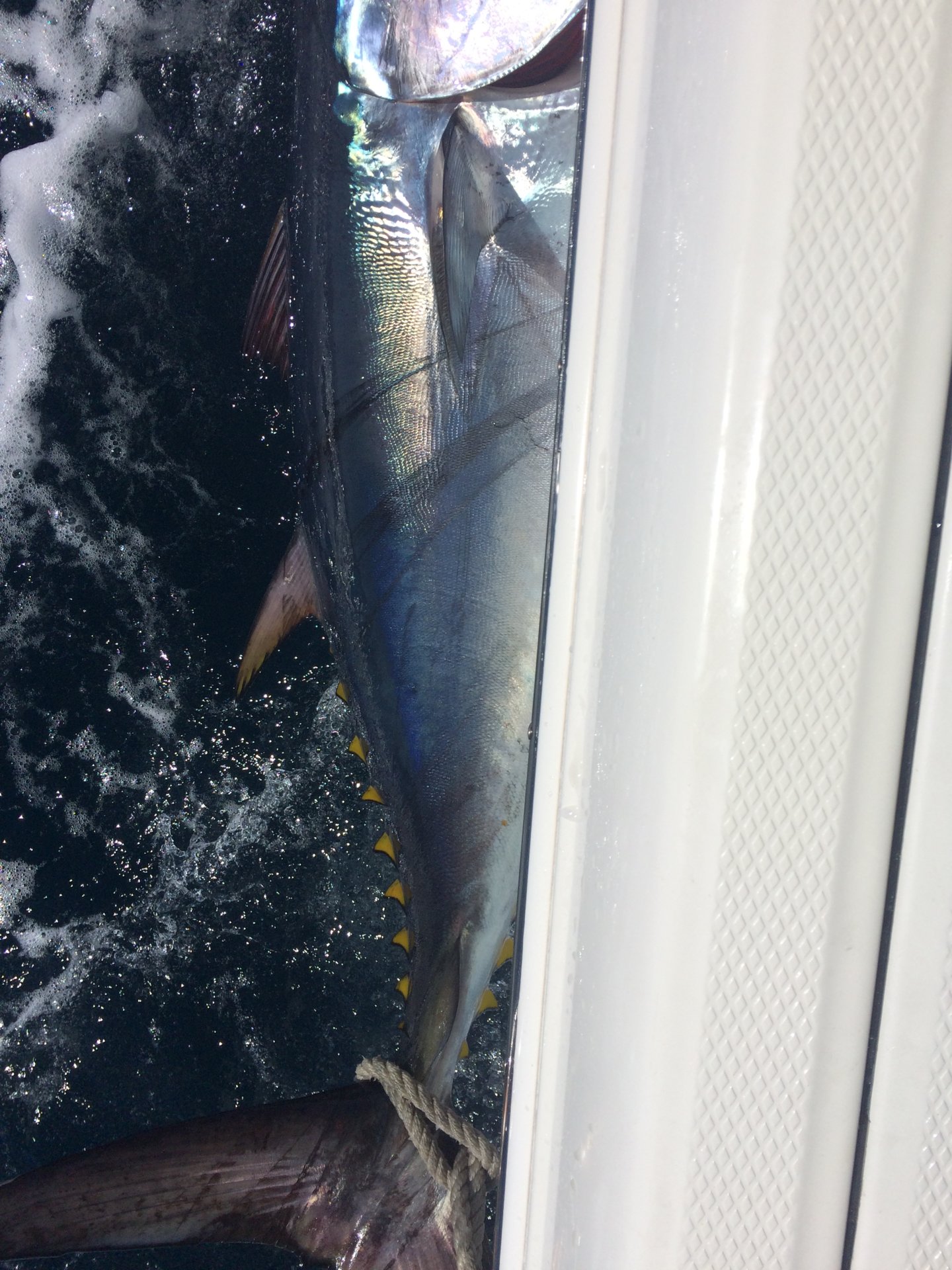 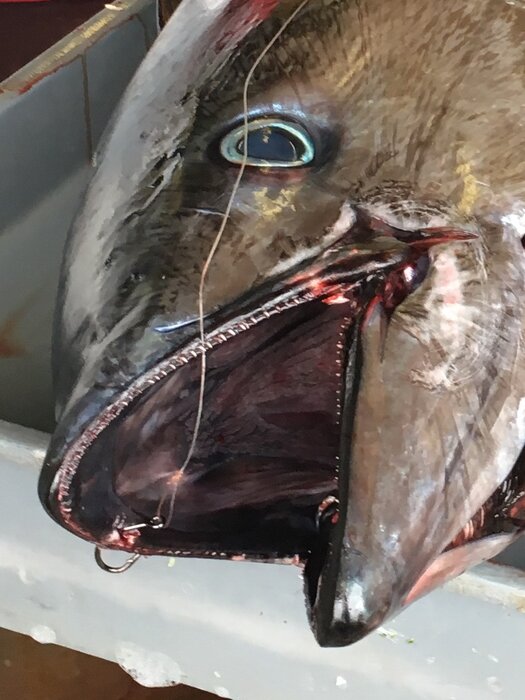 Wow the hook is barely in the front lip. Nice job landing it.
Upvote 0

Nice going solo! nobody wanted to fish with you yesterday?
Reactions: Willdoggy
Upvote 0

kinda like an updated version of "old man and the sea"

Boat
A work in progress...

lougio said:
Nice going solo! nobody wanted to fish with you yesterday?
Click to expand...

there were a couple of boats out there.
Upvote 0

Solid fish for a solo run especially. WTG and thanks for the report.
Toggle signature

Me, I'd drag it back and if it tax man cometh, he cometh.
Upvote 0

Toggle signature
28 Have you never heard?
Have you never understood?
The Lord is the everlasting God,
the Creator of all the earth.
He never grows weak or weary.
No one can measure the depths of his understanding.
29 He gives power to the weak
and strength to the powerless.
30 Even youths will become weak and tired,
and young men will fall in exhaustion.
31 But those who trust in the Lord will find new strength.
They will soar high on wings like eagles.
They will run and not grow weary.
Reactions: undrH2Ohntr, bent rod todd, djennings and 4 others
Upvote 0
E

The smile says it all... nice work man! Mojo flowing for sure!
Upvote 0
P

I tip my hat to you sir
Upvote 0

Throwin in the towel

Throwin in the towel

Mr. Krabs; You have the BEST Memes!
Reactions: mrkrabs
Upvote 0
Show hidden low quality content
You must log in or register to reply here.

Upvote 1
B
Offshore I Suck Again - BFT Own Me