So my buddy asked me to come fishing for marlin on his 55’ Hatteras on Wednesday. I couldn’t possibly care less about catching marlin, but I jumped on board anyway.....pretty hard to pass up any
opportunity to go out on that sweet
vessel.

So we pulled out of the slip in HB Harbor around 3am Wednesday and headed to Pedro to get some bait. Filled up the bait tanks with a couple scoops of fatty macs with some sardines mixed in.

Had some solid intel that my buddy’s buddy had caught a nice marlin between the 209 and 181 the day prior, so we headed that direction in the dark through the light fog.

Never did end up seeing any marlin, or any life for that matter, around the 209, so we headed toward the 181 approx midday......

Around 2pm as we neared the 181 we happened to stumble upon National Geographic status foaming BFT. These were mostly nicer model BFT in the 40-100lb range, all going apeshit on micro chovie. Basically chewing the paint off the bottom of the boat at one point.

Because this was a trip for the sole purpose of catching marlin, I had pulled an extremely rookie move and didn’t bring any of my own gear or tackle out on the boat. (Figured it would be a waste of energy to schlep any of my own gear on board since we would be trolling pretty much the entire day using the boat’s gear = MAJOR PARTY FOUL.)

So when we rolled up on those foamers by total surprise I began scrambling to try and find an appropriate setup of my buddy’s to cast a lure into the massive ruckus of tunas. After failing miserably to frantically find a setup on board that was adequate and ready to deploy, I decided that I just needed to get SOMETHING in the water before the BFT would manage to sink away.....

So I ended up grabbing one of my buddy’s rods that was basically a 7’ long glorified bass rod with small single speed reel, already rigged up with heavy fluoro leader and a rather large ringed circle hook. I grabbed one of the biggest & liveliest macks from the bait tank, hooked it through the nose, and sent it out away from the boat. I then went back to trying to find some setup on board that I could use to huck a jig or lure into the foamers.....when, of course, the BFT eventually sunk out and disappeared.

We are hanging around that 181 area cruising at a speed of 2-3 knots waiting for the foamers to show up again somewhere nearby, when all of a sudden my mack that was being slow trolled behind the boat (that I had nearly forgotten about by that point in time!

) got absolutely HAMMERED by what we eventually discovered to be an absolute slob of BFT in the 250+LB range.

As I began to battle the behemoth it was quite obvious that I was WAY under gunned with that particular rod/reel setup. It proceeded to strip off nearly all of the line on the spool, only for me to re-gain it back again many many times over the next 1.5 hour grueling battle.
I managed to get the fish up to color at least 3 or 4 times so that we were able to get a good look at the fish and became well aware of what we were dealing with.

The erratic behavior of this BFT kinda threw us off at first as it was darting all over the place way more than a large model tuna typically would, but when we eventually spotted a massive shark down below the boat it all started to make more sense. Poor tuna was not only evading me, but also the hungry shark at the same time.

Well I’m sorry to report that the shark won this particular fight when he eventually got ahold of my tuna and quickly managed to shear off the heavy fluoro leader - sending my precious tuna bye-bye and effectively ending the battle of epic proportions.
Heartbreak Hotel status!

After that we tried in vain to re-locate the school of tuna for the rest of the afternoon.....but to no avail.

Planning to head back out this weekend for a re-match. You can rest assured that I will NOT be under gunned for the next bout.

Posting a photo of the chartplotter so you can see our tracks while chasing that fatty-pig-fatty tuna. Pretty much all of the action went down right at the 181.
We were able to successfully hook a couple BFT in the 40-60lb range by casting flat falls into the foamers, but they all came unbuttoned eventually....you could totally feel TONS of other tunas slamming into the line which I’m pretty certain was the reason the lure got knocked free from the hooked fish.

Hope you guys can use this info and have better luck than I did! (My own stupid fault, I know....)
Just goes to show that even when you are seeing 40-100lb models crashing on bait.....there are still some jumbos lurking around that could end up making/ruining your day.... 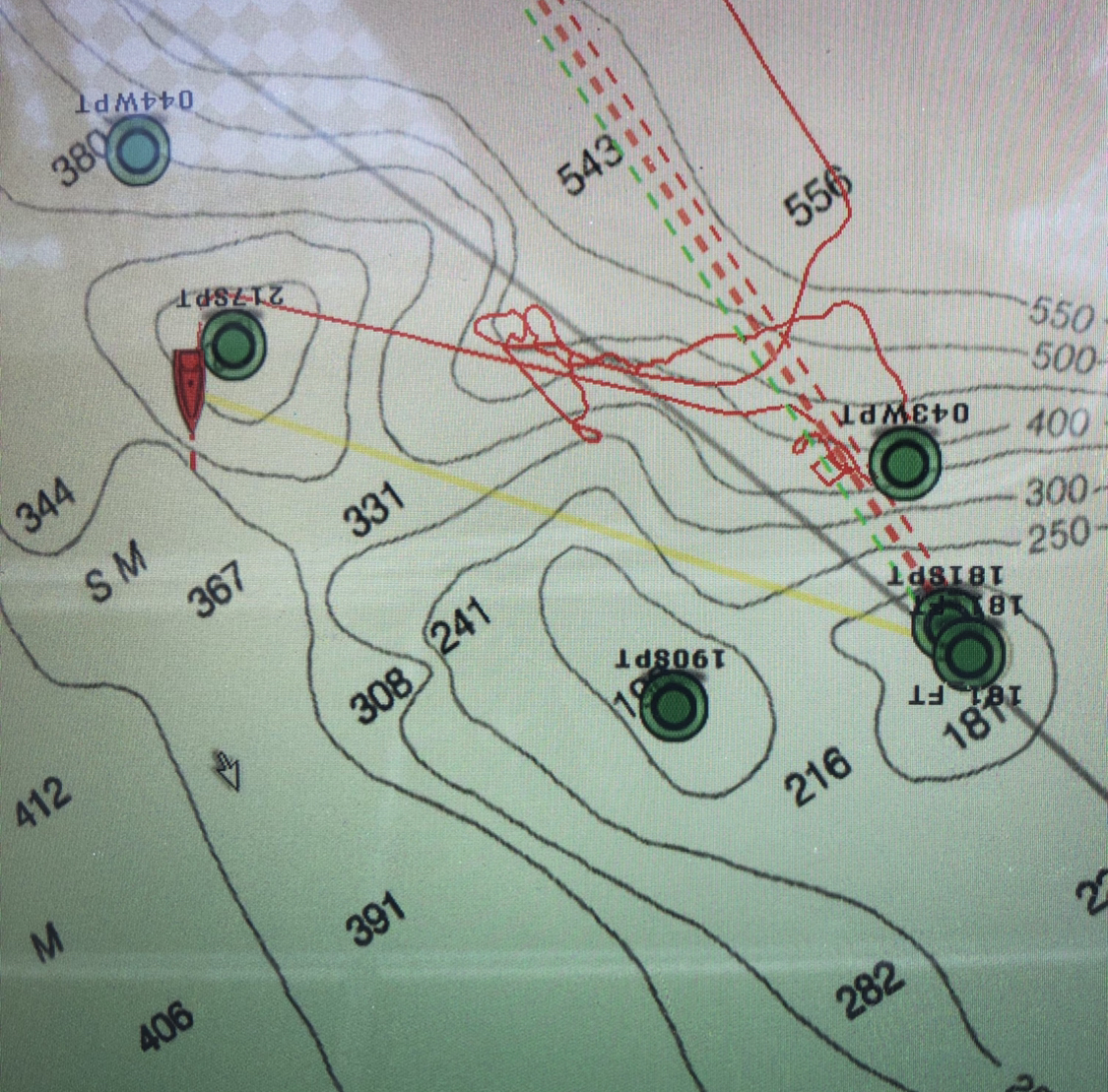 Damn shark, everyone should have a friend with a 55' Hatteras.
Reactions: Ryan js and KneppNasty
Upvote 0

so you could buy macs only at bait barge ?
Toggle signature
1. Faith 2. Family, 3 Fishing

Very cool! Sorry it didn't end with blood on the decks.

Why did you head to Pedro for bait instead of Nachos/LB?
Reactions: KneppNasty
Upvote 0

Did you try swinging the marlin jig spread through the foam? Curious...
Click to expand...

We kinda swung the marlin trolling spread by the foamers as we rolled up on them, but not through the middle of it or anything like that.

To be honest as soon as we all spotted that joyous sight of tunas going absolutely apeshit nuts crashing on bait we all quickly ditched any regard or thought for marlin fishing or the trolling spread we had our, and we all snapped into the frantic ‘THIS IS GO TIME” mode and started concentrating on what we needed to do to get some of those fatty tunas on the boat.

All the while we could hardly even believe what we were seeing before our eyes!
Upvote 0

vipertom1970 said:
so you could buy macs only at bait barge ?
Click to expand...

Shumba said:
Very cool! Sorry it didn't end with blood on the decks.

Why did you head to Pedro for bait instead of Nachos/LB?
Click to expand...

The reason we headed to Pedro for bait was because they are supposedly open 24 hours and Nacho doesn’t open until 4am (4am at earliest, I’ve seen it be much later though)

But really the main reason we went to Pedro is because my buddy knew that they had a bunch of macs, like really really good ones, both big and small, that had been cured a long time. They sold scoops of them to us for the same price as sardines. Filled both tanks with gorgeous hearty macs and a bit of sardines mixed in as well.
Nacho doesn’t have macs like that as far as I’m aware.....sometimes get some macs with the sardines but never mostly all large macs like San Pedro. I’ve always had to make my own macs there next to Nacho’s flotilla when getting bait in LB.

The dude working the bait barge in Pedro (Paul I believe) said that he himself caught those macs in the HB flats. He wasn’t sure how long that “batch” would last with the tournament coming up and all though.....
Reactions: THE GRAYS
Upvote 0

Very nice report and thank you for sharing. Good lesson in there to bring a little extra gear...just in case as you never now what you might find offshore.
Reactions: KneppNasty
Upvote 0

Damn! That had to be one big shark!!!
Reactions: KneppNasty
Upvote 0

Was at Santa Barbara and got smoked on 20 lb then 25 lb by some grumpy yellows.
My friend told me to bring 40lb and I just took two for bass and free swimming yellows not these ridge fish.
Reactions: Ryan js and KneppNasty
Upvote 0

Offshore Bft on the Tomahawk 2.5 day

Offshore Fishing for bluefin no catching