Just a guy who likes to fish

Back to doing our annual Puerto Vallarta trip with Marla’s Sportfishing after a two year hiatus thanks to covid.

Our trip started out very slow the first day. Saw and chased a school of small schooling yft (probably about 10 lbers) hoping some larger ones were underneath but couldn’t get any hookups. That afternoon went to shallower waters and jigged up a couple of aj’s and triggers for some ceviche. Trolled around for some skipjacks (usually easy to catch) and were only able to get one before setting out another spread in the afternoon. Finally had our first hit that afternoon and it ended up being a little thresher. 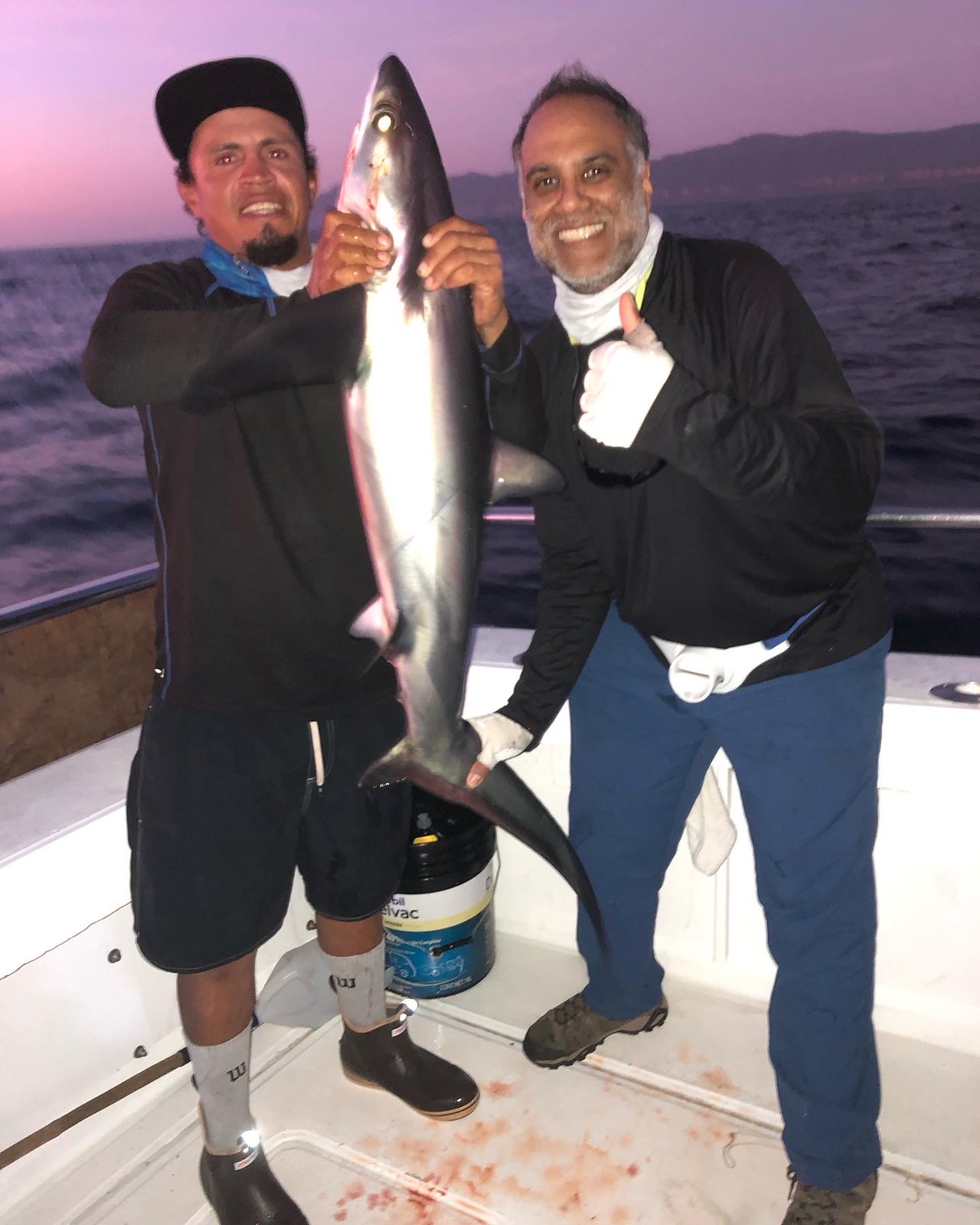 Couple of hours later had another hook up and it turned out this guy wanted to eat a squid. 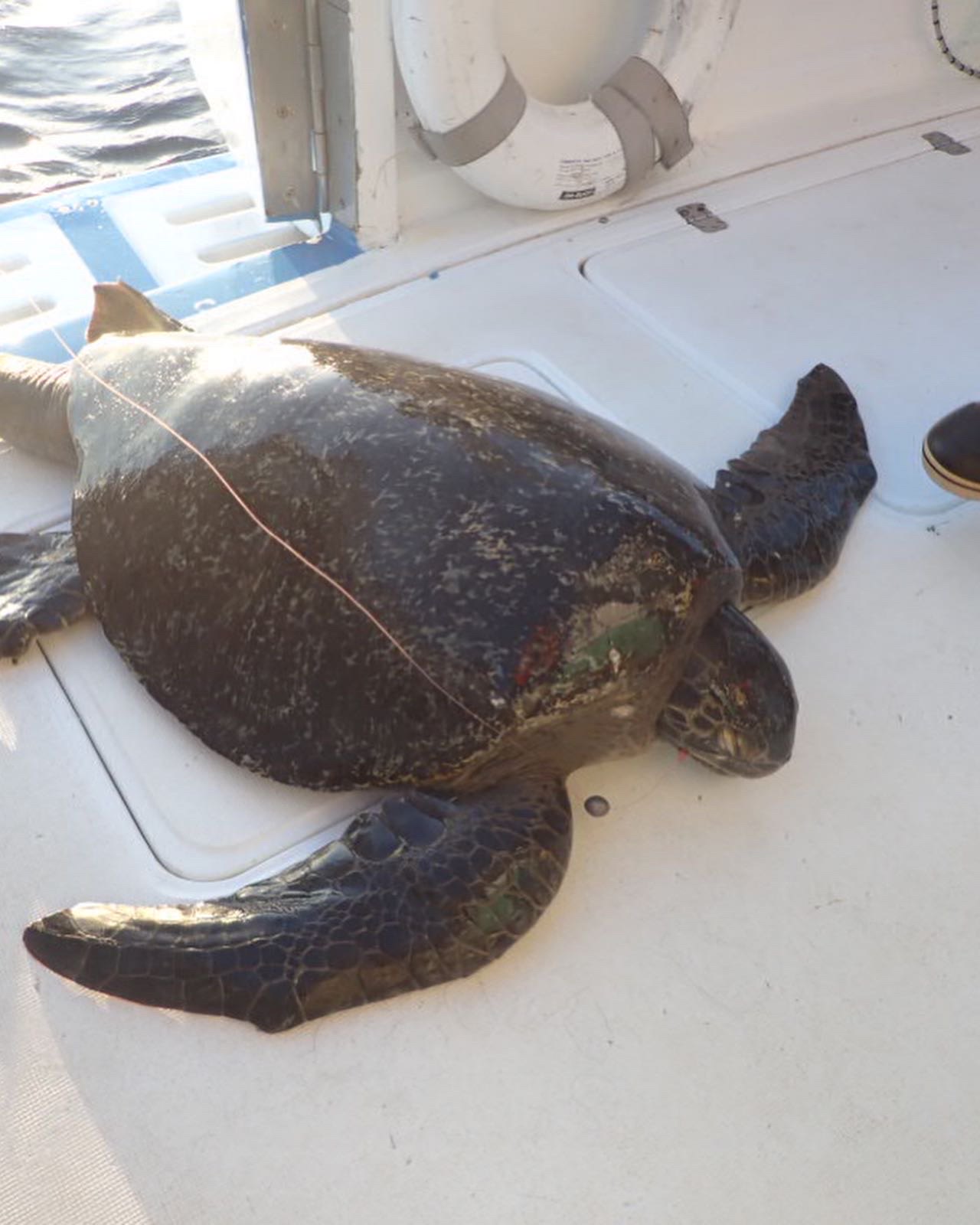 The next morning we had the same, not much life going on. By midday we hadn’t had so much as a nibble so decided to head to the back of the island off the beach there to chase some rooster fish. This is where our trip turned around. We had a blast most of the afternoon casting poppers and slow trolling baits catching both roosters and jacks on lighter gear. 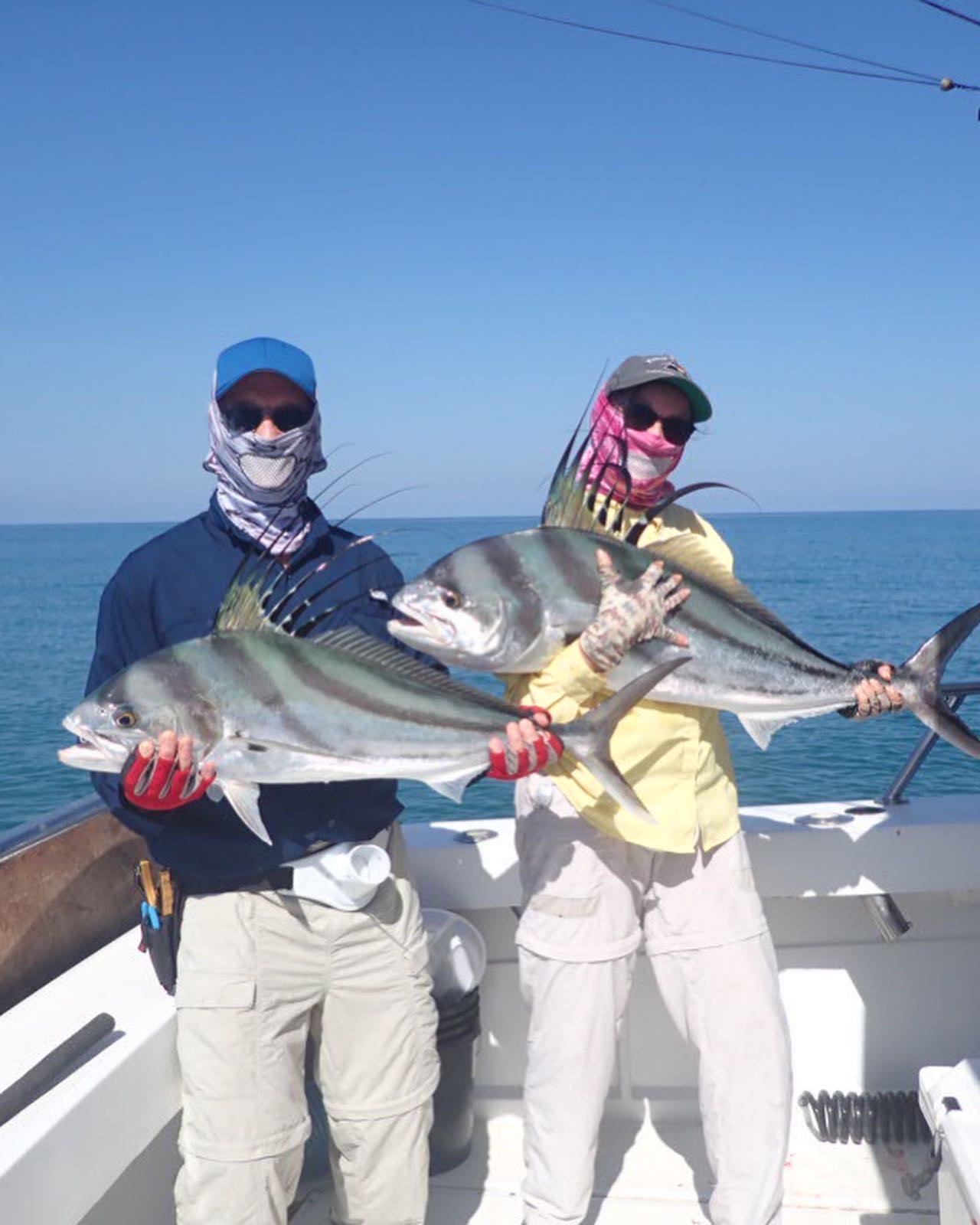 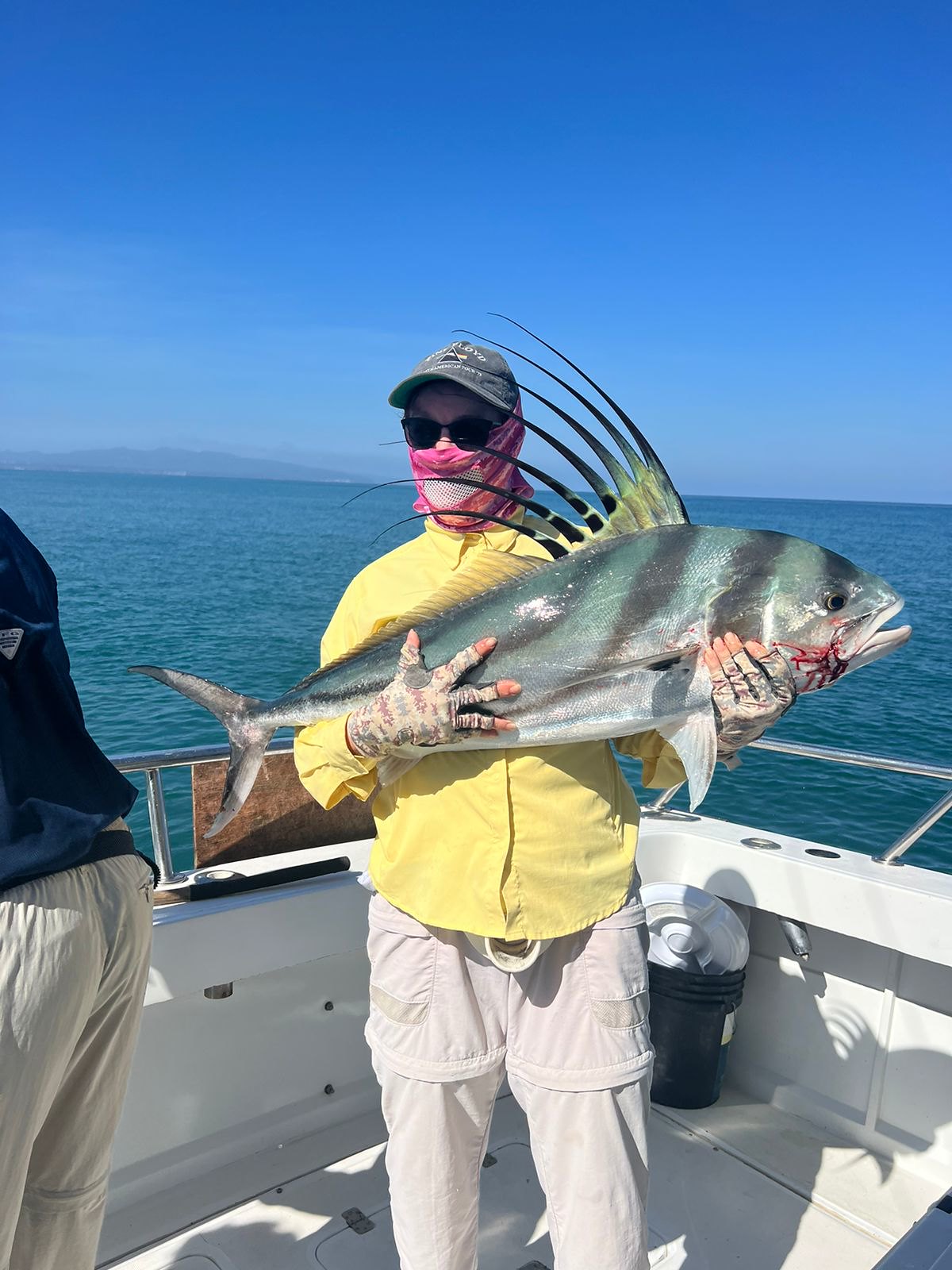 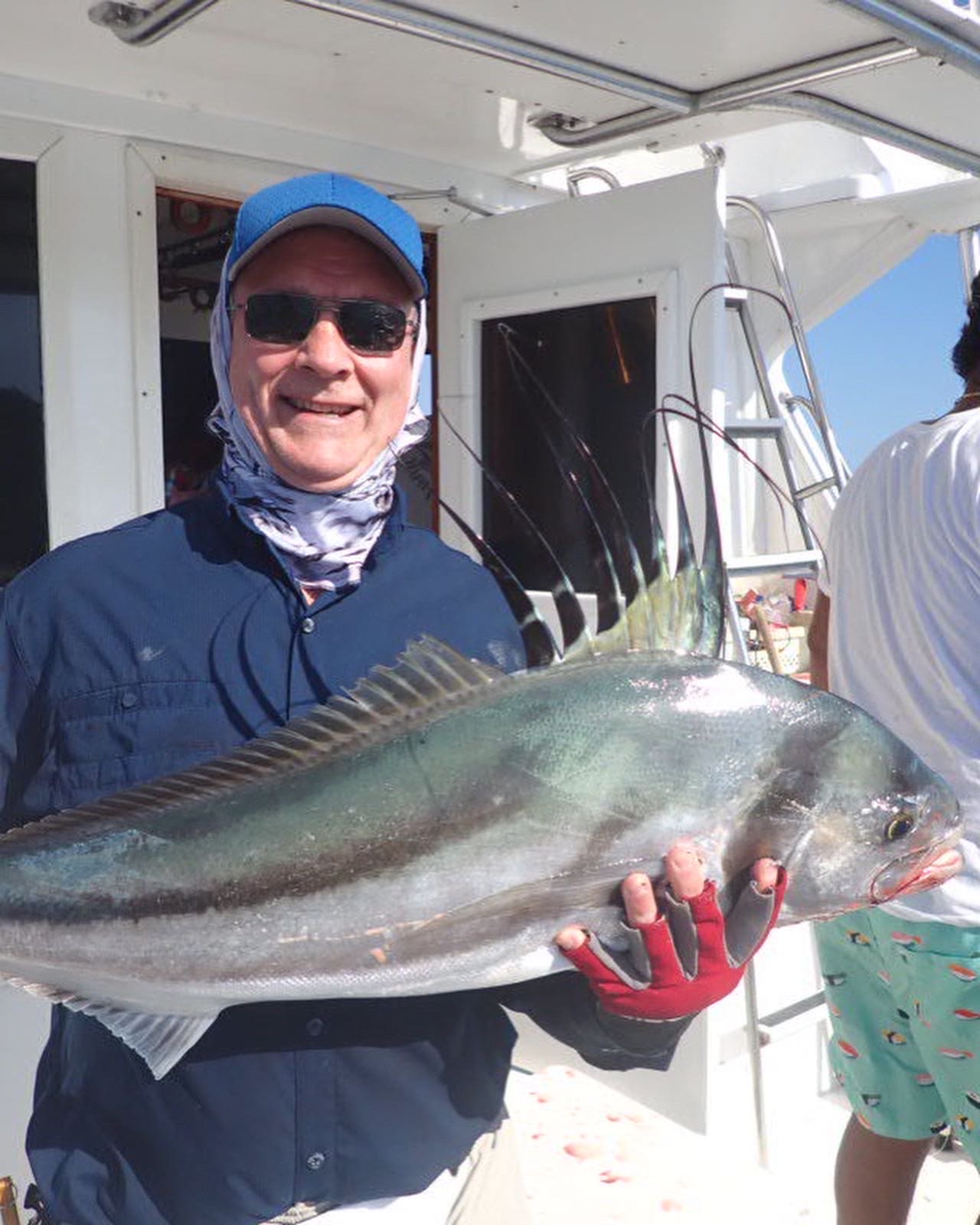 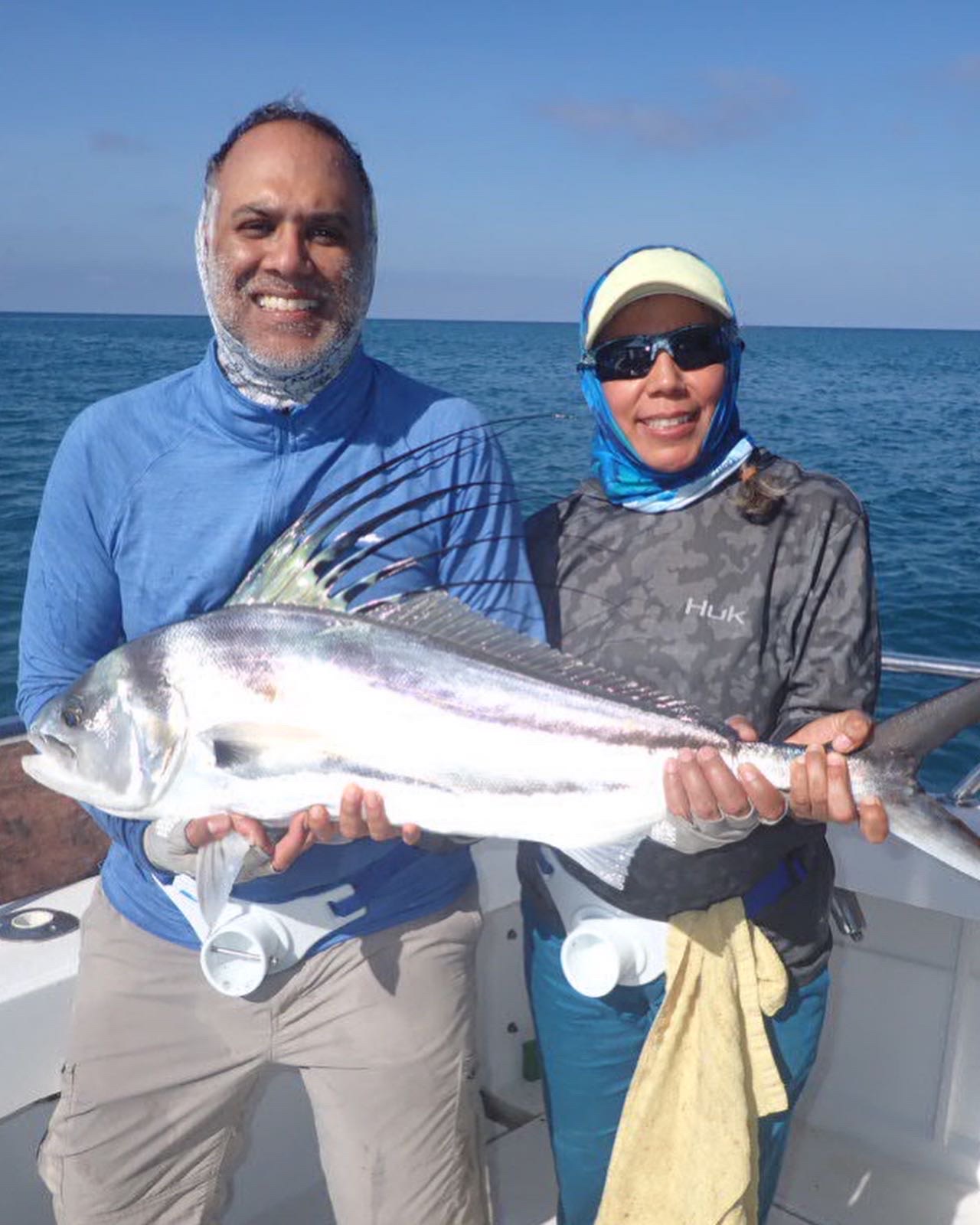 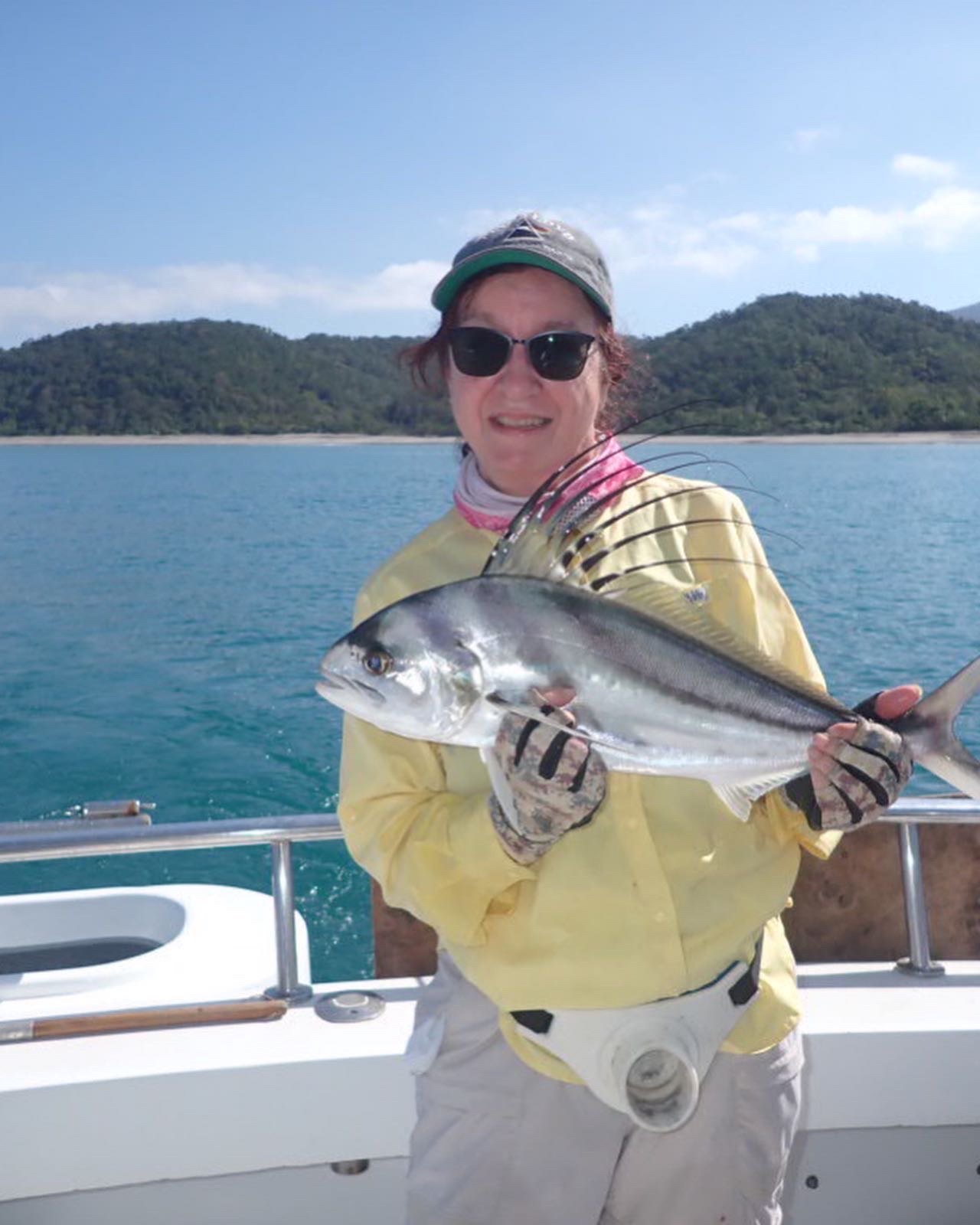 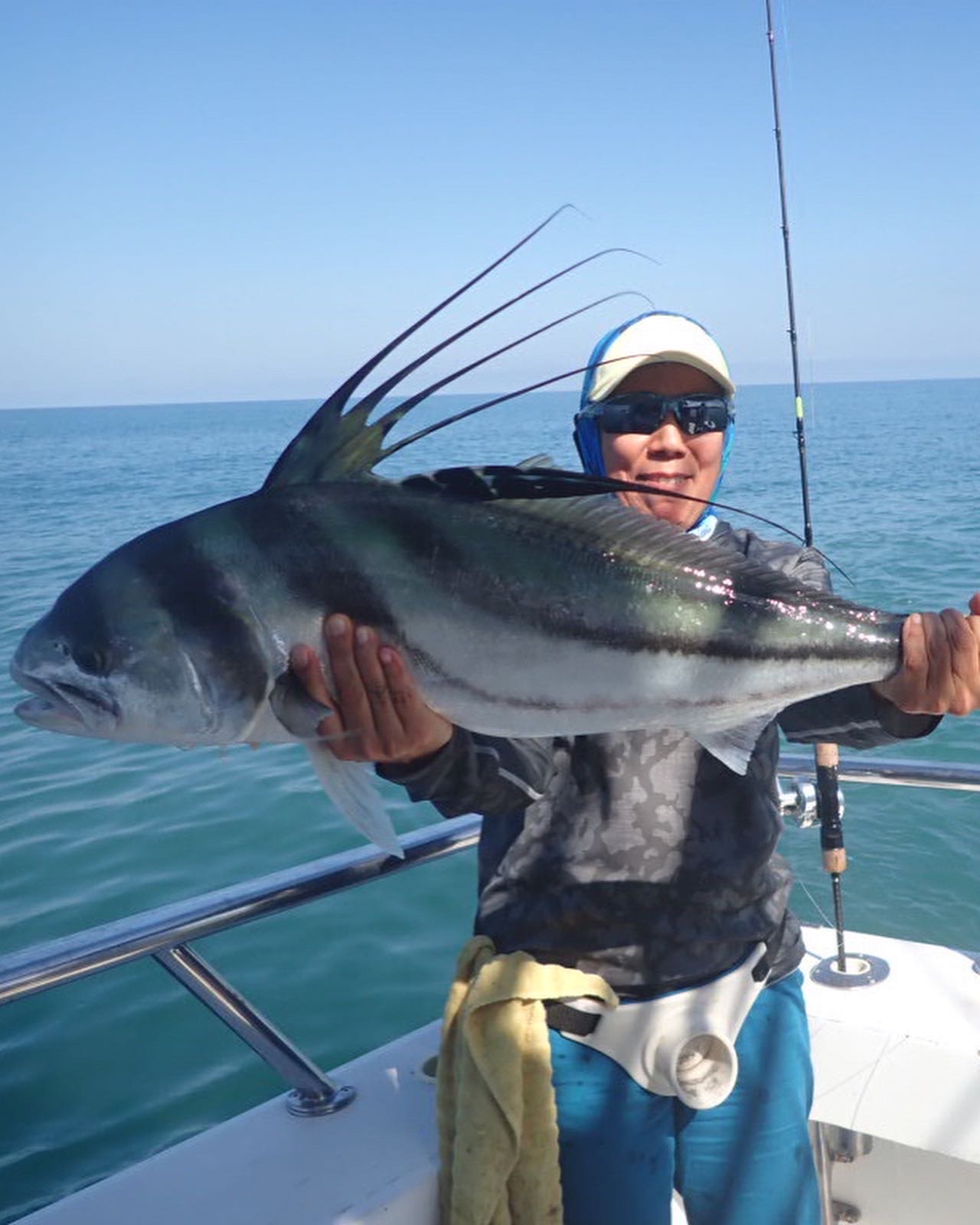 So later that afternoon we decide to try the tuna grounds again so trolled over that way hoping to pick up some skipjacks for bait. This time we had five in no time so our hopes were encouraged a little.

Got to the tuna grounds and set out our spread when we started seeing a school of tuna busting bait with some jumping out of the water. These looked to be a little bigger than the day before. Had one school of bait pass by the boat so I went up front to throw a popper. At one point had something inhale my popper without a topwater explosion but unfortunately no hookup.

The sun had started setting and we were less than thirty minutes from calling it a trip when one of our lines went off. Ran to the back of the boat to start fighting a nice fish and halfway though my fight one of our baits under a balloon was hit. It was pretty much a walk off grand slam for us! 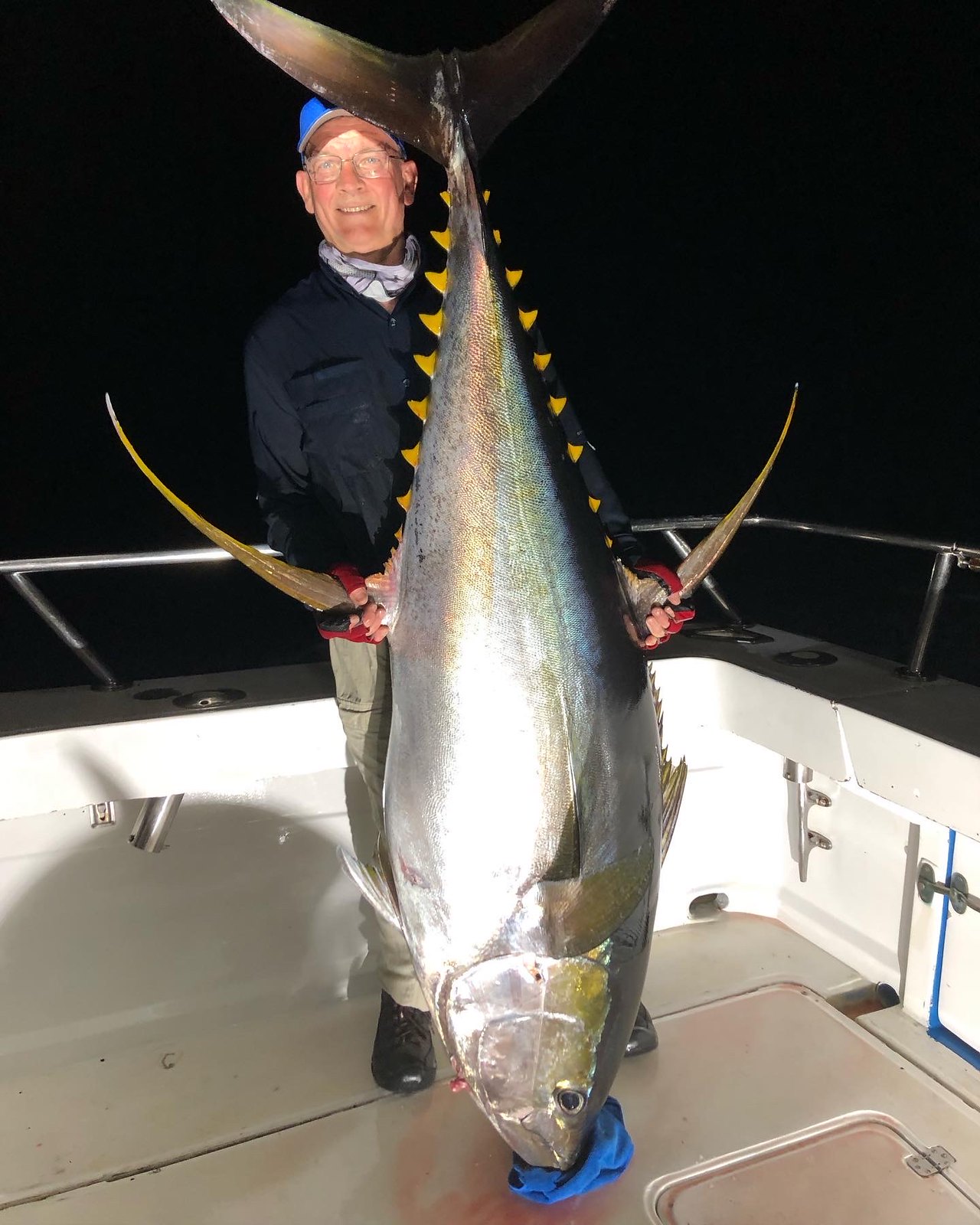 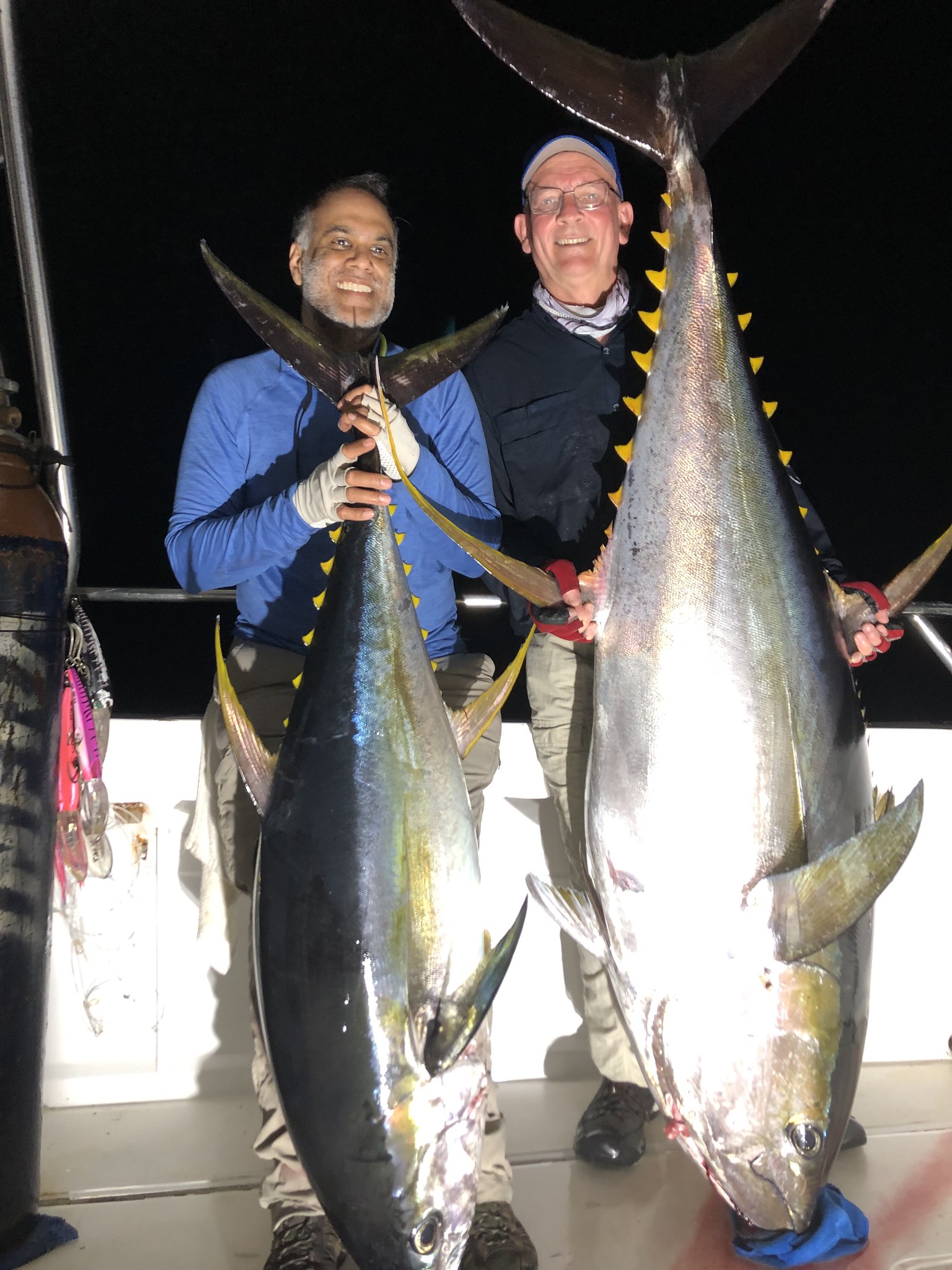 Its that never quit attitude those guys have!! getting it done when it seems like it aint getting done. nice pics and thanks for the report, few and far between these days. Ive heard the inshore action closer in to PV for the day charters is off the charts right now. Im a bit jealous of you guys right now
Reactions: Tunahead and bnz
Upvote 0

Wow!
Big YFT!!!
What an experience!

Great report & photos. Looks like a excellent time was had.
Reactions: Tunahead
Upvote 0

Nice, 2 out at the bottom of the 9th and hit a walk off homer! That was on the Marla’s IV? That’s your home away from home!
Toggle signature
When I was your age, Pluto was a planet.
Reactions: Tunahead
Upvote 0
B

Just a guy who likes to fish

hucklongfin said:
Nice, 2 out at the bottom of the 9th and hit a walk off homer! That was on the Marla’s IV? That’s your home away from home!
Click to expand...

Yes, we’ve always gone out on the IV or the II. Smaller groups of only four so haven’t done the No Tuna No Chinga yet.
Reactions: Tunahead
Upvote 0

Great Report and Pics. NICE Tuna, Roosters too! Some fun winding!
Glad you all had a real fun time, EPIC
Upvote 0

Bill, looks like you had a good trip. Sorry I could not make it this time.
Upvote 0
Show hidden low quality content