Mako sharks are so bad ass!

Yo! Ima go catch a TUNA!

My good buddy Hector invited me to join him on a 3 day shark fishing adventure in San Diego. He lives in Vegas, and I flew in from Utah. We've both fished with one of the well known Fly Fishing focused charter captains out of Mission Bay before and were looking forward to another shot at these acrobatic pelagic predators.

Saturday morning we headed out on a 23' skiff and, after a 1/2 hour run, settled in to watch over a nice long chum slick. Later that afternoon, and three location changes later, we threw in the towel feeling defeated and a little beat up from rolling in the ditch all day on a somewhat bumpy sea. Oh well...there's no guarantee in fishing! Least of all in Mako fishing! Headed back to the hotel, got some tacos for dinner, and hit the sack.

Sunday morning started out much the same, but with a much smoother sea state. We hustled out to our first area and wouldn't you know it...damn near ran over a nice sized Mako that was just chillin' near the surface. Of course he bolted when the boat buzzed by, but our charter Cap't "Sharky Dave" caught a good glimpse of him, quickly positioning the boat up-current and put out the bloody chum. He really wasn't sure if it would work or not, but decided we were close enough to the spot he was planning to fish anyways, so why not wait it out for an hour or two to see if the Mako would sniff us out.

Wouldn't you know it....about an hour later I'm staring into the abyss watching little chunks of chum drift away on the current and out of the darkness I see a 8'-9' Mako Shark just sort of "materialize"! I hollered out "SHARK....RIGHT THERE!!!...and it was pure pandemonium after that! Hector grabbed the 15 weight G-Loomis fly rod rigged with an X-large size Galvan fly reel. While Captain Dave quickly set up the teaser rig with a nice bloody hunk-o-bluefin to get the shark fired up. Turns out we didn't need the teaser too much as this bad boy had come to EAT! It took the big fly on the first pass and Hector got a beautiful hook set right in the fleshy corner of it's mouth.

HANG ON BOYS! This 200+ pound shark immediately headed for Hawaii doing mad jumps and flips as it went! This crazy ass Mako jumped EIGHT times in a row. Most of them 10 or more feet in the air!
In the chaos of it all, somehow the handle on the Galvan fly reel either fell off or got busted off. Once the initial drag screaming run had ended Hector went to start retrieving some line and realized there wasn't a handle there anymore! All that was left was a little 1/4 inch long threaded stem. He worked on keeping the line tight by just palming the reel, while Captain Dave scrambled to come up with a solution.
Enter the Dramamine tube.... Ha Ha...no shit, he used a surface iron hook to quickly bore a small hole in the bottom of one of those chap stick sized plastic tubes that Dramamine pills come in and told Hector to stick it on the little threaded stem. It was wobbly and and kept falling off, but about one hour, and 1.8 miles, later we cleanly released the nice Mako. Cheers, high fives, and beers were in order, as well as some rest and recovery!
We ran back to the zone and reset the chum line. A little while later a small 30-ish pound Mako came in and I quickly hooked, landed, and released it. What a day!

Monday morning was another total glassy sea state so we made a nice smooth run back to the zone and wouldn't you know it....Sharky Dave spots another Mako up on the surface just loafing around. He backs the throttle down and idles into casting distance where he tried several time to get the shark's interest with a dead mackerel...but this one just wasn't interested. It sank out never to be seen again. We buzzed over to a nearby area and set out a nice fresh chum slick and started the long waiting game. Somewhere around slack tide, Captain Dave was taking a leak off the back of the skiff and this absolute SEA MONSTER shows up. He said to us "Boy's...this is a BIG one" I took a look, and I gotta tell you something deep inside me was like...ummm, this is probably a BAD idea. It struck some primordial nerve and I honestly felt a little fear. This thing was significantly bigger around than a 55 gallon drum, had a pectoral fin spread over 6' wide and was every bit of 12'-14' long. Sharky Dave said it in the 800-900 lb class...EASY!

You could tell from it's demeanor that it was pissed off and wanted to kill something....it had followed that delicious bloody trail and now that it was at the end of the line it couldn't find the source of the smell. It would swim out of the slick and immediately turn back with a violent swirl to get back to the smell. I kept staring at it and by now, my hand were shaking and I had a cold sweat.

Sharky Dave says to us...."Fella's, we really have two options here...I have this x-heavy boat rod with a big game reel loaded with 400 lb and a 20/0 circle hook. We can bait this bad boy up and you can spend the remaining six hours of your charter pulling on this big bitch until your arms ache, or....we can hook her on the fly gear, maybe get a jump or two from her and then break her off and drink beers while we brag to each other about how awesome it was!"

We chose the second option!

It went off just like he thought it would, she chomped the fly, Hector set the hook right in the corner of her mouth and she headed for Hawaii! About 100 yards from the boat she did her first big jump, then another, followed by a massive third spinning jump which ended with her landing on the fly line and snapping the leader.

Once our hand stopped shaking, we all cracked a cold beer and started working out how to tell the stories! It was the perfect last day of an epic adventure!

I have lot's of amazing video footage, but it's all on Hector's DSLR camera, so you'll have to wait for that, but here's a few pics from my iPhone of the 200lb'er doing some jumps. Sorry it's blurry... they're just screenshots from a short video. I didn't want to post the whole thing until I have Hector's & Sharky Dave's blessing. 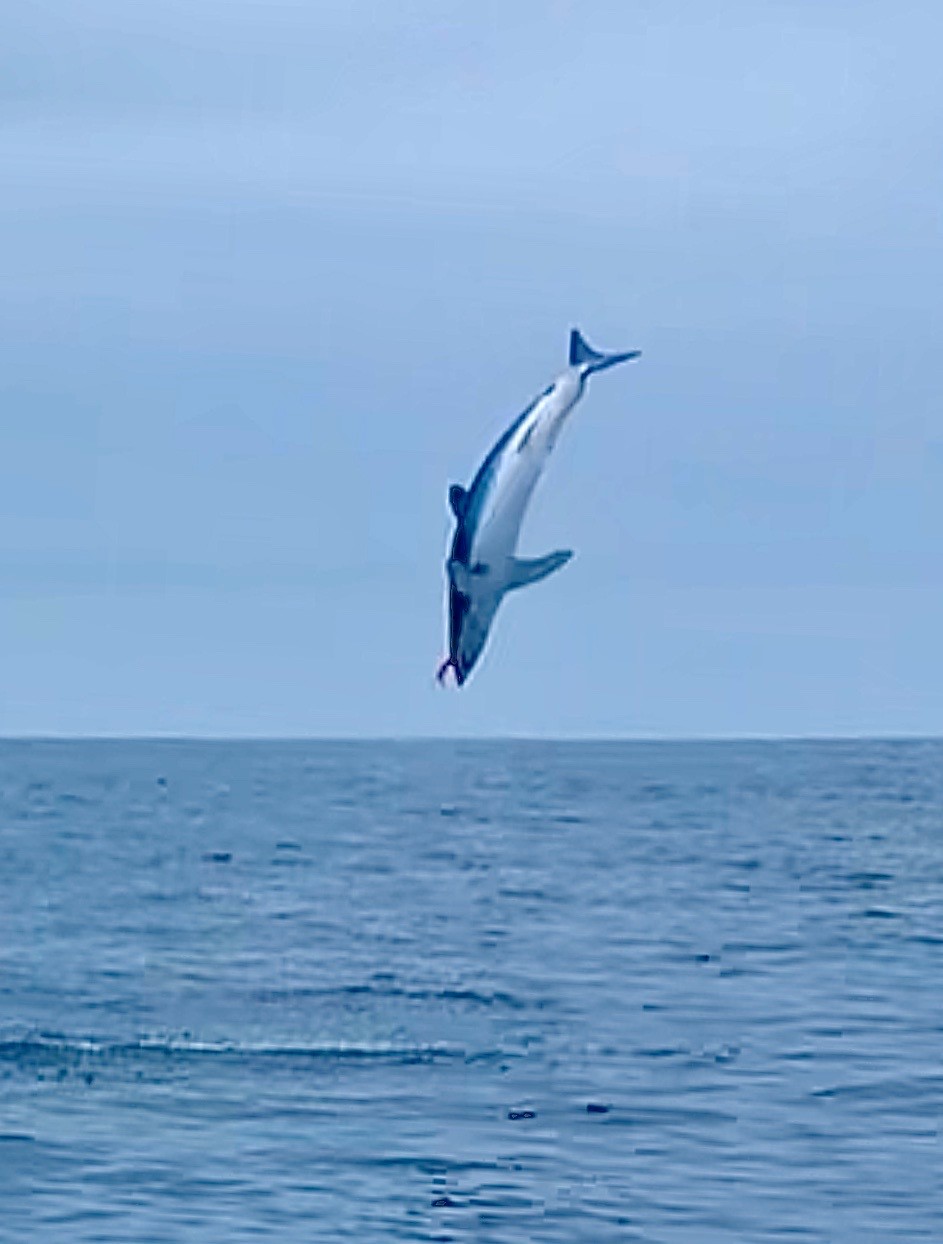 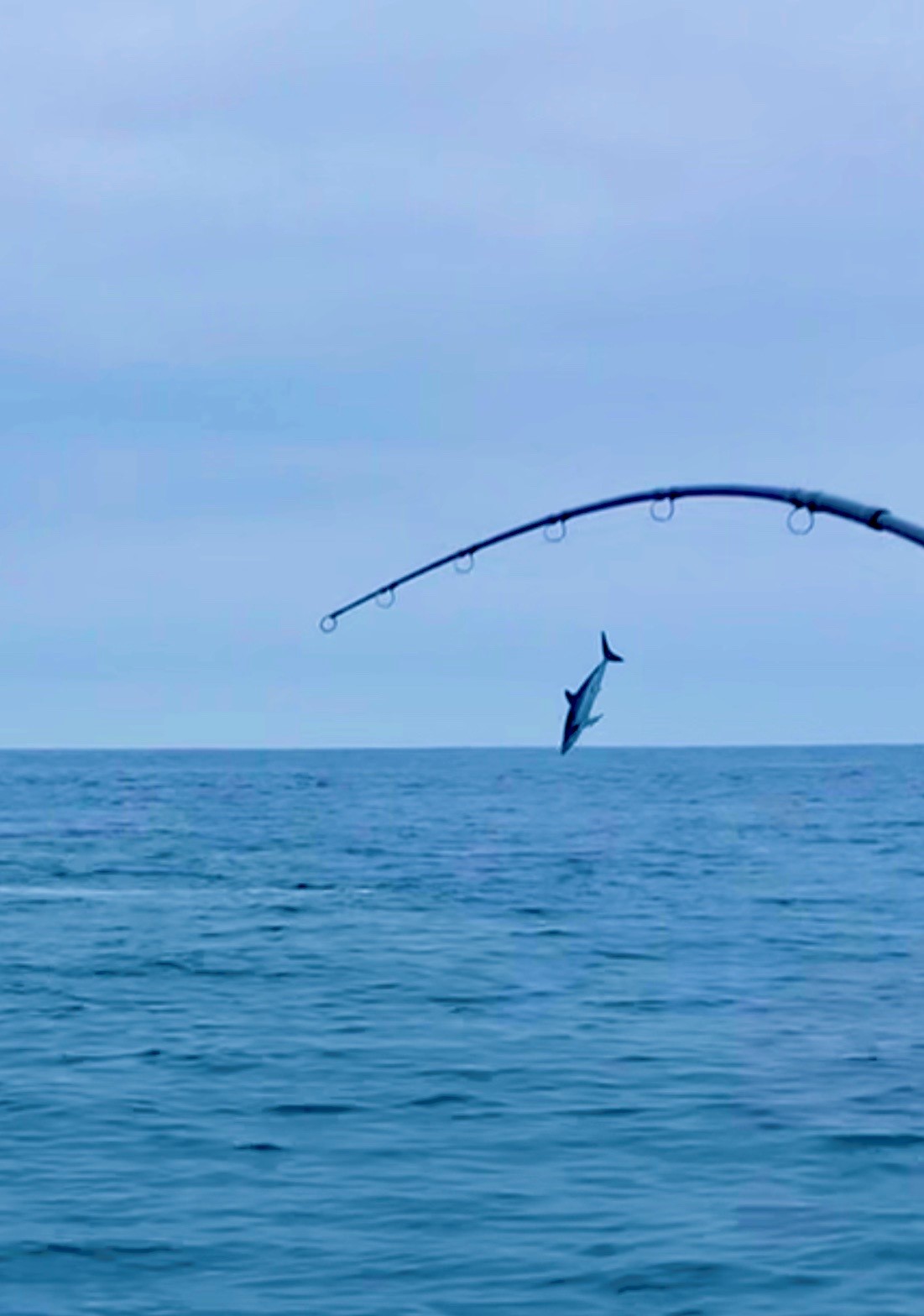 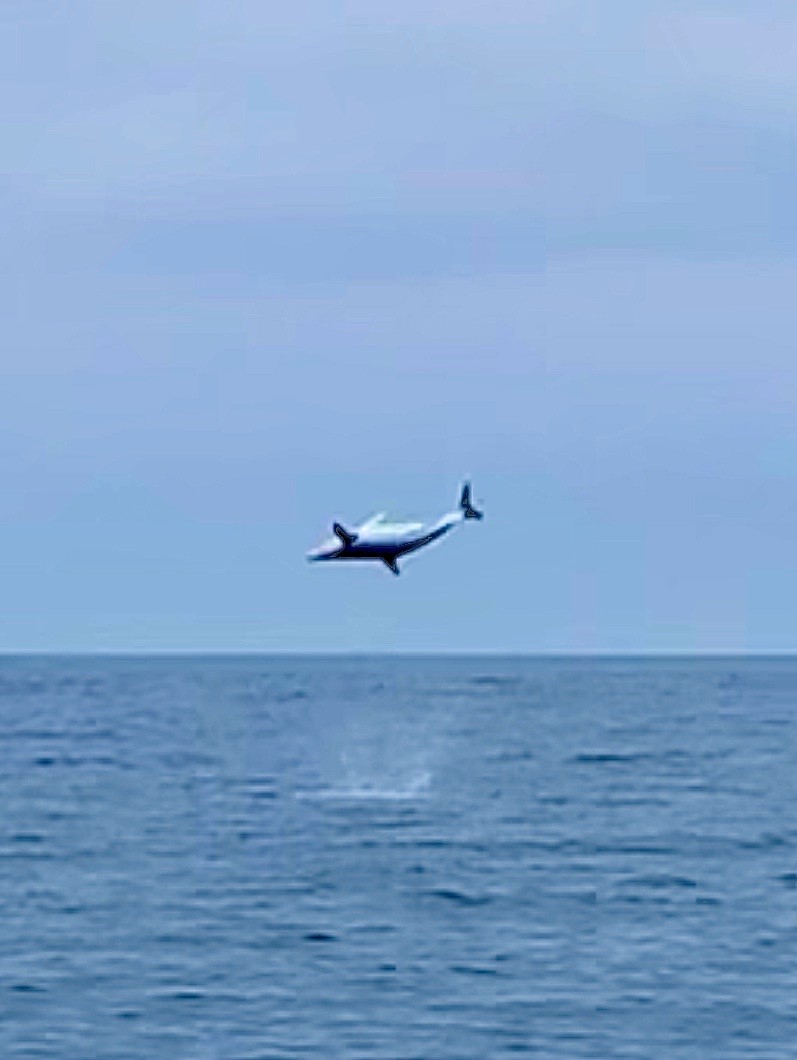 I not talking about chasing tommy cats or Bluegill!!

why are they in the air? Are they birds? I thought Mako's were sharks????
Upvote 0
M

Awesome! What a thrill.
Upvote 0
W

Usually.... like marlin..... The older and larger ones have to expend a considerable amount of energy just to lift that heavy body out of the water. IE.... The 350# blue marlin jumps many more time than "grander" does. Many times this knowledge.... helps the angler and the skipper know approximate size of "Unseen" fish/ shark that doesn't jump..... larger for sure.

Of course this is just a rule if thumb.... and I'm sure there are many who will say their "giant" jumped 40 times..... but usually one of that size may jump (partially) once or twice.

Anyways..... great write up brother. Nice picts too. Can't wait to see any other footage you may post later. Good job.

That was a wonderful story.
What excitement.

I assume "sharky Dave" is Dave Trimble?
Toggle signature
"What is the MLPA anyway? They are the meanest people ever!"

Usually.... like marlin..... The older and larger ones have to expend a considerable amount of energy just to lift that heavy body out of the water. IE.... The 350# blue marlin jumps many more time than "grander" does. Many times this knowledge.... helps the angler and the skipper know approximate size of "Unseen" fish/ shark that doesn't jump..... larger for sure.

Of course this is just a rule if thumb.... and I'm sure there are many who will say their "giant" jumped 40 times..... but usually one of that size may jump (partially) once or twice.

Anyways..... great write up brother. Nice picts too. Can't wait to see any other footage you may post later. Good job.

The energy expended is also why the ones that jump also usually come in quicker.
Reactions: woodfish330
Upvote 0

Yo, Mack! What an epic adventure! I cannot wait to try mako shark fishing now! Love the pix and can’t wait to see the video!

Quick question...just curious...Does Sharky Dave still have all of his fingers and toes?? What a great MacGyver move with the Dramamine canister. Love it!

Looking forward to using our new yumee flyer on some fat blue fin in a few weeks!

Who said Shark Week was going to suck? Post of the month. Good job.
Toggle signature
@flytieoc on Instagram
Upvote 0

Nice report. Those mako's sure do like to jump.
Upvote 0