Loss of a friend overshadows a decent weeks fishing

Received the following note from Wayne Bisbee earlier this week:

The East Cape Offshore Tournament is almost here and I wanted to pass along the latest update beforehand.

But first I have some sad news to share. Paul Watson, the publisher and editor of Bisbee’s Marlin World, passed away unexpectedly earlier this month while on a trip to Cabo. Paul’s dry British humor, talent and friendship will be missed and I know you all will join us in sending condolences to his family in Madeira. Since many of you will be arriving for the tournament, please stop by for a toast and remembrance of Paul on Saturday evening, August 1, at Paul’s favorite place to relax in Cabo, the Tiki Bar, next to the Baja Cantina Marina.

On a happier note (and one Paul would appreciate), the fishing has been absolutely epic at East Cape, which is perfect timing for the ECO. Our good friend Ken Matney of Hi-5 Lures was just down and he said blue and black marlin were all over, with boats averaging five hook-ups per day. A 770-pound marlin was weighed in. Ken says the action is the best he’s ever seen, so that’s a great report for our East Cape anglers…Wayne Bisbee

If you want to follow all the action starting on Wednesday, here is the link to live scoring: https://bisbees.catchstat.com/Default/Tournament/LiveScoring?TournamentID=64

Very few anglers are bothering with the Islands … most are stopping short and fishing Imperial Beach. At last word, there are fish at the weather side of North Island, Middle Grounds, Ribbon Kelp, South Kelp and SKR.

Be sure and have all your necessary paperwork filled out and ready to show the Mexican Navy. …www.fishdope.com 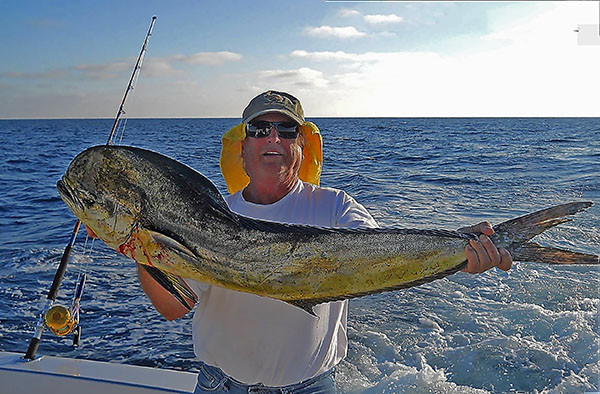 Bert Sabo holding the largest dorado of the trip.

Now it’s time for Offshore action -- very simple, take the south point of the Island Todos Santos and travel straight out 20 miles offshore where the Tuna Pens are situated. The "Reel Adventure," with Capt. Wes Price, Richard Fagner and Bert Sabo, fished for two days with live bait mackerel and trolling jigs for limits on dorado and yellowtail; they also caught a couple of yellowfin tuna and one skipjack. The surprise was two hookups of striped marlin that they released. Weather was excellent for the trip. …Coral Marine Store, Edgar Sanchez

WAHOO!!! Well the first couple of “local” wahoo have been boated. Top Gun 80 got one a couple of days ago followed by a 70-pound fish on the Royal Star and a 50-pound on the Independence.

The boats are working schools of yellowfin and dorado and catching a few wahoo by accident.

Down a bit farther from 160 to 250 miles it is reported there are lots of big dorado on kelps. .…www.fishdope.com 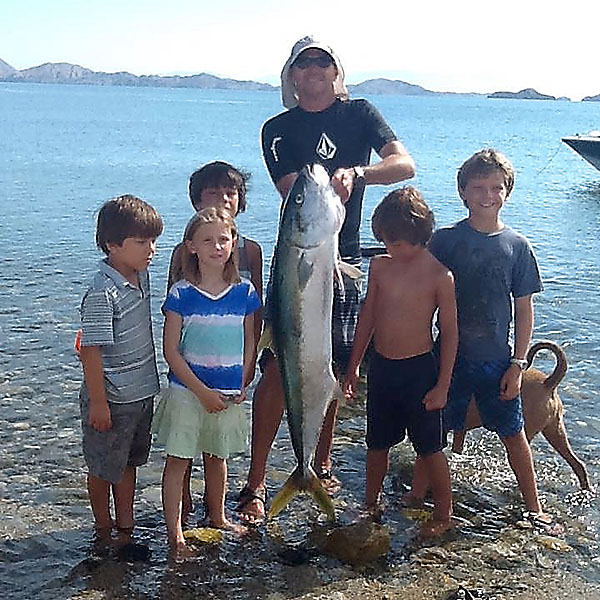 Jan and John went out fishing this a.m. and came back with this beautiful yellowtail! It's taller than the kids! Jan also hooked up with a marlin, but it broke the line. They saw some dorado, too! …Ingrid Goerrissen

Tournament in Bahía de los Ángeles -- a lot of boats and pangas --was a great day; the people were very happy because all the guys caught YT between 15 and 40 pounds. 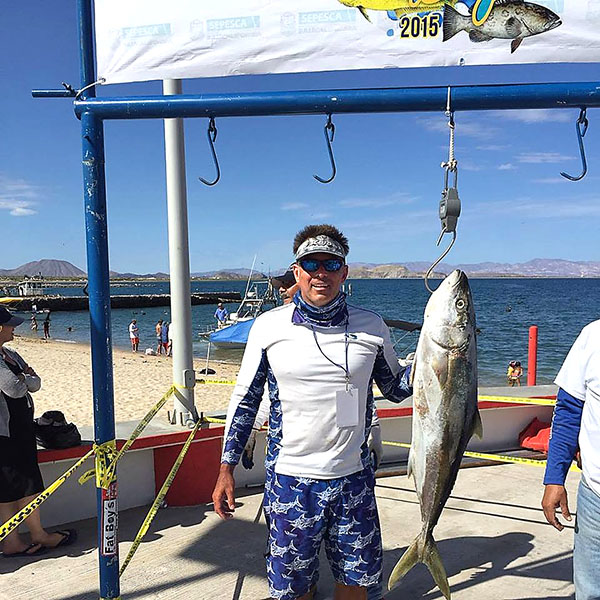 For the 3rd tournament of ‪#‎pescalabaja this year we caught a lot of fish and I caught a few nice yellowtail but I came in 22nd place in the surface class and 27th in the bottom fish class out of about 130 people with only the top 14 places getting points. We had an absolutely great time with good weather, great food, great friends, and unbelievable scenery. Can't wait to do it again...Chris Wheaton 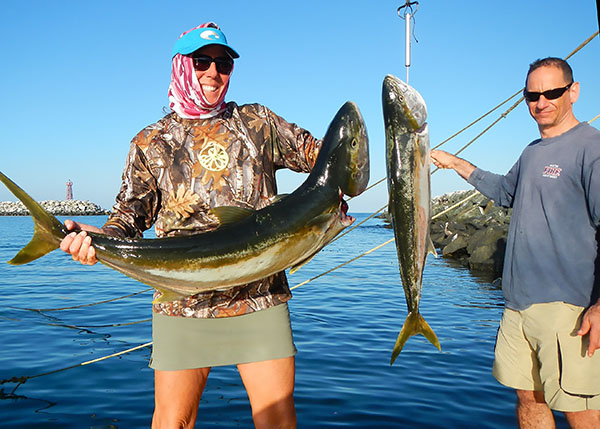 Magnificent weather in the high 70s and low 80s … sunny and until yesterday, calm and cool breeze, just to make us feel comfortable and ready to go fish some more. ...Jose Angel/Cedros Island 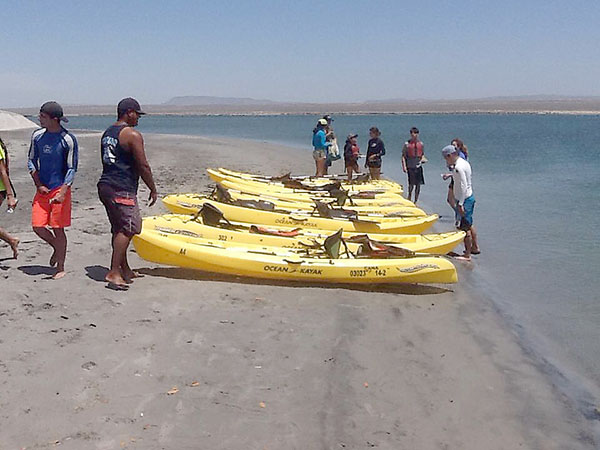 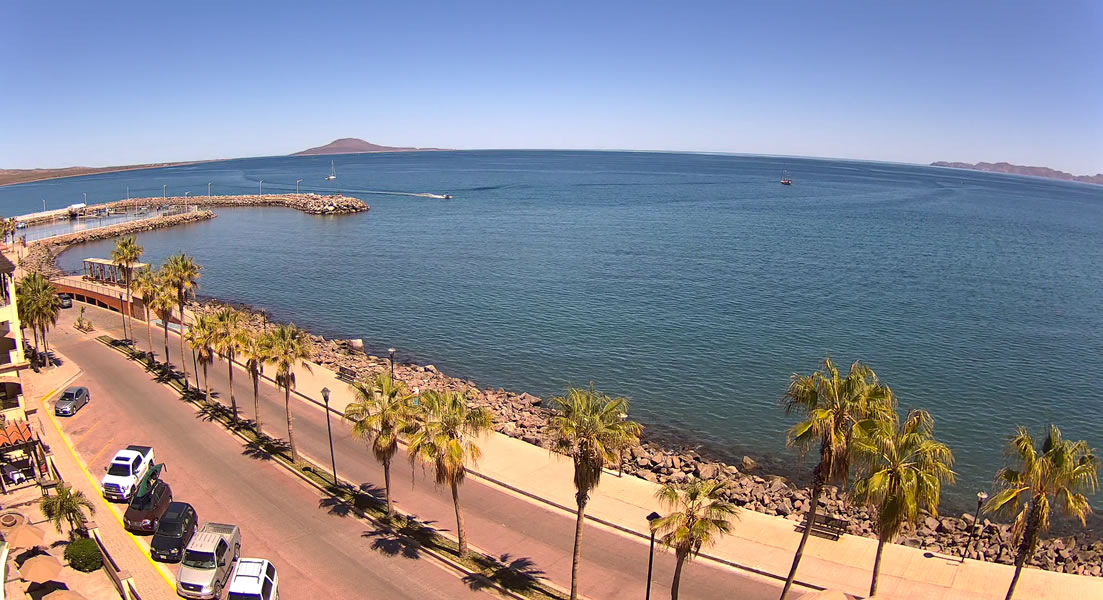 Most of this past week's rain has dried up and we are back to hot weather and cool fishing. The action is cool as it has been all summer but yesterday we saw some bigger dorado hit the fillet table.

Sardina on the current lines out off "La Vaca" did the trick with a handful of dodos -- the largest going off at 18 pounds. That is 50% bigger than the average dorado a few weeks ago before the rain showers dropped by.

Yellowtail are still there for those wanting to sit it out on a high spot. Lagrimas, off the south side of Coronado, continues to be the favorite spot for soaking mackerel and jigging iron.

The shallower spots have been good for small cabrilla and easy limits of triggerfish. Sardina and cut squid work for these shallow spots, with "La Cholla" being the most popular.

Along the north coast, the early morning trollers have been continuing to connect with smaller dorado.

The sandy coastline at San Bruno (up north of town) has been good for small roosterfish with a pair of 14-pound gallos hitting sardina.

The action down south can best be described as "nonexistent." We did an all day survey this past Friday and turned up one dancing mini-sailfish off "Whitecliff" and one quick liplock at "Six-Mile-Reef." The rest of the day was spent looking and seeing nothing but bait schools and a few flying fish.

The only trophy action we have is totally ignored -- roosterfish -- and everybody knows where to look. …Rick Hill, Pinchy Sportfishing 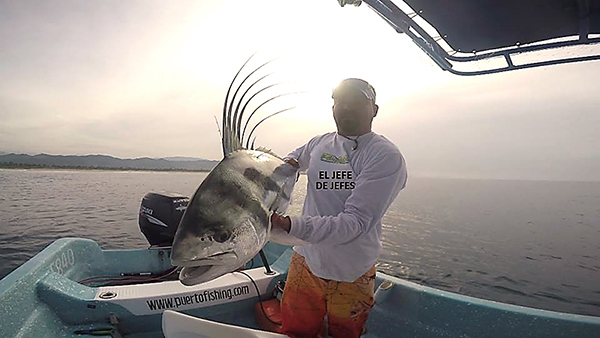 Marlin and sailfish are the main game in town. Striped and blue marlin have been found as close as a couple of miles from shore with sailfish also in the mix. At times, we have found multiple billfish feeding in a concentrated area drawing several strikes in a short amount of time. …Scorpion Sportfishing and El Regalo Sportfishing

Marlin, sailfish and roosterfish have pretty much been the only game in town. The marlin and sails don't seem to be concentrated. Anglers are having events just a few miles from La Ribera, Punta Arena and Punta Pescadero, but billfish are also being caught 20 to 30 miles offshore by boats in search of porpoise schools and tuna. …Mark Rayor, Team Jen Wren

It was a fairly slow week of fishing; however billfish fishing remains very good. Sailfish, and both striped and blue marlin have been taking bait and lures fairly close to the ranch all week.

Yellowfin Tuna – Schools of smaller yellowfin were biting early in the week, south off Vinorama.

Billfish – The blues are taking both lures and trolled ballyhoo. The sails and stripers continue to prefer live caballito.

Roosterfish – The larger 50-pound plus fish are on the first drop offs in deeper water. Almost all were taken on caballito. It has been a good week for roosters. Rancho Leonero 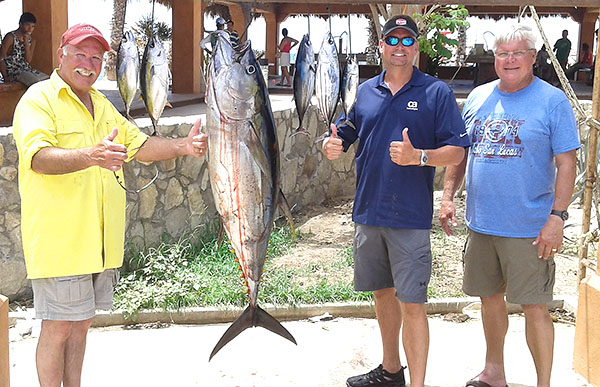 The action on the Gordo Banks for past couple of weeks, which had been for mostly very small sized yellowfin tuna, has now faded out, still a few marlin being hooked into from these grounds, both black and blue marlin, a handful of striped marlin and sailfish. This past week there were marlin to over 300 lb. landed, these fish were striking on trolled skipjack or tuna.

With supplies of sardina still maintaining fleets in the vicinity of the marina jetty the action now has switched north to the Iman Bank, using the small sized sardina baitfish anglers were finding a grade of yellowfin tuna in the 10 to 50 lb. class. No significant numbers, but most charters were accounting for two, three, four of five tuna per morning.

Off the bottom this area produced some huachinango, dogtooth snapper, cabrilla and triggerfish, again no big numbers, but a few quality fish were reported.

Dorado continue to virtually nonexistent, a combination of factors likely the cause for this. Finding any action while surface trolling open waters was difficult, more action was accounted for while using baitfish, drift fishing over the structure where fish were concentrated. Just a handful of wahoo were found, most of these while trolling early in the day with Rapalas.…Eric Brictson, Gordo Banks Pangas.

Our last trip was truly special; Fay released her first ever billfish – a blue marlin, following it up with a sailfish and a striped marlin! …Wilks Hammock

It was a typical fishing week for the Cabo San Lucas sportfishing fleets and as always, there were the haves and the have-nots in the fishing reports for the past week. It just seemed as if the fish were not in the same location for any two days or longer and required a great deal of searching and trying to anticipate where the fish might be for the next day. Adding to the difficulty in making the next day's decision was the changing of the water clarity in some of the areas, particularly in the area from the 95 Fathom Spot to the 1150 Fathom Spot, an area that seemed to have gained more greenish-colored waters and the fish moved on to another location.

Cabo Climate: Air temps varied from 79 nights to 95 daytime highs and a 79% humidity level. Full moon on July 31, 2015. Mostly sunny and hot days with intermittent clouds rolling through, but very easy to sunburn.

Sea Conditions: Surface breezes flowing mostly from the westerly directions that varied from near-calm to 14 mph.

The Cabo San Lucas shoreline, out to the 1000 Curve and northerly to Los Frailes, was all in the 86 to 88 degree ranges. Greenish colored water was found from location to location throughout the fishing days but seemed to change every day.

Best Fishing Area: Seems like the better fishing was in the area that ranged from Gray Rock, (aka Cabeza de Ballena) and outside to the Herradura, (aka Horseshoe).

Best Lure/Bait: Seems like the best action for the blues was on the artificials while the stripers and sailfish preferred rigged baits better and an occasional fish was taken on live bait. …Larry Edwards, Cortez Charters
Expand signature
Today is tomorrow's "Good Old Days" Gary Graham [email protected]