Fished with my boat partner Frank who set the trip up. Neither of us had been to Loreto before. There was a Volaris special and a Loreto Bay Hotel special as well that we took advantage of. The flight was easy going through CBX/TJ. The place was deserted and virtually no lines. Quick 1.5hr flight down on a full flight. We both carried on our cooler bags and checked 2 bags as well. Got a shot of Cedros on the way. Stepped off the plane and was greeted with 93° temp. 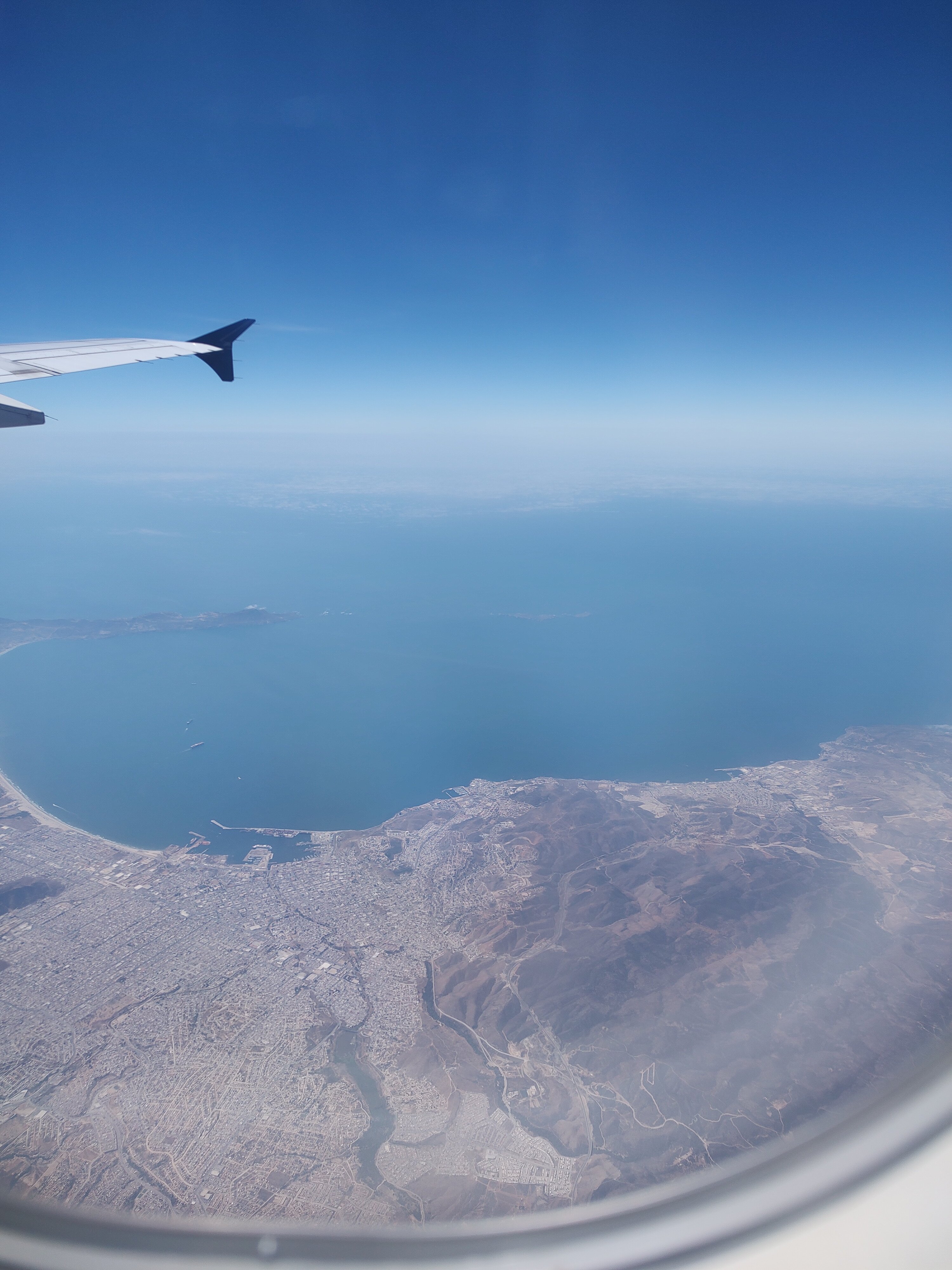 We took a taxi over to Loreto Bay Resort and checked in. Gave the lady checking us in 400 pesos to make sure we got a nice room with a view of the water. She was uncomfortable and tried to give it back. They never do that in Vegas? Anyway, I said keep it and give some to the bell boy. As for the hotel, it's nice but not 5 star like they say. Maybe 3 star. Rooms were clean, beds were comfortable and good overall first floor room. Grounds we're nice but some of the lounge chairs around the pool were torn and there were no lounges on the beach by the palapas. We just carried our cooler down to the shore and sat in the water drinking beers and watching the pelicans dive on the schools of bait fish all around in the shallows. We fished Friday with Juan from Mojito Sportfishing. He picked us up on the beach at the hotel. He brought a cooler with beer, water and burritos for lunch. He had two small live wells with Sardinas for bait. His panga was well equipped with Shimano Speed masters for trolling and a couple of two speed lever drags for bait fishing. We trolled some feathers around Isla Danzante. We started off with some Skipjacks on the troll. Paciencia, Juan kept saying about the Dorado. We kept trolling and kept getting hit by Skippies. They became a nuisance after a while. Around 0830 we got our first Doritos and Juan released it. We had plenty of fishing ahead of us. We trolled pretty close to the island and started hitting the Dorado mostly on the troll but a few on bait. 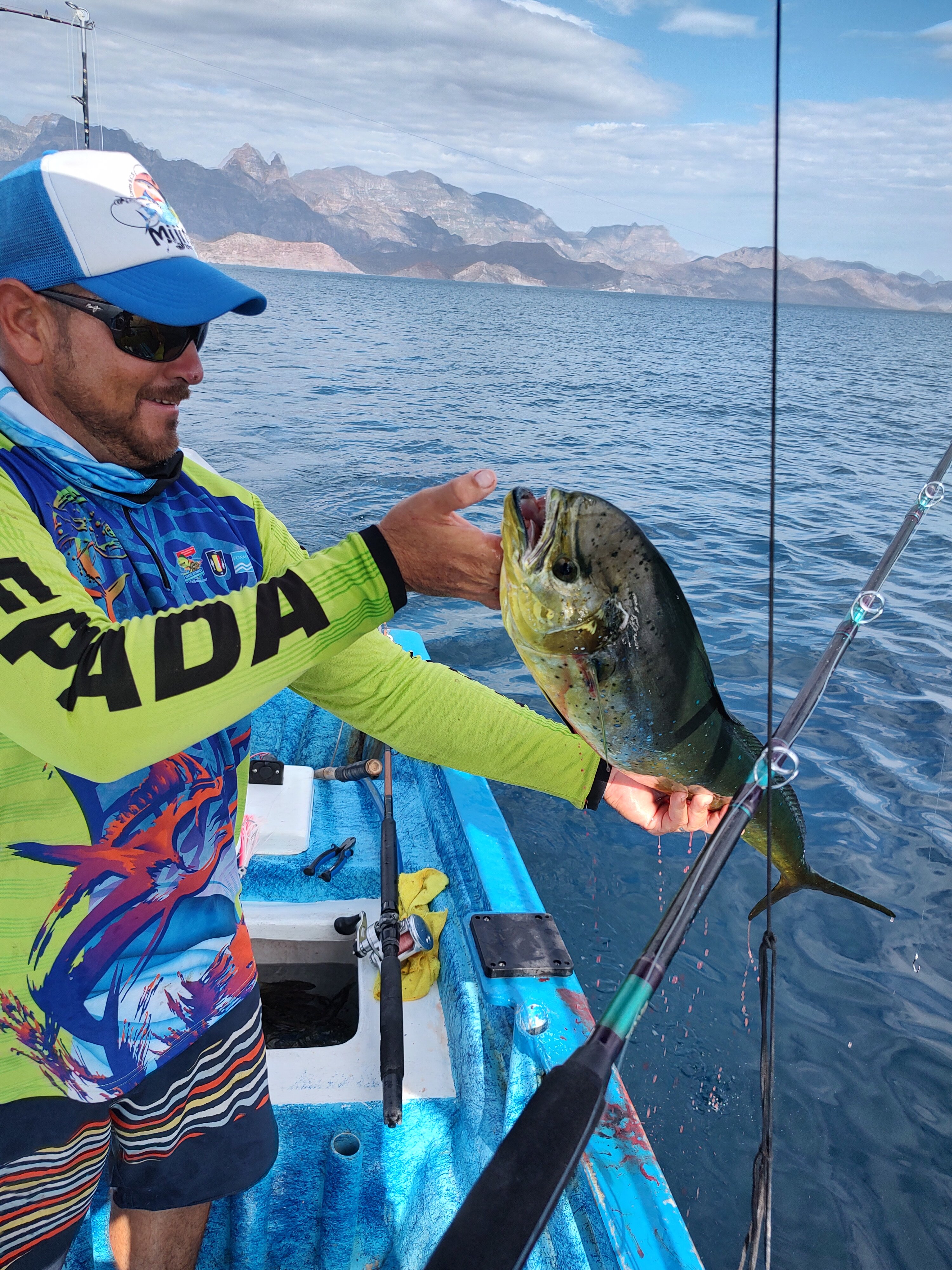 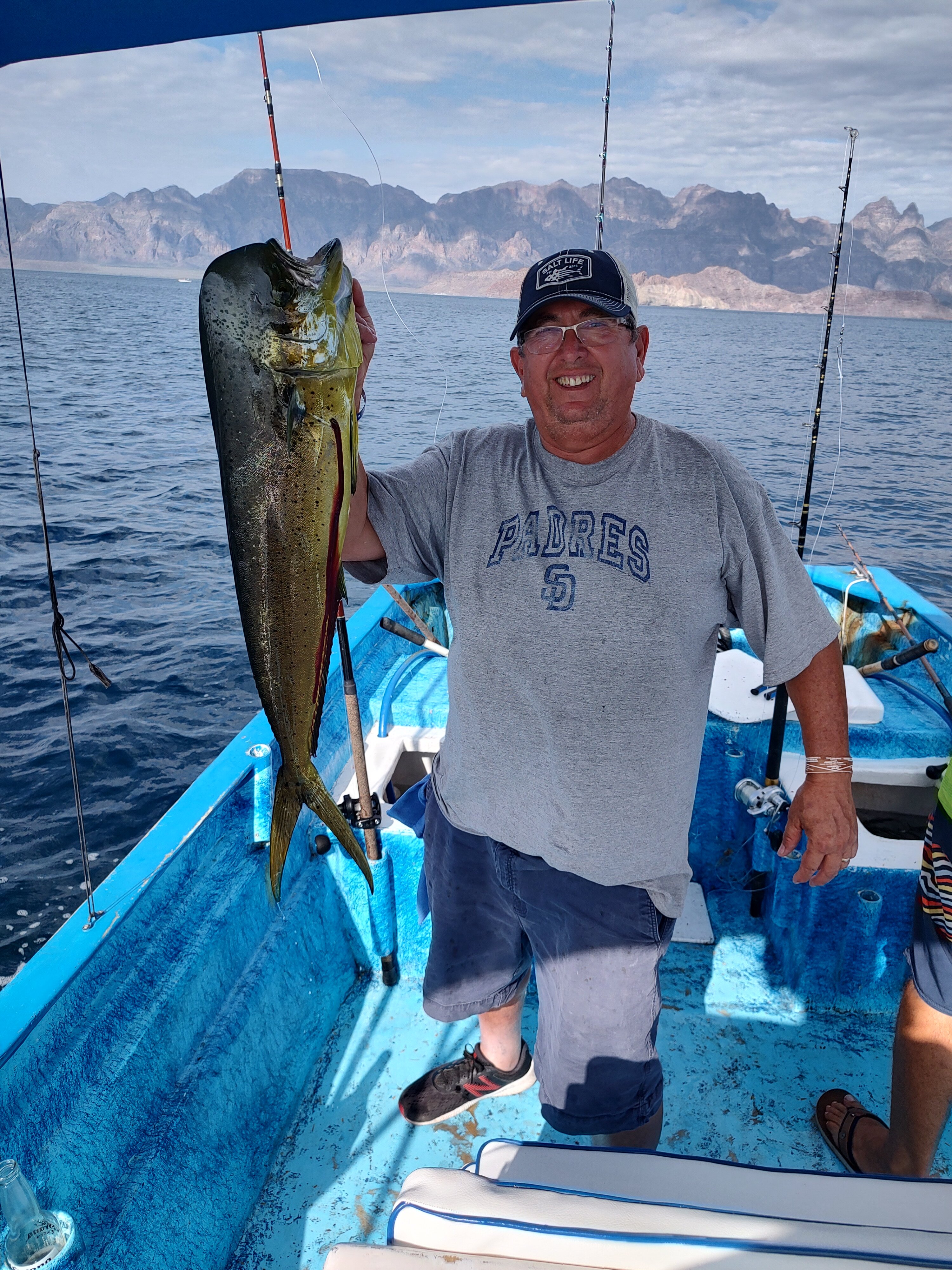 With a standout Dorado in the bag we picked on the troll and started hitting some exotics on the feathers. Frank hooked up with a fish that was working him hard. Turned out to be a nice Jack Crevalle. It about wiped him out especially since he had his knee replaced in May. With the Jack safely released we kept at trolling the feathers. Beautiful conditions all morning and the paciencia kept paying off. We headed for Isla Carmen and started working our way north. This time my troller got picked up and it was another tough battle. It wasn't jumping so we knew it wasn't a Dorado. It was pulling hard and taking line.. maybe another Jack? When we finally get a look at color Juan yells Rooster! We continued north and rounded finished our Dorado limit of 6 for the boat. We headed back to the marina where Juan had a taxi waiting and the fish would be delivered to the processor for filleting, vacuum sealing and freezing. We stopped there to pick up a filet to take to a local restaurant for them to prepare it for lunch. Jesus picked us up at the marina and Juan took the fish bag to the processor. We headed over to pick up some fish to take to the restaurant. The processors place was pretty primative but Juan said they do a good job so we trusted him. We grabbed a filet and let them do their job. We headed to Mi Loreto where the chef said he would prepare the fish three ways; traditional beer batter deep fried, grilled with crunchy garlic and grilled with a spinache cream sauce with cheese. Drinks to start of course. Some cold refreshments after a long hot day of pulling on quality fish. Juan did an outstanding job of releasing, gaffing and even baiting your hook. His gear was good and his boat well equipped. Great report! Thanks for sharing. fished Loreto once before and love it there.
Reactions: Tunahead
Upvote 0

Sounds and looks like you had the town to yourselves! I got to go back there soon.
Toggle signature
Never let the truth get in the way of a good story!

Ah Loreto.... my first Mexican Love. Went there for years and still have great stories from those days. Sounds like you guys did great. The picts and this post is pretty good brother. Made me remember why I love that place. Dorado... jacks... roosters...YT....cabrilla... and an occasional marlin or sail in the late fall. How can that be bad....lol. Thanks for posting Brother.
Reactions: Tunahead, Cubeye, lougio and 1 other person
Upvote 0

Love that place, still dream about Mc Lulu’s fish tacos. Probably the friendliest place I’ve ever been, even the cops were friendly
Reactions: lougio, 7emptsT and woodfish330
Upvote 0
M

Thanks for posting I enjoyed the read! I've been looking for a place for my Dad's 75th bday what time of year is best down there?
Reactions: woodfish330 and lougio
Upvote 0
M

Mateo el Flaco said:
Thanks for posting I enjoyed the read! I've been looking for a place for my Dad's 75th bday what time of year is best down there?
Click to expand...

ok let me rephrase - if you had to choose from Gonzaga Bay, LA Bay, Loreto or La Paz area which would it be?? Thanks!
Upvote 0
W

LORETO....hands down. The feel of a big town... without the crowds of LaPaz. More amenities than Gonzaga and LA Bay. Better fishing. Your dad would love that place.

One other thing I love there is this....EVERYONE goes fishing in the morning. On the "right" days....I will opt to hit the water when most of the other anglers are back onshore. Afternoon fishing... and into the evening.... totally awesome. You just have to find the right Pangero...who's willing. Ask around... many will take you for a."split" day.... 4 hours in the morning... lunch at the hotel...little nap... afternoon fishing if not too windy. My favorite.

woodfish330 said:
LORETO....hands down. The feel of a big town... without the crowds of LaPaz. More amenities than Gonzaga and LA Bay. Better fishing. Your dad would love that place.

One other thing I love there is this....EVERYONE goes fishing in the morning. On the "right" days....I will opt to hit the water when most of the other anglers are back onshore. Afternoon fishing... and into the evening.... totally awesome. You just have to find the right Pangero...who's willing. Ask around... many will take you for a."split" day.... 4 hours in the morning... lunch at the hotel...little nap... afternoon fishing if not too windy. My favorite.

cool thanks for that I'm going to look into it!
Reactions: woodfish330
Upvote 0

Nice report. Thanks for sharing. Did you post #2?
Upvote 0

No, I got lazy.
Reactions: woodfish330
Upvote 0

Hi guys. I just joined the board, so first post. Appreciate the pics! I was down there the following week and caught several dorado and roosters, all small to middling. I'm dragging a center console down at the end of the month and will keep it there indefinitely for quick and easy access to the fishing, etc. I've got a 2nd home in Loreto Bay, so I'll post up reports on occasion.
Reactions: lougio, Bien Machin, woodfish330 and 1 other person
Upvote 0