Hi All,
Late report, but wanted to make sure I share my experiences and things I learned from my trip down to Loreto last week.

Me, my dad, one of my friends, and a group of 11 other older gentlemen left LAX on Sunday around 1pm. I had called Francisco "Pancho" Barracuda about a month ago and reserved his boat for fishing on Monday and Tuesday. Once we got to the hotel, I gave him a call and we confirmed that he would be taking up to 3 of us out the following morning at 6am.

We fished with him back to back days. The dude was absolutely amazing. Great attitude, a good family man, and a die hard fisherman. He had a shitty old beat up 24 foot superpanga with some cheap fishfinder & oldschool basic gps unit, but a new 175 horsepower motor in the back, 2 bait tanks, a retractable canopy, and plenty of seating. Huge plus for comfort!!!

We left at 6am, met with his cousin just outside the marina and picked up at least 30 large mackerel (man i wish we had those here... absolutely beautiful bait for big bluefin and yellowtail) and 10 pieces of smaller sardines. We shot straight out to the north of Isla Carmen and started fishing a 300 foot reef off the bottom. We got one skipjack, a bonito, got a couple of short bites on the mackeral from what he said were snapper. Things werent looking good, so we headed out to deeper water to get some deep water grouper. Bottom fished for 2 drifts in 550 feet of water and came up with a 10ish and then 20ish pound grouper, and 2 big red rockfish both around 10 pounds. While my uncle was winding up the second rockfish, I see a free swimming dorado and we shoot out a sardine and its game on. We land the dorado and decide to troll around. We find a current break with milky bubbly water thats lined up for over a mile, just a few minutes after leaving the deepwater spot. We get hit on a blue/white weighted feather, and while winding in, we find the school! We put 5 more on the boat within 20 minutes, all on the live sardine, and head back to the marina while enjoying some cold cold beers under the canopy.

When we get back, Pancho offers to take the fish to his house to fillet them. He invited us to come with him, but my uncle wanted to go back to the hotel. So we took a cab back to the hotel while Pancho trailered his boat back to his house, filleted the fish, then drove 20 min to our hotel and dropped off the fish, where the hotel staff would further clean and cook up our catch. Ceviche, tacos, and fried fish were on the menu on day 1. Little did we know this would be dinner for 3 back to back evenings hehe.

Day 2 was more of the same, but this time the rest of the group decided they wanted a piece of the action, so Pancho set us up with 4 pangas with his 2 cousins and his uncle. Of course, I got to fish with him again.

All of our boats did alright. 1 boat had 3 dorado, the other 2 dorado and a hammerhead that they unhooked at the boat, the other had 1 dorado. Me and my friend Shawn, with Pancho, hooked 13 fish and brought home our limit. This time, we didn't find a current break OR a school. But, it was 1 dorado every 5-10 minutes on the troll. No more than 5-10 minutes of downtime during that hour. Really Good Stuff!!

A few things I learned from this trip:
1) There are people who fish with cheap, literally big-5 style gear, thats seen saltwater for years. Gear has always been super important to me, and while it is super important for catching big tuna and big game fish and it increases your chances of landing that trophy fish, it is only a luxury and not necessarily needed.
2) Don't be afraid to use big 5/0 hooks on rockfish. They have really big mouths and you can sort through the smaller ones and focus on the big ones by using bigger hooks
3) TRUST YOUR CAPTAIN- the one boat that didn't listen to the captain got only 1 fish, while we hooked as many as we wanted and left em biting. The other 2 boats that did "ok" didn't want to go as far as we were planning on going, so they stayed a little bit short of the area that we went to. These captains are out there EVERY DAY! Listen to what they have to say, trust that where theyre taking you and the gear theyre using is perfectly dialed in for the type of fishing that they do every day. And PLEASE don't complain when you dont listen to the captain and then dont catch fish. Its not ok!
4) Exploration is FUN!- I had never fished the sea of cortez. I was expecting dorado, yellowtail, sailfish, wahoo, marlin, cabrilla, roosterfish, who knows what else!! But I was more than happy catching a few grouper and some rockfish. Were out there to fish new waters. If its rockfish and mahi then GREAT! Loreto is somewhere I've never been, and I would love to go back someday.
5) Focus on the positive, and don't let negative thinking hold you back- This was a fishing trip. All 14 guys wanted to fish when we were leaving LAX. When we got to the hotel, and I got the intel from Pancho, they heard that the fish were an hour drive out, and not 15 minutes out like they had initially heard, so they decided not to fish. They flew to Loreto and spent all that money to play cards and eat shitty food at a 3 star hotel. Lol. I feel bad for some of these folks. Theres so much beauty around em, yet they chose to focus on things that make em upset. Such a shame. Have a good attitude, and you will be sure to have a good time !
6) Loreto is MAGICAL- A small fishing village on the rise, a hole in the wall place, small population, no infrastructure, no 5 star hotels, no nightlife.... but, world class fishing and a certain beauty to it that words cant describe. Between the flat calm waters in the bay, the black sand beaches, the panga style fishing excursions, the tiny airport, etc, it really is a great get away. There is absolutely nothing to do here but fish in the morning(or golf if your into that), and drink/eat at night.
Thats all. If you plan on going there soon, feel free to message me with questions. I don't know everything, but I did spend 2 days with one of the best captains in the area, and asked a ton of questions about all sorts of things. So i might have some intel that could support you.
Good times!!!
Until next time,
-Aren 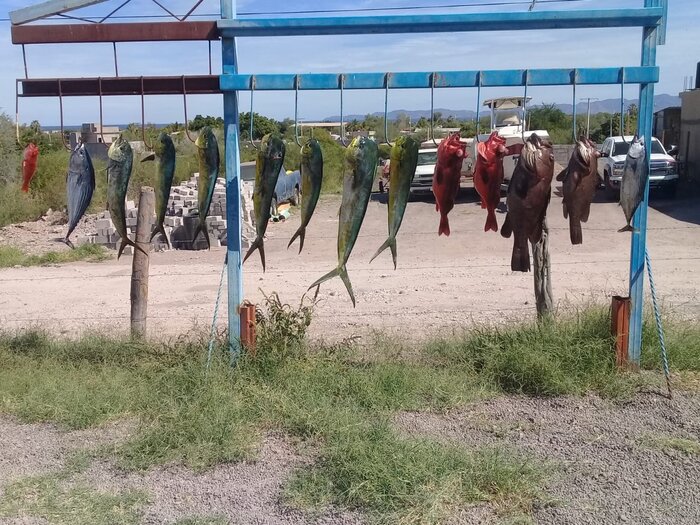 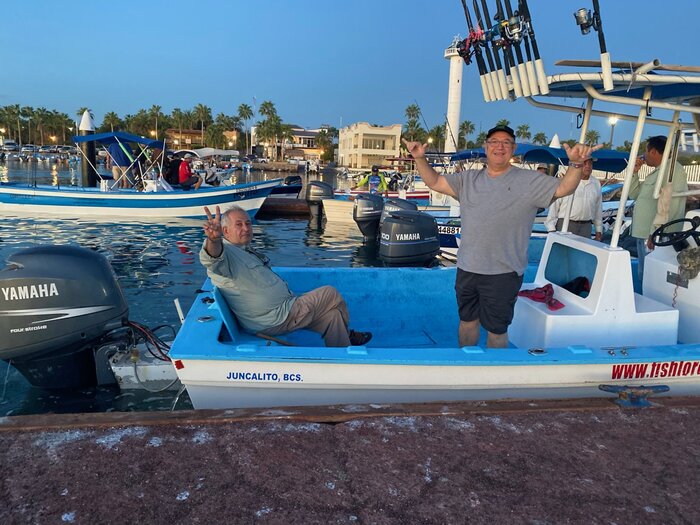 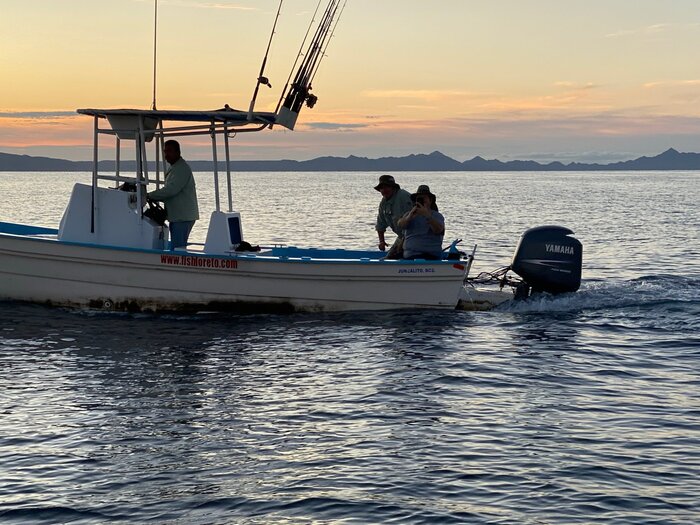 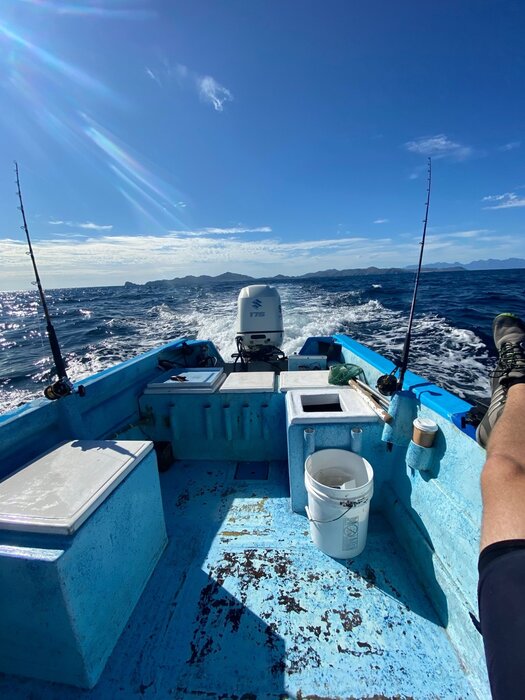 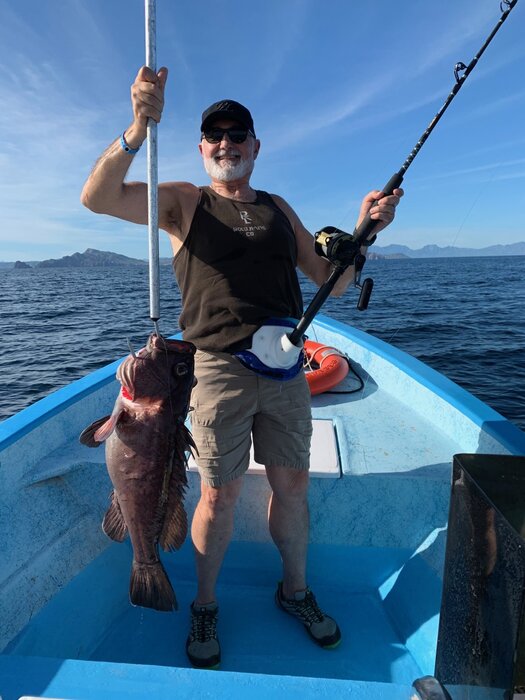 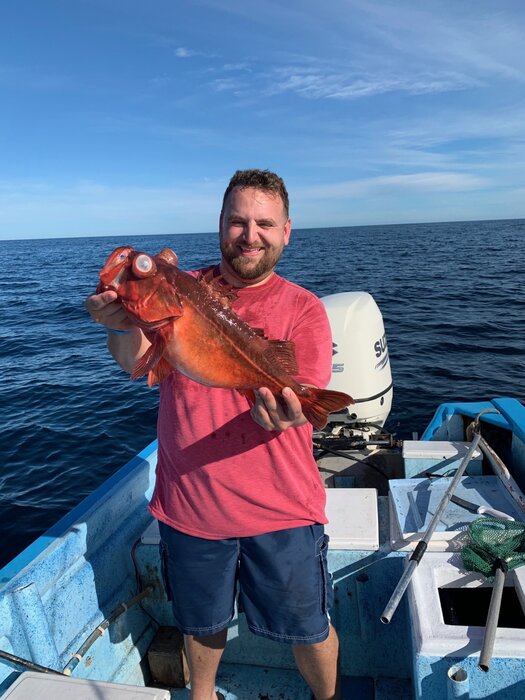 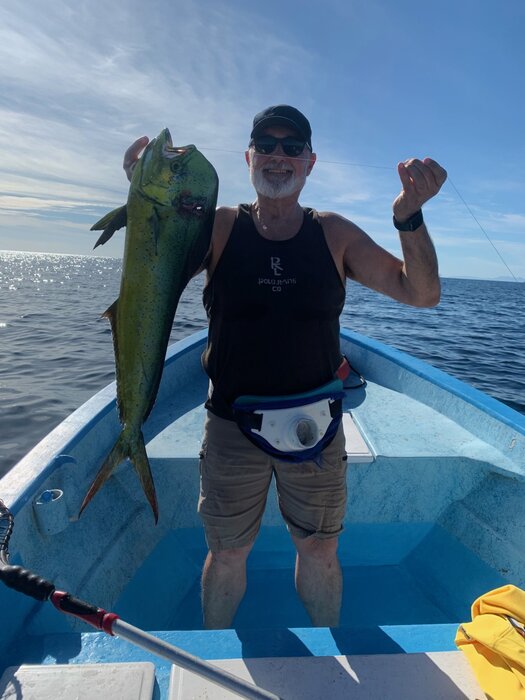 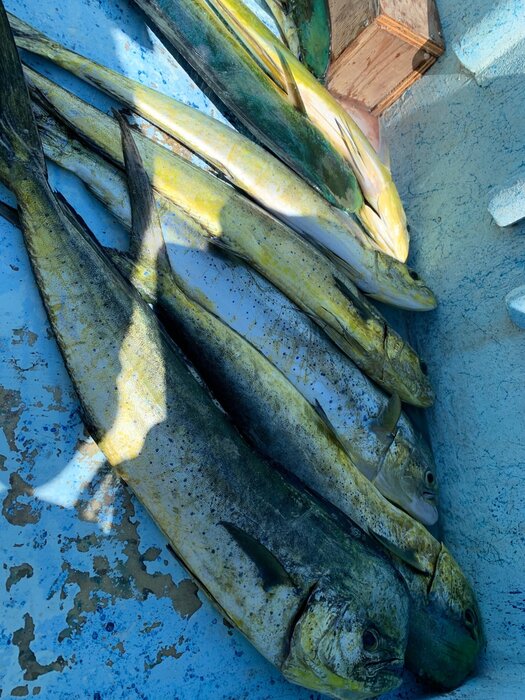 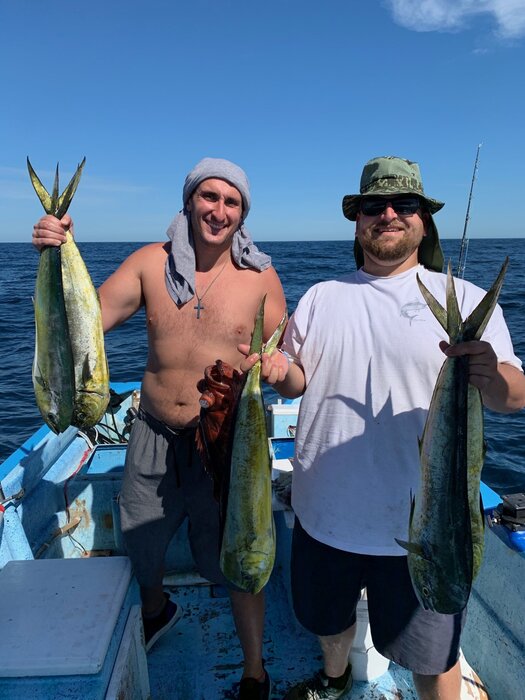 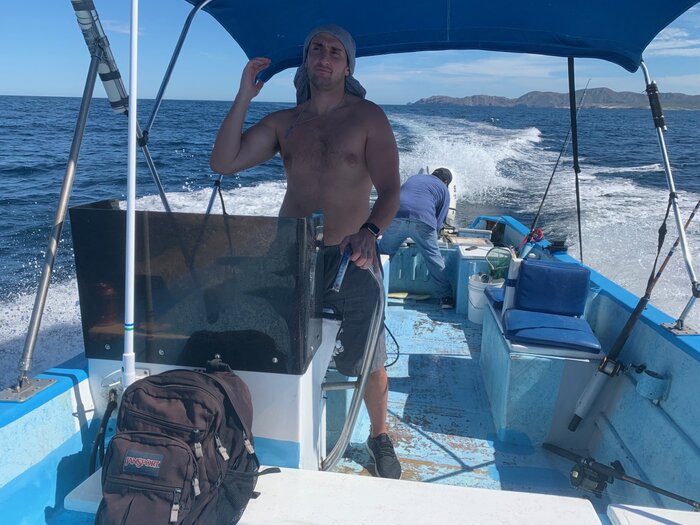 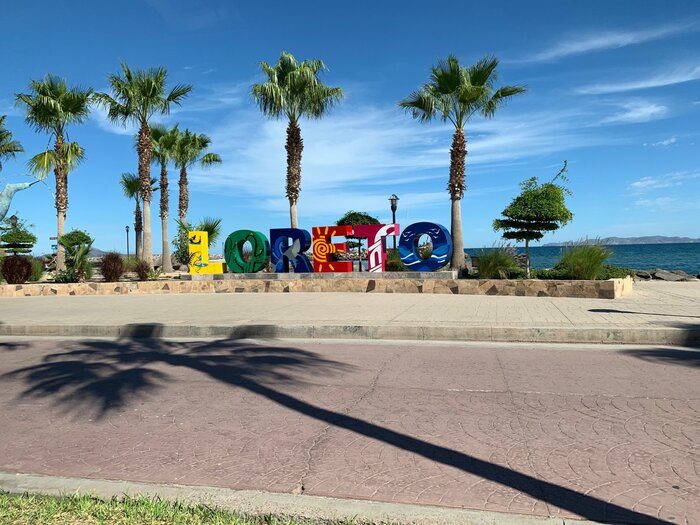 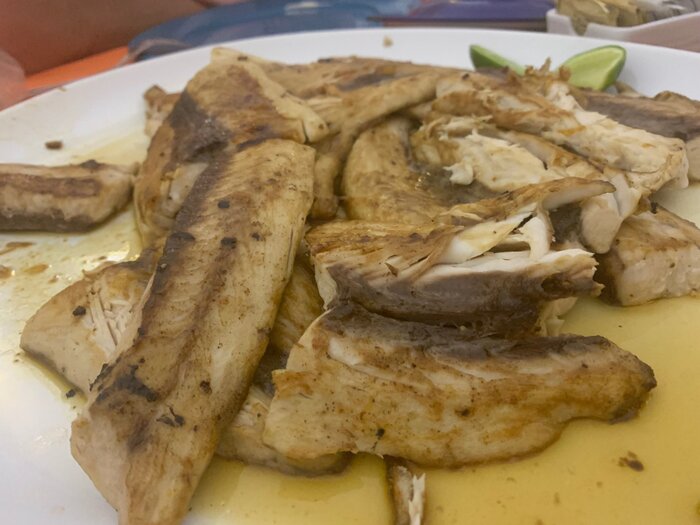 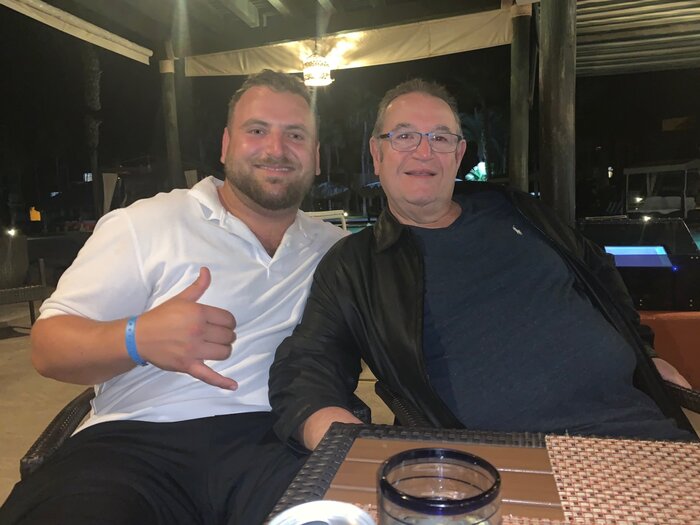 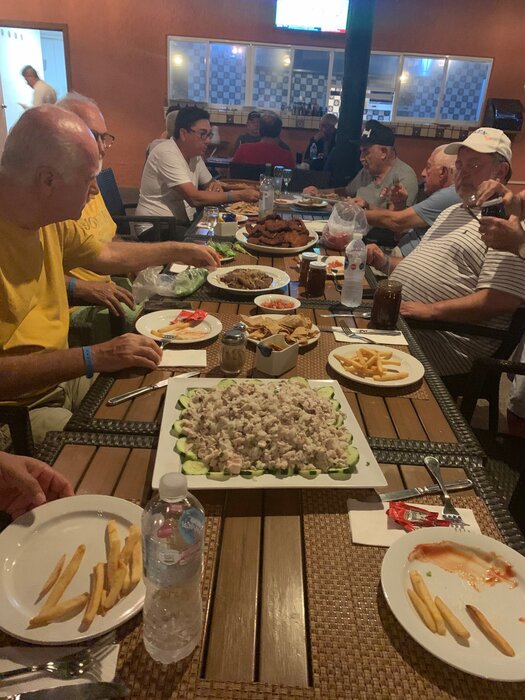 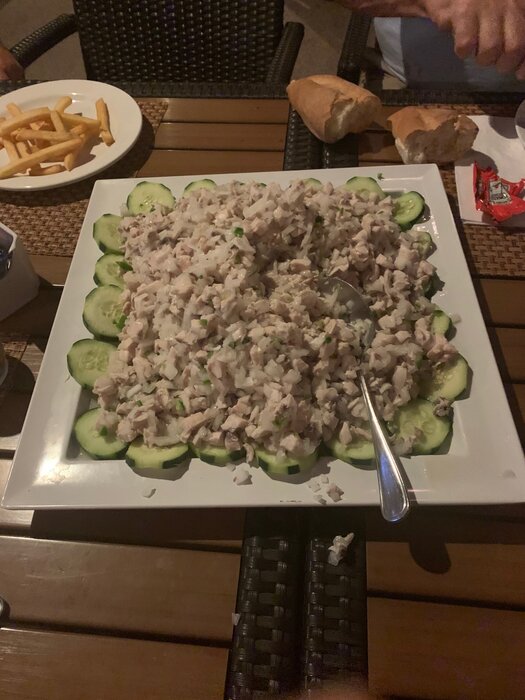 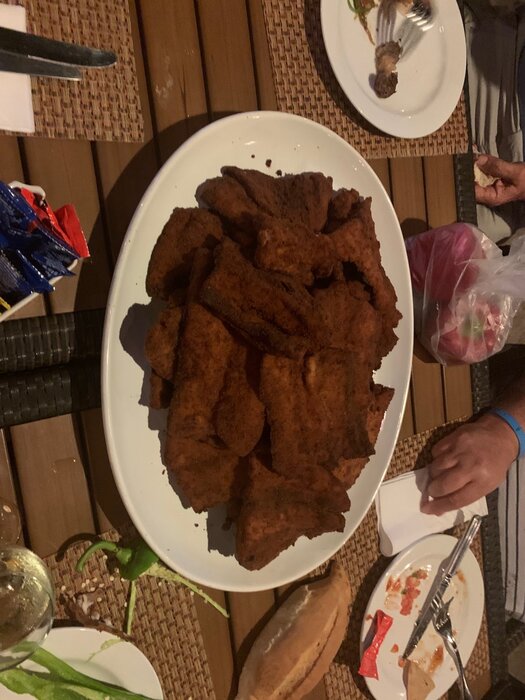 Nothing like a shitty old panga with a bad ass captain, willing anglers and bunch of dead fish

Where did you stay?
G

Good fishing! Those tan colored grouper you caught deep are real slimy but great to eat after cleaned.Down on the East Cape they call them estacudo. Nice work
Reactions: arenpilav41

bobrehfuss said:
Nothing like a shitty old panga with a bad ass captain, willing anglers and bunch of dead fish

We stayed at Loreto Bay Golf Resort & Spa. A bit north from the marina, it was a nice hotel but needs a lot of upgrades, both aesthetically, their kitchen and their staff. A few of the staff were really nice, wiling, and helpful, while a few of them sucked. The food and cocktails at the hotel were okay but nothing stood out. Its on a beautiful piece of land, but needs to be remodeled. It felt like their problem was that they don't have enough guests, so they can't invest into the hotel. There weren't more than 10-20 guests by the pool or on the beach at any given time. You can tell Loreto is still growing. I can't wait to see what it looks like a few years from now.
-Aren

Well, Loreto has had its growing pains and that’s what has kept it the quaint little town that it is. ”If“or maybe I should say “When” it blows up like cabo because the customer demand dictates the money to be invested then baja will lose another of its treasures to “progress”.
Reactions: arenpilav41 and RockHopperNCKA
Show hidden low quality content
You must log in or register to reply here.
Share:
Facebook Twitter Reddit Pinterest Tumblr WhatsApp Email Link