I took my friend Don Elm fishing at Catalina Thursday through Saturday. While getting ready to tow the boat, we notice the trailer lights are not working (even though I had just gotten them fixed and the brakes done on the trailer). The plug/wires look like they have been run over. We spend an hour trying to connect the 8 wires from the trailer to the 4 wire truck plug. Yikes! Settle for both running lights and driver side brake and signal and off we go. Barnys 1, common sense 0.

We pick up some large ‘dines and mackerel from Nacho and head to Avalon in pretty good conditions. We see the Long Beach Carnage pulling the hook and they have just sold their last scoop of squid. Thank you trailer lights! We head backside to the Vs and fish various spots for nothing. We see the Carnage setting up on the grounds. We're just about to bail, when we hear on the radio that they now have squid and we are the first to take on a scoop. Finally, a bit of luck - gotta love day-light squid.

So now we’re up tight fishing the beaches. Don gets an 8 inch halibut and we both get 2 pound yellows. Right species, wrong dimensions. The wind picks up to around 20+ knots and we decide that discretion is the better part of valor, so we moor up at Whites for the night.

Friday morning we are up early (for us) and head to the Isthmus. Slow trolling sardines between the MPLAs gets me a bonito and a nice barracuda, both released. Up next is our rock fish spot and as my first bait the hits the bottom, it is slammed by an 8 pound sheephead. Same size we caught here last time. Nice. We used the Rock-Release to allow various copper, olive and grass rock fish to live another day.

Just as I think the bite is slowing down I pick up a large red – the biggest I have ever caught. Don picks up a 4 pound sheephead, and then I get an even bigger red. I figure that is enough for a nice fish fry so we set up for lunch: Carne Asada and Pollo Adobado tacos. Yum!

We want to be out on the squid grounds that night so we head east and stop in Avalon to get some ice and beer. Just as I drop Don off on the pier, some locals in a skiff drive by and ask me what I am trolling for. Puzzled, I look up and see one of the rods in the overhead holder is trailing 500 yards of 20# mono – some of it wrapped on the prop. They graciously help me get most of the line back and I apologize for being a barny, and they laugh it off.

I still have line around the prop and I am wondering if I am going to have to go in the drink to get it off when I see the guys from Joe's Rent-A-Boat still on the dock having a few beers after work. I putt over and they help me get it cleared. The whole time there is a group of tourists that looked like they were from Asshole, Indiana staring wide mouthed from the pier. I hope they saw my plumbers crack while working on the prop. I tip the Joe’s guy $20 and get back at it. Barnys 2, Dignity 0.

We pull up to the Vs and set up in 70 feet. There are 3 other boats in the area and a few along the beach while we are breaking out the sea bass gear. After dark, more and more boats come barging through the zone. Seems like the whole fleet is going to be here tonight. We fish until 11 with no bites for us or anyone else. Then we go to the secret weapon: taking a nap. This does no good, with light boats and big sport fishers putting out huge wakes pounding the boat. At 1 AM I can’t take it anymore, so we limp around to Avalon and pick up a mooring to get a few hours of much needed sleep. Barnys 3, us as hard code fishermen 0.

In the morning we talked to a few boats and all of them said they did not hear of anyone getting any fish. I hope someone did. The ride back was not too bad, and we did get some nice fillets, so I guess I’ll chalk this up to experience. Good luck and be safe out there!

Me with the 8 pound goat. Sorry for the picture quality on some of these. 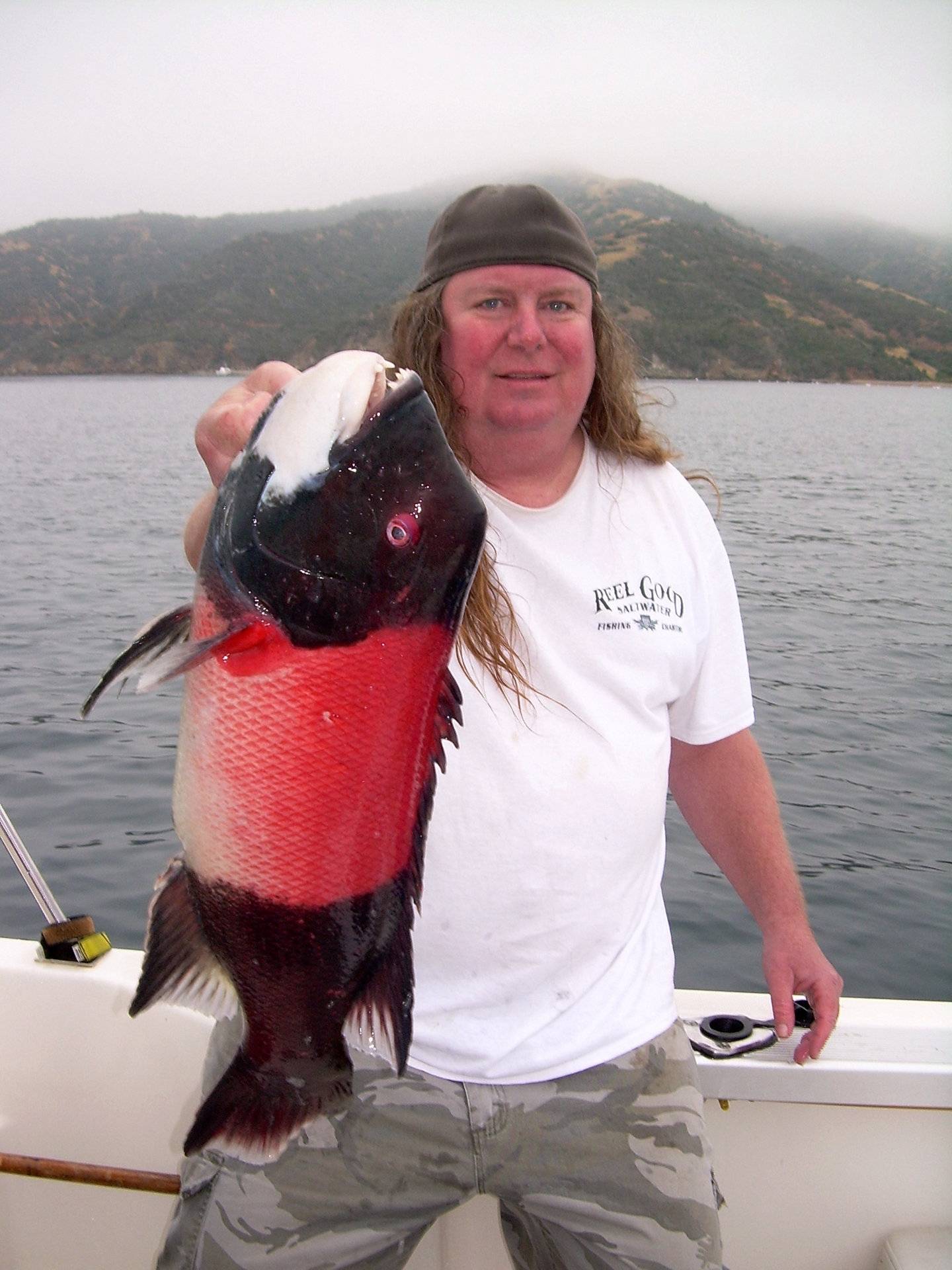 Don with the 4 pound goat. 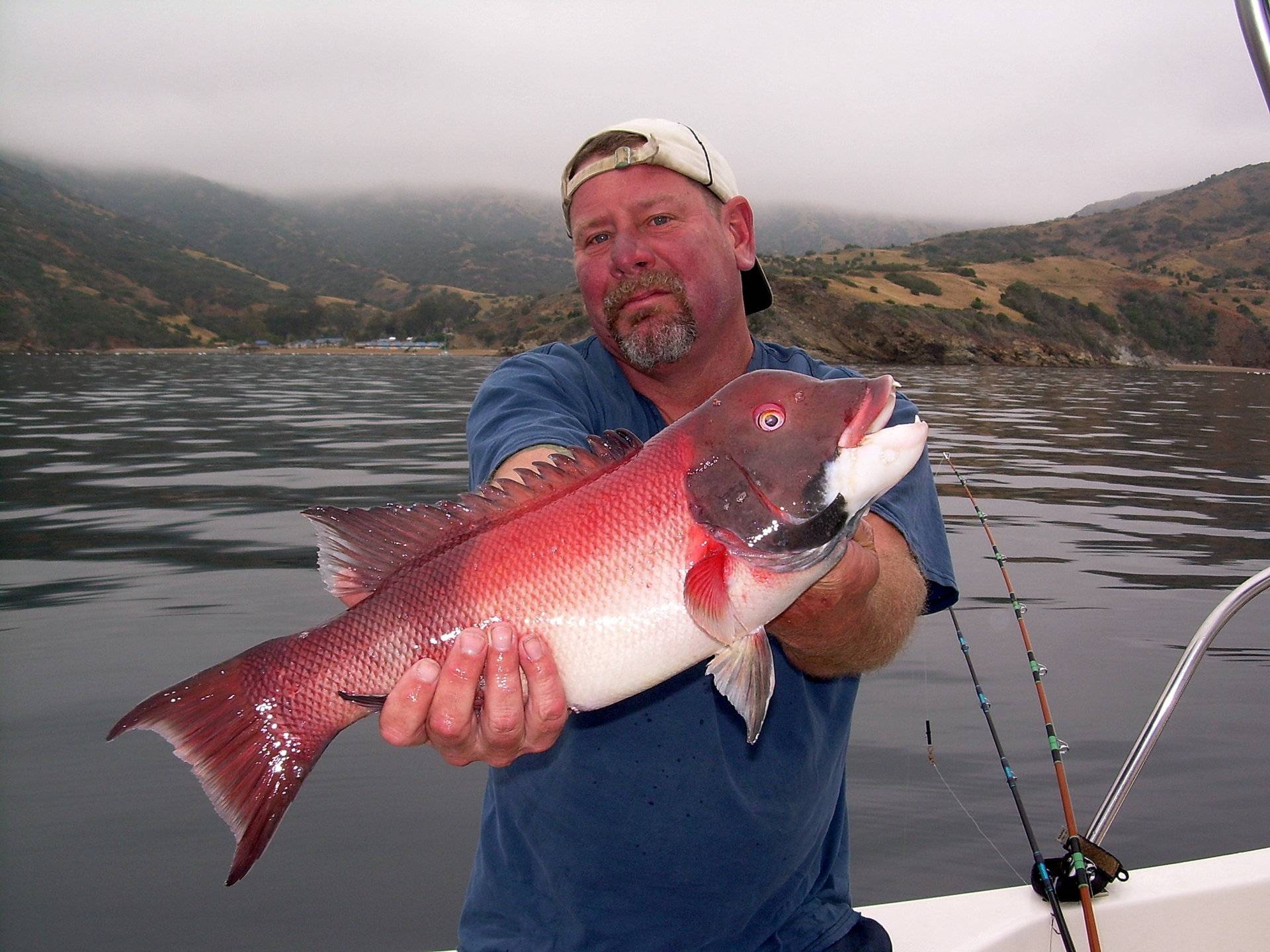 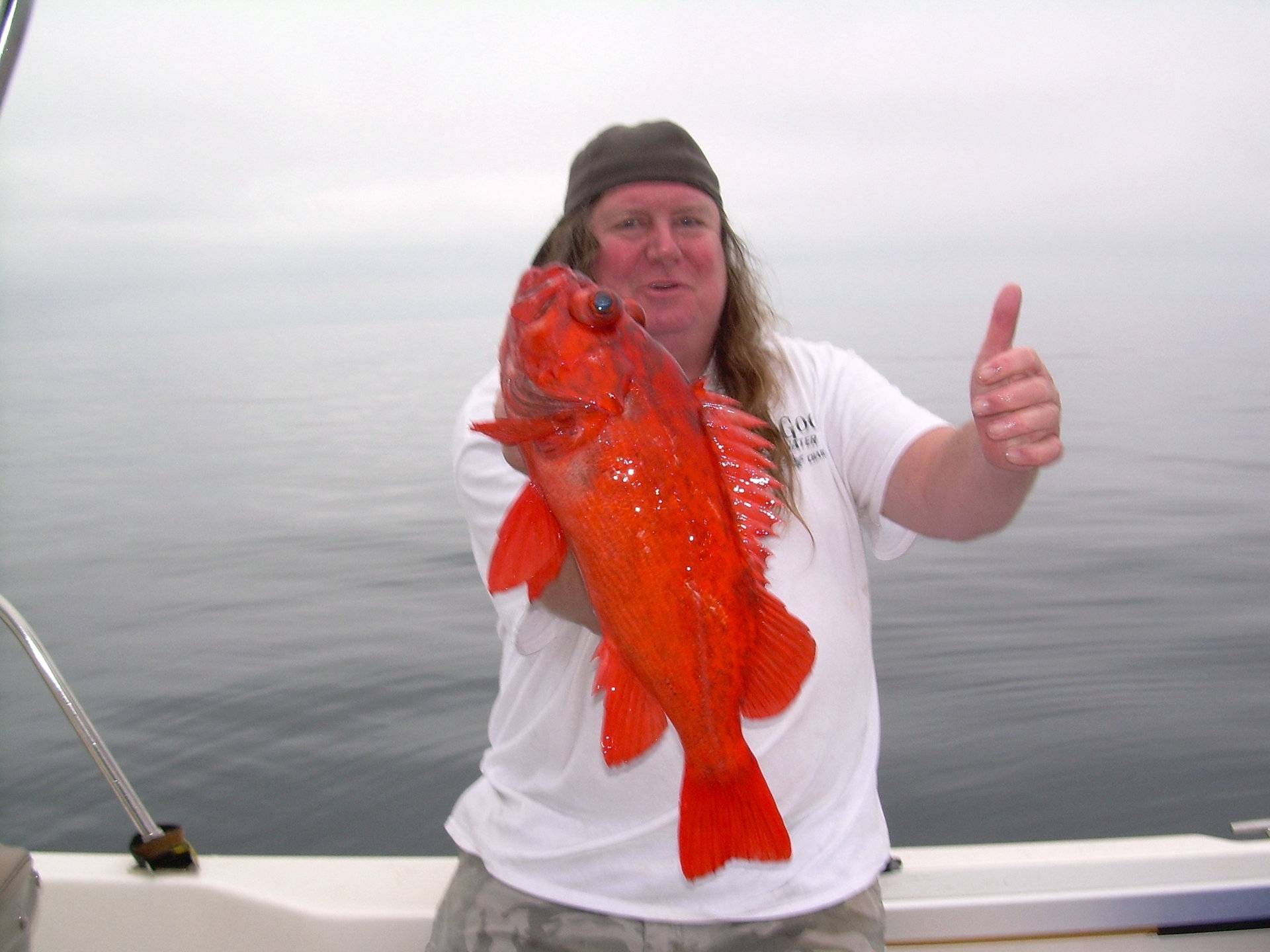 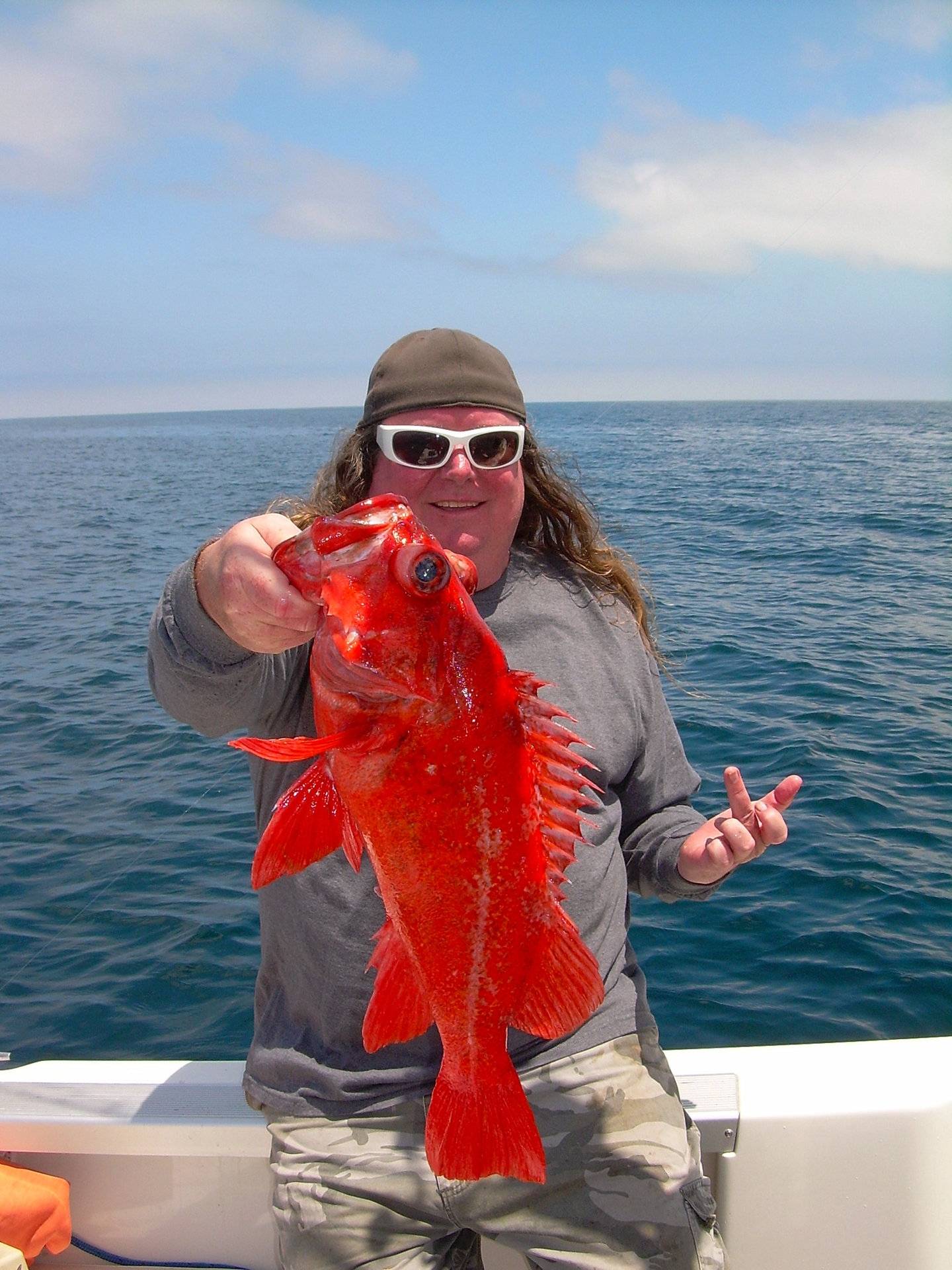 Cuda on the troll. 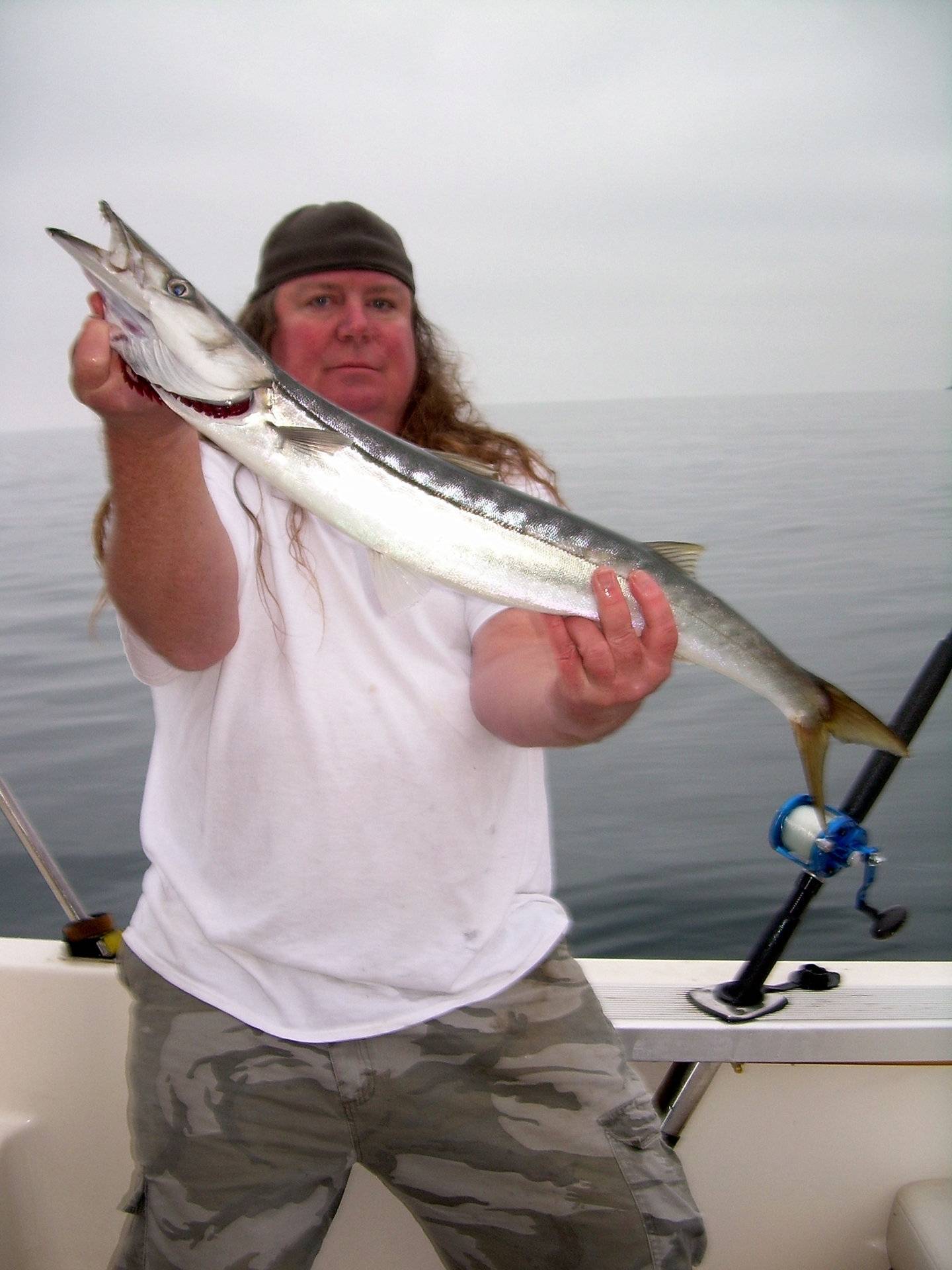 Reactions: MarktheShark56, Goleta_Slim, the SLIDER and 8 others

Way to hang in there. Nice Goat and Red.

Anyone ever tell you that you look like Kinison?

Sent from my XT1585 using Tapatalk

Now that is a great report. Loved your role in "Ford Fairlane" by the way.
C

haha good write up man! 'Right species, wrong dimensions.' cool you tipped the amigos for helping out, and glad i missed the plumber butt…..

Great read, thanks for taking the time to share your trip the good and the bad.

the SLIDER said:
Way to hang in there. Nice Goat and Red. Anyone ever tell you that you look like Kinison?
Click to expand...

Yes they have, and at least you did not notice my uncanny resemblance to "Meat Loaf" - although my girl friend seems to think I am better looking than either of those characters - poor deluded woman! Have a good one!
Expand signature
Go ahead, make my day...

Reactions: the SLIDER and rile-b-fishn