Offshore Long Over Due

Late post But had to share….
FINALLY had the chance to get out this year. My good buddy Shaun threw down an invite for me and my lady to go out on his 24’ scout CC. Had many a good trips with him on this boat before! Since I wasn’t racing this weekend, I couldn’t say no. Watched some UFC fights Saturday night and rolled out of Oceanside around 6am Sunday! Didn’t make it far before we ran into fish, they were up, then down and out fast. Kept moving a few more miles west and started picking up sonar marks. Shut her down and started hunting, was an hour or two before we got onto a small foamer but they wanted nothing of the Jigs. Decided to bump the boat in gear and drag a couple live baits on sinker rigs like a slow troll! Didn’t take long and connected, handed the rod to Stacey (my lady) and she fought it for a few and it came off. With no follow up bite sent em back down and back down and boat into gear, minutes later connected again. This time it met the galf 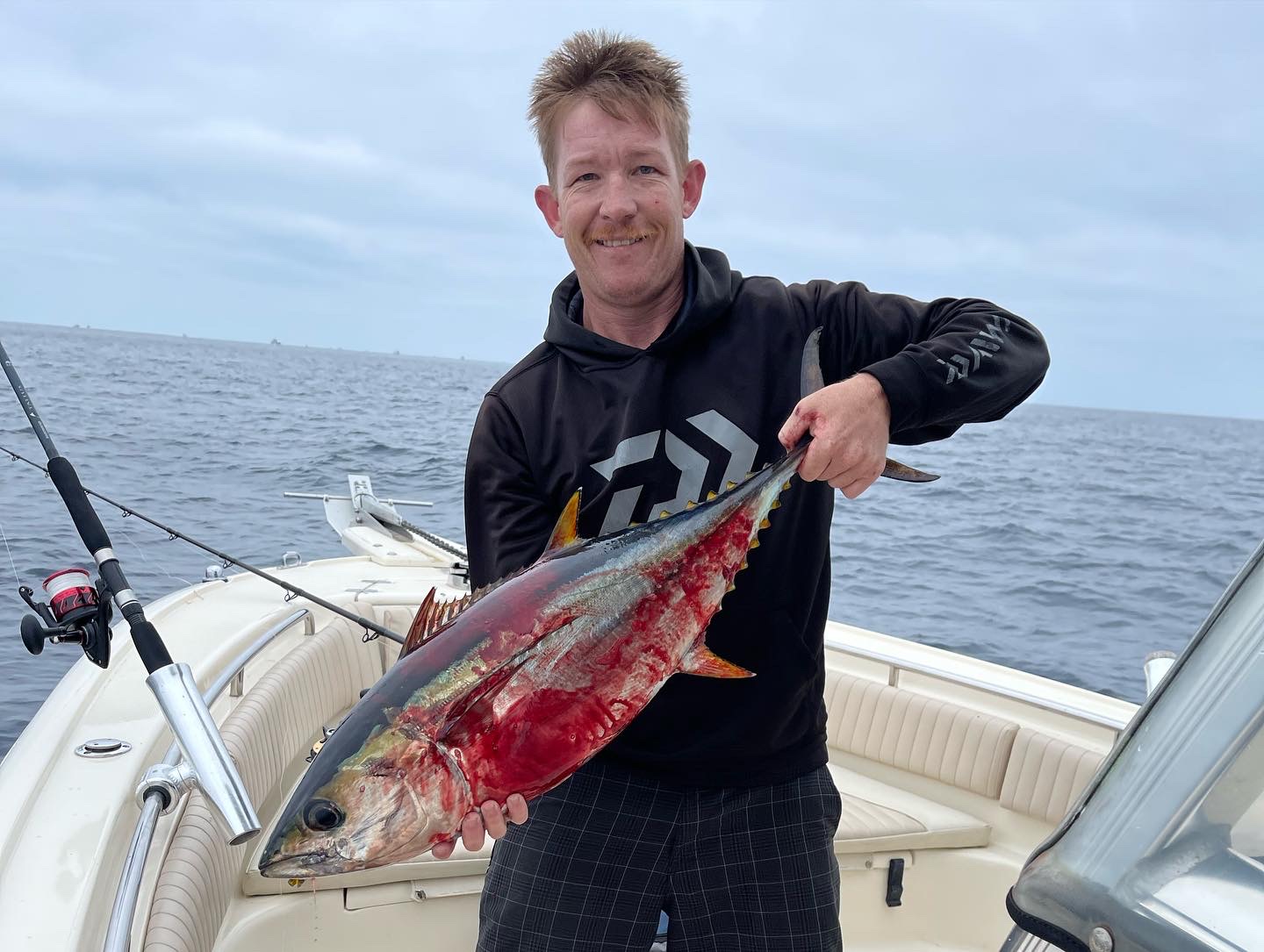 Since the fish on the surface seemed uninterested in jigs we put on some fresh baits and sent them back down! 20 minutes later the sweet sound of a screaming drag and clicker… 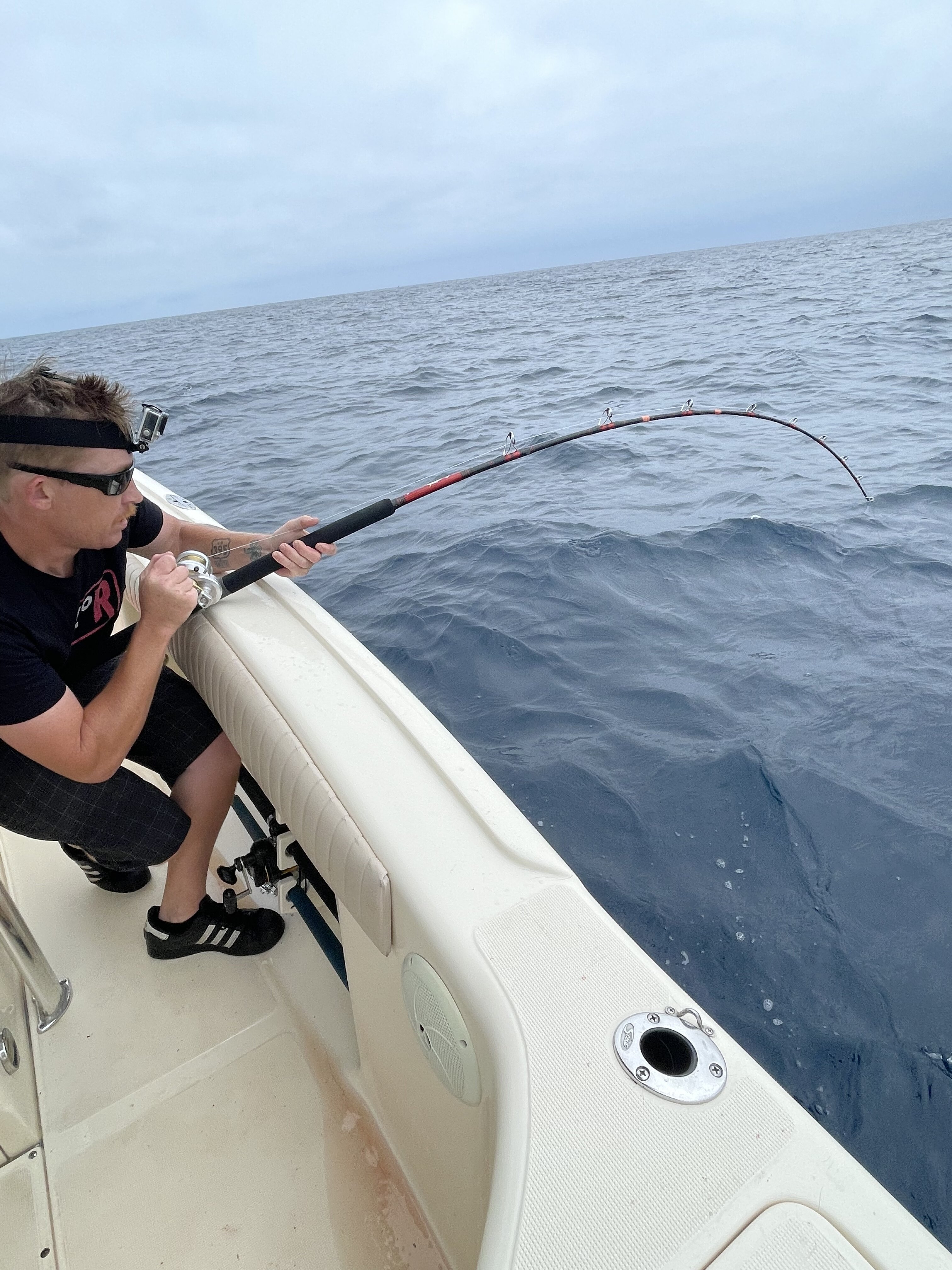 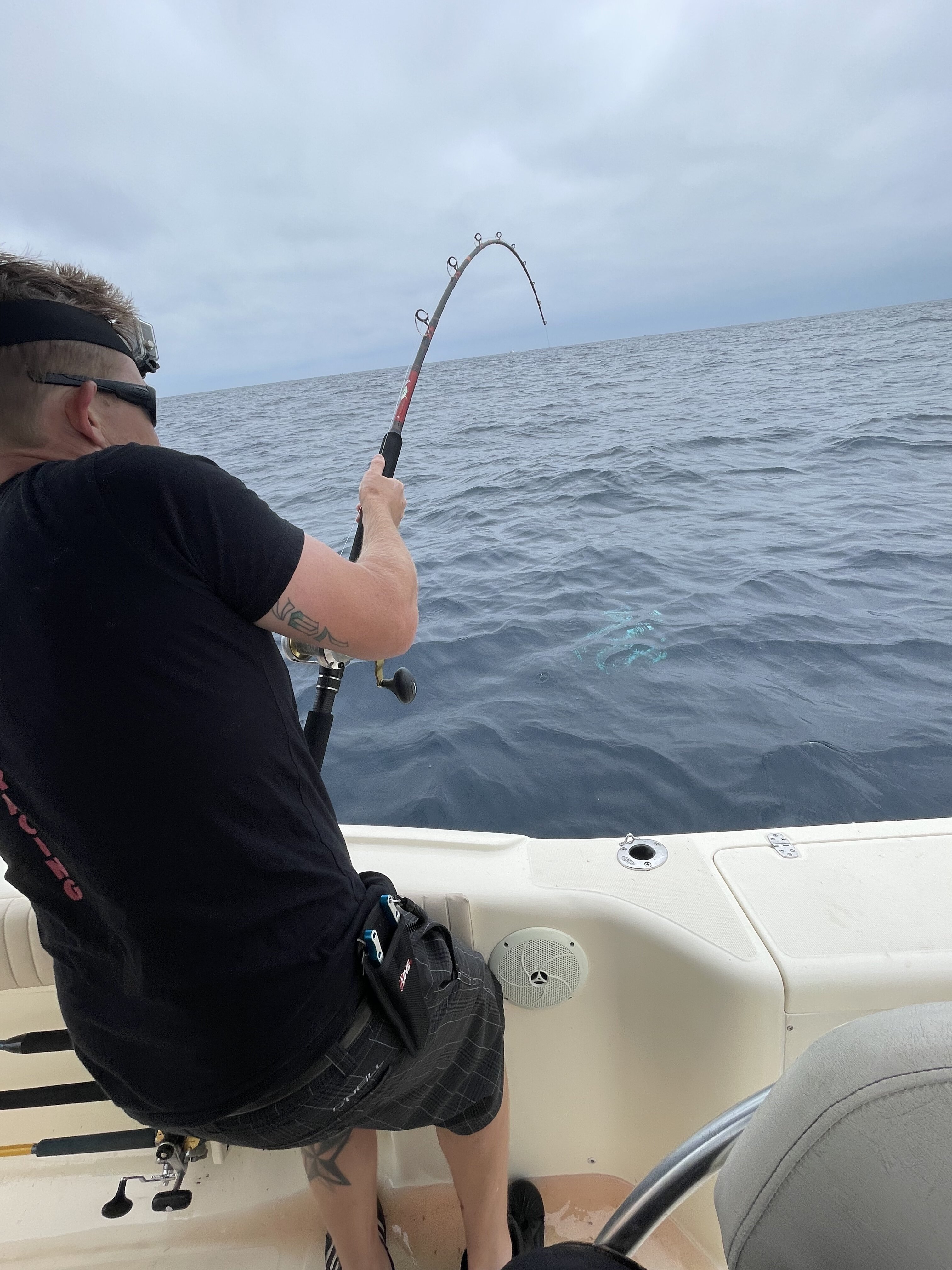 We know immediately it was a bigger fish, put Stacey on it who fought it on 40lb for arpund 20 minutes and did great but as it got near the boat it got wild and I took over. Another 15-20 min and after a hard fought battle the beast boarded the boat! 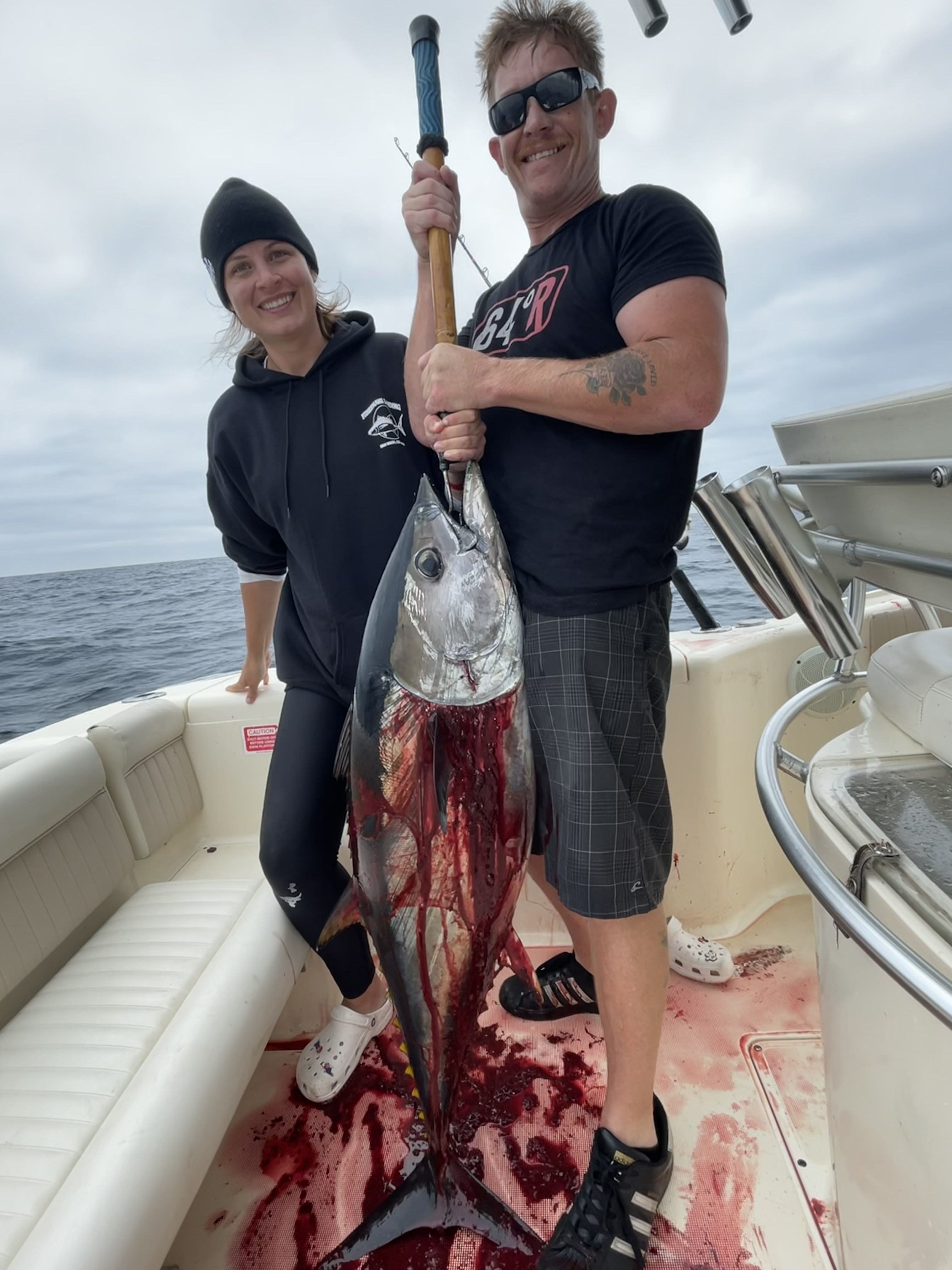 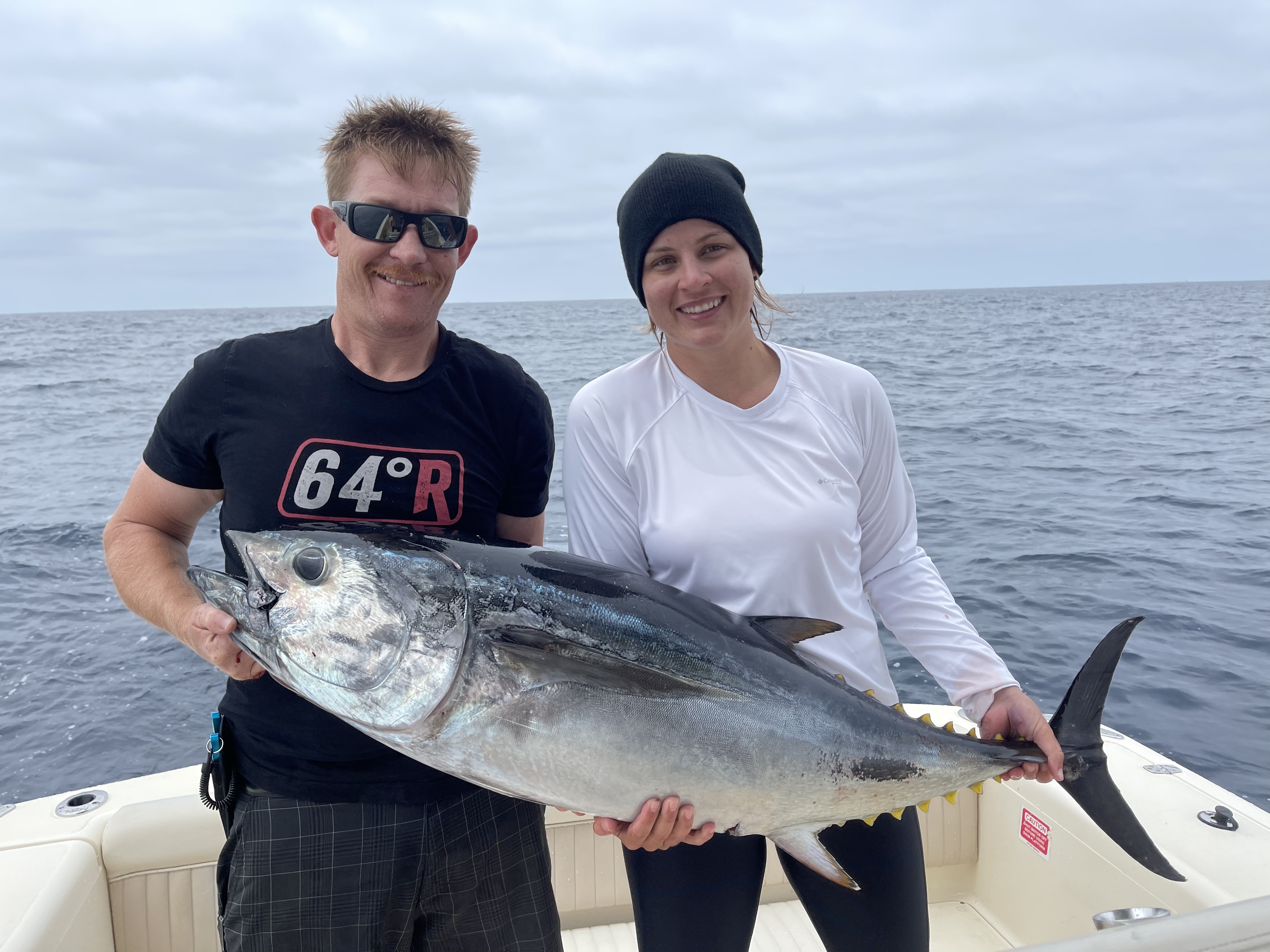 Solid fight, solid fish! Definitely got what we bargained for here. So I’ve been fishing for years. But I’ve only caught one bluefin in my past, didn’t know about the heart thing. And I know it’s true because I swear I’ve been cursed by these damn fish. Since I’ve felt cursed for over 10 years on bluefin I figured I wouldn’t make that mistake again. And convinced Stacey to do the same…. 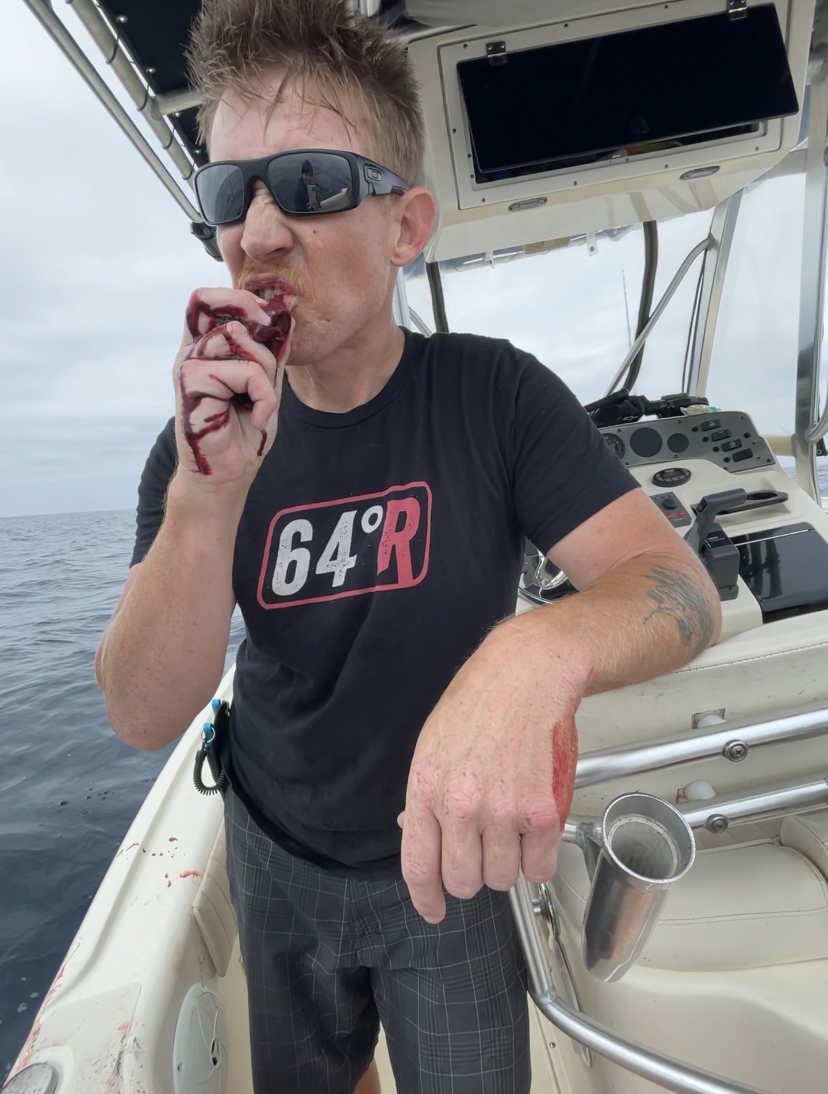 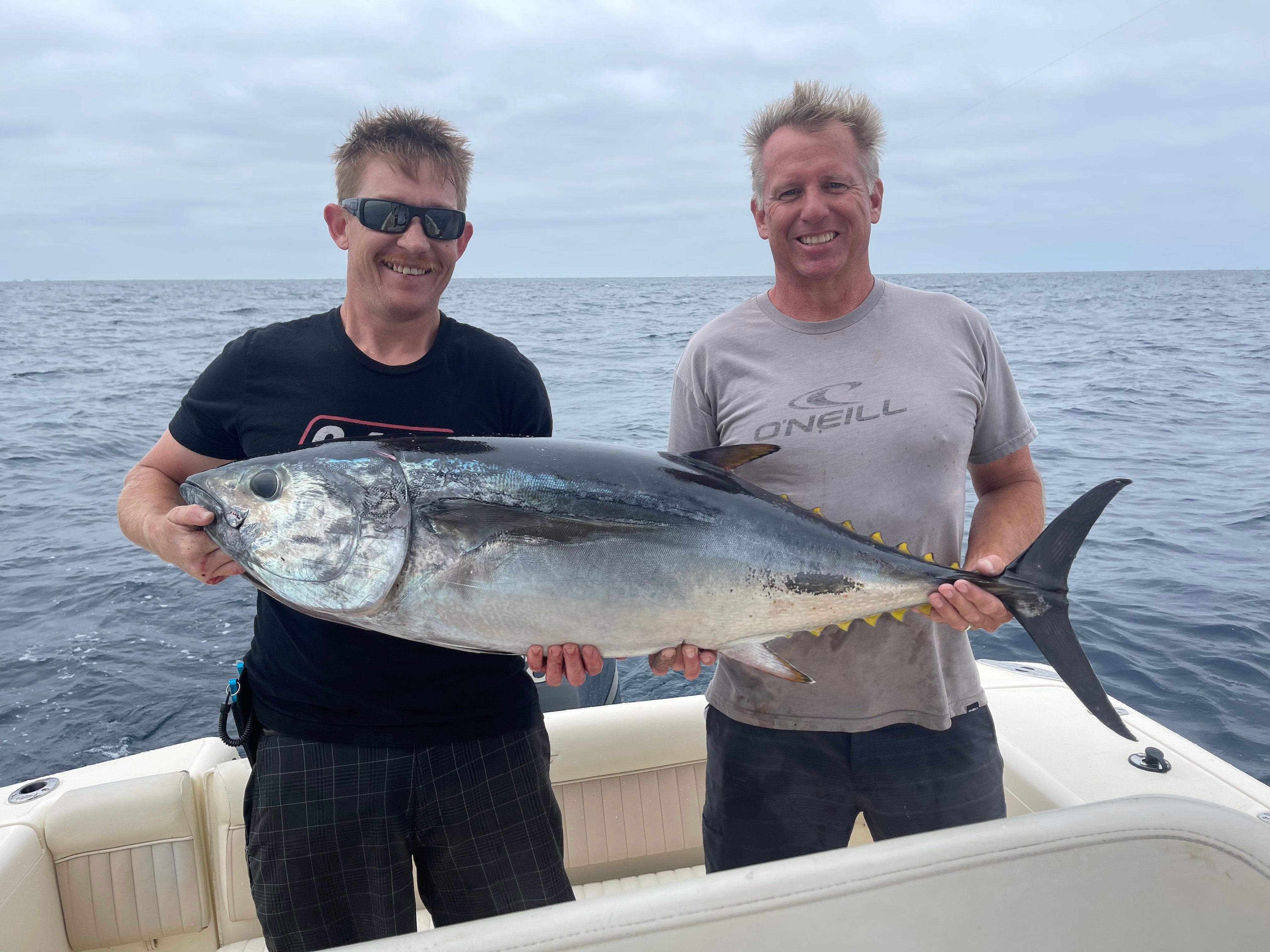 After some high fives, beating heart sashimi, a monster, and my legs and arms quit shaking. Back to work. Lots of fish around but as the day went on they got more weary. We had one more good foamer come up and stay up a bit and again wouldn’t toucha Jig of any sort, so as the sank out I butt hooked a sardine and tossed it out… maybe 2 minutes later BIT! I got the hook stuck in it and handed it off to Stacey! I felt like she needed to start and finish a battle with this one. She did a great job and fought it all the way till Shaun stuck the galf in it! 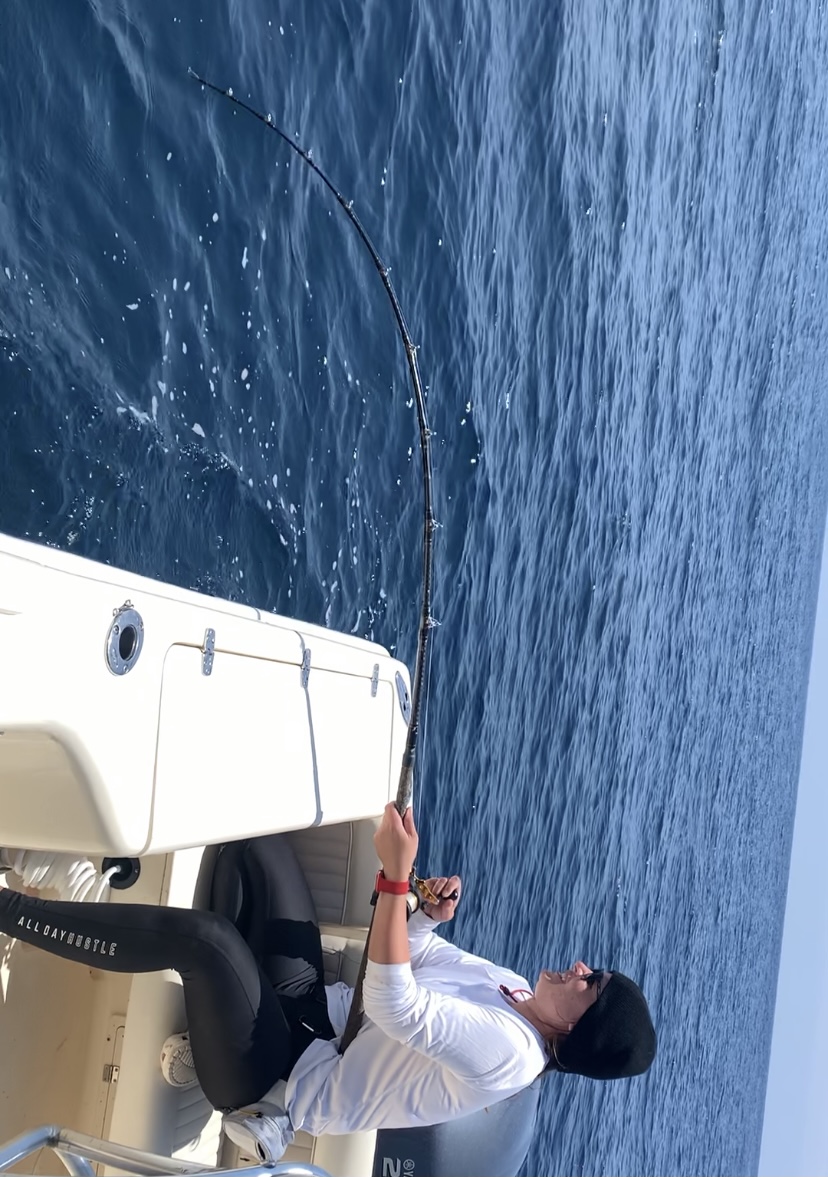 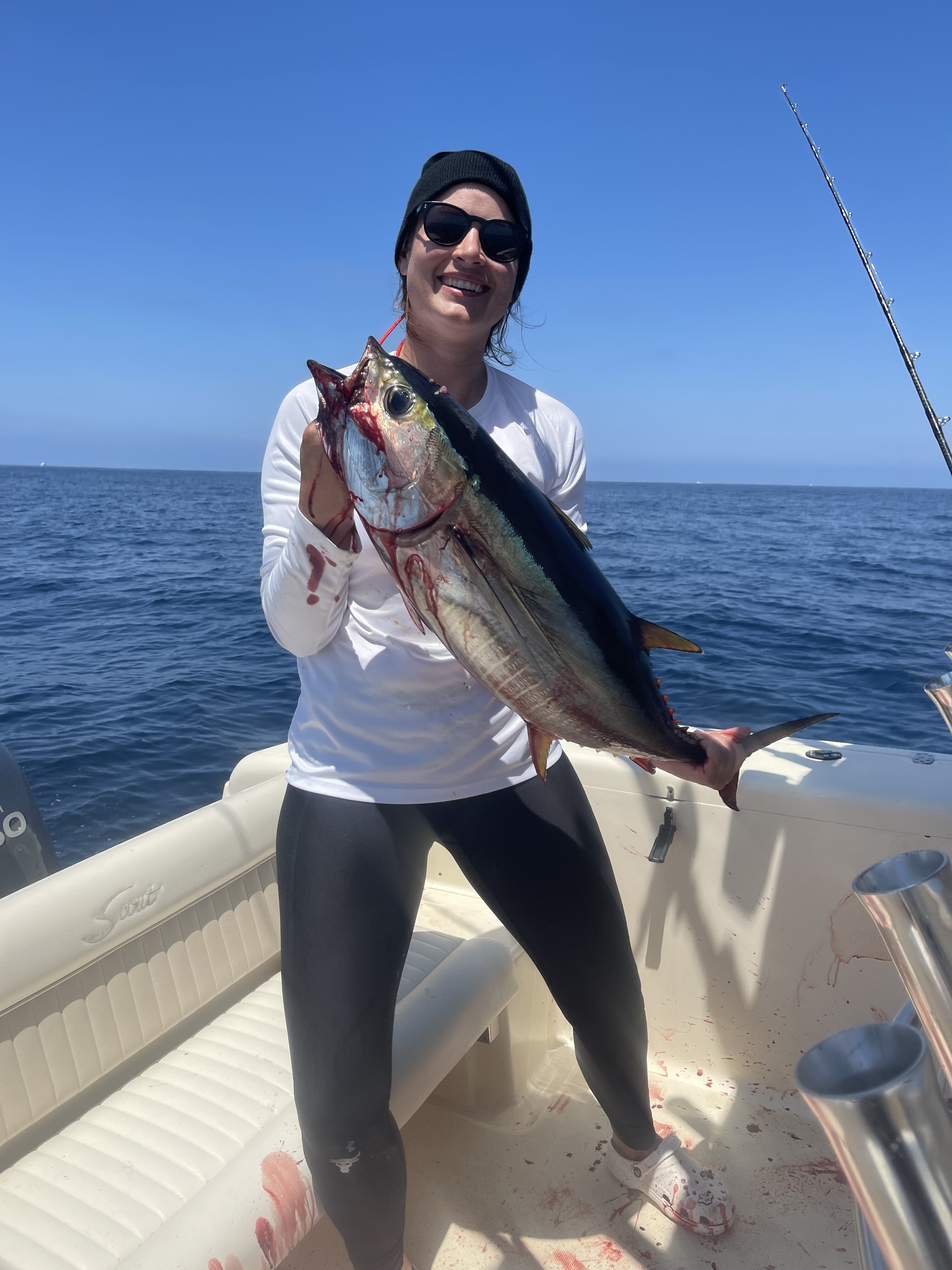 Thats one more YFT. As far as catching goes that would be it! But what an amazing day it was out on the water catching up with my good friend Shaun and being a part of Staceys first tuna experience! Can’t thank him enough for getting us out there and always being a great sport and a fishy captain.

One more very important and Honorable mention… during the BFT Battle, one of us musta bumped the bait pump switch and by the time the war was done all the bait rolled! We had a quick chat with the crew on the “Cali Rose” earlier on and they happened to roll across our bow a half mile away while we were deciding to run in for bait or not! Hollered at them over the radio and asked if they could spare a swipe of bait for us! Without hesitation they turned toward us and salvaged the day with a few net fulls of fresh and more importantly Live bait. Made the difference in one more fish for us! After an exchange of bait and beer money we parted ways but I herd they had a decent day as well, so one more time THANK YOU to the skipper on the bad ass Sea Fox “Cali-Rose”!

we spent a bit more time on the hunt and enjoying the amazing weather and company together before calling it a day, but a fun trip none of us will soon forget! 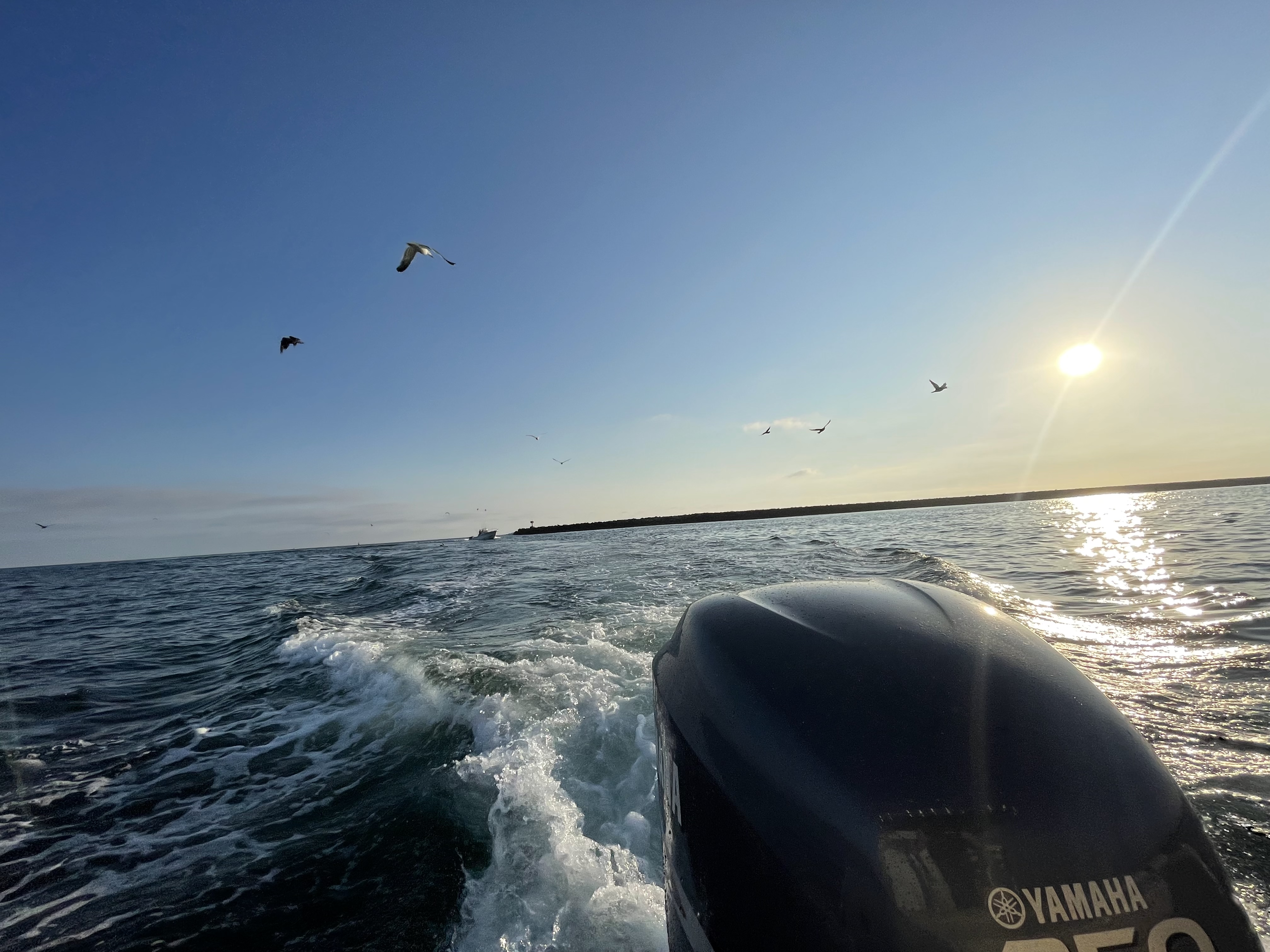 Awesome report! Congrats all around. Thanks!
Reactions: Lugnutimus
Upvote 0

Congrats on the BFT! Thanks for the pics and report.
Toggle signature
-AH
I get skunked and I can not lie
Reactions: Tuna Dreamer and Lugnutimus
Upvote 0

great job getting your lady to pull on a tuna - she'll be addicted now
Reactions: Tuna Dreamer and Lugnutimus
Upvote 0

Awesome trip and so good to see another boat help you out. A definite tip of the hat to the Cali-Rose

Congrats! What an awesome move by the Cali Rose.
Reactions: Lugnutimus
Upvote 0

A day like that will teach your wife to not wear white shoes--great pics
Reactions: Lugnutimus
Upvote 0

Any girl who goes tuna fishing wearing a long-sleeved white shirt is a KEEPER!

Good job on the fish, great job on the report and pictures!
Reactions: Lugnutimus
Upvote 0

A good day on the water for sure! Congrats!
Toggle signature
Thanks for your report. Hook up! Cory
Reactions: Lugnutimus
Upvote 0
Show hidden low quality content
You must log in or register to reply here.

Offshore No wounds to lick today :-)