Well slap yer grandma and pass the fried chicken!!! I think last weekend was about as good as it gets!!!
I got the invite to fish La Push aboard the Parker with mr. Tuna Killin' King. It turned out to be a weekend full of firsts, one of them being that neither Stacy or I had ever been to La Push!
Stacy and I met at 5:15 am on Friday and had the Parker in the water by 9:30 am. We spent most of the day Friday searching for Kings and only caught and released two Coho. We moved in to the 100' contour and couldn't keep the Rockfish off! Late in the afternoon we decided to stop trolling and target the Rockfish intentionally with jigs - it was non-stop action for the rest of the day!
There were a bunch of times when the jig wouldn't even reach the bottom before we had a fish on, but when I decided to film catching one, it actually took a few jigs before I got bit.... of course!

We could have kept both our limits, but neither of us felt like cleaning 20 fish, so we kept eleven nice Rockfish and a decent Ling, then headed back to the marina. We filleted, bagged and iced 'em, set up camp and cooked up dinner... bacon wrapped fillet mignon, sweet corn and garlic mashed potatoes, YUMMERS! 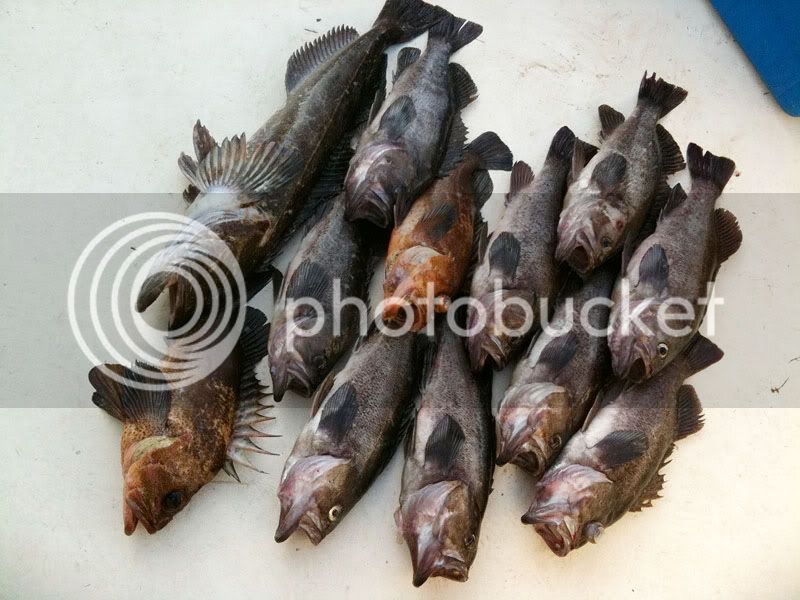 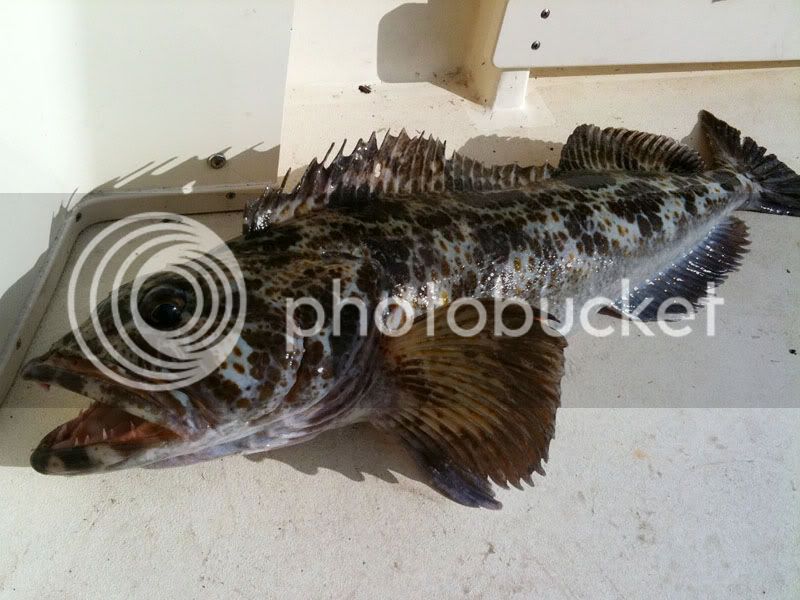 Stacy had one open seat for Saturday and told me I could invite my buddy Ron from Spokane. Ron had indicated he was very interested halibut fishing and would gladly make the drive if a seat opened up. Ron worked half the day Friday, then left Spokane for La Push. He arrived at camp around 9:30 pm, just as we finished dinner and were calling it a day.
My alarm went off at 3:30 am and I got up, made coffee, scrabbled eggs, bacon and Scopace for breakfast. Rock Fish, (the other Ron) met us at the marina and we headed out in search of Halibut. We arrived at the South West corner and Stacy set us up for our first drift. The two Rons and Stacy dropped bait and I sent down a jig & worm. I barely bumped bottom a few times when CHOMP!, I was hooked up!!! After a very fun battle I landed the first Halibut of the day - a 43 pounder - just like that, I had my limit. This was the perfect opportunity to capture some of the action, so out came the camera! Rock Fish was the next to hook up as you'll see in this video. Now Rock Fish had worked until 11:00 pm Friday night, then drove straight out to La Push, so it's very understandable why he chose this particular equipment for Halibut.... poor tired baby... wink:

You were also able to witness my buddy Ron catch his first halibut ever in that video! Ron caught on really quickly, and was into all kinds of fish, including this Boccacio Rockfish. Also, he was the only one to get a double on Halibut!

After releasing several small Halibut we managed to keep our limits. Rock Fish got the big fish of the day, weighing in at 44 lbs, next was my 43, and Ron and Stacy each kept fish in the 30 lb range.

(Here's another video I found on my phone that I forgot to publish...)

Then, it was Ling-a-Ling time.... and did Stacy ever put us on the Lings!!! Our first drift our lures wouldn't even hit bottom before some toothy critter chomped 'em! We released a good number of legal, but smaller Lingcod as well as several more Halibut before we kept our limits of monster sized Lings!!! Once again, Ron was leading the action! (beginner's luck!!! wink: ) Ron not only caught more Lings than the rest of us, but he caught the two biggest Lings of the day, a 24 and a 26 pounder!!!

Rock Fish and Ron headed home Saturday evening with their coolers full of fillets, and Stacy and I decided to move to Westport to try for Kings on Sunday. Stacy and I spent the night in Aberdeen, then up at 4:00 am and on to Westport. We crossed the bar at first light and began our search for Kings. We started on the 120' contour in an area being heavily worked by commercial trollers. We trolled for a couple hours without a bump, so we decided to move out farther. We ran about due west to the 180' contour and began marking a bunch of bait. Stacy put a hoochie and flasher down and I dropped a cut plug and flasher. It wasn't long and we were into 'em! Stacy had a lot more hits on his hoochie than I got on my herring and he landed the first hatchery king, this fat 15 pounder!!! 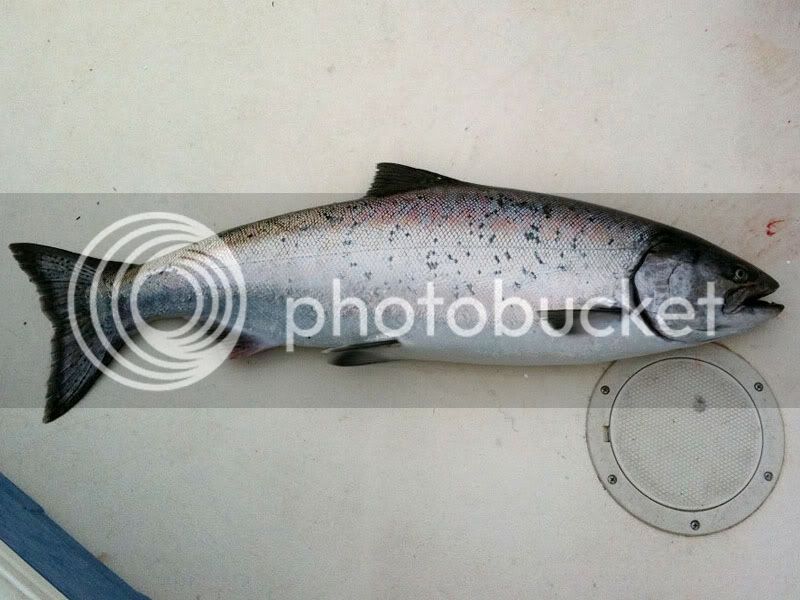 Although Stacy has taken the Parker out of Westport numerous times for Halibut and Tuna, this was the first time he had ever taken it out for Salmon. Between that and his first trip ever to La Push, I'd say Stacy more than proved that he can find the fish!!! It was a total blast fishing with Stacy, Rock Fish and my good buddy Ron!!! What a weekend!!!
Toggle signature
The best way to catch fish is.... IN THE FACE!!!
Upvote 0

Woohoo! That's some good fishing. I need to get my butt in gear and get out there...and follow Stacy to the fish!

Way to put the newbee on the fish guys!
Upvote 0

That makes me want to hook up my boat right now and head for LaPush!

REALLY!!!!!
Toggle signature
If you can't laugh at yourself try harder.
Upvote 0

Touring the Pacific Ocean at 12 knots

TT
Toggle signature
See what I'm up to:
https://blueoceanmariner.wordpress.com/
Upvote 0

Nice post. The videos were a nice touch. My dad and I went to West Port and filled the cooler with Kings today. Could you do me favor and get a message to Stacy. Tell him that Power family father and son team said hi. Does he still have the Whaler?
Upvote 0

Now thats a good day of fishing!!
Toggle signature
Fishing as many things in life is 10% knowing your area, 10% skill and 80% luck.
The 80% doesnt kick in until your ass leaves the couch!!
Upvote 0

great report and nice job getting a newbie out there.

Nice job guys, but that is not a Baccacio it is a silvergrey rock fish
Upvote 0

lingcod todd said:
Nice job guys, but that is not a Baccacio it is a silver gray rock fish
Click to expand...

Take that and your little dog too

almost fell in on that one!!

I'd rather have a silvergrey than a Baccacio.... upper black lip easy miss call.

Well it was the earliest I have ever been off the water on any boat.
I would guess I was the first boat off the water, my motor blow at 17 miles out!
Was in my truck and heading home at 9am
Upvote 0

Dude, that sucks!!! How long did it take to get back in on the kicker?
Toggle signature
The best way to catch fish is.... IN THE FACE!!!
Upvote 0

I have duel 150âs so not to long, my counter rotating motor was not getting a good bite by its self so I was only able to do 8 knots
Upvote 0

Another great reason to have twins!!!
Toggle signature
The best way to catch fish is.... IN THE FACE!!!
Upvote 0

Happiness is being done vacuum packing all 64 pounds!!!

Toggle signature
The best way to catch fish is.... IN THE FACE!!!
Upvote 0

pfam said:
Nice post. The videos were a nice touch. My dad and I went to West Port and filled the cooler with Kings today. Could you do me favor and get a message to Stacy. Tell him that Power family father and son team said hi. Does he still have the Whaler?
Click to expand...

Hey Jeff, its been a long time! I sent you a PM.

Great report, Stacy does know how to find the fish, even in new areas.
Upvote 0
Show hidden low quality content
You must log in or register to reply here.

Saltwater This year with pics