Islands Limits of Bluefin on the Anchor at Catalina with Pop

Left Cabrillo Marina With 84 y/o Pop at 5:30 AM and picked up some very nice Sardine from SP Bait. Didn't gas up after the last trip, so made it to the fuel dock right at 6 when they open. Plan of attack was to zoom down to the outside of the rigs and then check out the Avalon Bank, The Slide and then the East end. Absolutely gorgeous flat calm, overcast conditions and water warmed from 62-68/69 in the zones. After looking around a bit, made the call to check out the shallows off the East end of Catalina...where there have been reports of Bluefin.

Ended up in the general vicinity of the East End (front side) down to the Quarry/Can Dumps area. Anchored up in 100ft and the island was in almost casting range, but the water on the other side of the boat literally came up from 225ft or so. Started to chum (always have some fresh frozen squid cut up) and instantly catch a few almost legal barracuda. My Dad wants to catch bass, so he basically casts 50 ft of the port side of the boat which gets him almost to the kelp line. The current is straight down hill and I'm questioning my anchor job and watching the machine. Decided to reposition, but started to see some interesting marks and shut the engine off. Fishing 20lb test, #2 hook on the old Newell 229 and I get solidly picked up. Thumbed the reel, clicked it in gear and then set the hook...ON! Couple of strong runs and then (luckily) the fish swims out into the deeper water and not into the nearby kelp line. Obviously this is a YT, right?

As I start to gain some line, Something is Missing...I don't feel the classic tail pumping and the fish takes another run, as the rod tip quivers and shivers. Wait a frigging minute...What? Yep...deep color in absolutely beautiful deep-blue water and here comes a (Holy Shit)...TUNA! ??? Pop's got the gaff in hand and the beautiful fish is doing the death circles, BUT (holy shit) here comes the mother of all seals and the fish runs straight down for its life. Long story short, the seal inhales the tuna and I ultimately reel in the leftover rewards of only the fishhead.

Pretty bummed, as I've never caught a Tuna on the anchor or even anywhere near Catalina. So...decided to stick with it and now it gets good...

Decided to slow troll the area and throw back a 25# and 30# with lively sardines. Zzzzzzzzzzzzzzzzz, the 25# set up goes off. Newell 322 and Calstar 870 gets center stage. Man Oh Man, these little fish can run and make your drags scream. A little bit of this and a little bit of that and FIRST ever Bluefin Tuna on the deck! 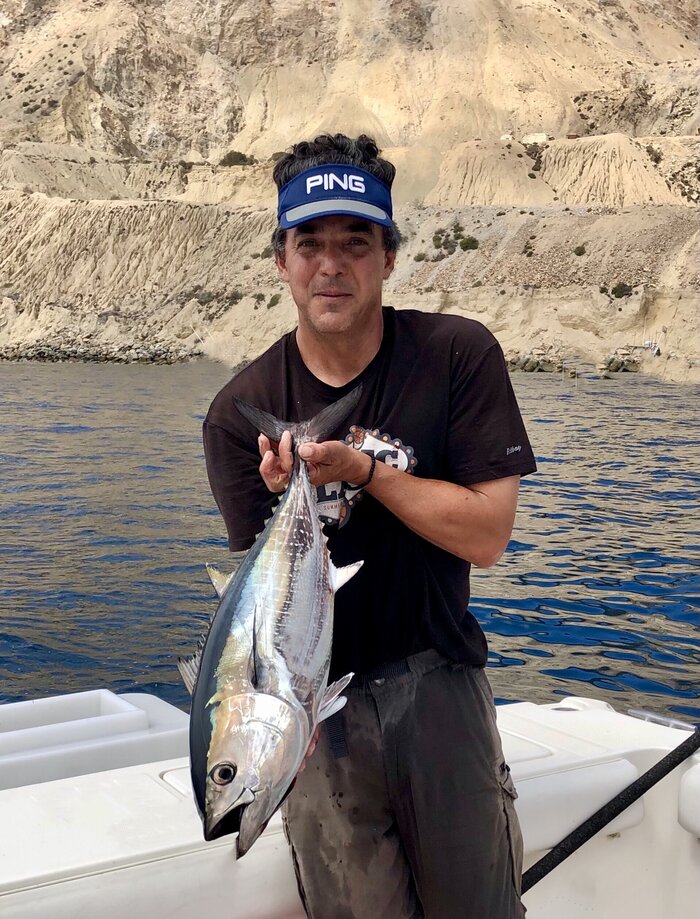 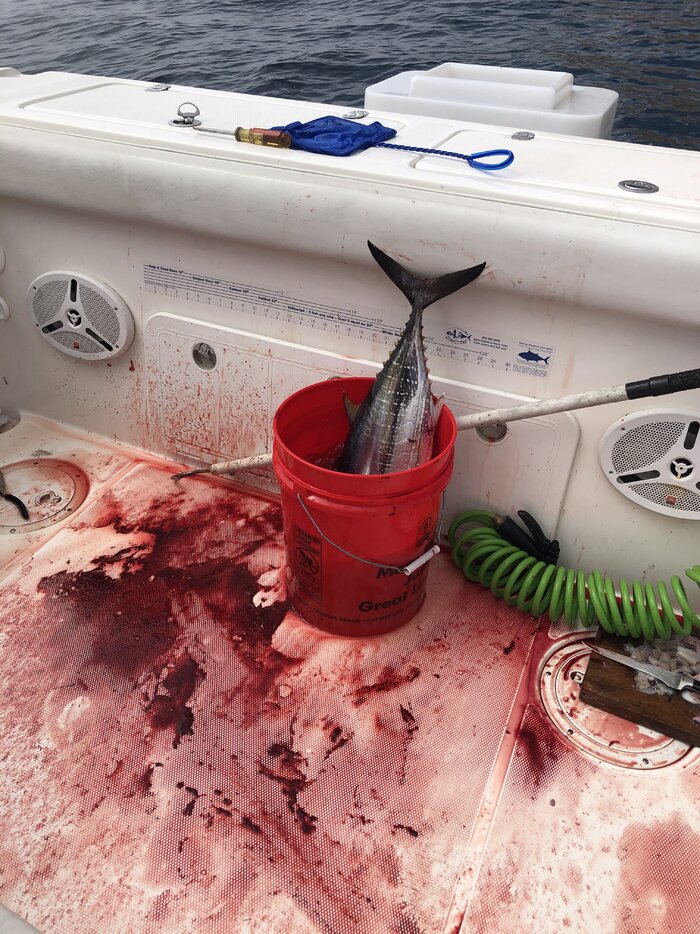 Rinse and repeat and Dad's 30lb outfit goes Zinging. Works it like a champ and #2 is on board. 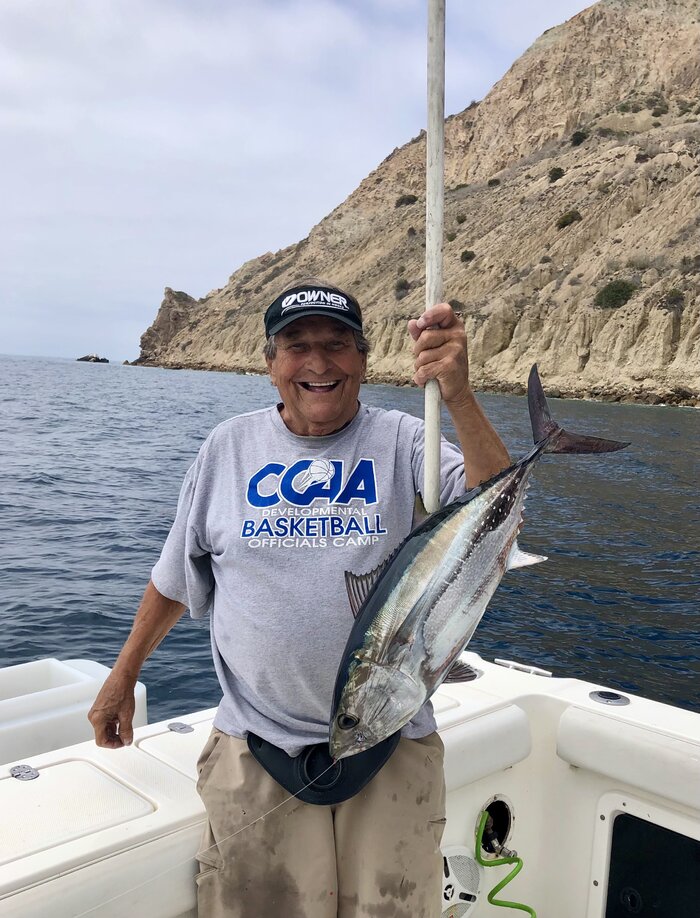 We get one more and then Dad's clicker goes off BIG Time. He starts to fight it and says. "Take the rod, I can't keep going." Knowing that the other 3 fish were are schoolies, I said. "NO. Dad you can do it, you're going to land it on your own!", Well, this wasn't a schoolie and I take over and get worked. Deep color and this is a nice fish. Almost close enough to gaff and here comes...Wait for it...The Godzilla of seals AND his girlfriend. Tried a few tricks to scare them away, but the seals got theirs. Long tug of war and a pretty insane 20-30 minutes later, we land the leftovers of what was a pretty healthy fish. 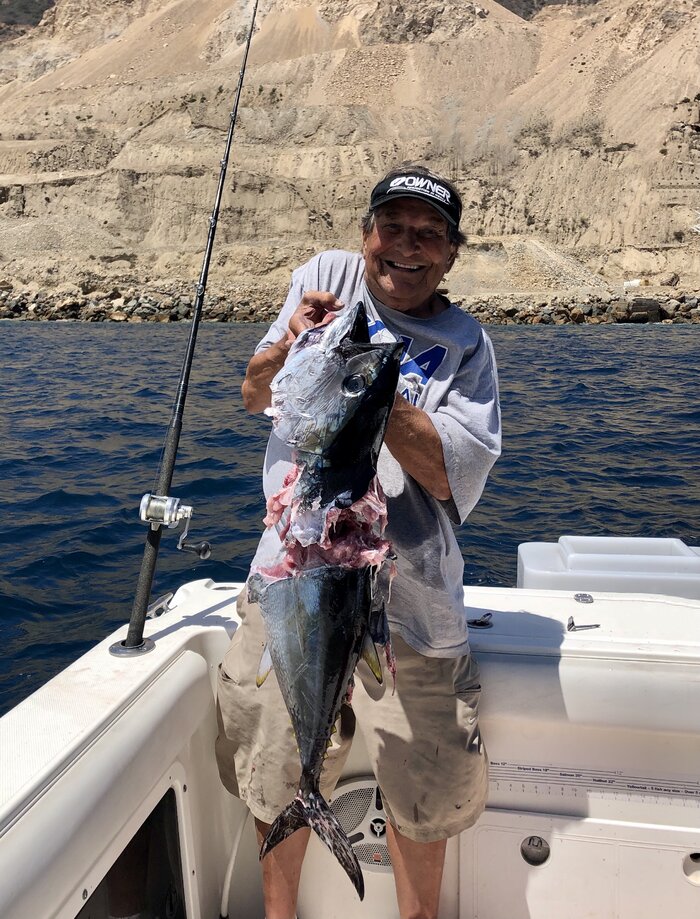 Ended up with our limits and "left them biting".

Unreal that an Island fisherman (no real offshore talent) is able to get their hands on the elusive BF Tuna. Obviously, these are not the Monsters some lust over, but this will Truly be a trip we will Never forget. And...Dad brought the sandwiches and snacks, like usual, 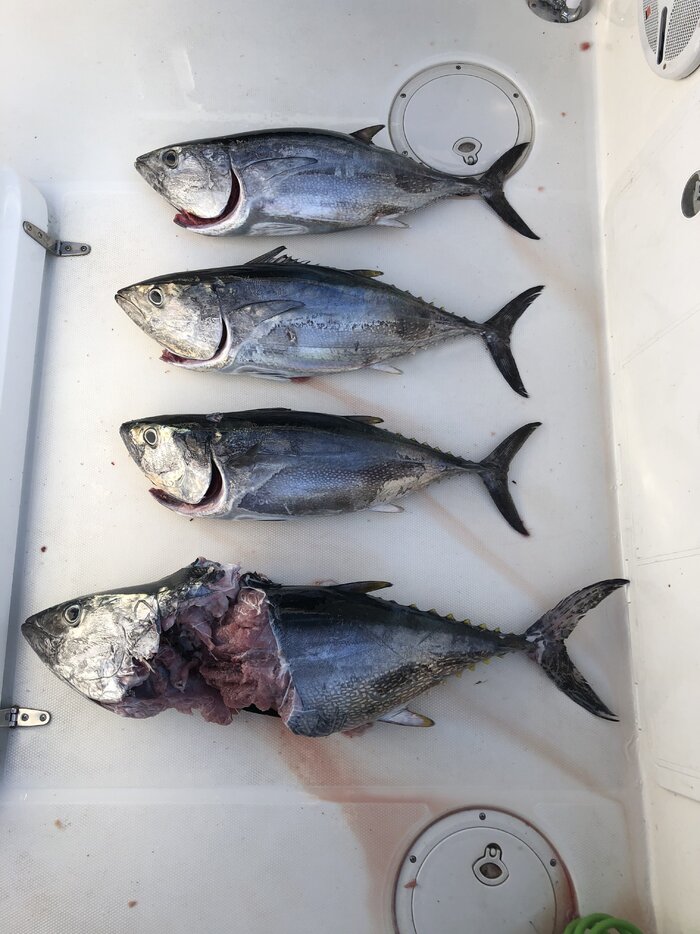 Took a little extra time to filet the fish and got home quite late. Forgiveness was granted by the wife, because, unlike her despise for Yellowtail...She LOVES Tuna.

Sashimi and Poke for the Family: 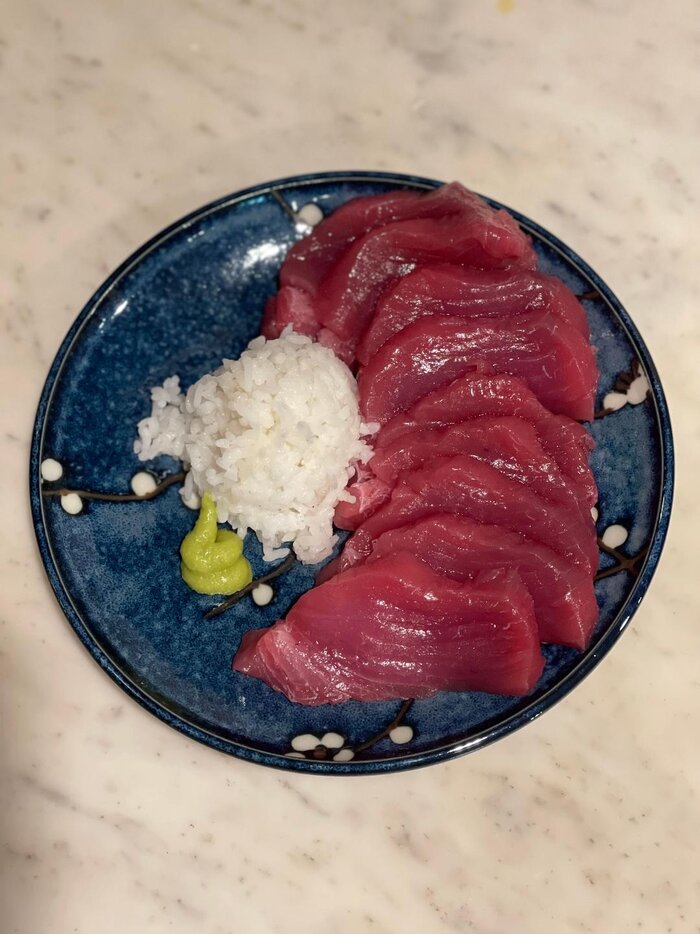 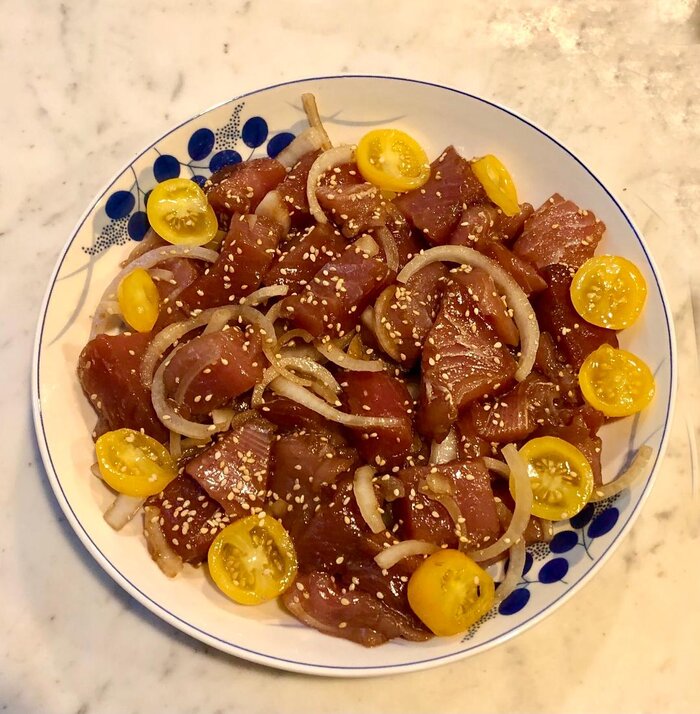 Well...This was one for the books.

Love your Family, Tight Lines and All The Best! 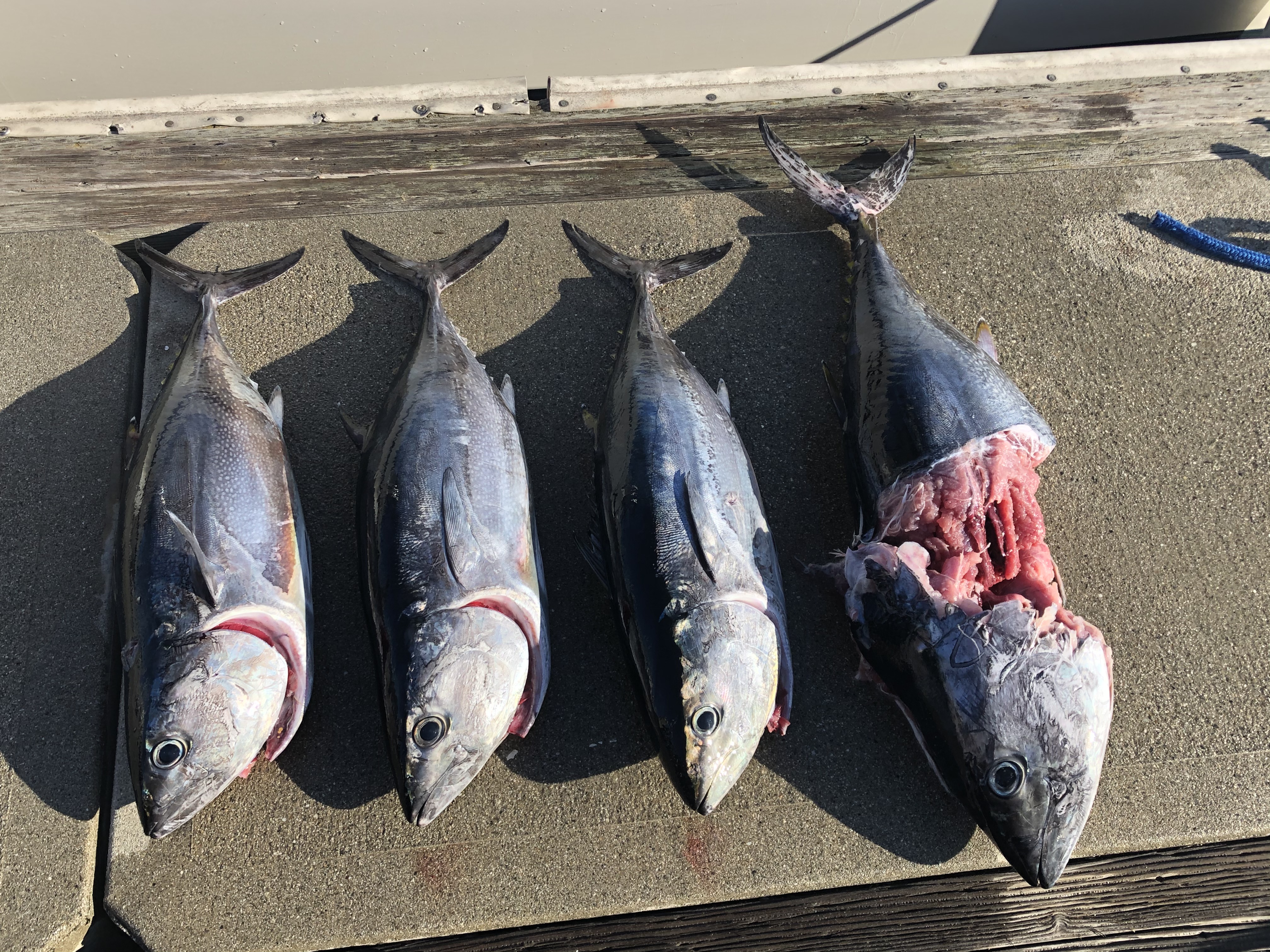 Guy anchors for bass at island...limits on BFT.

What a crazy ass hobby.
Reactions: karlk1125, Mucho Bendo, iThRoWIroN and 33 others
Upvote 1

Wow, Nick, trip to remember for sure. Great job by you and Pops.
Reactions: woodfish330 and Donkey Nick
Upvote 0

Congrats on the limits on BFT, sort of. Thanks for the report.
Toggle signature
-AH
I get skunked and I can not lie
Reactions: pwfishes and Donkey Nick
Upvote 0

And, hey, you didn't even have to gill and gut that last fish!

Toggle signature
"The path to your destiny lies in allowing the discipline of your dreams."
Reactions: Donkey Nick
Upvote 0
R

I wonder if big Mike Hanson is making it happen at Cat the past couple days. Time will tell.
Upvote 0

SWEET!!!!
The pics are great but that Pok'e Bowl pic is righteous.

Guy anchors for bass at island...limits on BFT.

This is a hobby for masochists, you are paying to be humiliated. The more you pay, the worse the pain is.
Reactions: Donkey Nick and Shewillbemine
Upvote 0

Did you end up eating that last tuna that the godzilla seal chomped?
Reactions: Donkey Nick
Upvote 0

Yes great job. Happens naturally sometimes And beats chasing them. Let them come to you!!
Reactions: Findtuna
Upvote 0
B

Nice double limits. Good to know that the BF are still around, but not the seals
What time of day, morning, right?
Reactions: Donkey Nick
Upvote 0

The sashimi looks great; prime cut, no bones or blood line, ... but your missed the seal whisker!
What a great day!!
Reactions: Donkey Nick
Upvote 0

WTG! That look on Dad’s face is priceless! Nice work, great photos and thanks for the report.
Toggle signature
WetWillyBiz on IG & FB 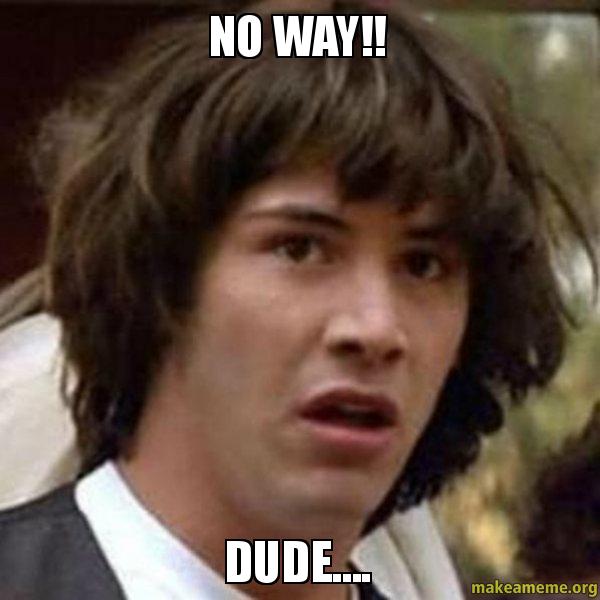 Great Job! Those sea dogs sure do get annoying! Great catches though!
Reactions: Donkey Nick
Upvote 0
Show hidden low quality content
You must log in or register to reply here.

Upvote -3
M
Islands Catalina with a side of bluefin (not)