It had been a tough go for my buddies and I early in the BFT Season as until my last post when we scored a few at night; we probably had 10 blank trips between us on our own boats and the Viking Mother Ship. Our Captain took a terrible fall 3 weeks ago bruising a few ribs in the process which kept us off the water until he was able to be comfortable enough to drive the boat and work in the tower and with the fish being so close the week before it was torture and we were ready to drop any plans and go when he was finally ready.That day was Wednesday the 14th and we met on the boat @ 4;30 AM, picked up 5 healthy scoops of great sardines from EB and headed up to Del Mar by 6AM where we found our first nice kelp so we baited it to no avail and after 15 minutes however we noticed a few pods of tuna crashing the surface in all directions within 200-300 yards of the kelp so we picked up an ran to one group and stopped on a meter mark and chummed heavily and one of the guys got bit on 30# and watched his line rapidly disappearing off his Tranx 400 so he buttoned down and broke it off. Fish were blowing up everywhere but nothing with a hook in it. we spent the next couple of hours there going through at least 2 scoops of bait with no other bites and we finally realized it was time to make a move around 9-930. We started chasing foamers but with so many boats around they didn't stay up long enough to get a popper on them; the fleet was 2-3 miles above us to the north so the Captain decided to head west and leave the shit show. We didn't see much for the first 3-5 miles but after that it was one foamer after another and we were out there all alone so the fish started to cooperate and I bet we caught fish on every 3rd or 4th foamer we hit; sometimes doubles all on poppers from 11-130 maybe 2PM when the fleas finally found us and started driving the fish down before we could get on them. We ended up with 11 fish from 35-75# for 7 guys and everybody had at least one fish; Took the slow ride home while cleaning the 10 fish we had and we could have stayed out for easy limits however we were low on ice and storage space but we were able to bag one more on a foamer that stayed up as we ran by it and we couldn't store anything more. All were caught on Spinning Rods and I must say the Stella works pretty good on these medium sized fish the drag is very smooth. We got caught with our pants down as a Marlin slid down the side of the boat off Del Mar and it took too long to get the drop back out; we did see a nice Bull Dorado on a kelp but it disappeared in short order. Ocean was beautiful all day and spotting fish within a mile or 2 was no problem at all. A great day to remember with good friends and while Dick Tracy and I were sitting on the bow bait tank in between running on fish he mentioned we were so lucky to have the friends and the ability to be out and fish on this incredible platform and actually have some success for a change and I couldn't agree with him more. It was so fun those Bastards went again today and did a repeat without me (some of us still have to work) and they conked out another 10 fish in the same area as Wednesday under the same conditions. Although I couldn't be there it was almost as fun as tracking them on AIS throughout the day and seeing where they made their stops on foamers wondering how many they might have caught on that stop. Here's a pic of a few of Wednesday's fish and a video from today; the video might be sideways and I don't know how to get it righted so tilt your monitor if you have to. Good Luck and keep at it you're bound to get them sooner or later! 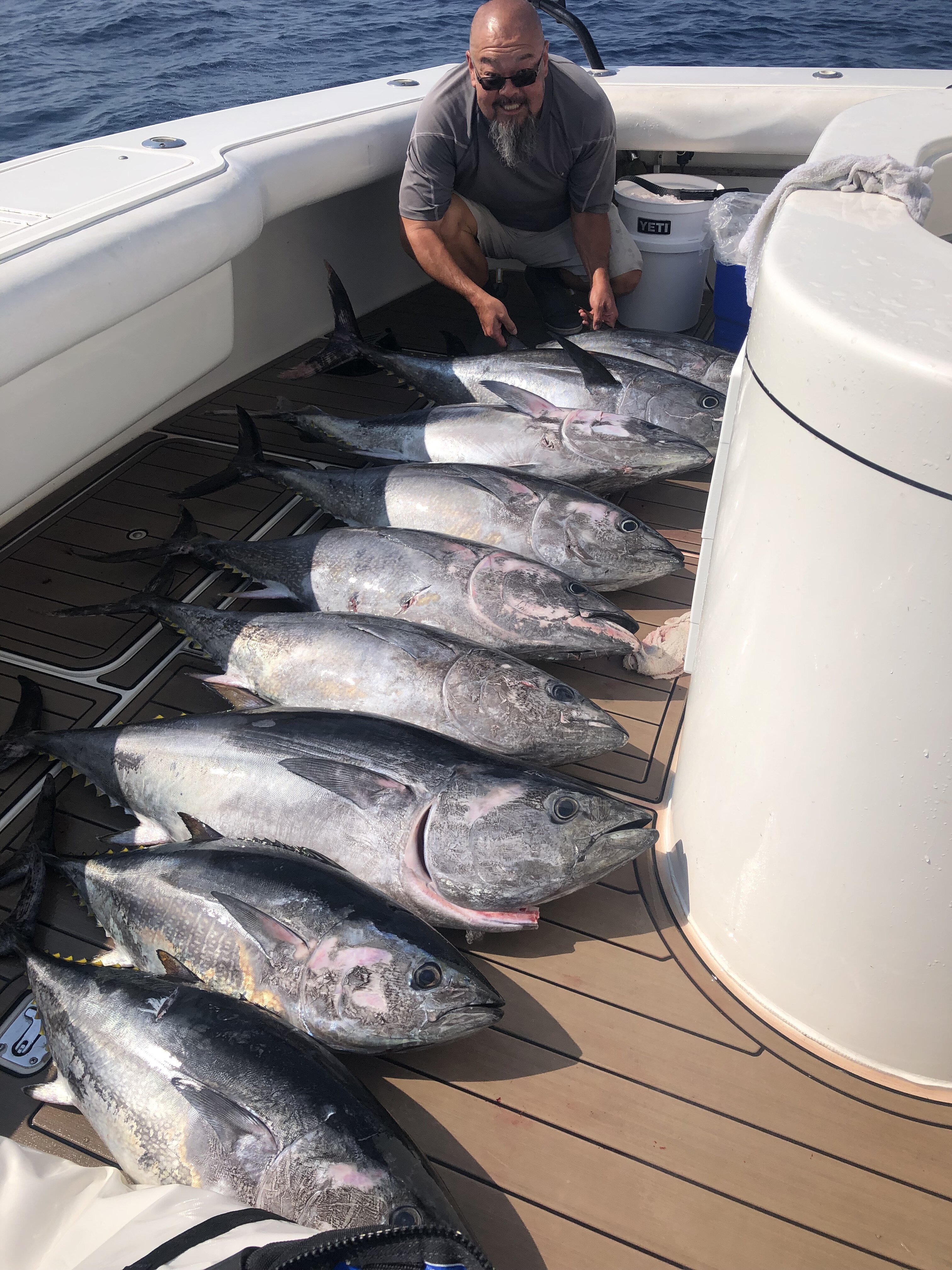 For some reason I couldn't upload the Video; I might need some instruction on that
Reactions: Santino, Mark C., Justin91 and 28 others
Upvote 2

Thanks for the report.
Toggle signature
-AH
I get skunked and I can not lie
Upvote 0