Late report, decided not to have our fish processed or cleaned on the boat (we like to punish ourselves after a long trip).

The Seeker rep Dennis (creaky teaky?) was amazing. Well planned trip and on the raffle the first night I was the lucky one called to win a Seeker Tac80M 40-60# rod, custom made for the Excalibur (Captain taft's fathers boat). Ended up punishing the new rod as I felt I should have. Rest of the guys on the boat were amazing, great company great crew and good fishing to report.

Anyways, got a very late start leaving the dock at about 9:30 and not leaving the harbor until 11 ish on the 24th. Trip before us stayed out later to fill out their limits and the captain told us he had marked the kelp and we were headed straight there to romp on the yellowtail. Went to bed around midnight and woke up early to some larger than we would have liked swells and wind. Have to admit I did get a bit seasick (no yacking) but nevertheless fished the morning. Pulled out 5 quality yellowtail and one dorado before turning in and resting the stomach and head (my freezer is already full from a previous trip, wanted to wait for something with a fin in the name to keep fishing). Our group had 9 out of the boat's load, and we killed em. Off the rip we had wide open yellowtail and a handful of dorado, and we ended up being the lucky ones to pull in some really quality yellowtail. My personal biggest was about 20-25, could not really tell, but my buddy and his father both ended up with 3-4 of 25-30lb models, some real mossbacks that pulled damn hard. Biggest one in our group came on the jig.

After nearly filling up our limits on day 1 (of yellowtail), day 2 was all about the tuna (or so we thought). Woke up early, hit some paddies and pulled some more fish, during the night we headed north to find some of the blue and yellowfin. About mid morning or early afternoon (didn't not have a watch and phone was tucked away) we began to see some action up top. Birdnados and foamers of what seemed to be mixed bluefin and yellowfin showed up but they were boat shy as hell. Couldn't get very close to them and when we did they would sink out damn fast. Had a few schools come under the boat but they were feeding on massive bait balls of the micro anchovies. My buddy and I along with a few other stuck to the jigs while many of the other tried bait. No luck on either, after we piped some casts right in front and the middle of the foamers/breezers. Moving away from the nonbiting school we continued north towards what seemed to be the corner to try and find some more tuna Luckily, we did find some more foamers, this time of what seemed to be 40-60lbers with some larger models mixed in. Same as earlier, absolutely piped casts with the jigs dead front and center of the schools but no luck, no biters on anything (even after we trolled the madams while underway). Moved on to another large bird school of what we thought were gonna be exploding tuna but ended up being an open water breezer of dorado. Very cool to see how many dorado there were in the area (also pulled some off of paddies that were in the area). One person in our group ended up pulling up a 20ish lb bull, a very nice catch among the many doritos and cow dodo's that were mostly caught (976 posted it on their Insta if you saw the Legend update). After pulling on the dorado we kept moving on and were looking forward to a potential night bite of bluefin. Rigged up all the heavier rail rods and jigs for the potential bite but we ended up just steaming in. Oh well, maybe next time.

Again, great trip, great crew (Robin, Keegan, can't remember the others) and some very good food served along with it. Bonus for me was the rod and additional yellowtail and dorado for the freezer. The search for the bluedevils continues..... 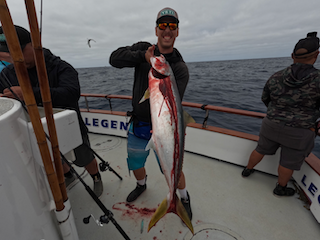 That's how you break in a new rod !
Toggle signature
Courage is the complement of fear. A man who is fearless cannot be courageous.
Reactions: pacificscout
Upvote 0

Can't say exactly but seemed like we were near the corner.
Upvote 0

Offshore 4 limits of dorado this weekend