First post here, been reading and learning for a bit. Took the "little boat that could" out of Hawaii Kai. It is a 12ft rhib with ttop. Spent the past several months setting her up for trolling nearshore. Added trim tabs, moved gas tank up front, and added a ttop to mount rod holders. She small, but way bigger then the kayak I used to fish out of

Prior to setting her up, had a bunch of trips on her out windward side in the winter with no bites. 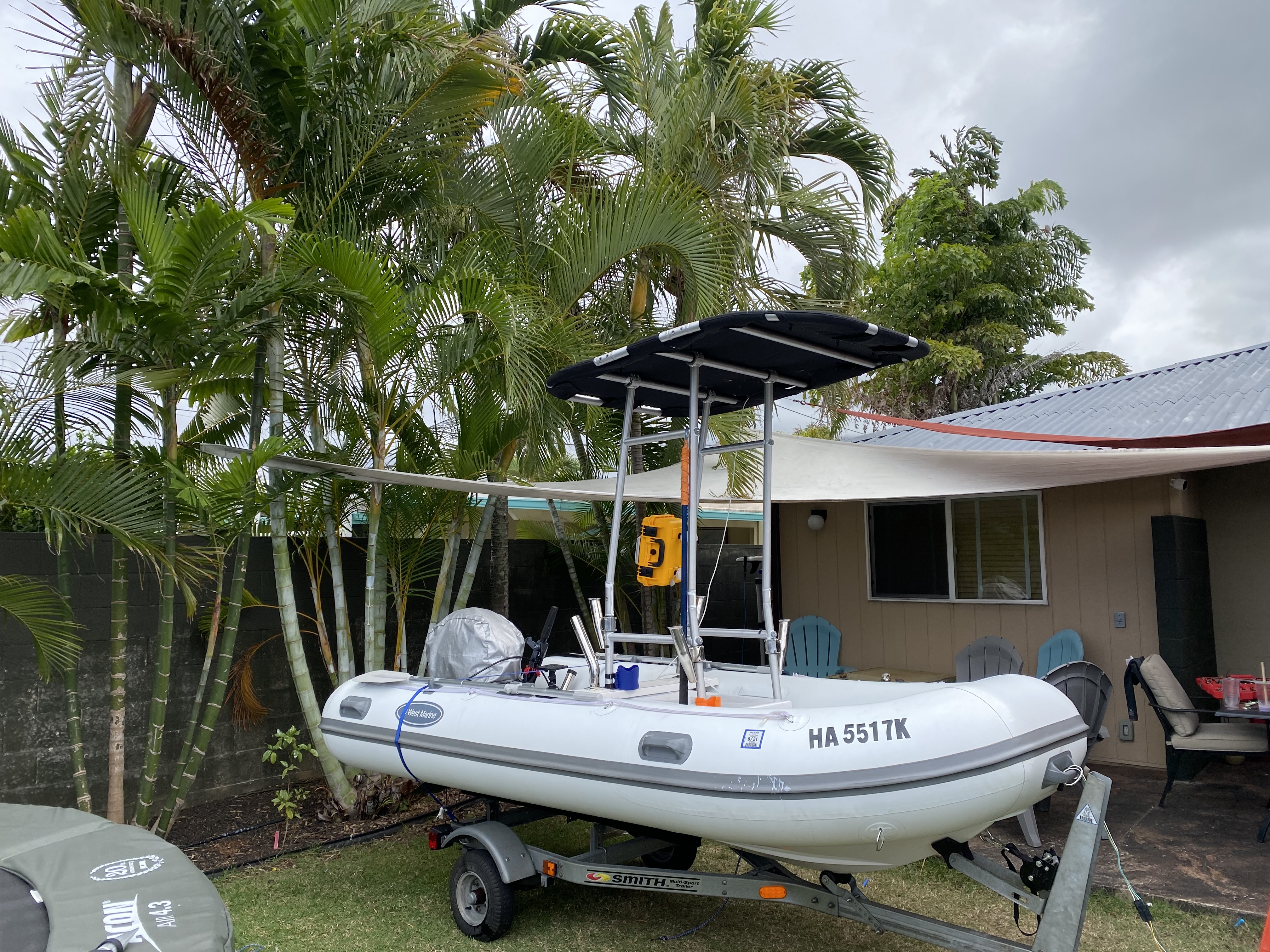 Put in super early and trolled along the coast towards Makapuu. Had a quick hit past the point but did not stick. Around 8am, got a taker and line started coming off. Buddy cleared the close in lines, took our time. Managed somehow in grabbing the rod to slice my finger just enough to put some blood on the deck and all over my shiny Tiagra 50. Pulled it in and was about a 20lb ono. My buddy gaffed it, and I bled it out.
At some point between bringing it on the boat and getting it in the fish bag, my friend managed to "place my gaff" in the ocean. I had made it using inspiration from Reel Adventures Hawaii how to make a gaff video.

I wrapped fiberglass around a paint pole, and epoxied everything together. I was a little cranky at first but oh well, got a fish in the boat. After we both relaxed from our success, I look out and in the distance I see my gaff bobbing up and down in the water. Somehow I made the perfect gaff, it is ugly up close, but balanced in such a way that the butt sticks a couple feet out of the water and is bright orange. Recovered the gaff, duct taped my finger, and back to trolling.

Seas picked up for my boat, and made a slow troll back. Overall pretty stoked to get the first good fish on the boat, and make it back safe. Caught the ono trolling a Tsutomo Blue Frost Ali'i invert with skirt choice by my 12 year old.
Got to say though, alot of people helped me catch that fish. From the guys at Nanko's walking me through rigging, and setting me up with the right reels, to the one uncle at POP, that walked me back and forth choosing skirts, and hooks. 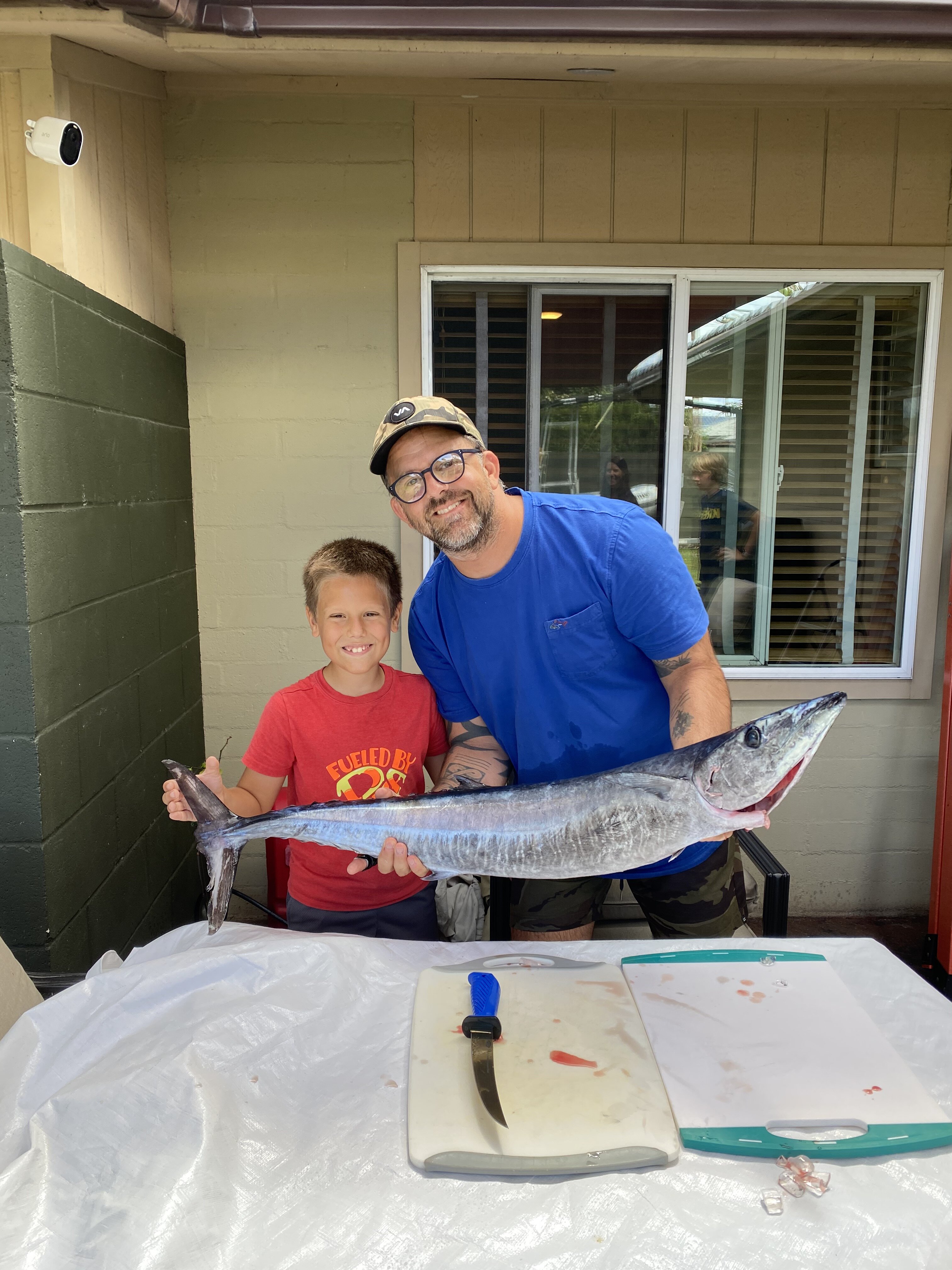 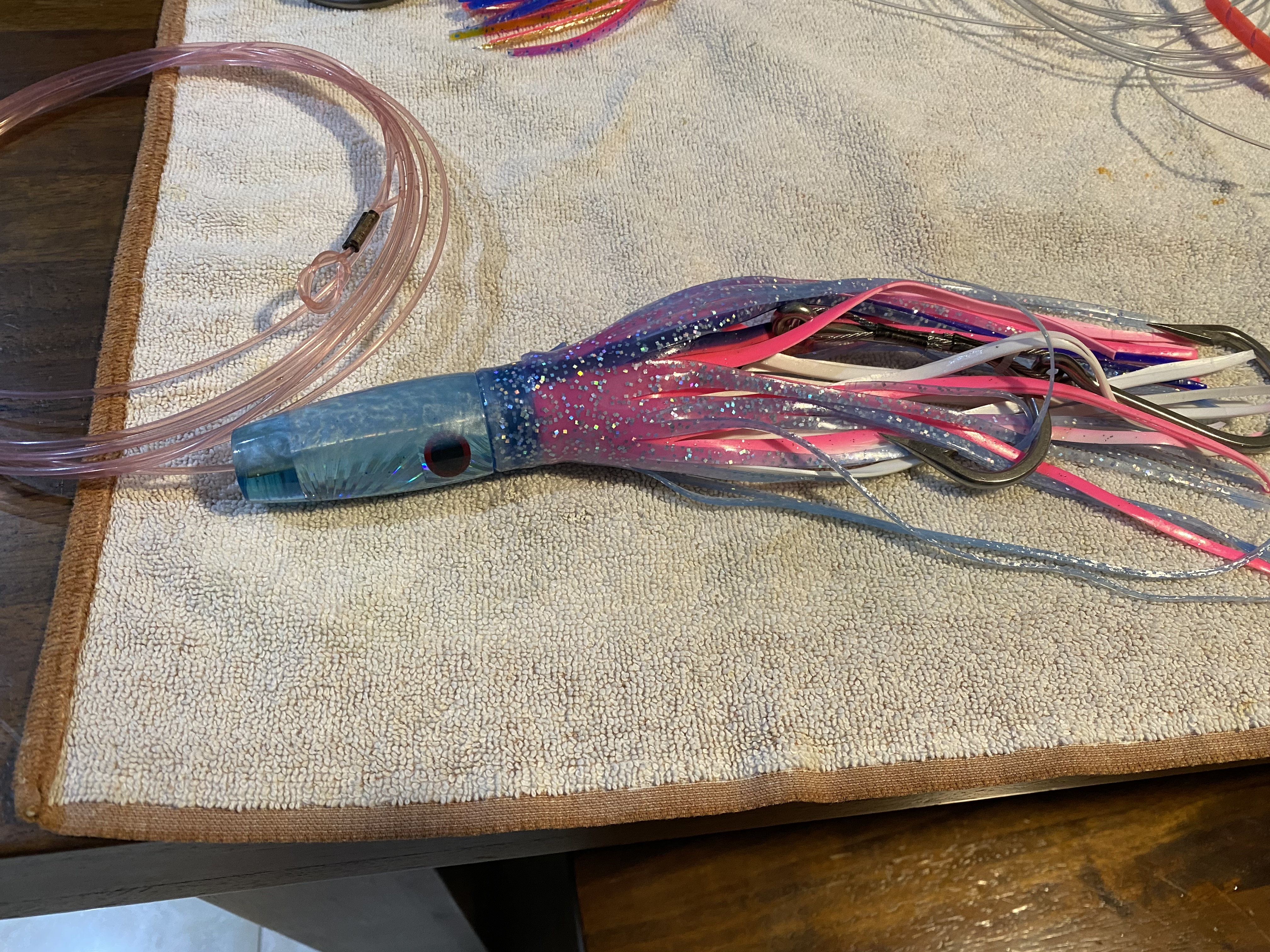 Reactions: FlatPack, Tunahead, I'M OFF and 9 others
Upvote 1

Jason and crew,
Good goin' on the ono, the gaff recovery, wound care and successful ledge run. Obviously you need to have your 12 year old to pick all of your skirt combinations.

Nice! Brings back memories. I started my pelagic fishing career on a 12' inflatable with a 8hp Yamaha. We would pound mahis, onos, tunas with 4/0 senators. The ride was rough, wet and slow, but I learned a lot before upgrading to larger boats. Guys on real boats thought we were crazy when they saw us 2-3 miles offshore pulling up mahis. One thing that worked real good was I put a piece of carpet that was twice the width of the floor. When we were fishing the carpet would be folded over on itself under our feet. When we would catch fish I would flip half the carpet over the side, drag the fish over it into the boat and as soon as the fish hit the floor we would cover it with the end of the carpet that we just slid the fish over, then pin the fish down in the carpet burrito and brain it. Worked super good for mahis. The end of the carpet that we flipped over the pontoon to land the fish also protected the pontoon from getting popped by the hook point (which happened a couple times before we started using the carpet). Those were the good old days! Have fun, be safe and catch fish!
Reactions: Tunahead, patfishhi and finsane
Upvote 0

I did a lot of solo fishing off a 12' rib and loved it! Just remember only you get to use the gaff, so you got nobody to blame but you if you pop a tube! LoL I got into the habit of always having the hook pointed up and belly gaffing. Nankos is the best
Toggle signature
Lurkmeister
Reactions: Tunahead
Upvote 0
G

nice going on the fish, and please remember to have a PLB or an EPIRB, and a VHF on board......

same as for all size boats

. BE Careful, Ono and Mahi can throw jigs at ya too.

I had a Mahi hit a Zuccini Zuker and throw it and the 6/0 hook back thru my right cheek. Duct taped it, stuffed paper towels in my mouth...went back and caught that Mahi. On way home later, 22 stitches in the ER in Newport Beach. OWEEE
Reactions: JimmyK
Upvote 0
J

Good going on the ono and recovering your gaff. Your son has good taste in colors, maybe I should ask him for advice. As for gaffs, my favorite is a 4' homemade (much like yours) but the handle is bamboo and wrapped with nylon cord for grip. Good luck fishing with many more great adventures out there...
Upvote 0

Congratulations on the ono! Most impressive part of that story though is that you actually got someone to help you at POP
Reactions: Tunahead
Upvote 0
J

JimmyK said:
Good going on the ono and recovering your gaff. Your son has good taste in colors, maybe I should ask him for advice. As for gaffs, my favorite is a 4' homemade (much like yours) but the handle is bamboo and wrapped with nylon cord for grip. Good luck fishing with many more great adventures out there...
Click to expand...

JimmyK said:
Good going on the ono and recovering your gaff. Your son has good taste in colors, maybe I should ask him for advice. As for gaffs, my favorite is a 4' homemade (much like yours) but the handle is bamboo and wrapped with nylon cord for grip. Good luck fishing with many more great adventures out there...
Click to expand...

I bought the bamboo from a fishing supply store that closed a long time ago in Kakaako. Not sure where you can buy bamboo nowadays...
Reactions: Tunahead
Upvote 0
Show hidden low quality content
You must log in or register to reply here.

The Deck got Bloodied