Took my 10 year old granddaughter Shelby out yesterday (Sunday) morning on San Diego Bay for a couple of hours, launching at 7am. Time was limited as we hadf to head to the airport to pick up her aunt and uncle at 11am.

I had loaded both bay and ocean rods, but forgot the bay lures, so we headed to the bait barge and bought a $10 quarter scoop, then ran out to to the channel to bounce-ball the outbound tide.

1/2 kt drifts along the southern channel drop-off produced a number of fish, and a legal halibut for her at 8am that popped the hook when it made its first run back down!

we drifted a couple more times, catching a variety of fish... including a couple small hali's. Last drift at 10:15, I tell her to "wind it up" and her pole goes bendo! She's cranking hard, telling me it's definately a hali, even though she's only had one other one on before. And, she's right! Up comes a definate legal, which makes one small run, then gets a quick gaff! First Halibut, just like that. (26", 6 lbs)

We caught 13 fish total- sandies, a spotty, three halibut, a large greenie, and a rock.... but that first 'but had her singing "I caught a hali" all the way back to the landing. 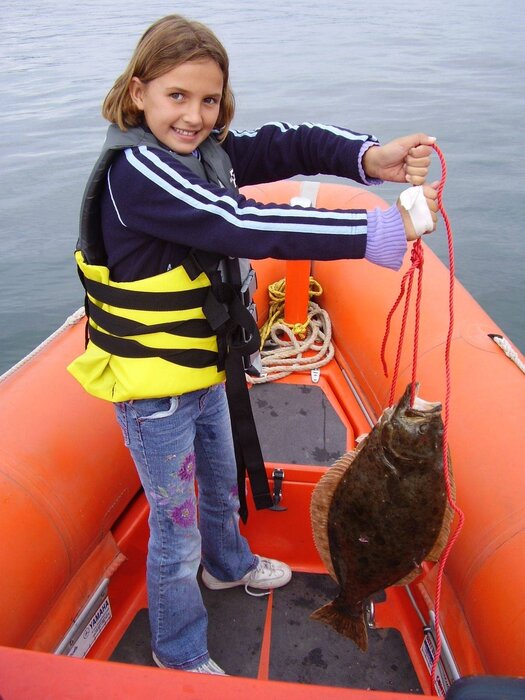 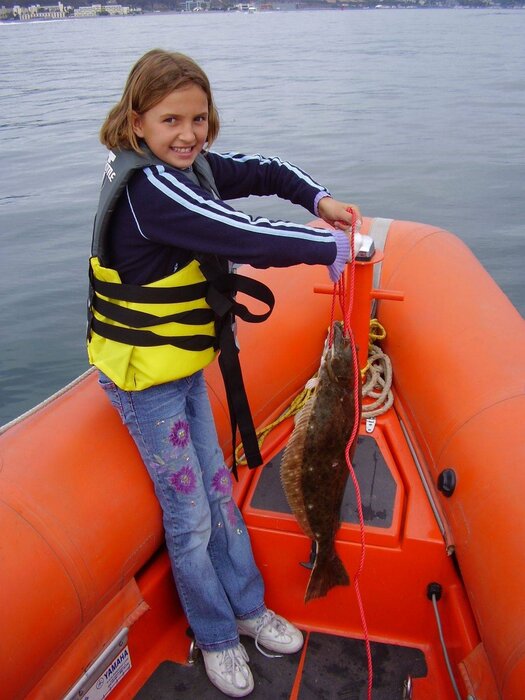 Expand signature
[SIGPIC][/SIGPIC]"The only difference between death and taxes is that death doesn't get worse every time Congress meets." (Will Rogers)

I'm just self employed as of lately and loving it!
Expand signature

Boat
none for now

gotta love the pictures of the proud anglerette.

I love reading stuff like this. Reminds me when I caught my first hali at the old ASW pier in 1977.. when I was 6 and watching my dad hide it under an empty beer box because it was short right before DFG walked by to inspect. Good times
Expand signature
Mark

BS, she is way too cute to be related to you

Boat
oh how I miss you!

Nice job on the first legal Halibut Shelby. Always nice to see another angler hooked up. Good times with Grampa. Go as often as you can,you never have a bad day.

One of those pics / stories that always brings me a smile .... great job guys !!!
Expand signature
Sometimes ya just gotta fish......
K.O.

Right on Jimm. At least someone in the family can catch dinner.

It looks like you guys had a blast. Way to go.
T

Congratulations Shelby. Hope you get many more in the future.

Perfect day! Great job Dad!
Expand signature
He said to them, “Cast the net on the right side of the boat, and you will find some.” So they cast it, and now they were not able to haul it in, because of the quantity of fish. John 21:6 ESV

Boat
ves-sel (noun) Nautical A craft, especially one larger than a rowboat, designed to navigate on water

Way to go Shelby...how do you feel about paint balls?