I just returned from a week on a houseboat on Lake Powell. My youngest brother Don is a part-owner of a huge houseboat, and he invited my wife Pat and I for a weeks' stay in honor of our 50th Anniversary. I appreciated the thought, and in return I booked a full day of guided fishing.

I used [email protected]l.com. Mike McNabb and his son Paul both are well-known guides for many years on Lake Powell, and it was worth it to me to spend the money to reward my brother for his generosity for hosting us for a week. Mike had made the booking, but his boat was broken so he sent Paul. He picked us up at 5:45am from the dock at Wahweap Marina and we rolled southeast towards Navajo Canyon. Even though the Colorado River is being drawn down ferociously because of the extended drought for many years now, the river is currently 160 feet below its full depth, there is still a huge amount of gorgeous canyon walls to look at, and the fish are still doing very well.

We stopped at one of his favorite sites, and although it looked identical to all of the surrounding areas he assured us that there was underwater structure that made it easy for the striped bass to corner the abundant threadfin shad, so they basically hung around and picked off shad at will all day. The trick was to fish down about thirty feet, where the bass were hanging out in the cooler water at the thermocline.

So we rigged up light spinning gear. I had brought two Shimano light setups, 3000-size reels with forty yards of 6# fluorocarbon over a hundred yards of 20# braid, and although he told us that he usually fishes a lot heavier, that a really nice bass was going to thrash our gear if it hit, I assured him that I was very experienced in being trashed by big fish, I get humiliated by tuna regularly, and it was part of the fun.

So he broke frozen anchovies in half with his fingers, and used a 1/8th ounce ball head long-shank hook to go through the piece twice, and we cast nearby. The anchovie would helicopter down horizontally. We would watch it go down slowly in the very clear water for about twenty feet, and a few seconds after it went out of sight we would feel a bite! About two times in three the fish would slurp the anchovy piece right off of the jig in a second flat, and one time in three we would react fast enough to twitch the rod and get a hookset. Ninety percent were nice one to two-pound striped bass, a lot of fun on ultralight rods and 6# fluoro, and we would remove the hook and release them. Every now and then a bigger one would come to play, over two pounds to about three pounds, and if they were nice and fat we might keep them. We kept five fish in all, enough for a good fish fry that night, and they were delicious! All of the rest were handled as lightly as possible and returned to the lake. There is no limit on striped bass on Lake Powell, and some people encourage keeping all of them, even the little ones, but we agreed that we would C&R on this trip except for one dinner.

After about three hours and a whole lot of fun, every few minutes either my brother or I would need either re-baiting or a net, we called a halt and decided to go explore up Navajo Canyon in search of smallmouth bass. A beautiful boat ride was made all the way to the end of the canyon and back, stopping a dozen times or more to try lures along the rock walls. We caught a released over a dozen nice smallmouth bass, using both underwater and surface lures. I caught my first smallmouth using a surface popper, a lot of fun, and Don scored too.

All in all, a really fun day on the lake. Anyone who is going to vacation on Lake Powell and would like to spend the day with a really knowledgeable and experienced guide, who is also a real sportsman, should consider booking with McNabb. Both Mike and Paul are well worth the money. I'll attach some pictures ASAP.
Reactions: Tunahead, diseasedscrotum, marlyn and 4 others
Upvote 1

Here are some pictures. 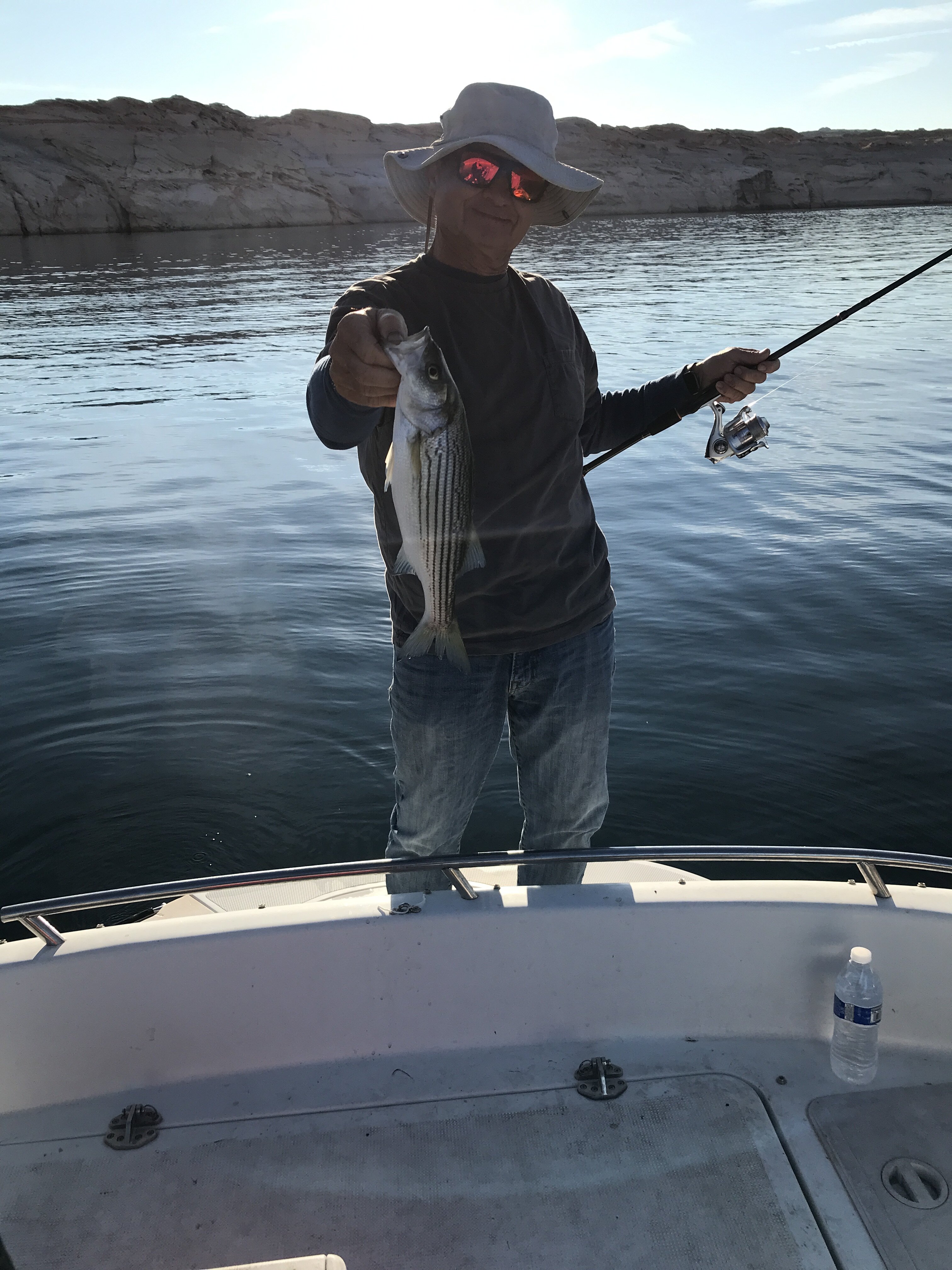 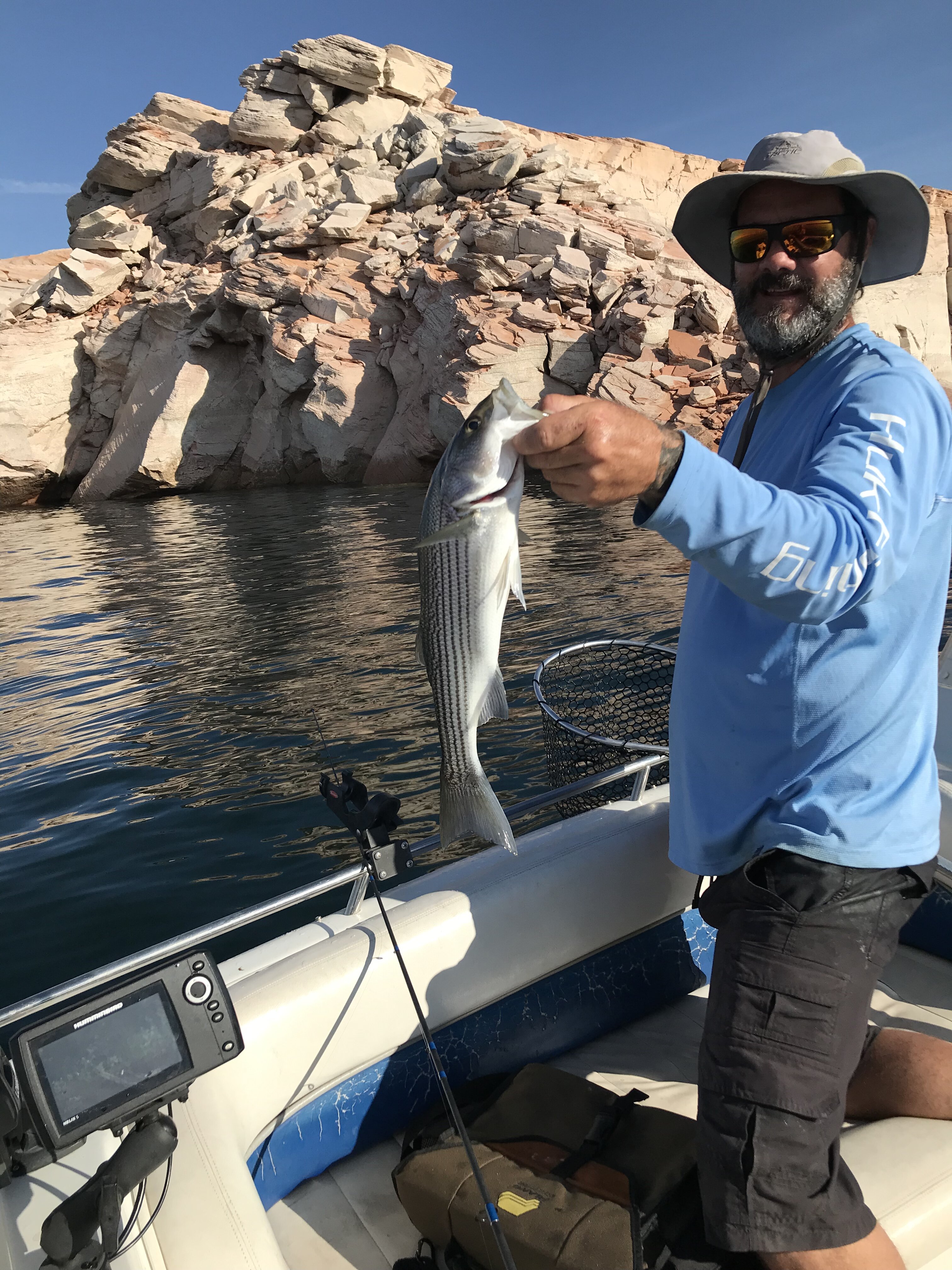 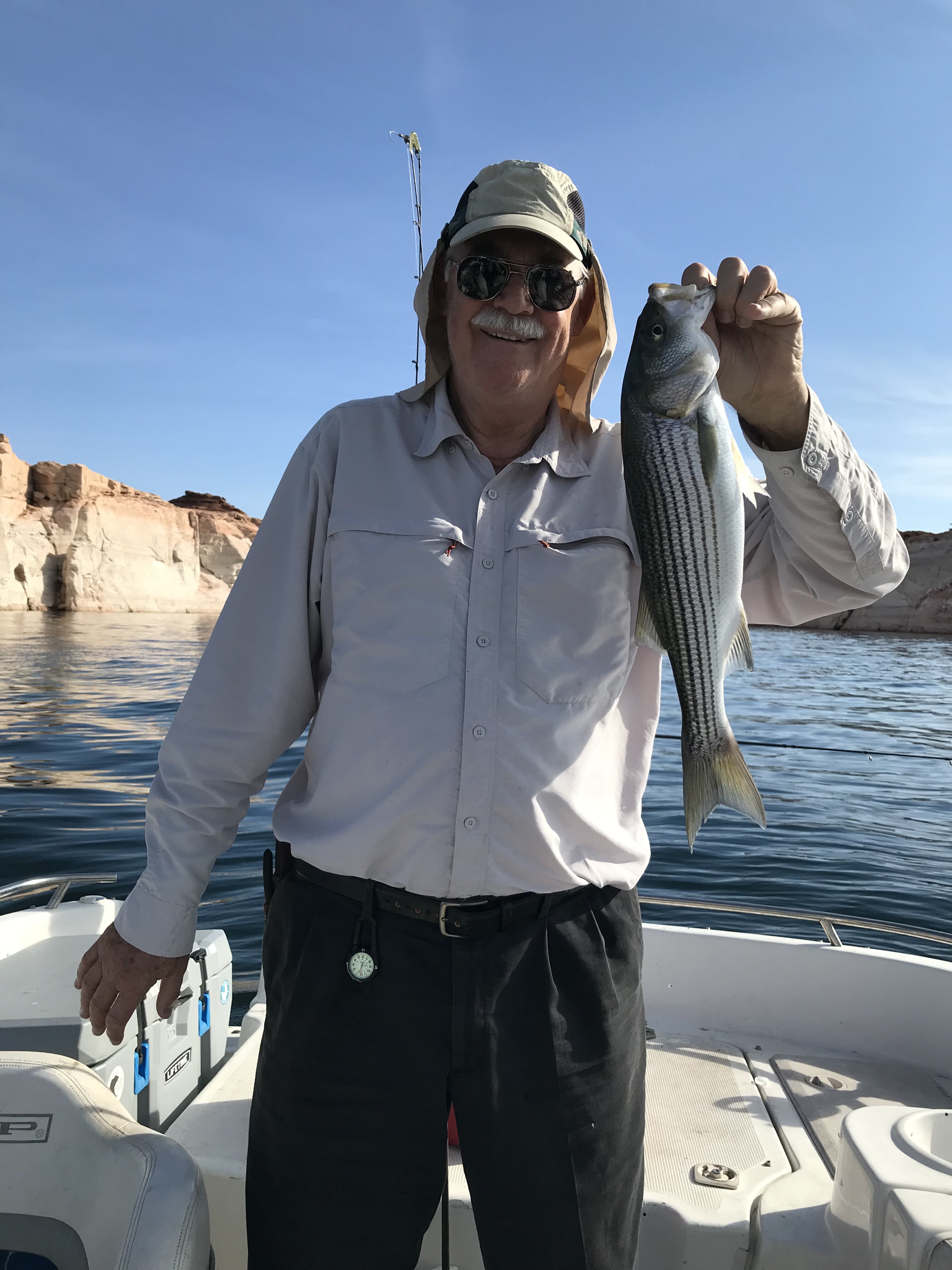 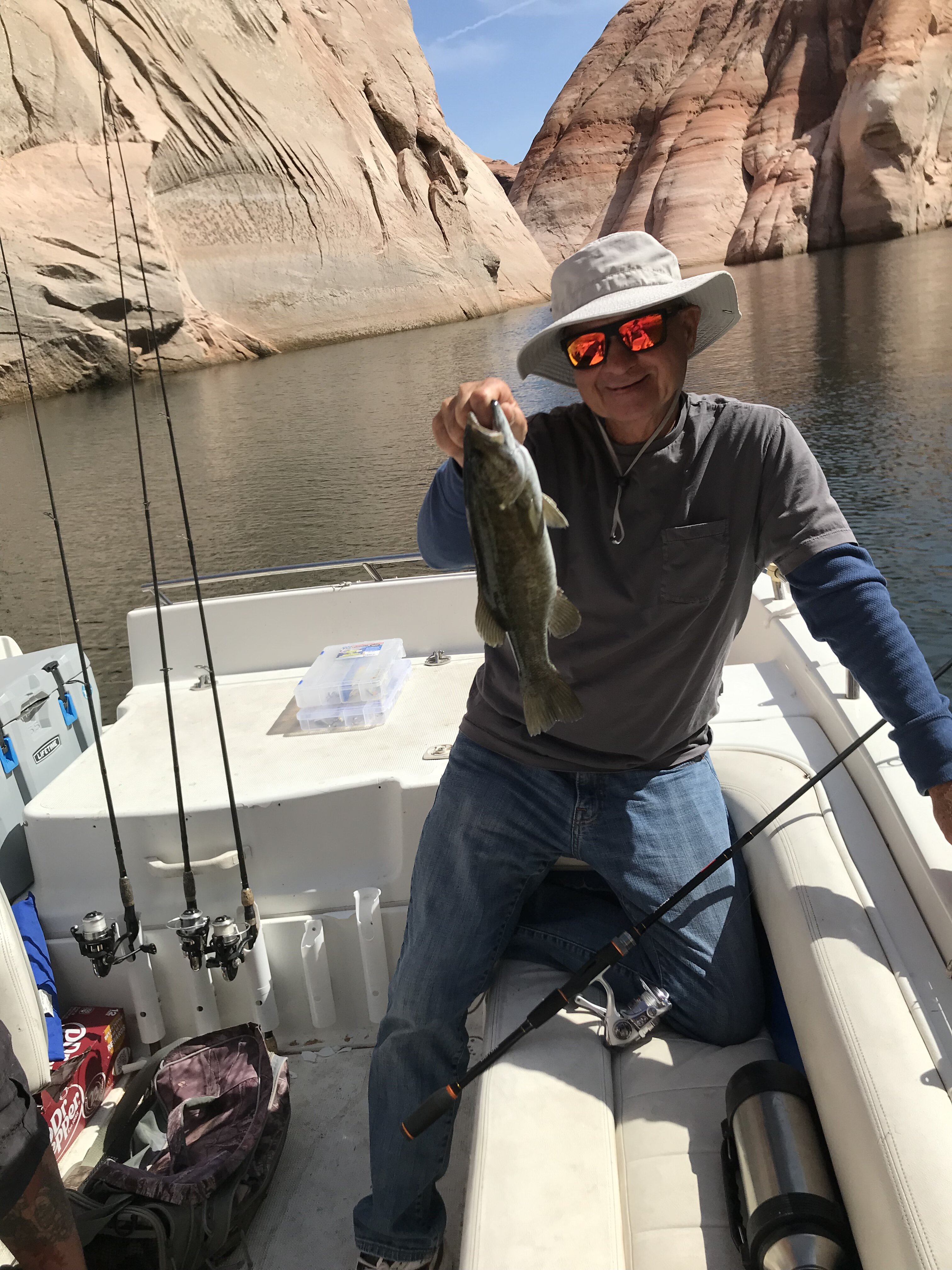 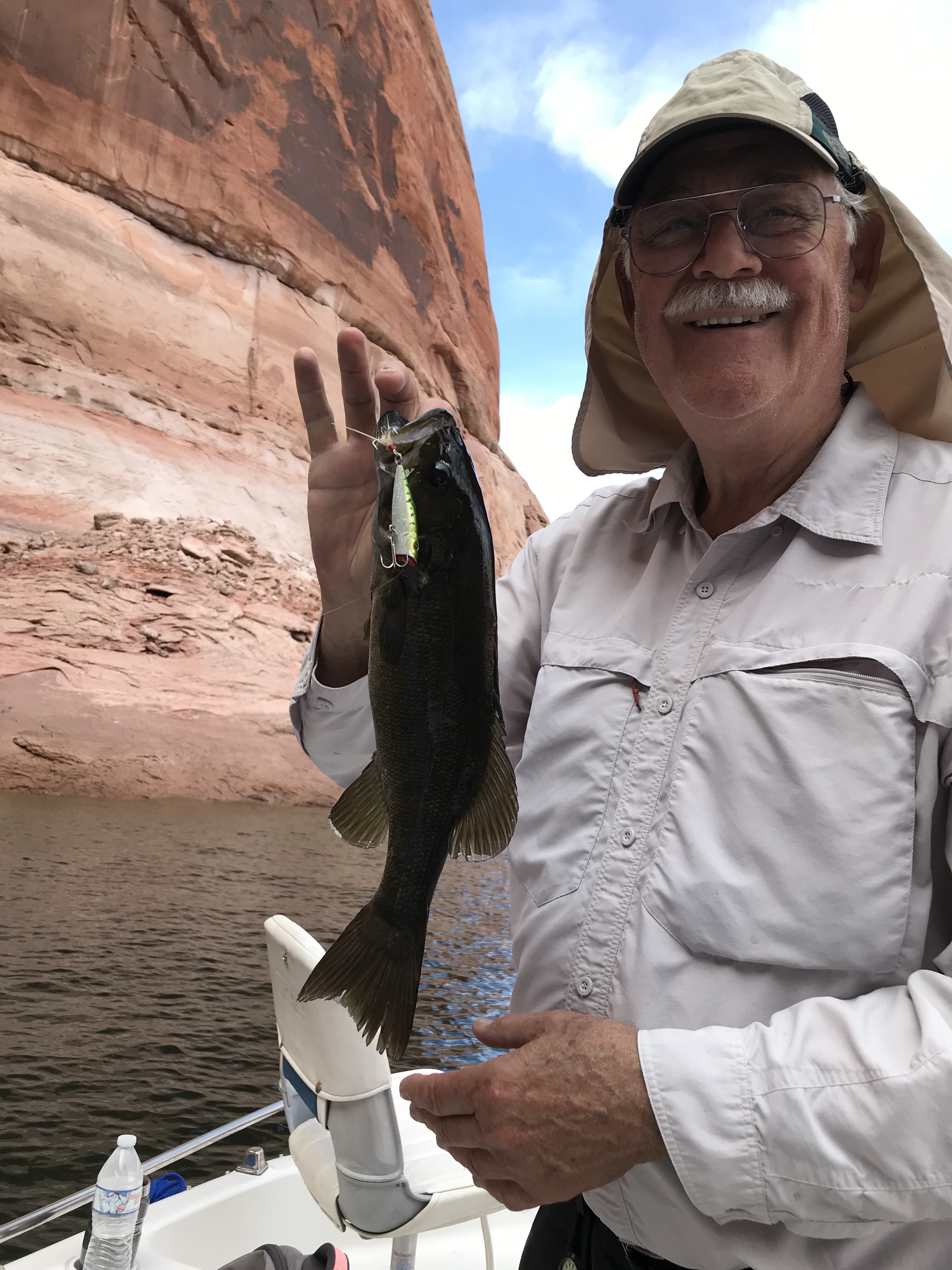 I love Lake Powell,
Been years since we went house boating there.
So beautiful.
Glad you hung out with your brother and happy 50th!
Reactions: surfgoose
Upvote 0
D

Thanks for sharing what sounds like a great trip!
Reactions: surfgoose and Tunahead
Upvote 0

Been house boating on Powell probably 8 times. What a place! Always had good luck on the small mouth and cat fish but never caught a stripper. Doubt I'll be going back as my buddy sold his stake in the timeshare. We'll miss it. Our kids grew up vacationing there.
Reactions: surfgoose and Tunahead
Upvote 0

WOW Great report and pics Goose. Nice fish. Glad you had nice trip.
Where is my bluefin tuna you were going to drop off????

Tunahead -- Ron, I foolishly let some local friends and family know about my last trip, and about ten minutes after I returned in the afternoon with my processed bluefin fillets the cars started lining up around the block. My street looked like the drive-thru at In-N-Out.

The pandemic is starting to ease as more people get the shot, but the mentality is going to continue for a while, I fear. There used to be runs on toilet paper, now it's "Grab Gary's bluefin before he runs out!"

I'll keep you in mind for the next one!
Upvote 0
Show hidden low quality content
You must log in or register to reply here.