This is 1/4 fish report, 3/4 dive report, but I thought I would share our day of chumming several miles off of Laguna.

We started around 11 am, two or so miles off, along the shelf there. The conditions looked good- birds in the area, and we saw bait getting chased on the surface. About 20 min into our drift we got a hook up on a dead mackerel we had soaking in the chum line. A 5 ft female blue, which we released. Once again I am reminded of the seeming futility of catching blue sharks... absolutely no fight. Sight fishing makes more sense when you have a slick so you can pick out your target species (mako and thresher).

After that, we put the hook and line away and lowered the cage in the water. This was my first time since I built the thing in November that I had taken it out with sharks in the water. Soon, we had three blues, 4-6 feet in length around the boat.

I had a tuna carcass soaking 10-15ft away from the boat that the sharks would nibble on now and then. But they really didn't appear that aggressive, so after an hour or so of being in the cage we decided to venture out. Funny- although it sounds a little wacky to enter a chum slick with multiple sharks in the area, it wasn't hard to jump in. The sharks are so beautiful and calm it was irresistible. Ok, now I'm sounding like a nature channel guy, but really- part of why I love fishing is the beauty of ocean and its inhabitants!

The blues were skittish when you tried to touch them and wary when two people were in the water. The sharks seemed to come and go- a smaller one was interested in eating the tuna, while a larger one just wanted to hang by the boat and cage.

So, we didn't encounter any makos, threshers, or whites today

, but we did see at least 4 blues, all of decent size. It was definitely a special thing for me, after building this cage and just starting to fish sharks this summer to jump in with them. I don't think I would go outside of the cage with a mako or white, but in today's situation, I was comfortable with the blues. 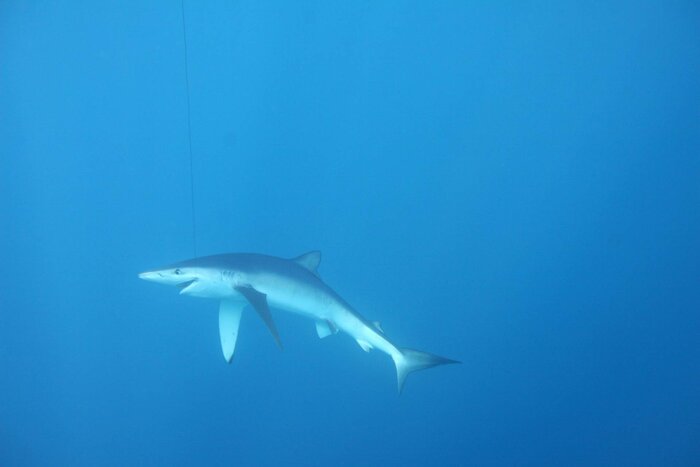 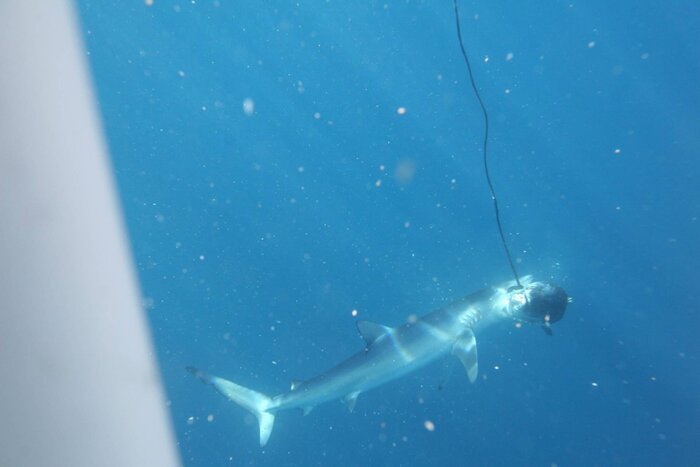 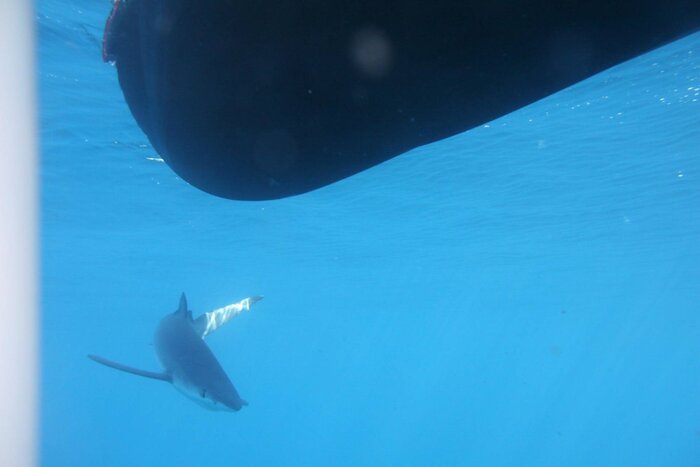 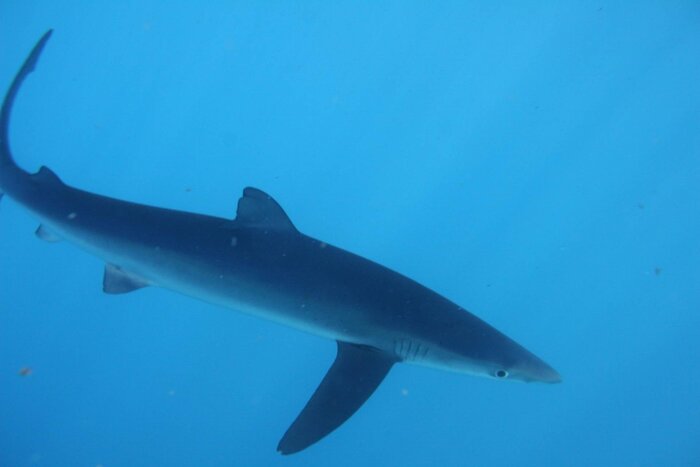 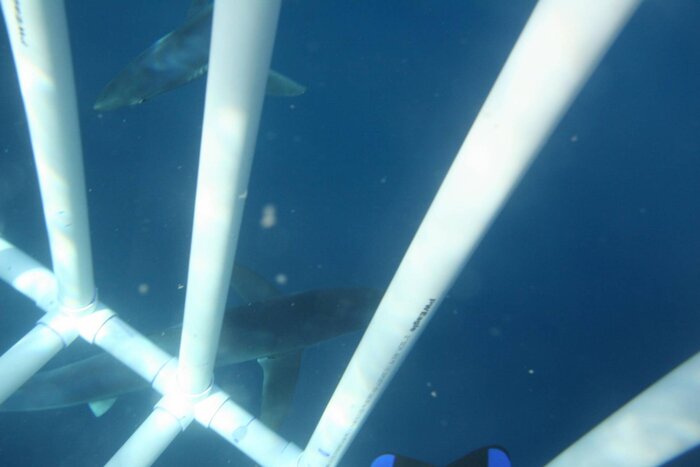 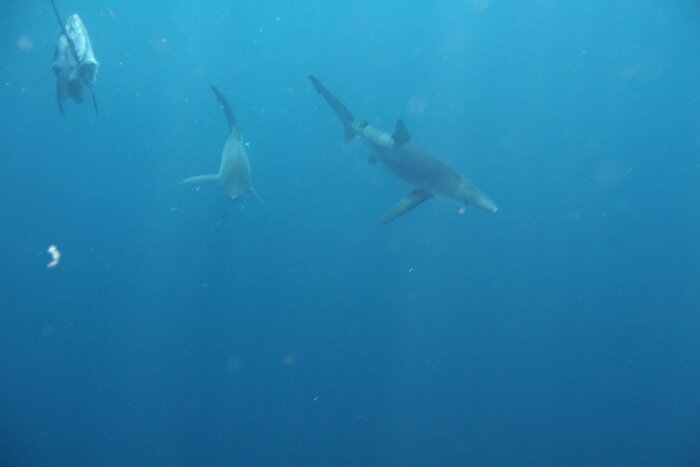 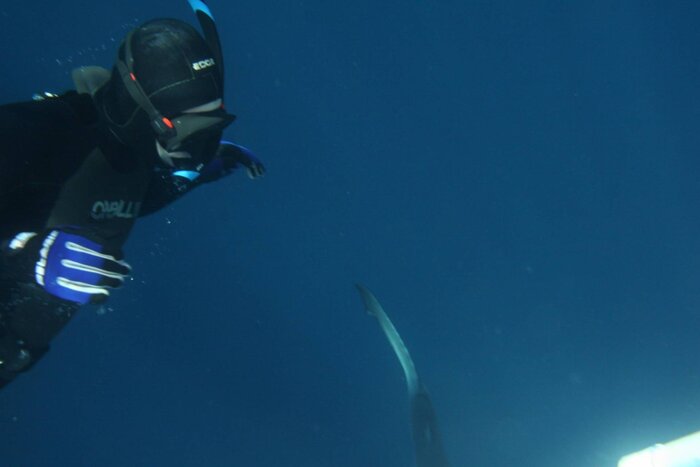 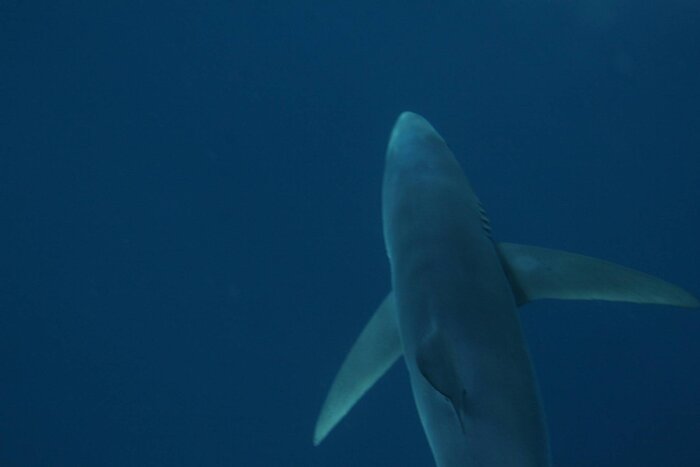 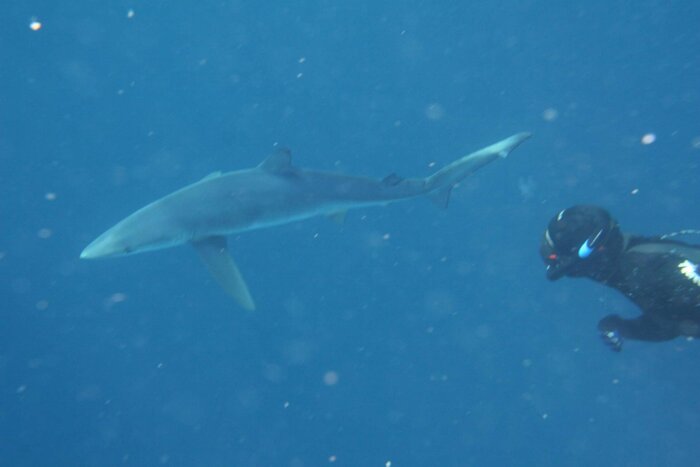 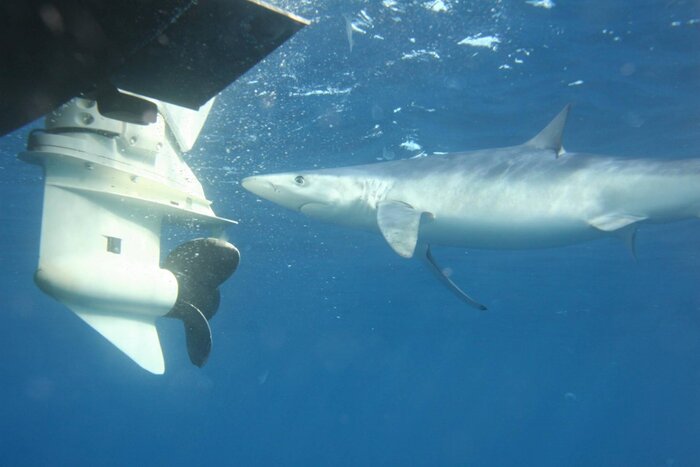 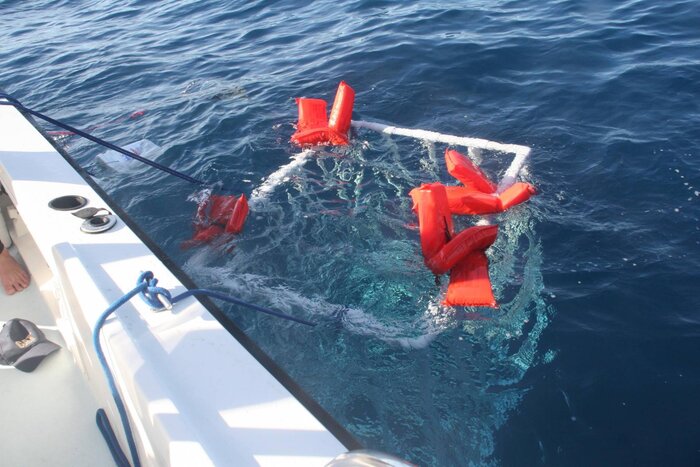 Reactions: jscott, json, Bunger and 2 others

You call that a shark...looks like a mackeral to me...

Please tell me your shark cage is not made of PVC
Expand signature
Everglades discovered in California
This boat isn't made for the glades
Reactions: Chad Skowron, BrentH, Alcapone805 and 8 others

Cool pics first of all and LMAO badass a PVC fucking cage with PFD's to hold it up Classic.
Expand signature
SD KEEP YOUR TRASH AT HOME LA DOESNT WANT THE CHARGERS!
Reactions: zam and BiggestT

BuonaForTuna said:
Cool pics first of all and LMAO badass a PVC fucking cage with PFD's to hold it up Classic.
Click to expand...

id be afraid of some big T's or Makos coming along for the ride.
Expand signature
SD KEEP YOUR TRASH AT HOME LA DOESNT WANT THE CHARGERS!

That was a cool post....the PVC gage is classic,

... but the size of the inshore fish you may come across around here...I'm sure you would be fine. If a big one comes in, just get out of the water...simple.

Don't take the jabs about the cage personal. You had to know they were coming. Just wrap a little chicken wire around...that will make it bullet proof.

I have a home made parachute you can have! I built it out of tin foil!!!

cioppino said:
I have a home made parachute you can have! I built it out of tin foil!!!

PVC shark cage? you should drill holes in it and fill with mackrel guts
Reactions: the SLIDER

Im sorry i had to look twice at that.. pvc? .. good luck, but you dont need any cage, you will be fine.

i just had a visual,driving down the freeway and a bugg hits the window!!I have often looked at the smush and its remains and i would have to say,he probobly didnt even feel anything as its wings are still flopping effortlesly in the wind stuck to the window from its own guts!!!!nice pics though!!!
Reactions: FINADDICT*

Holy Shit.....PVC...good insurance and really Big Balls!!...If my wife saw that she would be laughing all the way to the bank...Becareful out there and look out for the tax man!!

This requires much encouragement. Please video tape every minute of every adventure......no reason

Expand signature
People for the Eating of Tasty Animals

Thank you all for the laughs at my expense!! Really though, what else is a poor college student supposed to make a shark cage out of? PVC was just a couple bucks a foot, and it seems to be holding up fine. I like the idea of some chicken wire or mesh- a small shark could wiggle right in there as it is now.

I really would be much more cautious around makos or GWs though. Makos are nuts, and would have little hesitation for "testing" the cage. That being said... the next step is to try and find some bigger and more entertaining sharks. I have already tried to chum up the juvenile white sharks at San Onofre over Thanksgiving to no avail, but I know they are there. The visibility is not good there though so it's much more spooky.

Video would be sweet... I'm going to work on that. The pictures were taken with a Canon 20D in an underwater housing. I'm not really a photographer so I just put it on auto and pulled the trigger. Out of 250 a few came out good

PS. just so things are in scale (ie. not swimming with "mackerel sized" sharks), I am 6ft and the tuna head was from a 60lber- the sharks were bigger than they look in the pictures, and not just because of my mask! Smallest was 4ft, biggest was a little over 6ft.

Food for thought when it comes to trying to be in the water with nothing but PVC between you and a GW.

The Darwin Award almost writes itself.

I love building stuff out of PVC and it is pretty inexpensive. Here is an idea that might give you a few more seconds to get out of the water while the shark eats your cage -- fill the pipes quickcrete. The stuff is cheap and would be simple to pour in. The only downside is that it would make the cage pretty heavy and you might have to add a few more PFDs. Another idea is Polyester Resin. Good job on the cage and the pics.

big sharks dont like plastic they eat it!! be ye careful!!!