Been waiting non-patiently for this day to come. Was meeting up with my ex-pat buddy down in LP for a couple of days out of Muertos and one out of LP to Espiritu Santu. Previous occasions to E.S. were less than stellar, so I was holding onto my doubts. Brad picked me up from the airport with my new annual license and we headed to have lunch & beers to plan out our strategy. We were heading down to Muertos to fish with Lorenzo, a recommended panguero from Yellowklr that we've fished with before. Over tacos & onion rings (!!) I got a text from Lorenzo he had engine troubles so we were being moved over to his brother, Gerado. The next morning we left town at 5:30a.m. and made the drive south. Absolutely do not rec'md this unless you have someone familiar with the road. Brad was taking it slowly, telling me there are free-range goats and cattle along the way, and lo-and-behold, frickin' goats nearly get smashed! Get down to Muertos just as sunrise begins and if you've never seen Muertos, it is amazing to look out and realize in minutes you'll be out there! Gerado gets us out the bait boats out by Isla Cerralvo and we get our fishing started. Now, in my planning for this trip, I fully expected extreme sun & heat in the order for the Dorados that I wanted. Heat, yes, humidity, yes, sun, no! Overcast, with chances of rain! Trolled live bait exclusively even though I had packed my arsenal of assorted feathers, Raps, quen sabes quen. Picked up 5 dodos through about mid-day and called it good. I thought of some of the previous posts saying to stick around through the afternoon bite, but passed on it. Little to no wind, and good water conditions, btw. The following day, Lorenzo was ready for us when we got there at light-30 and off we went back out to get bait and troll at Cerralvo. Conditions were even better that day, but we ended up with only one keeper of moderate size (like the day before). Lorenzo suggested we try for pargo and whatever else with the live bait we had, and I got to say it turned out to be WFO..... for needle fish! Lorenzo was determined to get us one more dodo, but it just wasn't to be. The Brother was constantly on the radio and putting fresh bait on our lines but no joy. On Saturday, Brad was taking us out on his boat from LP to Espiritu Santu, so we got a bit more sleep that morning. Made it to Tecolote and got some very good bait- a bit larger than the previous days. Weather and water conditions were very good... until we hit the channel half way to ES. Winds that I've only read or heard of were making pretty decent chop of the water. we opted to push thru to find a lee side of the isla, but what we found was there wasn't a lee side at all! Frickin' wind was mostly coming downhill from the isla- weirdest thing we have ever seen! We trolled in the winds and as close to the isla as Brad, a retired professional sailor, could safely manage. Did this for several hours with other boats in the areas until we agreed it just wasn't going to be. We made our last turn for the last run and both lines lit up! Just that quick we had two dodos on, in a wind, then to realize that in the slack of the turn and the simultaneous bites, the lines had crossed big time! As Brad is beginning his fight, and cutting engine but steering us for the fight, it occurs to me I have braid, and Brad does not! I am the furthest from experienced at this predicament, but what I told him I was going to do was lessen my drag and let mine run, hoping to give Brad time to untangle the lines before he gets cut off. Surprisingly to me, it worked! We each got our fish aboard, hollering at (the wind!) and continued back to port! Each were a bit bigger than the day's before, but for us it was about the victory we had! As for that wind, go figure we crossed that channel and it all laid down!!! Didn't matter at that point!

Just as I was typing this up and gonna try to post up the pics, I frickin' shattered a tooth on popcorn I was eating so the pic will have to wait 'til tomorrow. Maybe I can figure it out while at the dentist (in TJ).
Toggle signature
Never let the truth get in the way of a good story! 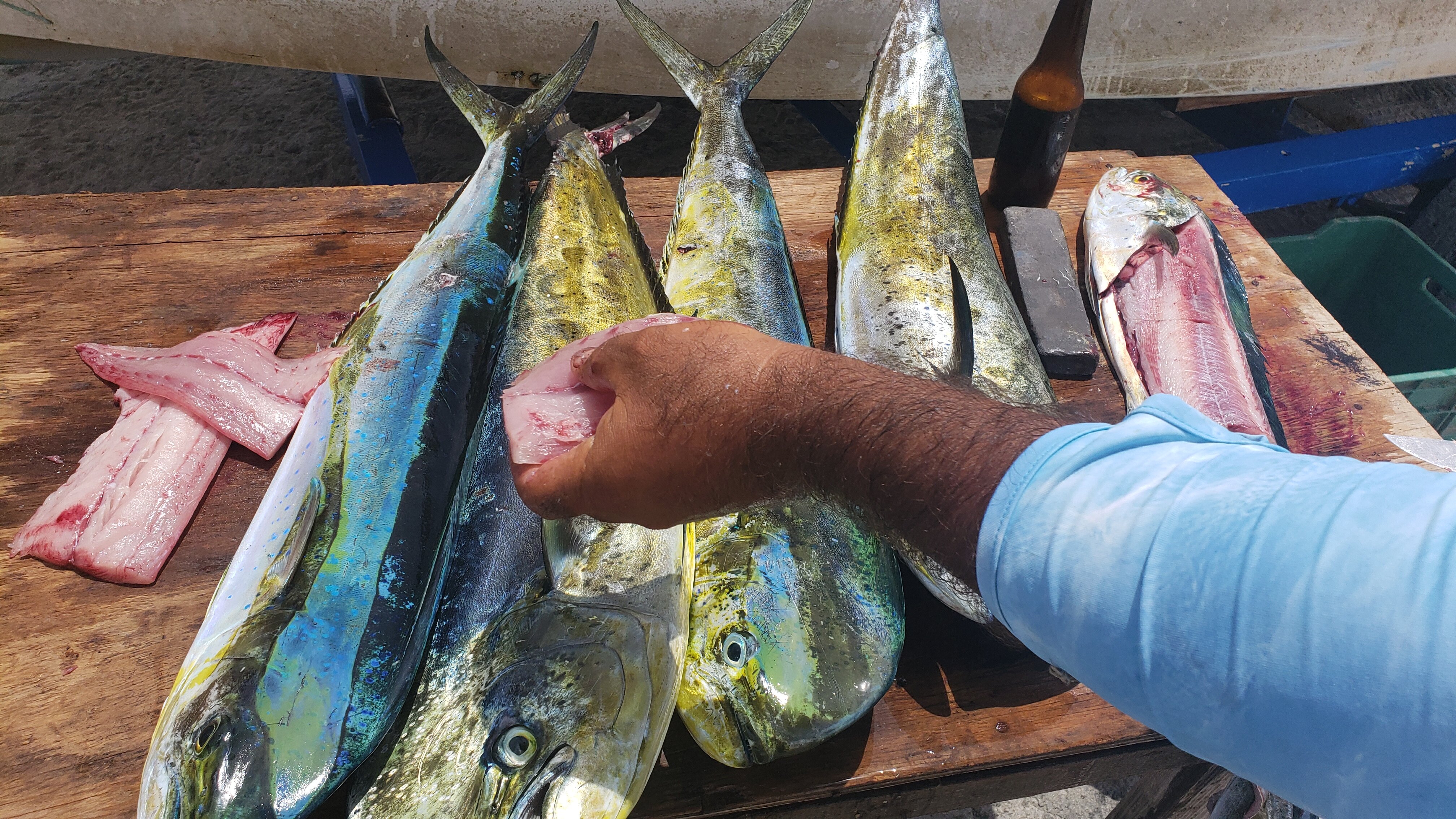 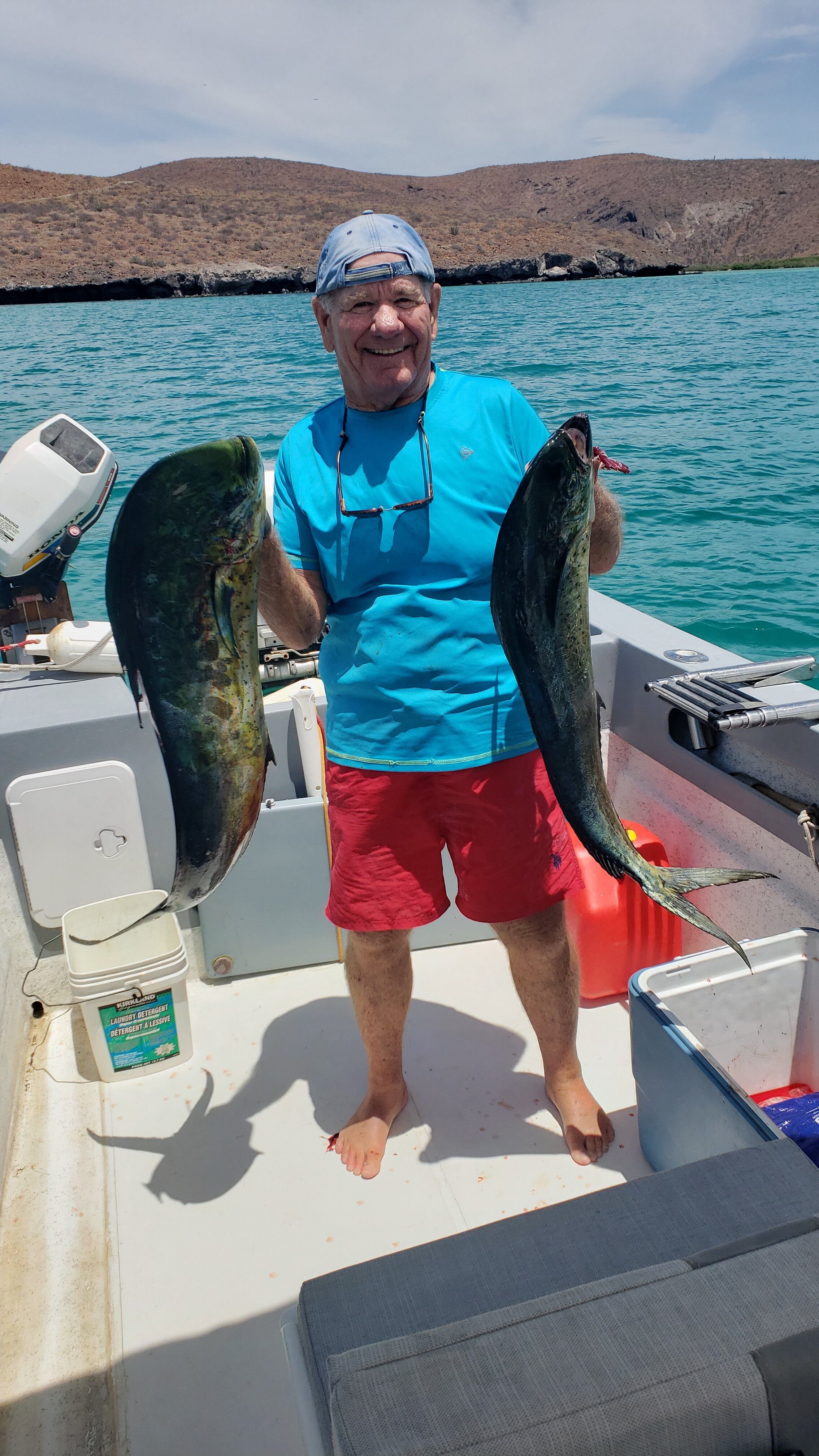 Toggle signature
Never let the truth get in the way of a good story!

Turns on the prop

I love Muertos, one of my favorite places on the planet