Summer is tournament season and while the main prize is always for the biggest blue marlin or the most marlin tagged and released, most of the tournaments also award points for ahi and spearfish and even other tournaments have categories for biggest mahi mahi and biggest ono. The oldest and by many factors the most coveted tournament here in Kona is the Hawaiian International Billfish Tournament. This tournament is usually held in August and the dates of the tournament centered around the new moon but this year the tournament coordinators decided to hold it around the new moon in late September. As a result of the late date, there were a lot fewer teams competing. That’s a mistake they don’t plan on repeating next year so the upcoming 59th annual HIBT will be held in August as usual.

There were some really nice size marlin caught this month but only one qualifying (weighable) marlin during the HIBT that weighted in at 486 lbs. Just a little over a week later in a 3 day tournament, there were two marlin over 600 lbs. weighed in and the smaller billfish tag and release numbers were good also. I’ve always said that I didn’t believe that the moon phase was as big of a deal here in Kona as it’s mainly the currents that turn the bite on and off. The currents during the HIBT were wishy washy but they formed up nicely later in the month. And the bite got better. Unfortunately for the tournament coordinators, there’s no way to predict the currents off of the Kona coast. Predominate currents are wind driven and hit the other side of the island. Because we’re on the leeward side of the island, it changes all of the time.

As I said last month, the mahi mahi bite has been pretty good throughout the summer even though it’s not mahi mahi season, it continued on this month also. Summer officially ended this month and so did the ono season. We never had a good ono run all summer. Can we all say “that sucks!” Luckily the good summer tuna bite somewhat made up for it but I personally prefer ono to tuna.


The bottom bite continued to be above average for summer and a catch that blew my mind this month was the catch (and release) of two giant trevally, back-to-back and both weighing over 100 lbs. It’s a big deal to even catch one in a whole year. I was lucky enough to catch a 100+ pounder in June but getting two in a row was really something. We also scored several tunas and two sharks on the same trip. This leads me into my close for this months report.......

Since Jim Rizzuto passed on in early July, the Kona fishery has not had the weekly fishing reports in our local paper. For many, Jims weekly reports started those Monday mornings off with a smile. One freelance writer, Mark Johnston has decided to pick up the torch and carry on with the “Big Fish List” and weekly columns in our local paper. In addition, Mark has a Facebook page that can be found by doing a search for “Kona fish report”. Make sure you use the exact wording or you’ll end up getting my reports or some other junk. I met with Mark on my boat at the harbor yesterday and while he knows that there’s no one that can fill Jim’s shoes, he’s enthusiastic about taking on this challenge. He wrote a good piece in the paper last Monday. I enjoy his writing style and I look forward to reading many more. 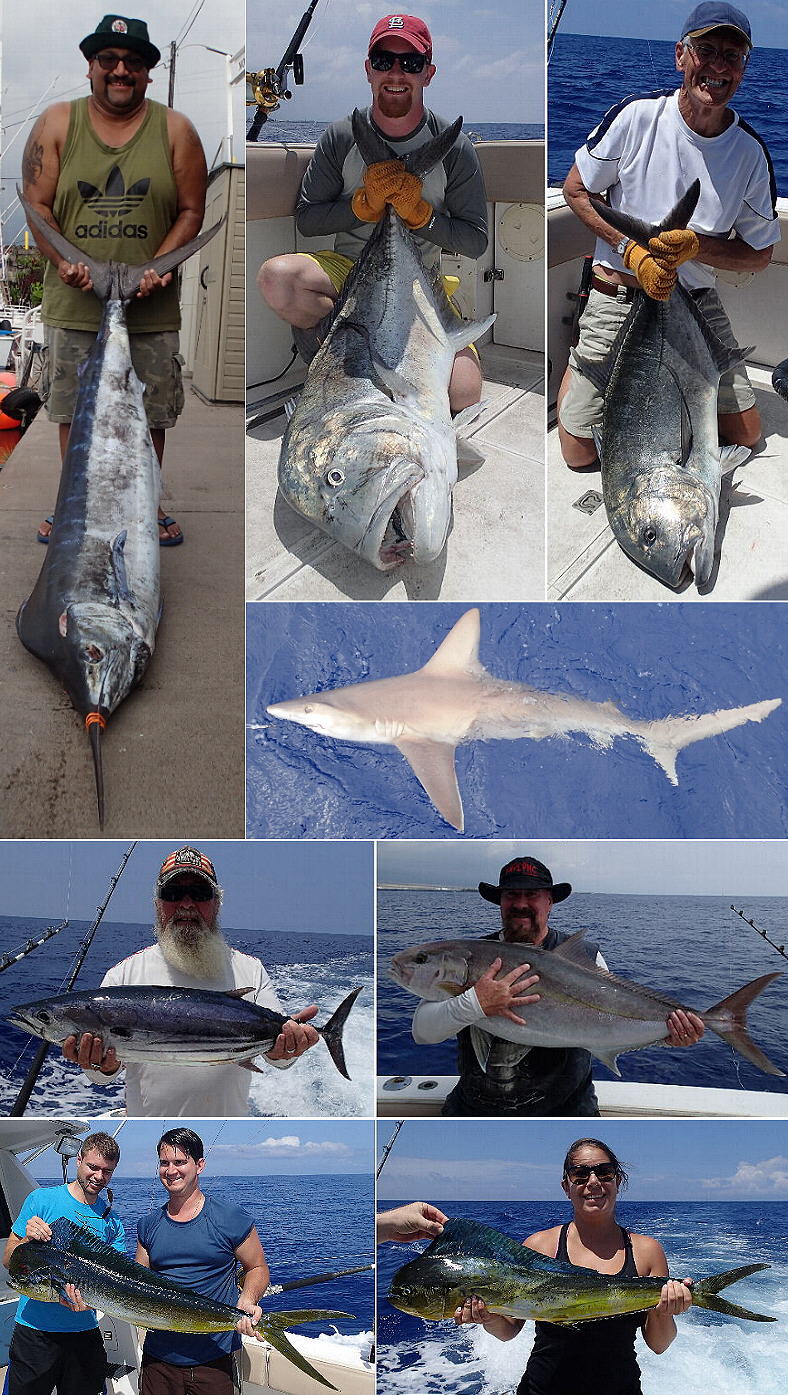 Thanks always for the reports.