This October is going down in the records as the slowest in many years. Not as far as the catch goes but because of the lack of charter business. As I said last month, September is inherently slow for tourism but in October, it usually picks up. Not this year. On the trips that I did go out, I hardly saw another boat all day. I’m one of the busiest charters in Kona so if I’m not out, most everyone else isn’t either. That’s a shame because we had a good “Beast” run this month. A “Beast” is a marlin over 500 lbs. and for the few boats that were out, there were a lot of beasts caught. We normally expect a beast run in the summer and if there had been as many boats out fishing this month as we normally have in the summer months, I think the number of beasts caught would have been off the charts. I observed another interesting thing this month. In the past decade plus, most of the beast marlin that have been caught were tagged and released but that wasn’t the case this month. Why would that be? I’m going to make an educated guess here but it’s about the money. The Billfish Conservation Act that was put into law a couple of years ago and that made it illegal to buy or sell billfish in the U.S. but Hawaii was exempted because marlin have always been part of our heritage and culture. Since the act passed, the demand and the price for marlin locally has gone up. There has been smoked marlin in the stores here for a long time but most everyone who has tried it, didn’t like it. It’s commonly found in the store isle next to the beef jerky. It’s thinly sliced like beef jerky, chemical smoked and non refrigerated. I suggest you leave it hung on the peg. But now, creeping into the local markets in the fresh fish section is the good stuff. Moist and fairly tender, these smoked marlin sticks are about an inch square and about five inches long. It’s also being sold on the streets locally too. People go nuts over it! It’s really good stuff. Of the marlin that I’ve been keeping, a friend of mine has been smoking it and selling it on the street. I’ve simply been trading my marlin for a portion of the smoke marlin and have feasting on it myself along with giving some away to friends and customers. For now, I intend on keeping this practice but if charters remain slow, I may have to start selling marlin to the highest bidder in order to pay my bills.

It’s mahi mahi season and that was the most common catch for October. There were some ahi caught this month but the lack of fishing effort made those catch numbers low for the month. We’ve also had a little bit of a spearfish bite even though it’s off season for them. Ono are nowhere to be found unless you make the long trip and high speed run to down to South Point.

Bottom fishing was just OK with sharks being the main catch. They’re a hard and fun fight! In most cases, the anglers are physically spent and there’s a sense of accomplishment to go along with it. Most of the sharks I’ve been catching and releasing have been in the 100+ lb. range.

Wrapping it up, we had another hurricane scare this month. The last one, hurricane Iselle (downgraded to a tropical storm) hit us in August and caused a lot of damage on the South East part of the island but a hit to The Big Island is extremely rare. In fact, the last time was in 1958. I used The Weather Channel app to keep an eye on hurricane Ana and I just found it amazing that some of the path predictions of hurricane Ana seemed to be projected for the sole purpose of scaring people. Historically, a hurricane or tropical storm will come pretty much directly at us in a West by Northwest direction, looking like it will hit us. Almost without fail though, at some point it will hook to a North by Northwest direction. That normally happens before it even gets close to the islands but sometimes a storm will have enough strength to continue on its West by Northwest path. Ana had enough strength to keep that path but once it passed us well to the Southwest of The Big Island, it then made the typical North by Northwest hook. Once the threat of a hit was pretty much over, the scare mongers kept warning us of a direct hit and total devastation. Scary huh? It is October though, oh, BTW, happy Halloween….. Boo! 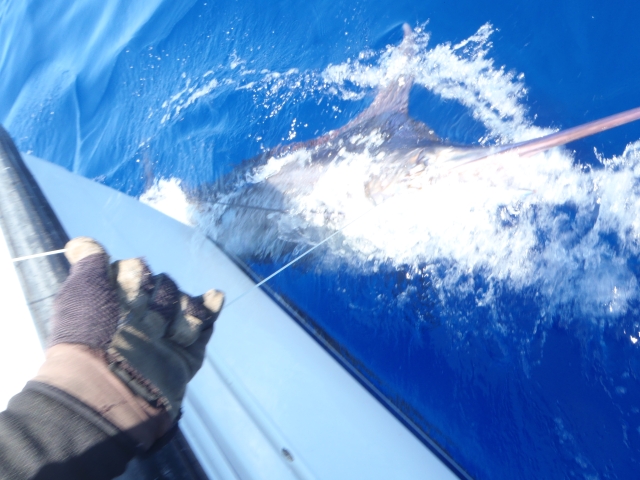 Keep in mind that the West Coast has had an incredible year for pelagic fishing offshore and no need to travel to Hawaii to catch Yellowfin, Mahi Mahi, Marlin and even Ono.

I do believe what the previous poster stated to be the case. With the amazing inshore/offshore fishing found in Southern California and into Mexican waters, the journey was to San Diego and certain points north. That would probably deflect those looking for pelagic species. I mean, I did pretty well this season and never took more than a 1 1/2 trip. Normally I have to take a 3-5 day trip to catch what I managed to do this season. Hopefully it'll pick up for the Hawaiian fishing brethren. I would like to be put on a "beast" or just try for anything on the Islands. That is one of my fishing destinations in the coming years.

I suppose that the California bite could be just another cause. I have been asked the question of "why" and I would think that the main reason is that people just don't have the extra spending $. Tourism is WAY down here and things like helicopter tours and fishing are pretty pricey items so the price tag keeps the budget tourists away. I think that the volcano might have some to do with it. Some people think it's like Krakatoa getting ready to go off here! Other people might have been waiting to see who would take control of Congress. The upper class knew that 2 more years of the same would hurt their wallets. With the Reps. now in control of Congress, it's likely that the Tax-N-Spend train will slow down. Any other ideas are welcome.

Thanks for the great report Capt. J.

If you are looking for ideas, a big stink is that of passengers not being able to keep the catch when going out with the HI passenger fleet. We have all heard that the sale keeps the charter price down, but the last couple of years in Socal $500 gets you TWO days of fishing and a freezer full of fish. Alaska has a process for shipping your catch.

Again thanks for the fish reports they are awesome.

Stellfish said:
Thanks for the great report Capt. J.

If you are looking for ideas, a big stink is that of passengers not being able to keep the catch when going out with the HI passenger fleet. We have all heard that the sale keeps the charter price down, but the last couple of years in Socal $500 gets you TWO days of fishing and a freezer full of fish. Alaska has a process for shipping your catch.

Again thanks for the fish reports they are awesome.

7 most expensive states to live in the U.S. Guess who's number one? By letting the tourist keep the fish, most wouldn't be able to afford chartering the boat.

keeping the kid hooked up

I am sitting in Kona (on business) right now, but live in So Cal. All the previous posts are accurate - we Californians that typically go to Cabo and Hawaii to get our "fix" of big pelagics this time of year don't really need to this year. For the first time in 40 years of my fishing the So Cal waters, we had the most epic year I can remember. The last 2 weeks we have even been catching Wahoo off south end of Catatalina. No record in California DFG exists of that ever happening! Not to mention all the yellowfin, yellowtail and Mahi we caught.

Another HUGE thing to consider is money. I know that I am broke from fueling my flybridge up and going out EVERY weekend this summer. Spent literally thousands more than I typically would have - but it was all worth it.