Kona is the blue marlin capitol of the world and one of the reasons for that is that blue marlin are caught here every month of the year. Most other locations are seasonal. Kona is also well known for “Grander” blue marlin, weighing 1000 pounds or more. I mentioned in a previous report that March is the month with the most granders caught but we had just one particular month of the year that had never produced a grander. Take a guess what month and why I’m mentioning it now….. Thanks to Bomboy Llanes we now have the matching set of all 12 months. Bomboy weighed in a 1041.5 pounder on the 19th after an 8 hour battle. While I’m sure that there have been several granders hooked up in the month of November over the past several years, most of the big marlin win the fight. Any “Beast” status marlin, 500+ lbs. has a lot of power and will test the strength of any weak point in your gear or any weak point in an angler. Tired anglers will let the line go slack during a fight and that’s when the fish has a chance to shake the hook out. One more interesting thing about Bomboy’s catch, to me anyway, is the boat he was using. Kona boats usually stay in Kona and when they get a new owner, they get a face lift, maybe new power and many times, a new name. One of the fun things for us old timer captains to do is point to boats and see who remembers the history of what it was named before. The boat Bomboy caught the grander on is the “Lanakila”. My dad moved to Kona in 1984 and bought that same boat with the name “Roy’s Toy” on it. Dad took the old Crysler 440 gas engines out and turned it into a twin diesel with the new name “Puka Kai”. Dad thought it would be funny to name the boat “Hole” (puka) in the “water” (kai). For you boat owners, you’re most likely familiar with this term for a boat but it turned out to be a big mistake marketing wise. Most vacationers don’t know how to pronounce Hawaiian and although puka is pronounced ‘poo-kah’, many people thought it was ‘puke-a’. Not a good name. Especially if someone has that memory of being violently sea sick during a fishing trip. I ran dad’s boat for several years and I know that the name definitely cost us business. So what does this have to do with fish? Nothing at all! But, when it comes to naming your boat, go to the internet and do a search because there’s some really good names out there. Some of the names you see on boats are just awful!

It’s mahi mahi season and that’s the most common fish being caught right now. We get a peak in both the spring and the fall. The fall run average size is bigger than the spring run so we’re seeing some nice ones come in right now. With winter just around the corner, we should be seeing some striped marlin moving in. There’s a good mix of tuna on the FAD’s, shibi, aku and kawakawa. I saw some ono flags flying lately so there are obviously some of those around right now. One thing about running the close-to-shore ono run is that during mahi mahi season, you also stand a chance of hooking a mahi mahi.

I haven’t been doing a whole lot of bottom fishing but it’s the peak giant trevally season now so I think I’m going to give that more effort for the next few months. Pound for pound, GT are one of the hardest fighting fish there is. The sharks put on a good fight too. Bottom fishing always breaks the monotony of just trolling all day. But there’s also that chanced of hooking a grander like Bomboy’s that you might be fighting for the next 8 hours straight.

Thanks for the report and good going on your nice marlin.
Expand signature
Stop Wishin' and Go Fishin'
Start Me Up Sportfishing - Maui
C

We really enjoyed fishing with you last week, it's a fish I will never forget. Thanks again for the coaching and awesome boat control during the fight. 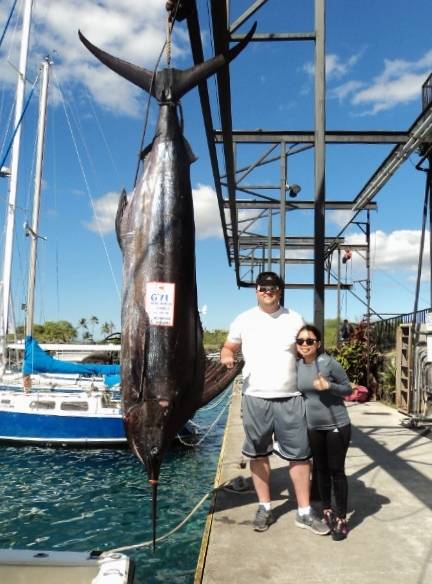