The blue marlin bite remained kind of average for May. The striped marlin season is almost over and we never really did have a good run on them this season. This month there were some good size stripes caught but just like in the past couple of years, we haven’t seen any kind of abundance. I really thought that the Billfish Conservation Act of 2012 would have had a notable affect by now and we should have been catching more than in the past few years. I still think the conservation act was a good thing and we will eventually reap the rewards with a better billfish fishery. The spearfish bite was pretty good although the peak season for those has already passed. We will see them caught throughout the summer months and there’s always a chance of a short term hot bite happening.

May kicks off the beginning of ahi season. We catch them year-round but the summer months are known for “blind strike” ahi. In the winter months, we don’t expect to catch an ahi unless we’re “working a porpoise school” but when the season hits, so do the ahi. Any time, any place hence the term “blind strike” We just had one of the best ahi runs we’ve seen in a long time for May. I hope it keeps up all summer! Another type of tuna, very misunderstood by the majority of fishermen is the Pacific skipjack. The reason I say misunderstood is that Pacific skipjack is the most commonly consumed tuna on the planet and most fishermen don’t know that fact. When you buy “chunk light” tuna in the can, you’re eating Pacific skipjack. In the Atlantic, there are also skipjack tunas but for some reason, they just don’t taste good. When you say “skipjack tuna” to an East coast fisherman, you can see the “yuk” expression on their face. Here in Hawaii, the small skipjacks are used for bait and rightfully so. While the meat on a small one isn’t bad, it’s not good either. Once the skipjacks get 10+ pounds, the meat really starts to change. A 20 pounder has a taste and texture even better. We normally see the big skipjacks in the late summer but they’re here now.

We’re still in mahi mahi season but there’s not many around. Ono season starts in May and we had a really nice run for a little over a week this month and then it slowed way down. Last year the ono season was a disaster. It started off real good in May of 2016 and then we had a storm come in that churned up the nearshore waters. That’s where the ono hang out. They left and never came back. I got really excited last year when ono season started off so good but this year, because of what happened last year, I’m taking a “wait and see” attitude.

The bottom fishery is usually a mix of sharks, amberjack, almaco jack and trevally but this month is was pretty much all shark catch and release. I even caught and released a hammerhead this month. A shark I haven’t seen in about 5 years. The most common shark I catch and release is the sandbar shark. They’re a strong fighter and average between 50 and 200 lbs. Sandbar sharks were commercially caught in the Atlantic to the point of near extinction until they became protected there. The Hawaii population is not regulated but appears to be very healthy. I’ve only killed a couple over the years. One was my daughters 2nd world record and another I ate because another fisherman told me that they were good eating. It tasted like shark. It’s not unusual for me to catch the same sandbar sharks over and over and over again so as long as I keep releasing them, they’re the perfect “sustainable fishery”. 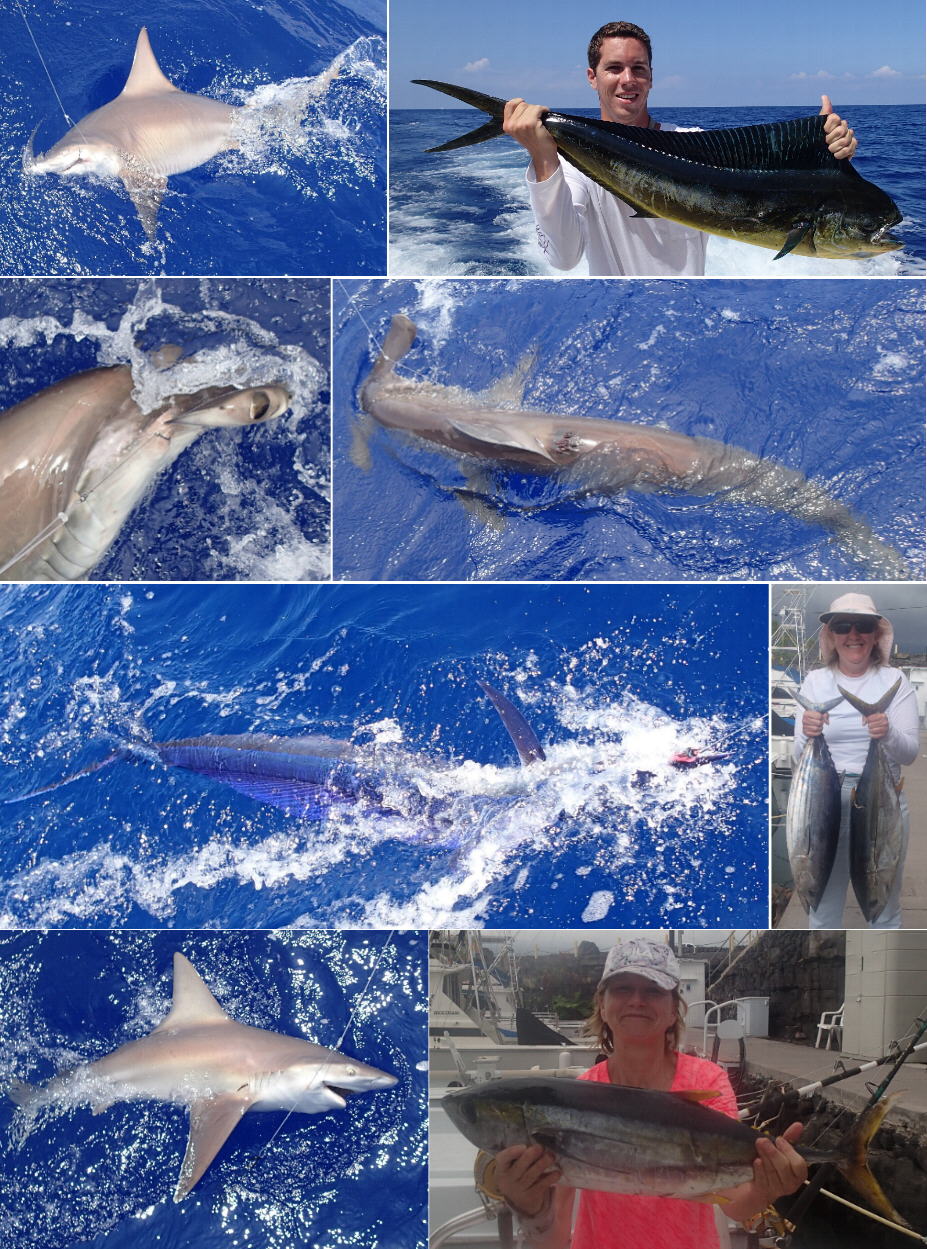