The blue marlin bite has been pretty good so far this winter even though it’s not the season for them. Yes I said the same thing in last months report and I will redundantly repeat that it’s striped marlin season now but that bite isn’t happening. We should have seen more stripes this month than we did in December but they have become even rarer. It’s a good thing the blue marlin are taking up the slack. With two more months to go for the peak of the striped marlin season, I will remain hopeful that they are just off to a late start. The spearfish bite has slowed also but we are just now entering the peak of their season.

There’s been a few ahi caught in the porpoise schools but with our best FAD’s still not replaced and the offshore fish farm still not replaced, the winter bigeye and shibi (smaller ahi) catch will be nearly nonexistent. Luckily, while not the delicious quality of the bigeye and shibi, the otaru size (10+ lb.) skipjack tunas have been in abundance outside of the Kona airport. That’s normally a late summer thing with them. There’s still a few mahi mahi being caught and even some ono. More ono are being found offshore than nearshore where we would normally expect to find them.

The bottom bite was pretty good this month if I could catch the right bait. If I catch the otaru tuna, I can cut some chunks and send them to the bottom but the small fish tend to gang up on the pieces like a bunch of piranha so that hasn’t been working out so well lately. Luckily the frigate mackerel are back and because those baits look more like they might bite back, the little fish tend not to be so aggressive at picking them apart, leaving ample time for the bigger fish like giant trevally, amberjack and sharks to get at them.

It’s a new year and a new “Big Fish List” has started. Common fish like marlin, spearfish, ahi, mahi mahi and ono get on the list right away but the less common catches take a while to fill. If I wanted to kill a giant trevally just to get on the list it wouldn’t take much effort. Same with amberjack and just six days into the new year, I caught a 100+ amberjack that I could have killed to get on the list and it could possibly have been the biggest for the whole year but it came up real healthy so I let it go. A fair amount of the time, the bigger jacks just don’t survive coming up from the deep. Deep is a relative term so how deep is deep? I fish 400 to 600 feet down. Yes, that’s DEEP! I’ve been fishing the deep for two decades now and still, every once in a while, I get a surprise. One fish I occasionally catch while dropping bait down or bringing it up is the great barracuda. In all my years of bottom fishing, I’ve never hooked one on the bottom until now. It was a big one too. One of the biggest I’ve ever seen. I had no problem killing that ugly predator and weighing it in. It came to 39 lbs. so yes, I did make the “Big Fish List” only because it’s the first one of the new year to be submitted (even though I caught and released a smaller one earlier this year) but because of the size of this one, it’s very likely to stay on top for the rest of the year. 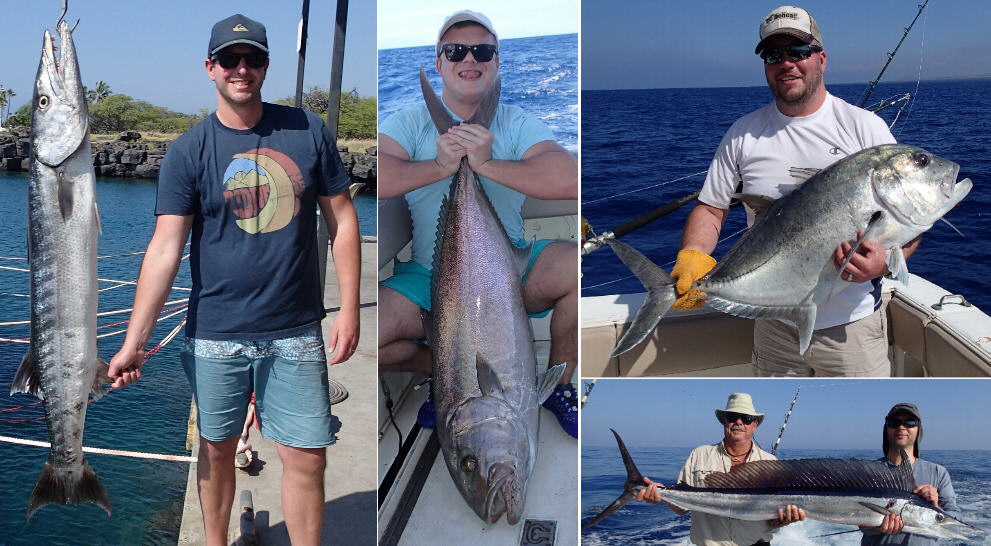