I took the Dave and Doug Nilsen and Ben Secrest from Accurate Reels out on Thursday. The plan was to catch a couple yellowfin or kelp fish and then head to the BFT grounds to skip the kite around for a possible jumbo.

Got a few passes of fire hot sardines from the bait barge and picked up 20 macks or so right next to the barge. Weather on the way out was perfect.

About 5 miles west of the 182 we started to find the life and lots of YFT from 15-100#'s up and boiling. Just like all season, they were skittish but we were able to get them going on the chum. Doug and I were able to both hook and land a solid #20 YFT.

After a few hours of chasing the YFT, we put the kite up and started skipping the Yummy flier looking for a BFT (or a big YFT). After about an hour of skipping we came into a new zone and I immediately started to meter giants. Meter mark after meter mark we knew we were in the right zone. 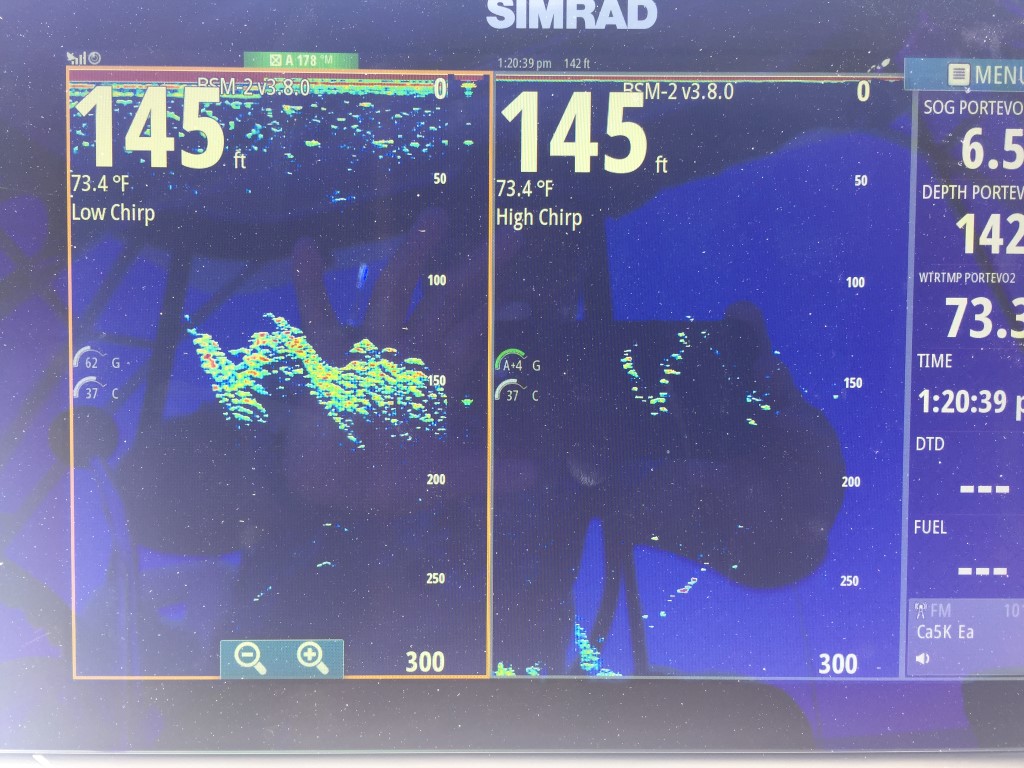 It was surprisingly quiet for another hour or so. Then just after 2pm we get a bite and miss. Ben's screaming after he saw the bite and we have another fish come clean out of the water and land on the Yummy.

Doug grabs the rod, winds like hell and we are tight! The fish immediately took off across the surface (good sign of a bigger fish). Once the fish settled in we put Doug and the boys on the bow to fight it from there. We hooked up on an Accurate ATD 50 and a Seeker Rail Rod. The bow rail on the Jihad is the perfect height for rail rod fishing. 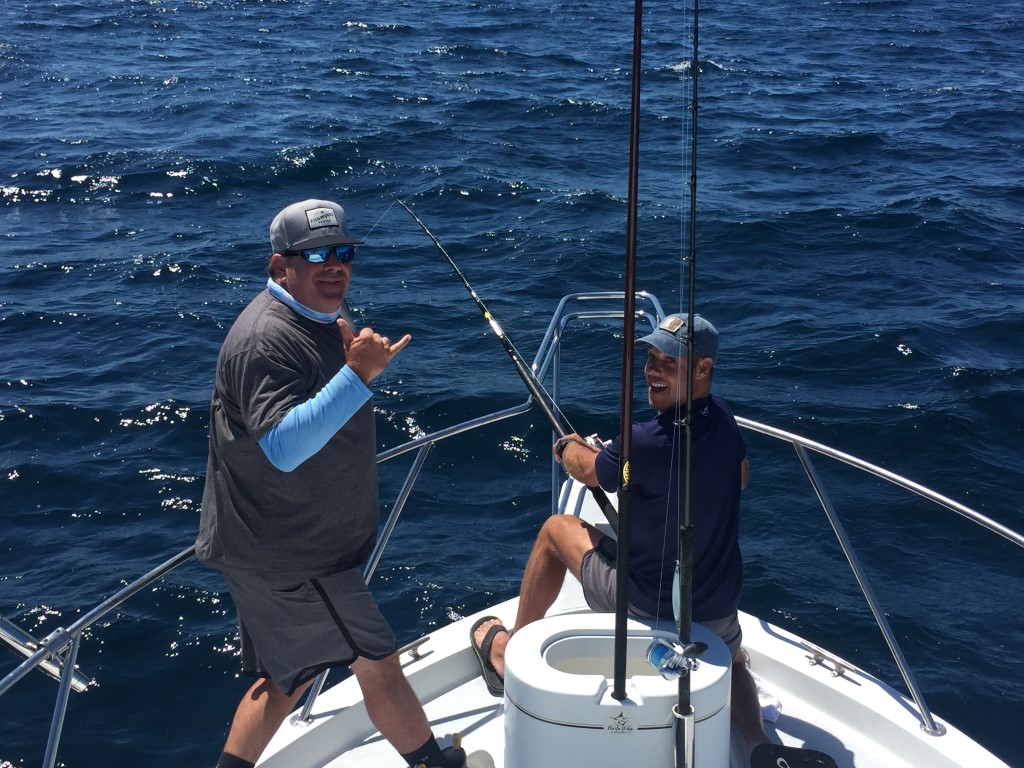 From there I maneuvered the boat around to keep us on top of the fish. Doug did his job and in under 40 minutes, godzilla was dead.

We saw the fish roll once and knew it was a good one, but once it hit the deck it really soaked in. This was an absolute slob. I just sat there in shock staring at this amazing creature we were lucky enough to land. 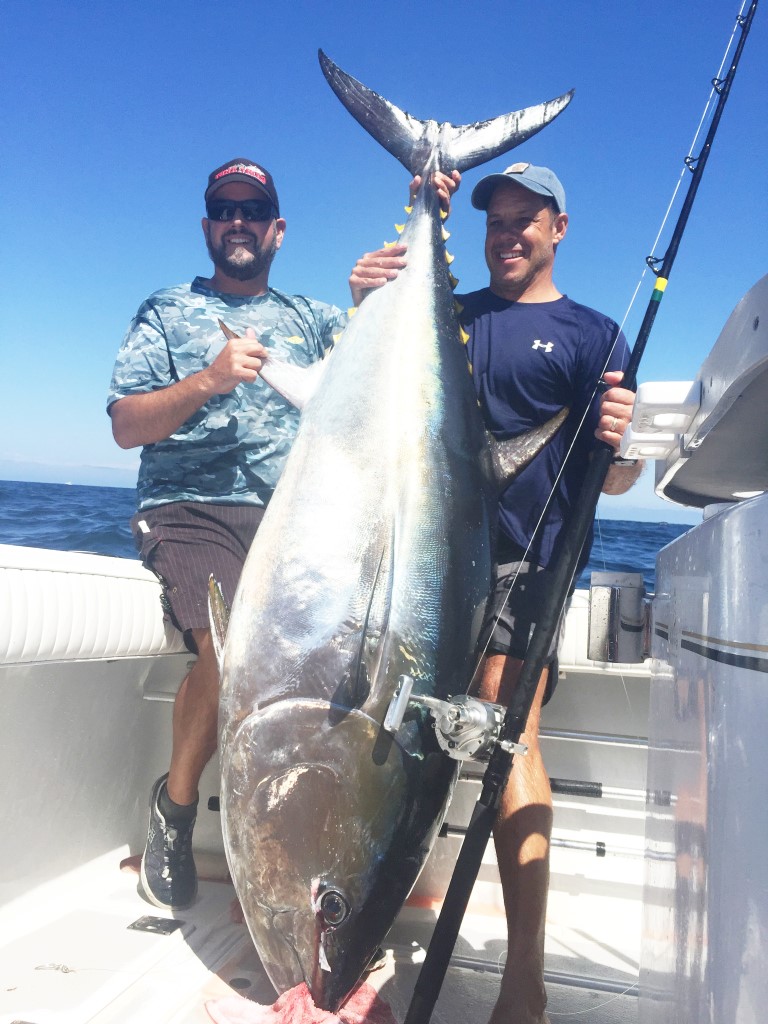 We actually managed to get the beast into our kill bag and fished for another hour before we had to head in to hang the fish and get a weight.

We backed into the marlin club and hoisted the fish off the boat. Just seeing it hang next to the boat was one of the coolest things ever. 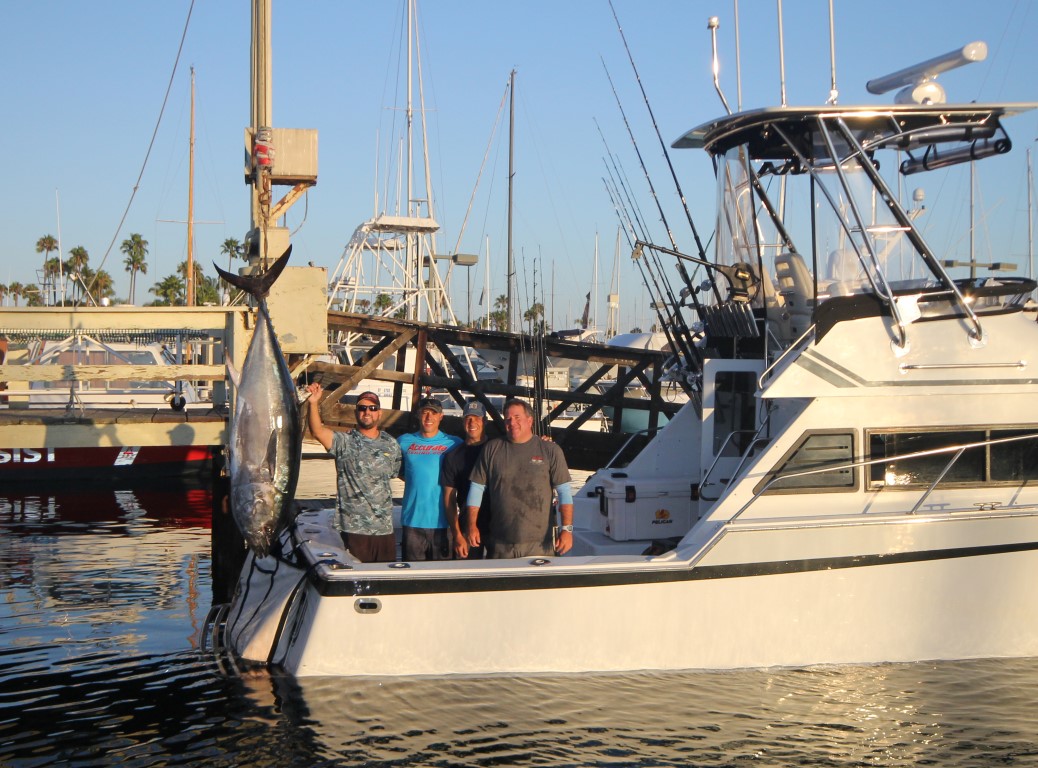 We transferred the fish to their gurney and then put it on the big spring scale. 274# of awesomeness. 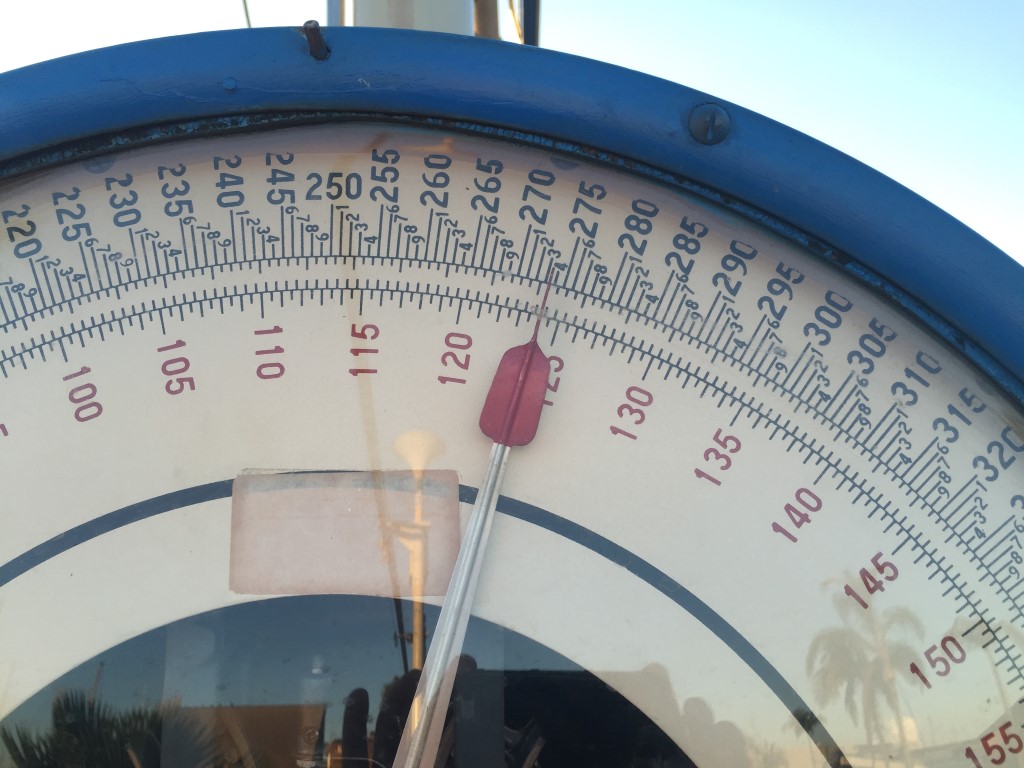 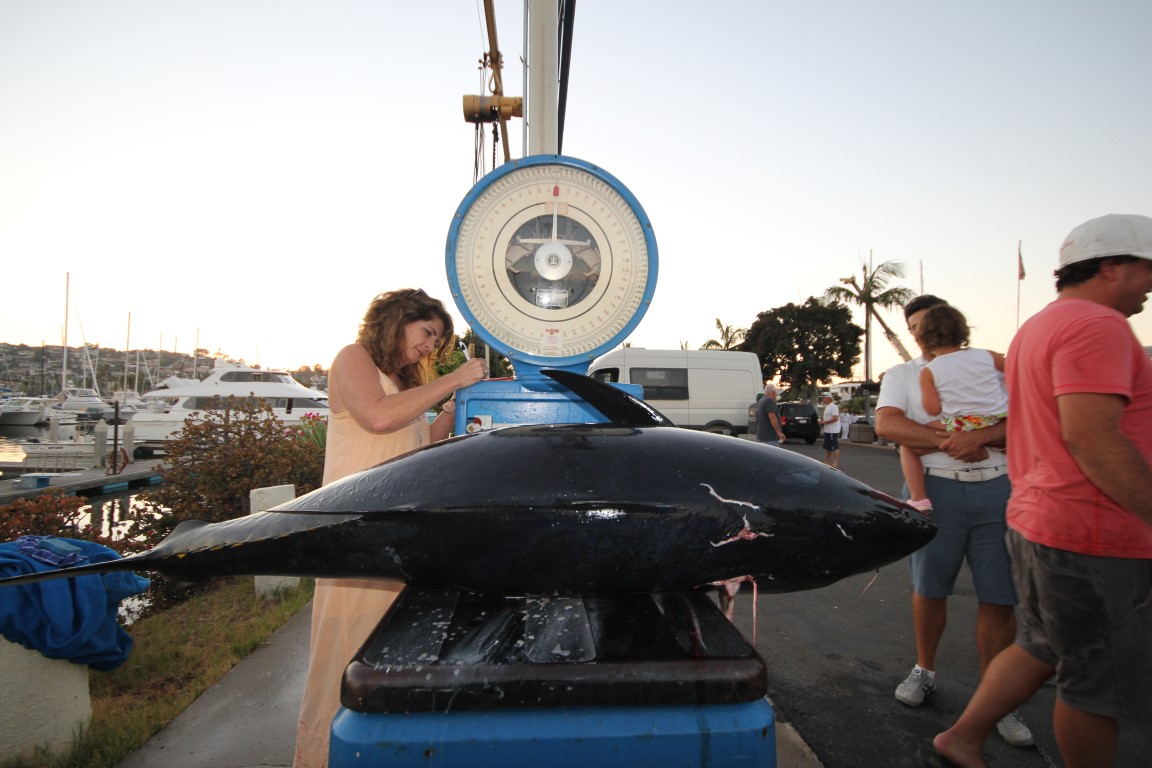 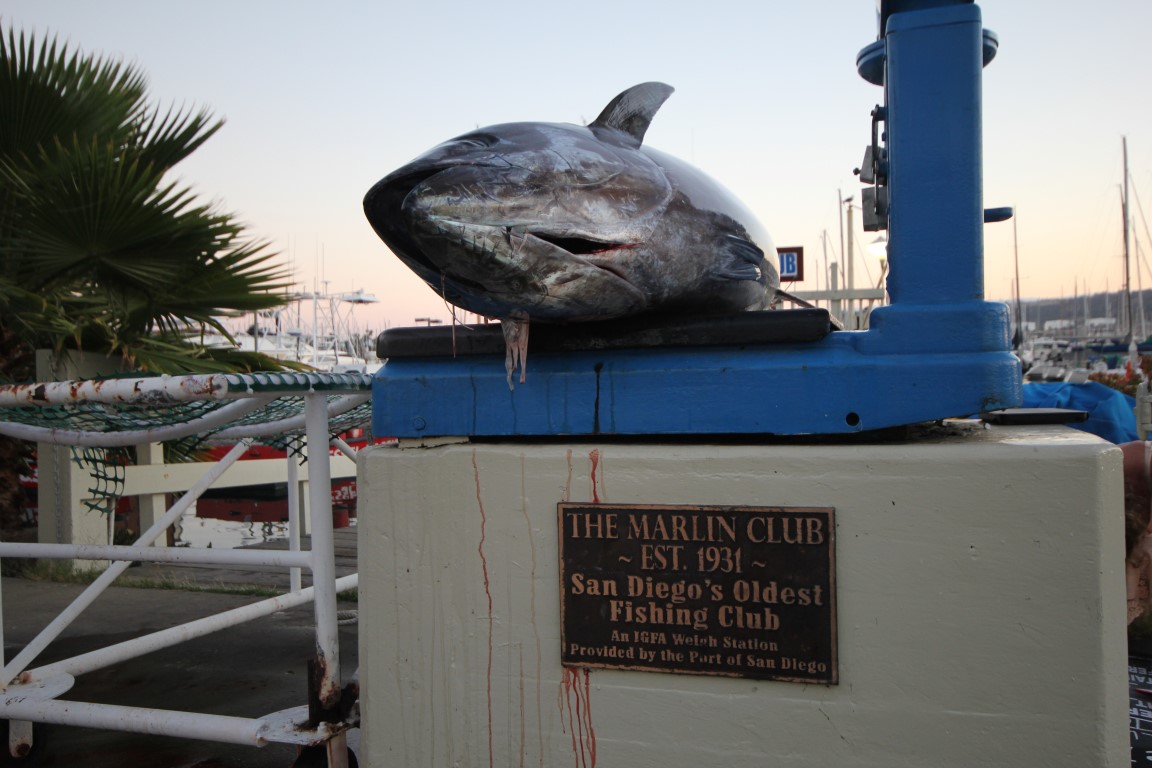 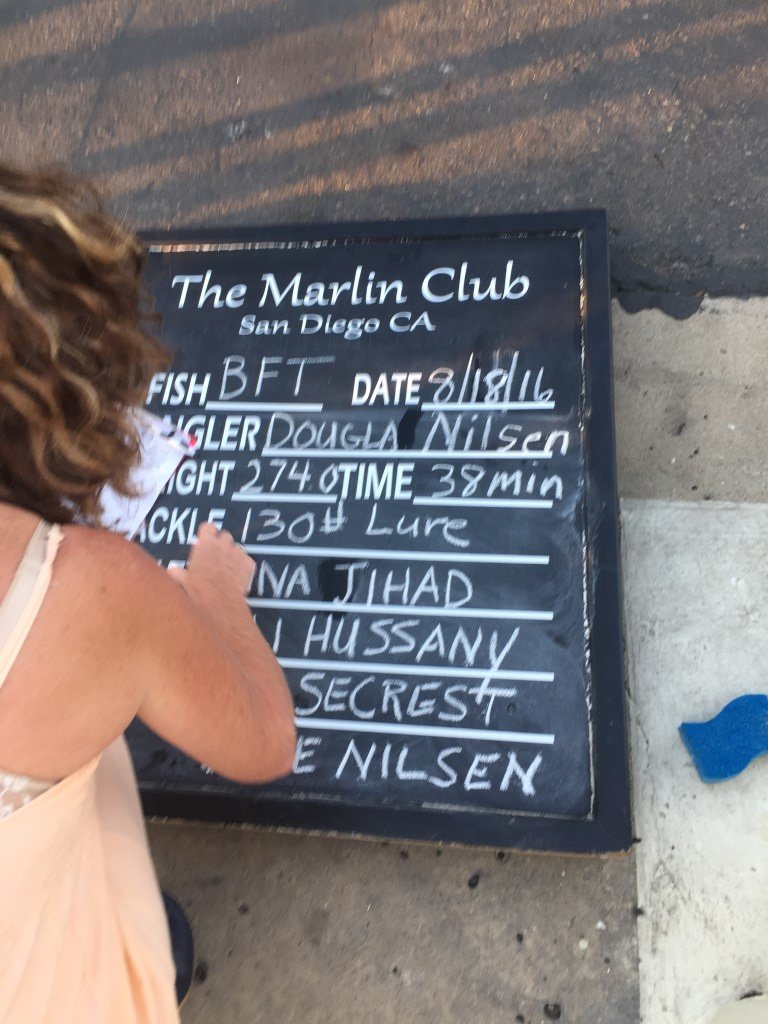 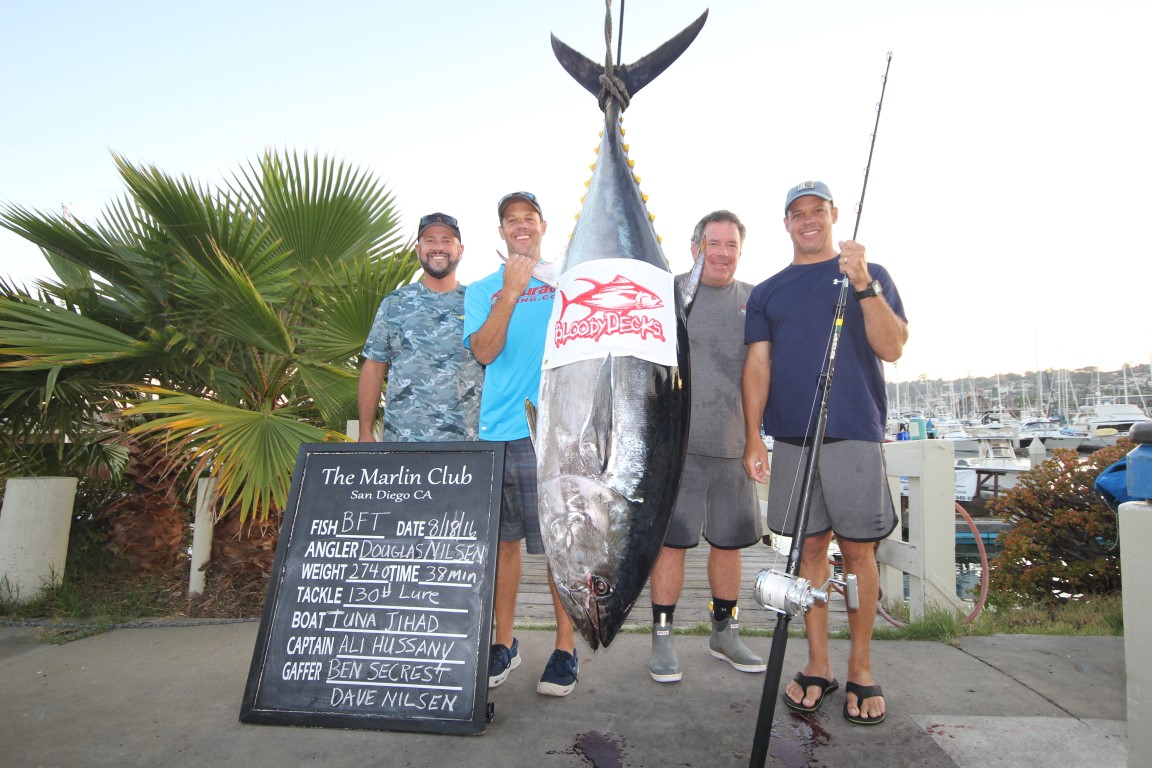 We took a ton of pics and Jason came down to help out. We backed Jason's truck under the fish and he ran it off to Mario's for processing. 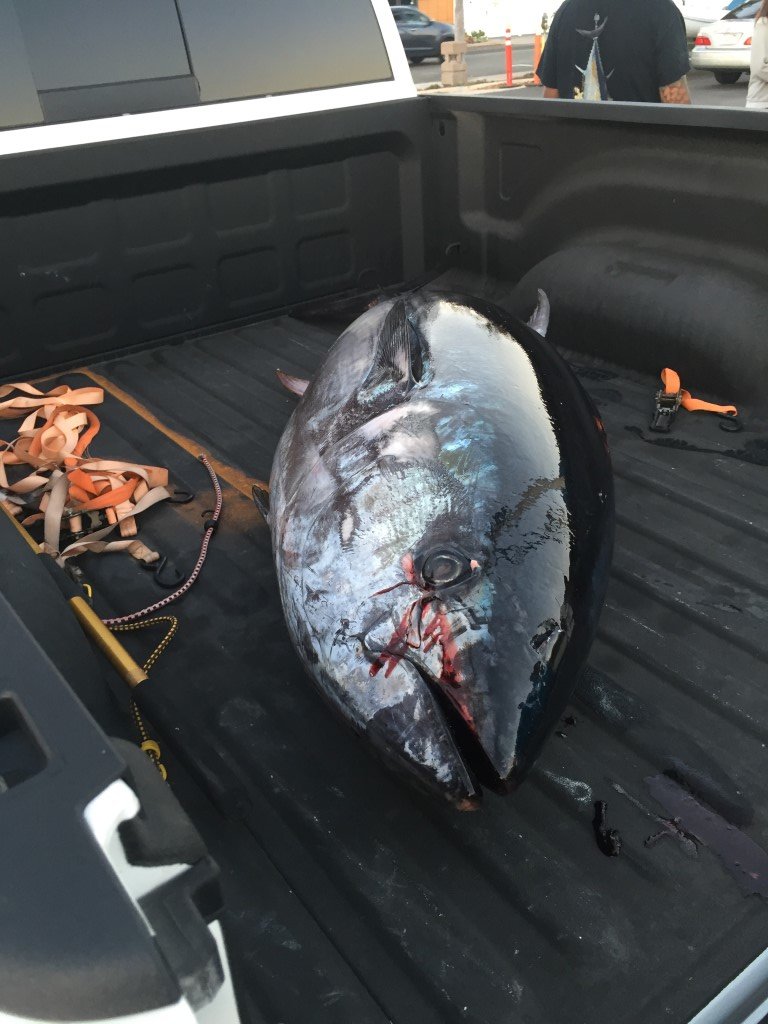 Sitting here a couple of days days later I'm still in awe. Two years ago I could never have fathomed catching a fish like this in my backyard.

I want to thank Ben and the twins for coming out and making this happen. They are a great bunch of dudes. Days like this are the kind you will never forget. I am still stoked beyond belief.
Reactions: martman, Ctony.clark, doncatfish and 47 others
Upvote 0

Absolutely amazing catch! Great job and thanks for the detailed report.

Congrats on a dream fish!!!

Fantastic report, Ali! A fish of a lifetime for most!

Curious, what does a "Yummy" lure look like?
Upvote 0

Great report ! Beautiful Fish !
Toggle signature
The Killer in me is the Killer in you
Upvote 0

Great report and fantastic catch! Pretty amazing to have these fish around this year.
Upvote 0

Wow! That's an amazing fish and great write up.

Ali you really are living the life right now. First that huge sword and now this giant.
Upvote 0

I don't know whether to give u props or continue hating! Killer ali!
Upvote 0

So stoked for you brother! Thanks for the belly cut!
Toggle signature
Yusef Hussainy
619-277-2169
Need a home? Need to sell your home? I can help.
www.CalRealtySD.com
Reactions: Diegoluv
Upvote 0

Luckily you can now text me from offshore now so I knew you got a jumbo on the day I didn't go... not to mention other nice pleasantries I got via satellite text lol.

Pretty sure I know the reference here. ND??

Pretty sure I know the reference here. ND??

What an amazing fish Ali especially with your rig being down for most of the season, congratulations the girth on that fish is huge! This one is going to a hard one to beat.
Toggle signature
ToadsToadsOnly "Go Big Or Go Home"
Upvote 0
Show hidden low quality content
You must log in or register to reply here.

Offshore I wish the albacore would come back