Boarded the Islander and was off the dock by 6ish. The boat was already filled with bait and the captain said we were shooting straight for the grounds, ETA 10pm. I rack out at 8pm to try to get some shut eye before the double shift of fishing. I miss the first announcement that we're on the grounds and wake up to "that's why we came out here, for the quality of fish like that!" Jump out of my bunk and we're on the board with an estimated 120 model. Shortly thereafter the boat lands 4 others all in the 100-120 range.
I flatfall until the sun came up. Sore shoulder and partially cramping, captain decides to move and I chalk it up as a loss. It takes a few hours before we stumble on our first kelp, surprisingly this one was holding some 8-12 pounders and I bag up two. The monkey is off of my back.. kind of. Kelp #2 produces rats. I bounce it onto the deck and as much as I wanted to throw it back, I knew this was bluefin fishing. In the sack it goes.
We boat around looking at empty kelp after empty kelp. Finally we find a kelp that was holding and we make a stop. Those yellows turned into big ass bluefin boiling on the chum. Three people hook up on the wrong gear and all three bluefin are gone. Everyone changes tactics and it turns into a slow plunker bite. Flat fall, sinker rig, live bait, colt sniper. It didn't matter what you fished, you just had to be in the water in the right place at the right time. I just couldn't find that place and that time. I run to the wheel house and the meter was a river of red from 20-40 fathoms the whole damn time.
My first bite was around 5pm on the drop of a colt sniper. I was getting smoked, added drag and pop.. gone. The bait looked good but swam like shit. I got desperate and fished 30, got smoked again. Around 7pm I found Michael Phelps... that dine swam straight down to his death. Hook up! He goes for his first run.. 2.. 3.. strike.. as I'm about to get spooled I go to full and I stopped him in his tracks. Kept the drag tight and killed it in about 15 minutes. Second gaff strikes his head and I celebrate like a kid hitting a 9th inning walk off. Made it just in time for the last call for dinner.

Pete is a hell of a captain. Worked his tail off the whole trip. The crew was excellent and very attentive. But that chef... his craft was impressive.
Highly recommend this boat.
Cheers! 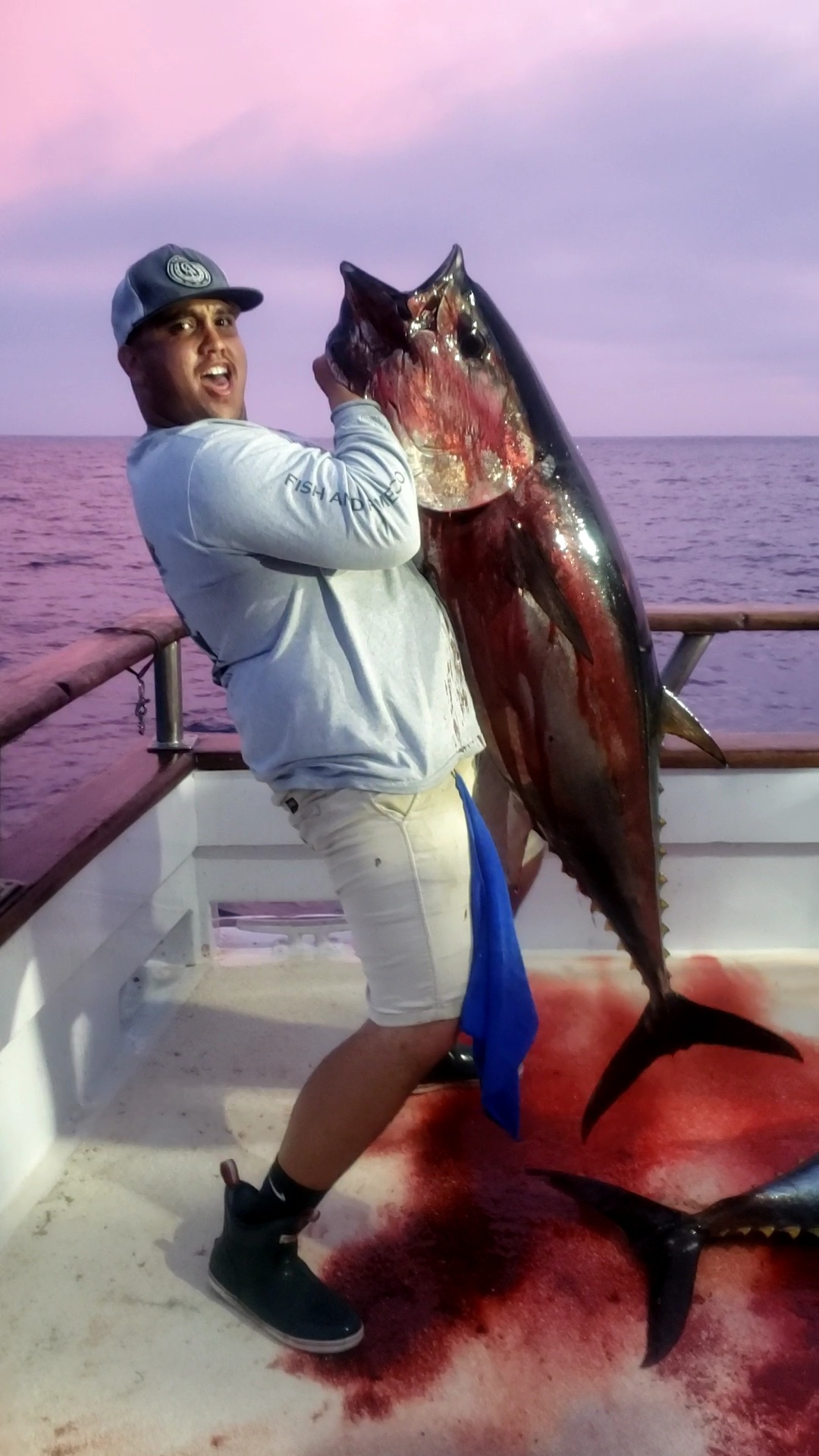 Sweet write up and sick pic!
Congratulations on your new PB.
Reactions: Blackfish and palella09
Upvote 0

Congrats and thanks for the write up ! Lots of lessons to be learned from your experience

Never give up!!!!
Reactions: Peg North and palella09
Upvote 0

The Tug Is My Drug

Thanks for the report. I'm headed out tomorrow for a 2.5 on the Islander. 1st time on this boat and have heard nothing but good things about. Super stoked!
Reactions: palella09
Upvote 0

Hell yeah! Patience pays off. Thanks for the detailed report.
Reactions: palella09 and Tunahead
Upvote 0

Well another favorite Fishing Shirt straight to the Trash Can you'll never get the stench out of that one but well worth it! Great report and Congratulations on a nice catch and way to stay with it. I can't tell you how many times I've done the same thing dropped down to 30 just to get bit and had the same thing happen only to get a 60 second thrill.
Reactions: palella09
Upvote 0

Great report and read and NICE FISH. Bluefin fishing is like
Baseball= gotta fish all 9 or extra innings.

Glad ya got one.
Reactions: palella09
Upvote 0

THAT is how you report! Great write up. People need to be hydrated and rested.

Tore up my hand, tendons, fishing like 18 hours straight.

Congrats
Toggle signature
"Never engage a fool in a battle of wits..."
SanDiegoFishingClub.com
Home of the Outcasts
Reactions: Tunahead and palella09
Upvote 0
B

DOGHOUSE26 said:
Well another favorite Fishing Shirt straight to the Trash Can you'll never get the stench out of that one but well worth it! Great report and Congratulations on a nice catch and way to stay with it. I can't tell you how many times I've done the same thing dropped down to 30 just to get bit and had the same thing happen only to get a 60 second thrill.
Click to expand...

If you muck up a polyester shirt like Pelagic or one of the others, Oxy Clean is your best friend
Reactions: palella09
Upvote 0

That is a Stoked look right there. Great job
Reactions: Tunahead and palella09
Upvote 0

Well done everyone thinks it so easy to get one and it not way to grind it till the end.
Toggle signature
Work to live and Live to fish!

Likewise! It was fun sharing the rail with you, catch you on the next one

awesome report! hoping for that kind of luck when I go on a 1.5 eventually
Reactions: palella09
Upvote 0

Good job OP. Looking to jump on the Islander on their 6/2 1.5 dayer. They only have 2 people on the trip as of now.
Reactions: palella09
Upvote 0

YEP...been awhile since I fished it, but always been fishy

Thats what it's all about right there!!
Thanks for the report.
Reactions: palella09
Upvote 0
Show hidden low quality content
You must log in or register to reply here.