After trying (and failing) to make some bait for lobster last week, we decided to do some actual fishing on Sunday. We heard a few scattered reports of yellowfin with dolphin, so we brought a few heavier setups. We launched around 9am and were greeted by nice weather, just a little bit breezy/bumpy but a very small swell. Given the good weather and a nice forecast, we decided to check out the 267 before heading inside to catch some bass.

We ran out to the 267 and found much colder water than a few weeks ago, around 68 degrees. Fished a couple paddies but they were all dry. There was plenty of bait on the bank, but not many birds or dolphin, and very little sign of gamefish. After driving around for a bit, we decided to point it to San Onofre to fish bass.

About 5 miles or so off of the domes we spotted a pretty big pod of dolphin. While we've seen them plenty of times, these ones were putting on a show, and we were watching them back flop, tailwalk, and leap 10+ feet out of the water. They were super playful with the boat so we figured they weren't holding any fish. I swore I saw a tuna leap out of the water like a dolphin, but my brother convinced me it was one of the baby dolphins. We drove through them and as I was circling around, I noticed more violent splashes coming from the outer edge of the dolphin. I eventually realized what I was seeing when a tuna cleared the water off our bow. Once I realized that I wasn't just seeing dolphin, we put the camera away and instantly dropped back a trolling spread consisting of Mexican flag and blue/white Zukers.

The fish were a little boat shy, but it seemed that as soon as we drove beyond the school, they would pop up under the birds and start crashing on bait. We dragged our 2 troll setups while also watching the birds and trying to get a few casts onto the tuna with a coltsniper. Water temp was warmer, around 70-71.

After 15-20 minutes we got a strike on the blue and white Zuker, although it wasn't a very aggressive bite. We both kind of looked at the rod in disbelief before my brother said "oh, biter". I unclipped the troll rod and adjusted the drag while winding on the fish, and began to feel head shakes. The fish was super squirrely, and basically charged the boat while I wound in the line, desperately trying to keep up with my 4:1 gear ratio Avet. After a minute it was at deep color, and we got it close enough to see a nice yellowfin tuna. The fish eventually spotted the boat and quickly peeled 30 yards of line off my reel. Shortly after it was back at color, making somewhat erratic circles towards the boat. It took a few tries, but I eventually got him close enough for my brother to stick a gaff right underneath his gills and haul him into the boat. We were very focused on boating the fish, but freaked out once it hit the deck. It was a nice yellowfin, and weighed somewhere between 18-20 lbs on the scale at home. We were probably trolling between 6-8 knots, and got bit on the shorter troll line, about 40-50 yards back. The zukers were rigged with a short 100 lb leader to a large 2-point trolling hook.

After we calmed down, we bled the fish and cleaned the deck as best as we could, and pumped a lot of blood out of the bottom of the boat. We were able to relocate the dolphins fairly quickly, as they continued moving north. We continued following the dolphins and tuna for the next hour and a half, and ended up just 5 miles from Dana harbor. We did get one more strike on the same zuker, but we killed the motor a little prematurely and had the drag set a bit loose so that one got off. Also had a few chances to cast on breaking fish and drop on meter marks, but weren't able to connect that way. Made a call on the radio before we left and one boat came and joined us, so hopefully they were able to get one too. Although the fish were still there, we eventually decided to head in to ice down our fish. A short 15-minute run later and we were back at the ramp.

We had set (and accomplished) the goal of catching a legal lobster and yellowtail this year, but a tuna was definitely a bonus. It's not every day where you can have a shot at tuna with the SC pier in the background. After missing 3 bites on the bigger bluefin earlier in summer it was great to be able to get one in the boat. 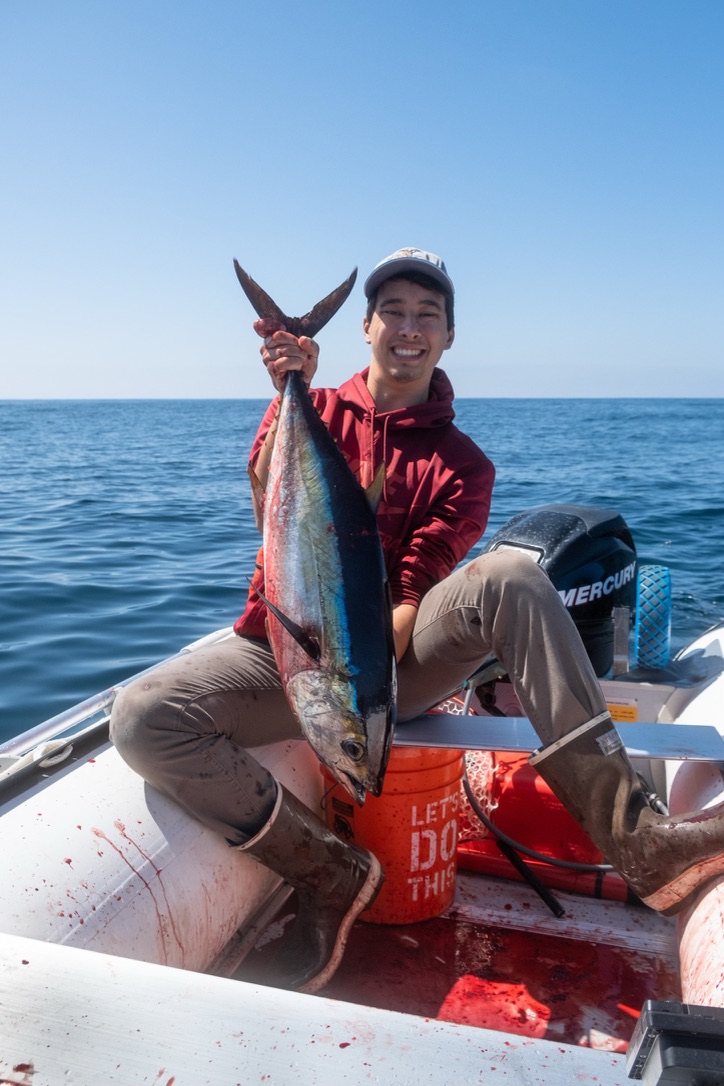 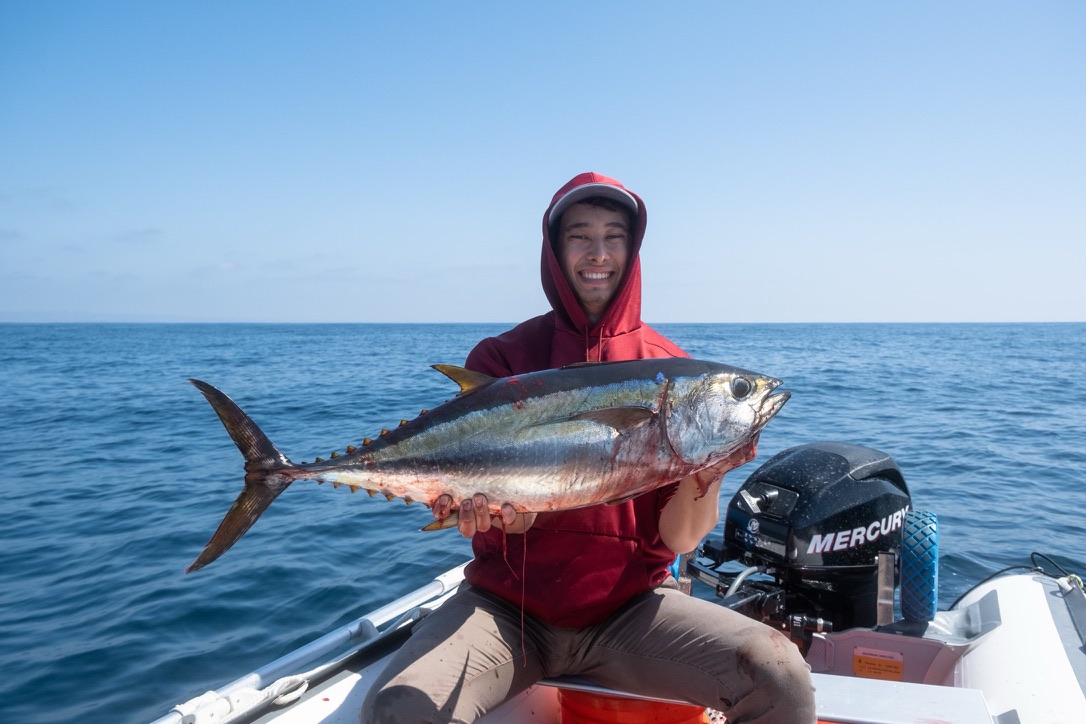 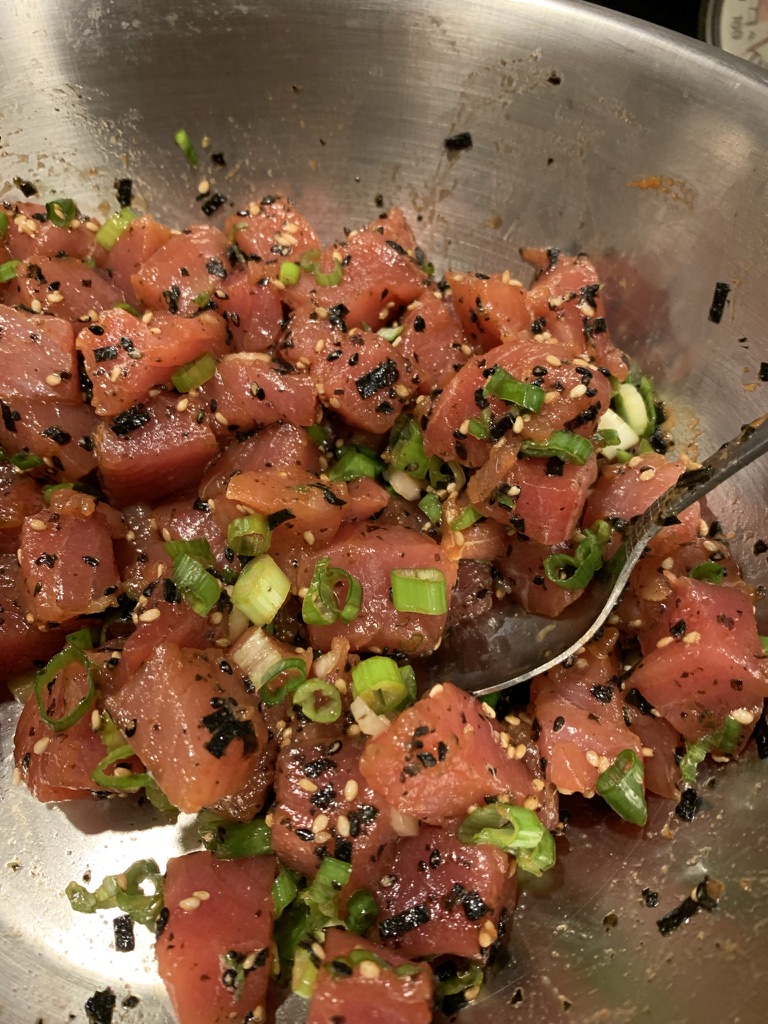 Great post brother. Many times.... its the seldom seen yet sognifcant "details" that make a difference between great days.... and an all day boat ride.

Great Report/info/pic and NICE Yellowfin.
Solid work in the inflatable! Who's next?
Tunaslam Cory and Lal in Rubber Ducky?
Could be if they see this report.

Great job guys, it you saved the bits you have a start on your bug bait which is more than I have!
Reactions: Sebastian Hong, woodfish330 and Tunahead
Upvote 0

Thanks for the pics and report.
Toggle signature
-AH
I get skunked and I can not lie
Reactions: Sebastian Hong, woodfish330 and Tunahead
Upvote 0

Way to stick it out and pay attention to the details.
Reactions: Sebastian Hong
Upvote 0

That Tuna on that boat is pretty bad ass I must say! Way to go Big!
Reactions: woodfish330
Upvote 0

Tunahead said:
Great Report/info/pic and NICE Yellowfin.
Solid work in the inflatable! Who's next?
Tunaslam Cory and Lal in Rubber Ducky?
Could be if they see this report.

they did get tuna and dorado on kayaks out of DP this year....
Upvote 0

Awesome job on the fish, glad you got one on the boat! Nice pic, thanks for posting the report! CONGRATS!
Upvote 0
S