Offshore I wish the albacore would come back

Well the boat ended up being down for 5 weeks but we finally found the cluprit. A tiny pin whole in one of the fuel lines that was in the transom glass.... Always fun.

So with the boat fixed and running it was time for a tuna trip ASAP.

We left the dock at 4 AM and pulled the throttles back 5 miles East of our numbers around 8:30 AM. There was ZERO wind, great for the ride not so great for albacore fishing with the kite and dead stinky mullets. We started marking smaller wolf packs of fish almost immediatly at 150' but they didn't have any interest in anything. 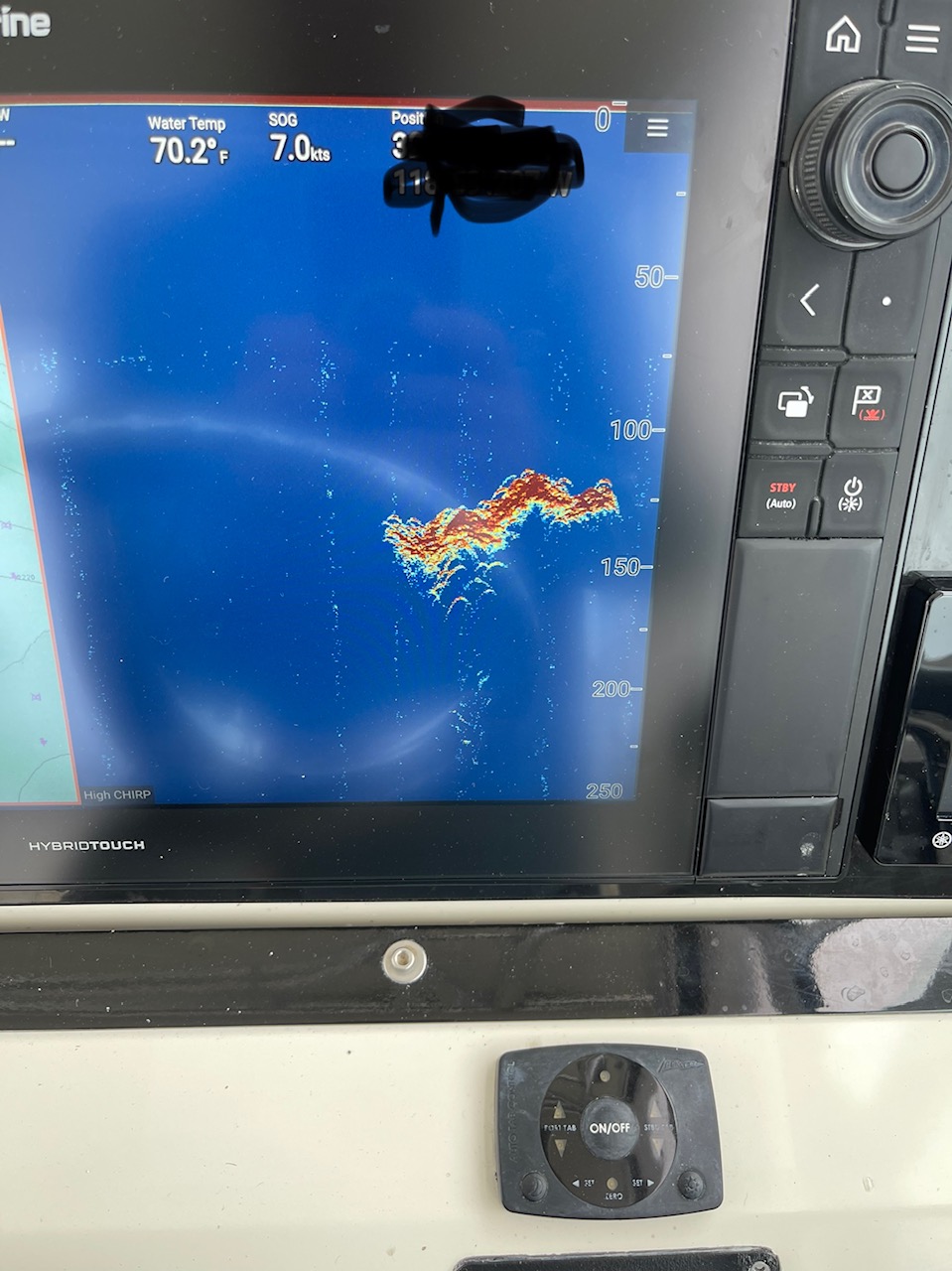 That zone dried up quickly so we worked towards our intended numbers and ran over a few good spots of fish. We ran upswell and sent out the ballon but never marked again. There was still zero wind so we decided to make a big loop around our general zone to see if we could meter the meat vs. the occasiaonl school we were marking..

We didn't see a thing for the next 3 hours.. Where are those damn albacore!

I decided to pick up and run SW of everyone and we finally got a little wind! We pulled the throttles back, immediantly marked a school, deployed the gear and were insto bit 25' feet from the boat. Even though it wasn't the target species it was one of those bites that you neve forget seeing.

This one didn't pull very hard and we had it in the boat in about 20 minutes. 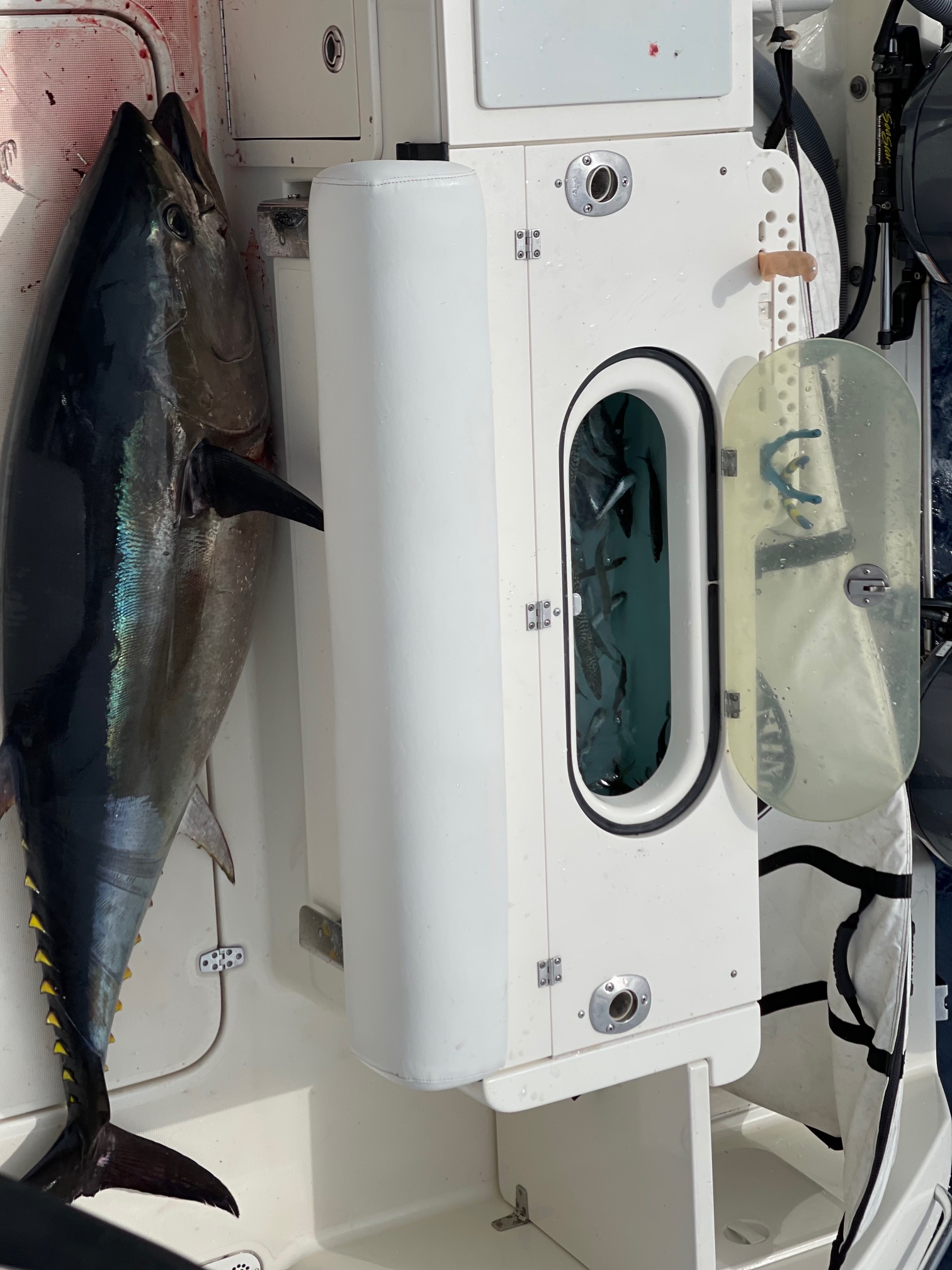 Not the target species but we pressed on.

With the fish in the boat we looked at the meter and it was painted so out goes another prime albacore bait. Once again it gets smashed instantly ... by the wrong damn species.

This one was a demon. We had 30lbs of drag on the fish and it just wouldn't die. An hour and half later we had the fish at color and an hour and fourty fish we sunk 2 gaffs. 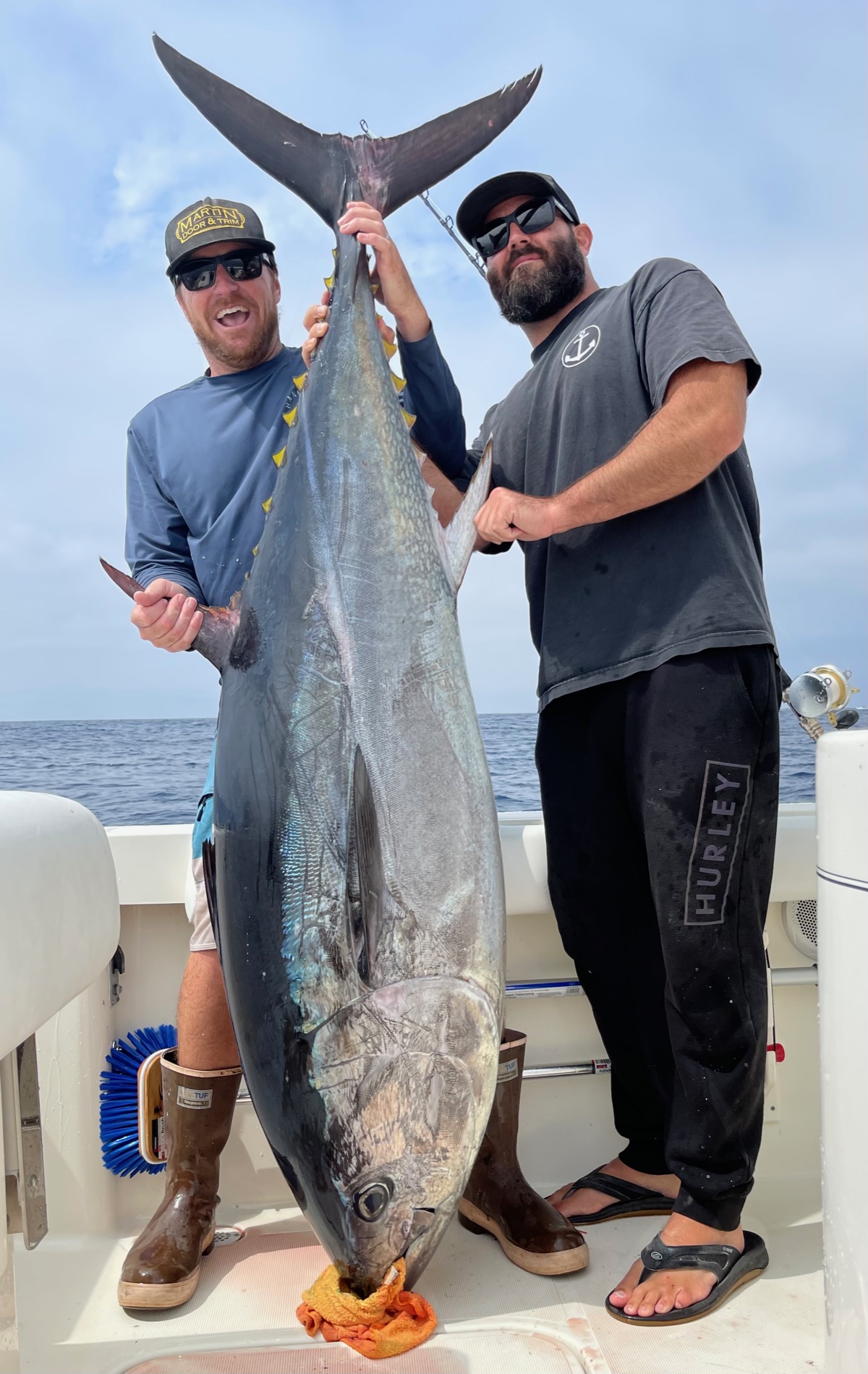 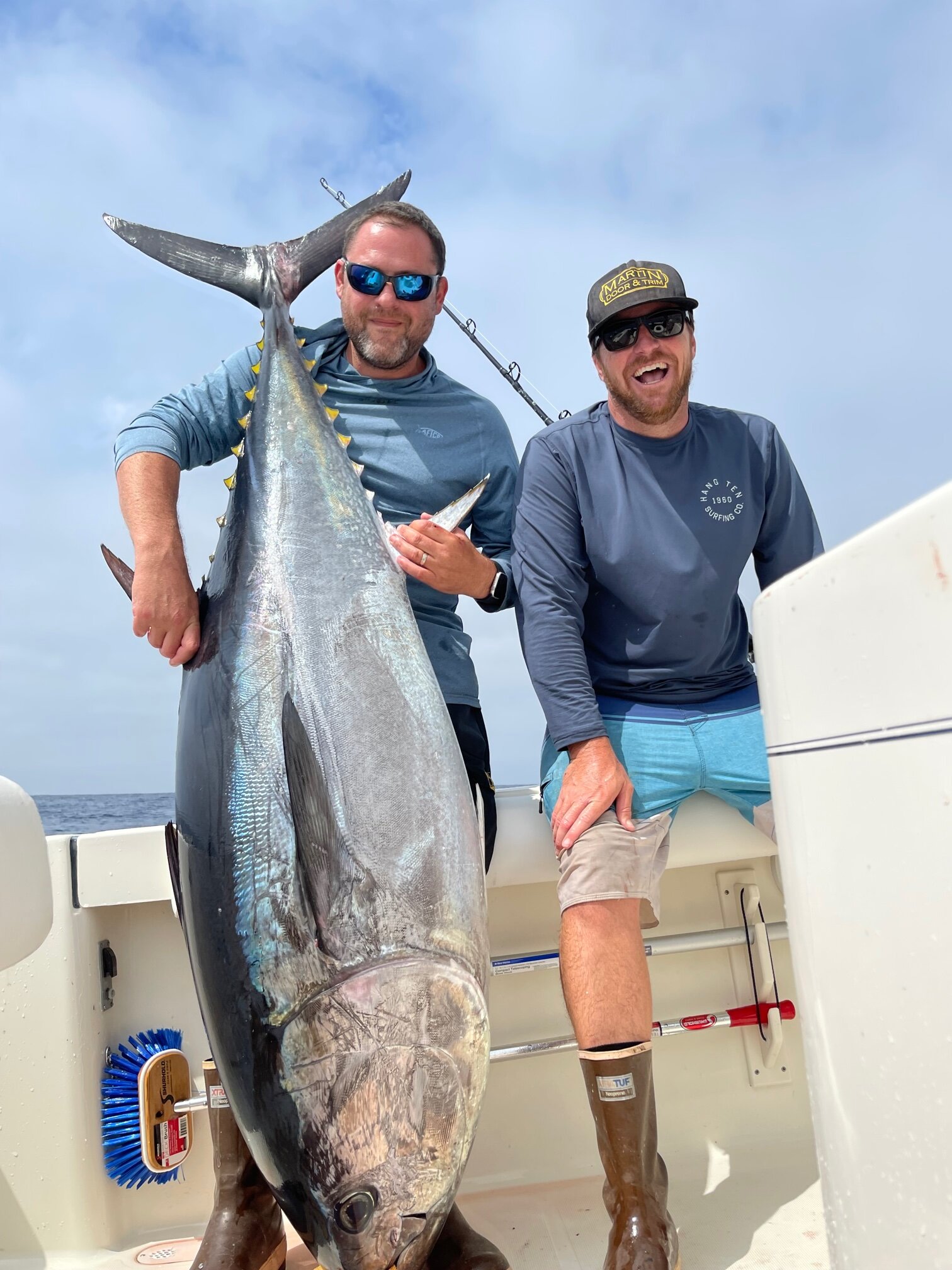 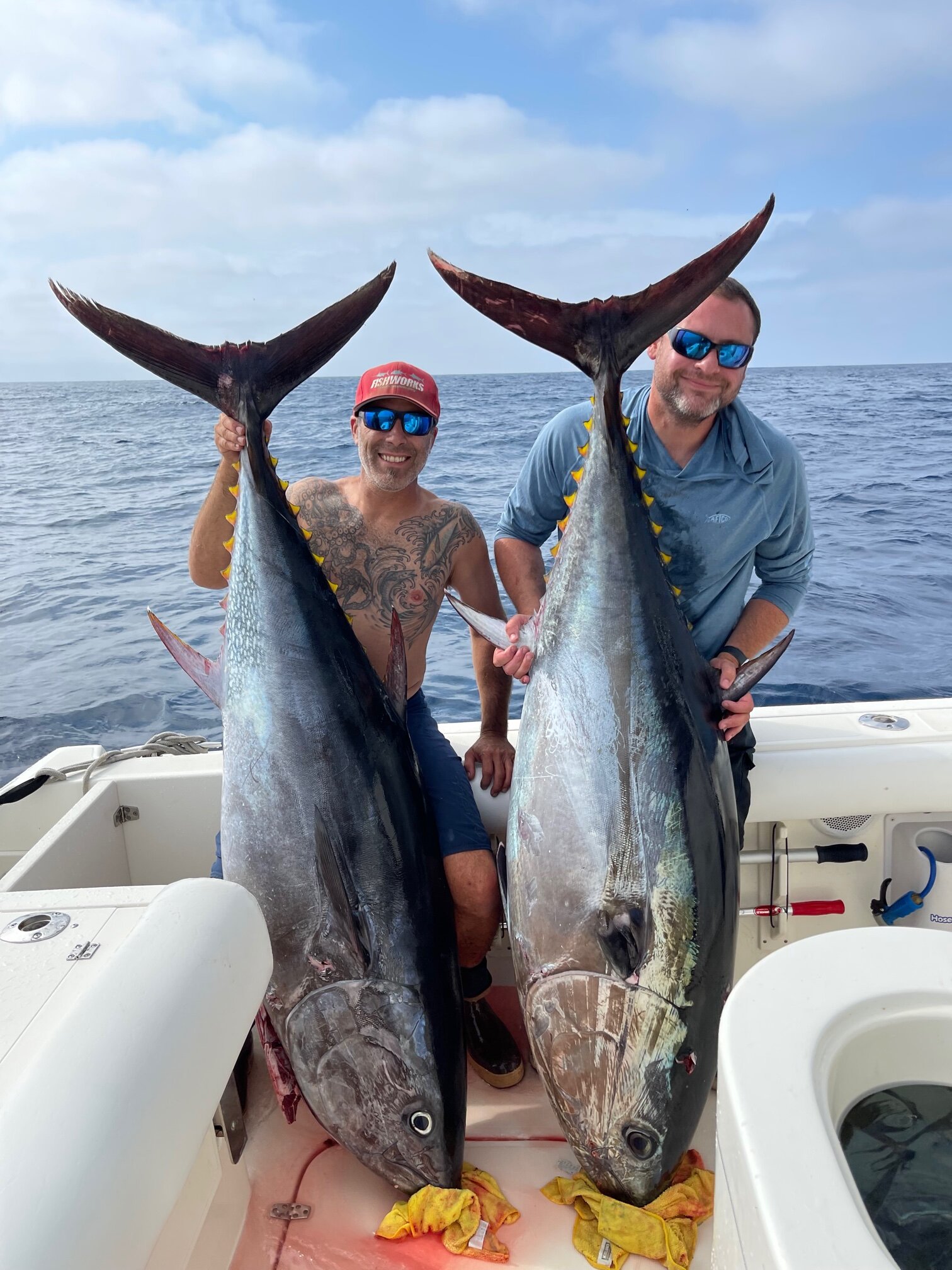 Dejected about our failure and with a long ride home we headed out around 3 PM right after the fish hit the deck.

To add salt to the wounds the ride home was utter helmett. The weather between the islands was shockingly bad.

Sometimes you just need to fill the bag with non target fish to ease the pain of the hunt . Nice going on the junk fish
Reactions: Jeff Hannah, Northeastfshman, coacheric and 7 others
Upvote -1
R

If the Albacore won't come to you, you have to go to the Albacore.
Visiting a friend in Newport Oregon on 9/23.
Toggle signature

Great report/pics/read Brett and NICE FISH guys! If wrong,
those are the RIGHT KIND.

YEAH...trust me, I TOO miss the Albacore 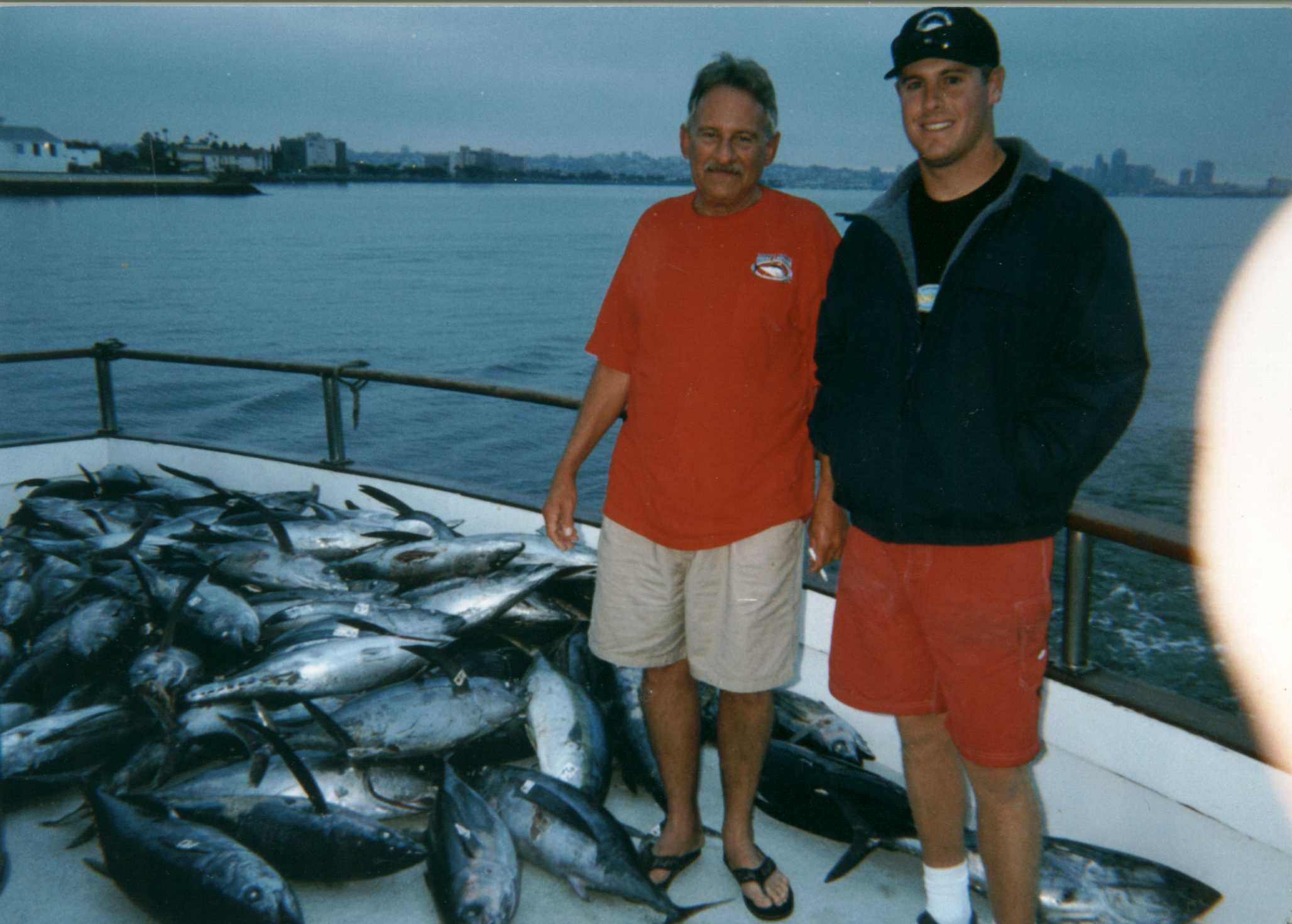 I really wish the albacore would come back.
Reactions: djd35de, John Stidman, Northeastfshman and 1 other person
Upvote 1

I hate it when you cant get through the catfood to get to the longfins..
Toggle signature
Lets Go Brandon!
Reactions: John Stidman, One_Leg and Northeastfshman
Upvote 1
J

You guys are the worst albacore fishermen and the Bluefin freaking hate you. Nice report.
Reactions: John Stidman and Northeastfshman
Upvote 1

Yeah, it really sucks when you can't get through the cow bluefin to find albacore. Also, might be kind of hard getting sharpy off of your plotter screen...lol
Toggle signature
'79 20ft Beachcraft cuddy
Reactions: John Stidman, bricktop27, Northeastfshman and 1 other person
Upvote 1

Damn blues keep getting in the way.
Toggle signature

Quit singing the blues.
Toggle signature
Sometimes I wish i was a bird so I could fly over some people, and shit on their head.
Reactions: John Stidman and Northeastfshman
Upvote 1

Snagged a few longfins on 9/5 out of Westport Wa. 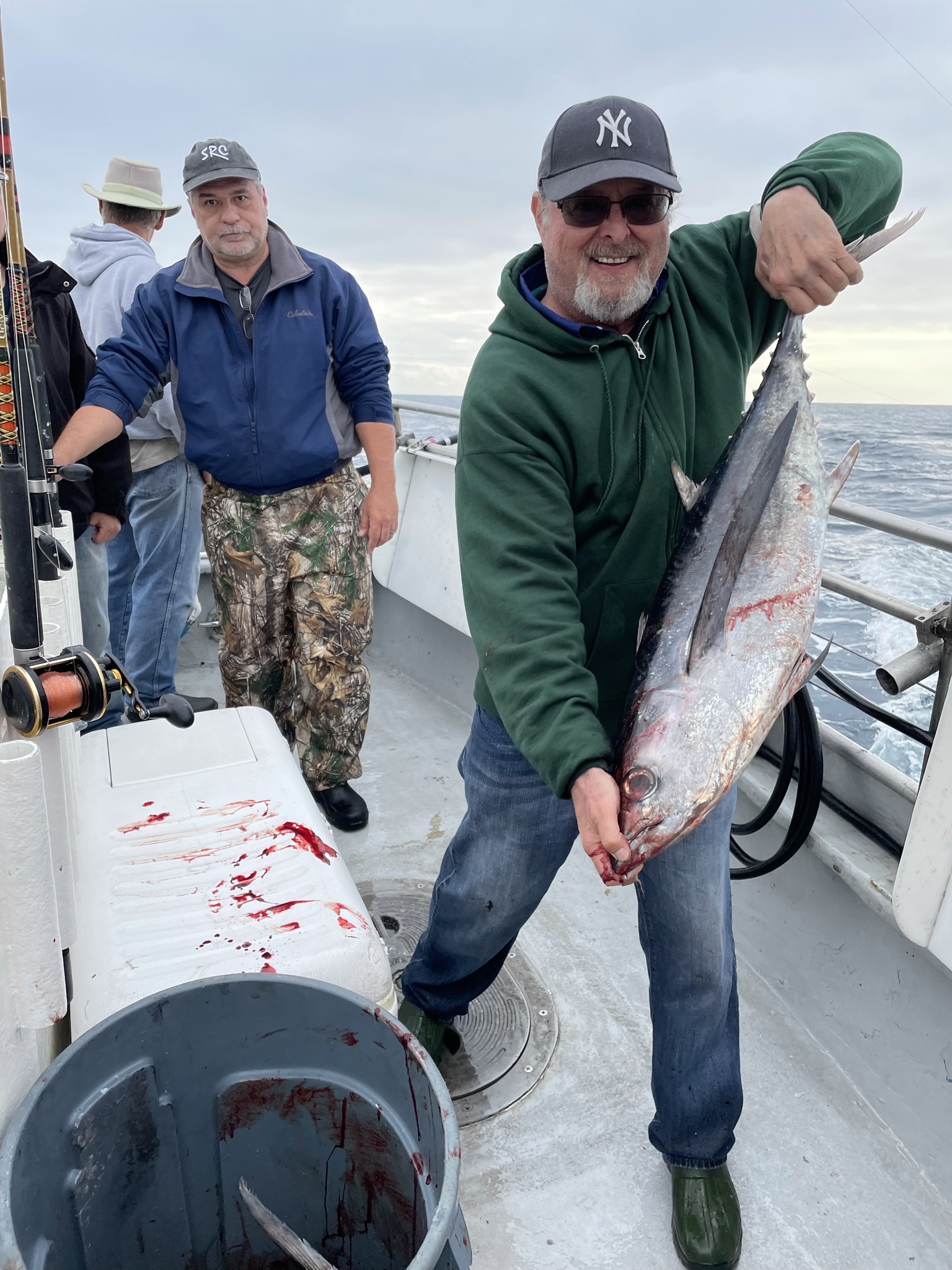 should of went to the CA/OR border and caught the other 999
Reactions: John Stidman
Upvote 1

Albies trending down in washy....they be here a bit next year and solid the year after
Toggle signature
“It is no crime to be ignorant of economics, which is, after all, a specialized discipline and one that most people consider to be a ‘dismal science.’ But it is totally irresponsible to have a loud and vociferous opinion on economic subjects while remaining in this state of ignorance.” — Murray Rothbard
Reactions: John Stidman and Northeastfshman
Upvote 1

Lol. Y'all can definitely have my share of the albis. They have been nothing special to me since I first started catching them when I was in the 8th grade. Yft have always been my favorite tuna to catch.
And yes, I've been on boats that have been absolutely plugged with chickens.
Toggle signature
Reactions: John Stidman, SMYLEE and Northeastfshman
Upvote 2

Wow ya the weather and fishing looks terrible. You should just give me your boat because you guys suck dick at catching albacore. The fishing was so terrible where you were at that you blacked out your numbers on the FF
Last edited: Sep 9, 2021
Reactions: John Stidman and Northeastfshman
Upvote 1

Damn dude, better luck next time. You must have forgotten the zucchini Zukers. I see OJ too man, and he looks scared
Reactions: John Stidman and Northeastfshman
Upvote 1

wow, you guys really suck bad for not getting the albies. pathethic!
Reactions: John Stidman and Northeastfshman
Upvote 1
Show hidden low quality content
You must log in or register to reply here.

Offshore Tuna's and Oil and Lightning Oh My...