when i first started doing reel seminars 5 years ago, one fourth of the reels brought in were ambassaduers. initially, they took up a third of the time. it took quite a while, but i figured out the right combination of penn ht-100 drag washers and metal washers. my problem was always a space issue. the penn washers i had were always too thick. recently, dawn at SMOoOTH DRAG *** Can Stop Anything *** came out with a line of carbontex drag washers that fit perfectly. just slap on a coat of cal or shimano drag grease, switch out the drags and witness the miracle!

many of you have these old ambassaduers. it had been a love/hate relationship. good looks and cheap, but unreliable. well, i want all of you to pull out those old seized up ambassaduers, and get ready to fall in love all over again. this is one reel that anyone can fix at home. here's how....

first, check out the smoothdrag website at SMOoOTH DRAG *** Can Stop Anything *** and check out the carbontex drag washers. DO NOT get the old green or black smoothies. then call the smoothdrag lady. her name is dawn and her phone number is (760) 949-0271. order up a set of drag washers and some of cal's drag washer grease. she is absolutely one of the nicest people in the world. and tell her alan said hi!

start with the left side plate. back off one screw (key #199) ONLY. squirt a small amount of grease into the screw hole and put the screw back!!!! do not remove the side plate. remove the next two screws, one at a time, and grease them as well. remove the right side plate assembly (note that this photo shows the cast control knob still in place. it must be removed first). separate the reel as shown below. if you have a dog, note the proper position of the dog now, and make sure it is reassembled in the same way.

remove the right side plate cover (key #24511). note that the anti-reverse roller bearing sleeve and the two cupped pressure washers (key #5131) stayed with the side plate cover. separate the drag/gear cluster as shown. note left to right, the .... replace the right side plate bridge screws (key # 13369) and install the cupped pressure washers in a "()" orientation as shown below. find the small white plastic brakes on the spool (key #20211) and press them in. failure to do this and the right side plate assembly may not seat properly. install the star and spring. grease and install the handle. install the handle nut and c-clip pat yourself on the back and have a beer. well done!
Expand signature
eddie's brother, grady white 258

Excellent description! You really make it seem so easy!

I have a ten year old ABU Garcia Ambassadeur Ten (http://www.realsreels.com/reels/ambassadeur/TEN.htm; a cheaper model of the Ambassadeur 10000) where the drag is not performing all that well.

I tried to find Carbontex for that reel in the links you provided, but it seems they don't provide any for this series. Does anyone know of any carbon/graphite alternatives for these larger ABU reels?

i found this photo on ebay 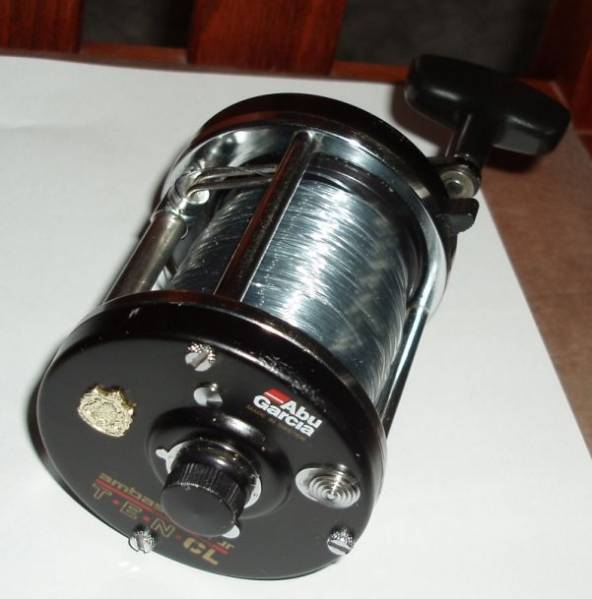 and the schematics on Southwestern Parts & Service-Your Source for Fishing Reel Repair, Parts, and Service! ambassaduer is now using carbon fiber in at least one of their new reels, the record. if you contact them, they might have carbon fiber washers for this one as well. the only other option would be to measure up the drag washer and maybe i can find a match. i'll need the id x od x ht in millimeters. it might be possible to find a match, or even hand cut something to match. alan
Expand signature
eddie's brother, grady white 258

Thanks for your tip. (That Ebay picture, btw, shows the slightly more expensive model with a level wind.)

I called the ABU headquarters in Sweden where they used to make all Ambassadeur reels including the T.E.N. series. They guy I talked with just said 'we don't have any carbon fiber washers for that reel'. He was in a hurry so I didn't have any details if the drags of the current 'Big Game' series could be used.

Before I do anything further, will there be jumping springs all over if I just open one of these up?! Brrrr...

Excellent description!!! Maybe you could help me with a (Probably simple to you) problem that I have with my 5500. The line guide keeps getting stuck on one side of the real (the left if I remember correctly), the gearing in the guide doesn't look like it is mared or have has any other problems, but it does look like it needs greese.

Could it jus need greese, or do you have any ideas on other problems. I like to fix things myself, rather then send it in, which may cost more than the real is worth.

that one's easy, the pawl is not pressing hard enough against the worm. remove the pawl cover and put a small washer inside. in this photo, you see the frame and line guide. the line guide rides back and forth on the worm. there is a small forked "pawl" the forks of this pawl ride inside the grooves of the worm. there is a cap the holds the pawl in place. get a small "dot" of plastic, place it inside the cap and it will force the pawl against the worm and the pawl will track correctly. clear as mud, huh! let me know how it works. alan

I wanted to comment on one aspect of this tutorial. I used Corrosion X on the bearings, as I do with my larger Penns, and found that I can't control the Abus while casting. I'm not an expert with conventionals by any means, but I'm going to switch to oil for these little guys so I'm not picking at them when I'm supposed to be fishing. No problems with corrosion, of course!
Expand signature
Let's light a match to these dynamite dreams!
-The Explosion, No Revolution

you're not the only one that's made that comment. seems that it might spin a little to much. hard to change your technique when you've become accustom to a slower reel after so many years.
Expand signature
eddie's brother, grady white 258

Awesome tutorial. Thanks. Mine was working great untill this day a few years ago:

Now the drag is a little, uh, less than smooth. An hour fighting a 170 lb Tarpon will do that.
I think I should treat it to some new drag washers.....at least.
Expand signature
Yes, it's fast
No, you can't drive it

damn i should send you my abu since I'm far too stupid to do it myself!
J

Hi Alan
I notice that these reels rely entirely on a one way roller bearing for their anti reverse function. Do you know at what poundage will this bearing start backing up?

word-doctor said:
I wanted to comment on one aspect of this tutorial. I used Corrosion X on the bearings, as I do with my larger Penns, and found that I can't control the Abus while casting. I'm not an expert with conventionals by any means, but I'm going to switch to oil for these little guys so I'm not picking at them when I'm supposed to be fishing. No problems with corrosion, of course!
Click to expand...

danggg.. same thing happened to me this last weekend with a 6500c3 too fast little thing, but I dont want to go back to use a thicker oil, it will be under control training in the park.

who much drag # are now you getting with the carbon fiber drag washers?

Do you add all 4 of the new drag washers or only replace the old 3?

wow i'm really glad this came back to life, never would have found it. I have a few of these old reels, might bring them up to par as spairs.

Thanks you are the man as always
Expand signature
http://www.bdoutdoors.com/forums/personal-news/390614-official-bd-beer-geeks-thread.html