Run all day in sloppy though improving weather we arrived to the Rocks around 2130, made bait pretty quick, and quickly got to work on jumbo grade yellowtail in the 30-45 # class, with 172 of these slugs resting comfortably in the RSW when the smoke cleared. True to form, Ed even got one on a jig….glow-back Tady 4/0. His other move of the day was gaffing one of his own fish…get em Ed! Not sure who is winning....Ed won! Another nice one for Ed! This is one Ed landed in the bow and gaffed himself Ans sometimes you have to pay the taxman! Bruce with a good one! One of a bunch that Brett nailed. Lou with a nice one...hey can you hold that up so it looks bigger! Team work...Mike gaffing Ed's fish. So the secret was there were only 4 people fishing the bow. Quietly catch a fish...if no crewmember around, stealth gaff, and drag it down the off side and deposit for tagging...rinse repeat...while everyone else fought the tangles... One of our trip traditions is a photo of the two of us with a same species fish pic. After calling it a night at 0200, we reviewed the pics, and realized the shot was blurry…figured we'd grab a couple out of the kill box for a reenactment…only problem was there was only 1 in the box…easy fix…pin a mak on and drop it…instant bite…problem solved!

And on the way out, we had time for dinner…Rack of Lamb and mixed vegetables. Grabbed a couple hour nap…glad I did! Signing off.

November 8 Spent the day looking for wahoo, the boat ended up with 6 wahoo, mostly on the troll. Checked out the shallows, fishing Megabaits for Cabrilla. Ed with a Cabrilla 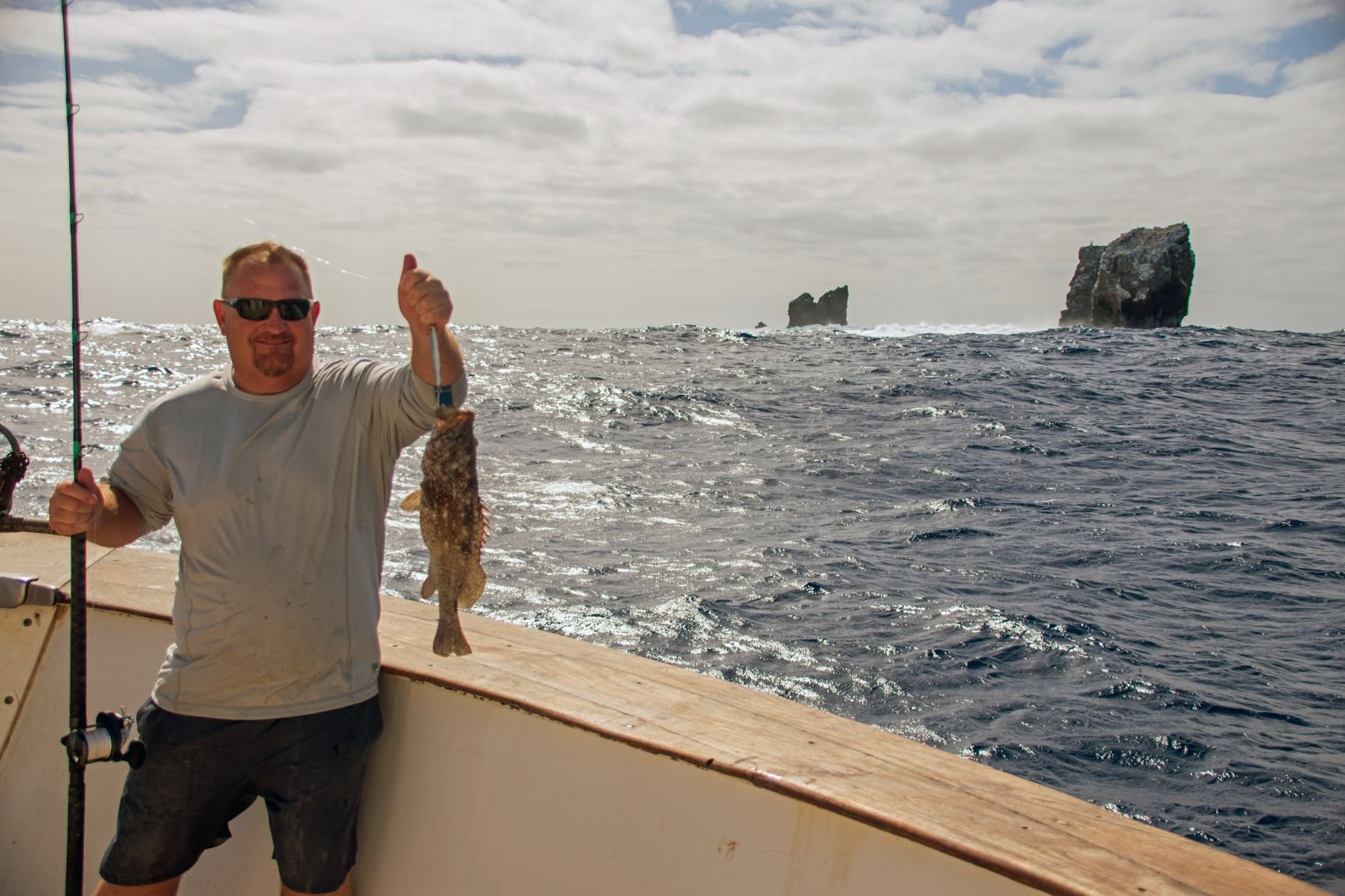 Mike got in the fun with the Cabrilla too!

A final late afternoon anchor job at last nights spot, resulted in adding a few more jumbo yellowtail for those that wanted more, as well as a couple marlin and a shortbilled spearfish all released. Deckhand Anthony pulling on one of the several billfish hooked and released, while Deckhand Trevon put the wood to another yellow...by this time most passengers were in "spectator" mode! Ed, Mike, Bruce and I opted for a leisurely tackle breakdown through much of the day, though through jigs and bombs with hopes of one last wahoo. Though the day was a blur with no sleep, we did manage to eat…Breakfast. Eggs, chorizo, potatoes and tortilla; Lunch Big bacon cheeseburgers, and potato wedges, and for Dinner Yellowtail, rice, and mixed vegetables. Running up and in through the night with surprisingly good weather, got a solid 9 hours of much need sleep.

November 9 Nothing much to report…a travel day, weather continues to be good, though overcast and cool. High point of the day is breakfast, lunch, and dinner all between naps! Somehow missed what we had for breakfast and lunch, though had a really good pork chop, mashed potatoes, and mixed vegetables for dinner.

November 10 - Continued good traveling weather put us in position to fish a few hours below and above Colenett to break up a travel day, with one 30# white seabass caught, and not much else. Spent the remainder of the day running up in good weather, eating and napping. Lunch was ceviche tostadas and dinner was a nice chicken vegetable soup, prime rib, and mixed vegetables.

November 11 End of Trip Offload - We made good time going up the line throughout the night, arriving in the bay around 0100 where we spent the night on the anchor, and at the dock at 0530. The normal offload activities were complete, fish picked up directly by the crew at Fisherman’s Processing for those choosing that service option, with the remainder of the catch going topside for traditional sorting and jackpot weigh in. Ed and I are drawn to another visit to the tackle shop at Fisherman's Landing...both leaving with a sweet Calstar 800XXH blank that will pull duty as a heavy bait stick as well as adding depth in the wahoo bomb/jig lineup. Hopefully we'll test on the Lupe YFT and Ridge/Rocks wahoo next year, as they were not part of the equation this trip. Thank God we travel light...OK maybe not so much! With most of the fish being processed by Fisherman's Processing, much of the fish goes from hold to slush bins on the dock, though some goes up for sorting at the top.

With our gear loaded in Ed's vehicle, goodbyes are said, we go to breakfast with Bruce and Mike, Ed drops me off at the airport and then he is off to Fisherman's Processing as he gets same-day processing. My fish are at Fisherman’s Processing and will be at the house sometime next week. Love the report John. The sad part of any trip is when you break down the gear. Roy could use a haircut, there is a lot of knowledge in that brain. Gotta keep it cool.
Toggle signature
Fair Winds and Following Seas,,,
Reactions: Tom123
Upvote 0

Thanks for writing such a comprehensive report!
Reactions: NaplesJohn
Upvote 0

Peg North said:
Thanks for writing such a comprehensive report!
Click to expand...

Thanks for the write up. Roy's head must be even hotter now, poor crew

Traven will be a super star. Epic mossback bite.

Those are marbled grouper. In Mexico many fish are called Cabrilla
Last edited: Nov 27, 2020
Toggle signature
Holi-e-Mackeral is a kook
Upvote 0
Show hidden low quality content
You must log in or register to reply here.