So for the last eight months, COVID and politics has seemed to dominate everything, even on Bloody Decks. Many of us had trip plans changed, trips cancelled, personal decisions causing us to cancel ourselves…Ed and I had a trip to Cedros cancel, though we had already decided it was a no go for us. Our long-awaited trip on the RP with Bruce, Mike and Brett appeared to be a go as the landings developed their plans with SD County to allow the season to go forward. Unfortunately, Guadalupe was off the table, but we hoped that we would get our shot at the ongoing BFT bite, hopefully on the backend of the trip…spoiler, no tales of cows and supers…though they got their shot on the trip before ours, the weather ultimately put a stop to us finishing up on the local grounds. 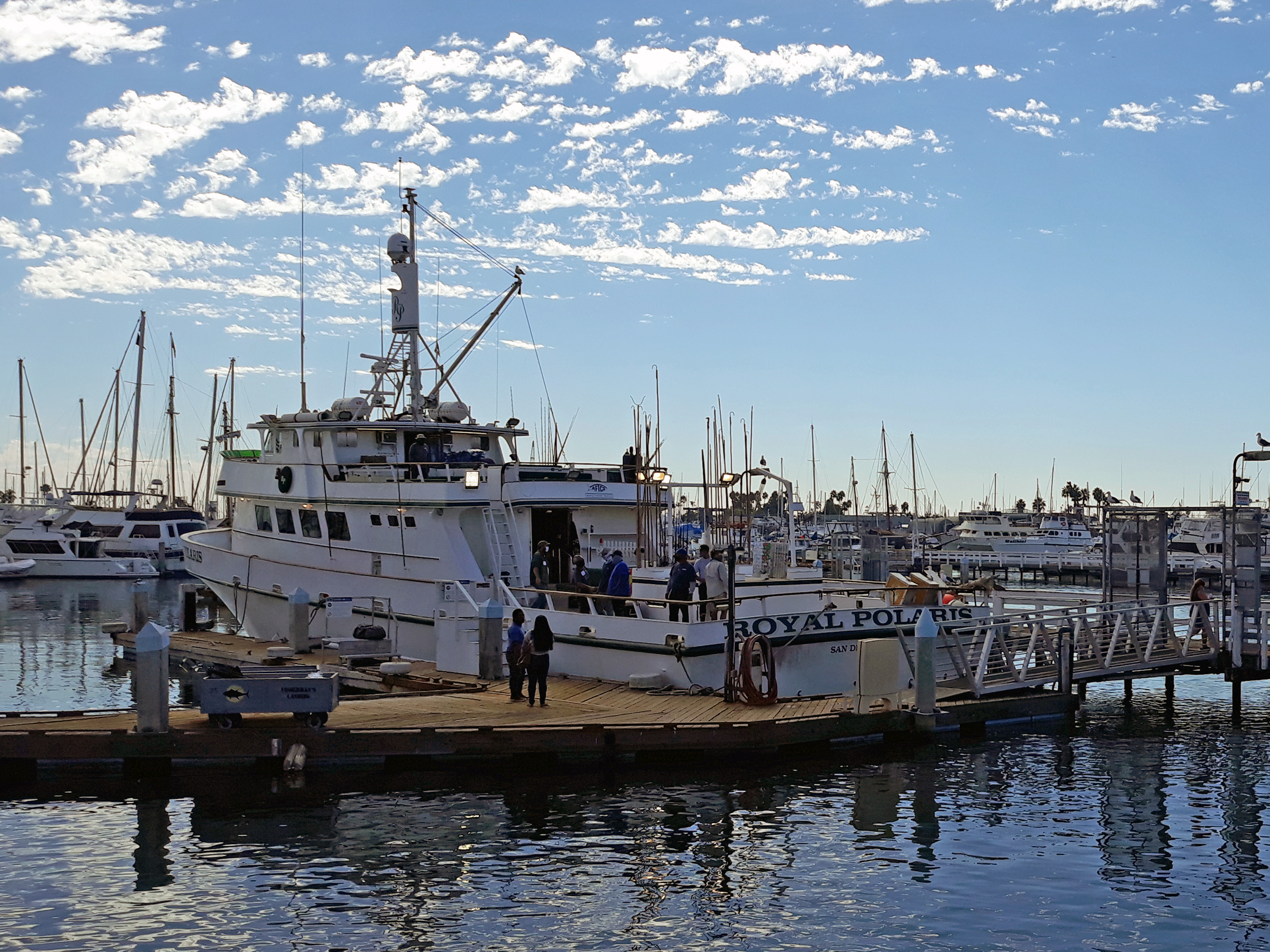 Cliff Notes Version – Made it back on the Royal Polaris after a two year absence, our first trip on the RP was a June Hi's Tackle trip in 2017, as a change of venue following several trips on the Intrepid and the Excel, and a scheduling issue that necessitated a shorter and earlier trip. We had a good time, and knew we'd be back. In 2018 we rode our “normal" Phenix Rods 10 dayer, and for various reasons decided to try a new ride in 2019, choosing the Independence, had a fun trip, great food, and fully engaged crew, and played with the taxman at Guadalupe. Only downside was three person staterooms, and opted out of a return trip in 2020. One “rule" is bigger is better, leaving out the American Angler, Royal Star, Vagabond, Searcher, Polaris Supreme and so far the Rooster in the selection process. In sloppy weather at the Rocks we watched the size matters factor with the Excel and the Supreme in a side by side comparison…enough said. So decided a later trip might improve our prospects at the Lupe both on eager tuna and less eager GWS's, and locked in the RP for the 2020 adventure. Definitely some strangeness associated with COVID from flying out from Texas, and the various protocols that had been implemented…biggest “social" impact was mealtime seating, that eliminated much of the fun social interaction around the table. The good news is we made it through the trip without an outbreak of the plague!

Seems like we fished everyday except departure day, as Roy opted to save the Bluefin for the backend of the trip. Day one and two we fished the beach, with pretty good yellows, and bass especially on day one, slower on day two. We busted a move to San Pablo, scratched a handful of yellowtail, but were run out of town by voracious schools of big bonita and barracuda…not what we were looking for! Initially left for the Rocks, though ended up heading down to the Ridge where we spent a couple days on the stock Ridge grade yellowfin, mostly 10-15#, with some standouts in the mid-twenties, along with one boomer stop on a kelp for “all you want" mahi as we worked our way down. Also made a few drifts for grouper, putting a few on the boat. Then it was time for a trip to Alijos, arrived around 2130, make bait real quick, and switch from bait rigs to heavy dropper loop gear…when the smoke cleared around 0230 there were 172 homeguard yellowtail from 30 to 45 pounds cooling in the RSW! Was very happy with a new Mak 16 paired with a Calstar 770XH and 100# braid and 100# topshot. Spent the morning hunting for wahoo, putting a few aboard, and finished up in the shallows playing with Cabrilla, before starting towards the beach above Cedros where we worked our way up to Collenett before calling it a trip and a planned offload at 0530 on the 11th.

The Rest of the Story -

October 30 COVID Travel Day to San Diego - Well the adventure has begun, beat the alarm by 45 minutes, leaving the house with a mental checklist running…everything I've ever forgotten accounted for. Reel bag check, Passport check…quick flight from Corpus Christi to Houston, grab a bite to eat at a lightly populated terminal….strange feeling. Head for my gate, happy with a first class upgrade, and as I head down the jetway….oh shit…reel bag! Mental inventory sends me back out, and after a brief moment of despair…there sits my bag. Hustle back to the gate, and get boarded…hope this isn’t an omen. 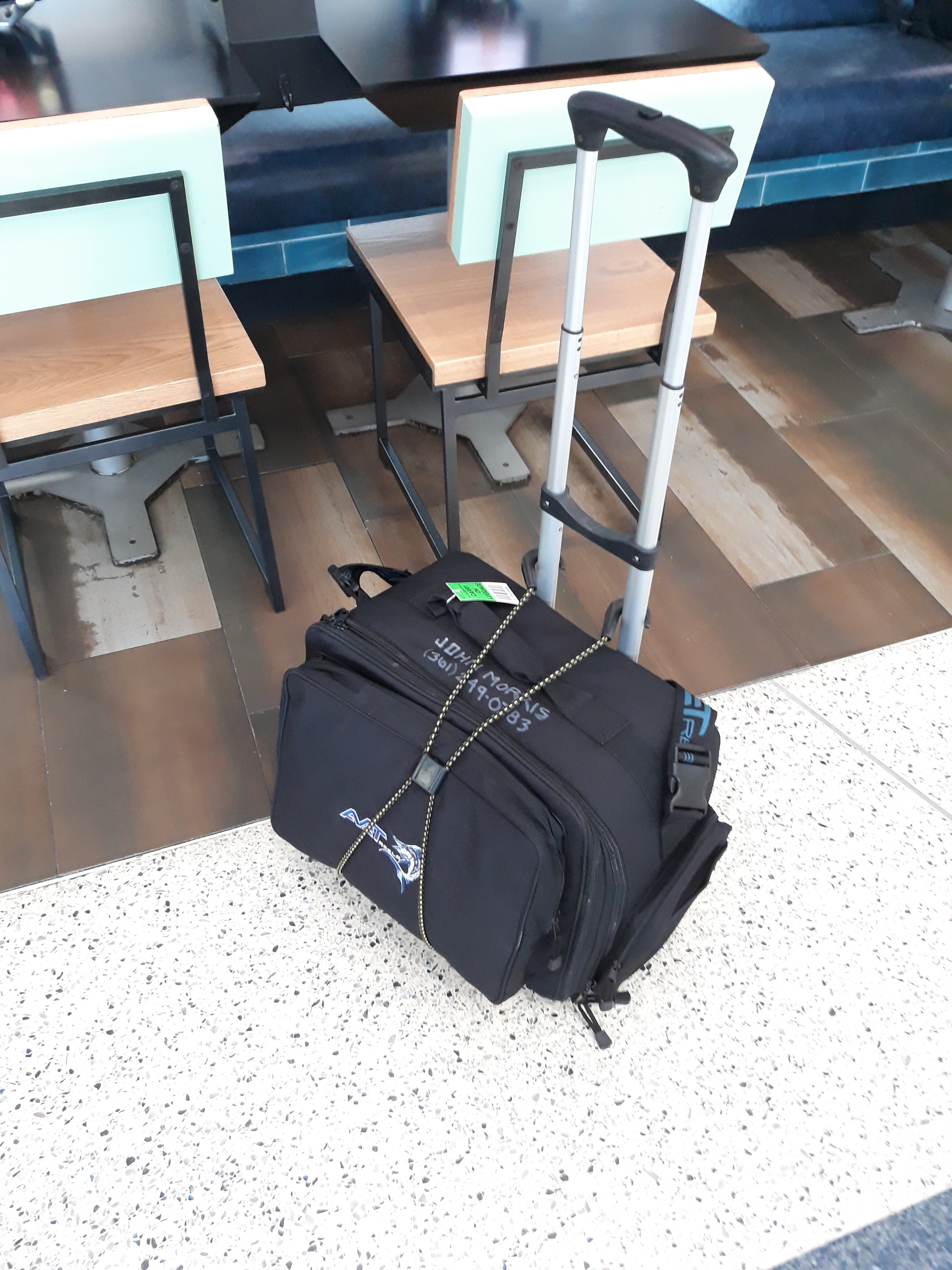 Wow...glad this didn't disappear or become a TSA crime scene!

So when you write your report in real time things happen…sitting back ready to close the doors and the Captain steps out of the cockpit and announces our plane is badly broke…and we will have to deplane and wait for a new ride. Two hours later and two ETD updates, a plane is being readied…we shall see. It seems that all is well as we get off the ground a couple hours late, looks like the normal quick lunch at Mitch's may be pushed off….with an early dinner in order…we shall see. 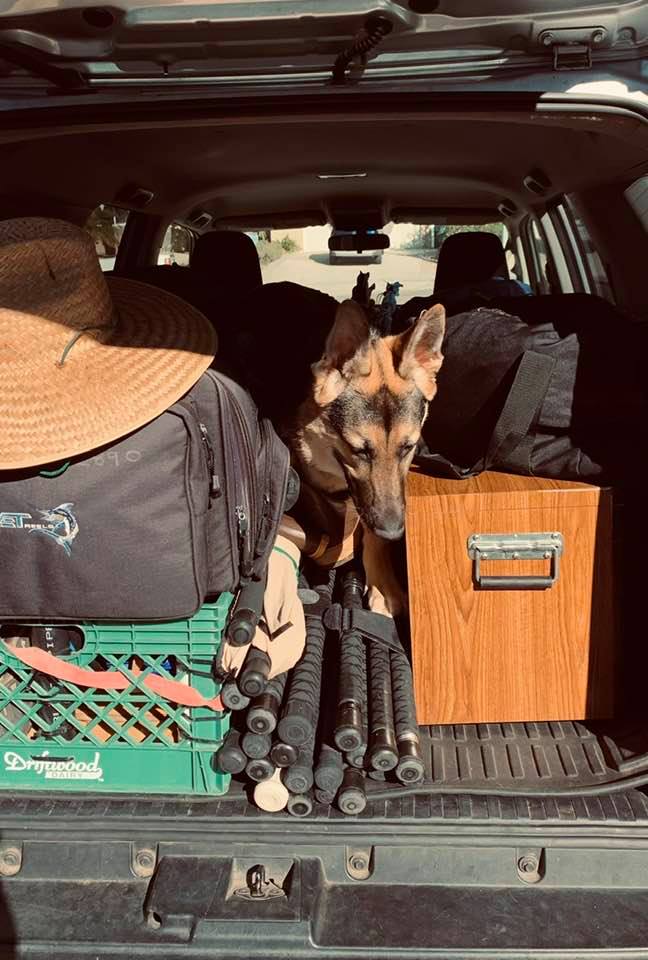 Ed had help from his pup loading the gear at his house in Ventura.

We finally reboard and arrive in San Diego a couple hours late, call Ed and he's stuck in traffic, so Plan B has me grabbing a cab for the 5 minute ride to the Ramada which has replaced our luxury digs at the “iconic" now demolished Dolphin. Checking in at the hotel, Mike had arrived on time and was also checking in. He and I wandered over to Mitch's Seafood and grabbed fish tacos to hold us over until we made the obligatory run to Squidco and dinner at Volare with Ed a bit later. With Ed’s arrival we made our way over to Fisherman's Landing and picked up some flatfalls and other bluefin centric supplies before the Squidco and Volare run ending a successful pre trip Day One. Convenient that Volare and Squidco share a parking lot... October 31 San Diego Pre Trip – With Bruce and Brett scheduled to arrive later in the day, Ed, Mike and I made the early morning wander to the docks to check out a few offloads, with the highlight being a significant number of big bluefin that are being caught on the Tanner. With that done, it was time to again eat, going with Mitch's for breakfast. After breakfast made a trip to M&M and had X-wrap put on over the hypalon grips on 5 new rods that I'd had built, and inadvertently neglected to specify the X wrap finish. A bit later the siren song of a new Mak 16 called, so a trip to Fisherman's Landing fulfilled that urgent call, spooled with 100# solid specta and boat length of 80 mono topshot it goes on my Calstar 770XH that previously was paired with a Avet HX Raptor. The HX is now better paired on a new Calstar 875XH that was envisioned as a tuna killer for Guadalupe before the COVID induced closure. Normal in-room pre-trip chaos...can't use what you don't bring! Ed and I spent some time rigging flatfalls, and organizing gear before meeting up with Bruce and Mike to again eat…this time at Point Loma Seafood for lunch. More rigging and reorganizing, and you guessed it, time to eat again…now dinner at Pizza Nouvo with the gang plus Lou the Hi's Tackle charter master.

November 1 Departure Day – So the adventure begins extra early with the time change…awake early as always on departure day, and then factor in the time change…its OMG early. An early breakfast at Denny’s, another of the annual traditions followed by watching the RP offload and depart for the fuel dock. We grab a couple dock carts for 5 people’s gear for 10 days, clear out the rooms and we are ready to go! Carts unloaded dockside we await check in with the new COVID procedures. Easy onload with the Redshirts getting the gear to the boat and quickly put aboard, though somehow I managed to not get my 50% payment in early…paying for it with the last boarding number…#26. The Gang's all here Me, Mike, Brett, Bruce and Ed...ready for 10 days doing what we al love!

Off to the receivers and put a load of bait aboard. Watching Roy meticulously selecting and rejecting multiple boxes of bait...looking for the prime stuff...great bait was the result! Ed and I had talked about how the trip would start, would we go immediately to the Tanner for bluefin, or points south…personally I had hoped we'd run south, and finish up on the bluefin on the backend of the trip…imagining BFT sloshing around for 10 days in the RSW or caught in the last 2 days of the trip…Roy announces that we'd run down the beach, and fish an area that offered epic calico bass and yellowtail on the previous trip in the morning. Ed and I are jazzed as our early summer Cedros trip had been COVID cancelled, so the chance to fish the bass is a great bonus!

Lou held the swag giveaway and raffle, with everything from a Rainshadow rod won by Brett, a Daiwa reel, Yozuri Bonita trollers, Fisherman's Processing gift certificates, flatfalls and flouro combos, poppers, and DTX 220 trolling lures up for grabs…big thanks to Lou and Hi's Tackle in South San Francisco! 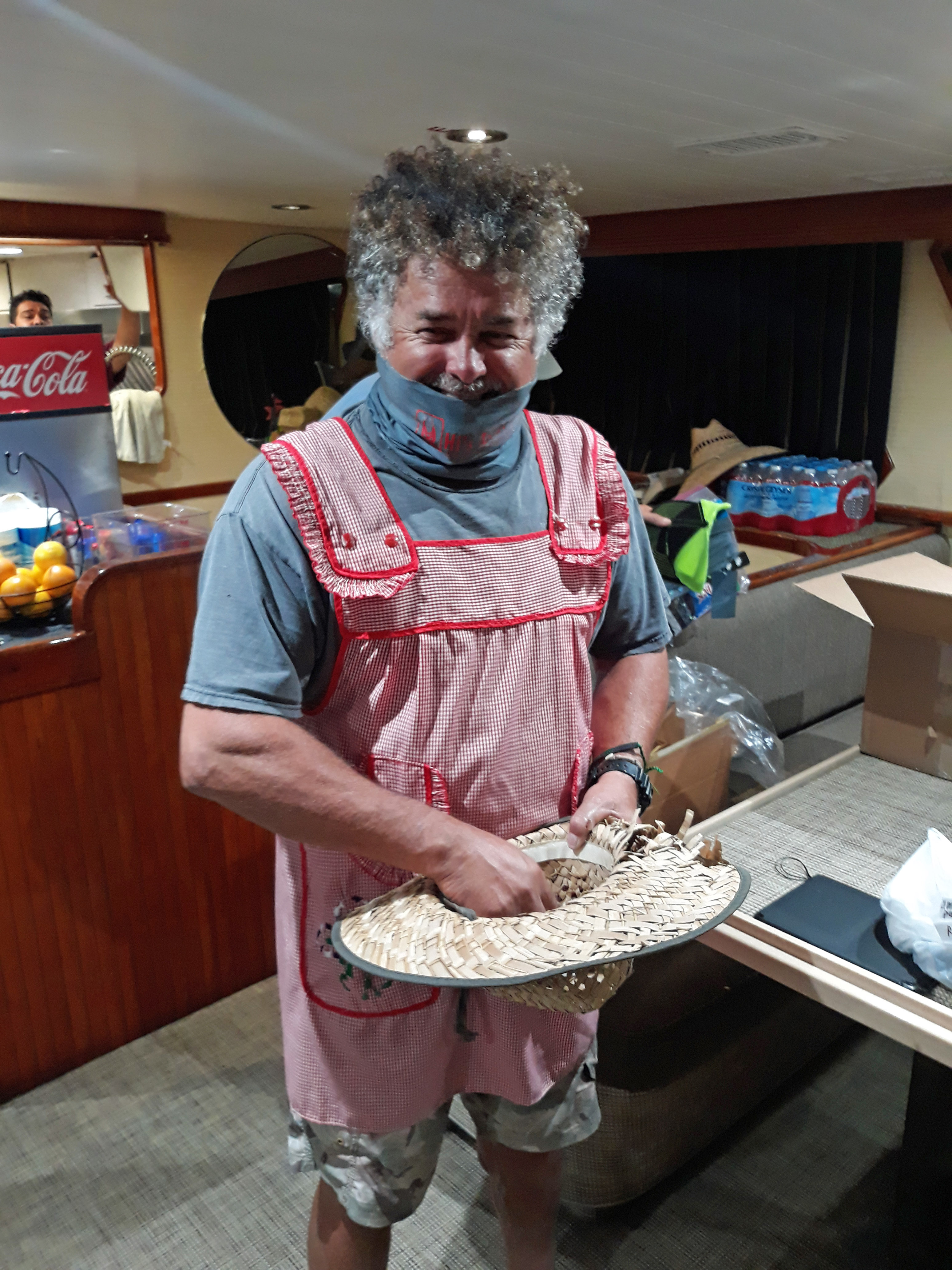 Capt. Roy dressed for the raffle! Brett was the big winner with a new custom wrapped Rainshadow

Traveled down all night in calm conditions. We will pick up on November 2....Catching Bass and yellows on the beach!
Reactions: fishin_kid, Eric Ancog, thefishcatcher and 11 others
Upvote 0

Love the “Episode” approach. Your reporting is always anticipated and appreciated with the comprehensive photos and writing that rivals the outdoor print journalists. Bravo.
Reactions: NaplesJohn and Tom123
Upvote 0
T

Glad to hear ya didn't lose your reels, had a great time and made it back safely.
Reactions: NaplesJohn
Upvote 0
Show hidden low quality content
You must log in or register to reply here.