November 6 – Woke up this morning to biting “Ridge Grade" tuna…Having to cull through the skippies and mini-yft to get a few to tag, but a fun morning yanking and cranking. High point was a flurry of every cast of an OTI popper resulting in a blowup or a fish. Snuck in a break for breakfast…bacon, eggs, and toast. 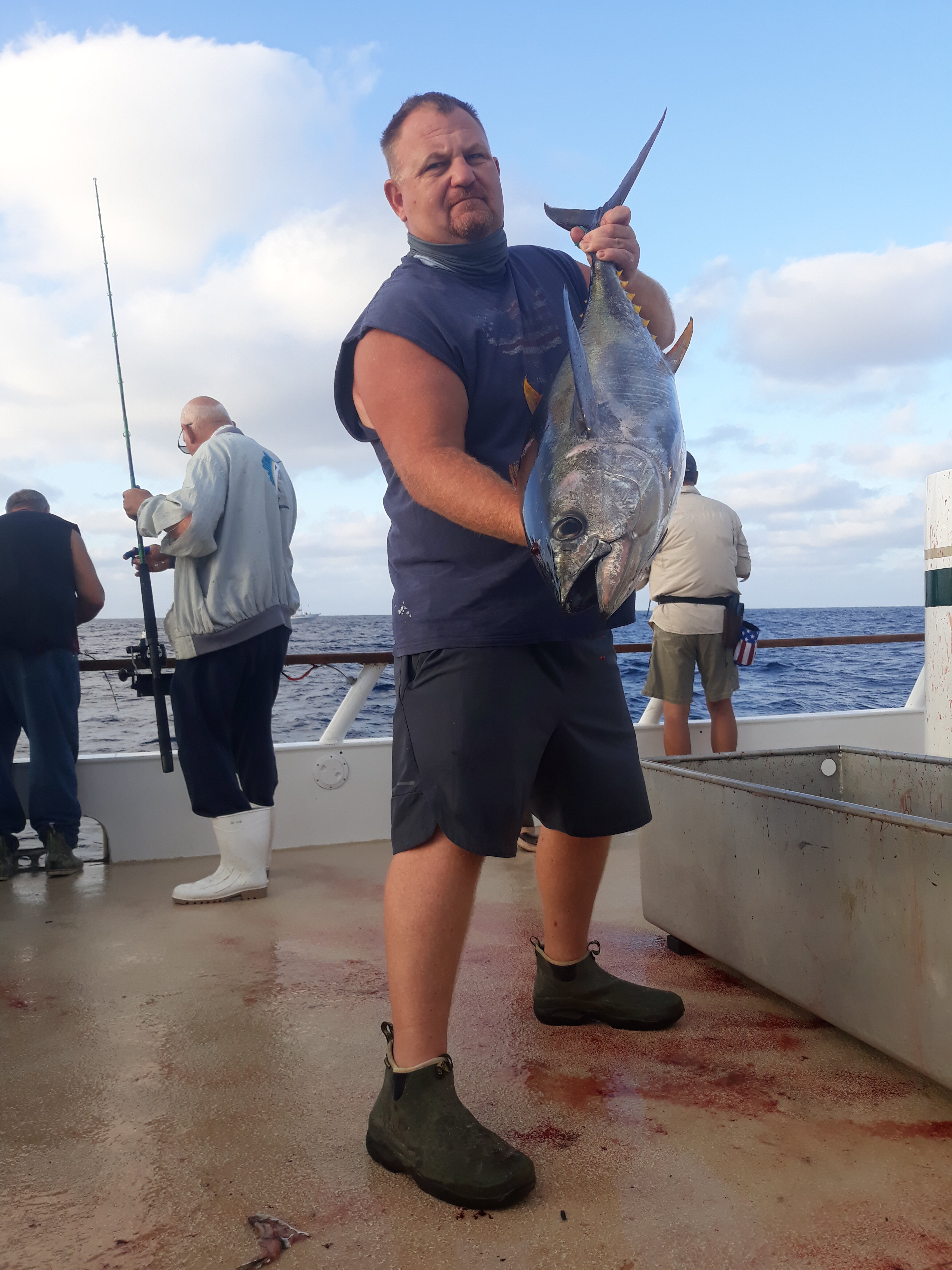 Mike with a quote of the day from Ryan…“That's a better grade"…”No, same grade…just a fat kid in the class.” 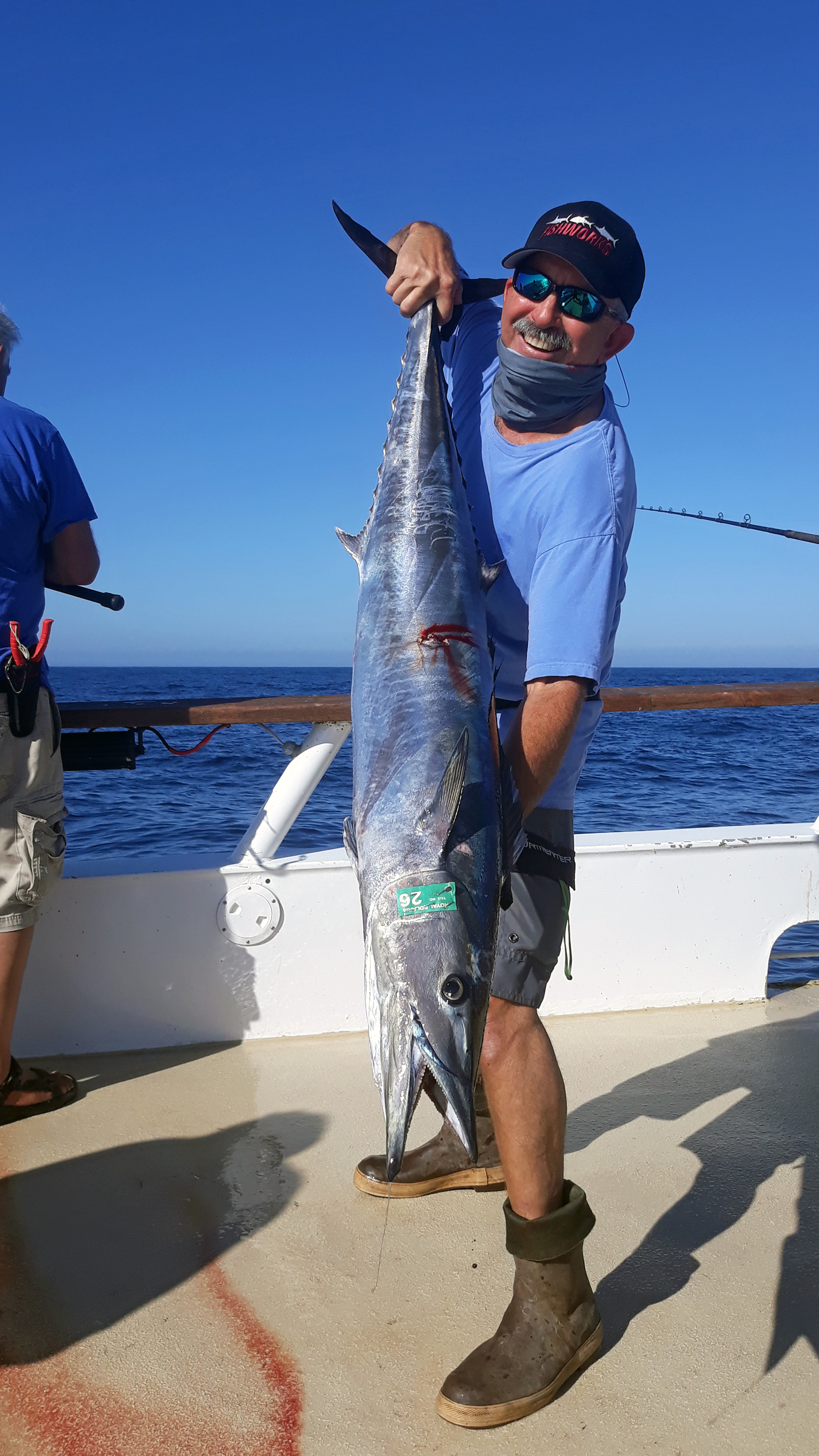 Somewhere along the line I managed a 40# wahoo on a Tony the Tiger 6XJR…ate it close to the boat…almost a quick fish…ended up in the bow with a squirrelly fish making it to the gaff.

Team 2 finally stopped the boat with a double, and Brett gone one...thinking on the bomb. Ed and I were on Team 3 and spent a chunk of the day in troll jail, though got a break for lunch, grabbing a pita sandwich and then back to jail, until we finished the day on some grouper drifts for a few more grouper including a few larger ones. We worked back to the 13, where we'll spend the night, hoping for the tuna to bite again. From there, the plan is to run out to Alijos Rocks…hoping to still have Team 3 up to get things started. Dinner tonight was Asian Shortribs, rice, and vegetables.

November 7 Woke up around 0330 to biting tuna, more of that stock grade Ridge tuna, with lots of smalls to wade through, with a few 18-25…I tagged a couple in the 12# grade, reserving some wishful thinking tags for wahoo or the larger grade yellows that we’ll fish when we arrive to the Rocks around 2200 tonight. Snuck in breakfast with Bruce and Mike, biscuits and sausage gravy and eggs, went back out catching a few on the battle scarred OTI popper.

Spent a lot of the morning throwing the jig and the bomb, hoping for a stray wahoo…no love.

We took off around 0700 for the Rocks, along with the Polaris Supreme and the Excel. It became official that this trip would not finish off on the Bluefin grounds as the weather is forecast to get shitty, with 35 knots of wind expected…as always, it's all about timing. Many years our trip destinations are influenced by tropical weather…this year, it’s the first big westerly of the year. Assuming we rebook for this same trip with Hi's Tackle, it is actually departing 10 days earlier in 2021…hopefully the craziness of 2020 will be behind us. Also on this day the Presidential Election was decided…another cycle offering two bad choices is over.
Reactions: TrixKelly, vegasandre, Pangamaster and 10 others
Upvote 0
M

Great report John. I see myself reading the report many times between now and our next trip. Thanks for taking the time to put together a great report.
Reactions: NaplesJohn
Upvote 0

mike atkins said:
Great report John. I see myself reading the report many times between now and our next trip. Thanks for taking the time to put together a great report.
Click to expand...

Thanks Mike....how many days until the next trip?!
Upvote 0

John, I can see me on the bow of the Excel cranking on a bomb!
Toggle signature
When I was your age, Pluto was a planet.
Reactions: caballo del mar, Pangamaster, Russ Scholl and 2 others
Upvote 0

hucklongfin said:
John, I can see me on the bow of the Excel cranking on a bomb!
Click to expand...

You are hard to miss!
Upvote 0

Funny that is me wearing the Charger jersey midship on the Excel. Saw you guys out there for that epic YT fishing and a few wahoo
Reactions: caballo del mar, Bill W and NaplesJohn
Upvote 0

mooose29 said:
Funny that is me wearing the Charger jersey midship on the Excel. Saw you guys out there for that epic YT fishing and a few wahoo
Click to expand...

That YT bite was truly crazy...one for the memory bank!
Upvote 0

odnealtim said:
Great report,,,as always thanks for taking the time
Click to expand...

Been doing these trips 25+ years never seen anything like it. Insane. It’s why we keep coming for that chance to experience something different.
Reactions: jiggermyster
Upvote 0
D

If you zoom in on the Polaris supreme that is me in the middle of the stern with the white hat and white shirt facing the bait tank. Great Trip
Reactions: jiggermyster, NaplesJohn and Bill W
Upvote 0

Still trying to figure it all out

Every time I look at the picture of the Excel the rust stain running down the bow makes me cringe. I know it is just cosmetic and likely not even seen from the boat but it looks like a giant skid mark.
Toggle signature
Fear No Fish! But Respect Them All!
Reactions: PheasantHunter
Upvote 0

Looks like a great trip! Thanks for sharing!
Upvote 0

Fun times...friends and fishing...always good!
Upvote 0
Show hidden low quality content
You must log in or register to reply here.