Has anyone ever fished Scorpion Bay in February?

Were taking a 2 week long roadtrip from Norcal all the way down south and wondering if anyone has any info or recent reports from the area!
Upvote 0

fish the coastal nooks and crannies to the north.

Spend the time at abreojos instead. Abreojos is hands down the best coastal fishing I've ever experienced, and the surf is great too. Scorpion bay is a 6 hour detour (you have to double back and backtrack 100+ miles as the "road" that looks like a more direct shot from Ignacio is not a road, it's more of a horse trail with quicksand everywhere). Unless you are going June-October...or July-October to be safer, you're not going to have a hint of surf at punta pequena (scorpion bay). If you are going in summer, it's a great experience (will be crowded if there is surf as the planes fly in surfers by the dozen, but the halibut fishing is good) If you guys are surfing also, hit up 7 sisters. You can fish those points and as long as there is good west in the swell, you'll have one of the points to yourself to surf your brains out. I can't stress enough though, don't try to take the direct route to Scorpion Bay if you've never driven it before. Getting stuck is probable, getting lost is guaranteed and this time of year, there won't be much traffic on that 150+ miles of terrain (could be a week without a vehicle I'd imagine). There is no road to follow, just chunks of area that you can see where previous trucks have gotten stuck.
Upvote 0

I don't normally do this, I come from the old-school notion that adhere's to the time worn saying "loose lips sink ships" but I'm in the mood so...

Not to discount Breakwater's account entirely but let me help with a few facts. Although I agree Abreojo is awesome and La Bocana has great fishing Scorpion Bay is really great as well. Yes, it's a bit further but if you are set on this area then don't let a little dirt road scare you.

As far as the road goes, yes it is long and it's rough but it's not 150 miles. The road from San Ignacio to San Juanico is 105 miles and it is paved down from San Ignacio quite a ways so I would say it is only about 85 miles of dirt (maybe less). That's still a long way but it's traveled regularly (daily) by the locals. And, it's whale watching season so there are even more cars on the road. If you don't know it then it's best to follow someone but it's really not that bad. As long as you stay on the hard pack you will be fine - I never have to use 4wd when crossing. By the way, if you haven't done the whale watching tour it is most definitely worth it - an amazing experience! Oh, and if you decide to stick to the pavement the long way around the south is only three or four hours more - not that much time for a two week trip.

As for the fishing... I was out on my panga just the other day and we caught our limit of decent sized dorado within an hour and never got further than three miles offshore. Dolphin everywhere, whales passing by, beautiful blue 72 degree water... not a bad experience. 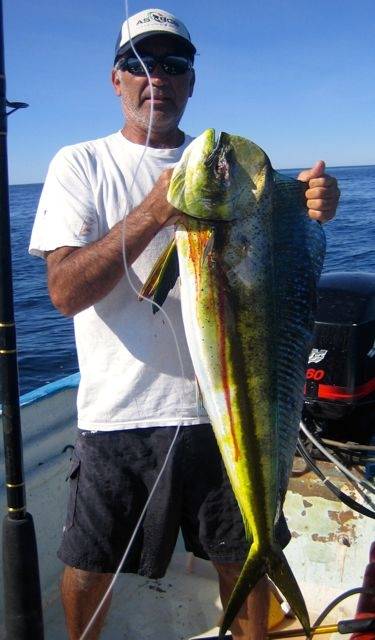 This is transition time with the windy season approaching so things can change rapidly but that's the same up and down the coast. You never know how long the dorado will hang out but I hear there are still some small (5 to 10#) yellowtail running as well. And, of course, the beaches in this area can produce some great fishing - corvina, halibut, rubber lipped perch, sand bass, pargo, even the occasional snook (if you get really lucky).

Again, Breakwater is right, normally there's not much surf here in February. Summer is the surf season and it does get crowded. Not that I want to promote surfing here and make it even more crowded but dozens of surfer's flying in? The only airstrip in this area is ten miles away and it's private so only a few people have permission to land. Surfer's do flock in on big swells (either driving or flying commercial to La Paz or Loreto) but let's try to get our facts straight. Surfing can be crowded so if you come in the summer bring a good attitude - it's makes all the difference.

Abreojo is awesome. So is Asuncion (better quality yellowtail close to shore in the winter months). And, who could argue that the 7 Sister's isn't incredible. But, as you can see, this area is pretty good as well.

If you want more info just pm me.

any recent news from mag bay?