Has Anyone Ever Been Stuck by a Gaf on Party boat?

A couple years ago there was a report on here of a few guys that were bringing in a large fish with a few gaffs and I think one of the gaffs slipped or pulled through and ended up in one of the guy's leg severing or slicing through the critical femoral artery. I believe he was bleeding out very badly and luckily one of the guys was a doctor or maybe they called in a nearby boat that had a doctor onboard but I think they were able to get it under control.

Gotta be very careful when bringing in a huge fish with a few gaffs and 2-3 guys. Those gaffs need to be in solid in the head and not just in the meat.
Toggle signature
Some times killing fish is like masturbations, you just don't talk about it. -AlbacoreShuffle

Never a gaff but a daiwa zakana to the leg . Went straight through the jeans 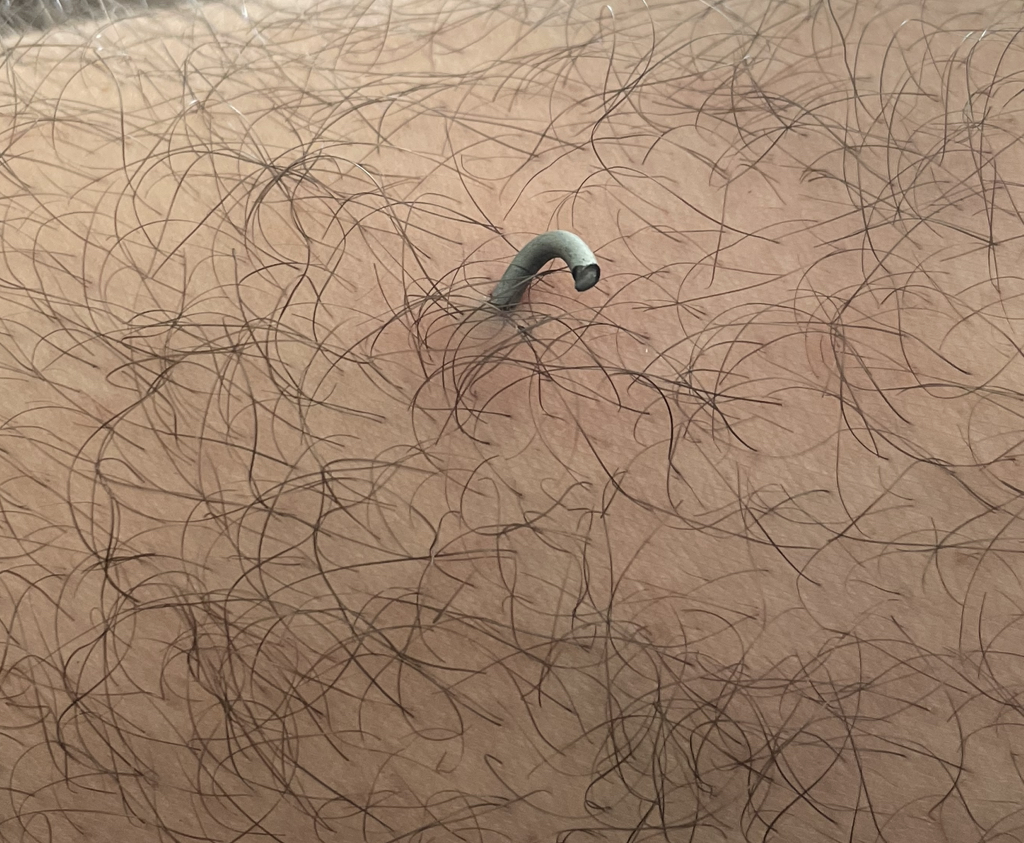 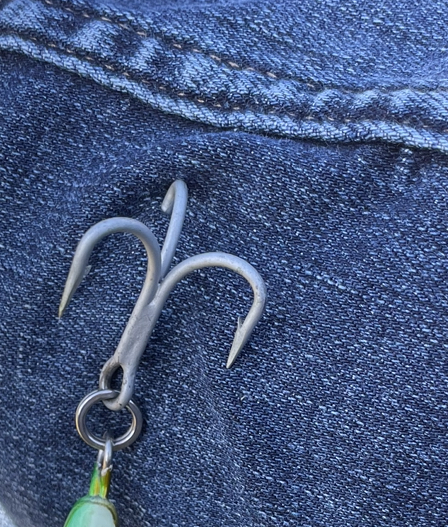 Pulled a gaff out of a side rod holder with my calf, on a private boat, past the barb. Made me sit down and contemplate, Probably needed stitches, but had a beer and a butterfly band aid instead...the yellowtail were biting.
Reactions: repo805, Chum_slicker, watersdeep and 1 other person
Upvote 0

Which Time? Yes! That is why I bought a pair of mini Bolt cutters for onboard Surgery...Those trebles will get U. It will be your turn...
Reactions: Kevin A and Phishy Phil
Upvote 0

Years ago I went to Alaska for a 6 day float trip on the Kanektok River. Since we were in a remote area with no medical services, the rule was “no contact with fishing gear” without sun glasses on. I thought it made sense, imagine the radio call, aircraft cost, and medical costs associated with a back country eye injury. Other hazards like braided line cuts can be bad too! Be careful and have a contingency plan.
Toggle signature
Stay Classy- San Diego!
Reactions: 7emptsT and Spoons
Upvote 0
C

I’m from AZ and fish in the Sea of Cortez on my boat a few times a year usually with friends who don’t have a lot of experience. We camp on the beach, beach launch the boat, eat/drink well, and generally have a great time.

A couple years ago we were out in somewhat rough conditions catching a bunch of yellowtail trolling magnum X-Raps and the coolers were getting full.

We brought in a decent yellow and threw it in the cooler on top of a pile of others since we had to deal with bringing in a fish on the other trolling rod. This fish still had the X-Rap 40 in it’s mouth.

While I was dealing with the other rod, the fish flips out of the cooler and is going apeshit on the deck of the boat. It ends up sending one of the trebles through my lower leg, with one hook of the rear treble going in and coming back out. It didn’t hurt much immediately, but this fish is still flopping on the deck and the other side of the lure is attached to my leg.

I had some wire cutters in my tool box under the bow, but in the moment it was going to take too long to tell one of my friends where to find them. One friend kept his foot on the fish and I took the pliers, crimped the barb, and backed it out the way it went in. Needless to say there was as much my blood on the deck that day as fish blood. We pulled the lines in and headed for the launch, cleaned it up, and found some generic antibiotics at the bodega in town.

I think a friend got a video of some of it but I don’t have it handy. Here’s a pick of the aftermath a week or so later. I now make a priority of removing the hook before anything else and try to keep heavy duty wire cutters easily within reach just in case.

I don’t think it hurt as much initially because of the shock of the situation, but it sure hurt taking the hook out and afterwards. I still have the scar for proof. 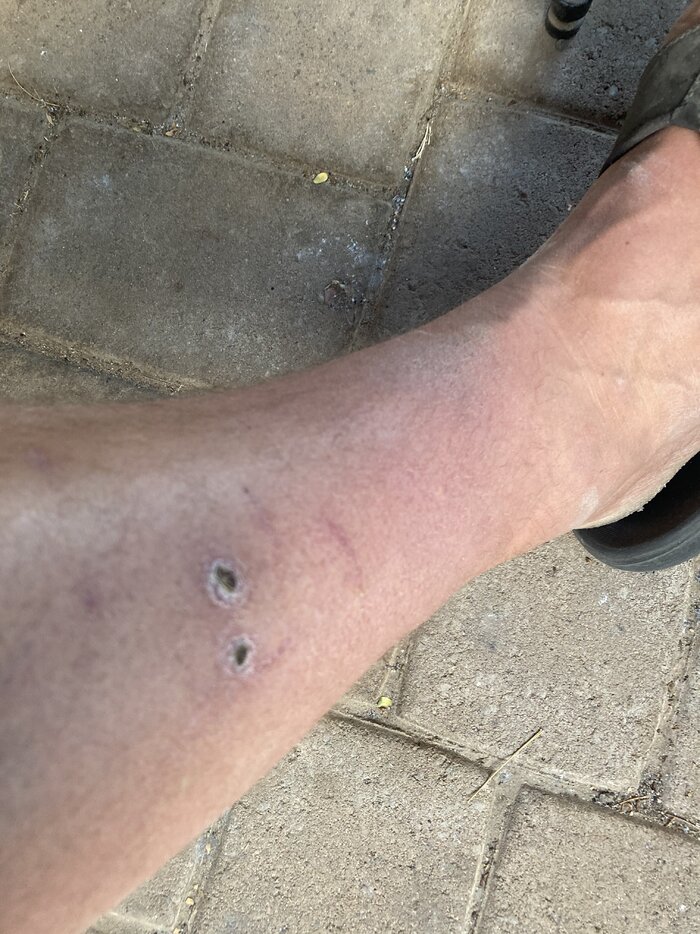 stickbass said:
Someone must have been stuck by a gaf at some point
Click to expand...

Not stuck, but a buddy got the dull end straight to his nose. SNAP.

Other buddy set it. A few napkins up the nose and he kept fishing.

When the Dr. took out my left kidney, I realized what it must feel like to be gaffed. Since then I have nothing but respect and compassion for all those fish coming over the rail.
Reactions: stickbass
Upvote 0
T

iclypso said:
Like, has a deckhand ever gaffed a passenger? They've probably wanted to but bad for the tips, you know...then they'd have to sharpen them.
Click to expand...

Some passengers they'd probably like to give a good clean headshot gaff through the eye sockets!
Upvote 0

It's like driving always good to look out for the other person, I find myself ducking and weaving when the jigs are slinging!
Had a 6 day years ago on the INDY we went to the ridge and had wide open yellowtail fishing no lie all 31 passengers were slinging iron fortunately not a single incident.
Toggle signature
JC
Upvote 0
A

Last year on the San Diego, Fisher cracked me in the head with the gaff as he swung a fish over the the rail. He knew it as soon as he did it. He was so apologetic...lol. A year later, he recognized me and said to me as we were pulling away from the dock..."I'll try not to bean you with the gaff this time" I had totally forgotten about it, but he didn't. Now, every time he sees me step on the boat we have a little laugh about it.
Upvote 0

stickbass said:
I’ve never been on one, but the videos I see look like mayhem. Someone must have been stuck by a gaf at some point
Click to expand...

stickbass said:
I just saw a vid from a hot bite online and I was thinking I’d be inside hiding until it was over
Click to expand...

Everyone onboard will be safer if you stayed safe at home.

As a young deckhand on a sport fishing boat, I clocked customers with the blunt end of the gaff several times.
I always yelled for space before gaffing, but some people just don’t get it, until they do!
If you respect the hook end, it’s not likely to harm you.
Upvote 0

Buddie took the back end of a gaff to the face while a declkhand was gaffing a fish and got a 2” gash under his eye.
Upvote 0

wils said:
Everyone onboard will be safer if you stayed safe at home.

You don’t have to worry, I wouldn’t step foot in California. I just like reading the reports
Upvote 0

Two, this didn't happen to me, but I'm kind of dumb sometimes, so it could have. Buddy of mine and I back in pre-statute of limitation time were night fishing for stripers (not strippers, that's another story, one that I actually didn't participate in).

Them stripers came through, a hootin and a hollerin! Well, boiling on trout at the surface anyway under the light of the moon, and boy were we ready, with our black and chrome rebel fake rapalas. Only problem, the stripers weren't biting our setups, so we hiked around, eventually separating off into the dark seeking our own fortunes.

I went back to our starting location, and my buddy wasn't there. I had passed him headed out, so must have gone around him without seeing him on the return trip. I hiked back a little ways and found him at water's edge and he said could you hold this? Holding up a nice striper. Um, OK, sure. Then I saw he and the plug were one. He fished out his dikes, cut the semi-thin wired freshwater treble off his hand thanks to his powerful grip, and we bailed. When we got to a stopping point he cut the now protruding barb off, and that, as they say, was that.

My buddy is kinda tough though. I'm a total puss wuss. He still fishes. I occasionally dream about fishing. But not as much as flying or being caught in big surf, though.

Good fishin'!
Toggle signature
Sometimes you feel like you are absolutely fucked. But then you look at the situation again and it turns out you are only like 40% fucked. --Mingma Gbyabu Sherpa

No gaf but I got a ricochet mackeral to the nuts last weekend. Wide open dodo bite and a guy get bit 10 feet away from the boat as the pulled up to set the hook the dodo let go and the damn thing slig shot right back to the boat and nailed me good.
Toggle signature

what would you do?