I never posted a report on my shorter trips this year, but I suppose that all of them were more or less on long-range vessels, so I figured I’d lump them together with my Guadalupe run that just returned. So, I’ll start with the most recent and then add some highlights with the others. If you don’t feel like weeding through all this, check out Tim Turis’s post from the Excel that sums up Lupe fishing in short order. Luke’s report is a succinct version of mine as I was a guest on his charter...

This year was a return to form for me after missing most of 2020. I was so happy to get back on the Apollo with @Luke on his annual charter which was extended to a 6.5-day this year. We left Friday night and were fishing on Sunday after the obligatory stop in Ensenada--and the typical snotty crossing to the island. 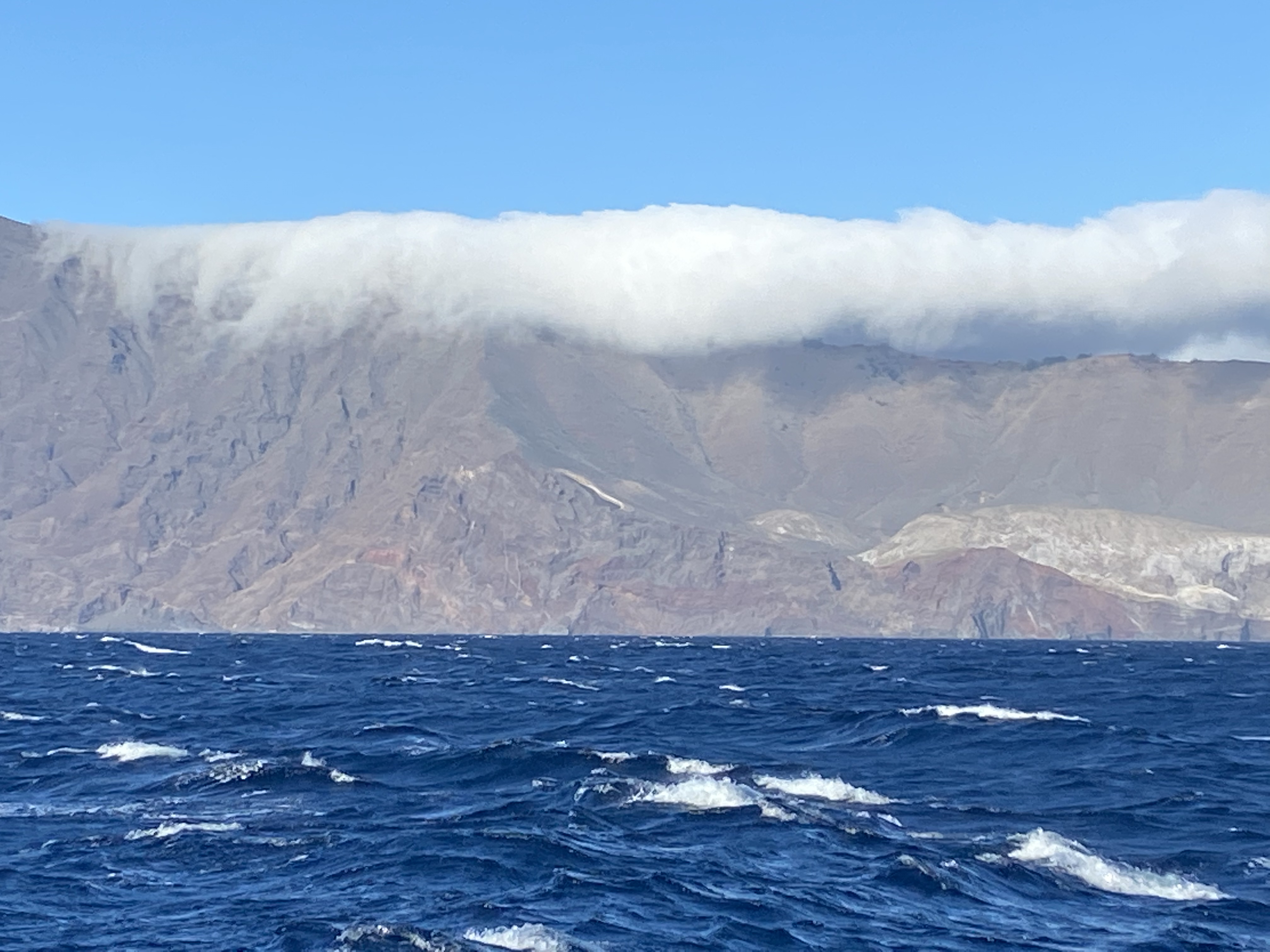 Day one of fishing was a bit slow as we all got our bearings and reacquainted ourselves with island fishing. I think the boat had six smaller tuna landed with a smattering of break offs, bite offs and other tackle failures. I did not get a bite all day. 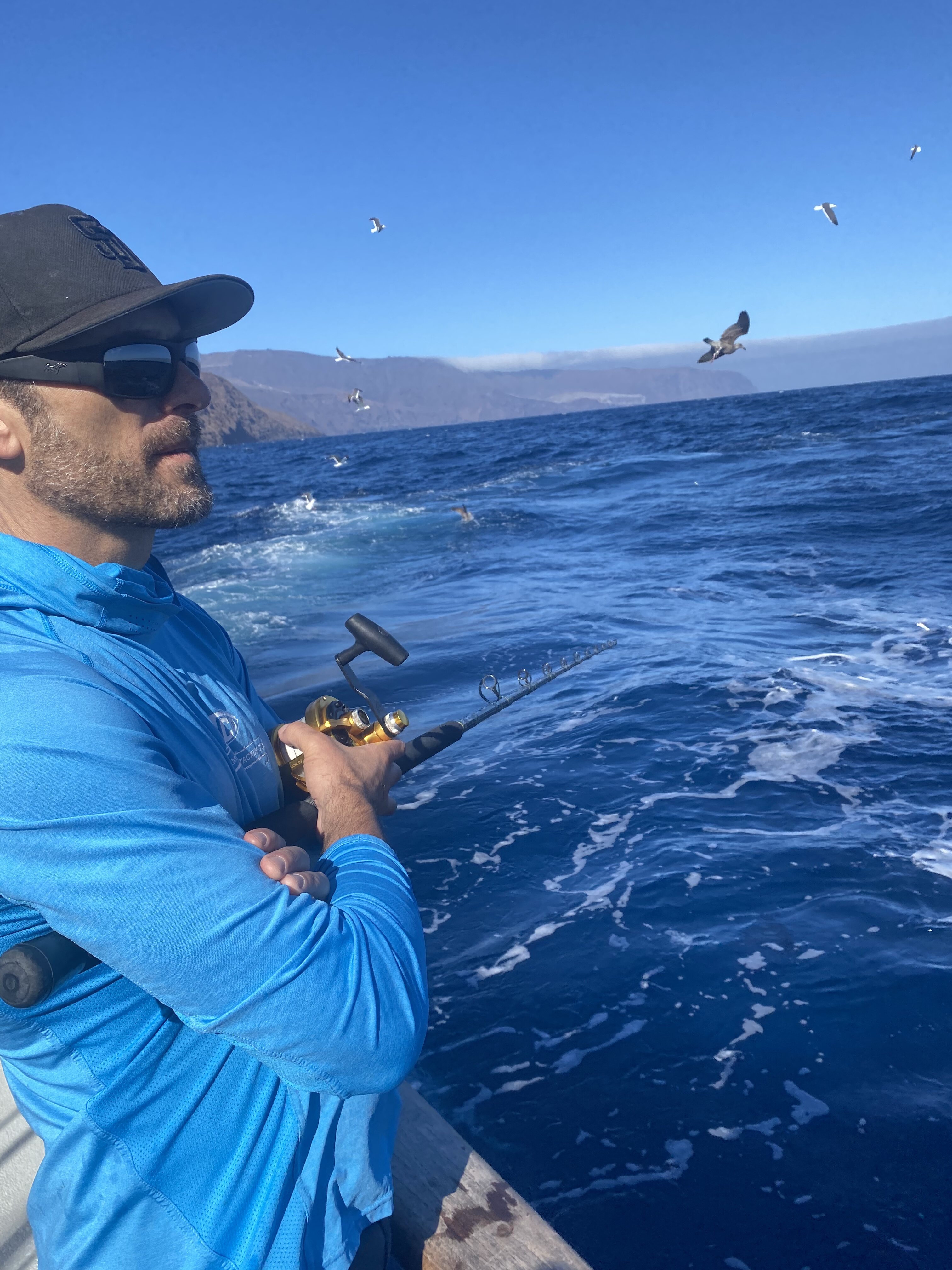 "My time will come"

Day two was a bit better on quality and I did land the one fish I hooked. It went about 100 lbs or so. The birds and sea lions were quite the pain taking many baits. The sea lions are quite good at getting the blood flowing when they grab your bait and swim away with it--only to pull it off your hook as you push the drag lever forward ever so slightly! After a while, it became very clear that the sea lion bites were not tuna-- and that quick bit of excitement was only wishful thinking. A tuna bite is distinctly more abrupt and quick to pull line--something I was able to calibrate to on day 3… Speaking of Day 3, it was a good day for bites as I had four, pulled two hooks, and landed two. One was a smaller 40-lb unit, the other around 100 lbs. The yellowtail made a showing on this day, and some absolute slobs were landed. With tuna still around, I focused most of my efforts there, and did just a few yoyo drops. I did spend the better part of the midday lull chunking a tuna heart. The only bite I got resulted in one very large whitefish (released) that was able to get its lips around a 10/0 circle hook! Day 4, we relocated and the boat put the hurt on some beastly yellowtail. Truth be told, the yellowtail did their fair share of hurting us, too. Many fish made their way to the reef taking all kinds of gear with them! I landed a personal best 44-lb fish on the dropper loop (I used the Jeff Buroughs method to secure the sinker). The tuna were still showing a bit, so I put my attention to them and landed another two--one at 100 and the other just under 100, I think. I also got another 30-lb YT on the flyline spanish mack, and lost another one to the rocks, also on the flyline. 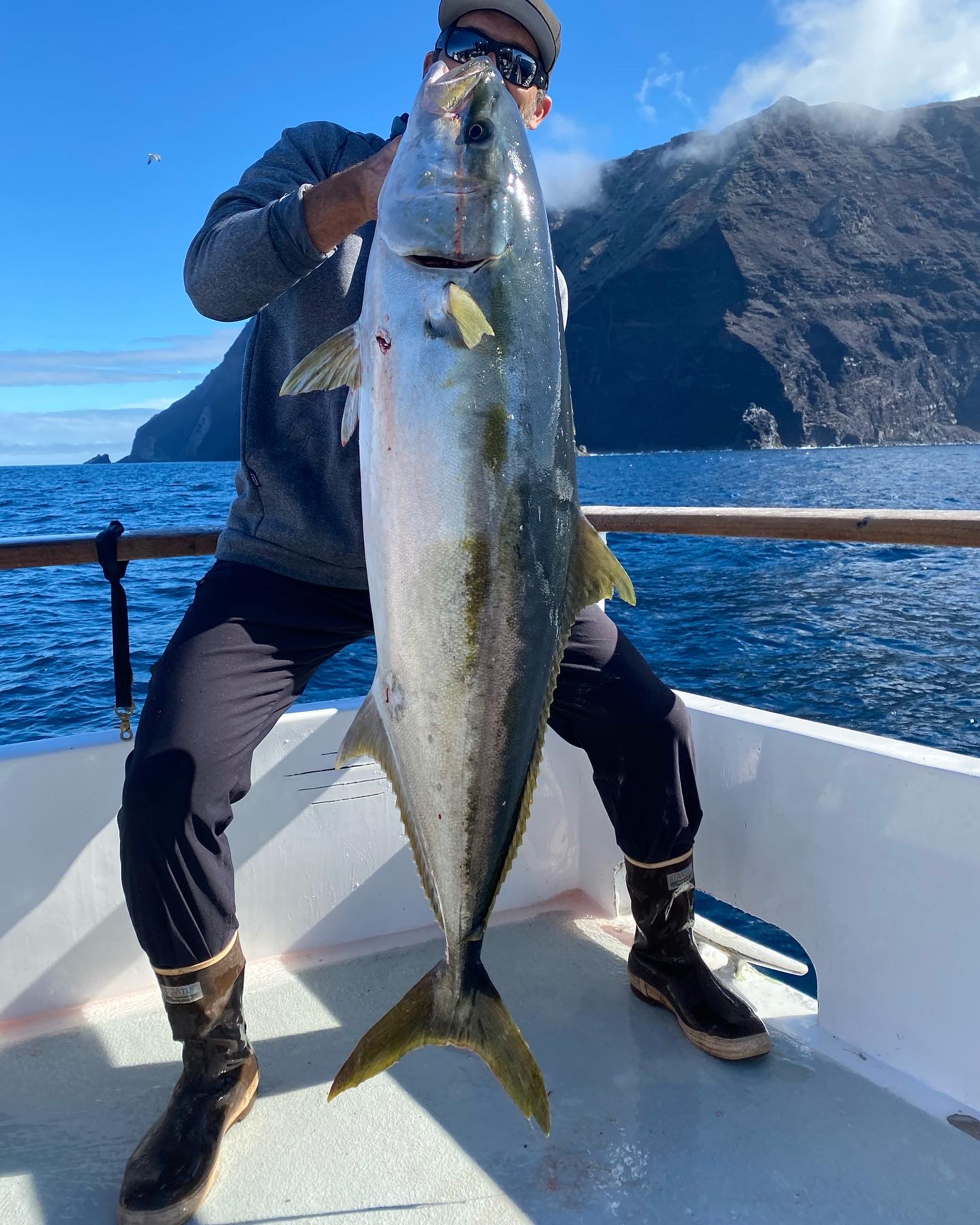 This year the fish did not seem that line shy, but the bait was small, and the current was at times smoking, and other times barely a trickle. You definitely had to put in the time to get a bait that would swim away from the gauntlet of birds and sea lions. One trick is to cast your bait right at the sea lions which allows the bait to zip below them before they can spin around and get it. Monitoring the bird traffic and knowing about where your bait should be also really helps reduce booby bird interactions--they turn and wheel around just before they dive bomb you! One thing I heard more than once: “a bird picked up my bait and dropped it, and a tuna ate it right after!” In the future, I may try to let my bait soak a bit after getting picked up like that, but I honestly don’t think I have the patience for it! 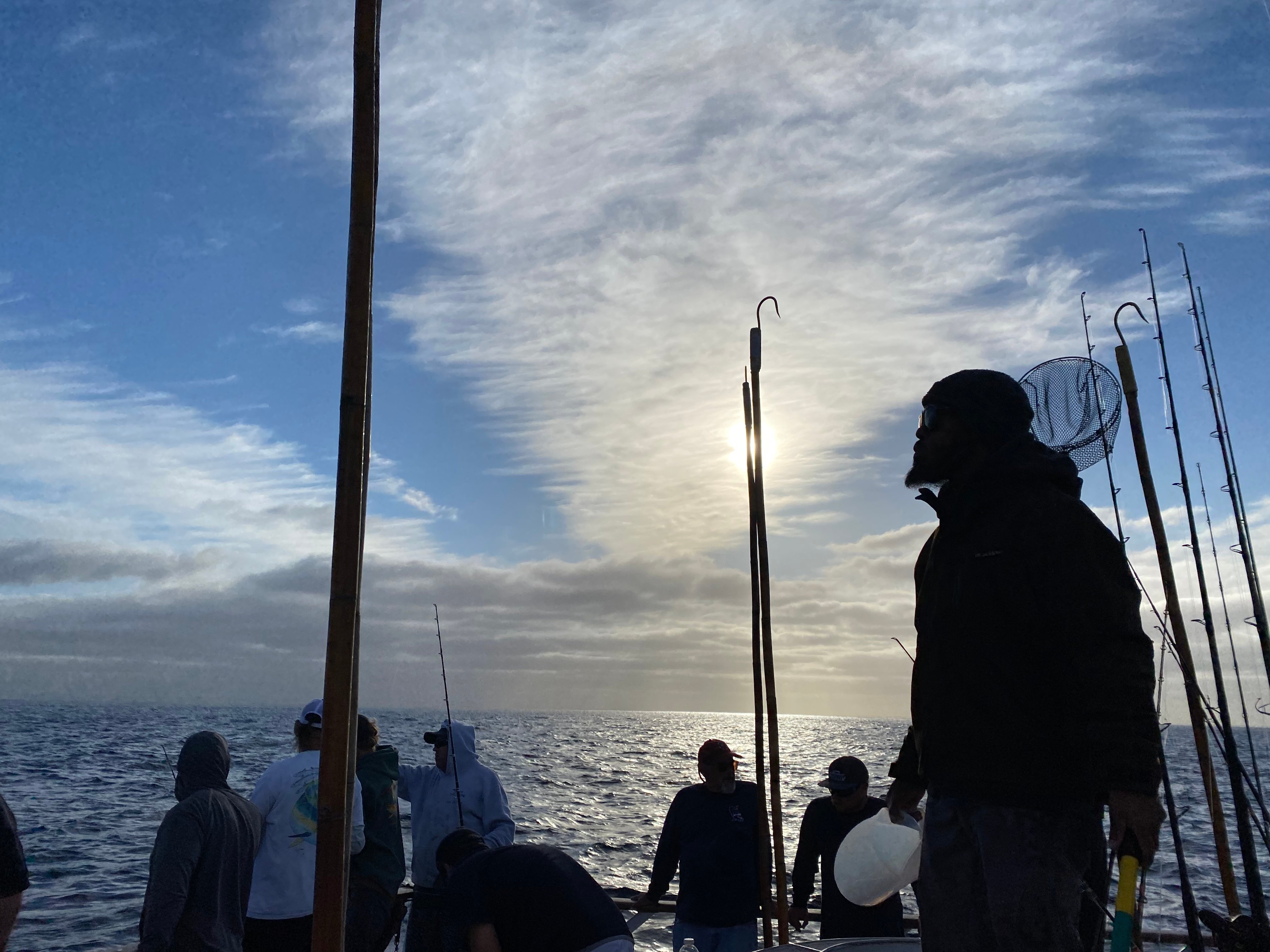 Capt Alex contemplates his next move

I brought the finesse gear this year, but didn’t need it. I neglected my note taking, so I cannot recall if I got one fish on 50#, but all the rest came on either 60 lb Seaguar Gold (TRQ40NLD2/Calstar 800XXH), 80 lb Premiere (12VISX/Calstar 770H), and 80 lb Blackwater (16VISX/775XH). I used Charlie Brown 1/0 and 2/0 circles with decent results--I did pull the two hooks on the 1/0 size, but they were weird bites and I don’t think I let the fish run long enough. Every other fish was pinned right in the corner of the mouth. When I went to the heavy gear, I bumped up to a 3/0 Mutu to fish the bigger scads and spanish--several tuna and YT were hooked on the larger spanish. Bites came in every way possible. Mostly on short soaks within seconds, but a few on the mid-distance, and the last bite I got came at around 200 yards behind the boat.

A shot of why I like a longer butt section on my rail rods--full armpit purchase!

Another observation to add to the long-standing YFT versus BFT strength discussion--those YFT are way meaner. They may not go as squirrely as a bluefin, but they definitely pull much harder. Add some ripping current with a boat sitting on anchor, and you better be ready for some pulling!


Okay, if you’re with me so far, let’s sum up the rest of the year starting in April. Mini-long-range trip #1 was on the Shogun. We targeted bluefin, and expected smaller fish, but were pleasantly surprised with the jumbos. My buddy got one over 100 on the flat fall at night, and I managed to hook two good ones on the sinker rig in the daytime and landed one of them. In my typical fashion, I got a little heavy handed on the second fish and broke it off just beyond gaff range. One notable--the drift and current were very mild and dropping from an 8 oz sinker to a 4 oz resulted in quick bites. This was my third or fourth time in the Shogun, and the first with Rene at the helm. Always a great experience. 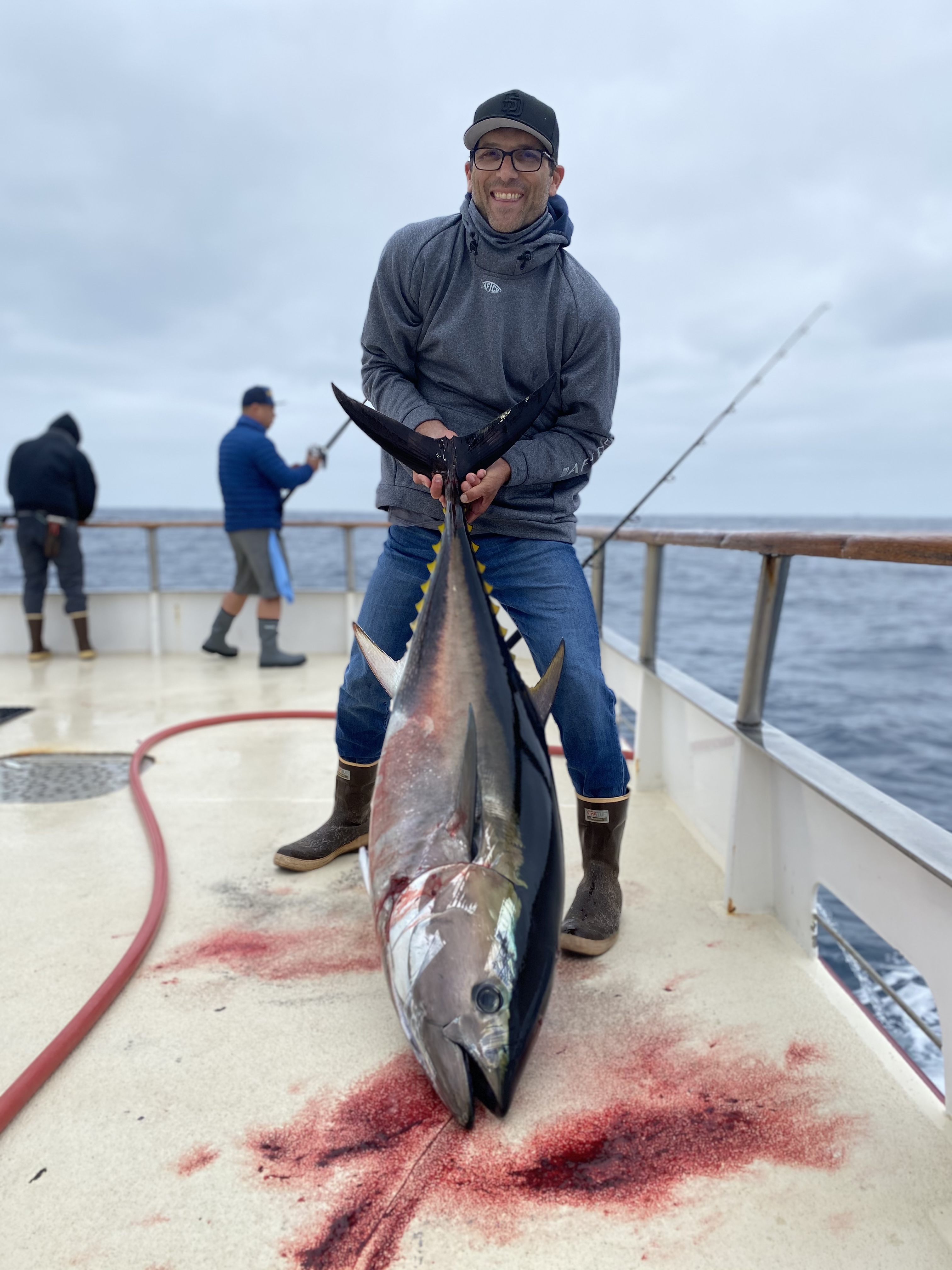 Next up was a 1.5 on the Intrepid in early May. Again we targeted bluefin. Fishing was scratchy, and we managed a few of the smaller 20-25-lb models on light line (25# Gold Label was the ticket). I also hooked what looked like a 60-lb fish that bit through that light line after a couple good runs. The Intrepid is quite the ride. Very well appointed, comfortable, and the crew from Capt. Bill all the way down was on point. Moving into June, I got an invite to fish a 2-day charter with the Dana Wharf Rod and Reel Club on the new Thunderbird out of Newport. The new rig is laid out a little differently than a typical sportfisher, but very well appointed. If you have not fished with Capt Jeff Markland, I highly recommend it! He’s very fishy and every bit as hilarious! This was some of the best surface iron fishing I’ve ever experienced for both yellowtail and bonito. The YT were anywhere from about 12-30lbs and I landed a 15.6 lb bonito on the Tady A1. Fantastic trip. From July-Sept, we did three mini LRs on the American Angler. All three of these trips were anywhere from good to stellar. Brian Kiyohara ran the bookends while Ray Lopez took the helm for the middle trip. For anyone thinking of bringing younger family members, the AA has to be hands down the most accommodating and welcoming long range vessel out there! The crew works incredibly well with the kiddos--adults, too! These trips saw a smattering of larger BFT at night, daytime schoolie BFT, some island yellows, and even some YFT. Typical for this year, the night bites came on whatever jig you might get in front of the fish, and the daytime fish were more of a finesse deal with 25-40# fluoro and a small hook. I tried the Gamakatsu Nautilus in size 2 for the school fish and really liked it. My good friend Annie on a night-time lunker. Hooked on a specially rigged Williamson Kensaki. That’s a wrap for 2021. I was very grateful for the time on the water. Thanks for looking. Feel free to hit me up if you have any questions about the fishing or the boats. We will be adding to the LR list next year with a trip on the Indy in July. Looking forward to it.
Last edited: Dec 14, 2021
Reactions: locvetter, Zika, litzsout619 and 47 others
Upvote 8

Man! I even previewed my post and all the pictures showed up. Back to the editing board, I guess.
Reactions: Tunahead
Upvote 0

Great report in between many unseen pics.
Might need to downsize them all to post.
Also only a few on each post, not all at once.
Beyond that ask Jason.

Thanks for taking the time to write it up & including the quality photos.

Chris
That’s the biggest Bonito I have ever seen! Great reporting

Well, that was an enjoyable read! Great current tips on the island fishing and nice annual recap.
Reactions: TOTW
Upvote 0

Women of the West Rule!

Look like you had a pretty great year!
Toggle signature
I'm a woman who fishes. Size DOES matter!
Reactions: TOTW
Upvote 0

After a 10 year hiatus, this is what I have learned after 3-3day trips this year.