Short version - Had my limit of quality yellows by 10:30, 58 yellows for 34 anglers in total. Nice quality reds, large Bonita and a few ling cod filled out the rest of the sacks for all on calm seas.

Longer version - we got to the high spot at Punta Colonet at 7:00 am in chilly, calm conditions. Several boats were already there. Gavin did his usual great job of looking around until he metered a nice school of yellowtail worthy of stopping the boat for. I dropped a blue/white heavy Salas 7X, let it drop to the bottom, cranked the handle 3 times and was on, as were half the folks on board. Love it when the first cast of the day is an instant hook up.

Somehow I managed to stay out of tangles and brought a fat 21 lb yellow to gaff. Not everyone was so fortunate as there were a number of casualties in the mayhem. By 10:30 I had my limit of yellows on board, as we’d repeat the search, stop, land a few and search some more routine. Color didn’t seem to matter - my second one was on a red Salas 6x, third and fourth was on a long green/gold/white knife jig, and the fifth was on a sardine hooked to a Carolina rig with 4 ounce sliding sinker. What worked was dropping to the bottom with a large heavy yo yo, cranking like the hammers of hell straight up 30 - 40 cranks, dropping back down if not hooked up, repeat.

Around 11 am the yellows were still around but off the chew, so we switched to targeting rockfish. There were some nice quality reds caught, I got my largest one on an indestructible octopus I had caught over a year ago at Salt Creek that I kept in my freezer. I caught 2 nice reds and a fat bank perch on that one pummeled bait.

We tried for yellows a couple more times in the afternoon, the boat only managed 2 more. Lots of big bonito around, crashing bait and jumping on jigs in the top 1/4 of the water column.

Was super cool catching yellows on such a flat calm sunny day, with the snow capped hills of the Mexican coastline off in the distance. After having my last two trips this year cancel due to weather, was nice to finally get the timing right.

Kudos to the crew of the Pac Queen once again - those guys are always on top of their game. Heather and Mike did a great job in the gallery, the deck crew was on top of tangles and nailed every gaff shot, and Gavin the captain is one fishy dude. Love fishing on that boat with that crew - another great trip! 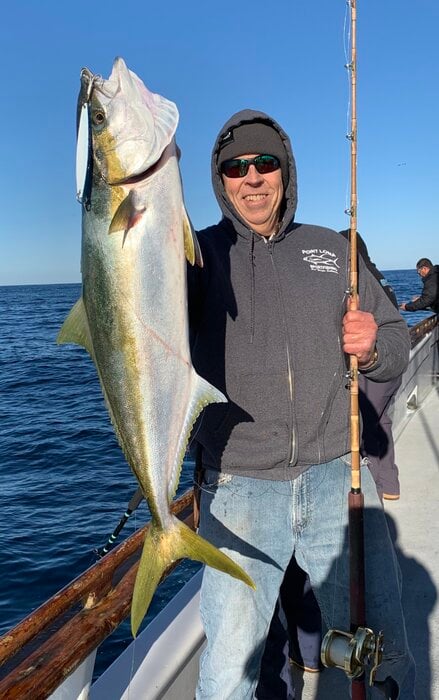 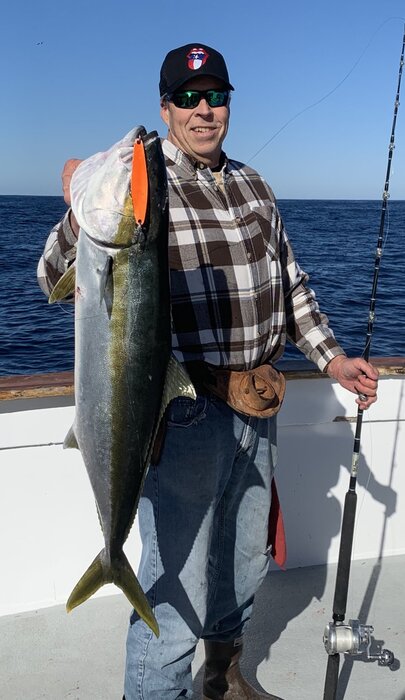 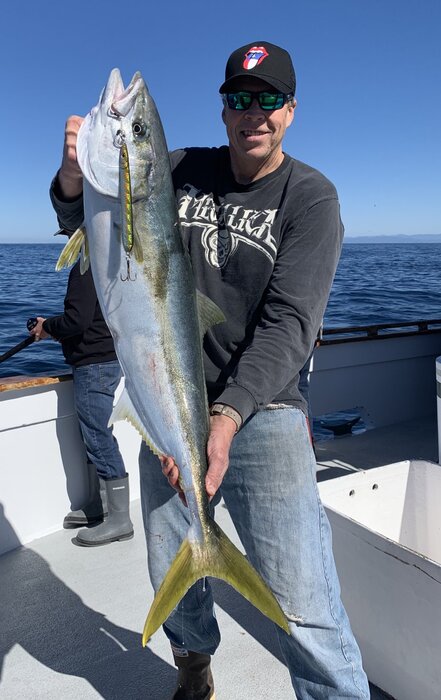 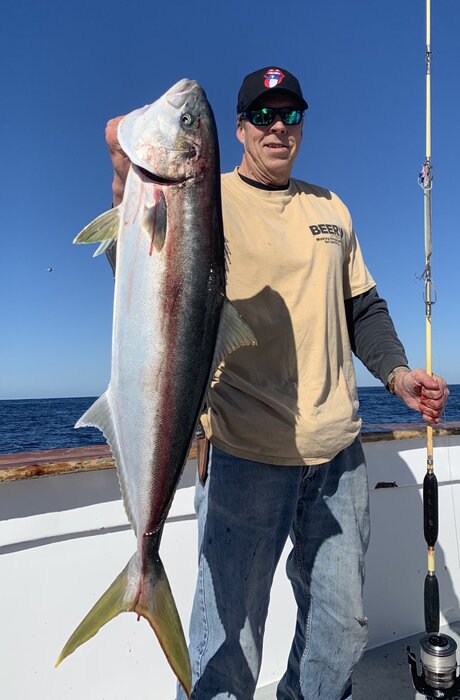 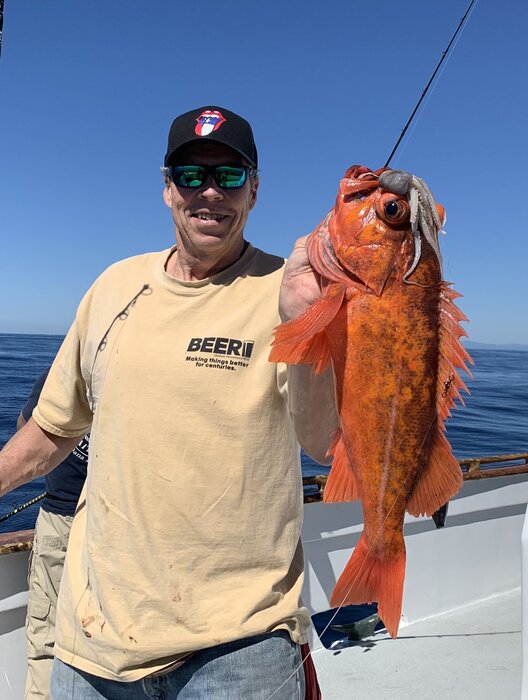 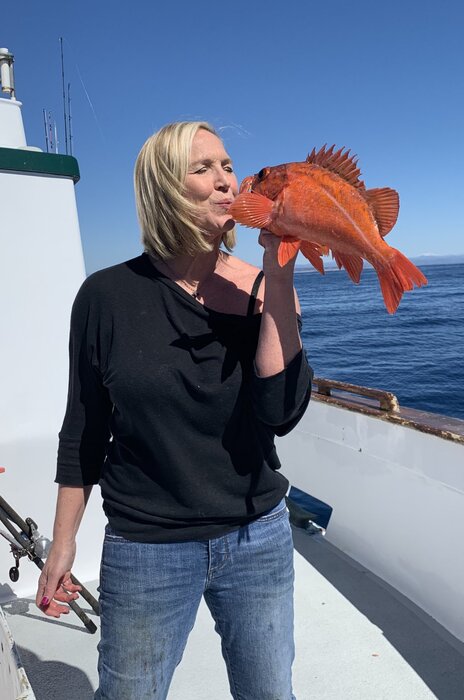 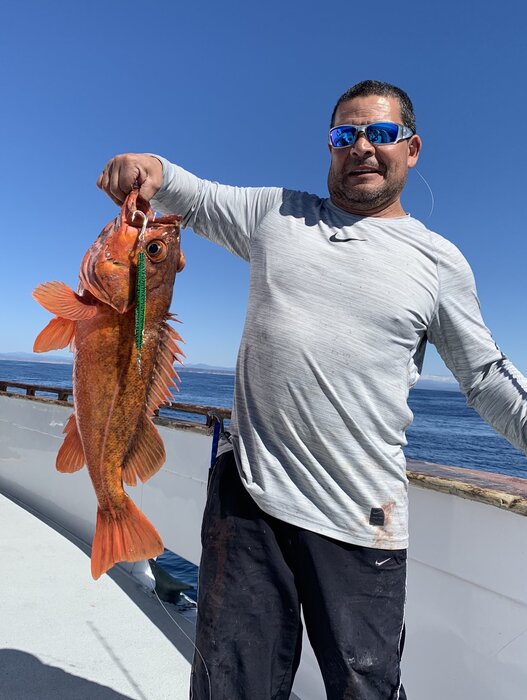 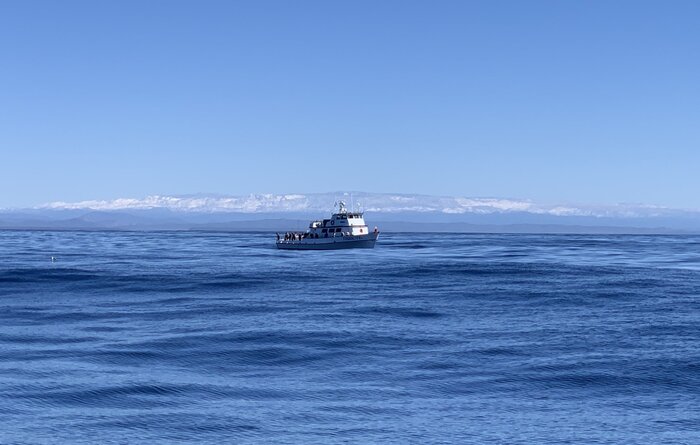 Great report.
Toggle signature
IF YOU WAIT FOR YOUR FRIENDS TO GO FISHING, YOU MAY NEVER GO FISHING.
Upvote 0

Thanks for the post!
Toggle signature
"When beholding the tranquil beauty and brilliancy of the oceans skin, one forgets the tiger heart that pants beneath it; and would not willingly remember that this velvet paw but conceals a remorseless fang." H.M.
Upvote 0

Thanks for the report!! Well done! Ive recently converted some colt snipers to jigging style, with the assist hooks from the top... Extremely good success on the deep structure bass. How were you working the knife jig? Speed jig N wind or straight retrieve?
Upvote 0

GOFAST88 said:
Thanks for the report!! Well done! Ive recently converted some colt snipers to jigging style, with the assist hooks from the top... Extremely good success on the deep structure bass. How were you working the knife jig? Speed jig N wind or straight retrieve?
Click to expand...

I’ve never used a knife jig before so I went on you tube and learned. Who says an old dog can’t learn new tricks? I think the herky jerky nature of the jig n wind is what made the difference. I didn’t try a straight retrieve as the rocks claimed the jig after quickly landing 2 yellows and a red on it. Got to get some more of those.
Reactions: Tunahead and GOFAST88
Upvote 0

PATYMELTER1 said:
Great report Don..... NICE YT for this time of year! Miss fishing with you buddy. Let’s do a Phenix PV trip in 2020!
Click to expand...

Why wait ‘till 2020?
Toggle signature
When I was your age, Pluto was a planet.
Reactions: sierraazuel
Upvote 0

Don,
Great report. I’m going on the 3/8 and geared for the heavy yo yo and rock fish. Is it worth the effort bringing the surface iron rod? I fish to the end and have fun with the bones.
Glenn and thanks!
Toggle signature
c-nut aka Glenn
Upvote 0

c-nut said:
Don,
Great report. I’m going on the 3/8 and geared for the heavy yo yo and rock fish. Is it worth the effort bringing the surface iron rod? I fish to the end and have fun with the bones.
Glenn and thanks!
Click to expand...

I would definitely bring the surface iron in March. I threw it a few times on this trip to have fun on the Bonita, but have had epic times in March on the surface iron at Colonet on yellows. They came up and boiled on the surface at one spot this trip, water temp was only 59, but in a couple of weeks they’ll be higher in the water column. Good luck!
Reactions: Ctony.clark
Upvote 0

Poseidon Group's Back Up Trident Thrower

Looks fun. Instead of hitting Colonet... I will humbly say I got a giant Spottie all of a pound and a half, maybe even two out of SD Bay yesterday on a warbaits jig/mc slug and I got to do it in front of snow capped mountains too! 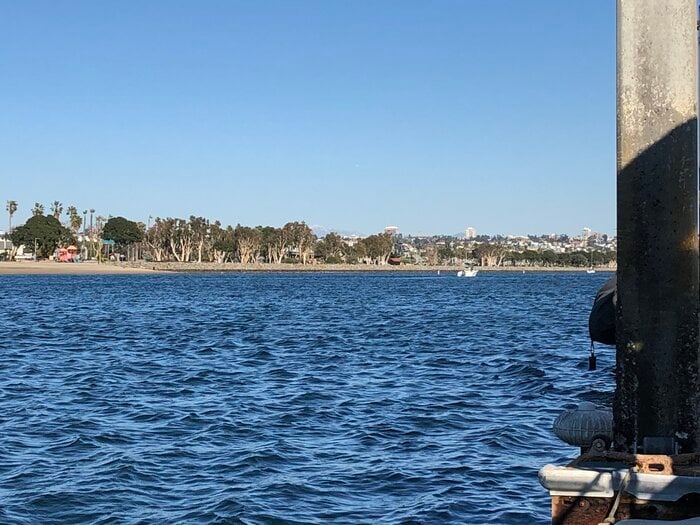 Nice. A day of fishing that we'd all be happy with.
Upvote 0

One hell of a trip, right on and congrats!
Toggle signature
Thanks for your report. Hook up! Cory
Reactions: Tunahead
Upvote 0
P

Nice job, thanks for the report.
Upvote 0

Thanks for the post and nice yellows! Glad to hear the weather was on your side this time.
Upvote 0

NICE YELLOWS and report Don, and glad you all had a great trip.

I was wondering if anybody was out fishing !!!!!
Upvote 0