Offshore Good Luck on the Fortune

We left Fishermans at 7PM from the right of the ramp while the PQ anglers boarded from the left.
PQ returned with 22BFT for 34-40 anglers. Fortune 23BFT for 16 anglers. 20BFT 60-130#, 5/20 100# and 3BFT 30#+/-
It was my first time on the Fortune and it won’t be my last. On the exterior its a bit tumbled from the years but from my 40+ years gems expert opinion it’s a diamond in the rough. We made the run to the tuna grounds in 10.5 hours arriving around 6AM and within 2 hours of searching Cap Jeff put us on a school that wanted to play.
The BFT were marking 120-180’ and reacting strongly and quickly to scoops of dines being tossed over the sliding stern. 16 of us drop flyline and sinker rigged dines. I’m blessed and bit first , fishing #10 or 35# FXR SEAGUAR , 1/0 Charlie Brown circle, Avet MXJ Raptor on a Calstar GF850M. Feeling confident and in control this Bad Boy BFT Halloween spooked and 3/4 spooled me to just maybe 100 yards left on my MXJ before he finally stopped burning my drags and gave me a chance to turn his head and crank him slowly back in low. After 45 mins of battling back and forth I just wanted him in the boat sooner than he was willing to give up. It’s hard for me sometimes to tell my head and body what my heart knows especially when the adrenaline is on full tap. That is letting and allowing my gear and it’s settings do it’s job and being patient. My 50’ braid line mark was well wound into my reel so I knew I had this boy close and was overconfident in thinking it was over. I had my regular 30’ of fluoro topshot and about 10’ to my PR connection to go and plenty of gas in
my tank. When he unexpectedly did a violent head shake, then another more desperate or angry, at the same time as my last rush of adrenaline got me to mistakenly and impatiently pump and pull. And in that split second, there was too much pressure, my solid SD knot broke at the hook and it was game over for me instead…We learn from our mistakes and OPM, other people’s mistakes so hopefully somebody will learn from mine including myself since this is the third time for me this season making the same mistake!!! Be patient and trust your gear to do what it’s designed and built to do all the way to and through the finish line. Beaten but not defeated I landed a 80#er on a KB on my next drop. Later in the day I fished my first setup again and landed a 100#er because this time I fought with patience.

Baxter gets the Most Persistence Award or some might call the Most Desperate Award. In a plunker bite, you’ll swear that time doesn’t move or somehow it just crawls slowly, so after what seemed like endless hours of trying to get bit on heavier setups, he says #*!. Grabs his Old School Newell 322 spooled with 25# Izor 3X mono tied to a short topshot of 30# Opsin fluoro, #4 Blacktail circle hook and a Calstar 270 8H. He gets bit instantly and is in for a wild and painful at times long ride. Per his Apple Watch, 1186 steps later, 15 laps around the boat of going over and under 16+ others, 100 minutes almost to the second, to his persistence and credit he lands a solid and beautiful butterball 85#er.

Hero Award goes to I’m just the Cook ( see gif from Steven Seagal Under Seige) Steve. He hooked and handed off two fish. One to Tony whose had 6 open heart surgeries being born with congenital heart disease and counts every day as a blessing because he still needs two organ implants to survive and is lucky to be alive. Tony and Steve tag teamed that BFT for over an hour and together they decked a 80#er. Tony was able to catch a fish of a lifetime thanks to a good brother, Steve. Tony was thrilled.

8 guys didn’t get bit or catch a fish. That’s typical IRL BFT fishing. 3/8 were new while 5/8 were regulars at the BFT rail. Most common mistake for the 5/8 was tackle error. At least 5 BFT were lost because of thin or thinner gauge bait hooks that got bent, broke or poor hooksets.
It’s nice to get bit on the stealthier smaller hooks but you have to remember that the smaller hooks also come with smaller barbs and after extended time fighting a BFT these smaller hooks will slip readily and easily through the smaller hole the hook WILL make in battle. They’ll also bend and break. See pics. There’s been many a fish I’ve been able to pull my hook out of by simply and gently pulling with my two fingers after my BFT’s been decked. For BFT greater than 50# I’d go 1/0 and larger. Btw, Owner #4 Mutu’s are very close in size to other brands 1/0’s. Main Angler error was pulling hooks. Instead of letting the BFT run and counting to three as your line is peeling and singing sweetly some were hitting and slamming the brakes aka strike so the line would pop and hook would have no time to set and just pull out. No fun and no good.

Honorable Mention Award goes to Tokio-san. He’s 87 years old and he fought and landed what looked like a 87#er like he was a 40 year old fisherman.

BFT FEVER AWARD goes to Ryan and Nick who made the record setting speed record of 12.5 hours down south from their doorstep in Wyoming to the landing to chase the BFT. Those two are fortunately really sick…

Most 1.5’s get back to the landing at 6AM. Captain Jeff saw that most of us were geared up for jigging the nighttime big boys so he and his crew went the extra mile to put us on the fish. We went into double overtime, past midnight but we couldn’t find a school that would stick. Omar did get bit though but unfortunately this BFT was half fish and half train and headed nonstop straight to SCI. Our awesome 7 hour drift lasted from 8AM to 3PM and our 18 hour day E-Ticket at the rail was done. We got back safely, beaten, blessed and grateful at 10:30AM. He is good. 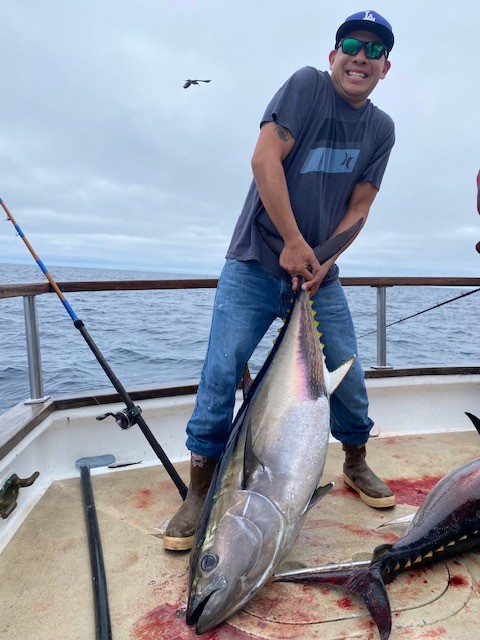 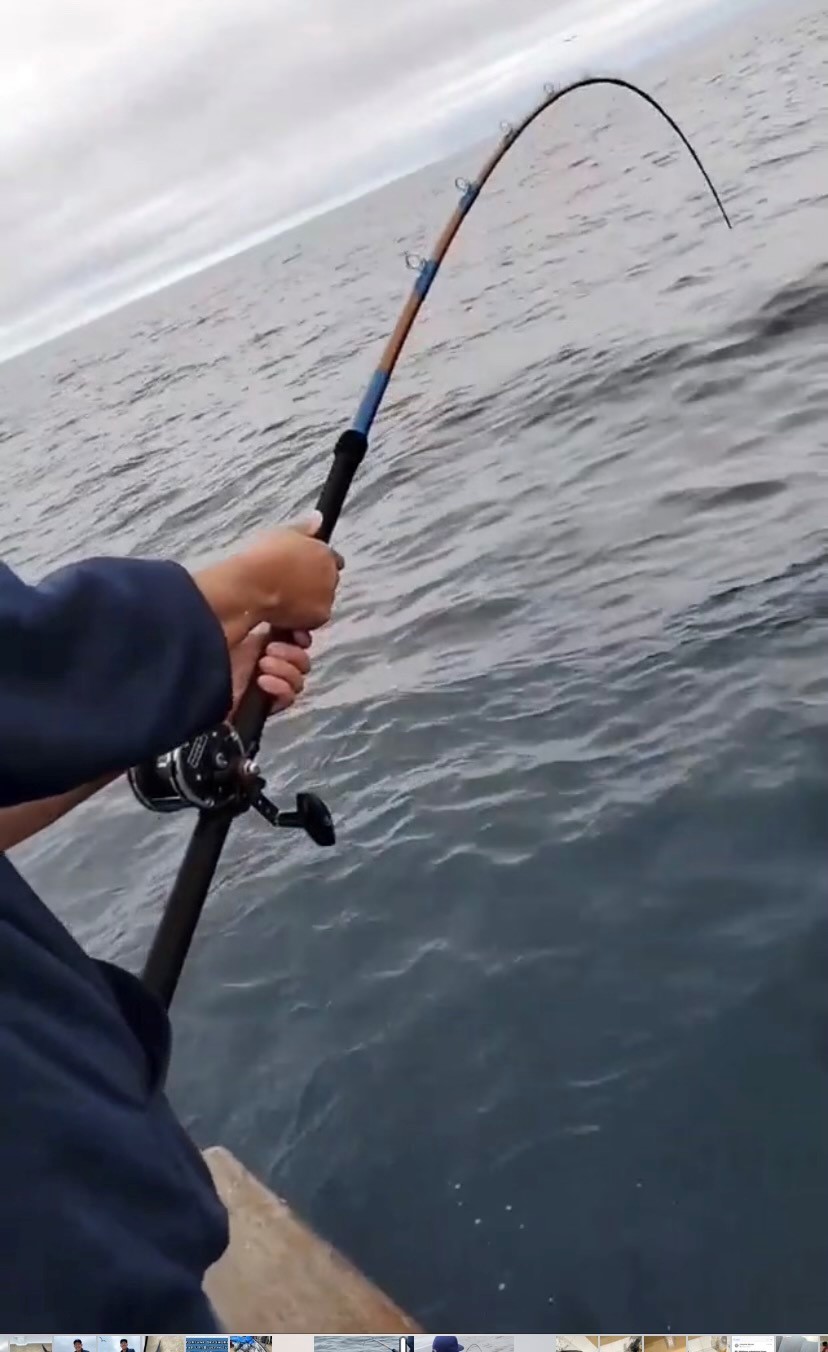 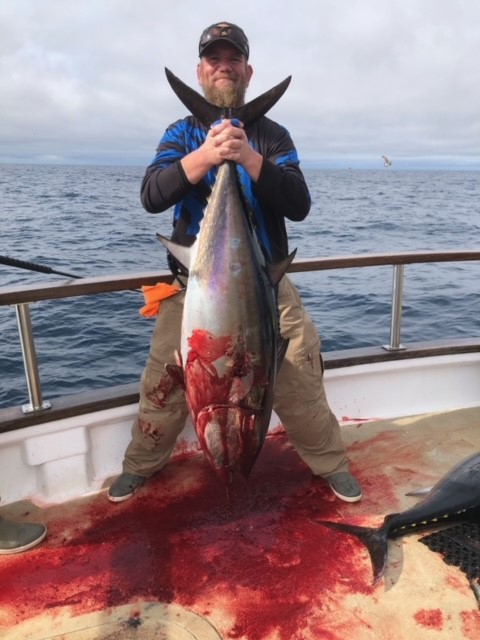 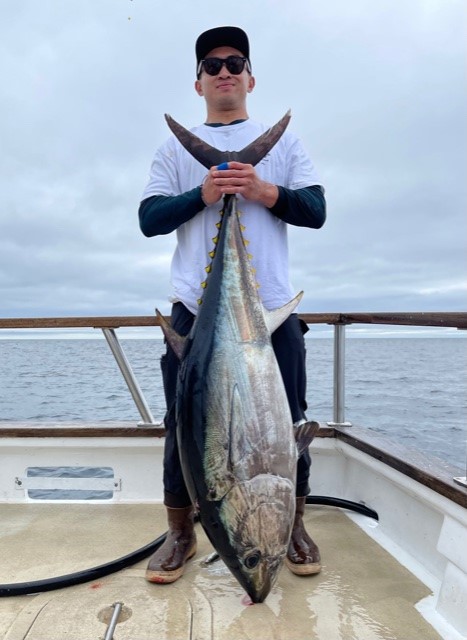 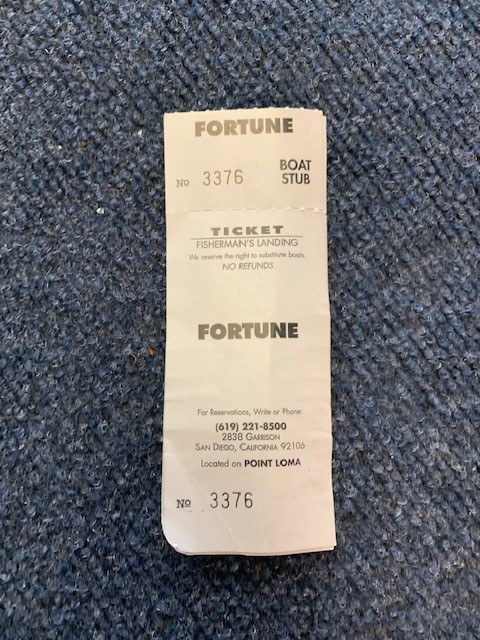 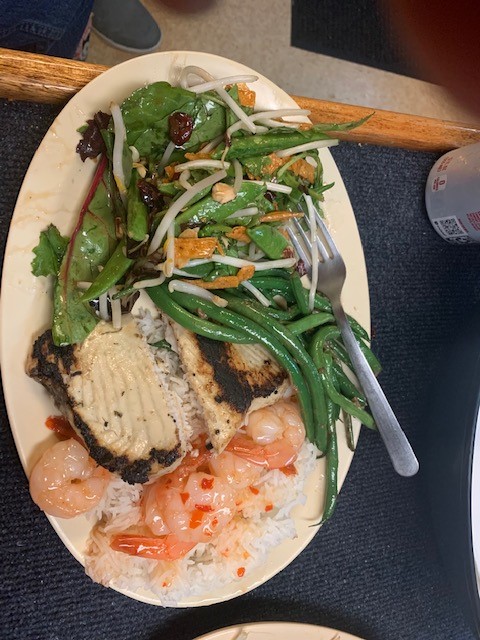 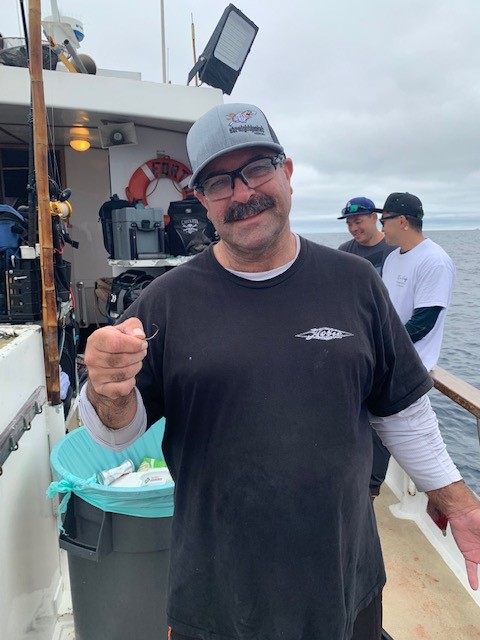 Great trip and write up. That food pic is ono! Is that swordfish?
Reactions: Tunahead
Upvote 0

Dolt Sniper said:
Great trip and write up. That food pic is ono! Is that swordfish?
Click to expand...

Awesome report as usual DT. Arigato!
Wish I could have made the trip down.
Reactions: Tunahead
Upvote 0

Been eating in too many LA restaurants. haha

I caught a nice one on 50 lb test and a number 2 hook a couple weeks ago on the Fortune. Jeff is on point. Steve’s food was great. He said he was going to feed us 4000 calories a day but you don’t have to eat it all. He hooked fish on my trip too. 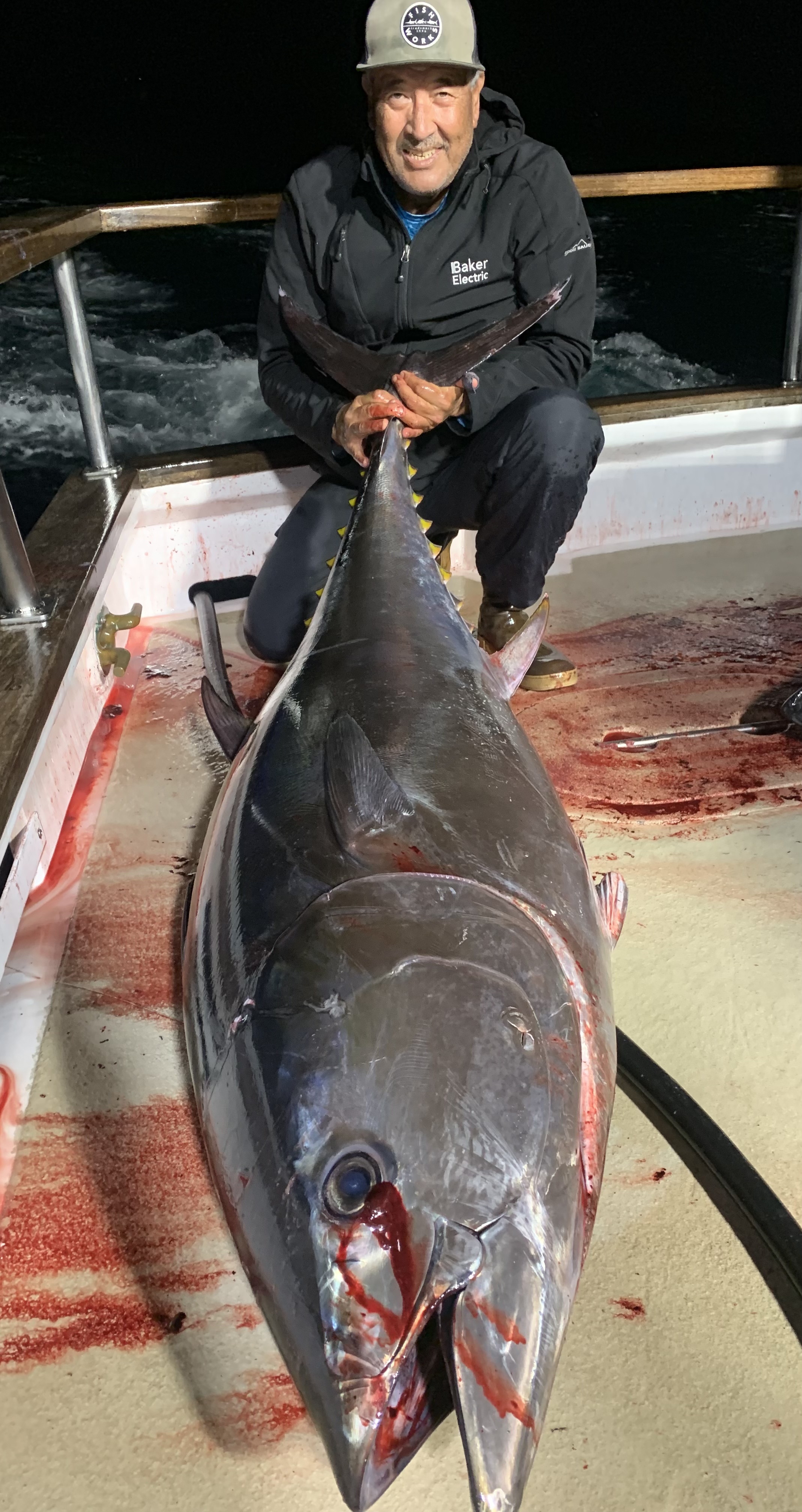 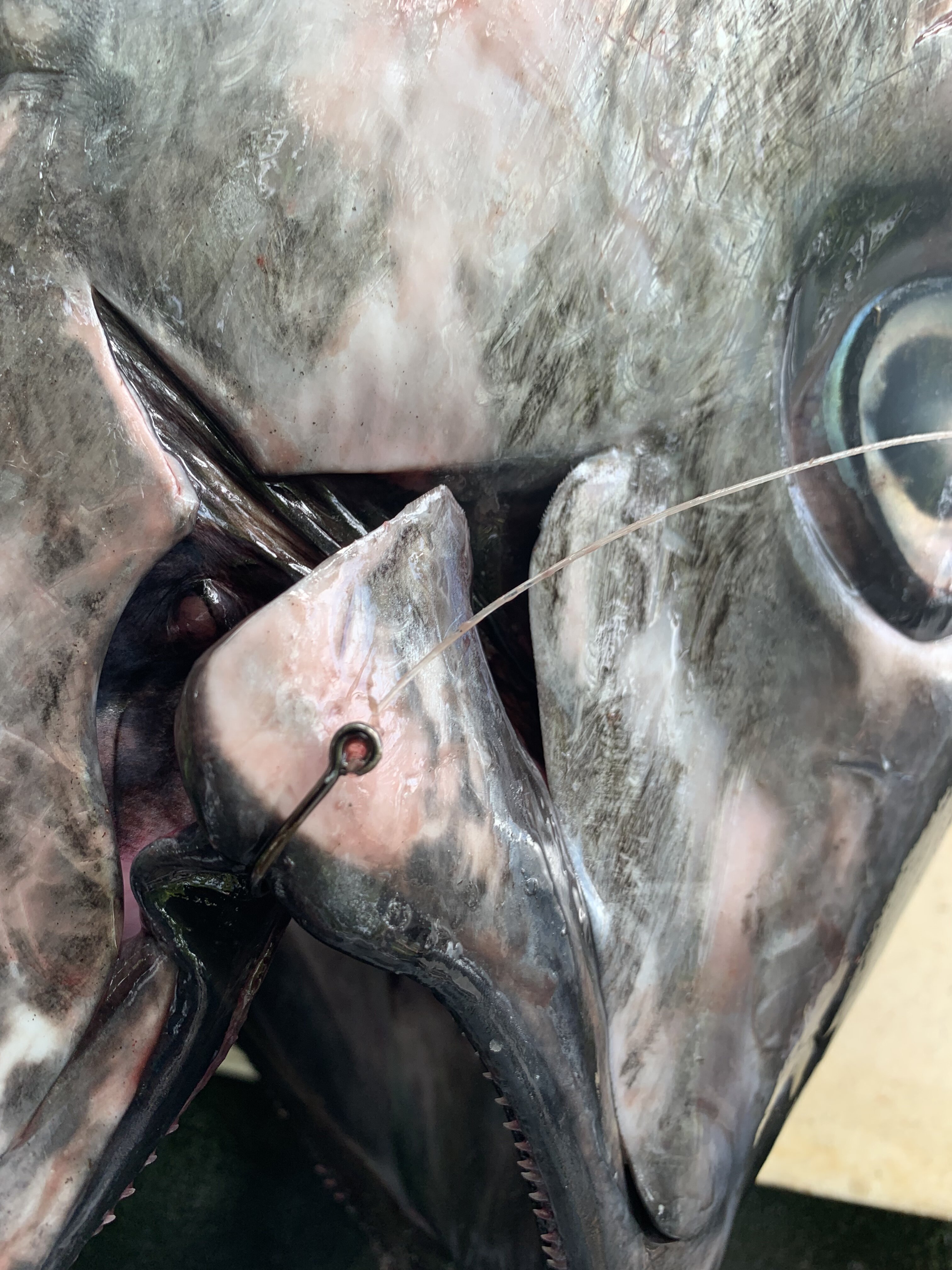 Great Report/Info/Pics Danny. NICE FISH all!
What a great read...took me thru lunch.

Those food pics make my A1C get giddy.
Glad you all had a great trip sounds like!
Upvote 0

caballo del mar said:
I caught a nice one on 50 lb test and a number 2 hook a couple weeks ago on the Fortune. Jeff is on point. Steve’s food was great. He said he was going to feed is 4000 calories a day but you don’t have to eat it all. He hooked fish on my trip too.

Offshore 12 Days of Christmas on the New Lo-An

Upvote 1
R
Offshore Back to Back 1.5 day trips on the Condor