Fri morning I took a look at the reservations on the Freedom trip fishing Sat. overnight and saw it had enough to go. As usual, I decided to go at the last minute. I had assumed they were planning to fish San Nic for cod, which I was really aiming for. Luckily I got some information later on before I left that they were fishing Tanner Bank... on an overnight! So, I switched gears and brought a little for BFT and codding. Yup, too much tackle!

Ten o'clock rolled around and the boat untied from 22nd St Landing and we headed to the receiver. We would find a mix of small sardines and anchovies. Oh boy, it's gonna be light line time. Next we all gathered in the galley for Capt Tino's update of what we were to expect. We were to look around for tuna first thing and if they bite, continue that plan. If not then go codding and then hit the high spot for maybe some yellowtail.

By daylight we arrived at the bank to join several other sport boats that were either on 1.5 or multi day trips. I believe we were the only overnighter. For the first few hours the capt. saw bluefin on the meter and we also saw visual jumpers constantly. But after only hooking a few deeper biters, we opted to hit some bottom spots. Tino informed us over the PA that he had accidentally found this rock that was loaded with giant reds on a previous trip. YES, that's what I was looking for!

So, first drift on this new spot with a 6 oz Jax jig and low and behold, there they were! This is probably the biggest red I've ever caught! A big gaffer! Was I stoked? Beyond! 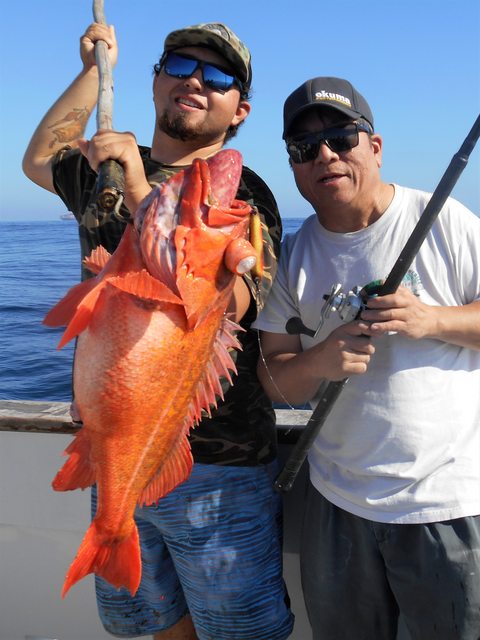 My buddy Ed and I were talking about bouncing jigs for big cod before we hit this and I told him, now is the time. 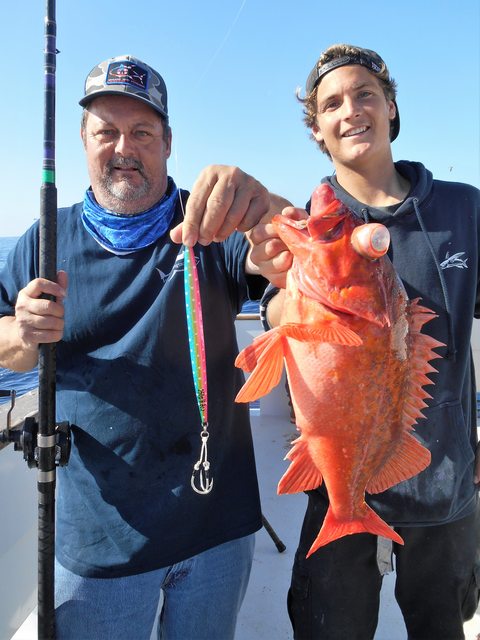 Crazy quality! I would have been happy with the size of the one in my right hand! PB red for sure. 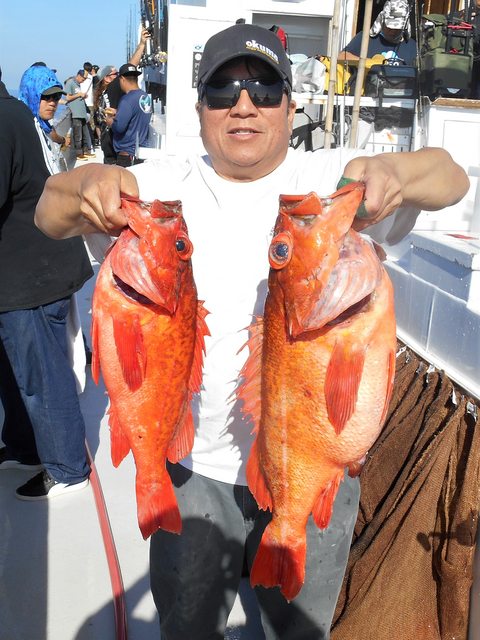 We loaded up on the bottom fish until they stopped biting. Next was hitting the high spot for whitefish, sheephead, or maybe even some yellows. As we pulled up to it, the crew was told to "salt it up" with some chum. I saw some boils and grabbed my jigstick and landed 3 yellows. I was a happy camper! After a little while of doing this, we were running out of time. I knew we were just about to head for the barn.

Capt remarked that if we bumped into anything, we would stop and fish it. I was honestly not optimistic at this point. He added that there was no trip tonight so if we had to, we could stay late. His prophecy would later be fulfilled.

As the boat pointed toward the dock we were now headed back but still in the area of the bank. Tino suddenly came over the PA and said "Braille bait! Braille bait! Massive school here!" I said HUH? 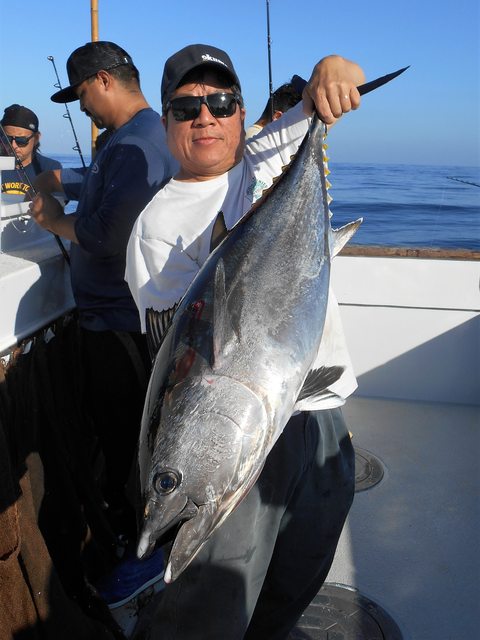 When all was said and done, we fished until dark and still 75 miles from the dock. But we had LIMITS from that stop. 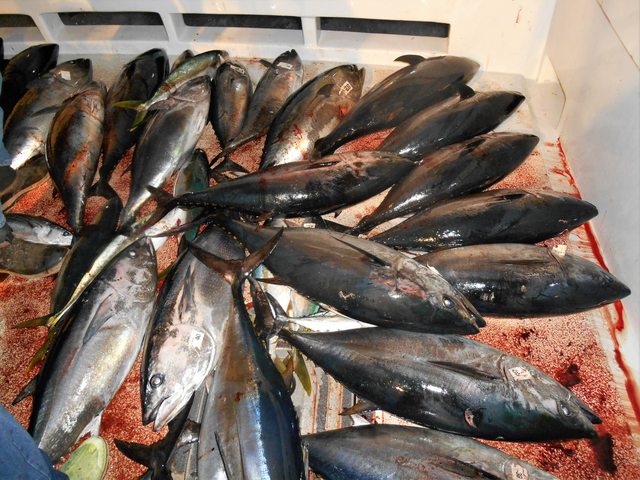 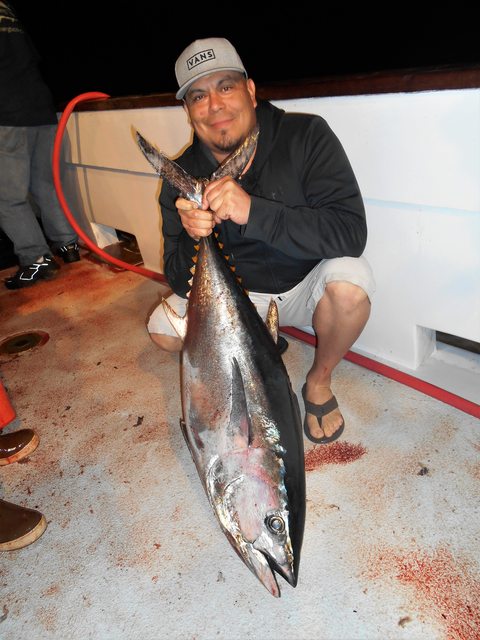 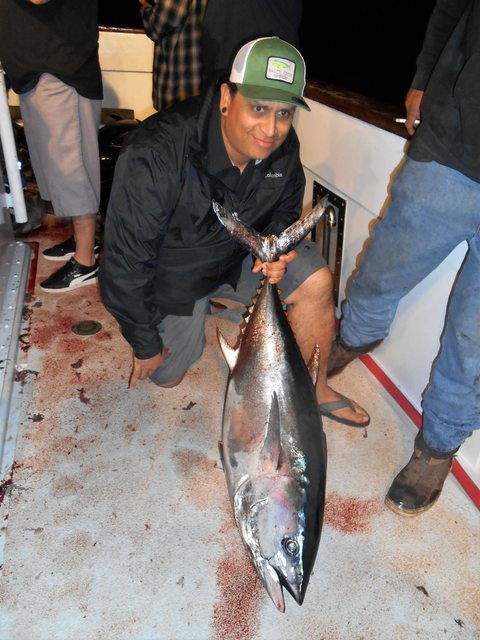 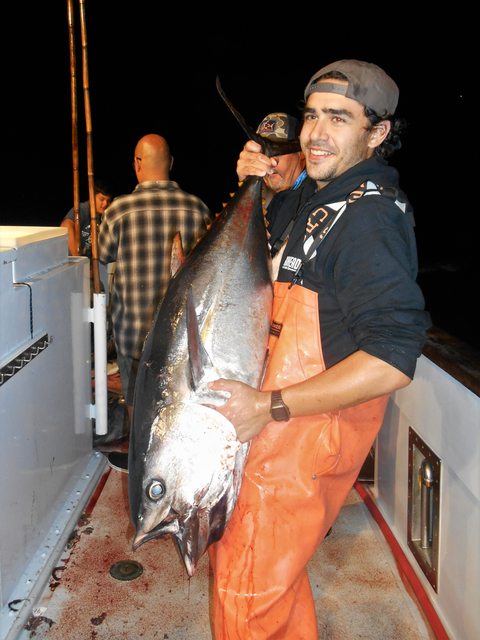 The reality was that we would not get back to the dock until around midnight. Our overnighter had turned into almost a 1.5 day trip thanks to the persistent effort by the capt. and his crew. They went above and beyond what any one would expect from a trip like this. Can't recommend this operation enough!

It's the end of Nov and the fish are still biting. So get out there!

Thanks for the timely report!
Reactions: Tunahead
Upvote 0

The only way to know is to go!!! Glad you took your opportunity and got out. I'll have to try the Freedom sounds like a good captain and crew.
Reactions: Tuna Dreamer, terryc. and Tunahead
Upvote 0

That’s the trip we all dream and hope for Sherm! Those reds were enormous, and the fact you tallied up a serious trifecta on an overnight gone 1.5, I would say that crew was worthy of some good tips!

Were you using a surface iron for the yellows? Were the schools pretty big that came up boiling or was it just a couple of really well placed casts?
Reactions: Tuna Dreamer
Upvote 0

That's awesome what a great trip for the end of Nov. congrats !!
Reactions: Tuna Dreamer
Upvote 0

Love the Freedom! Thanks for a great post.
Reactions: onehottip
Upvote 0

Zika said:
That's awesome what a great trip for the end of Nov. congrats !!
Click to expand...

Tino is a blast to fish with,
He is good at telling some people to get with the program, and work together,
If you’re thin skinned, then you might
Not like him, but he is old school, and I love it.
Reactions: artaka1, Tuna Dreamer, Noah & Scoot and 1 other person
Upvote 0
4

Great post! Wow talk about a "variety" trip, that's about as good as it gets! Congrats to you!
Reactions: Tuna Dreamer
Upvote 0

The boat was my fist tuna trip in 1976 for Albacore I did not know what I was doing at that time and still had some fish home. I had been last tie on overnight 9/29 this year and we fished Tanner for BF 38 BF or 34 people on 1day very small window to fish I got 3 big one may be 40 lbs . It s a top boat in L A
Go fishing
Steve P
Upvote 0
R

fished with Tino on the Outrider out of 22nd street in '19, that dude fishes harder than anybody- you had an epic trip, nice!
Upvote 0

Hell Ya Sherm ! That's the trip you were looking for ! And you got a chance to Smash Em Too !

Called in the Aztec before they took off. Epic send off! Thanks guys!
Reactions: artaka1
Upvote 0
Show hidden low quality content
You must log in or register to reply here.