Fishing Trip from heck, not quite from hell, but close

Sometimes you just have trust your gut instinct and stay home.

Short story: took my son fishing and lobster hooping at Catalina for a few days starting last Thursday. Bonito limits to 8 pounds and a good lobster crawl for 2 of the biggest bugs I have ever caught cut short by boat gremlins, DFG/Coast Guard boardings and high winds. Sorry, no pics.

Long story: Checked the weather forecasts, Thursday and Friday looked great with maybe some NE winds Saturday afternoon. Figured we come back Saturday before the winds started. First thing in the morning, I break off the key in the trailer hitch lock. Strike one. We get to Catalina, no problems , glass smooth ride and no wind. We are not there more than 10 minutes when here comes the Coast Guard for a safety check. Show them all the required gear, but somehow my fire extinguisher got discharged in route. Fortunately it was covered, so the spray does not get everywhere. It’s still cold from discharging when I hand it to the officer. Strike two. He’s really cool and offers to escort us into Avalon to purchase a new one, and lucky for us Chets Hardware had one left. The CG gives us the yellow slip and we go on our way.

We catch a bunch of nice bones to stuff the bait cages and go hooping that night. 2 hours, nets full of shorts and giant spider crabs. We did scrape out 2 legals, and one of them was a Lobstrosity. Called it quits because we were tired of dealing with the crabs.

Next morning, I check the tank and the smaller lobster is dead. No idea what happened, maybe it was a softy and got thrashed by the big guy. Strike three. We start to troll up more bones for bait and here comes the DFG. They have some girl trainee on board, and boy, are they going to show her how it’s done, and done thoroughly! They board us and search the boat from top to bottom. We being some of the good guys are totally legal, but it takes them 30+ minutes. They wish us good luck. Boy, are we going to need it.

So that night we set out hooping again in great conditions. We are getting legals in every net and less crab as well. I go to shift the engine in gear and it stalls. Turn the key, nothing. I shift it back and forth a few times and finally it engages and I am able to start the engine just before we drift into the kelp line. I figure the neutral safety switch is not aligning properly when the shift position is in neutral. I don’t want to be out there at night like this, so we pick up the nets and moor up at Whites. Turn on the weather radio and hear the winds may start in the morning instead of the afternoon, but I can’t risk crossing at night. Strike four.

The next morning, its howling 20 knots and 4 foot wind chop coming directly out of the north right in our face. So now I’m worried about getting home with engine issues and high winds. We start across, but it’s too much so we head to Avalon. When we get there, the Harbor Patrol starts berating me about having bad judgment being out there that day. Strike five. I tell him the story and he eases up.

He gives us a mooring and we go in to pay for it, and I make a donation to the Tim Mitchell family, the HP officer that was killed a few weeks ago. Sad. After lunch, the wind dies down almost completely, and HP comes by and tells us there is a window to go and that it’s going to be blowing harder the next day. There is still a big swell coming directly into Avalon, but we decide to go for it, because the engine has not stalled again when shifting. So we start out about 3 PM, having to do only 7 knots to avoid getting pounded, but it’s not bad without the wind. About half way back the wind starts kicking up hard, and our ETA is after dark. Not good. Now it’s really howling, but we make it back into the harbor safe. The wind starts mellowing out, and I figure we are home free. Wishful thinking. As we near the dock, I shift into neutral to slow down. The engine dies and the tilt trim does not work. Strike six. My son breaks out the paddle, but the wind suddenly picks up again, pushing us away from the dock. We throw out the anchor, and I try for 30 minutes to fix the shifter. No dice, it’s really broken this time. Strike seven.

So now I try to get Vessel Assist on channel 16. No answer. Finally the Sheriff picks up, and we’re right in front of them. So they hook us up and tow us over to the dock, 30 feet away, laughing the whole time.

Now we have the boat on the trailer, but the trim is not working. So we consult the engine manual and find the engine can be tilted manually if you turn the release valve 3 times. Not. We mess with it for another 30 minutes at every conceivable position, but it just won’t release. Strike eight. I consider cutting the trim power wires and hooking them directly to the battery to bypass the switch, but then I came to my senses.

So now I decide to just leave the engine down and tow the boat home at a crawl, so the keel won’t scrape on the road. This went fine, and we made it home, but it’s really late and I forgot to call my girlfriend and she is hopping mad. Strike nine.

Anyway, we did manage 7 large lobsters to not make it a total loss! And of course, there was hardly any wind the next day.
Last edited: Jan 27, 2015
Expand signature
Go ahead, make my day...

Reactions: medic, 2small, Bigfishhateme and 13 others

'cept I ain't got no girlfriend.
Expand signature
C-Ya

DAAAAAmmnnnnn. Sorry, but some of that was funny. Glad you made it back ok. Sucks when shit just happens.

Put on this earth, to call out ,ASSHOLES!
Reactions: Chad Skowron, peteking, zd583 and 2 others

Great report, Mike. Wow did you pay some major dues. Not to mention your son getting major experience. Coming back into the harbor at home must have felt like major relief after crossing that channel. The channel can turn nasty without warning and she can be a relentless bitch!

Maybe time to have someone give that boat a thorough look-over.
Expand signature
Wag More, Bark Less.

Too funny, I should have gotten some pics. She had a pissed off look on her face the whole time. It must be my long hair.
Expand signature
Go ahead, make my day...

Glad your cup was half full instead of half empty..... Home safe and sound....
Reactions: johnnylite

Paddyman1 said:
Great report, Mike. Wow did you pay some major dues. Not to mention your son getting major experience. Coming back into the harbor at home must have felt like major relief after crossing that channel. The channel can turn nasty without warning and she can be a relentless bitch!

Maybe time to have someone give that boat a thorough look-over.
Click to expand...

Thanks, I appreciate it. Yes, the boats going in as soon as I can get the trim working! And yes, I was really relieved to get in the harbor, even though the comedy of errors continued. There is nothing more humbling then the ocean.
Expand signature
Go ahead, make my day...

I'd rather be fishing.

Heading out this week for a similar trip. hope we dont have your misfortune.

Cool report... at least they gave you 9 strikes without calling you OUT!

When it rains, it pours. Glad you made it back safely

It can go south - so quick. Sorry to hear about your trip. Way to hang in there and stay calm. How old is your son? That is also a HUGE factor....

Good read a little bit of a bummer with all the hassles but hey you got 7 legal bugs sometimes things work out in the end. Thanks for sharing.

Thanks for that. Things rarely go perfect. You got 7 bugs, spent time in paradise, spent time with your son, caught fish, it's all good.
I thought your stalling problem was going to be a wrapped rope in the prop.

Well at least you didn't reach the 10 count! Now you can get back on your feet and kick some ass next time. Thanks for the read, that was some funny shit.

When it rains, it pours... It seems that when stuff starts to go wrong on the boat, everything decides to sing-along and play too. Glad your safe. It's really scary when the boat won't start when you are hooping close to rocks!

Cool story! Chalk that one up.Experience is the best teacher.
Last edited: Jan 30, 2015

Geeeze! Glad you got everyone home safe!
Expand signature
Cya Tuna Vic
B

That was me as a boat owner. Funny thing is that I sold the boat and I don't seem to have those problems anymore. But, I can't wait till I buy my next one. Problems only fishermen understand. Glad you made it back and had some dinner to boot. Good job!
B

WOW...Very well written...glad I read this.
Did this all go down in your 1802?
Happy to hear you're all safe.
Expand signature
"ALWAYS speak to a man as if he were standing within an arms reach of your face."
"Remember, everyone is a badass from the comfort of their home and behind their keyboard."
"Dude, if you pride yourself on a post count in an internet forum you really need to get a life."

You were able to avoid the strike 10! Glad you got home safe.

"Relax" - Everything is going to be just fine!

Good job getting home. Your son now has some life experience you cant find in front of a keyboard.

Stay the hell away from me! Just kidding. What a suck ass trip with all of the malfunctions. Glad you made it back safe that is the main thing. sounds like my last trip to LB loosing a complete wheel off the trailer!
Expand signature
You gotta a ...WAR..FACE....AHHHHHH
Thats a...WAR....FACE!!!!!!

I was asked if I suffer from Mental illness? I said heck no, I quite enjoy it!

Been married 44 years and can give you one piece of sure advice.
For a woman to get "HOPPING MAD"
without considering all the misfortune you went through is a serious piece of work. Just imagine what you are in for when you really do screw up. Re-evaluation is in order.

Glad you got home safely.

Surprised that with all your other harassment you didn't run into these guys, too: 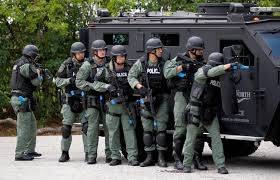